It's a competition that's been going on for a long time. Those who support either side are passionate about their choice in the footwear competition. We'll show you how to choose the right footwear for you, whether it's a flip flop or crocs. 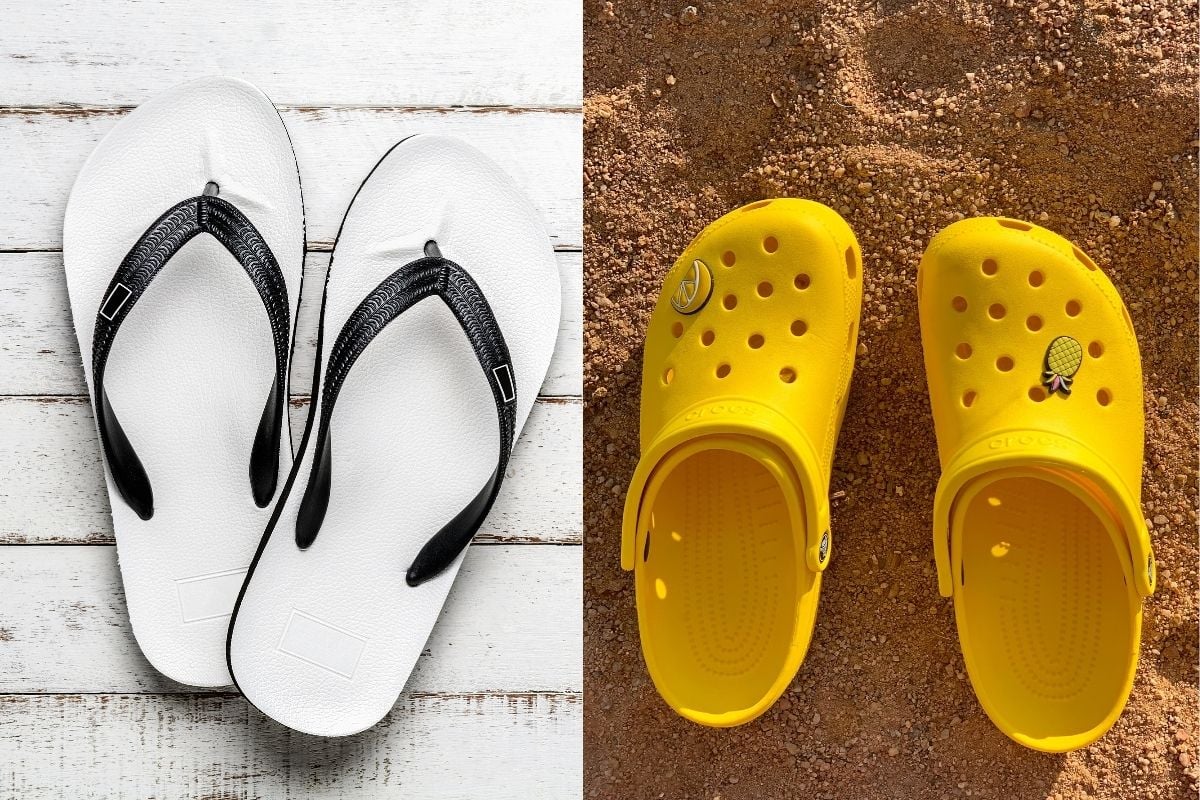 It’s a competition that has been raging on for years. Those in favor of either side are passionate about their choice in the race for best footwear. But what is it that makes these two protective foot coverings so uniquely different that there can only be one?

As someone who is from the southern part of the United States, I respect how important it is to be able to slide on flip flops and head out on a summer day. On the other hand, as a former retail worker, I can’t express how helpful it is to be supported when you’re on your feet all day long. So, before you automatically feel inclined to talk smack about Crocs or criticize the flatness of a flip flop, let’s take a walk.

Unlike Crocs, flip flops can’t help but endear themselves to us as a collective human race due to how long they’ve been in our lives. It wasn’t long after the dawn of time that flip flops were introduced to the culture, the Egyptian civilization to be exact.

These barely-there barriers to the ground came into existence around 6,000 years ago. Though they’ve taken many forms over the centuries, the basis of a bottom with straps atop has remained the same. Even so, let’s just say that we’ve come a long way from papyrus and palm leaves.

Related: Flip Flops vs Thongs – Is there a difference?

While Crocs don’t have as deep of a connection, they have been the butt of jokes for two decades now. Originally designed to adorn the feet of the casual boater, Crocs didn’t start out as controversial. In fact, they debuted at a boat show in Florida and instantly sold out. Their easy-to-slide-on and open format made them a great fit for outdoor coverage. The name even comes from the ability to adapt to multiple settings, like a crocodile.

Related: Are Crocs comfortable? Durable? Worth getting?

If The Shoe Fits, A Comparison 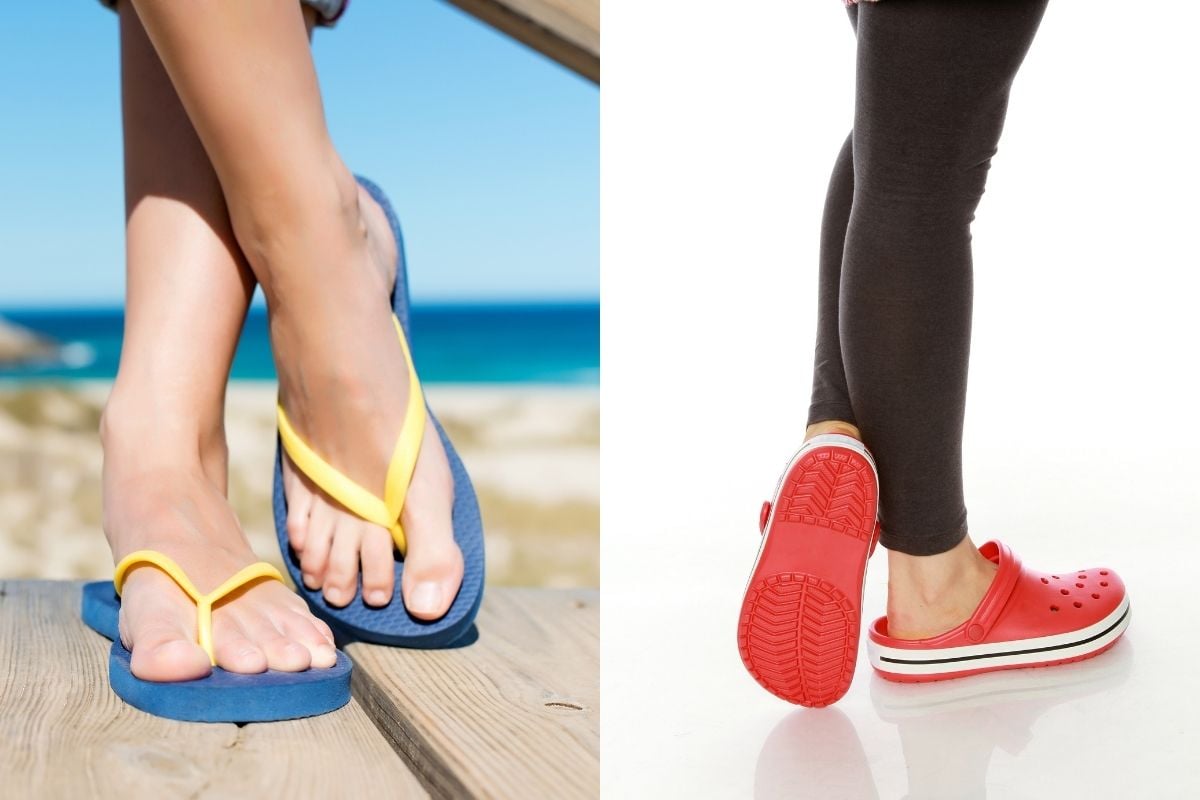 These two shoes have the basics of being shoes in common. That’s mostly where the commonality ends. No one would really be able to confuse the traditional pair of flip flops with a set of Crocs. Here are a few more features they share:

Now that we have a better idea of what these two share, let’s kick the ball into the outfield. What makes these types of shoes stand out on their own?

Knowing that you can find flip flops in the dollar bin kind of gives you a heads up on the type of materials that keep the shoe together. To be fair, there’s a wide range of flip flops that will offer you a quality walking experience and are produced by high-end brands. For the most part, though, you can expect the bottoms to be made from rubber or foam and the thongs of plastic or leather.

These, particularly the first three, are on the cheaper side and result in shoes that lose shape and wear out faster. Flip flops are also prone to plastic that snaps or comes loose from the holes.

On the other hand, Crocs are made from a resin called Croslite. This material comes with the benefit of giving the feeling of walking on a sturdy cloud. It’s a material that is odor-resistant in addition to having grips that enable the food to not slide out accidentally.

Flip flops are meant to be the least amount of shoe to still qualify as a shoe. The function is to be a quick and easy footwear solution. The best flip flops come with an outsole that has a solid grip and an insole that is textured to avoid a smooth surface.

What you don’t want is a slippery inside or outside that could cause an accident. You never know when you’ll be caught in a flash storm while innocently enjoying a flip flop day, as many a stubbed toe could attest. 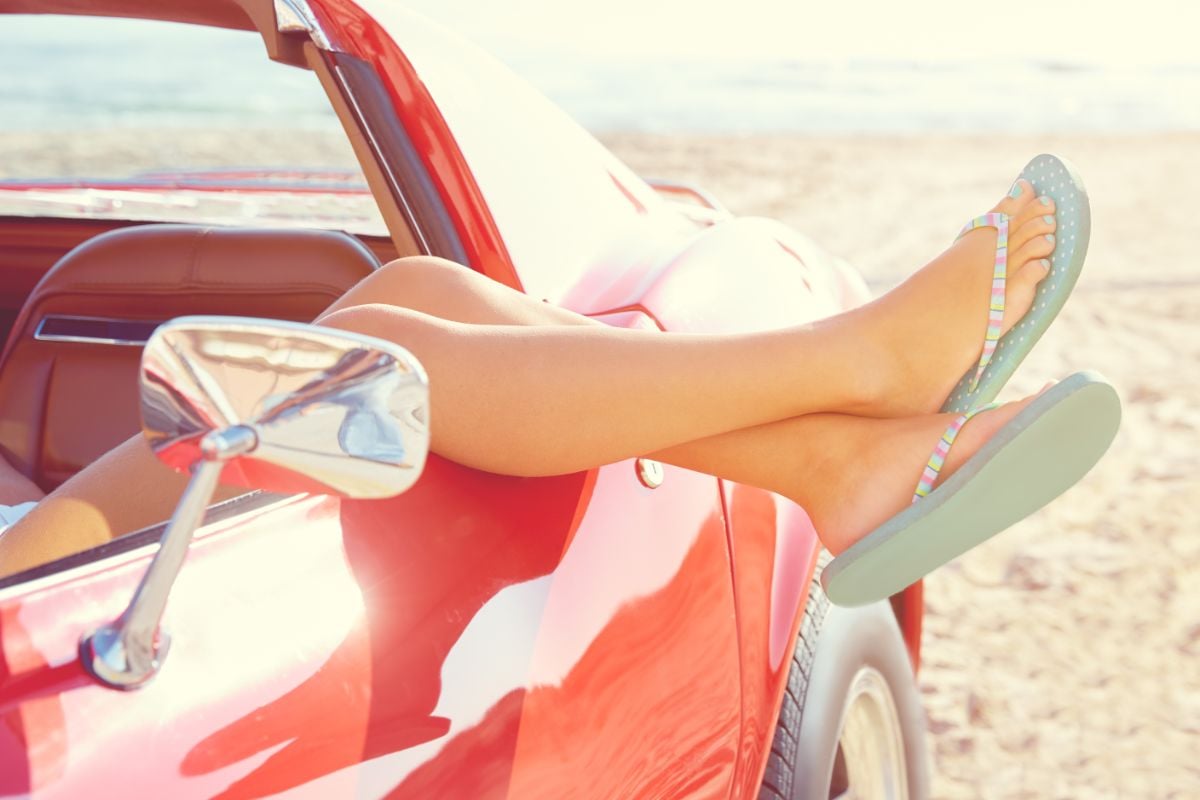 Crocs are designed to go easy on the feet, which is why many professions that require long days running around are using them. What you may not know is that they have exactly 13 holes. These holes keep moisture from building due to the airflow.

You can also use them as decoration opportunities. The same brand sells charms that fit snuggly in the holes called Jibbitz. This add-on comes in a variety of shapes, from rainbows to slogans.

As mentioned, flip flops are the ultimate bargain shoe. While you can get them as cheaply as $1, you should expect to get a good pair at any major retailer for about $10. Want a designer option? You can pay upwards of $700. If you’re really extra, you could spring for the pair by Chipkos that resulted from a collaboration with artist David Palmer. These would cost you a cool $18,000.

For the classic Crocs clog, you can expect to pay a range from $35 up to $65 and the flip flop version made by Crocs comes in at around $30. Jibbitz range from $5 up to a whole pack for $30.

While Crocs cost more, they will outlast several pairs of flip flops. Unfortunately, no one knows that better than our oceans. One of the most common types of items floating on the surface are flip flops.

On a positive note, there are efforts being taken to change that. Companies are acquiring these old soles and upcycling them into things like handbags, mats, and even new shoes.

Crocs can’t be recycled but they do have a program to keep them out of landfills. You can donate them back to the company and they will retread them for people to wear in developing countries. 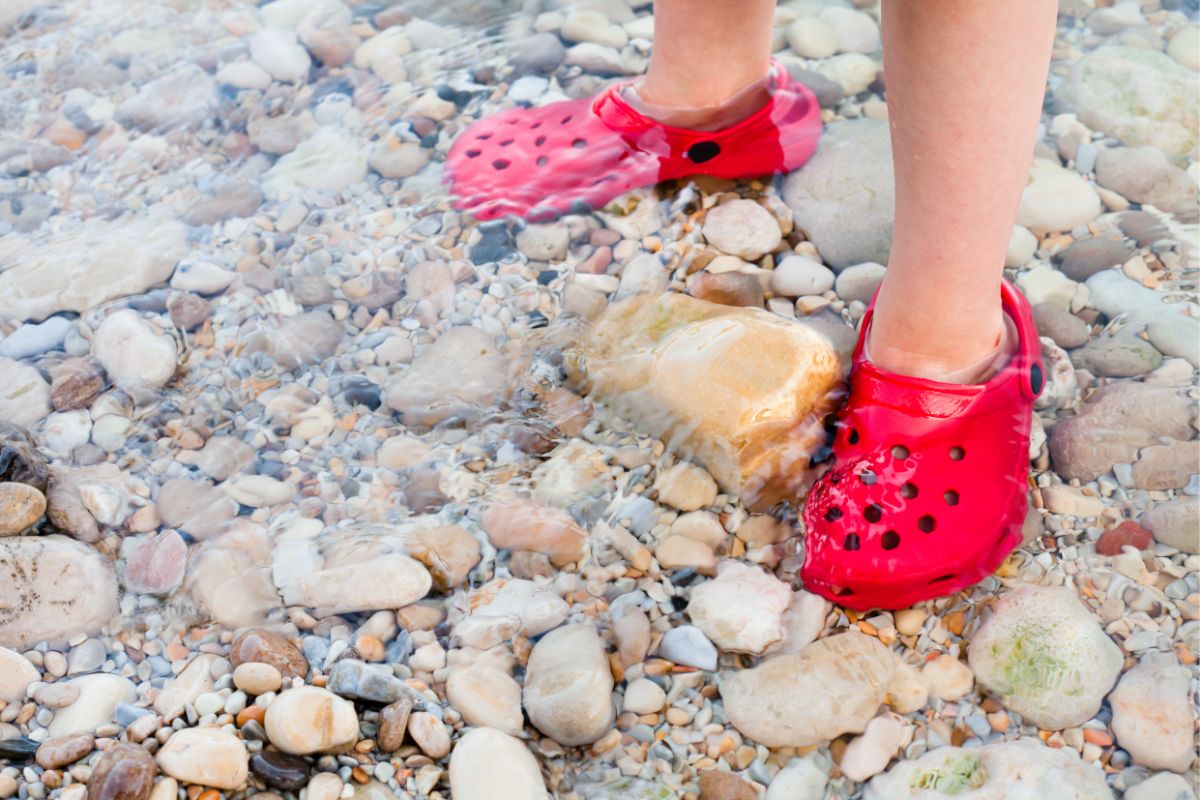 When it comes down to it, both shoe types have their place in decent society. Flip flops are great for just having something on your feet while you’re out in the world. Whether that’s at the beach or standing in line at the DMV. They are the zero-effort shoe, which probably speaks a lot to their longevity on the earth’s timeline.

However, I think it would be fair to view Crocs as a modern upgrade to the basic coverage of the flip flop. Like their convenience competitor, Crocs are effortless to put on and do their job to keep your feet from meeting the pavement.

However, the extra cushion of the latter means they last longer and provide the wearer with foot-friendly shaping to maximize comfort. They can be worn all year and much of that time can be without socks, due to the strategic holes that boost ventilation.

Sure, there are flip flops that cater to the foot arch and come with soles that are longer lasting. But at the end of the day, due to the enhanced features and durability, Crocs win out as the superior shoe.