If you want to give your feet a much deserved beach vacation, learn more about the different types of flips flops so you can choose the best for your feet. 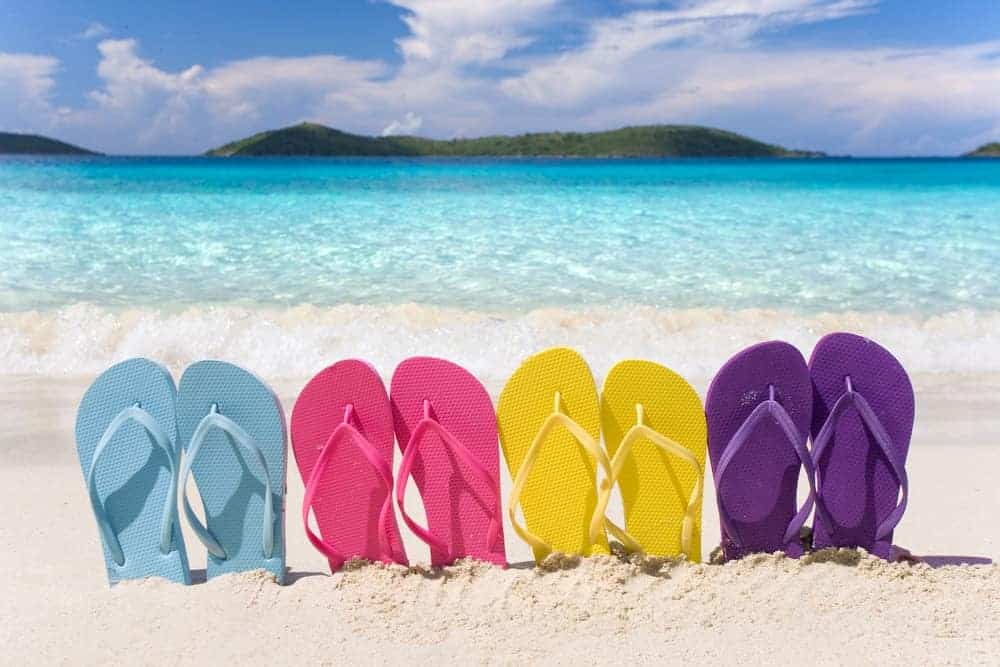 You wear them on the beach, in the shower, at the pool, to the store, and around the house. You’ve probably worn so many pairs of them in your life, you can’t even begin to guess the number. And you know you’ve got at least one pair in your house somewhere right now.

They’re flip flops…and they’re everywhere. But when you really start learning about the different types of flip flops and how long these types of sandals / footwear have been part of the fashion world, you’re going to be stunned.

The Long History of Flip Flops

They’re a pretty simple design. At first glance, you may think there really isn’t a whole lot to say about flip flops. After all, these shoes are simply a sole roughly cut to the shape of a foot with a single thong near the middle top section of the shoe. The thong branches out in two in a Y-like shape to connect to each side of the sole. Simple, right?

But flip flops are a huge fashion staple for a reason and they’ve been a big part of popular style for way, way longer than you probably think. In fact, flip flops are such an ancient design that no one even knows who invented them or when.

Flip flops are a very simple style. That’s probably why they were actually one of the first and oldest shoe styles ever invented. That’s right. Flip flops have been around for so long, they were actually worn by ancient Egyptians and date as far back as 4,000 B.C.E. Cleopatra herself wore flip flops. Now, that’s some pretty good style clout in the fashion world.

Today, the most common style is to wear flip flops between the big toe and the second toe. This wasn’t always the popular fashion choice, however. In ancient Rome, it was popular to wear the flip flop thong between the second and third toes.

Setting Trends Through the Ages 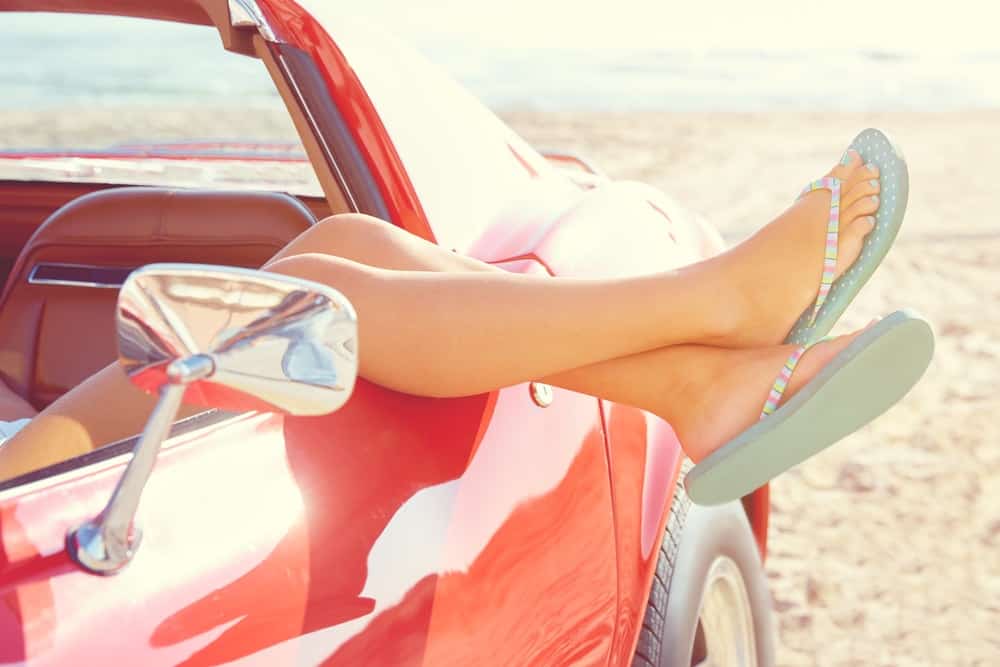 While flip flop style is at least 6,000 years old, the name definitely isn’t. Flip flops didn’t have their official name until the 1960s and they didn’t become a popular style in the U.S. until the 1940s. The rest of the world, including the ancients, discovered the joys of wearing flip flops long before it became part of American fashion. The name of this shoe style comes from the sound they make when you walk in them: flip, flop, flip, flop.

Soldiers returning home from WWII brought flip flops with them from Japan, where the shoes were still extremely popular. Made from rice straw and worn continuously since ancient times, Japanese people called their flip flops “zori.” The shoes were a hit with American women, especially after American manufacturers replaced the rice straw with rubber.

Because they’ve been worn for so many centuries across cultures all over the world, flip flops have been made with everything. In Egypt, they were made with papyrus and reeds growing near the fertile Nile River. In China, they were crafted out of rice straw. People in ancient Africa used animal hides to make their flip flops.

But it was the rubber that turned flip flops into a durable, go-anywhere shoe. Modern technology gave the ancient design a modern look, and manufacturers began churning out flip flops in multiple colors and patterns to make them a fashionable choice for style mavens.

Since then, modern flip flops have been a standard of American style and fashion all over the world. In the shoe world, flip flops are a type of sandal. In fact, they’re the best-selling sandal in the U.S., generating about $2.5 billion in revenue for shoe manufacturers every year. 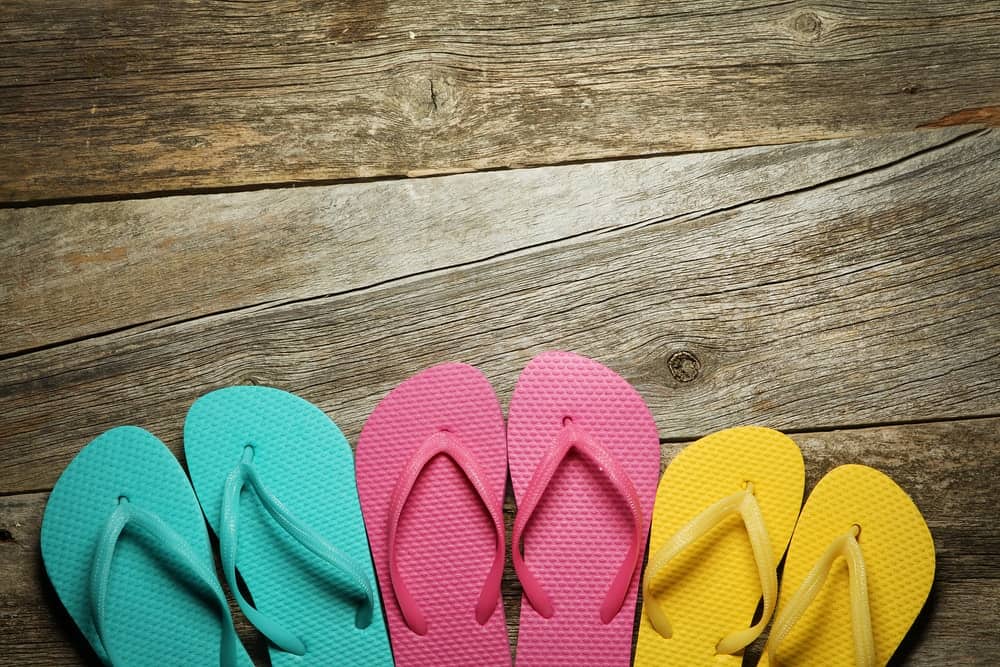 Flip flops have certainly been around long enough for designers to play with this style.

Wedge heel flip flops give you some extra lift. These are simply standard flip flops that have a wide wedge heel, which can be anywhere from half an inch to several inches high. You can also get heeled flip flop designs that have a standard skinny heel at the back of the shoe.

Not every style expert agrees on which shoes are actually flip flops.

Slides are not traditional flip flops, which is why some fashionistas say these are a different shoe style altogether. However, there are plenty of similarities. Slides do not have the distinct Y strap seen in flip flops. Rather, they have a single, wideband that fits across the top of your foot.

Birkenstocks are also a controversial addition to the flip flop pantheon because many argue that they stand alone. These are a German sandal made with a sole that contains cork. They have an open back like flip flops, but the top straps are a bit more complicated. Birkenstocks have the same slip-on style and simple sole shape, which is why some consider these to be flip flops with more complex straps.

Are Flip Flops Good or Bad for Your Feet? 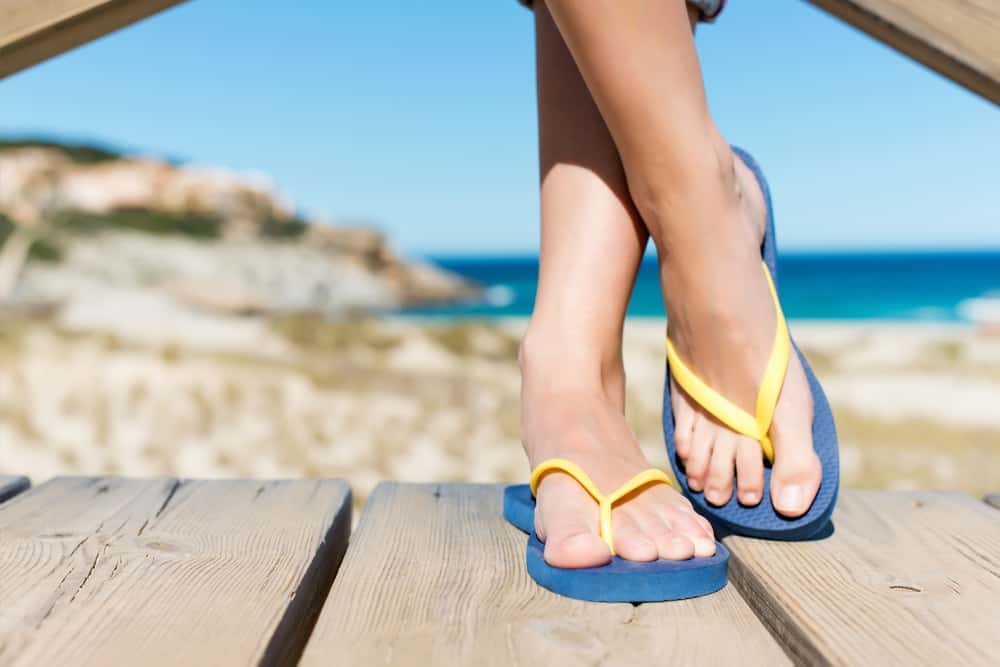 Flip flops are inexpensive, easy to wear, and available in all kinds of colors. It’s easy to grab a pair and go. They’re simple, they’re comfortable and they’re worn by everyone. So there really can’t be anything wrong with wearing them, right?

Wrong. According to foot health experts, flip flops are actually pretty horrible for your feet. Your muscles naturally react to the design of the flip flops and you unconsciously make adjustments to your natural stride to keep these shoes on your feet. This means that you’re using tendons and muscles in your foot to keep them in place. This can create pain in your feet if you wear flip flops frequently.

Most flip flops are made with a simple, flat sole that has no arch support. This also isn’t exactly ideal for your feet. These shoes don’t give you a lot of support or cushioning and they don’t allow you to step and walk in the most natural way, all of which can spell foot problems in the future if you wear flip flops a lot.

Because flip flops leave pretty much your entire foot exposed and have only a top strap to hold them in place, you really can’t do anything athletic in these shoes. Trying to run, play sports or exert your body while you’re wearing flip flops can lead to injuries and accidents. The shoes aren’t secured to your feet. Your feet may slip and slide on them, and that can cause you to get seriously hurt if you’re performing any kind of complex movement (and sometimes, even a simple one).

Flip Flops Around the World 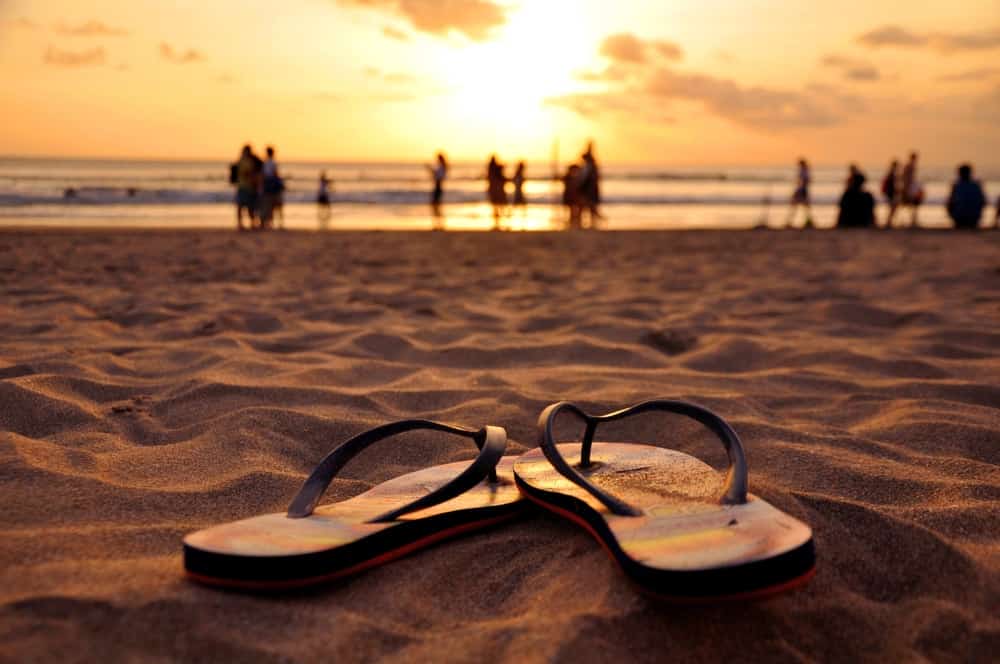 Within the basic design of flip flops, designers have found a lot of room to play with style. You can not only get flip flops in any color or pattern, you can also find them in highly embellished styles. Some flip flops have straps that are detailed with beads, rhinestones, or other little extras. Sometimes, the straps are made with braided or woven designs or made with cloth. You can get flip flops that are covered in glitter or find them topped with flowers right at the junction of the Y.

Anything goes when it comes to flip flop style and you can have a lot of fun with the look. This is one shoe that you can actually embellish on your own using ribbons, beads, or any crafting materials. Flip flops can vary in the thickness of the straps or the sole to change the basic look. You can get them made with any material and find them in any size.

They’re made to be worn by anyone and that’s why flip flops have pretty much been worn by everyone. Even high-end designers have released their own versions of flip flops. They’re some of the most versatile and recognizable shoes in the world. Stock up on flip flops and you’ll be ready to meet any style challenge.