Here's a fun fact sheet setting out 25 things you probably don't know about Holt Renfrew - one of a few iconic Canadian clothing retailers. 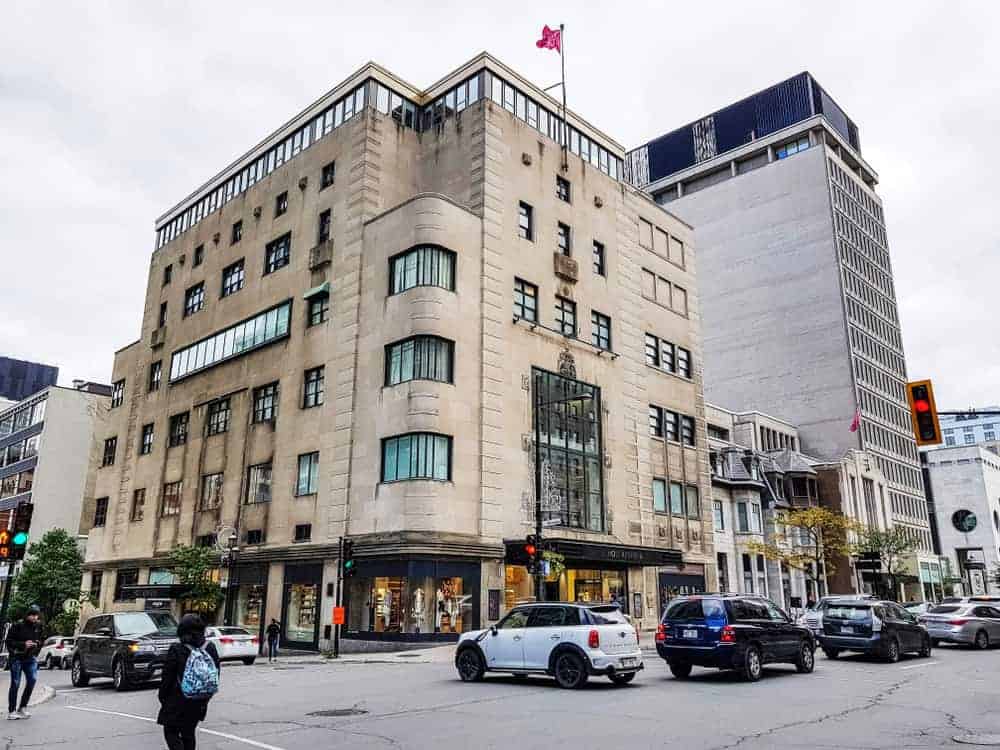 It’s a true Canadian success story.  Their Vancouver store is stunning and huge, located in the downtown core of Vancouver in the very popular Pacific Center mall.  Their other stores are just as opulent.

While Americans may not recognize the brand, most Canadians do.  If you’re looking to shop at Holt Renfrew, here’s a fun article sharing little-known facts about this iconic Canadian retailer.

1. There are 7 Holt Renfrew Stores Across Canada

As one of Canada’s leading high-end fashion stores, H. Renfrew currently operates nine stores in the country. These stores are widespread across Canada, having locations in Calgary, Edmonton, Vancouver, Montreal, and three stores in Toronto. Previously there were 9 H. Renfrew stores across Canada, but two of them (the Ottawa and Quebec City Stores) were closed a few years ago as part of the company focusing their efforts on other ventures.

2. The Company Began Before The First Store

Though the company was technically founded by William S. Henderson in 1837, this was before the first store was built. Henderson began the company as a result of the inspiration he got from his parents, who operated a fur shop at the time. In order to secure the materials necessary to begin his own business, he bought the interest in the shop of his parents and declared that day the official founding day of his company.

3. The Original Name Was Not Holt Renfrew

One thing you’ll notice is that the name H. Renfrew has nothing to do with William S. Henderson. This is because the company name was not originally H. Renfrew, but instead William Ashton & Co. This name was strongly tied to the first store that opened in Quebec, undoubtedly a reference to Henderson’s parents, whose previous shop also operated in Quebec City.

To get to the name it has today, the store would actually have to go through two more name changes, one due to taste and one due to ownership.

After the company had been around for 10 years, Henderson changed the name to reflect his contribution to the company, renaming it William S. Henderson & Co.

Eventually, Henderson would sell the store to his brother John, who would subsequently change the name to John Henderson & Co. The name Renfrew would only be added after the store gained the partnership of George Richard Renfrew, who would insist the store’s name be changed to Henderson, Renfrew & Co.

The store’s name would continue to change (and not settle on H. Renfrew until the addition of John Henderson Holt in 1900), but these initial changes affected greatly the course of the company. Only a bit over 20 years after beginning the business, the company started expanding its reach to international markets (namely Europe and North America). This hard work was rewarded when the company won awards from international exhibitions in Philadelphia, London, and even Paris, all notably prestigious cities to become well-known as a foreign company.

The success found in Europe would result in the company’s name being talked about all over, even leading to a deal to create fur items for the Royal Canadian family after the Prime Minster’s enthusiasm for the company promoted their quality nationwide. Queen Victoria would even go so far as to label the company “Furriers in Ordinary”, an incredible honor to receive from a royal figure.

7. The Company Was The Official Furrier For The Queen Of England

The royal appreciation of the company did not stay confined to Canadian royalty, though—at the turn of the 20th century, the British Queen Alexandra designated Holt, Renfrew & Co. as “appointed furriers”, meaning that they were given multiple royal warrants to continue producing clothing for the family.

Despite the company’s wide-spread success, the flagship store was not opened until 1937 to coincide with its 100th anniversary. This new store was the first store that H. Renfrew built that utilized a truly groundbreaking six-story structure. This was notable for the time, especially by a store that only specialized in a particular product.

9. The Flagship Store Was Modeled To Be In The Style Of Art Deco

The flagship store was modeled after the French style of architecture called Art Deco. Though different strains of the style took inspiration from specific elements of pastiche, the unifying factor between these approaches was the urge to create something that was distinctly modern, often using elements of the past to create a fusion of aesthetics. It was also very important during the 1930s, making the design choice an incredibly bold and contemporary one for a store that specialized in traditional elements of high-end fashion.

Within the Art Deco label, the flagship store’s style was referred to as Streamline Moderne, a subgenre of the movement that focused specifically on long lines and architectural elements that were reminiscent of submarines and ships.

During World War II, the number of materials that had to be rationed and controlled changed the way the public viewed shopping, with a distinct attitude change towards high fashion in particular. H. Renfrew adapted to this by having higher hemlines and shorter sleeves on new products, emphasizing the need to conserve during the tumultuous era.

11. In A Post-War Environment, H. Renfrew Strengthened Their International Ties After the war ended in 1945, the company did not haste in making sure that its international ties were still intact. In fact, within 2 years, the president of the time Alvin Walker signed a deal with Christian Dior to begin selling their luxury products at the company’s stores in Canada, something that was a bold move and allowed people to have better access to some of the most top-notch products available in the fashion industry.

12. A Top-Notch Luxury Dealer By The Mid-20th Century

As soon as the mid-20th century hit, H. Renfrew was already well-known as one of the top retailers of high fashion internationally. Their relationship with Dior (the most famous fashion designer at the time and still one of them, by contemporary standards) opened new doors to work with Italian designers such as Fabiani and Visconti. These new partnerships helped solidify H. Renfrew’s status as not only a reliable Canadian brand but also a destination for people from all international backgrounds.

13. The Company Had Continual Shifts In Ownership

One of the aspects of the company that hasn’t ever really changed is the continual shifts in ownership that affect how H. Renfrew has been run. This changed once again in 1967 when Alvin J. Walker stepped down in favor of Lenard M. Shavick, who sought to ensure that the company’s international ties would stay strong amid the continuing post-World War II environment.

14. The Development Of The Toronto Flagship Store Was $6.5 Million

In 1979 the first flagship store in Toronto was renovated at 50 Bloor Street West to the tune of $6.5 million. This pricey budget would accommodate the store’s over 73,000 square feet of retail space, an exceptionally elaborate store plan for the time.

15. The Edmonton Store Was The Tallest Building In The City

At the time of its construction in 1983, the Edmonton store of H. Renfrew would be known as the tallest building in the city, a notable achievement among the increasingly demanding size of metropolitan area skyscraper standards.

Despite its roots and continued reputation as a distinctly Canadian company, H. Renfrew was actually owned by an American for a good period of time. The owner during this period was Carter Hawley Hale, who would go on to sell his shares of the company in the mid-80s. This would be the signaling of the company’s return to Canadian ownership.

When re-designing the Toronto flagship store on Bloor West Street, the company knew that it would have to hire somebody who had a modern and creative sense of style and progression. Looking to the USA, H. Renfrew hired the New York designer Naomi Leff, an influential figure in her field who was known for designing retail spaces. She would go on to oversee the renovations of the new building and also offer input to the specific range of products they would be selling.

In the early 2000s, the company would attempt again to operate its “Holts” magazine, something that had been previously tried without much success. The magazine wouldn’t change much about the formula at first www.cmtrading.com, offering a catalog of the store’s most interesting and recent products, but would eventually be changed in 2006 to have editions specifically catered to men and women.

The most recent store by H. Renfrew was built in 2007 in Vancouver. There are no current plans to build new stores at the moment, but the Vancouver location serves as a modern way for consumers to interact with the company’s high-end selections in an accessible manner, given their increased presence on the West Coast of Canada.

20. Despite Their Success, H. Renfrew Has Ideas About How To Do Better

Renfrew has been a leading company in fashion for almost 2 centuries, but this doesn’t mean they don’t have ideas about how to improve their business. The company has directly addressed this by saying that they want to expand their reach to target more men-oriented methods of marketing and products, citing this as one of the areas in which they can seriously improve.

Since opening its doors in 1837, H. Renfrew has celebrated over 180 years of continued, dedicated service. In 2012 they even celebrated their 175th anniversary, something that was a celebrated event both nationwide and internationally.

22. Their Spin-Off Store Hr2 Tried To Tap A Different Market

Another way in which the company wanted to improve its reach was by providing accessibility to those who might not be able to afford or purchase their products due to their high-end status. Because of this, H. Renfrew opened their “hr2” stores, a chain of stores that was meant to focus on the cheaper products that they carried. The goal was to allow people who couldn’t normally afford the luxury products to be able to own some clothing they truly desired without losing the quality they came to expect from the company.

23. The Chain Was Founded In Quebec City

Despite having locations all over Canada, the store was founded in Quebec City. This was because the original location of Henderson’s family fur shop was there as well, making it a logical location to not only sell his new products but stay close to his family ties.

Though today H. Renfrew has a large selection of products from all over the world, it didn’t use to be this way. In fact, Henderson’s original plan was to sell hats and other types of caps, a direct result of his experience working in Ireland. He would only expand his reach to the fur market after witnessing the success of his parents, something that would change the direction of his business forever.

25. The Founding Family Is From The River Foyle In Ireland Henderson’s family came from a place in Ireland called Londonderry, which was specifically located in the River Foyle. This location in Northern Ireland was a spot that had many immigrants leaving the country in favor of North America, signaling the influx of immigration that would begin in the mid-19th century.