Skip to Content
The Ticwatch E2 is a great accompaniment to your life. But if you are a sports enthusiast, you'll welcome the extra features in the Suunto 7. 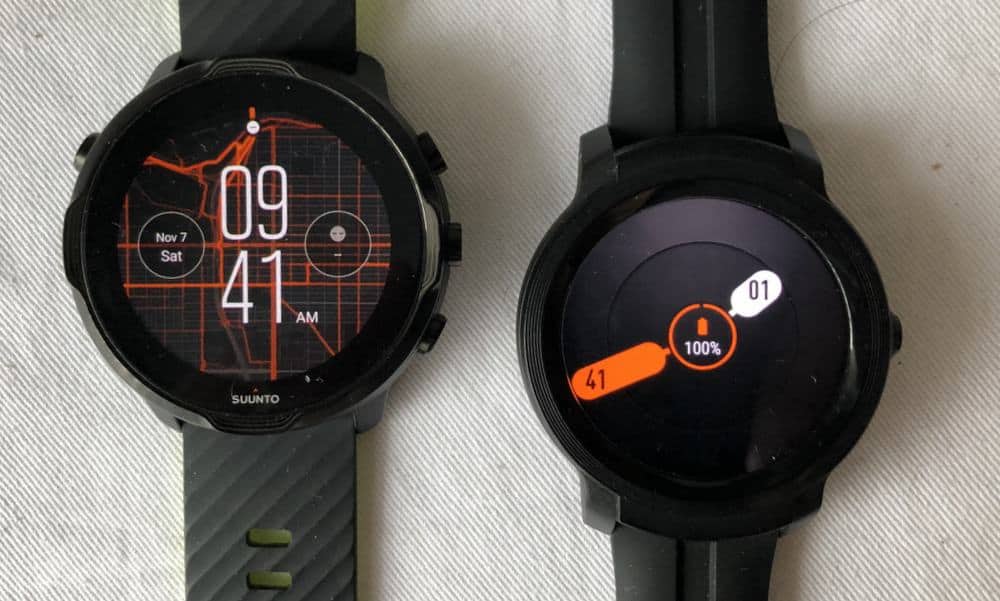 The Suunto 7 and the Ticwatch E2 are great smartwatches in their own right but to say that they’re in the same league of sport smartwatches is a bit of a stretch.

The Ticwatch E2 is like the lite version of the Suunto 7.

Whereas the Suunto 7 is pretty heavy duty for sports enthusiasts.

The difference between the two smartwatches really comes down to software and a little bit of hardware. 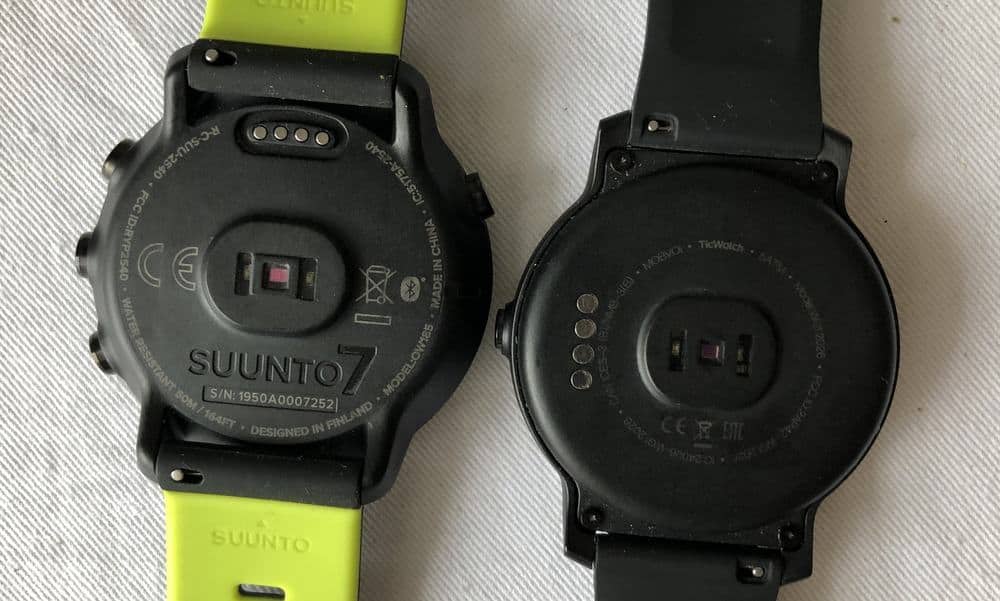 Hardware differences between the Suunto 7 and the Ticwatch E2

Don’t expect too much.

These days when I talk about differences in hardware between sport smartwatches, it’s about how many new metrics that it can measure.

But that’s not the case with the Ticwatch E2 and the Suunto 7.

Both measure the same things. Don’t expect to have any cool, trendy metrics like blood oxygen saturation measurements or sleep tracking.

They are available on the flagship Fitbits, Garmins and Apple Watches, but not these two.

The main difference between the Ticwatch E2 and the Suunto 7 really lies in the performance-related hardware.

The Ticwatch E2 has pretty dated hardware specifications. It uses the four year old Snapdragon Wear 2100 and also has 512MB of RAM which is the lowest end of configurations available in entry level Wear OS smartwatches. Even Fossil’s entry level smartwatches have moved up to a Wear 3100 processor.

The battery life of the Suunto 7 is ahead when compared to the Ticwatch E2.

I am confident that the Suunto 7 will last two days while the Ticwatch E2 requires daily charging. This is especially so if you use the sports tracking features and internal GPS on the latter. 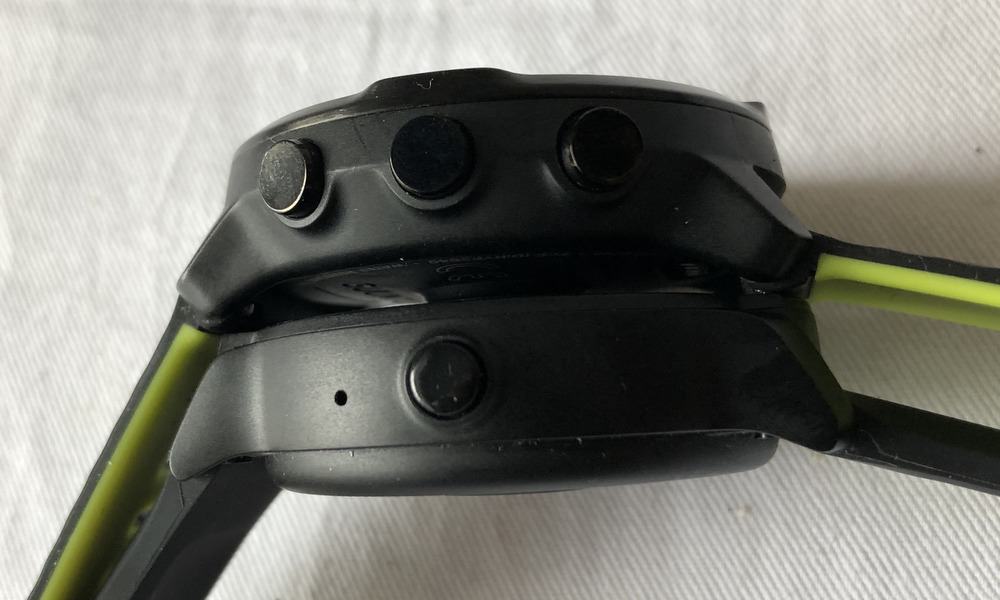 One button really pushes my buttons

The elegant, one button solution on the Ticwatch E2 is great for most situations except sports.

I much prefer the four buttons on the Suunto 7. It makes things a lot easier especially when you are in the heat of an intense sport which requires concentration.

Here’s why: on the Suunto 7, you can change views by pressing a button. On the Ticwatch E2, you will have to tap or slide your finger to scroll.

What about changing music? On the Suunto 7, you can skip tracks by pressing a button. On the Ticwatch E2, you will be tapping.

If you are doing something which requires your hands on the handlebars/reins/steering wheel/paddle/oars and you want to get something done quickly, a button is much more efficient than a touchscreen. 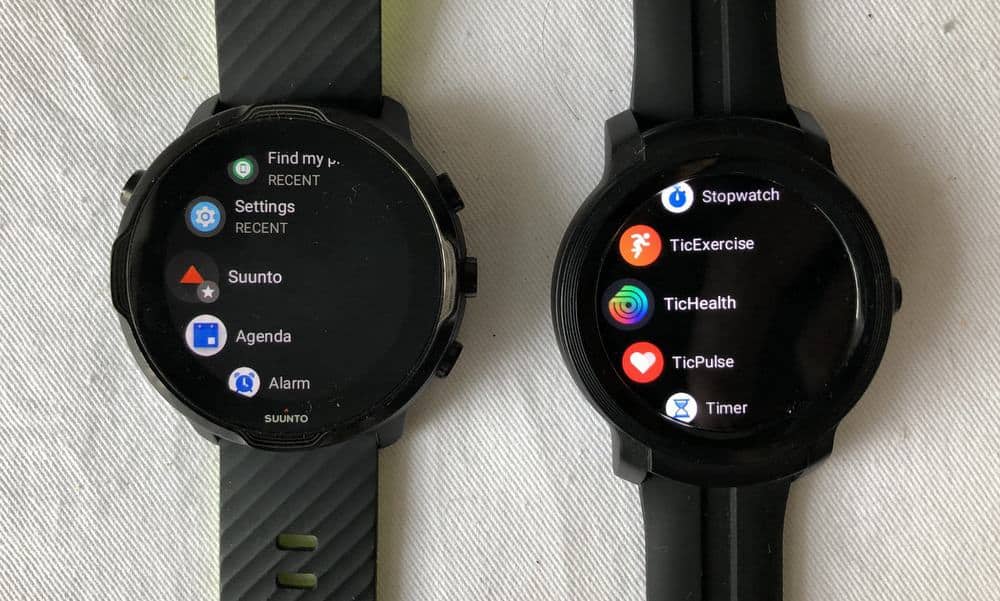 The main difference really comes down to software. Specifically, the Suunto app that comes with the Suunto 7.

In a big part, this is the main reason why I would pay the pretty noticeable difference between the Ticwatch E2 to get the Suunto 7. 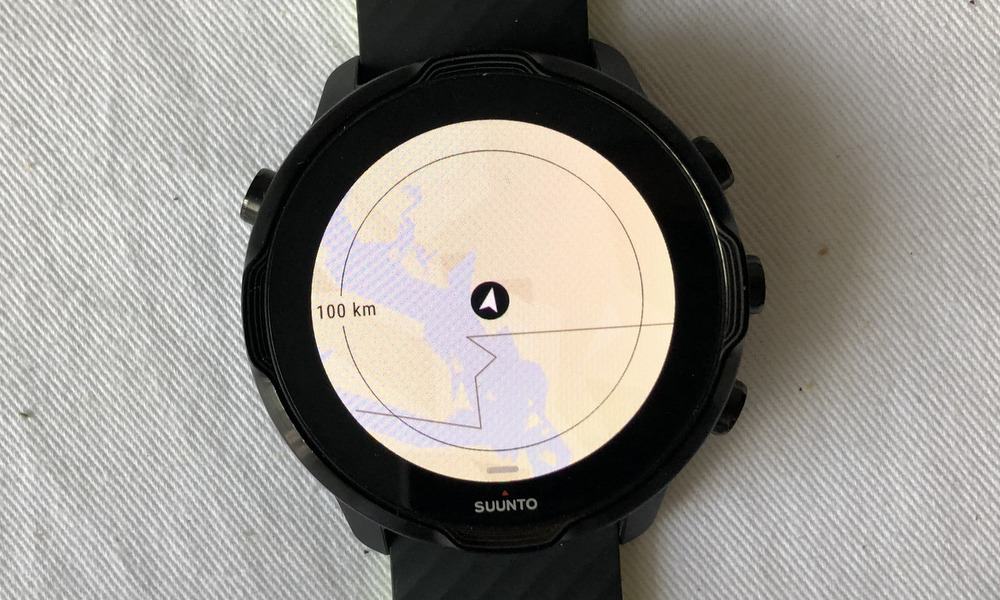 Offline maps are the most amazing feature for people who like to go into the wilderness.

Even when I go to familiar places, I find myself referring to the Suunto 7’s maps a lot. Different lighting, fallen leaves in the autumn and other visual changes can be really confusing even if you’re on the same trail.

It’s very useful as a navigation tool when you hit a fork on a trail and aren’t sure which one to take. It has also proven to be very useful when I was out in the water and didn’t know which island was which.

The Ticwatch E2 has no such capability. 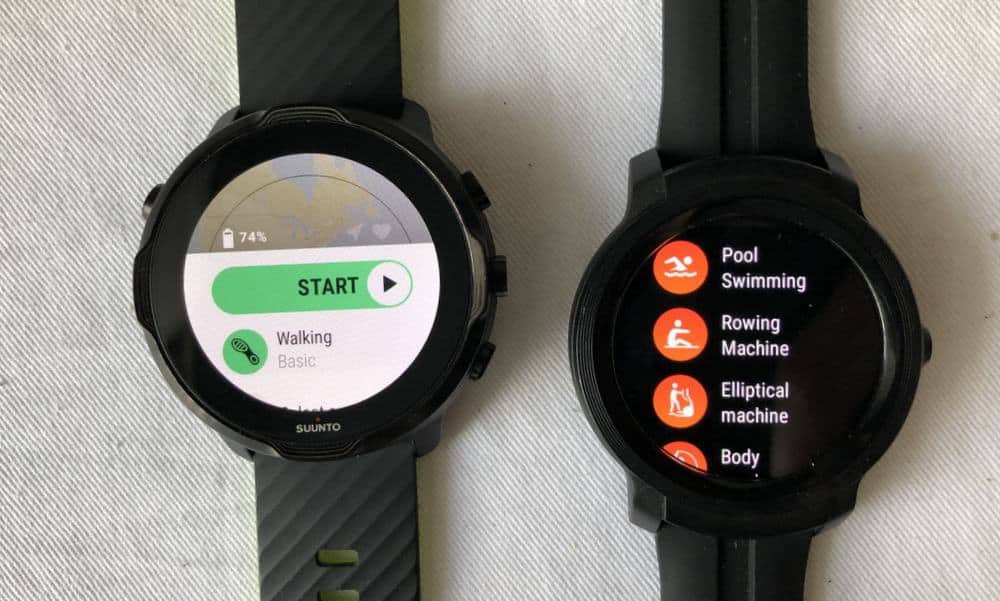 Suunto app as a workout tracker

The Suunto app also acts as the primary workout tracker which is something I really like.

I think of a smartwatch as an on-board diagnostic tool, just like in cars.

Some tools can give you more data than others, and this is true with the Suunto 7 when compared to the Ticwatch E2.

The Ticwatch E2 has its own suite of workout and lifestyle apps from both Mobvoi (its makers) and Google (included with all Wear OS watches including the Suunto 7).

Mobvoi included the TicHealth/TicPulse/TicExercise apps but they’re really not competitive against the Google Fit apps because they can track fewer workouts than Google Fit and most features that the Mobvoi suite has, Google Fit has. So there’s little incentive to have two overlapping apps on your smartwatch and smartphone.

The few advantages available are that Mobvoi’s apps reminds you to take steps periodically and also that it tracks swims. Google Fit doesn’t.

The Suunto app, however, is on another level. It tracks over 70 workouts and offers fantastic analyses of your workouts.

You also get a suggested amount of recovery time before your next workout. As a keener, sometimes I can go out for hours and then want to do it again the next day. This metric gives me some pause to think about my overall health condition.

These are pretty elite features that aren’t available on the Ticwatch E2 nor any other non-specialized sport smartwatch. 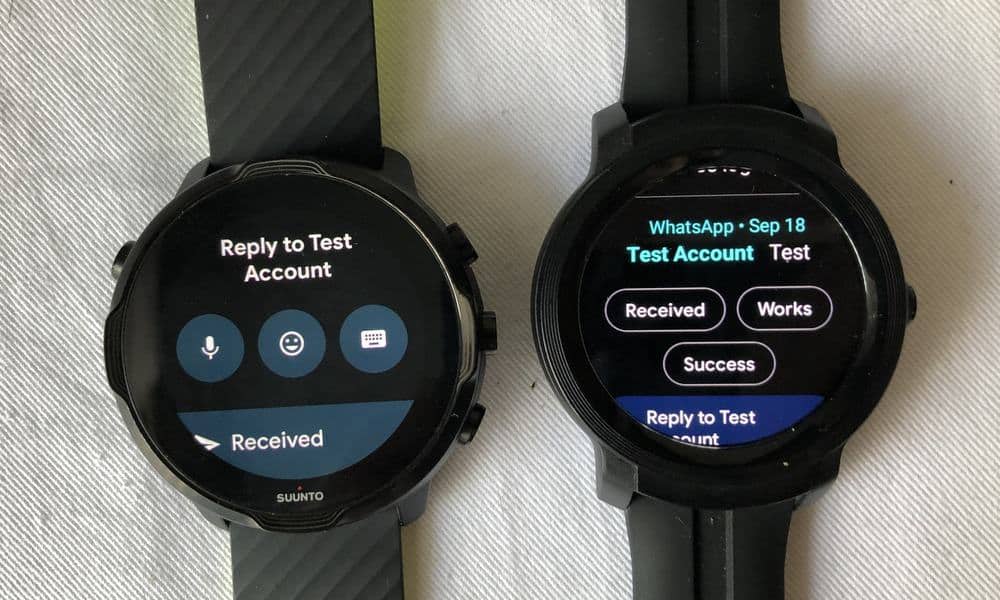 The other reason why I really like wearing a smartwatch is the ability to detach myself from my smartphone to do simple tasks.

It’s a bit like how steering wheels these days have buttons for the driver’s ease of interacting with the many gizmos in a modern car.

Unfortunately for the Suunto 7, the Ticwatch E2 is more or less on par with the Suunto 7 in this regard, given that they’re both Wear OS smartwatches.

All notifications that come into your smartphone will be visible on both smartwatches.

You can reply to them if you are paired to an Android phone.

Compared to all other OSes, the best part about using the Wear OS is the access to Google’s superior speech to text transcription service.

This means you can send custom replies with confidence that your message will be accurately transcribed to a large extent.

Otherwise, you can also send dynamically generated replies that Google suggests based on the text you received. You can also draw letters to form words or use the keyboard but those are very tedious and I tend to avoid them and use my smartphone instead. 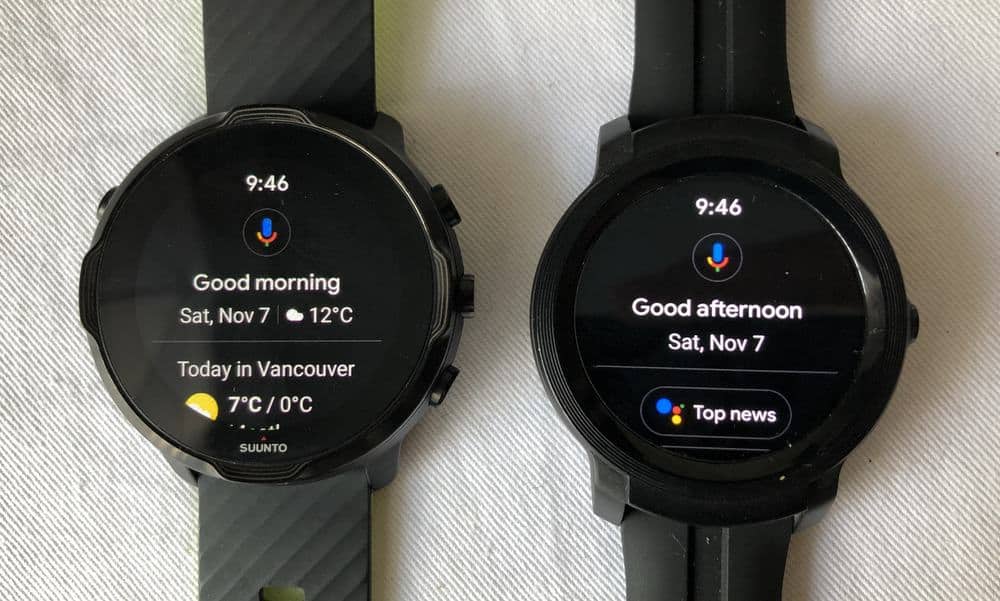 Another benefit of going the Google way is that you can use Google Assistant.

Google Assistant is very good. You can ask it random questions and it will search the web for an answer.

You can ask it to start timers, check the weather and do tasks that would otherwise be very tedious to do on a smartwatch.

A reliable voice assistant really makes a smartwatch much more useful. It helps you avoid a lot of swiping and tapping.

Both of these smartwatches can control the music on my Galaxy Note 9 remotely once you start playing your podcast or music on your smartphone.

But because the Suunto 7 has more buttons, it’s easier to access this feature by pressing the middle button. On the Ticwatch E2, you’ll have to swipe to access it.

If you need a basic smartwatch, the Ticwatch E2 offers great value and fantastic features thanks to the Wear OS.

If you need offline maps and advanced workout analysis, then you need the Suunto 7. The price difference between the Ticwatch E2 and the Suunto 7 is worth it if you also want better hardware.