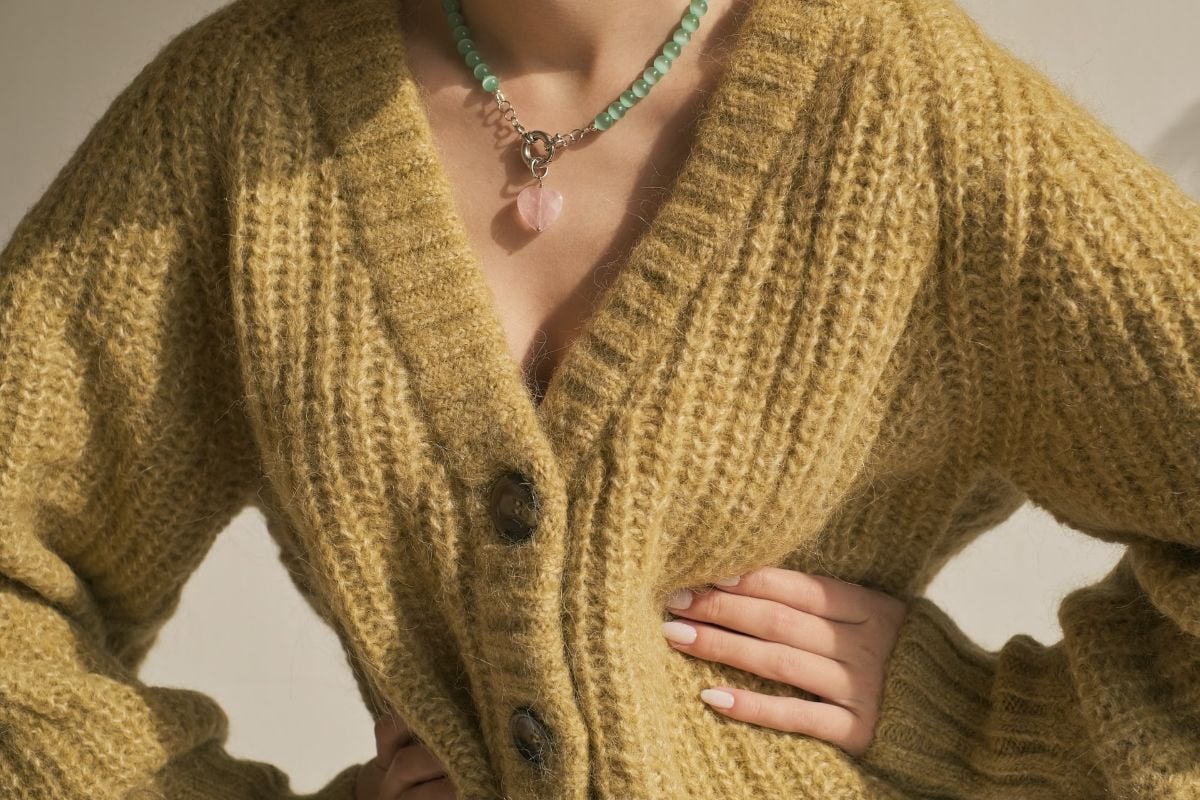 Cardigans are such a staple of fashion, the biggest music stars don’t just wear them…they write songs about them. Cardigans have been seen on the biggest superstars, the most elegant royals, the coolest fashionistas and all the sexy people, too. There are lots of different types of cardigans and all sorts of cardigan styles you can try to create a ton of looks. Get to know them all and get to know a whole lot more about cardigan style. 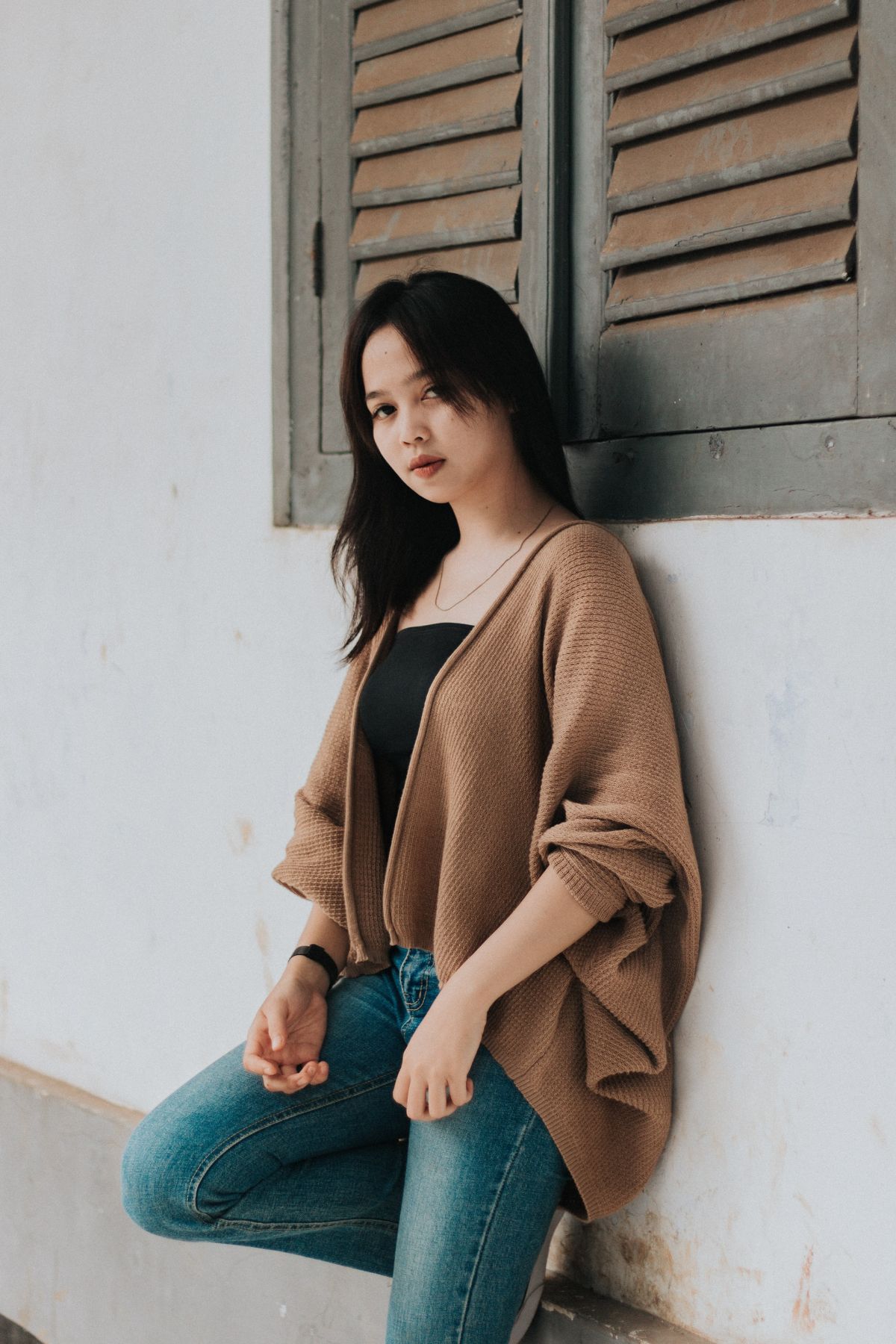 The cardigan is a sweater that has a buttoned, zippered or open design and a V neck or scoop neck. Within this framework, cardigans can fit in many different ways and have lots of different styles and looks. The cardigan is named for the 7th Earl of Cardigan specifically. This was James Thomas Brudenell, born in 1797. Other Earls of Cardigan came before him and presumably after, but his is the one who is known for giving cardigans their name. It’s all because of a strong fashion choice, a couple of truly terrible choices…and a poem.

Despite the fact that the cardigan is named for him, this is not what James Thomas Brudenell, 7th Earl of Cardigan, is most known for. Brudenell is best known for leading the Charge of the Light Brigade in 1854. Immortalized in poetry by Tennyson, the Charge of the Light Brigade was a clash between Russian and British troops during the Crimean War. The charge on Russian troops by the British cavalry was such a disaster, this event is often used as a textbook example of poor military leadership and terrible tactical decision-making. For reasons unclear and following orders that were vague from the outset, 600 British troops were ordered into an ill-fated charge against well-positioned and well-prepared Russian troops. It was a suicide mission from the word go.

The Earl of Cardigan was wearing a waistcoat, an old-fashioned word for a vest, that was made of knitted wool during the event. Some say his officers were also wearing this waistcoat and some say that even Cardigan wasn’t really wearing this item. But either way, the story became part of fashion legend and the cardigan quickly found its way into everyday fashion and pop culture references.

The original knit vest style became known as a “cardigan jacket” by 1864 and by then, the cardigan had the long sleeves that are now associated with the classic style of a cardigan. From then on, cardigan style pretty much exploded. Cardigans have been a part of fashion ever since and they’re still worn by people to create all kinds of different looks and display lots of different styles.

Which different types of cardigans have you worn? Which ones will you wear after you learn about them? It’s time to get a look at all the different types of cardigans you could be wearing right now. With the right cardigan, you can create literally any fashion look you want. You can be professorial, look like a hot librarian or show off a lot of skin if you have the right cardigan. Get to know all the styles that are available and you can start playing around with all kinds of different ways to wear your cardigans. 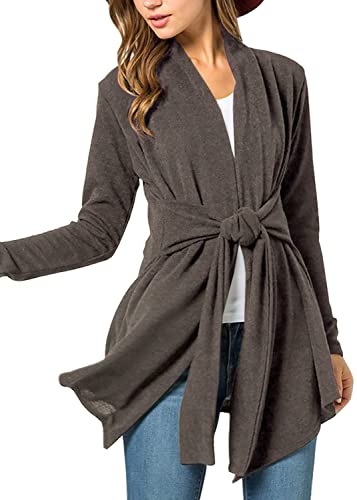 Belted cardigans are usually longer styles. They come with a belt attached. Usually, the belt is in the same material and color as the rest of the cardigan. Usually, belted cardigans are hip-length or longer. The belt allows you to add definition to your waist and make your curves pop a little. 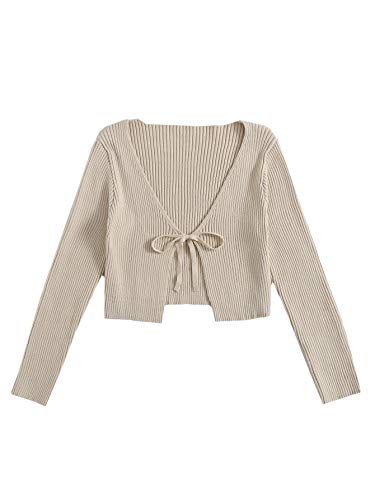 A bolero is a cropped cardigan style that ends just above the waist. It may be worn in an open or closed style. This is a short sleeve design. 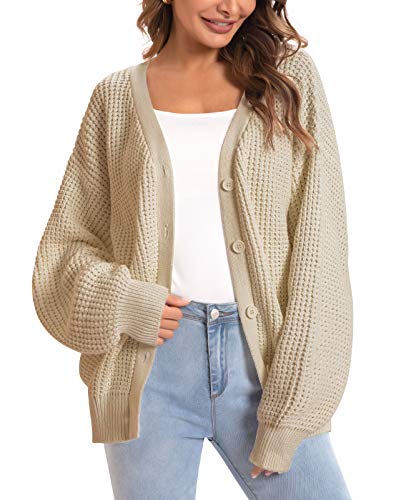 The boyfriend style cardigan has a somewhat loose and boxy style. This is a woman’s cardigan style that’s designed to look more like a man’s cardigan. That’s why it’s called a “boyfriend” cardigan. This is not a man’s style, however. Despite the somewhat boxier cut, boyfriend cardigans are still slightly nipped in at the waist to help define your curves and show off a hint of your figure. After all, you do still have a woman’s shape. 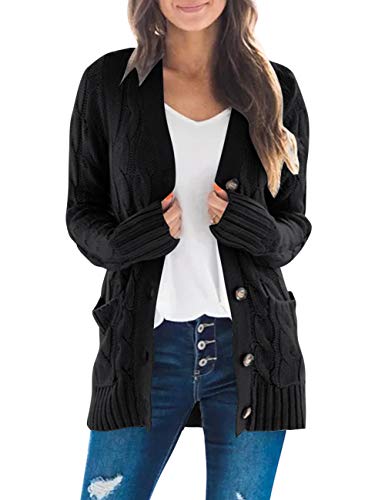 The classic button-down cardigan is the most recognizable of all cardigan styles. Buttoned cardigans are made in all sorts of different sizes and fits, from short and fitted styles to loose and oversized styles. The buttons may be large or small and there may be as few as two buttons or many more. 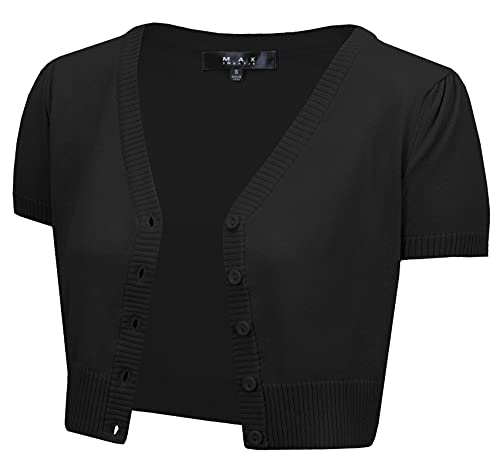 Cropped cardigans are short styles, higher than waist-length. They’re longer than shrugs, covering at least some of your ribcage, and may have short or long sleeves. 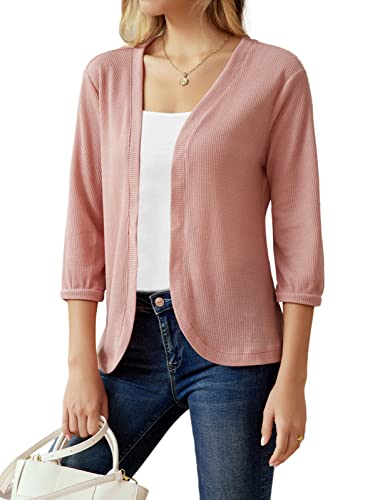 Draped cardigans, or waterfall cardigans, are loose, open cardigans that are made to drape loosely around the body. These work great as an extra layer. Draped cardigans are usually made with lightweight construction so that they hang well. 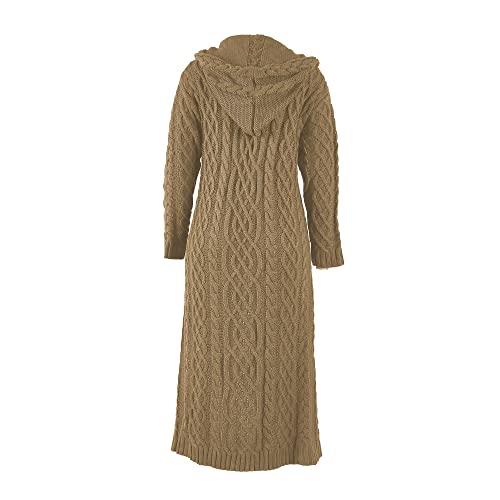 Hooded cardigan styles have an attached hood. Any cardigan style can also have a hood attached to add a little extra warmth and a style change option. 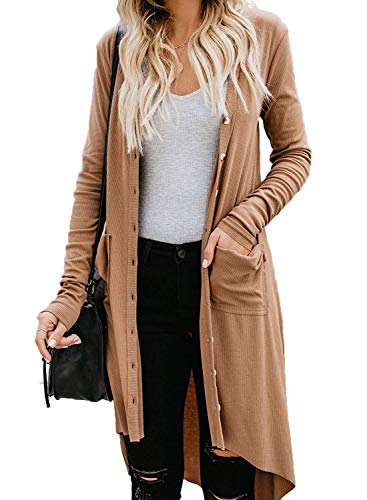 Long cardigans, or dusters, are just about full-length. They reach at least to mid-calf and may even be ankle-length. Long cardigans like this are usually belted as well, though some styles are open. 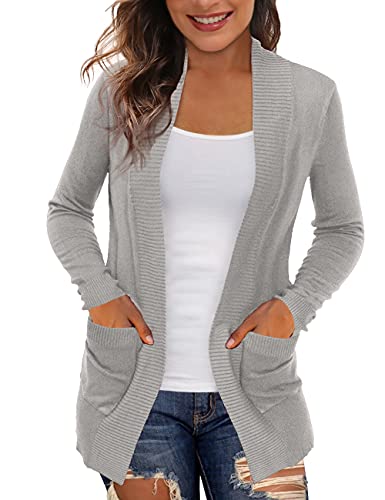 Open cardigans are just that, open. There are no buttons, no zippers and no belts to keep them closed. They’re designed to be worn open. 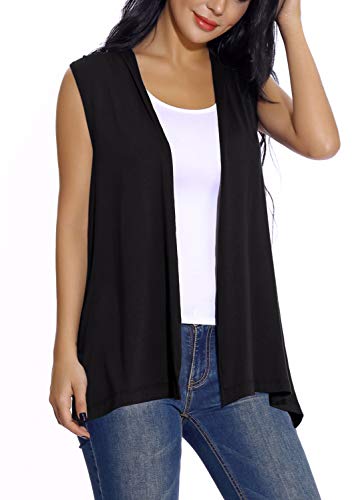 Cardigan vests have the V-neck and knit construction of a standard cardigan but they have no sleeves. Vest cardigans are made in long or short styles in both loose and fitted designs. 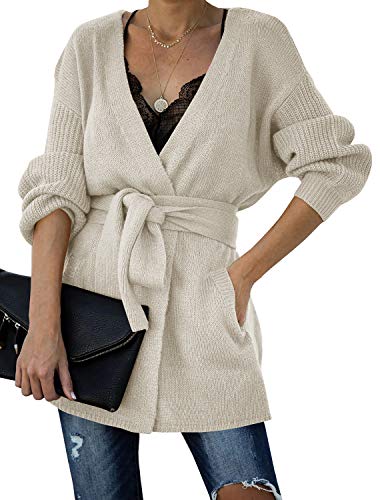 Wrap cardigans are made in wide styles with a little extra fabric so that you can wrap the cardigan around you. Usually, these styles have an attached belt that you used to close the cardigan around your waist. This helps to define your face. Wrap styles are flattering on all body types because they emphasize your waist and enhance your bustline, which certainly never hurts. 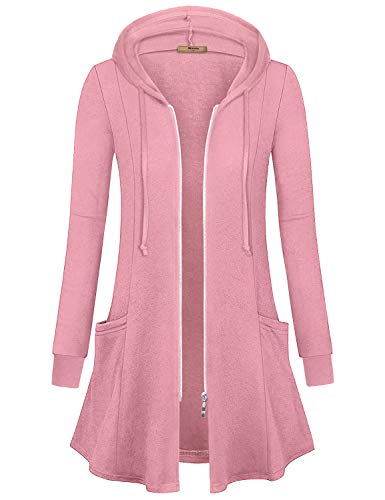 Cardigans are sometimes made with zipper closures that go partially or all the way up the cardigan. Zippered cardigans are made in all different styles and sizes, from fitted to large and loose.

Knit clothing is made in all kinds of ways using different materials and different knitting techniques. However, there are some knits that you will find more commonly in cardigans than others. Knowing what sets them apart and how they are different from each other will make it easier for you to find the right cardigan for your style and warmth needs.

Many materials can be used to create a knitted piece of clothing. Wool is common, with Merino wool and cashmere being more high-end options, but cotton can also be knitted into a sweater. Acrylic, polyester and other synthetic fabrics are also used. 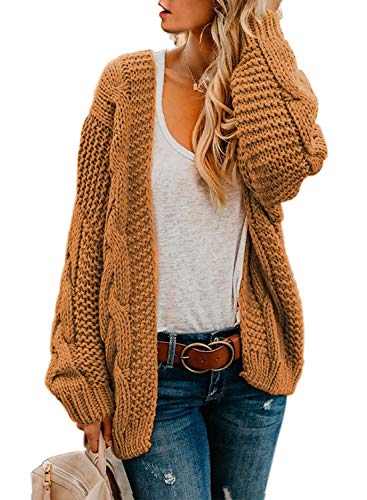 Cable knit is a distinct type of knit that’s made in a “cable” pattern. This creates visible thick, knitted sections in an alternating rise-and-valley pattern where some sections are raised up in a wide, flat pattern between small sections in-between. 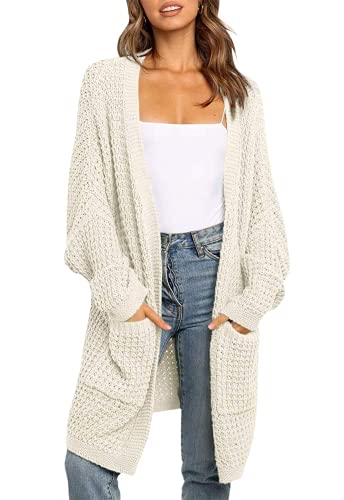 Double knit, or doubleknit, has almost twice the thickness or single knit designs, such as jersey knit. Because of the way this knit is created, it has a soft, fluffy texture that is often used in cardigans and other items of clothing. 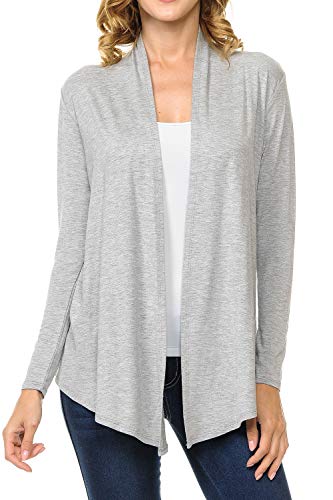 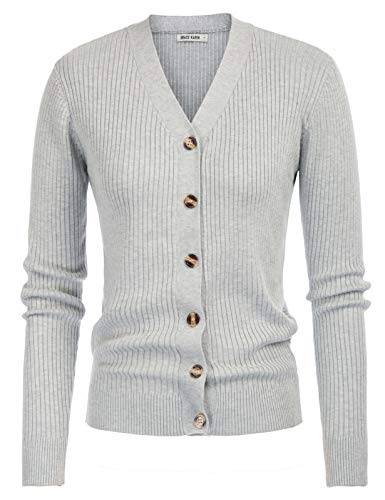 Ribbed knit construction has raised and lowered sections that create a delicate texture on the knitted item. This creates a unique texture that feels like ribbing. 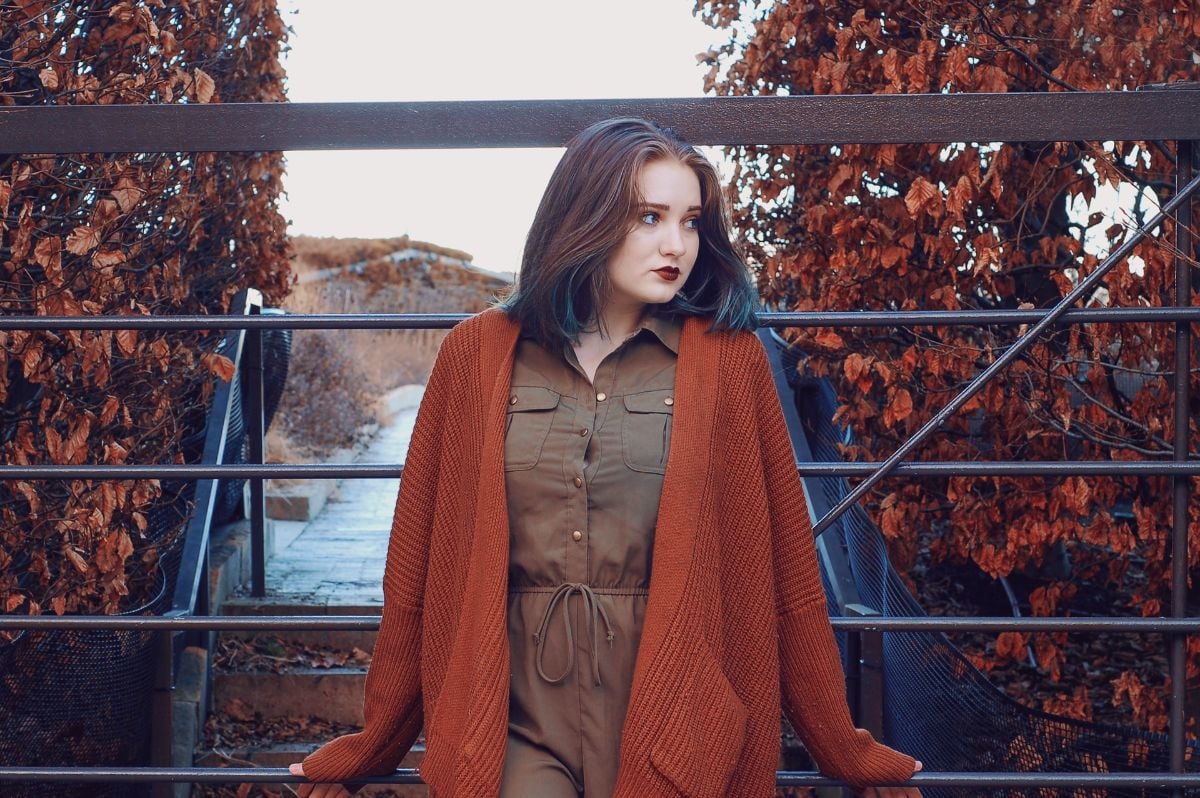 Are cardigans in style?

Since they first appeared in fashion in the latter half of the 1800s, cardigans have never really left the style scene. Cardigans have only expanded in design to include lots of different types. They are made with all kinds of different materials and colors.

And they’re pretty much always in style. Even when they aren’t in style, cardigans are classic and retro and vintage. You can always get away with wearing a cardigan and it’s always a good idea to keep them in your closets because probably, they’re going to be trendy again if they aren’t already.

Should cardigans be hung or folded?

Storing cardigans is a real challenge. It’s always hard to know what you’re supposed to do with specific types of clothing. Should your cardigan be folded up in a drawer or is it supposed to be hung up in the closet?

Well, both. Heavier knits, such as cable knit and double knit cardigans, should be folded and put on a shelf or in a drawer. This is because the weight of the item is such that the cardigan will sag and pull on the hanger. Over time, the sweater will become misshapen as a result. Lighter-weight knits can be hung on a hanger, because these won’t sag and stretch out.

Cardigans are practically made for business casual looks. Cardigans work very well in office environments, in fact, as long as you choose a design that isn’t too bright or flashy.

How do cardigans fit?

Cardigans are made to fit in all kinds of ways. Some styles are made to be loose, even baggy, round the body. Other designs are fitted.

Cardigans can be cropped waist-length or even really long. That makes it hard to know whether or not your cardigan is really fitting you the way it’s supposed to be fitting you. Check the fit through the shoulders.

The shoulders of the cardigan should end where your natural shoulders end, without a lot of fabric that sticks out from the shoulder. However, the fit also shouldn’t be tight across your back or your shoulders. You should be able to move naturally and freely, with a full range of motion through the arms.

Corporette – The Corporette Guide to Stylish Cardigans for the Office

The Dreamstress – Terminology: the history of the cardigan

The Gentlemanual – A Gentleman’s Guide to Sweater Styles

She Packs Lite – 15 Best Cardigans for Women: Travel with Style in 2022

Wardrobe Consultant – How to Fold Your Sweaters, and When it’s OK to Hang Them