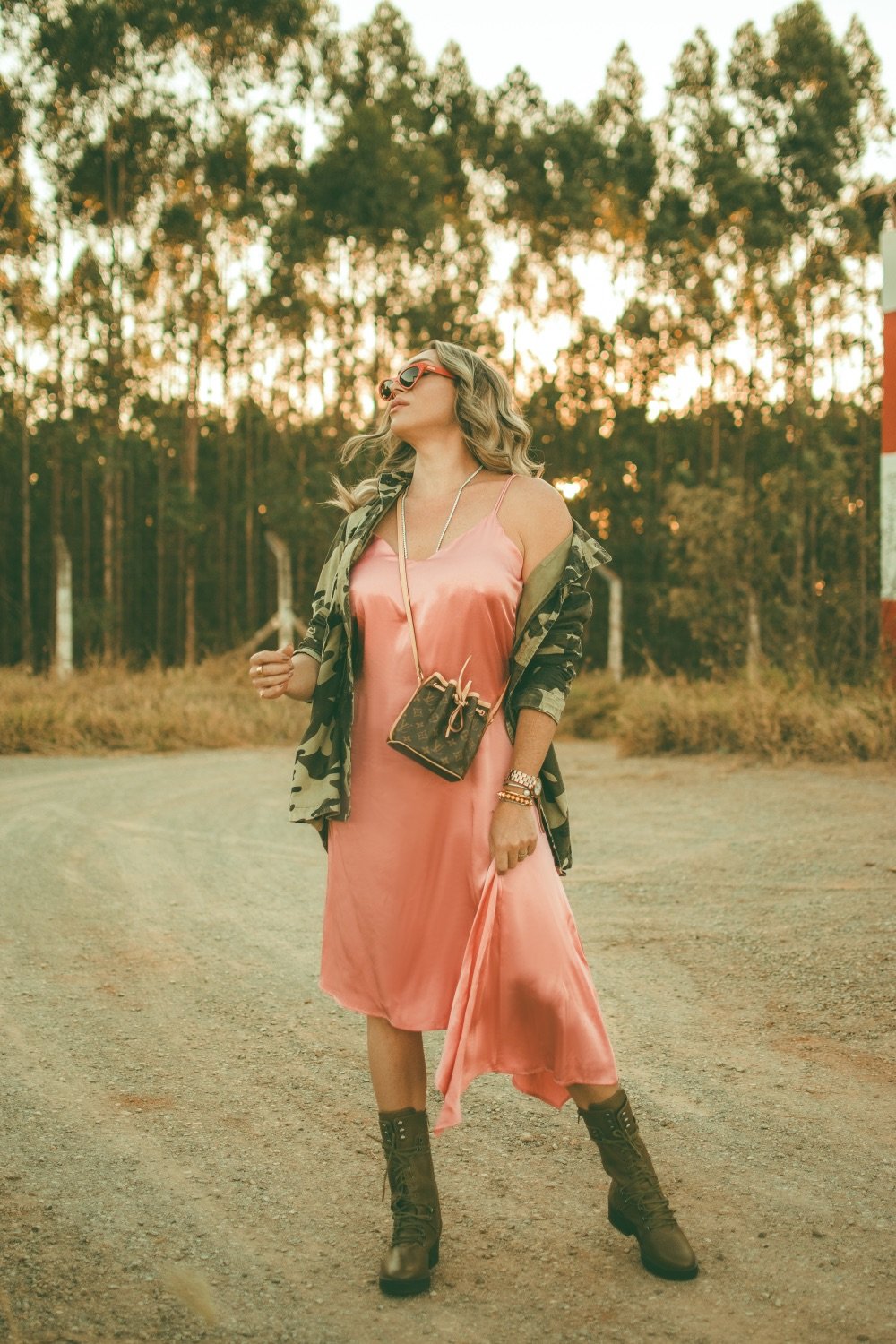 We have come a long way with camo, haven’t we?

What once was only the standard uniform for the bravest in battles and extreme terrain is now just as appropriate for us battling the concrete jungles everywhere or just chilling at home in our cozy camo joggers.

Camouflage might just be the single most representation of what being in style means to us. On a deep level it’s all about transforming us into something we are not and fitting in, to blend into our surroundings. If camo wasn’t supposed to be stylish then why were the French the ones to nickname it camouflage? Yea, see it was always destined for something greater.

I’ve always been obsessed with the standard issue ARMY tee ever since my uncle got back from boot camp but I’m not going to lie it took me a while to find my way around camo clothing. When I was 9 years old, we moved from a big city where nobody wore camo to a little rural town where a lot and I mean a lot of adults wore camo in many different forms. This was strictly as work wear or hunting gear but actually when work was done it was just still the clothes they wore and pretty dirty. I guess I shouldn’t be surprised if I’m looking back that my first little new girl crush was on the one kid that wore camo SMH. I guess it’s because the camo made him look mature and like he had been to places. I had only been up and down the 101 so that was appealing. That was short lived but the scar from all the camo that I would see over the next 10 years burned deep. I wanted to be fashionable and from I could tell this wasn’t the place at least from what I could see. I mean there wasn’t a single runway fashion show around, nope that was 20 miles away and at the mall around prom season.

Just like everything we get our hands on we have over-processed and over-executed the camo.

There is blue camo and pink camo, there is purple camo, and there is rainbow camo and well there is camo in every pantone color possible. This is one time that you will hear me say that actually less here is best here. I get overly excited every time I see a rainbow and I squeal which usually leads everyone to think there is something wrong with me and I’ve scared them to death. There’s not, mmm but there actually might be but I just get really happy around rainbows. I’m still trying to work on that but I don’t see that changing anytime soon nor my opinion on rainbow camo.

So, now by process of elimination we should all be clear that there is only one camo we are talking about. Oh, it wasn’t clear? I’m jumping up and down screaming (drumroll please) its traditional army green camo. Duh. This isn’t a lecture by your Grampa so I’ll skip the history lesson. But if you really want to know about the chronicles of camo Google it. It’s worth it and interesting and with a lot of different purposes but I can’t keep track of what camo is used by which branch. I’m not down with OPP (yeah you know me) nor the ability to know what UCP, OCP or BDU (yeah actual camo names) are technically for. If I was in the military I would sure as heck know the difference but I’m not, so I don’t. No disrespect here.

Give me all the green, tan, black and brown camo possible. I started dipping my toes in with a pair of camo skinny jeans a long time ago. The awesome thing about it is that it just gets better over time. Super worn in, super wash out. I still have those pair of jeans and while there is a tear from pulling the belt loop over my muffins it doesn’t matter, they just get more character and more lived in. When you’ve got something that good you don’t just toss it out when it gets a wound no you put in in the back of your closet, replenish with a new pair and then decide years later to get thread that needle and fix that beotch. Camo is camo just like the little black dress is a little black dress a classic.

You don’t need to be super crazy with the color scheme, camo is it. It’s wild enough and I literally think that there are only 4 count 1, 2, 3 4 colors that is camo’s best friend forever.

Let me count the ways

One. Black. Don’t be surprised. I know, you’re not but let’s pretend. It’s a super basic and it gives the style a chance. It’s no nonsense, keeps it clean and visually that is super important when you’ve got a print on a mission like this. 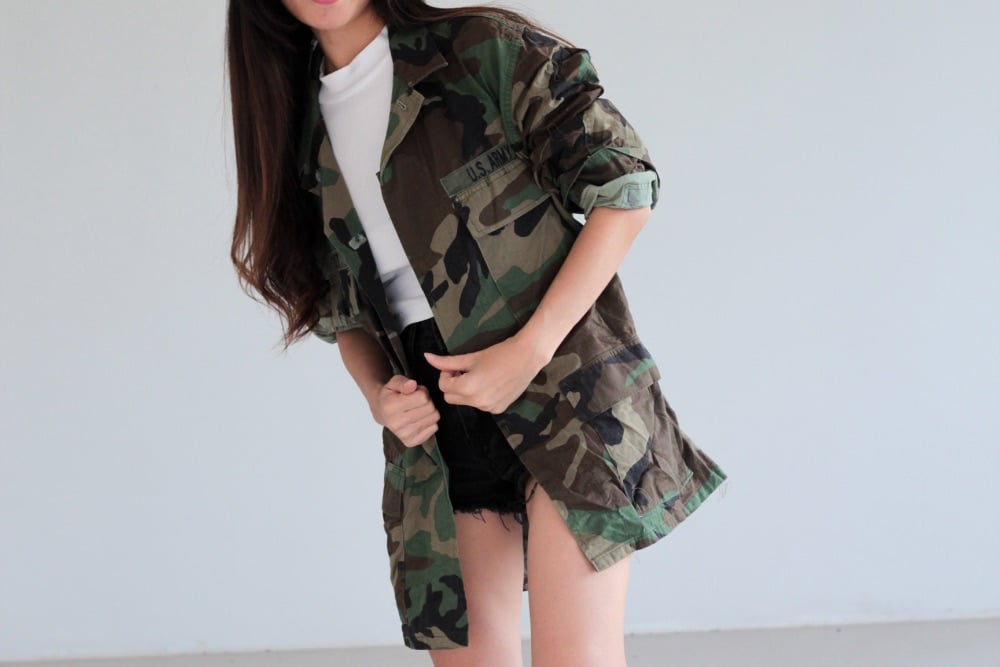 Two. No color nude. Don’t be surprised. I know, you’re not but let’s pretend. Ha ha. Just kidding. Real talk though if you’re a white top kinda gal or guy you are totally winning and not like Charlie Sheen. A nice soft cotton tee that drapes in all the right ways is just a must. If you’re looking to dress it up a bit even a button down or a blouse with a little tuck is fun. You can even go more ivory and oat but not much darker than that because we won’t be able to find you. Camouflaged

Three. Denim blue. It’s considered a color in my book. Dark or light this is a match made in heaven. Whether it’s a jacket, simple denim shirt or even jeans go ahead and grab it. It works you know it does too. Hello camo jacket with a white top and jeans, ok.

Four. Hot Pink. Say what? You heard me and I saved this one for last because it actually might be my favorite combo. Probably not the one I wear the most but it’s so unexpecting but man does it just create a little somethin’ somethin’. Leggings, pink tee and camo jacket??? I’ll fight this war. Just try me. Camos whole thing is blend in but I say fight the power and go bold or go home. 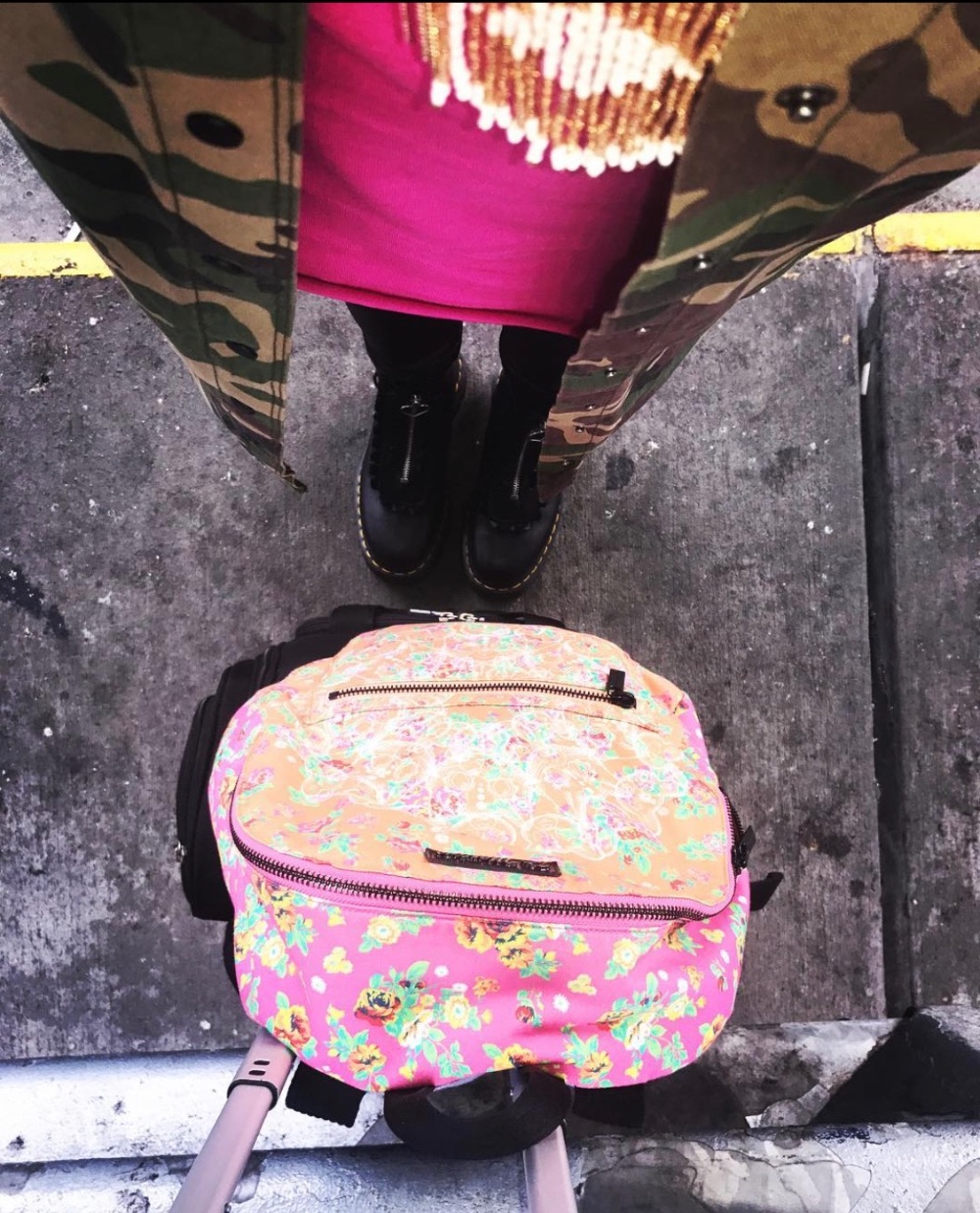 Basically, I also don’t follow my own rules all the time. There are exceptions to all of this. I know I’m a pain. Try living with me. Regardless, there are always exceptions. I would never ever say “where that red whatever with that camo whatever. Ewww. No. If you have a really cool embroidered patch with a big red floral then iron on your heart out. The more patches the better and make your own with that old dress you have. Why are you keeping that anyway, it has big snag in it from your crazy ass cat? Repurpose and make it authentic.

If you can hit up your local military surplus store you should and really fast. Nothing is ever cooler than the original. You can get patches on amazon and have them on by tomorrow’s Happy Hour. So cute! 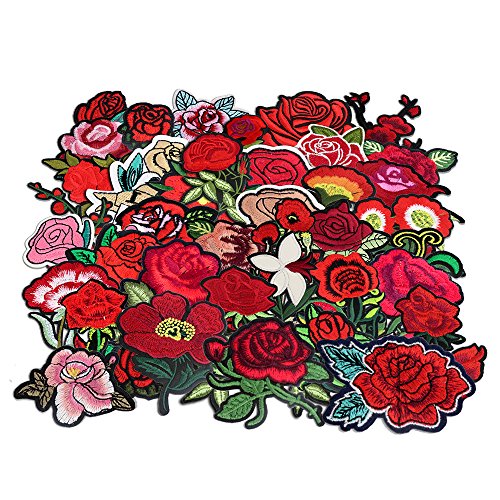 I’m also a total liar about colors when it come to your boots and shoes. Some are my least favorite than others but you can pretty much finish it with any cool kicks. Oh, and I crave a camo with a good floral sneaker.

You’re cute have a little funk with it.

Listen I’m not trying to be the boss of you. Nope. I’m simply pointing out the most visually appealing colors that just work with our day-to-day fast fashion produced camo. I’m also not trying to beg you, but I’m going to root for the hot pink. Anyhoo, you do youhoo and no one will ahh boohoo.