The Huawei Watch is a stylish smartwatch. See if this smartwatch is comparable to other smartwatches in the market. 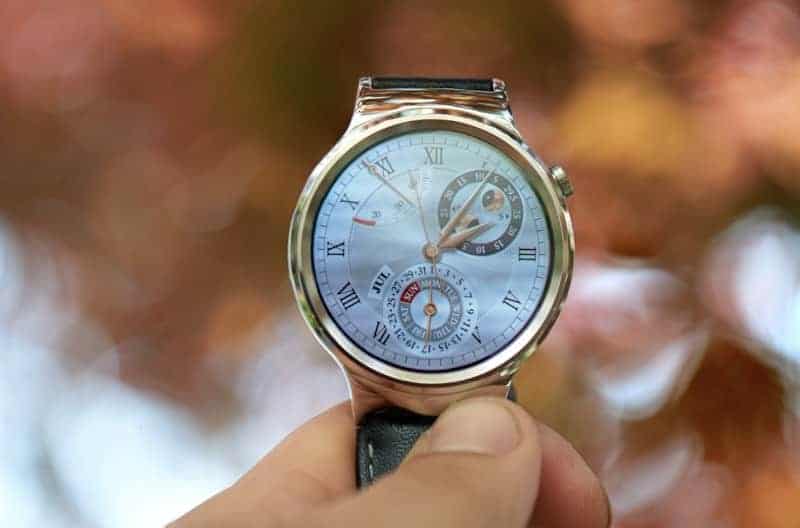 Below you can skip to various sections.

What To Consider Before Buying A Huawei Smartwatch

This watch is all about looks. With a price tag that’s higher than your basic smartwatch, you expect the Huawei to have more complex functionality or maybe do something special. It’s not really different than your typical Android Wear watch.

The display is perfectly round and has a high resolution. The sapphire crystal protects the watch face. The WiFi lets you use your watch when you’re away from your phone.

Other than that, you’re stuck with the Android Wear apps. Android Wear watches are easy to set up. In fact, here’s a tutorial for that. They have a lot of options, but you’ll hear some complaints about the operating system. Nobody’s perfect.

Is the Huawei smartwatch worth it? If you need something sportier or more rugged, you might want to look for a different watch. I’ve written reviews of other smartwatches here. If you want an everyday watch that’s perfectly classy without going overboard, this may be the watch for you.

Let’s kick off with our video review:

The smartwatch market is getting crowded. Forbes claims that the smartwatch industry will grow about 40 percent from 2015 to the end of 2017.

Names like Huawei may be overpowered by more familiar brands, like Garmin and Fitbit. The Chinese company is best recognized for its line of inexpensive Android smartphones. It apparently also does a great job of making really good-looking smartwatches.

The Huawei smartwatch is on par with brands like Fossil and Michael Kors when it comes to looks. It’s the only one on the market to cover its face with sapphire crystal, which adds durability and scratch-resistance to the display. Plus, the display is always lit, so this looks like a traditional watch and not some complex venture into computer engineering.

Huawei isn’t just a pretty face. It feels like it’s made of high-quality materials without being too heavy. The WiFi capability lets you get notifications from your phone even when you’re out of Bluetooth range.

Is the Huawei smartwatch good? Some people say that it’s the best Android Wear smartwatch. It has a heart rate sensor for basic activity tracking, and its AMOLED display is probably the crispest around.

Although it works best with Android smartphones, it can be used with iOS devices. The functions are more limited to iPhones than with Android phones, however.

The voice recognition makes it easy to verbally respond to texts. You can also use the “OK Google” voice commands. You can’t reply to messages using your voice, but you can dictate an email in Gmail, for example. Still, although the Apple Watch gives you better access to apps and functionality, it’s just not as beautiful.

Pros and cons from our videographer who used this watch extensively: If you’re a fan of showing off the fact that you have a smartwatch, there are lots of options available. However, if you prefer the look of a traditional watch, your friends will never know the difference when you’re wearing the Huawei.

The stainless-steel face is partially polished and partially brushed. The manufacturer didn’t skimp on any details. When you look at it straight on, it’s positively sleek and streamlined.

The case itself is chunky, though. It sits farther from the wrist than the Fossil Q watches, for example. That gives it some stateliness without adding too much weight.

You can purchase the Huawei smartwatch in several different styles. The watch case comes in silver, black, and gold. Each color has two band options.

You can add any 18-millimeter band to this watch. The bands pop out easily for swapping out.

The 400 x 400-pixel resolution on the 1.4-inch screen has no competition. It’s so sharp that it’s mesmerizing. The retina display on the Apple watch is the only one that’s comparable.

This watch is round and traditional, though. The Apple Watch has a distinct look that isn’t necessarily one of classic beauty.

Huawei has a wide variety of options for watch faces. They’re all stunning. You can’t customize each face by selecting a different accent color, but you probably wouldn’t want to. The options that come with the watch are well-designed, and the colors are already balanced.

The screen is always on, preventing you from wearing a creepy watch with a blank face. You don’t have to flick your wrist to check the time.

Even though the display dims when you’re not moving, the low light can be distracting when you’re sleeping or in a dark theater. The display doesn’t get any brighter when you’re out in the sunlight.

You can give it a temporary brightness boost if you’re having trouble seeing it. You can also put it into theater mode to temporarily disable the lit face.

Huawei uses the Android Wear operating system. You can swipe along the touch screen to dismiss cards. If you don’t have an extra hand, you can simply flick your wrist.

Is it the ideal operating system? Maybe not, but I’m not sure there is one yet. Many Garmins don’t have a touch screen at all, and the Apple Watch is similarly fussy to use. I think navigating with the Android Wear operating system is fairly straightforward.

Where the Huawei watch loses me is in its lack of smoothness. It takes a few seconds to open each app, and scrolling is jittery. That normally wouldn’t bother me, but this is not the cheapest watch. I’d expect a little better functionality for the price.

Although it has some health functions, it’s not really a fitness watch. It has a heart rate monitor, but you have to manually check your heart rate. You don’t get automatic monitoring throughout the day that allows you to analyze your averages.

When you’re using it, the heart rate monitor is pretty accurate. Like most smartwatches, the Huawei also counts your steps.

You don’t have to sacrifice participating in your family’s step count pool just because your watch is nicer than theirs. Harvard Health Publications report that pedometers really can motivate you to exercise more too. Therefore, the Huawei watch wins when it comes to fashion and function.

It’s probably a good thing that the pedometer helps you move more. When you get selected app and smartphone notifications on your watch, you’re bound to be a little lazier because you don’t have to get up to reach for your phone all the time.

A thick case on a smartwatch usually indicates a large battery. This one doesn’t have the capacity you’d expect. You’ll probably need to charge it every night.

While there are some GPS watches out there that can run for weeks on one charge, most dressy smartwatches have a similar battery capacity as the Huawei.

The internet is full of other glowing reviews for the Huawei smartwatch.

One user said: “The watch is absolutely beautiful. It does not look like a smartwatch which was one of the reasons I bought it. It is very classy!”

Another customer prefers it to the Apple Watch: “Bought for my husband for a Christmas present. He didn’t like the look of apple watches. He loves the look of this watch.”

One customer said that it’s a “good watch at a great price.”

A good-looking Android Wear smartwatch with a less expensive price tag, the Moto 360 delivers the coolness factor. You can pay more for the stainless-steel band. Otherwise, you get a few options for leather bands that are elegant and comfortable.

If you like the look of a traditional watch but don’t want to fork over the cash for the Huawei, you can look at the cheaper Moto 360.

You can get an Apple Series 2 Watch for the same price as the Huawei. If you have an iOS device, this might be preferable. It’s too bad that the Apple Watch has such great features in such a less-than-stellar design. Don’t get me wrong; the Apple Watch isn’t the ugliest thing out there. However, if you’re going for the gold in terms of style, it isn’t going to do you any favors.

If you like the look of a futuristic watch and want to maximize the features with your iOS device, you might want to check out the Apple Watch.

The Huawei and Michael Kors smartwatches look similar. They’re both all about style and suffer some when it comes to functionality. The Michael Kors doesn’t have a heart rate monitor, but it does allow you to make phone calls using the watch.