The Samsung Galaxy Watch3 is an amazing watch. When compared to its predecessors, it's not a revolution but an evolution. But should you buy it? 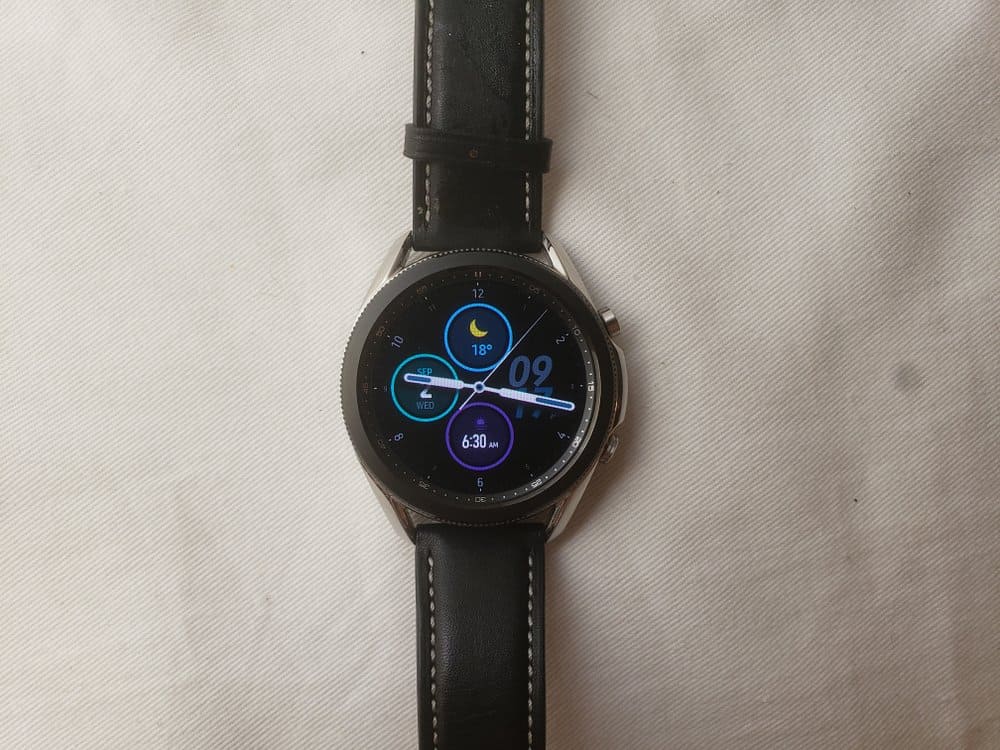 Do you remember the song PPAP? It goes “I have a pen, I have an apple…”

The singer grunts, “Hng!” and then says “apple pen”

It’s actually pretty funny to think of it that way but honestly the Galaxy Watch 3 looks a lot like it’s two predecessors.

They’d frequently fail to read your heart rate and tell you it’s your fault because you aren’t wearing it on the right spot.

The new one doesn’t have this issue. The Galaxy Watch Active 2 got rid of this Samsung innovation which was a pity, but I was a huge fan of its no-bezel, curved-edge screen. It looked premium, modern and slick just like every premium Samsung phone. Heck, even the Apple Watch Series 5 follows these design patterns.

Pretty conflicted, actually. The bezel is great, though. What I like about it is that it’s much easier to handle than a crown which is the more common tool on smartwatches.

For people who don’t know, the bezel is a bit like the scroll wheel on your mouse. You use it to scroll up and down menus such as the apps menu or to scroll through your emails and texts. You can also use it to change the volume when playing music. I really like that. I find a thick watch case to be unsightly, but that’s just me. The biggest watch I have is the Garmin Fenix 6 and I am not a big fan of the design, but it has many saving graces that give it a pass. I like visiting the landing pages of a new watch to find out how a manufacturer is marketing their products. It gives me insights as to what new features a smartwatch has.

So I searched up Galaxy Watch3 on the web and came upon Samsung’s landing page. But the first thing that I noticed is that reviewers gave the watch 2.6 stars out of five. Out of nine reviews, five gave a one-star review. (Update, this dropped to 2.4 with the addition of one more one-star review)

The top one-star review stated that given the price point, some advanced health features like SpO2 (oxygen saturation reading), blood pressure monitoring, and ECG are not enabled in Canada. Other reviews also centered around the high price and missing features.

OK, but what does Samsung say about its products?

It says it has fall detection. If you ever have an “I’ve fallen and I can’t get up” moment, that would help, and unlike that device that was sold on TV, the Galaxy Watch3 uses its accelerometer to automatically detect falls and sends SOS signals to your emergency contact with your location.

I commend Samsung here for this. This is a feature not available on most smartwatches. I don’t ever want to use it and if it were an optional feature that I had to pay for, I wouldn’t, but good to have it. The Galaxy Watch3 has a running guide that helps pace your runs. I think this is really cool from a consumer-grade smartwatch.

I love how you can also estimate your VO2Max on this smartwatch and it gives you advanced running metrics such as the symmetry of your footwork.

“Smartphone-level power is now within reach”

I’m pretty conflicted about this assertion by Samsung.

What does it mean if smartphone-level power is within reach? My interpretation is that I should be able to do much of what I do on a smartphone on the Galaxy Watch3. One major section of that message focuses on messages and replies. And since we’re at it, I’ll talk about emails too.

The great thing about “keeping it in the family” is that the integration between devices is superior. By this, I mean using a Samsung phone with a Samsung smartwatch.

With my Samsung Note 9, I can access my emails seamlessly. I can also access my message logs without installing any other third-party software.

However, I’d caution readers to think hard about whether this is a major benefit. I almost never go through past emails and messages on my smartwatch. It’s just such a chore that can be done much quicker on a smartphone.

The one issue out there is that the email app only displays plain text emails. So that means if an email is heavily formatted, you won’t see any of that. Rather, all text become paragraphs that might not follow a logical order.

Messages are better. You can preview image messages on your phone as you can read them. You can even reply to them if you are paired with an Android device.

In fact, you will be able to reply to any notification as long as it accepts a reply. So your Whatsapp messages, Facebook Messenger, dating apps, can be replied to on your Galaxy Watch3.

Samsung gives you a variety of ways to reply. The most convenient one is to use its speech-to-text function. That is usually the fastest regardless of the smartwatch. Samsung’s speech-to-text functionality is unfortunately a laggard in its accuracy as compared to Apple’s WatchOS or Google’s Wear OS. At least half the time, I find myself discarding the transcription.

This is quite disappointing. Poor accuracy means that my smartwatch is not bringing me any extra convenience but rather it is making things more tedious. Samsung does give you other options to reply to a message including drawing letters, using a pre-composed response, or by using its number pad keyboard (like a 2000s cellphone).

One thing that I really like is being able to make calls on a smartwatch.

It brings massive convenience to my life.

I like going out to exercise and sometimes my phone is somewhere hard to reach. For example, if I’m out on the water, the phone will be in a waterproof bag within a dry bag. That means in order to answer a call, I’ll have to undo all of that.

Whereas with the Samsung Galaxy Watch3, I can answer calls as long as my smartphone is within Bluetooth range.

The sound quality is just OK. I wouldn’t brag about it. It’s a small speaker trying its best. I haven’t heard any complaints from people I’ve called about the sound quality from my microphone, so that’s good.

You can also make calls out with the phone app. The phone app has access to your contacts which makes it easier. Or else, you can enter the number you want to call or use your phone call log to call someone. Bixby is Samsung’s own voice assistant.

But if you noticed how I mentioned above that the speech-to-text functionality is poor, you might be clued in to how this affects the voice assistant.

Bixby seems to have gotten a bit better over time, however, its capabilities lag behind Google Assistant. For example, Google Assistant can help you search the web if you ask it to do something it doesn’t understand. Bixby cannot. Bixby will tell you that whatever you asked isn’t in its capabilities.

I think one of Samsung’s strengths is the watch faces they offer.

What I also like about Samsung’s watch faces is that most of them are customizable. I love having as much information as possible on the main screen so I love the widgets that you can customize.

You can activate apps, exercises, show the battery life, weather, or your agenda with these widgets. It’s great!

The battery life of the Samsung Galaxy Watch3 is decent but be prepared to charge it daily.

I enjoy having the always-on screen mode turned on. I like that because sometimes I want to refer to my watch for some information (hence the widget-laden screens), but I don’t want to twist my wrist in order to wake the screen.

Ever since receiving the watch, I have never managed to unplug the wireless charger. It sits plugged in because I know that I will need to charge it after tracking an hours-long activity or even if I just used it for the whole day.

There are three power settings including standard where everything is turned on, power-saving, and watch only. The last setting means you’ll get a really expensive smartwatch that loses all its smart capabilities. The breadth of apps isn’t the Samsung Tizen OS’s strong suit. My theory is that the Tizen OS has a smaller user base and therefore doesn’t have as many developers building apps for it.

One key app that’s missing is the lack of a navigation/maps app. Apple has the Apple Maps app while Google’s Wear OS has the Google Maps app. Those two are great.

Samsung doesn’t have anything that’s similar, though. Sad. There are a bunch of third-party apps that you can download as an alternative if you’d like.

A reliable maps app is important in my opinion. I really enjoy the convenience of not having to take my phone out when I am navigating. Say, when you are cycling and are going somewhere that is unfamiliar. Having a map just saves the pain of taking out your phone that’s probably tucked away in your panniers or in a sweaty pocket. I have always felt that Samsung’s implementation of their workout and health software has been one of the best. Only Apple and Fitbit can come close.

Wear OS is far less comprehensive although their latest update added a few useful features such as sleep tracking.

Wear OS, by the way, still doesn’t have any swimming tracking which Apple, Fitbit, and Samsung have all implemented in their latest watches. The Samsung Health app on the Galaxy Watch3 can record workouts, sleep, heart rate, caloric intake, water consumption, monitor period cycles, and has a Together function to compete with others.

I really liked the calorie counter app, although it’s much better on the smartphone than on the watch given that the smartphone app can search through local products and immediately input the caloric intake as well as nutritional info.

The Galaxy Watch3 can also track a bunch of exercises from gym exercises to the standard run, bike, and swim. One gripe I have is that it doesn’t have kayaking or paddleboarding.

I find myself, awkwardly, wearing two watches at times in order to get watersports data (and also a map for navigation).

Otherwise, I am quite a fan of the user interface. The design is easy to read and information is forthcoming. There are also lap timers and because the watch has a speaker, you can hear your stats as you exercise.

As stated in the beginning paragraphs, the Galaxy Watch3 has many features that have been disabled  (SpO2, blood pressure monitoring, and ECG). I personally don’t think those features are too important, but some folks might feel a bit ripped off. I love the Samsung Galaxy Watch3. However, I am not sure if I love it enough for me to recommend it over the Galaxy Watch Active2.

I know that it’s a marked improvement over the original Galaxy Watch. Most noticeably, it has a better screen and a better heart rate sensor. It’s also less chunky and lumbering a watch.

But the Galaxy Watch Active2 really feels like it’ll go head-to-head with the Galaxy Watch3 and still put up a good fight. For one, it has a much nicer, bezel-less watch case. I prefer that.

I love how the watch integrates so well with my Samsung phone but I hate how crappy the speech-to-text function is and how limited Bixby is. I love Samsung Health but I dislike the slim app selection. I am so conflicted.