Skip to Content
Garmin's flagship Fenix 6 goes head to head with Samsung's flagship smartwatch, the Galaxy Watch3. It turns out that there's an argument for each of them. 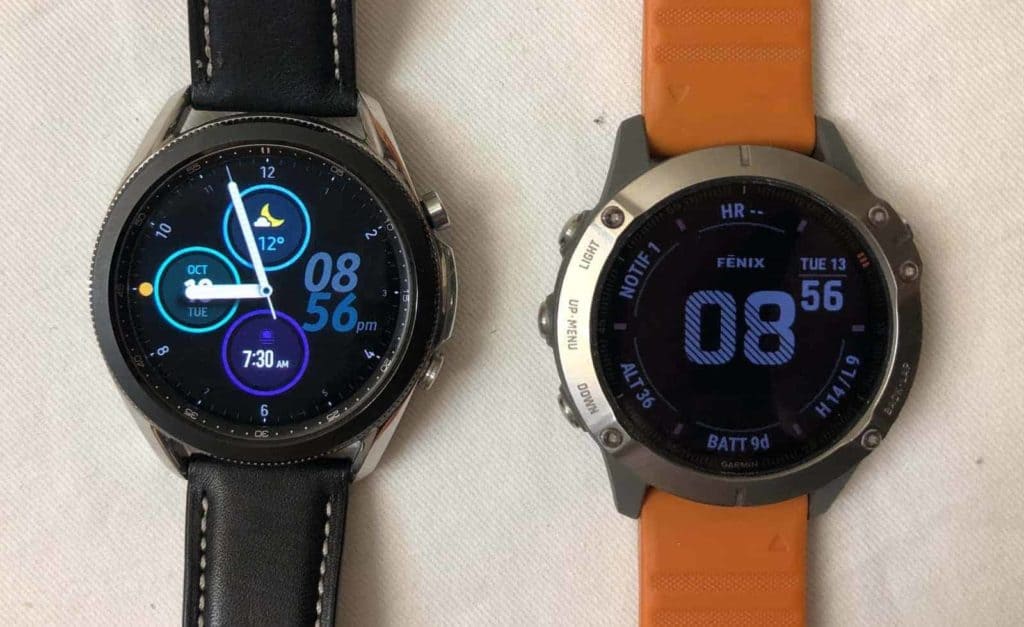 In the summer of 2020, I wore the Garmin Fenix 6 almost exclusively over the months of June and July.

I trusted it. I knew it would last and last. It had a long battery life and a hardiness to it that would allow it to take bumps and shunts.

I also had the Sapphire version which has integrated maps, music and a hardier coating on the screen.

Then in August, I reviewed the Galaxy Watch3. I realized the gravity of the situation:

The Samsung Galaxy Watch3 is the flagship smartwatch from Samsung.

The Garmin Fenix 6 is the flagship smartwatch from Garmin.

But one thing I noticed is that I am not comparing apples to apples.

Whereas Samsung’s line of smartwatches are generally made for the general purpose crowd. But I’ll have to say this smartwatch has some really good sports and lifestyle features too.

The battery life of the Garmin Fenix 6 beats the Samsung Galaxy Watch3 hands down.

With the Fenix 6, I can use it as a watch for nine days straight with the heart rate sensor running and the screen constantly displaying different data including the time.

Two days of straight use of the Galaxy Watch3 would cause it to be very drained of power. A bit like an elected official who lost an election and is just waiting for the handover of office.

The Fenix 6 achieves it’s legendary battery life by using an LCD screen which is visible with ambient light. Whereas the Galaxy Watch3 uses an LED screen that requires backlighting.

The Fenix 6 only requires backlighting when ambient light isn’t bright enough. If you can’t read a book, then you won’t be able to see the screen without turning on the backlight.

And for a sportsperson, having legendary battery life is important. Let’s say you go on a long sport event, like a century ride or a marathon. If you take the Galaxy Watch3, it might not make it through. If you take the Fenix 6, it’ll be just fine.

What’s more impressive is that the Fenix 6 always uses its internal GPS and still has that kind of battery life.

The Solar edition of the Fenix 6 also allows you to charge your watch while you’re doing your activity, so that might be useful for expeditions. 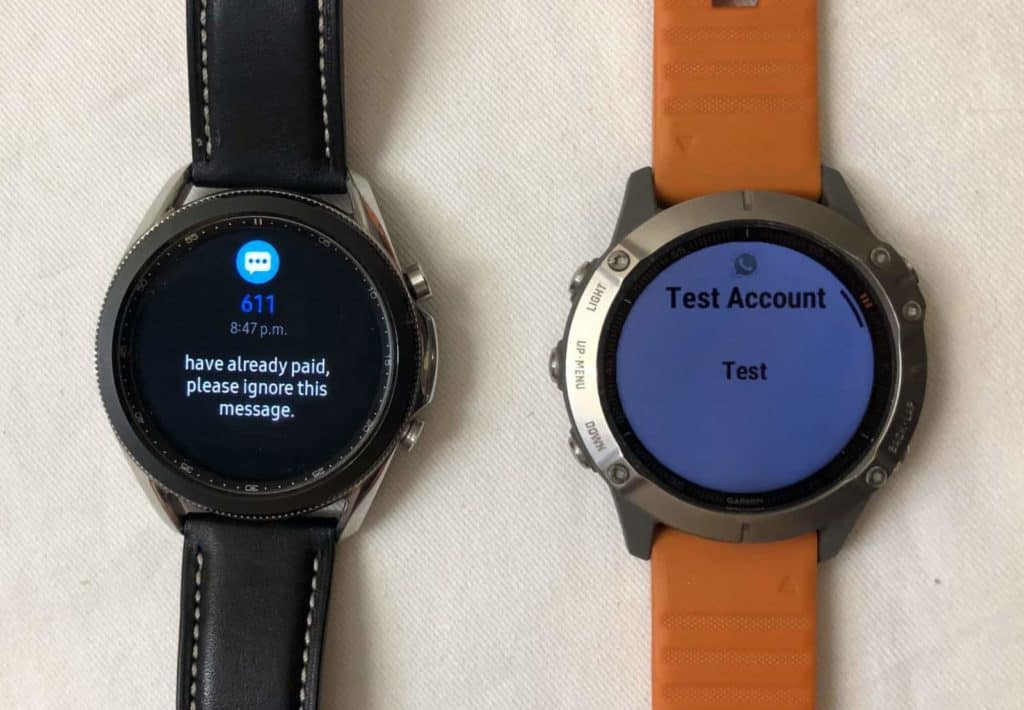 Speech to text, emails and texts

The Garmin Fenix 6 does not have a microphone and therefore it doesn’t have any speech to text faculty.

The Samsung Galaxy Watch3 does have a microphone and a speaker which opens up a range of possibilities.

Let’s say you receive a notification. An email or text has just come in.

On the Fenix 6, you will have to reply using the pre-composed replies that are very simple. They are customizable but eventually you’ll have to resort to your smartphone for anything more complicated.

Whereas on the Samsung Galaxy Watch3, you have a chance of completely avoiding your smartphone even if your message is complex.

When a message comes in, you can reply using a keyboard, by drawing letters to form words, using a canned reply or using its speech to text function.

The speech to text function has really improved over time. I’d say for most messages, it’ll create something that people can understand with a few errors. 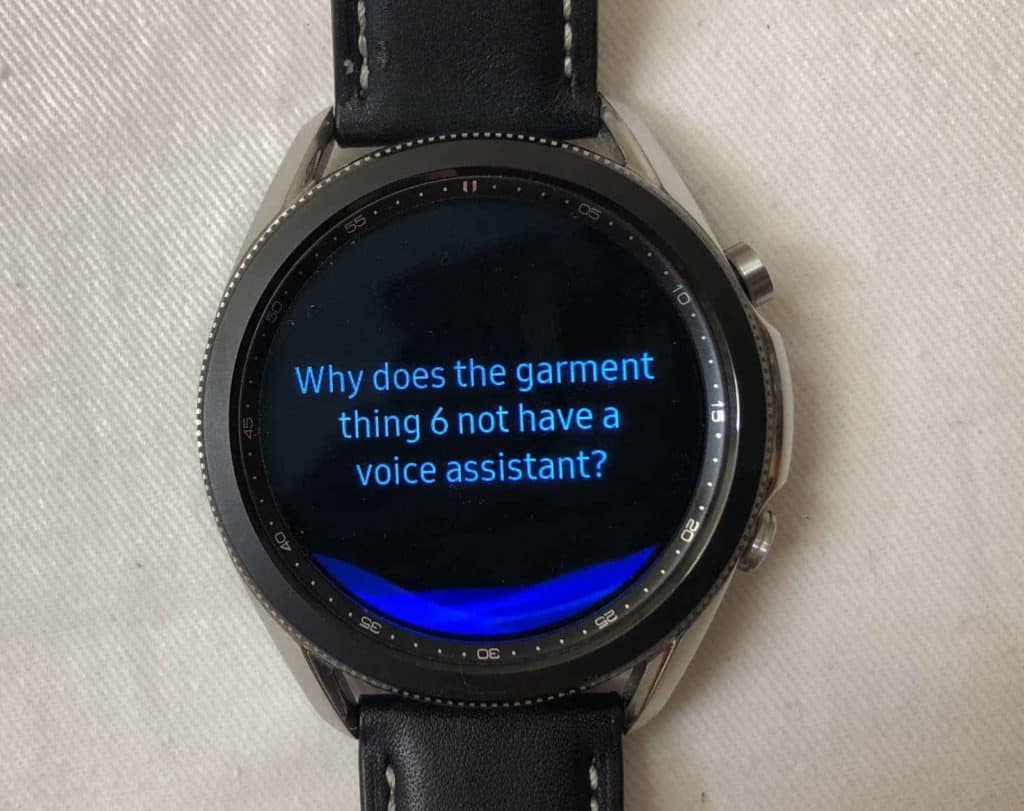 The other major convenience from having a microphone on the Samsung Galaxy Watch3 is the ability to use Bixby.

Bixby is a voice assistant which means you can ask it to do tasks such as start timers, show the weather forecast or do calculations.

This isn’t possible with the Fenix 6. 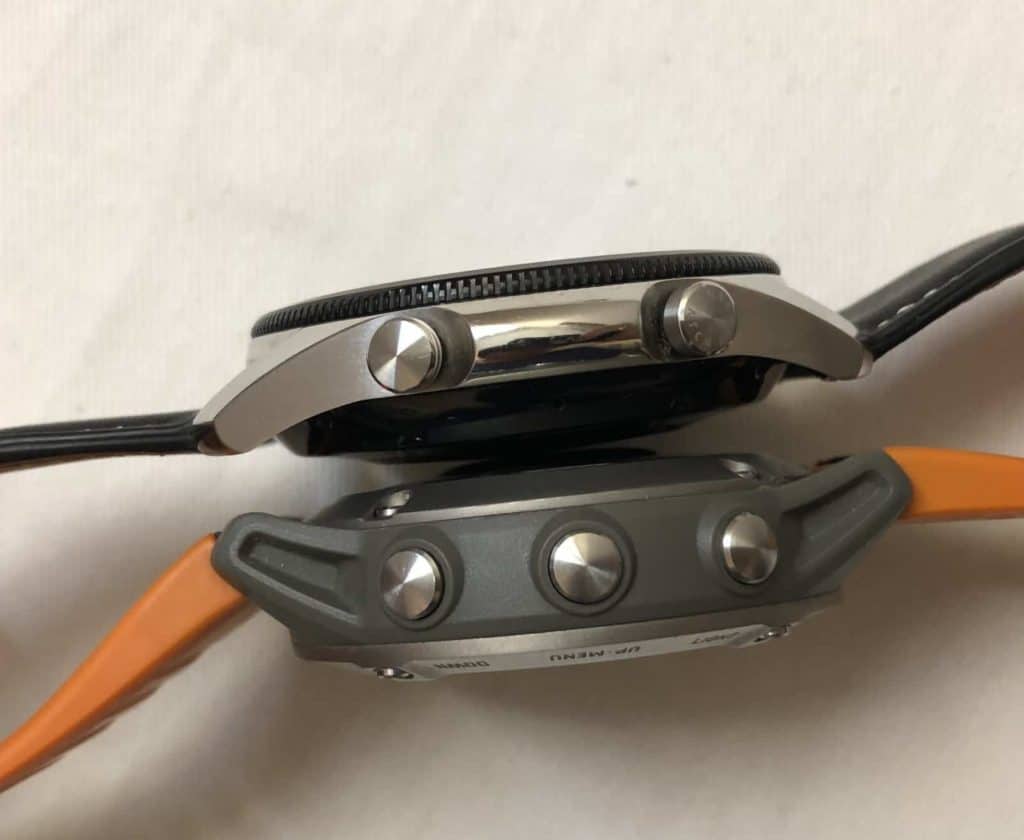 The Samsung Galaxy Watch3 has a touchscreen like a typical smartwatch does whereas the Garmin Fenix 6 doesn’t.

Instead, with the Fenix 6, you will have to interact with the smartwatch through one of its five buttons.

On a day-to-day basis, those five buttons can be confusing and it’s difficult to know which button is the right one to press.

But when you are actively doing sports, having those buttons is a godsend. When I am busy mountain biking, being able to activate or deactivate a function without taking your eyes off the trail is very important. So, a touchscreen wouldn’t work as you won’t get any feedback as to which buttons you’re pressing, unlike a physical button. 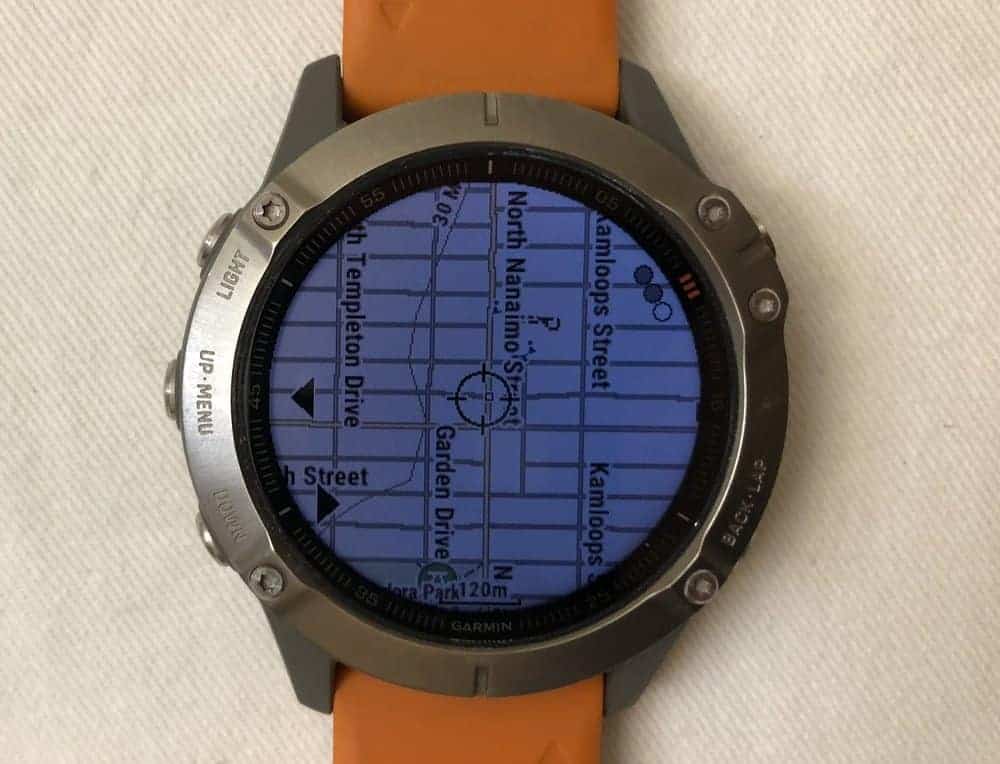 I have the Garmin Fenix 6 Sapphire which has the excellent offline maps from Garmin.

It’s amazing because it’s great when you are exploring somewhere which you have never been before.

Sometimes, when I go out to sea in a new place or visit a new mountain, I want to know where I am.

The Garmin Fenix 6 Pro and Sapphire editions have the offline maps which means that you will always have these maps available. No need for a data connection.

The other important thing is that these maps are pretty reliable. The maps are well marked with trails, park boundaries and elevation markings.

I really like this feature and it really makes the Pro and Sapphire versions worth the extra money. I actually do feel something amiss when I’m in the woods and my smartwatch doesn’t have a map. 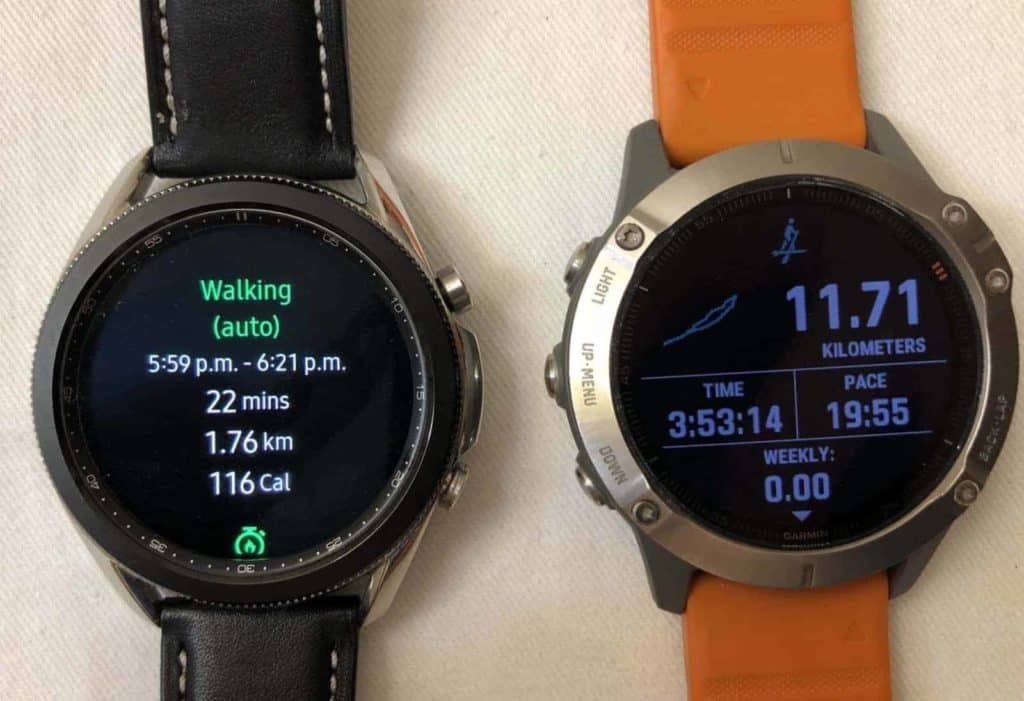 Hands down, the Garmin Fenix 6 beats the Galaxy Watch3.

If you are a person who goes out for hours and hours, you’d love the extremely long battery life of the Fenix 6.

If you are a data lover like me, the Fenix 6 will get you hooked.

One of the sports that I do is paddle boarding. The data you get from the paddle board function is just amazing. It tells you distance per stroke and how many strokes you have done. That’s amazing because no other smartwatch gives this level of detail.

The Garmin Connect app is also amazing because it can help you create different workouts whether you’re a runner or a cyclist.

Samsung does put up a good challenge with its Samsung Health bundle. 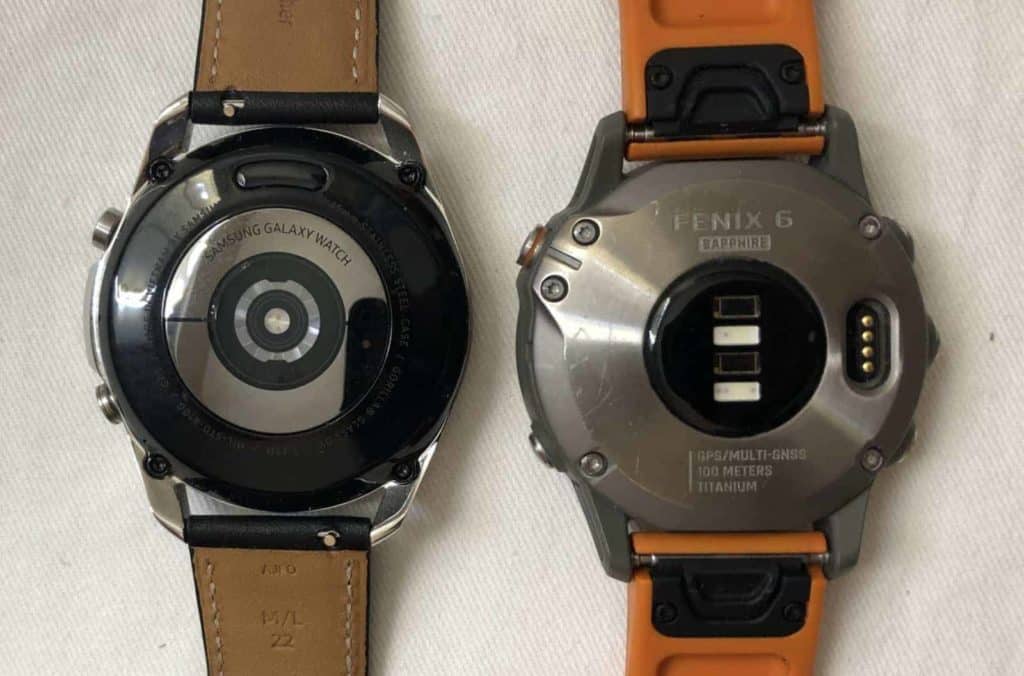 I love that the Samsung Galaxy Watch3 has a running coach function. It’s a pretty advanced function that can tell you about your footwork and VO2Max.

I also love Samsung Health because it’s actually a very comprehensive health tool. I like its weight tracker and calorie counter. There are also some community features where you can sign up for workout or challenge others to achieve a goal.

Most of all, Samsung actively encourages you to achieve daily goals, as represented by a heart. If you hit your move, exercise and active hour goals, you get a full heart.

The number of activities the Samsung tracks is much fewer than the Garmin Fenix 6, so if you have a very niche sport that you do, you might not find it on the Samsung. 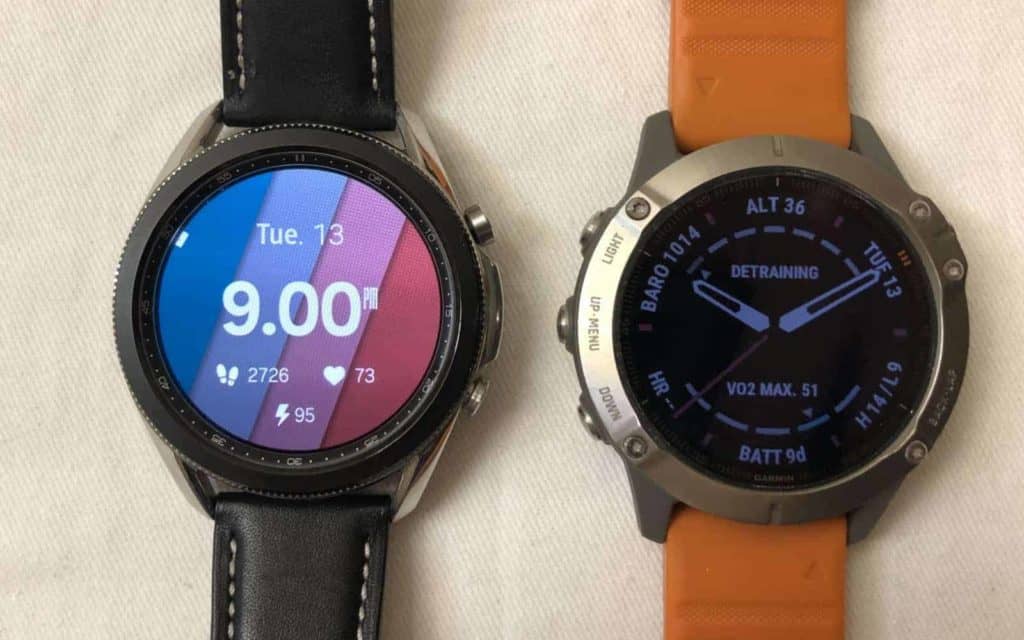 Overall, if you want the best sports data, you can’t go wrong with the Fenix 6. It’s just an elite sports-focused smartwatch whereas the Samsung Galaxy Watch3 is a general purpose smartwatch with above average sports functionality.

If you are going for the Fenix 6, consider whether you need offline maps, because the base model doesn’t come with it. But I find the Pro/Sapphire versions to be worth the extra money just for the maps.

Day to day, I love the Samsung Galaxy Watch3 more. It’s able to get more done without making you reach for our smartphone.

However, if I ever went on another expedition, or deep in the wilderness/outback/bush, the reliability, battery life and offline maps of the Garmin Fenix 6 is unbeatable.