Skip to Content
The Ticwatch S2 is marketed as a sport smartwatch and so is the Suunto 7. But why do I have such a preference for the Suunto 7 in all aspects except price? 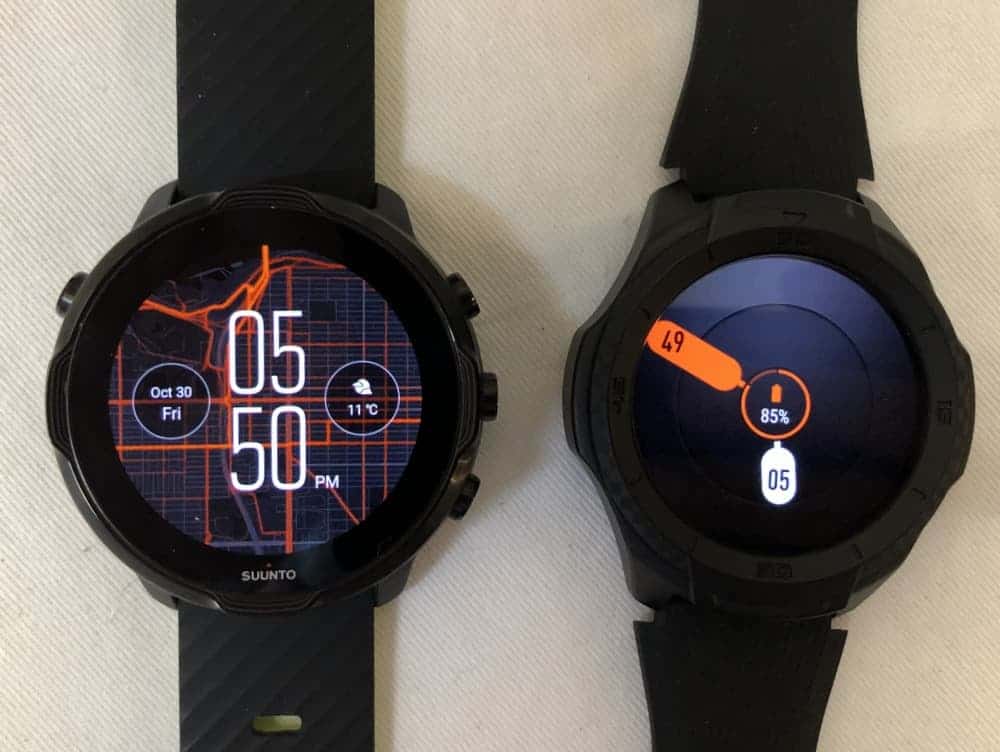 Hmm, is it possible to market something so well that people believe in what you say, even when it’s not really the case?

Well, that’s the question I have when we’re talking about the Ticwatch S2.

The Ticwatch S2 is a watch that Mobvoi markets as a smartwatch suitable for outdoors enthusiasts. On their website, they feature people doing hardcore stuff like mountaineering and surfing.

Except, in my experience, the Ticwatch S2 isn’t that “hardcore” of a watch. But their marketing makes it seem like it can punch above its weight.

On the other hand, the Suunto 7 is a really interesting watch which likes to shout its Finnish heritage. Helsinki is featured everywhere. 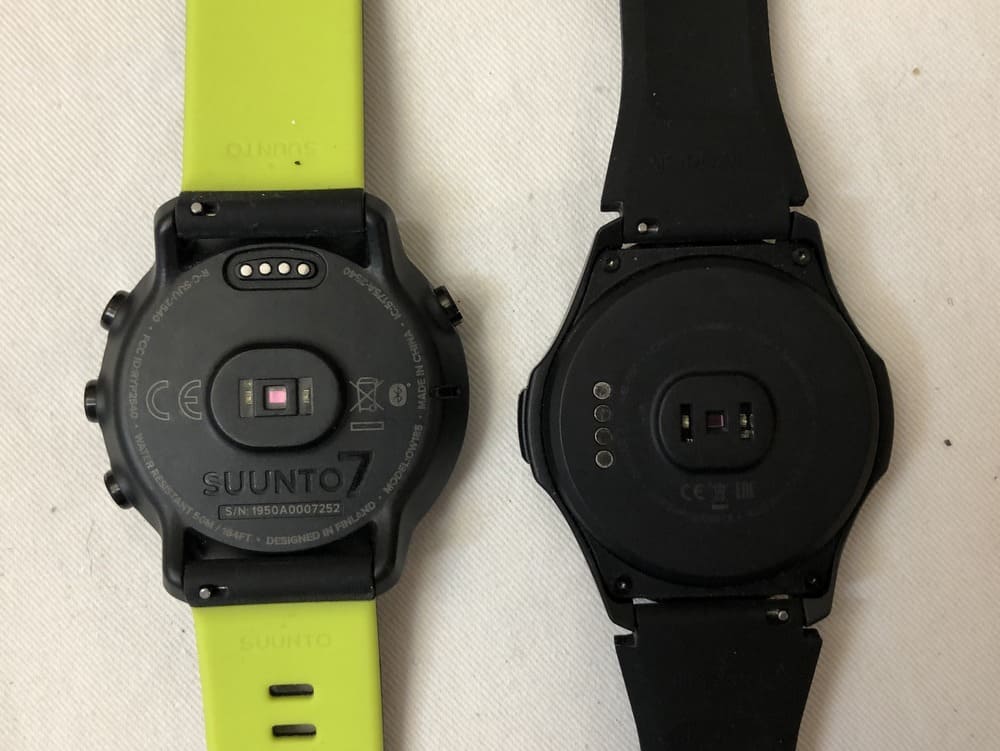 Both smartwatches really don’t differ much in terms of their size, weight or features. Flip both smartwatches over and you notice that the heart rate sensor looks very, very similar. Turn on the smartwatch and you see the Wear OS operating system’s utilitarian user interface.

But if both smartwatches are meant for sports enthusiasts, how come there’s such a major difference in price?

There are two reasons within this segment that creates the case for the higher price of the Suunto 7: offline maps and custom sports tracking software 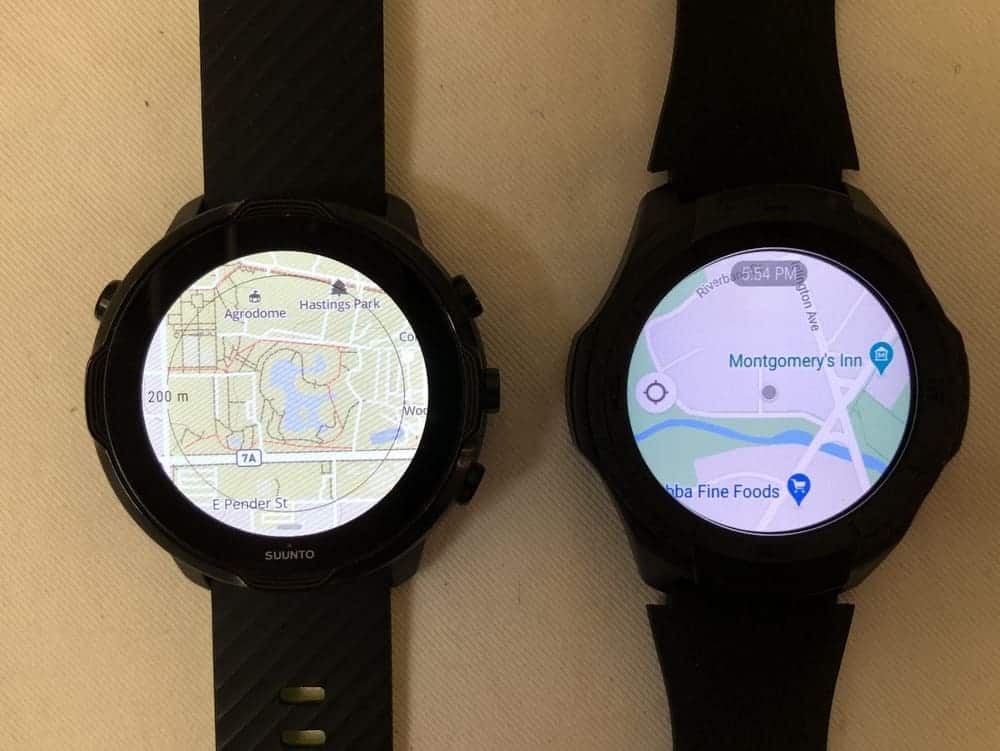 The Suunto 7 is one of the few smartwatches that have offline maps and that’s really important.

It’s one of the two features that really sets the Suunto 7 apart from most other Wear OS smartwatches including the Ticwatch S2.

In the image above, the Ticwatch S2 on the right has Google Maps displayed. Google Maps requires an active data connection from your phone in order to work. Not good if you are headed into the woods.

Offline maps are very important to me. I like exploring new forests and waters so oftentimes that means I will get to a spot where I will have no idea what to do next.

It’s a lot more convenient to see a map right on your wrist than it is to pull out your smartphone. Especially when you’re out at sea. 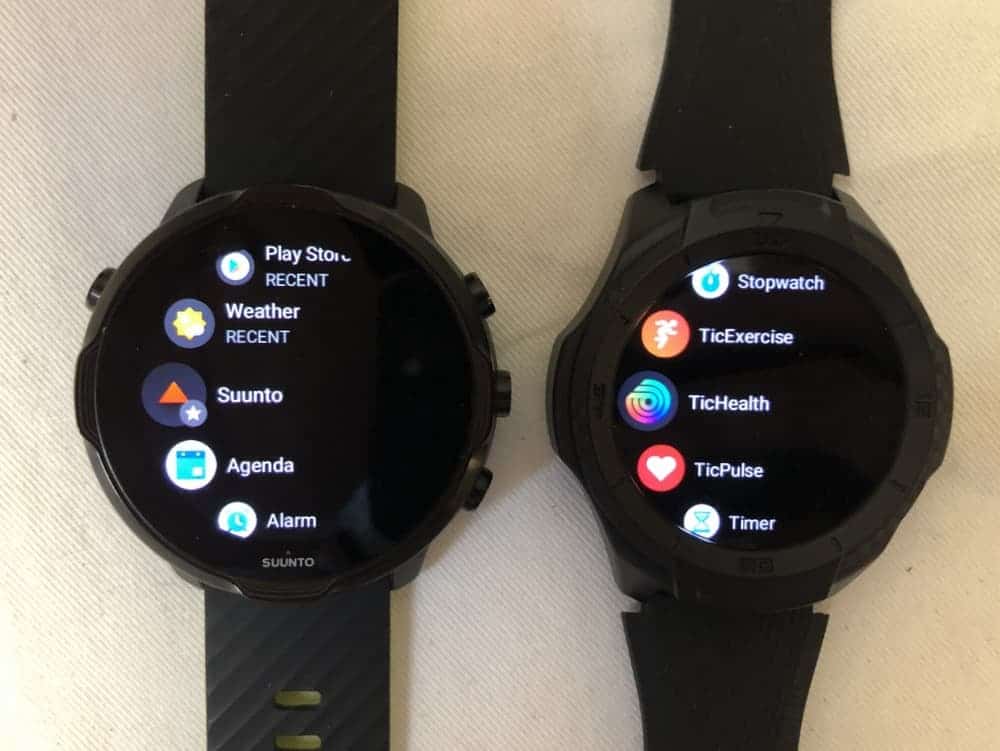 The Suunto 7 comes with the Suunto app which makes all the difference.

On the Ticwatch S2, I have a preference for the Google Fit suite (as compared to Mobvoi’s own suite of sports apps).

You get better data, 70+ workout choices and great analysis of your workouts.

What really sets the Suunto 7 apart is the PTE and EPOC measurements. These measurements are useful in telling you whether your workout is helping you progress and how intense it was.

You also get a recovery time number to tell you how much rest you should schedule before your next workout.

On the Ticwatch S2, you won’t get these bits of information. The data on Google Fit is much more rudimentary. On a bike ride, you can get your average speed, heart rate, Move Minutes (a figure consisting of intensity and time), distance and calories.

The Ticwatch S2 also has Mobvoi’s suite of TicPulse/TicHealth/TicExercise apps, but I have found that these apps have lost a lot of its relevance after Google Fit started including features that were unique to the Mobvoi apps.

There isn’t much reason to use that suite of apps unless you want something to remind you to hit a certain amount of steps per hour or you need to track swims because Google Fit doesn’t.

For a while, the Suunto 7 has had the best hardware specifications a Wear OS watch could have.

It comes with the Snapdragon 3100 processor and 1GB of RAM.

Whereas the Ticwatch S2 comes with the low-end spec of having a Snapdragon 2100 processor and 512MB of RAM.

Wear OS has become much better over 2020, but the difference between the two hardware specs are noticeable when an update is running in the background and you want to do something on the watch simultaneously.

On the Ticwatch S2, forget it. It will seem laggy and unresponsive. On the Suunto 7, I won’t recommend it, but it has a better chance at keeping your sanity if you decide to do it anyway. 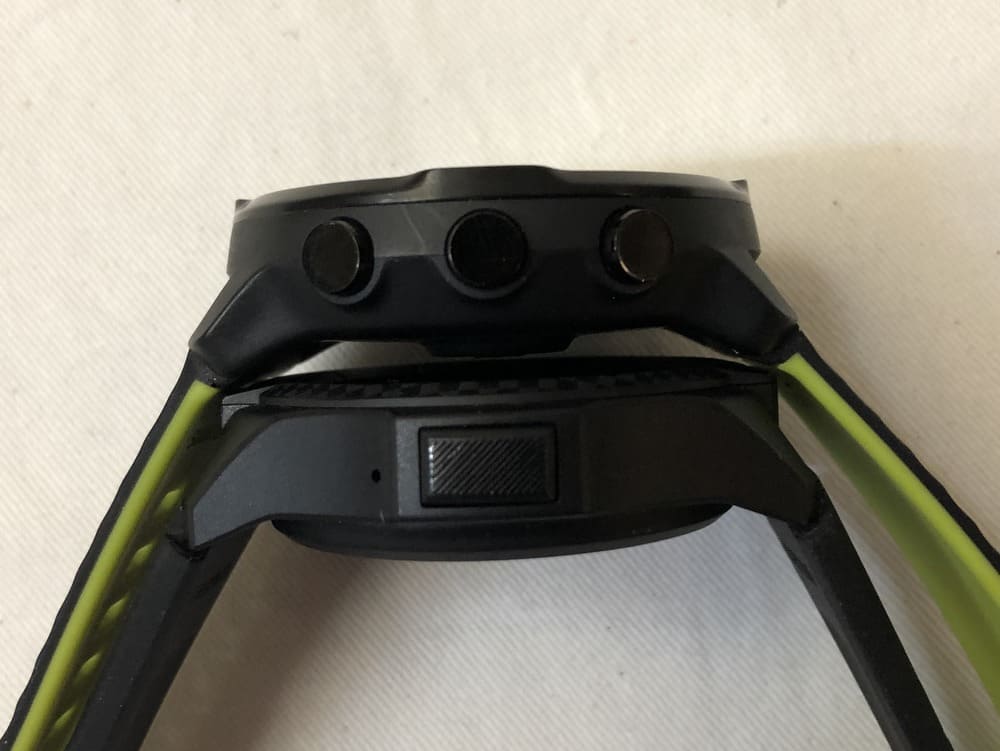 When it comes to smartwatches, “less is more” is true.

That’s generally not a problem if you are not exercising. But if you are cycling and can’t tap precisely, then it becomes a problem.

It’s a lot easier to start a timer, change music tracks and start a workout on the Suunto 7 because each button has a specific function.

Whereas with the Ticwatch S2, the sole button means that it functions very similar to the sole button on the Apple iPhone. It takes you back to the main menu and opens up the apps menu. If you long-press it, it fires up Google Assistant.

Everything else on the Ticwatch S2 is done through tapping and scrolling.

What I like about having more buttons is that I can easily track laps when I exercise and I can skip music tracks easily on the go by pressing just one button. 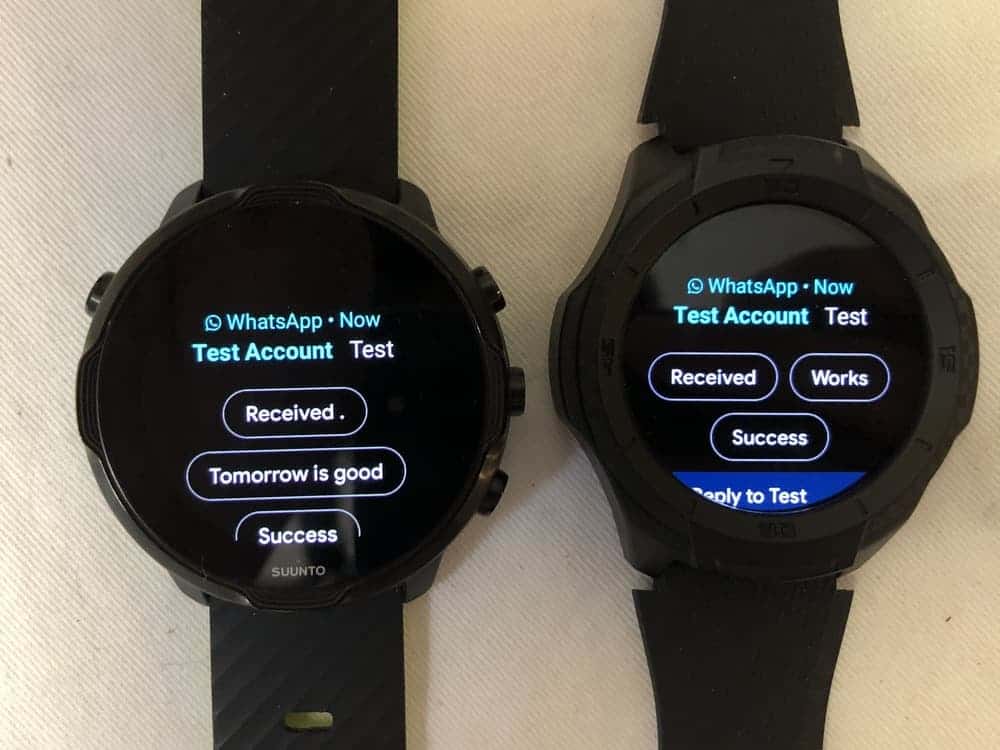 Yikes! This is where the Suunto 7 has to come down from its pedestal.

In terms of messages and emails, you’d find that the Ticwatch S2 and the Suunto 7 will show the same menus, the same methods of replying and the same interface.

That’s a good thing for both users, though. Google’s speech to text system is very good and that means when you’re out in the water and need to reply to someone, you can conveniently and reliably do so with either smartwatch.

This is a feature that’s not available in higher end smartwatches from Polar or Garmin. A real pity. 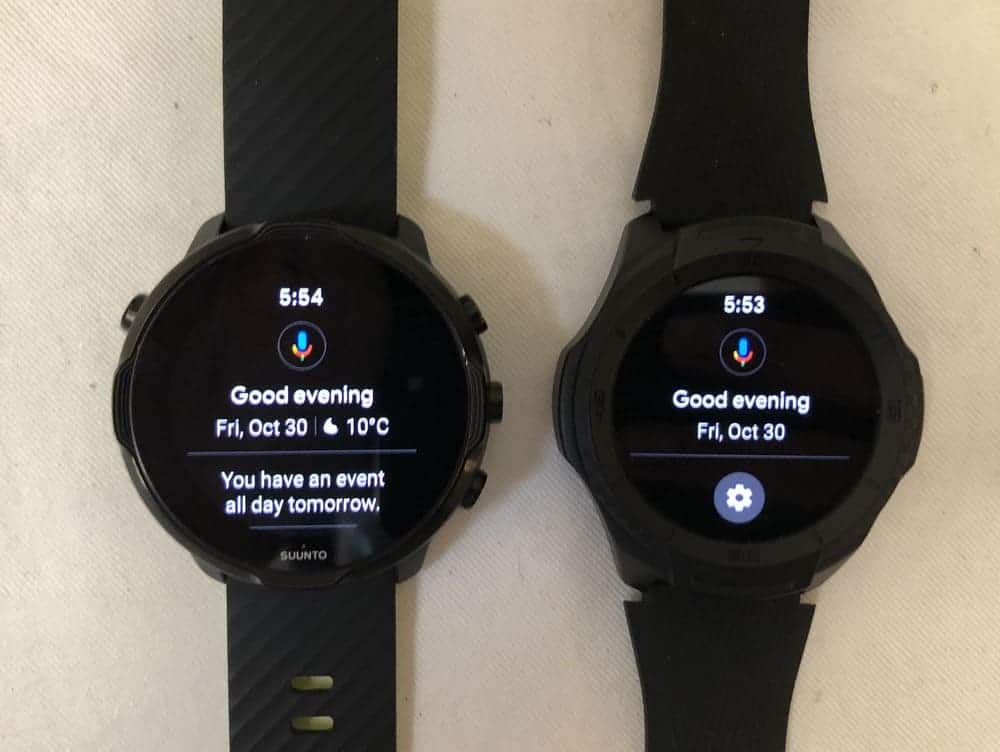 Both smartwatches have access to Google Assistant which is great because it’s one of the best voice assistants out there.

Google Assistant really brings you a slew of conveniences. It’s not as good as its Android counterpart but it’s good enough to help you avoid tedious tasks.

For example, if you wanted to start a timer, it’s a major pain to do so on your watch because you have to find the app, then manually enter the amount of time you want for the timer to run.

With Google Assistant, all you need to do is to tell it what to do.

That’s really great if you want to find out about the weather in another location or to search up information (which Google Assistant will put through Google’s search engine).

When it comes to the Suunto 7, you really do pay for what you get.

The Suunto app is just excellent. The offline maps are even better.

If I were flush with money, I’d get the Suunto 7 if it were between the two smartwatches.

But some people are seeking better value, and the Ticwatch S2 can offer you great value.

As stated, the productivity enhancing features are the same. It’s only when it comes down to the three big advantages of the Suunto 7 does the “Designed in Finland” watch leave the Ticwatch S2 in the dust.