Skip to Content
The Ticwatch Pro 3 and the Fitbit Versa 3 are great smartwatches but they serve slightly different purposes. 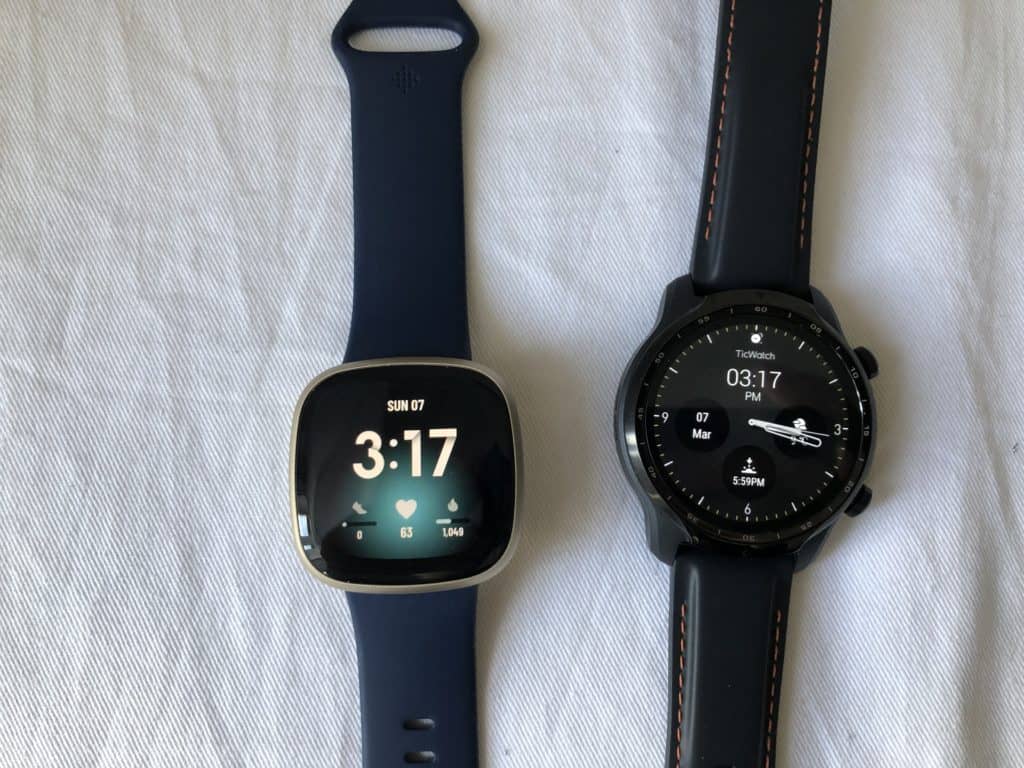 Mobvoi’s Ticwatch Pro 3 is one of the best Wear OS smartwatches that I have used.

It really sets the bar for all Wear OS smartwatches because it’s just so good.

That’s an amazing smartwatch that you should go for if you just want the absolute best.

But the Fitbit Versa 3 isn’t even that bad. It’s really comparable to trim levels on a car.

The Fitbit Sense is the top trim level while the Versa 3 is the base level of the flagship range.

So how does this stack up to the Ticwatch Pro 3? 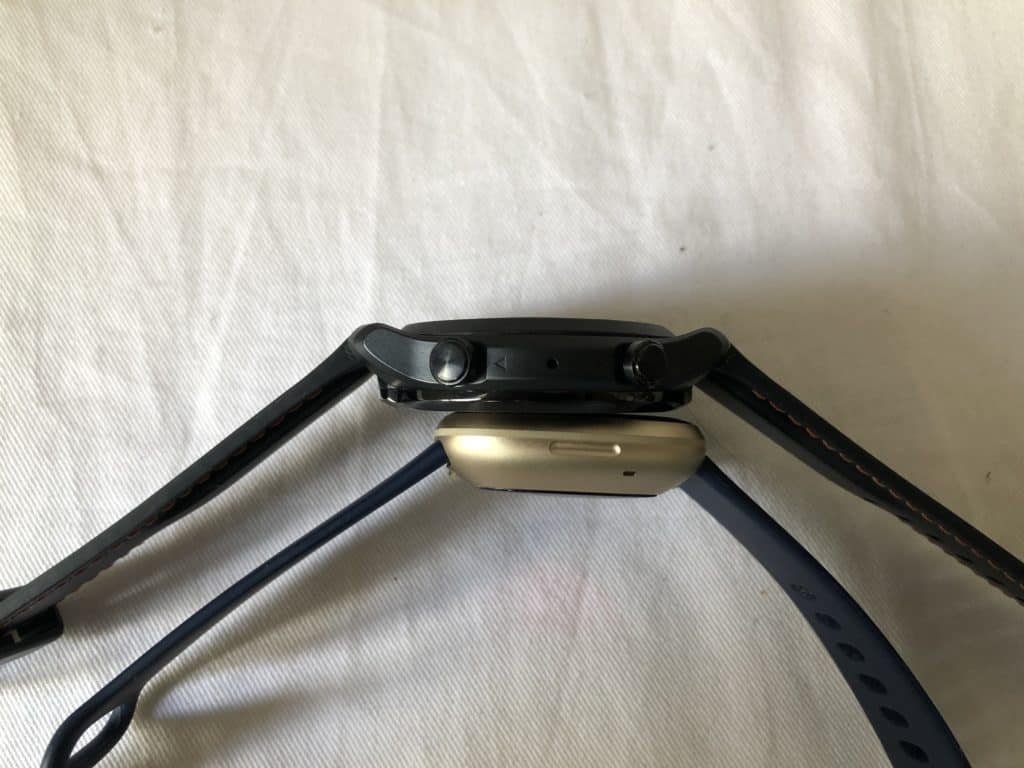 The Ticwatch Pro 3 takes on a very elegant and classic business casual look. It’s black all around with two buttons and its strap is made of silicone with red stitching.

I think it looks very modern, casual and youthful.

The Fitbit Versa 3 is even more youthful. It’s like a Mini or a Fiat 500 with an emphasis on rounded edges and corners. Everything just looks so friendly.

The strap from Fitbit is called the Infinity Band. I really like it because it is very easy to use. Its blue silicone material also complements the blonde watch case which makes the Fitbit Versa 3 much more friendly looking.

The designs of the watch face that comes by default should be telling on what both manufacturers think of their smartwatches. 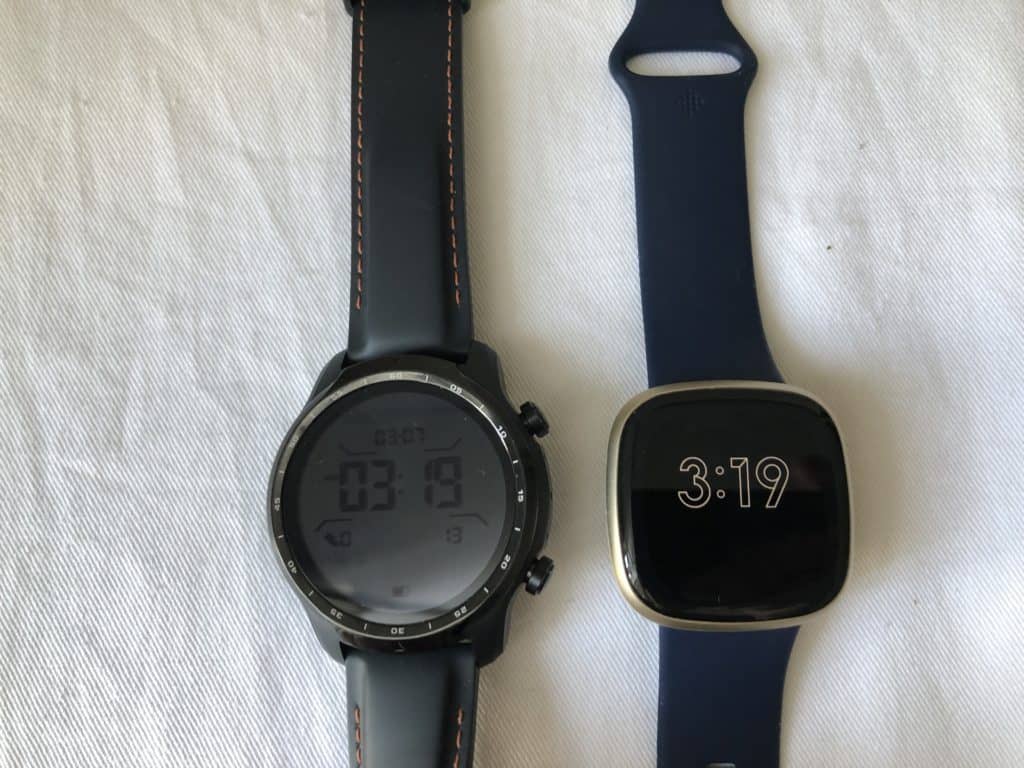 Certainly, you want a smartwatch because you needed something that’ll tell you the time.

But I bet you also want something that can make your life easier.

If you find yourself missing notifications often because your phone is away from yourself or deep in a bag, the good news is that both watches handle notifications very well.

In fact, with the Fitbit Versa 3’s new update, everything has become even better.

These features have already been implemented on the Ticwatch Pro 3 since day one, as with any other Wear OS watch.

And because the Fitbit Versa 3 has gotten this latest update, it’s just so much more useful than it ever was. It’s a SMART watch now.

Why? In the past, it used to be just OK when it was relying on Amazon’s Alexa. I wasn’t a fan because it would tell me the weather in Wilmington, Ohio, even though I don’t live there.

Google Assistant is very accurate and very helpful. It understands what you’re saying.

Both watches have it so it’s really a tie here.

When it comes to messages, there’s really not much difference. I mean, the Ticwatch Pro 3 can reply to messages using its on-screen keyboard and handwriting feature, but I would almost never use those because I’d go straight to my phone if I had to type out a message. So, if we were using the speech to text system to reply to messages, both would be equal.

Let’s talk about calls. I think one of the best conveniences of a smartwatch is the ability to answer calls. Sometimes, people call you when you are unable to reach for your phone, say, if you were on a kayak and your phone was somewhere deep in the drybag.

This is where it gets really helpful to have this feature, and I am happy to say both smartwatches have this feature now. The Fitbit Versa 3 did not until it got a software update a while ago.

The sound quality on both is not very good. They’re OK for short conversation but anything longer you’d go straight for your phone.

But it’s nice that both smartwatches have this feature. Fantastic! 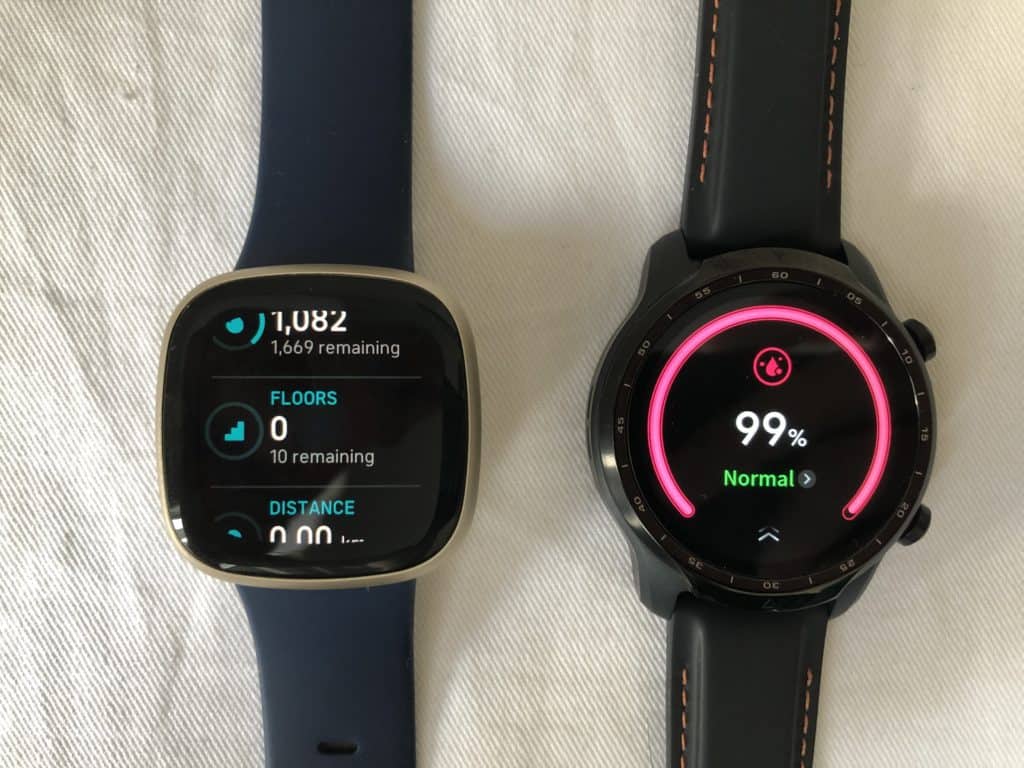 The Fitbit is especially marketed as a watch for health improvement and I put that to the test.

The Fitbit OS doesn’t joke about this. Straight out of the box, it immediately shows you your health metrics on the watch face. Scroll down and it gives you a summary of your activity today.

If you work from home, prepare to see all these stats suffer.

No such guilt on the Ticwatch Pro 3, though. You’d have to specifically choose a widget that would tell you about your steps and active time.

The Fitbit Versa 3 has the most vaunted metric of 2020 — the blood oxygen meter. Both smartwatches can shoot out a red light on the rear and give you a reading of how saturated your blood is with oxygen.

The Ticwatch Pro 3 takes it further with other metrics that it can track including stress and noise.

However, what I think the Ticwatch Pro 3 doesn’t offer in this regard is in the app. The Fitbit app is amazing in that it offers you many programs and analysis whether for fitness, mindfulness or something else. 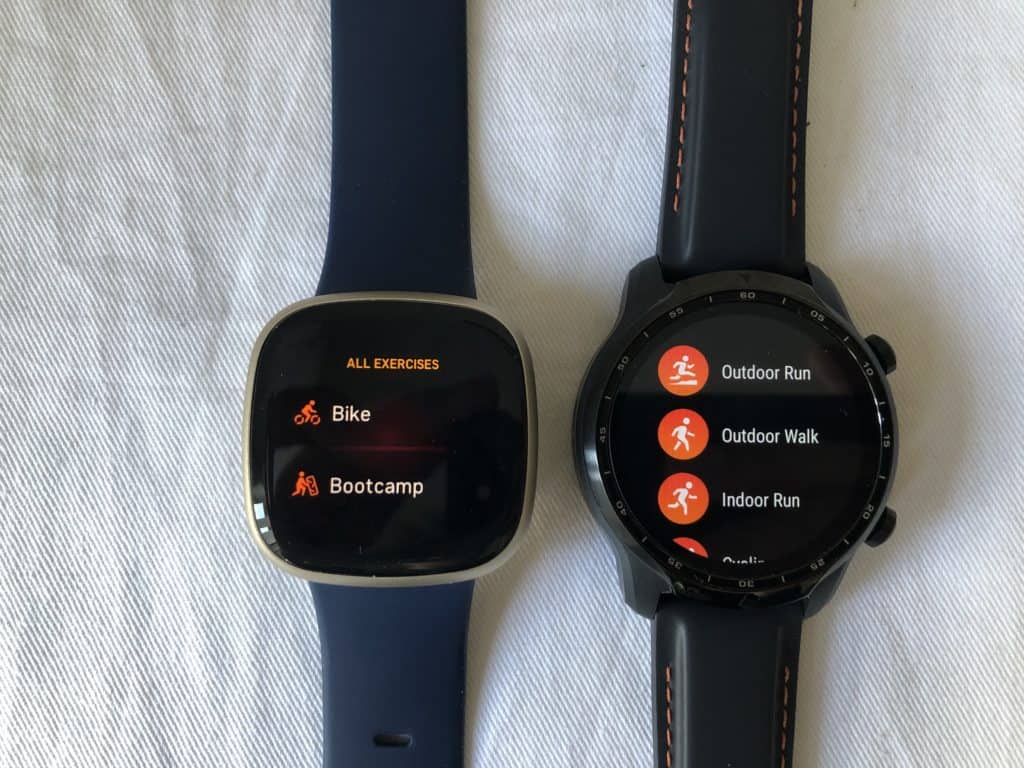 One of the biggest reasons why like wearing a smartwatch is to track my workouts in order to ensure that I am doing it for long enough and intensely enough.

Apparently, users of the Fitbit Versa 3 have complained that the heart rate sensor isn’t accurate, so you should be aware of that.

The Ticwatch Pro 3 is good in that it has its own suite of exercise tracking apps including TicHealth, TicExercise and TicPulse.

The great thing about the Ticwatch Pro 3 is that the TicExercise app uses the low-power LCD screen to display data, meaning your battery life can go further all while allowing you to see vital information like your heart rate.

The downside to both smartwatches is that they have very few choices of workouts that you can choose from. That’s why on my Fitbit app you’ll see me cycling on water. 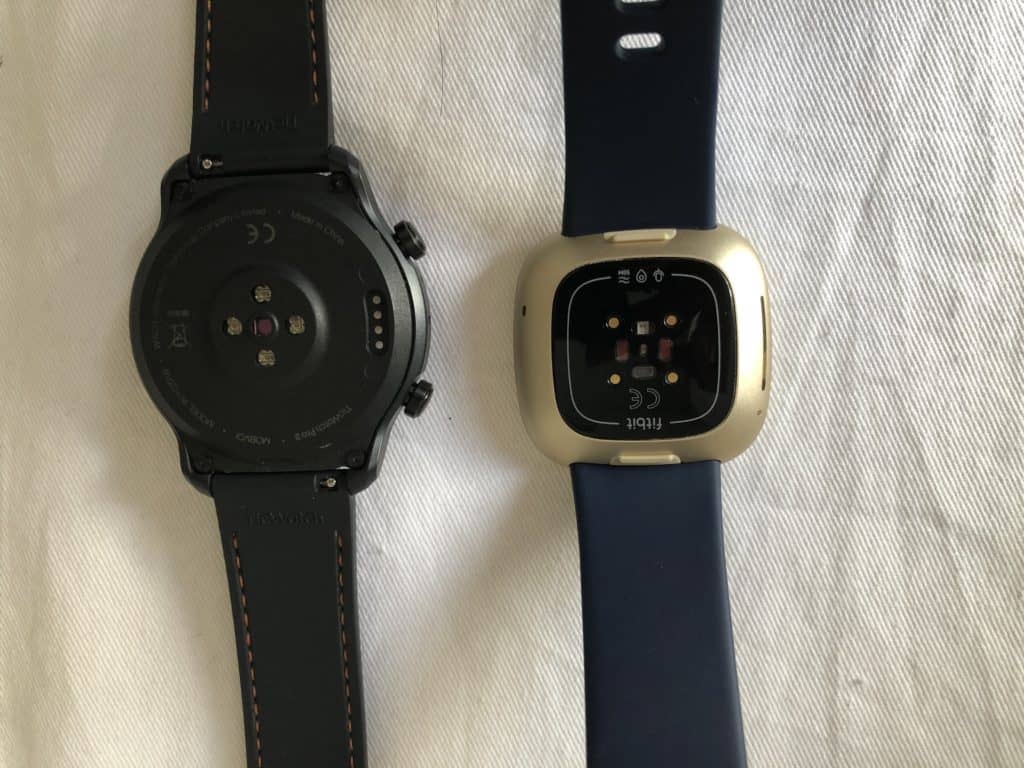 Both smartwatches are very good.

If I had to pick between them, a major consideration would be the way it looks. I really like the way the Fitbit Versa 3 looks, and it’s a very comfortable watch to wear. Its flat profile makes it very comfortable for overnight wear for sleep tracking purposes. The Ticwatch Pro 3 less so.

The Fitbit Versa 3 is a great smartwatch and you’ll honestly get many features of the flagship Fitbit Sense without the extra expense.

The Ticwatch Pro 3 is a much more productivity focused smartwatch and it’s the one I’d recommend if you want a general purpose smartwatch that has a really good suite of productivity enhancing features.