Get to know the different types of pens or writing instrument that have been used from the earliest times to the modern day. We've got it all covered from reed pens in ancient Egypt to the convenient pens for lefties and from feather quills of the 6th century to the stylus pens of today. 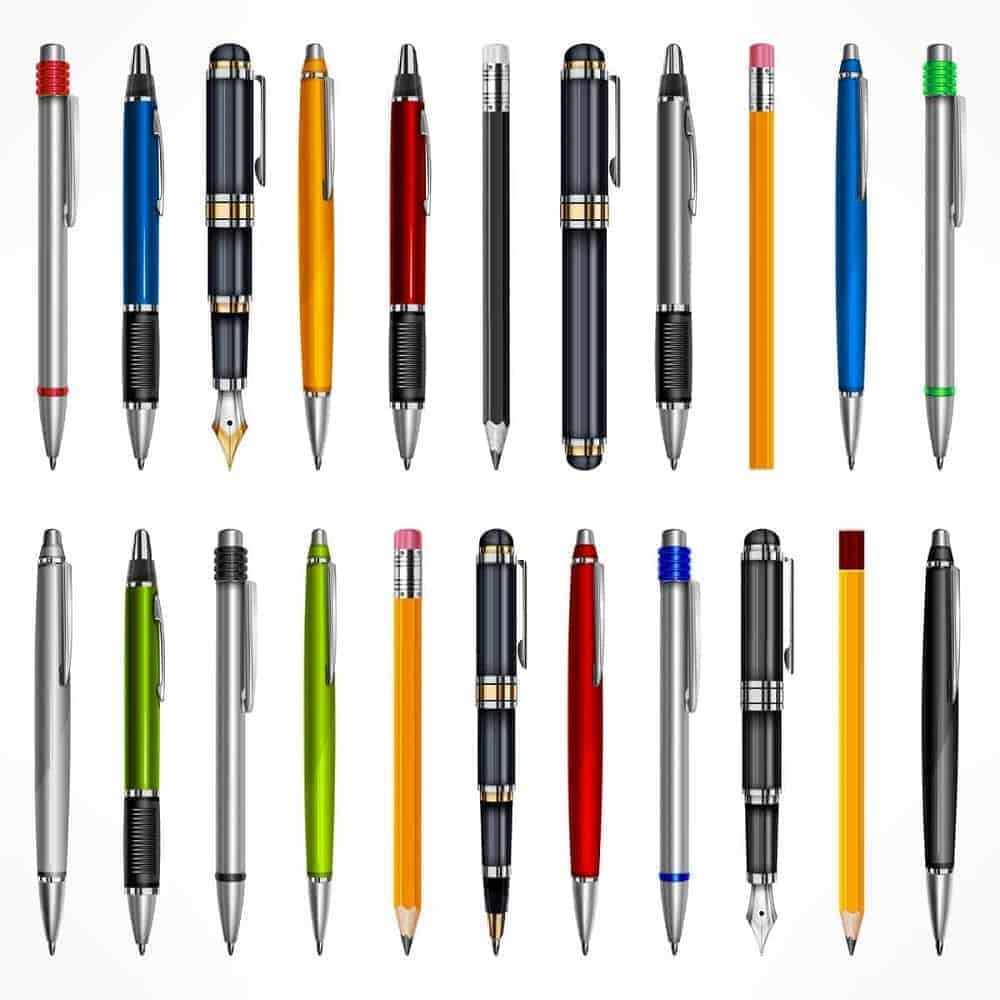 Why are pens on a fashion and apparel website?

I’ll tell you why.

Pens are essentially a writing instrument used all over the world. They provide us with the ability to control the application of ink onto a surface. This surface is usually made of paper and pens are mostly used to write or draw.

Historically, there were many different types of pens including reed, quill, and dip pens. Modern types include more popular and efficient versions including felt, fountain, rollerball, and ballpoint, as well as many others.

While most businesses are slowly going paperless, pens are still used every day by millions of people around the world since they have become an integral part of many activities. Many institutions like education, businesses, politics, and art depend on the existence of pens. Moreover, writing by hand has multiple benefits including improving memory, learning, and creative expression!

Here are some of the most popular types of pens. Reed pens are made from cut bamboo or reed. They have a slit on top with a narrow tip for writing. It isn’t popularly used anymore. However, it was the main writing tool for ancient civilizations, especially in ancient Egypt in the 4th century BC. In modern times, some students in Pakistan and India are taught with reed pens on timer boards; this practice is known as “Takhti”. Other than this, reed pens are used no more. Quills are usually made from the flight feather of large birds like geese. They were used before metal dip pens like fountain pens and ballpoint pens emerged as the main instrument of writing. The quill replaced the reed pen since it was easier to hold, soaked in more ink, and lasted longer. They have a spilt-nib and enhanced the writing style with their capillary action and increased anchor to gravity. They were the most important writing tool in Western countries for a long time, especially between the 6th and 19th century. The ink brush pen was the main writing tool in East Asian calligraphy work. The body of the brush pen was usually made with bamboo but some elites also used gold, silver, red sandalwood, glass, and ivory. The head of the brush was made with feathers or hair of different animals including rabbit, deer, chicken, and more. An old tradition of Japan and China was to make the ink brush with the hair of a newborn as a once-in-a-lifetime gift.

Dip pens, or nib pens, are designed with a metal nib and capillary channels. Their holder or handle is often made of wood. The dip pen doesn’t have an ink reservoir and needs to be constable dipped into an ink well for use.

It offers certain advantages that fountain pens don’t. The dip pens can function properly with waterproof pigmented inks including acrylic, drawing, and India ink. These inks would normally clog the fountain pen. You can even use traditional iron gall ink for a dip pen, which would cause the fountain pen to corrode. Dip pens can be used to draw illustrations and comics, as well as for calligraphy. Fude pens are also known as brush pens. They are a cartridge-based writing instrument that is popularly used for East Asian calligraphy. They are a mixture of ink brush pens and fountain pens.

The pen nib has a brush-like quality made with brush strands or soft felt tips. The nibs are fed by an ink reservoir and most times the ink isn’t a traditional calligraphy ink. Keep in mind that only the fude pen with traditional ink adheres well to rice paper while new pens are made for modern paper. Ballpoint pens are used with oil-based inks. The ink is rolled into a hard sphere of 0.5-1.2 mm. It can be made of tungsten carbide, steel, or brass. The ink is designed to dry immediately as soon as it comes in contact with the paper. Ballpoint can also combine multiple colors in a single barrel and the writer or artist can depress whichever color they want to use.

It is really reliable and lasts for a long time. Adequately expensive, as well as, inexpensive types of ballpoint pens are easily available in this market. This is one reason why it has replaced the fountain pen as the most common writing tool. The first ballpoint was invented in 1888 but there were some problems with the design. Later, the design was improved in 1938 by László Bíró. Rollerball pens were invented by Ohto Japan in 1963. These pens are used with gel ink or water-based liquids. The design is similar to that of the ballpoint since it also has a ball tip. The ink used in these pens is less viscous than oil-based inks, which allows the pen to move more smoothly over the paper. The rollerball pens combine the smooth “wet ink” of fountain pens with the convenience of the ballpoint pens. The first rudimentary design for fountain pens emerged in the 10th century but working models were finally invented in the mid-19th century. Fountain pens are used with water-based liquid ink, which is less viscous than oil-based inks.

The ink is delivered through a nib from a reservoir through capillary action and gravity. The nib isn’t designed with moving parts but rather delivers the ink through a thin slit onto the paper. Reservoirs for the fountain pen are usually refillable. However, in many cases, disposable ink cartridges are used.

The refillable fountain pens are designed with a piston-like mechanism so that it is easy to draw the ink from the ink bottle through the nib. Some fountain pens are filled with eyedroppers but this can take too long. Refill reservoirs are also known as cartridge converters.

Marker pens, or felt tip pens, were invented in 1910 but they didn’t become popular until later in the 1950s. Felt tip pens are made with a porous tip with fibrous materials. The marker pens with the finest, smallest tips are used to write on the paper.

Medium-sized ones are often used for drawing or coloring by children. Larger types are called “markers” and are used to write on large surfaces like a chalkboard, whiteboards, and corrugated boxes.

Marker pens with bright but transparent inks and wide tips are referred to as highlighters. They are often used by students and professionals to highlight text that has already been printed or written. Pens for temporary writing like on whiteboards are usually filled with non-permanent inks. Other markers are filled with permanent ink to write on boxes or paper. Gel pens use inks in which the color pigment is suspended inside a water-based gel. The ink is opaque and thick, which allows it to show up more clearly on slick or dark surfaces than other popular pens.

Gel pens are mainly used for illustrations and writing since they often come in bright neon colors. Recently, their use has grown to color in mandalas. They can be used on non-absorbent and smooth materials since they are less likely to bleed through the other side of the paper. The ink and gel pen allows finer, controlled lines of color. Stylus pens are also called styli or styluses and are narrow, elongated pens like a ballpoint pen. It is a small tool or writing utensil that is often used to mark or shape other items like in pottery. Stylus pens are also used as a computer accessory that assists users to navigate through the device.

It enhances precision while using touch screens, which makes it popular for sketching or coloring on tablets or iPads. Some pens are made with a ballpoint tip on one end and a touch screen stylus on the other end. Ruling pens are mainly used as a drawing instrument with fluids and ink. The pen contains ink inside a slot between two metal jaws. The flexible jaws are tapered at a point in the pen. This enables them to make precise rendering with very thin lines. The width of the line can also be adjusted via the screw that connects the jaw.

Previously, ruling pens were only used for technical drawings with straight rulers and French curves. This is because many fields like cartography or engineering require a certain level of precision. Today, it is mainly used for calligraphy or picture framing. In the Soviet Union, ruling pens were mostly used by women as tweezers to remove eyebrow hair. Technical pens are specialized tools that are used by a drafter, engineer, or architect to make lines. They ensure that a constant width is maintained to provide accuracy in engineering, technical, or architectural drawings. They are made with either a replaceable ink cartridge or a refillable ink reservoir.

The Graphos introduced the first technical pen in 1934. This pen was designed to make points interchange easily and miniaturized the caliper principle. The Sheaffer Company even improved the design to make an expensive drafting set that could be used on linen prints.

Skin pens a specially designed so the ink can be applied onto the sink. Skin pens are also known as dermis pens since they are usually used by surgeons before surgery to mark the body for cosmetic or medical purposes. The sterile surgical pen was first invented in the 1970s by Fery Manteghi since you need everything to be sterile before surgery to avoid complications.

The Fisher Space Pen became famous when they invented the retractable, pressurized pen, which was called the Anti-Gravity 7. It was designed to work flawlessly in zero gravity and was taken on the first manned Apollo mission in 1968 to the moon.

The pen is handcrafted and can write at any angle, upside down, over grease, in extreme temperatures, zero-gravity, and underwater. It is 3 times the size of a normal pen since it has many different functions. It is available in 16 colors.

Many pens are designed with more than one purpose in mind. As we discussed above, some pens are made with a ballpoint pen on one end and a stylus on the other. Some other pens can also double as a clock, compass, eraser, and more. Some pens are even made with a multi-color option, which is great for drawing and doodling. Check-safe pens are necessary to reduce check frauds. This ensures users peace of mind since the ink cannot be washed off. Many businessmen and tycoons use it all over the world to ensure that they don’t face any financial fraud during transactions. In a world full of righties, it can be really hard for left-handed people to find the right tools to write with. Writing with right-handed pens can smudge and smear the ink as you move from the left to the right. You need a left-handed pen with the right kind of ink to ensure that there are no smudges while writing. The outer layer for soft-grip pens is made of a soft material. This ensures that there are no dents or welts on the fingers from writing too much. This is perfect for people who have a long exam coming or generally write a lot on an almost daily basis. Soft-grip pens come in gel, ballpoint, fountain, felt-tip, and many other styles.

Pens are really important items that have become an essential part of our daily lives. Writing by hand has shown to have many benefits. It makes learning easier, which is why students are encouraged to indulge in note-taking. Writing by hand has also been shown to improve memory and enhances the creative expression of the individual. So, which type of pen is your favorite?