Skip to Content
Wearing hats has come back into style, and the most famous is the bowler hat. Worn by actors, musicians, businessmen, and women, bowler hats come in several variations, colors, and they sport cool decorations. The hats are worn world-wide and have an interesting history

We’ve all admired Charlie Chaplin, Bing Crosby, or the actors playing Sherlock Holmes for their wonderful outfits. The outfits are topped with bowler hats. The actors carry off the look with panache, and they make us want one of our own. Bowler hats, that is. So what are bowler hats?

What is a Bowler Hat?

The first bowler hats were of a specific hat shape made with fur felt. They were spun very tightly to ensure they’d be waterproof. They were robust hats with an impressive life span. Today’s bowler hats are made of rabbit fur or wool felt. The wool felt hats are not as robust and durable as the rabbit fur bowler hats.

Bowler hats are made with molds. Precut felt forms are sprayed with water and sit overnight. This makes them malleable. Next, they are steamed for a few seconds and then placed on the mold. The edges are trimmed away so the brim can be molded.

After the molding, the hat is removed and set aside to cool. The hat is then less malleable and more like the much more firm hat to which we’re accustomed. However, bowler hats are stiffer than their top hat cousins, so an extra layer of the stiffener is applied to the crown of the hat.

Seamstresses sew ribbon along the edge of the brim to give it that bowler hat look. They sew and fit into the crown of the hat the lining stamped with the manufacturer’s crest. The hat is finished with a leather band sewn onto the inside of the hat where it strikes the forehead. This prevents sweat from harming the material and makes the hat more comfortable to wear.

Now the hat is finished with a ribbon hot-blued around the crown of the hat. What looks like a bow tie is hot-glued to the seam of the ribbon to finish the hat. Lastly, all signs of hot glue and fuzz from the felt are removed from the hat, and someone has a lovely new bowler hat.

Are Bowler Hats In Style Today?

Yes. Businessmen still wear them in all the high finance arenas. Horsemen wear them because they fit tightly and won’t come off when riding at high speeds. Think polo players.

Women wear bowler hats as well. Dress them up with a veil of tulle, a flower, or feathers, and ladies have a dress hat for church or important functions. Ladies wear velvet, suede, straw, and vintage felt bowler hats that come in all colors, such as pink, purple, blue, red, orange, white, black, and any other color you care to name.

What Materials Are Used To Make Bowler Hats?

Organic straw, straw mixed with other textiles, natural fabrics, and synthetic textiles are all used to make bowler hats. Please note that when you’re considering a straw bowler hat, someone wove that straw by hand. The types of straw are varied and amazing:

For those men and women who want a hat, but aren’t sure what style suits them best, here is a list of alternative options for bowler hats:

Much like a bowler hat, but the crown is indented and the brim is flat instead of rolled up. Reminiscent of actors in gangster movies

Like the bowler hat to look at, this hat is made of straw with an indented crown. The brim is wider than a bowler and not curled up at all

Named for the container in which an English pork pie was served, the hat resembles a bowler hat. However, it has a flat instead of the rounded crown with a rib running along the top, outside of which is the rest of the crown. The brim is slightly rolled upward, but not at the pitch at which a bowler’s brim is turned

Resembling a bowler hat, this hat has an indented crown, too. The brim is only turned up in the back, with the sides and front only slightly upturned. Think Dr. Doolittle.

Also known as a ten-gallon hat or a Stetson, this hat has a tall pinched crown and a wide brim. The sombrero was the original cowboy hat

Reserved for formal occasions, the top hat closely resembles a bowler hat. The crown, however, is flat on top instead of rounded. The brim is about the same width as a bowler hat and is similarly turned up.

If something is good, then man will try to improve on it. Thus, bowler hats offer several variations:

This hat has a slightly taller crown, but the rest is a classic bowler 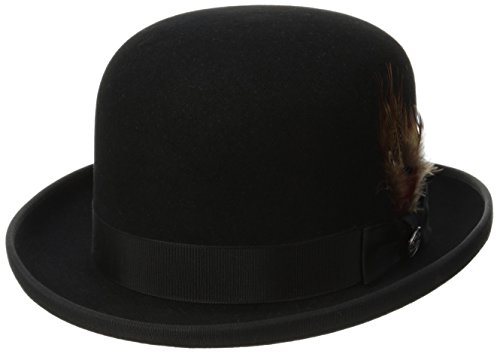 All the style of bowler hats, but with a cowboy accent

Made famous by the Little Tramp, this hat has no rolled brim but is an otherwise classic bowler

Worn mostly by women, this green bowler hat is just the thing to wear for St. Patrick’s Day

Seen largely in cartoons and modern art, this is a hat with an attitude

You can make your own bowler hat using your favorite textiles in your favorite colors. The pattern consists of three pieces: the crown, the brim, and the lining. Print off the pattern pieces, which are true to size and in PDF. Use them to cut out the pattern on tissue or pattern paper.

Note that the pattern will tell you to place it on the fold. Do not cut the fold. Markings will alert you to the grain of the fabric. You can print off the pattern, see the materials list, and get detailed instructions here.

How To Wear A Bowler Hat

The hat was designed to be worn pulled down on top of the head to keep it from being knocked off at high speeds on horseback or from low-hanging branches. The brim is to be worn straight across the brow and the back of the head. Of course, if you want a more rakish look, you can tilt the hat to one side of your head.

One of the pros of wearing hats at all is for protection. The sun was just as strong and harmful when bowler hats were invented as it is now. It makes good common sense to wear a hat when we’re outside. Another good reason to wear a bowler is that it won’t blow off the head very easily.

Hats provide protection for the eyes. The glare from the sun can cause accidents, but the brim of a hat cuts that problem in half if it doesn’t eliminate it. Another important pro of bowler hats is that they help regulate body temperature. The cold of winter won’t affect wearers so much, while the hat shades the head, face, and neck from the summer heat.

Cons of wearing bowler hats or any other hat surfaced in the mid-20th century. In the early years of the century, cars, public buses, and trains as transportation meant that a gentleman wearing hats with tall or even medium crowns found no space. If you drove or took the bus to work, then your hat got in the way. This led to the bareheaded way of life.

Also known as billycock hats, derby, coke (pronounced as cook,) and billy cock, the hat was invented in 1849 in England for Edward Coke, a politician, and soldier. Edward was the brother of the 2nd Earl of Leicester.

The bowler hat soon defined bankers and working-class men. St. James hatters the Bowler brothers, William and Thomas, of Lock and Company, formulated a hat for a customer who wanted something to fit snugly on top of the head. His gamekeepers had previously worn top hats in their work of preventing poacher attacks, but they fell off easily and got spoiled.

It was a toss-up who actually invented the hat, but nobleman Edward Coke soon came to be recognized as the customer as well as being the designer of the bowler hat.

About the same time across the pond, Americans called the bowler hat a derby. The Earl of Derby wore them to the horse races, so the hat became synonymous with the Earl. East coast residents who either moved west or toured it brought the hat with them. Cowboys soon saw the benefits of hats that didn’t blow off their heads. The bowler hat had conquered the Wild, Wild West.

The bowler hat made it into motion pictures with Charlie Chaplin, Malcolm McDowell, Laurel and Hardy, Paul Newman, and Rob James-Collier of Downton Abbey fame wearing it. The hat has grown followers around the world with Bolivia and Africa taking the lead.

Bowler Hat Prices And Where To Buy Them

Bowler hats are available at prices from eight dollars up to the hundreds, depending on the size and textile used. They can be found on Amazon, hat shops in your city, as well as online from specific hatters.