Skip to Content
Wear your suit and adjust your Tommy gun as we take a close look at the homburg hat, how and who wore them in history, how to wear them now, and where to get them.

For the men who wanted to look like true gentlemen in the 19th century, a Homburg hat was considered to be a staple piece in their wardrobe. Leaving the house without one just wasn’t an option, especially for prominent men, like diplomats and politicians.  If you’ve ever wondered what made this hat so popular, then today’s article is for you.

If you’ve ever been to Germany, the word ‘homburg’ may ring a bell. If not, you’re probably wondering what a homburg hat has to do with Germany. It has a lot to do with it, in fact, because that’s where this hat originated. Read on to find out some interesting facts about the homburg hat and whether it’s still popular today!

What is a homburg hat?

A homburg hat is a formal men’s dress hat, usually made out of felt or wool. The hat is characterized by a tall crown, with a single dent running down the center. This indented crown is also called a “gutter crown. The hat brim has an upturned “kettle curl” and is bound at the edge. The hats Homburg hats are usually available in darker colors like black or grey and have a decorative dark hatband that may sometimes be accented with a feather.

Once popular as the Homburg hat from Germany, this hat adopted a new nickname after Al Pacino wore it in a scene from the movie “The Godfather”. Today, the Homburg hat is widely known as the Godfather hat, with the movie bringing it back into the fashion scene in the 20th century.

Is a homburg hat still in style today?

The Homburg hat went out of style in the 20th century, due to changes in men’s fashion, especially daywear. Men’s daywear turned more casual and accessories like hats, especially dressy hats like the Homburg, became less popular. Although we don’t see politicians or diplomats wearing Homburg hats anymore, this hat is still popular amongst some music performers.

Black homburgs are still worn by some men in Jewish Orthodox communities, but this is becoming rare as well.  The Homburg hat may make an appearance in some period dramas set in the 18th and 19th centuries, but I doubt you will see it on the streets as often today.

There are a select few hat-lovers who still appreciate the Homburg hat but in a much more casual setting and semi-formal style. This is explained in one of the following sections of this article.

Homburg hats are typically made out of wool felt. The hatband ribbon is usually made from grosgrain fabric, like silk.  Sometimes a feather is added as an accent to the hat.

There aren’t variations in the shape of the Homburg hat. All of them have the same classic “gutter crown” and curled-up brims. However, there are different colors available. Whilst they were most popular in black or dark blue during the 19th century, today they can be bought in a variety of colors like grey, brown, black, blue and white. 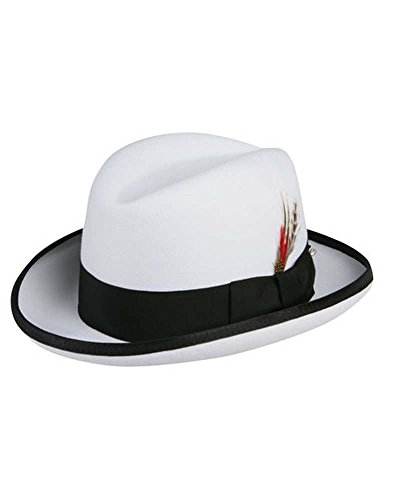 How to wear a homburg hat

Homburg hats are one of the most formal types of men’s hats. So, if you’re going for the formal style, they look best when worn with a tuxedo or full business suit and tie. Black or blue homburgs should be paired with a dark tuxedo or business suit, but can also look classy when worn with a formal brown, tan, or olive overcoat and smart shoes during winter months.

Do you want to get more frequent use out of your Homburg hat without donning a suit or tuxedo? You can! There are ways to dress a homburg hat down to fit today’s very casual style. Here are a few tips: 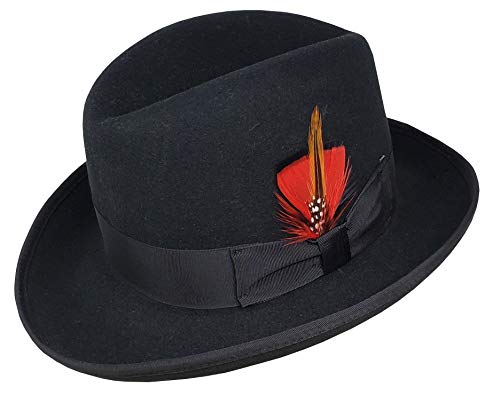 History and origin of a homburg hat

The Homburg hat derived its unique name from a town in Hesse, Germany called ‘Bad Homburg’.  It became a fashion sensation in the 19th century when King Edward VII returned from Bad Homburg to London wearing a felt hat with a center dent creased crown and turned up brim.

The men copied this iconic hat style and it quickly became popular as a dress hat among politicians and dignitaries, especially during the 1950s. Winston Churchill, the British Prime Minister, was known to wear Homburg hats and we cannot even dare to think of Homburg hats without mentioning him!

In 1953, American president Dwight D. Eisenhower switched out a black top hat for a Homburg hat at his inauguration as 34th president of the United States of America. He also wore it to several other occasions after this.

The Homburg hat was also worn frequently by Earl and politician Anthony Eden, giving the hat another nickname as the “Eden hat”.

The Homburg hat’s popularity drastically declined in the late 19th century. It only made a quick comeback in 1973 when the movie “The Godfather” was released with Al Pacino wearing it. In the early 20th century, some royals like Queen Margrethe, Queen Elizabeth, and the Countess of Essex were seen wearing a variation of the Homburg hat as part of their formalwear.

Despite that, the Homburg hat wasn’t here to stay, not even amongst royals, and has mostly been replaced by the Fedora hat.

How much does a homburg hat cost

It’s easy to get a hold of a Homburg hat with all the online shops available today. Shop to your heart’s content on the following online stores:

Wise Geek: What is a Homburg?