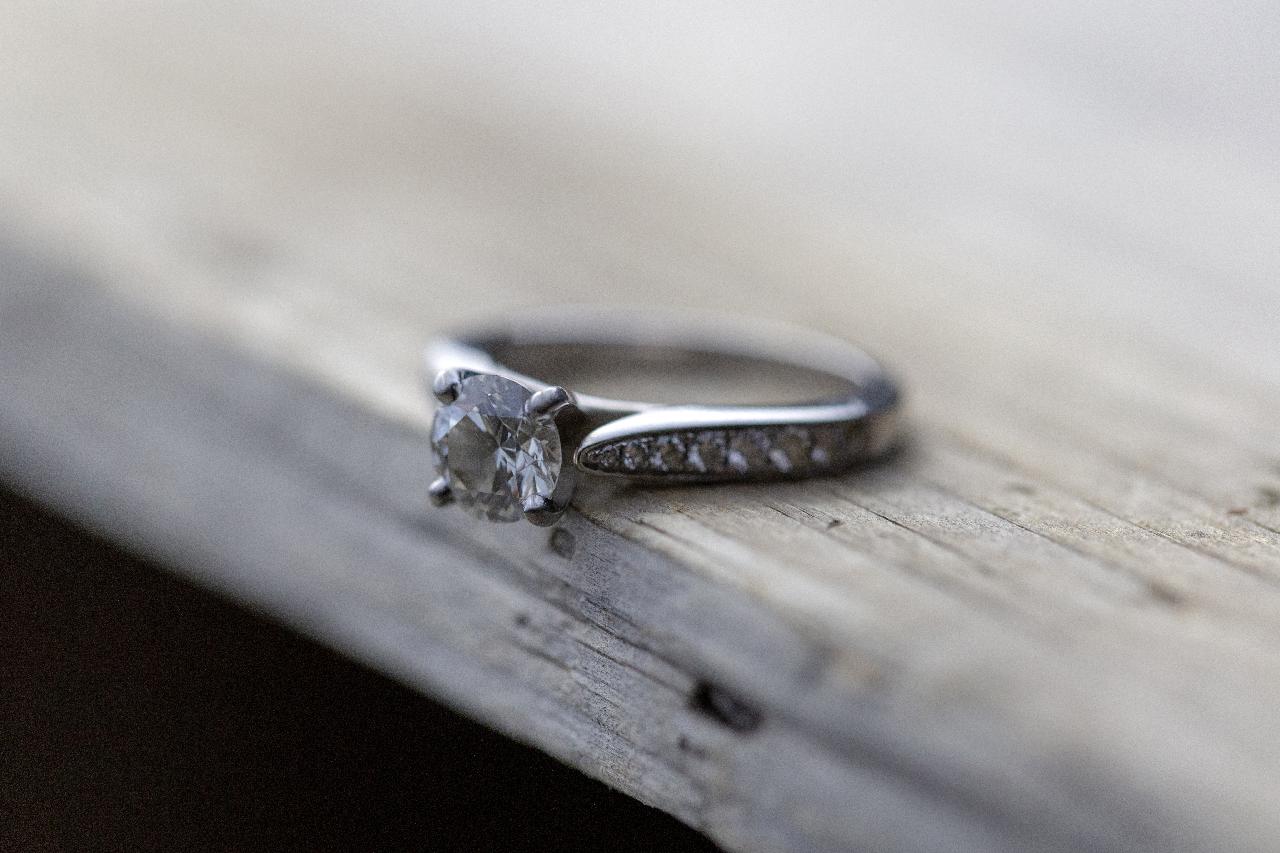 All diamonds are essentially rocks. They were formed over time (and we’re talking millions of years here). And n their raw form…well, they look like rocks. It takes a jeweler to take that raw diamond and turn it into a beautiful stone that sparkles and glitters and gleams. Today, the cut is considered to be one of the four Cs of diamonds. It’s an essential part of how any piece of diamond jewelry looks. Use diamond cut charts to know what type of cuts you like, what type of diamond cuts you may already own and how to recognize the most popular cuts in use.

Ancient people, like Romans, didn’t have the tools to cut diamonds. They wore their diamonds in the raw and polished them to bring out more of the natural brilliance. The first time a rough diamond was cut to give it a specific shape and appearance was probably in 1477. The Archduke Maximilian of Austria proposed to Mary of Burgundy with an elaborate diamond engagement ring that was made with diamonds cut into the shape of an “M.” Now, diamond engagement rings are a standard. 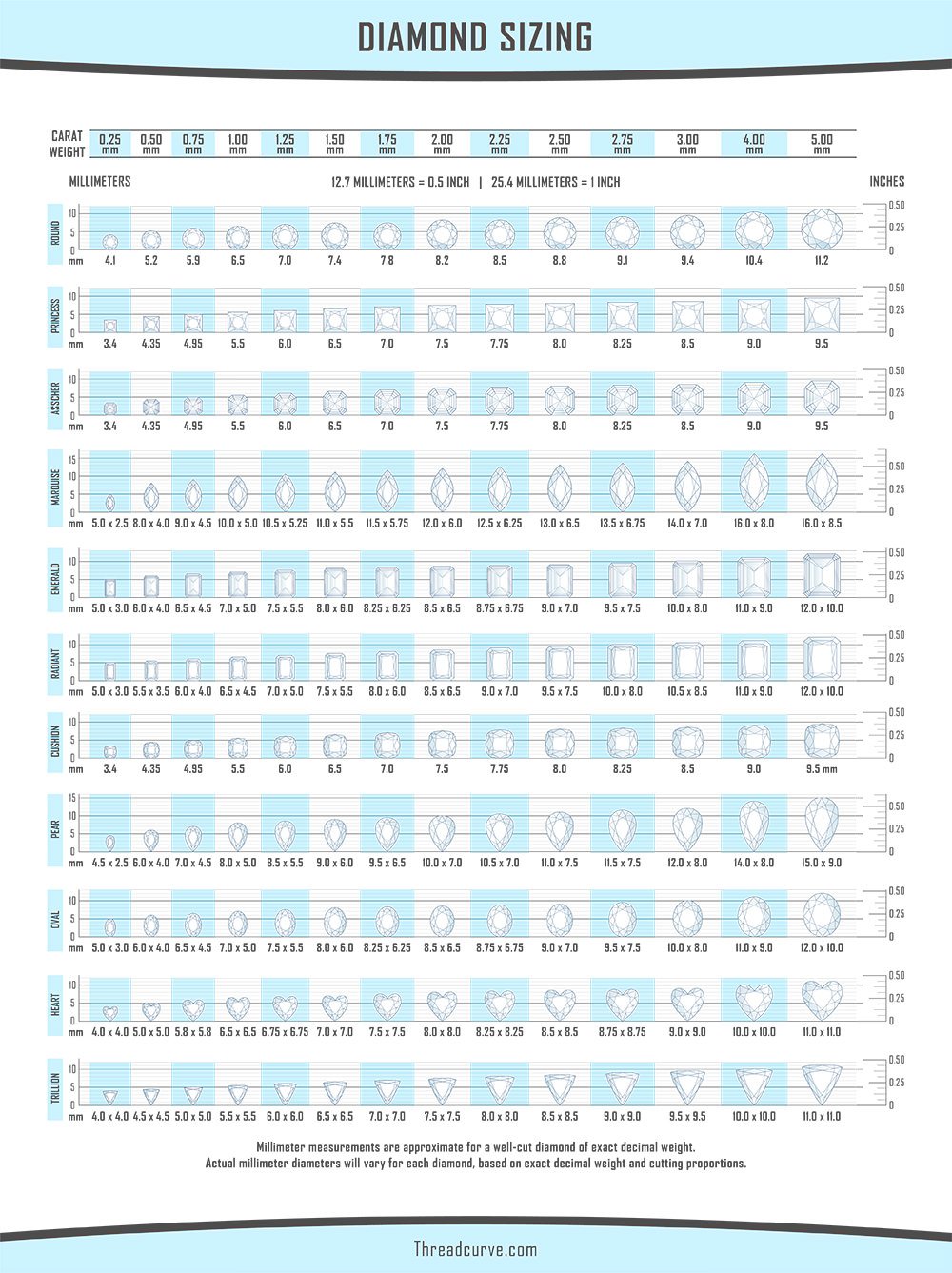 This changed the diamond game. In the 15h century, many different diamond cuts were used to bring out the shine and brilliance of diamonds. The table cut is perhaps the very oldest diamond cut to be put into use. Other older style cuts include the single cut, the rose cut or rosette cut and the French cut.

Diamond cutting today has become much more sophisticated as technology and tools have become much more advanced. Now, everything about diamonds matters. They are judged on diamond clarity, diamond shape, diamond carat weight, diamond color grade and of course, diamond cut, among other factors. Diamond grading is a big deal and cut grade plays a big part on these ratings. Can you spot today’s most popular diamond cuts on our diamond chart?

The history of modern diamond cuts actually begins with the first diamond cut on most charts: the Asscher cut diamond. It was created by Joseph Asscher, the co-founder of Royal Asscher, a diamond-cutting house, n 1902. It was considered a proprietary cut, meaning it wasn’t trademarked or patented. The cut was so distinctive, it was well-known and highly recognizable just the same. 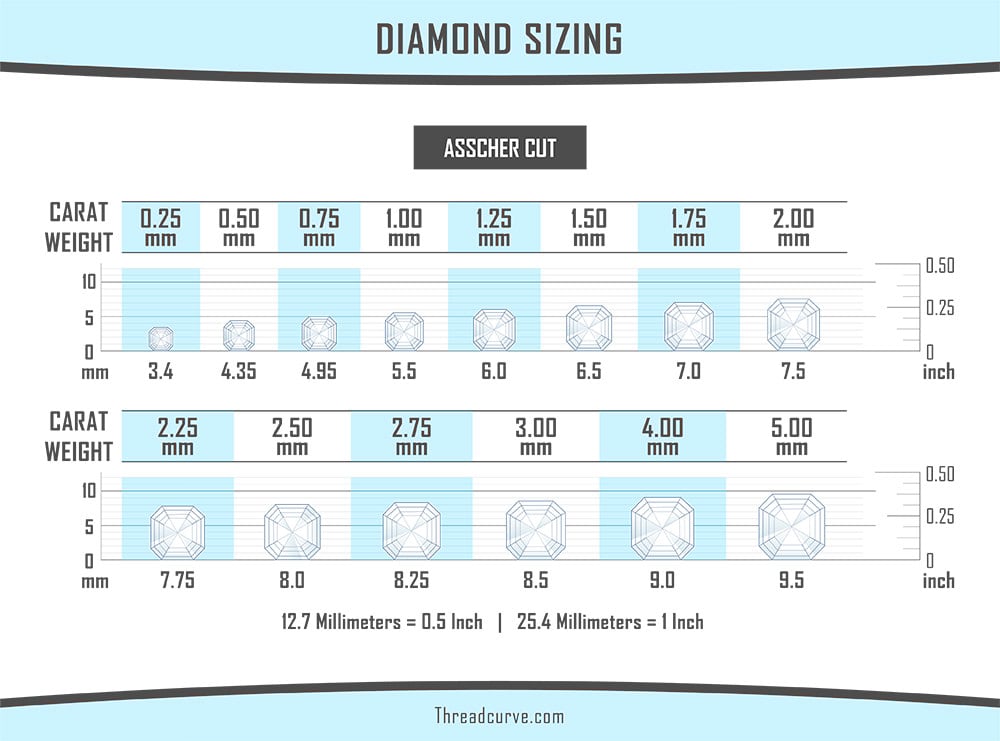 The Asscher cut is distinct for its octagonal shape. The diamond is cut in a pattern of several triangles that met n the center. This is what creates the distinctive eight-sided gemstone shape. This cut has a X-shaped cross-section in the center that immediately makes it stand out.

Diamond cutting is actually much older than modern diamond patents and proprietary cuts. People have been adorning themselves in diamonds since ancient days. The cushion cut diamond is actually a modern twist on the Old Mine cut, which dates to at least the 1700s. This cut was used in Brazil, where much of the world’s diamond mining occurred at the time. The famed Hope diamond has an Old Mine cut. This was a very popular cut that was in use for a long time. The cushion cut is like an upgraded version of it. In other words, it’s like the reboot. 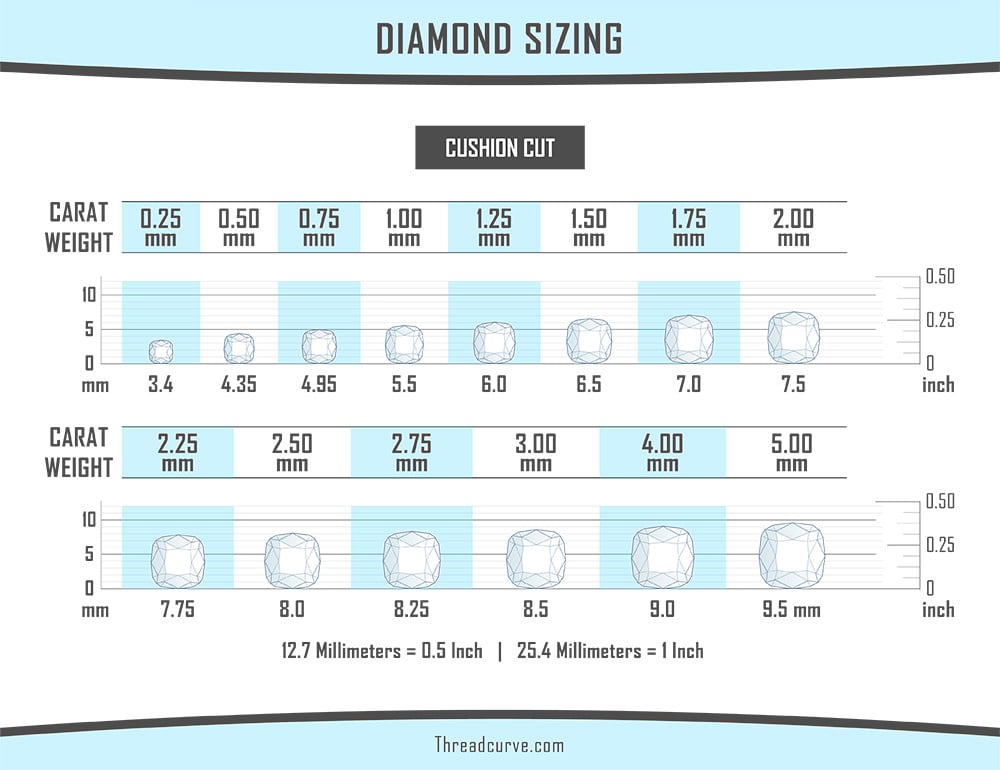 The Old Mine cut was made with 58 facets, while its modern cousin the cushion cut has 64 facets. It has a somewhat square shape with curved sides and somewhat rounded corners. This is one of the more recognizable and well known types of diamond cuts.

The modern emerald cut diamond is actually the next evolution of the far older table cut, which was one of the earliest diamond cuts ever used. The table cut was named because the gem was cut with a flat top, somewhat like the surface of a table. This flat surface gives emerald cut diamonds a brilliant shine that catches and reflect light very well. 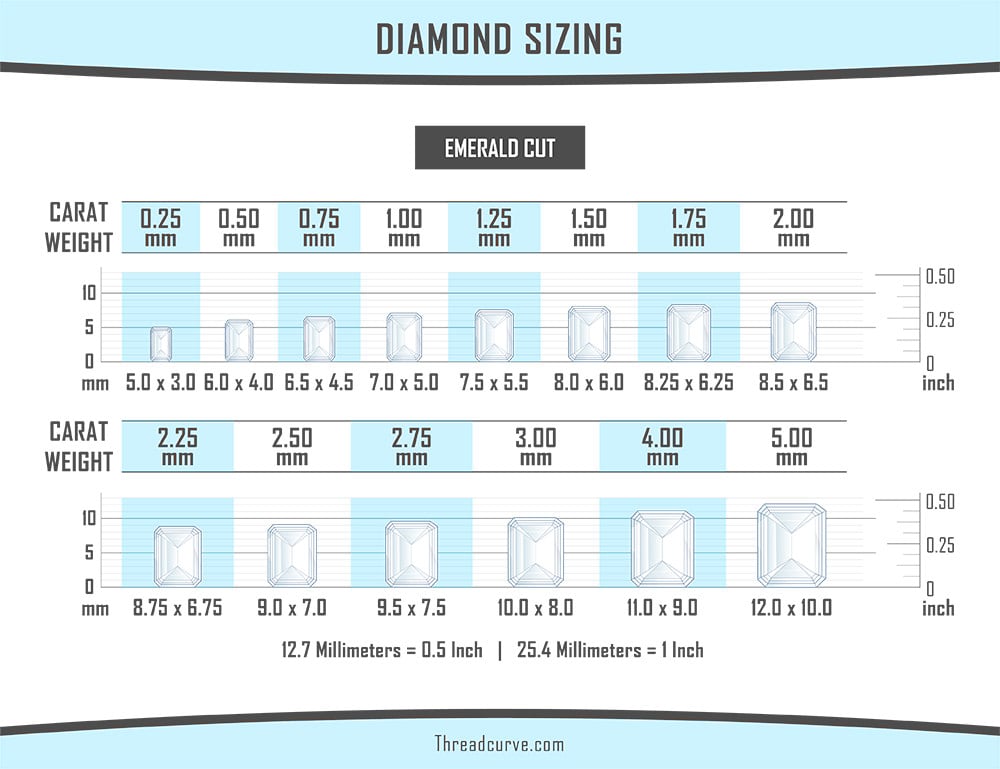 This cut was particularly popular n the 1920s and 1930s but lately, emerald cut diamonds are regaining popularity again. This cut is now considered to be a classic and it has a somewhat vintage look. Many celebrities and fashionistas are wearing emerald cut diamonds and gems in modern times.

The heart cut diamond is, of course, cut into the shape of a heart. It has 56 to 58 facets and it’s made with French tips. These are pointed ends that create more shine. The heart cut is really a modified type of the popular brilliant cut diamond and has a very high cut quality. 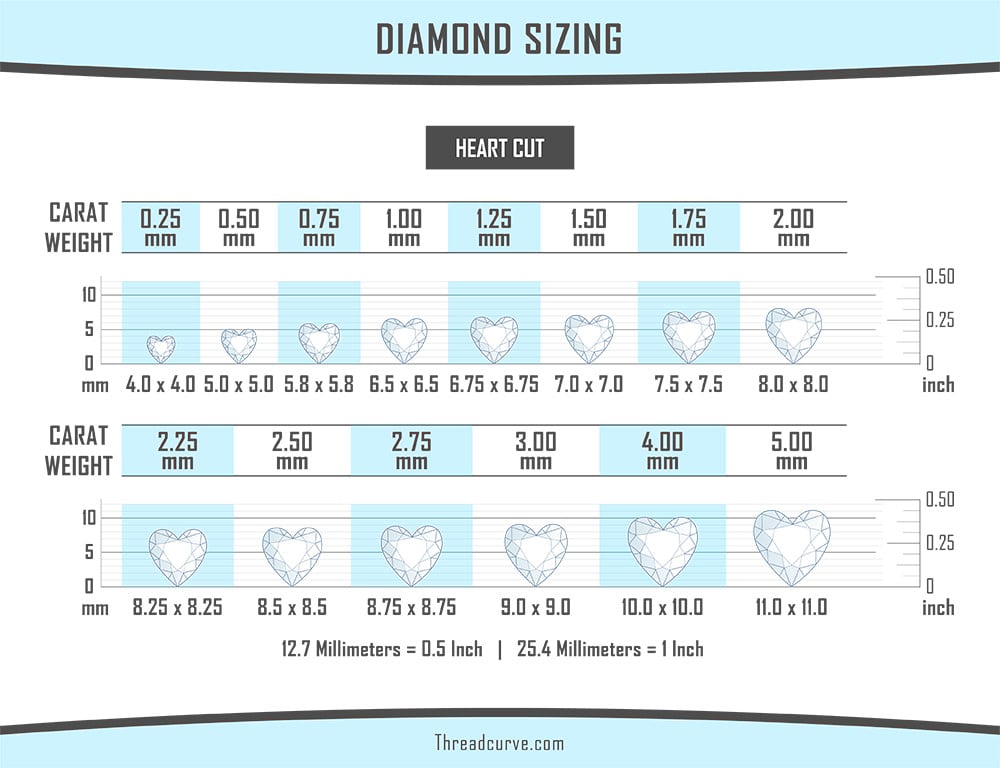 Because of its distinct shape and complexity, the heart cut diamond must be 0.5 carats or larger or it will be hard to make out the features of this cut. Only very skilled diamond cutters can create this shape. Even so, it takes a larger diamond size to create this fancy cut. it’s an eye-catching diamond cut that draws notice and it has a sweet, whimsical flair that’s hard not to love.

The elongated shape of the marquise cut diamond makes fingers appear longer and slimmer. This long, oblong cut gives marquise diamonds a big surface area, with 58 facets in total. There are 33 facets on the crown and 25 on the pavilion. This diamond cut is pointed at both ends. This cutting technique makes diamonds appear larger than they are. 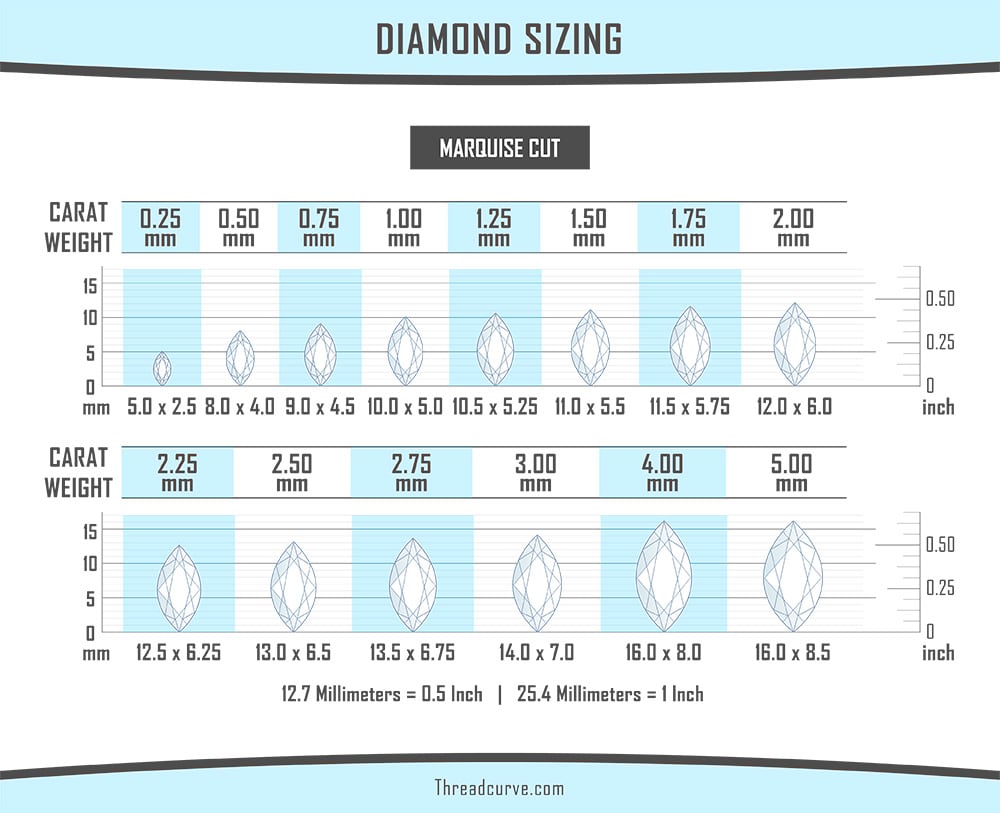 Legend holds that Louis XV of France was the first to name this cut the marquise. He ordered his jewelers to create the cut to resemble the mouth of his mistress, the infamous Marquise of Pompadour. He wanted the diamond to match the shape of her lips, which he said were perfect. While that’s subjective, many may agree that this is the perfect diamond cut.

The oval cut dates to the 1960s, when it was created by Russian diamond cutter Lazare Kaplan. It is extremely shiny and has 58 facets on the crown, which has a somewhat elongated shape with a long crown angle. Though the modern oval cut diamond shape dates only to the 1960s, diamonds cut into an oval shape date back through the ages and may even be ancient. The legendary Koh-i-Noor diamond was cut into an oval shape and set into the eye of Hindu goddess statue. This diamond was already old when it was stolen from its home in 1310. Cutting rough diamonds into basic shapes is a very old technique and the oval shape is one of the most popular cuts in history. 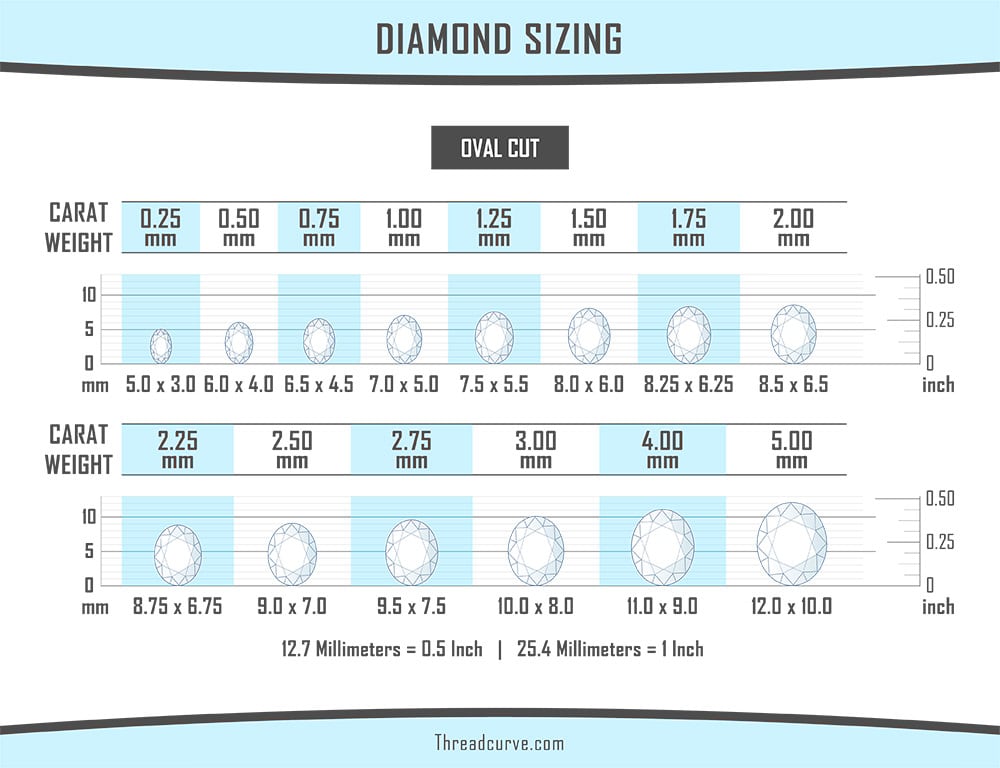 The pear cut is one of the older diamond cuts on this list and one of the oldest diamond cuts still in use to this day. It was first created in 1458 by Lodewyk van Bercken, a Flemish diamond polisher. He used his polishing wheel to cut beautiful facets into diamonds and created more complex cuts than had ever been seen before. The pear cut caught on and has since found its way around the world as a well known diamond cut that has also proven to have longevity enough to maintain its popularity through the centuries. 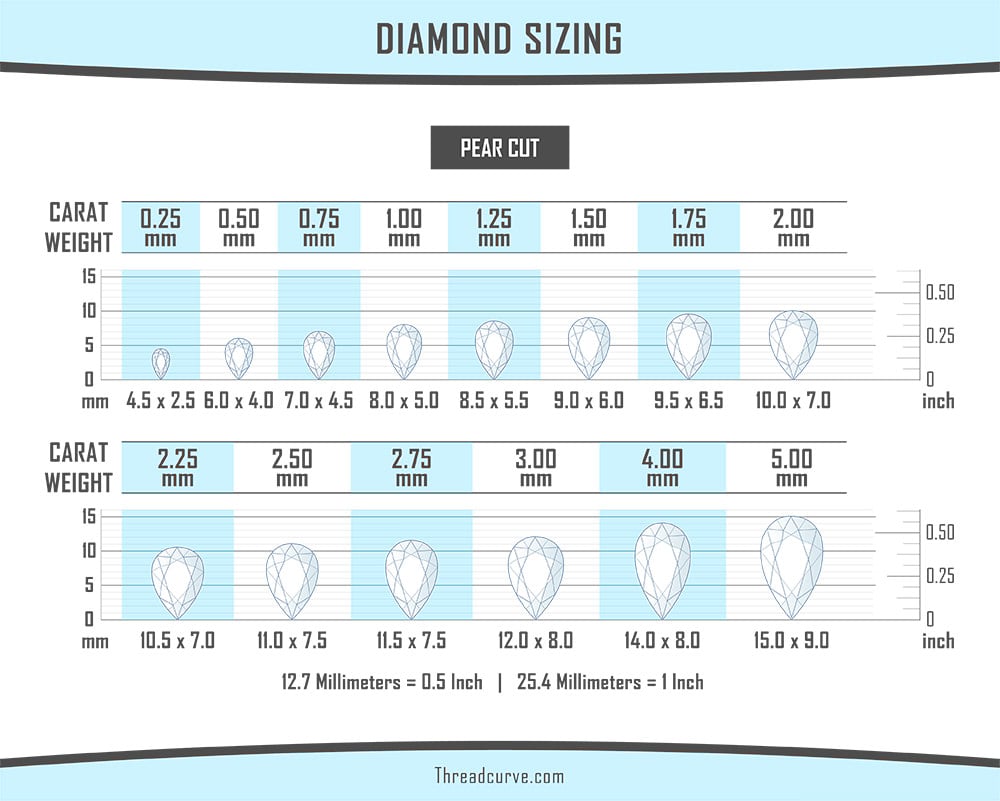 The princess cut diamond is square or rectangular in shape and dates to around 1980, though the exact origins of this cut are disputed. Some say it was first invented in an LA jewelry store, though it’s debated among jewelry historians and enthusiasts. The unique facet pattern of this diamond cut creates an almost criss-cross design in the middle that gives this diamond something of a flower bloom or sunburst facet pattern that’s highly recognizable. The princess cut is a very popular cut style that is seen frequently in diamond jewelry. 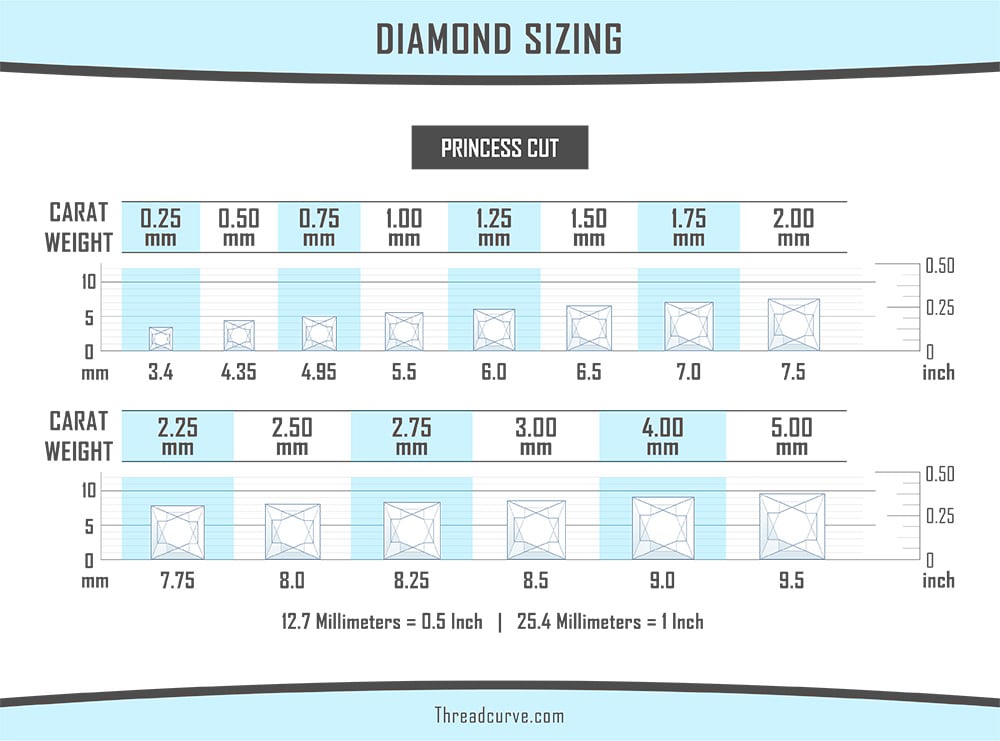 The super popular radiant cut was invented by New York diamond cutter Henry Grossbard in 1977. Emerald cut diamonds had fallen out of fashion at this time and Grossbard believed it was because they lacked sparkle. He wanted to create a square-shaped diamond that would have the shine and brilliance of more modern round cuts, which were much more popular at this time than the squarish emerald cut. He created the radiant cut diamond, a diamond with 66 facets on the crown and enough shine and sparkle to satisfy anyone. 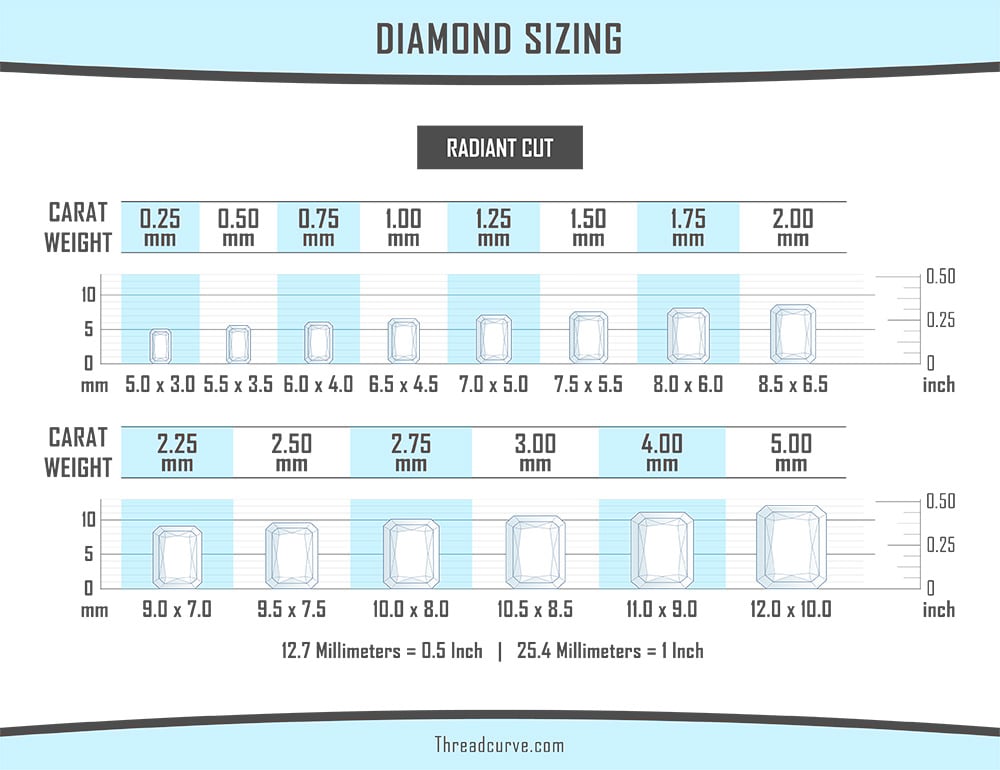 The name of this diamond truly says it all. This is a brilliantly shiny, sparkling stone with a square shape and all the gleam of a round cut diamond. Grossbard succeeded in creating a diamond cut that offered the best of both shape and brilliance with this design.

Round cut diamonds are, by far, the most popular diamond cut. In fact, about three-quarters of all diamond sales are round cut diamonds. This cut is popular because of the way it sparkles. A round cut diamond is brilliantly shiny, with 57 or 58 facets and, of course, a round shape overall that’s generally pleasant and pretty easy to match with other jewelry and accessory choices. 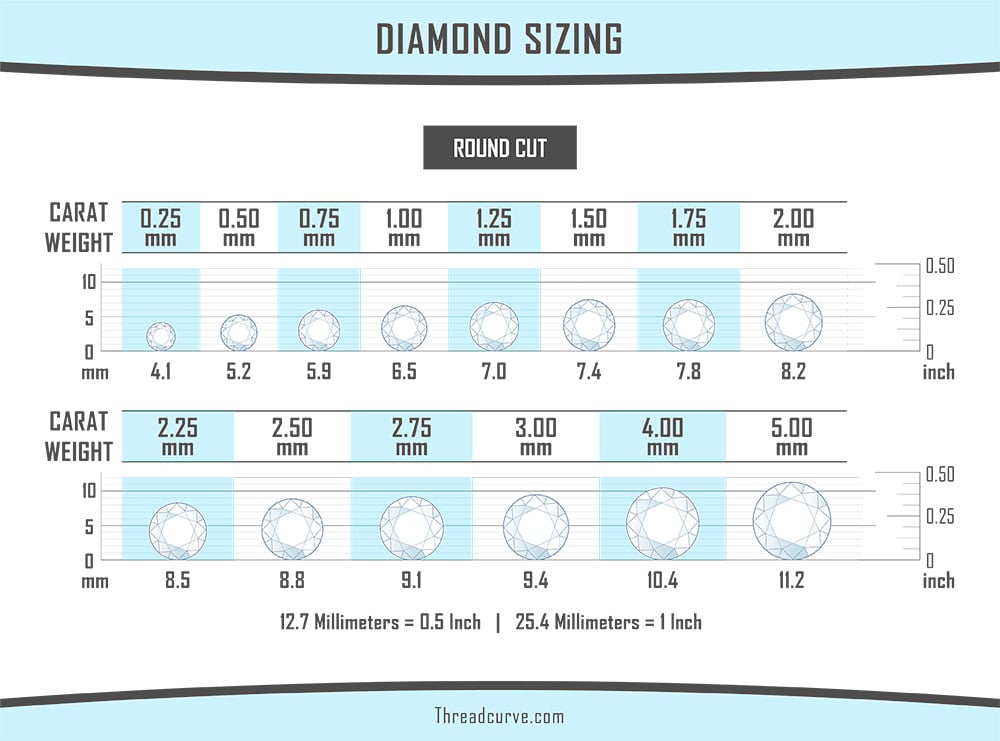 The round shape for diamonds became popular in 1919 when it was featured in a book about diamond design. In it, the author (Marcel Tolkowsky) stated that the ideal cut diamond was round. Ever since, this has been the most popular cut. The round cut is not necessarily a round diamond, which refers specifically to the diamond’s fancy shape and not to its cut.

The triangular shape of the trillion cut immediately stands out. This is a version of the brilliant cut that has 31 facets on the crown alone. It is made with pointed or rounded edges. And though trillion cut is seen most commonly in other types of gems, it is also used for diamonds. Its distinct shape makes this cut very recognizable and a little bit unique, particularly in diamond jewelry, which is why some may prefer this cut over more classic looks. 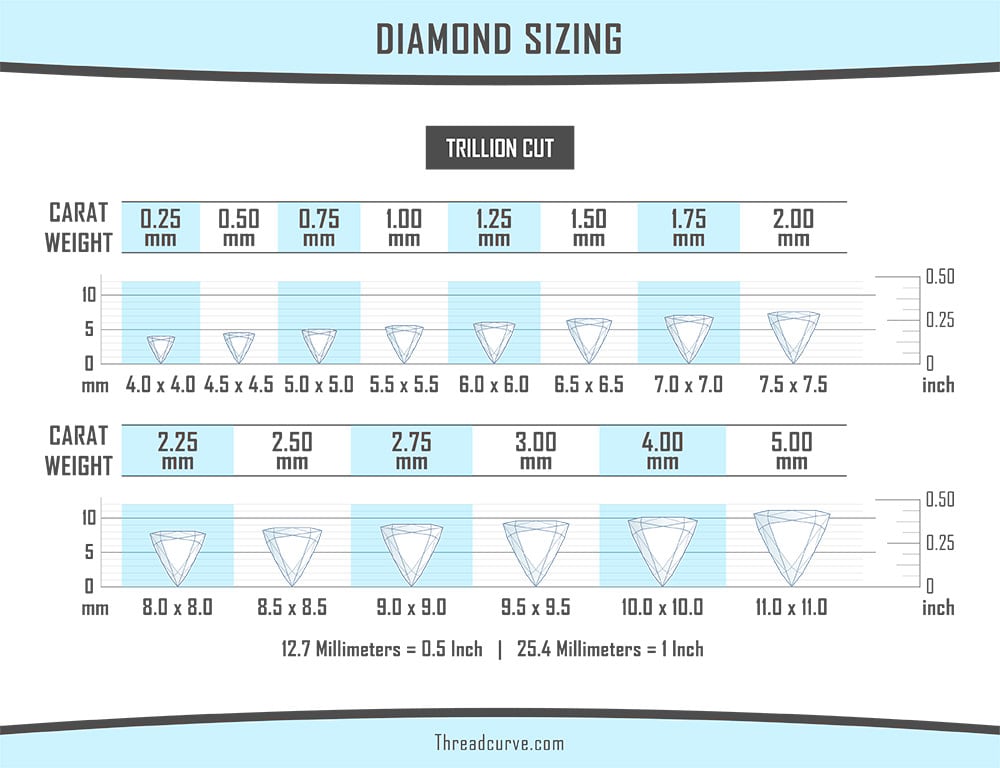 This is by no means a complete list of all the possible cuts. Some jewelry stores use their own proprietary cuts that you can’t get anywhere else and of course, there are many older cuts that are not used anymore because modern cuts provide so much more shine and sparkle.

New cuts will still be discovered in the future. And while some say that a certain cut is ideal, there are too many options out there to choose just one perfect diamond cut when they all shine so bright and all have such a great look in their own right. The best diamond cut is the one that you like. The one that sparkles the most for you is the right diamond for you to wear!