Skip to Content
Two budget sport-oriented smartwatches that are lightweight, competitively priced and focused on the sports junkie. But there are distinct pros and cons to each watch. Find out which is best here (after extensive testing). 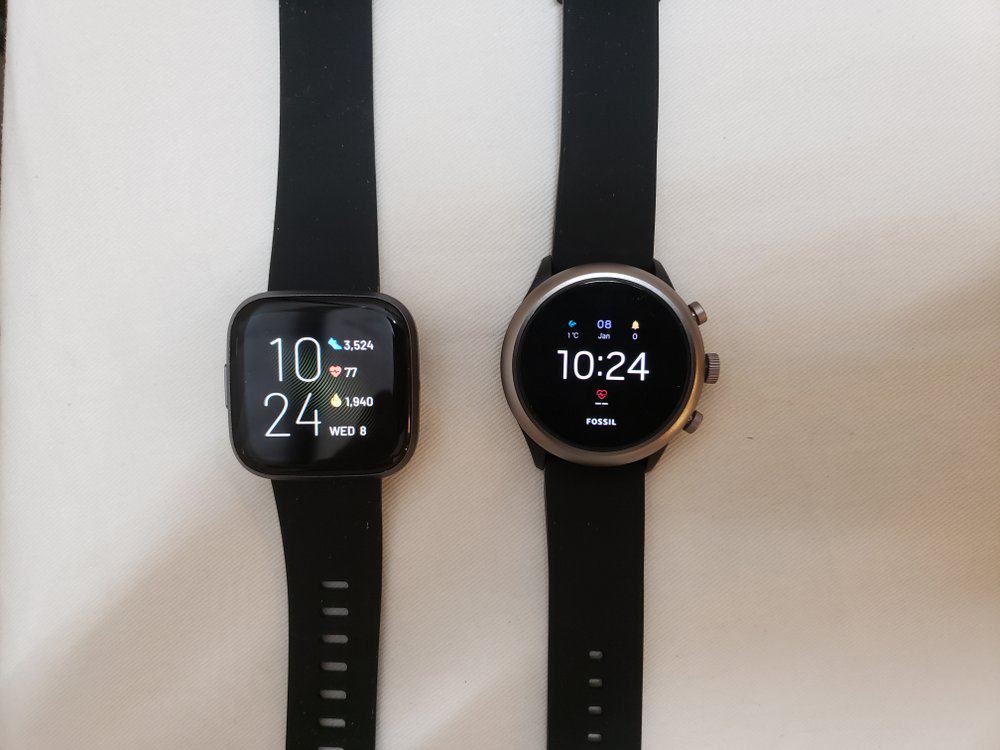 Fitness junkies will have to ponder their dilemma when faced with the choice between the Fitbit Versa 2 and the Fossil Sport Smartwatch. Each has its distinct strengths and weaknesses, but both are priced just below $200 and offer excellent value and features for their price. 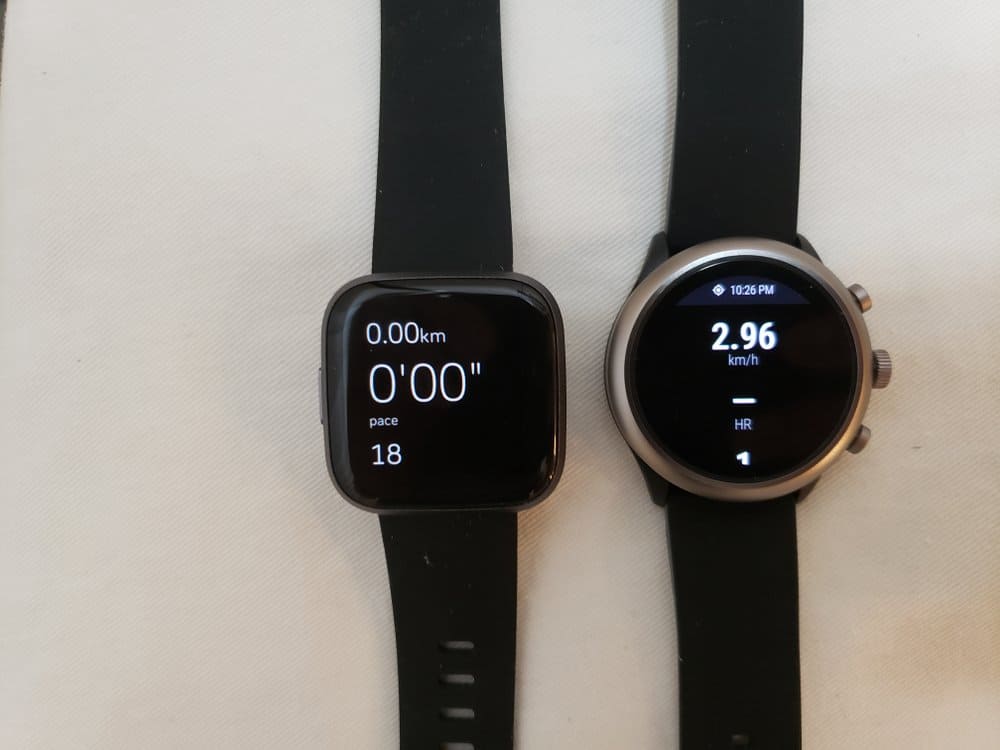 Both watches are petite in size and lightweight, meaning they are comfortable for all-day wear including overnight. Heart rate data is recorded without the need for a death-grip on your wrist.

Both watches are water resistant so if you’re into water sports, this could be useful to track the quality of your exercise. Fitbit promises that their watch is “swimproof in a lake, pool, or ocean (up to 50 metres)” while Fossil promises that watches with a heart rate sensor are waterproof, up to 30 metres. 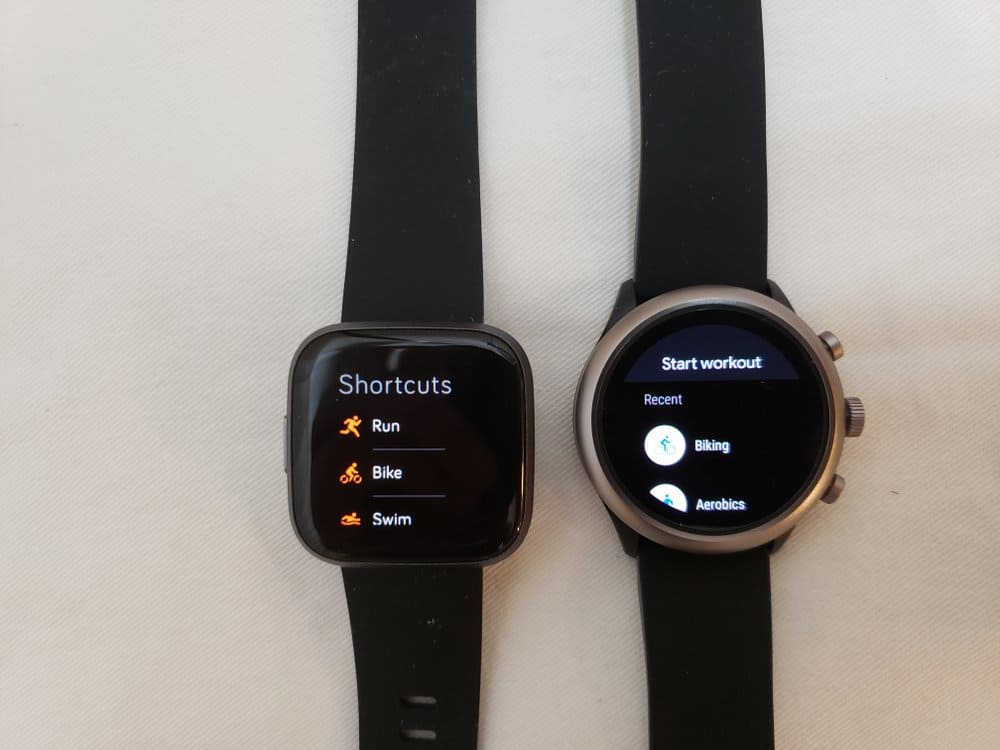 Google Fit has almost 50 sports activities you can choose from, while the Fitbit has 20. More is not necessarily better — Google Fit sometimes has really repetitive options for example, it has four biking activities — one for road, one for mountain, one for utility biking. Unnecessary.

Fitbit’s choice of 20 covers most of the ground you’ll need and most importantly has an option for swimming. On the Fossil, you’ll need to download a separate app to log your swimming activities, unfortunately.

Ever see folks running with a lumbering smartphone strapped around their arms? Want to avoid that? Then keep in mind that the Fitbit Versa 2 does not have an integrated GPS. You’ll be carrying the smartphone around if you want any location data. Furthermore, the syncing between my phone and the Fitbit can sometimes be unreliable, which means you might get no GPS data. The Sport has an integrated GPS, although by default it relies on the phone’s GPS. 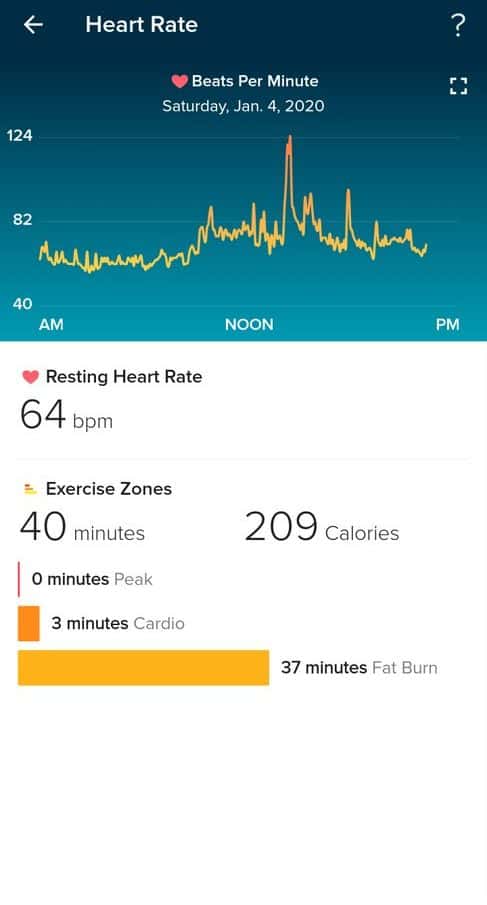 Fitbit’s app is superior in its design and the presentation of data. The colours that the app uses looks much more attractive. What I really like is that Fitbit also uses its data to score your sleep and fitness. Google Fit is good as it offers similar functionality, but does not offer a similar level of detail.

Both apps have their own means to encourage you to do more exercise. The Fossil Sport Smartwatch, through Google Fit, does this through its Move Minutes and Heart Points, while the Fitbit Versa 2 reminds you hourly to do more steps and also keeps tabs on how much you’ve exercised over the week. Google Fit’s innovation here is Heart Points, which measures how intense your activities are and gives you more points if your activity hits a specific level of intensity.

The user interface of the Fitbit is much more streamlined and easy to use. It has only one button which serves as a back button and also activates a quick shortcut when long pressed. Apps load quickly on the Fitbit with little pauses between tapping and response.

The Sport has two buttons and a crown that rotates and also acts as a button. The top and bottom-most button act as shortcuts which you can configure, and the crown acts like a scroll wheel. In addition, long pressing it also activates another shortcut — in my case, it activates Google Assistant.

The Sport can sometimes be very slow to respond. If you’re used to instantaneous feedback, you might be confused as to why the Sport is not responding when in fact it’s just busy executing your previous instructions. 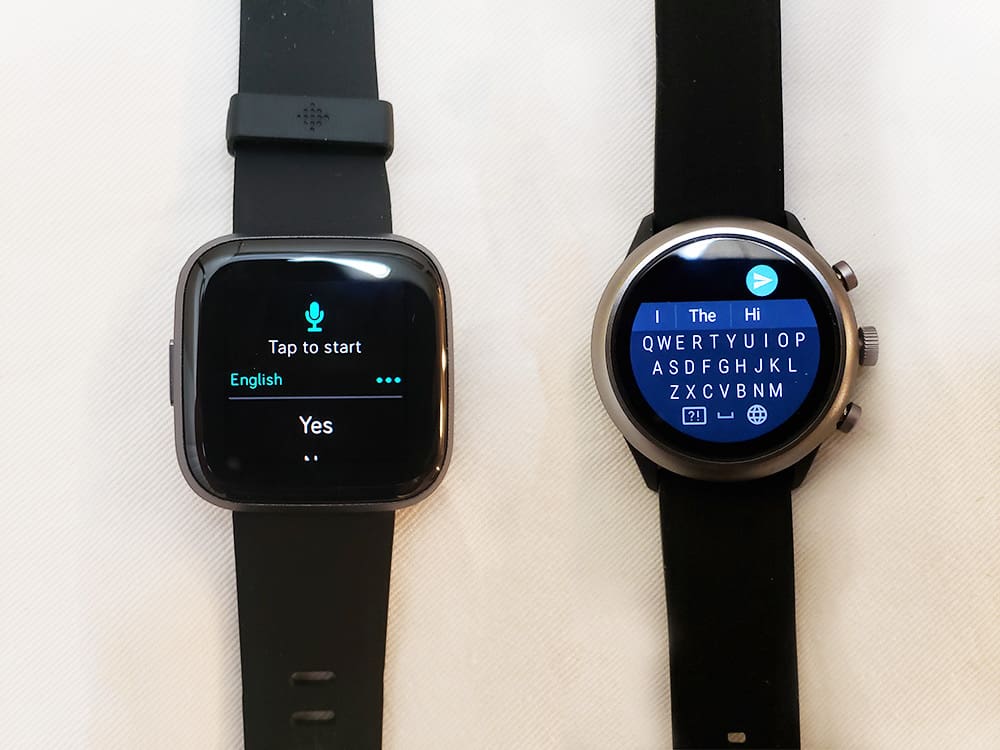 Let’s say you’ve received a text message and you want to reply. Which watch is better? I’d say the Fossil Sport Smartwatch. On the Sport, you have the choice of using a keyboard or Google’s speech-to-text system to reply to a message. On the Versa 2, you can only use Alexa’s speech-to-text system, which is a negative to me because sometimes you need to enter something atypical — a non-typical name, a scientific word, etc. — and the speech-to-text functionality will fall short.

Using the Versa 2, you’ll be reaching for your smartphone much more often. Whereas using the Sport will allow you to do more tasks on your wrist. 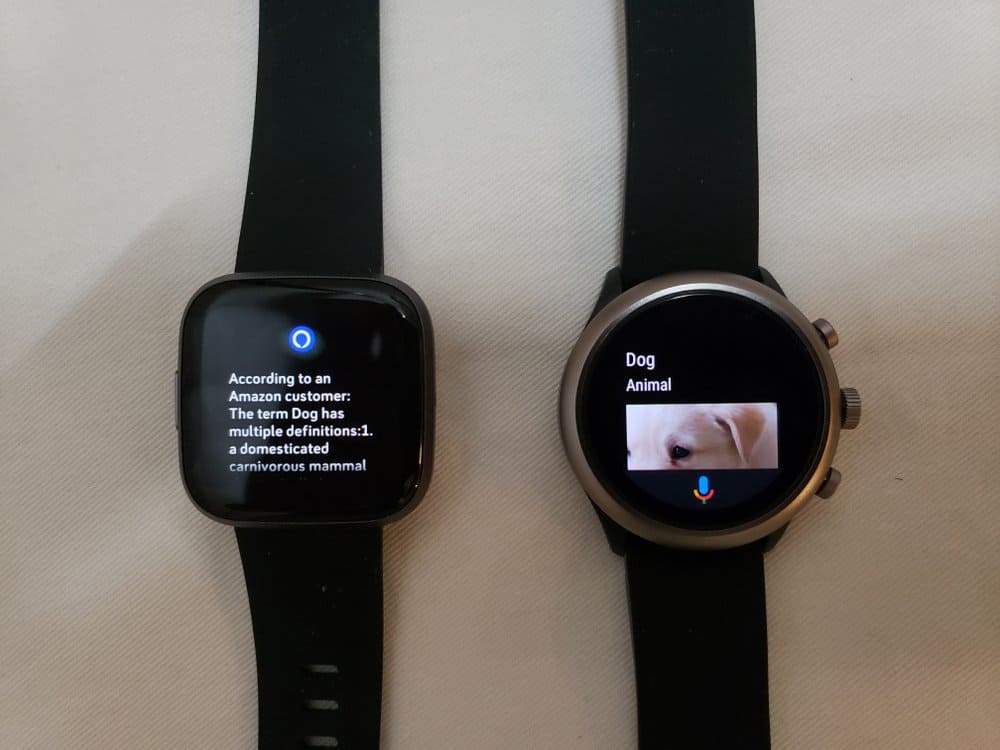 Google Assistant wins without a doubt. The quality of information that the Sport can provide is superior to what the Versa 2’s Alexa can. An example was when I asked both devices to “take me to the closest pharmacy.” Google Assistant told me the name of the closest pharmacy, showed me a map and had a “Start Navigation” button. On the other hand, Alexa would respond with an error saying it’s an “Unsupported Request”. If you asked Alexa where the closest pharmacy is, it’ll give you a list with names of the pharmacies, the distance from you, but no other information to help you find your way. 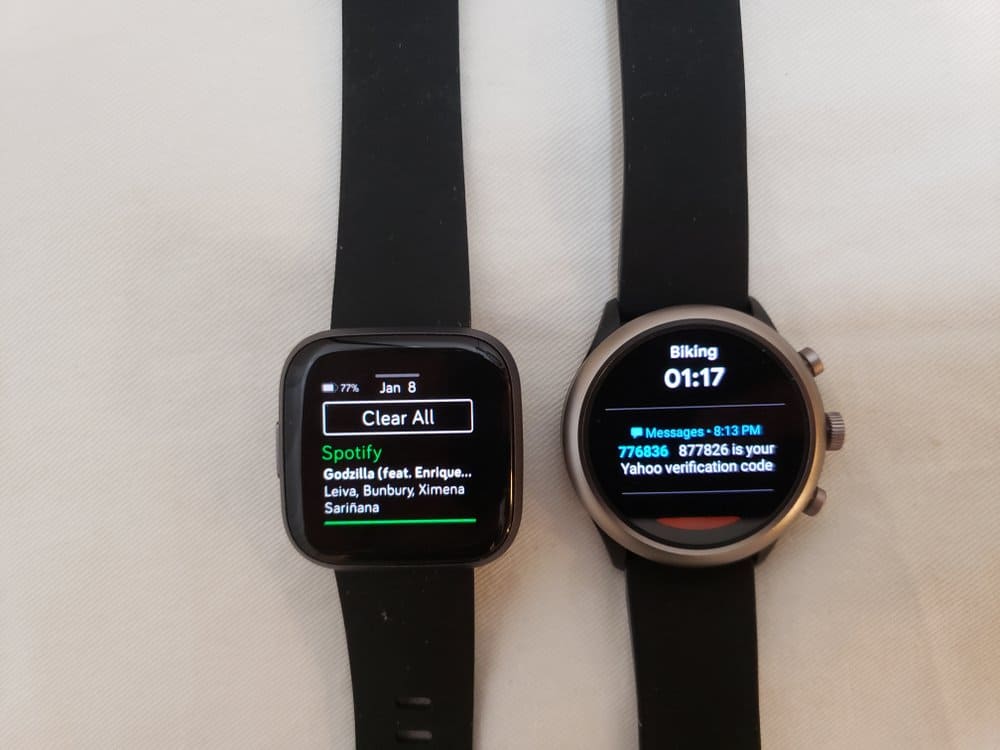 Compared to Apple’s or Samsung’s watches, and paired with watches of the same brand, the integration of these watches with smartphones feels less streamlined.

For example, the Fitbit relies heavily on the smartphone Fitbit app to act as the intermediary between your smartphone and the Versa 2. You’ll need to do almost everything through the Fitbit app such as add watch faces or login to Spotify. You also need a Spotify Premium subscription for it to work on the Versa 2.

Fossil’s Sport Smartwatch feels a bit more integrated in that it syncs up well with an Android smartphone, and it is fairly understandable given that the Sport runs on the Wear OS. This means that the Sport receives notifications more reliably (whereas on the Versa 2, you have to manually activate the notifications). And because it uses Wear OS, you can use Google apps such as Keep, Maps and Translate.

Both watches do not have a speaker. This means you won’t be able to take calls from your smartwatch or receive audio feedback during exercises.

The Versa 2 falls short of being “versatile.” It offers great analytics and motivation for people looking to use a smartwatch to get fitter and it is miles ahead of the Sport in this domain. It’s a master of one.

In this context, ironically, the Sport also falls short of what its name promises. It’s not a superior sport-focused smartwatch as compared to the Fitbit, but it offers up a much simpler integration between phone and watch than the Fitbit, more productivity apps and good fitness analytics. It’s a jack of all trades.

What should you get?

If you prefer a sport smartwatch get the Versa 2. If you want something more versatile, get the Sport.