Skip to Content
Fitbit's Versa 2 is a great watch for people looking for a smartwatch that is geared towards fitness. But its smartwatch capabilities is another story. 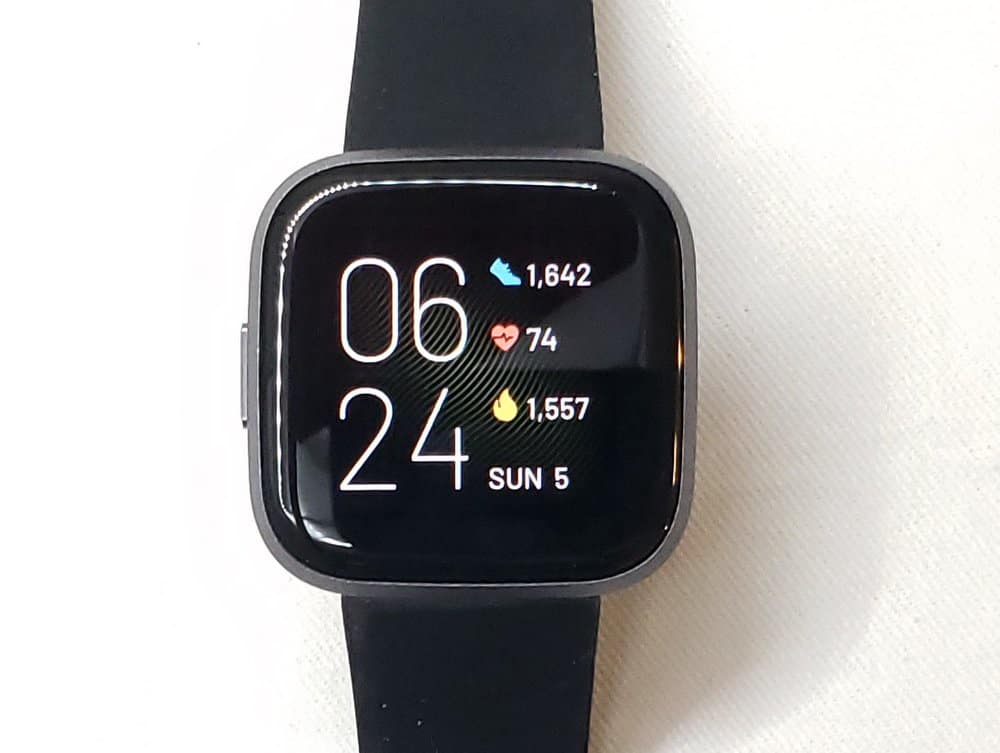 I was particularly excited to get my hands on the latest Fitbit smartwatch offering. 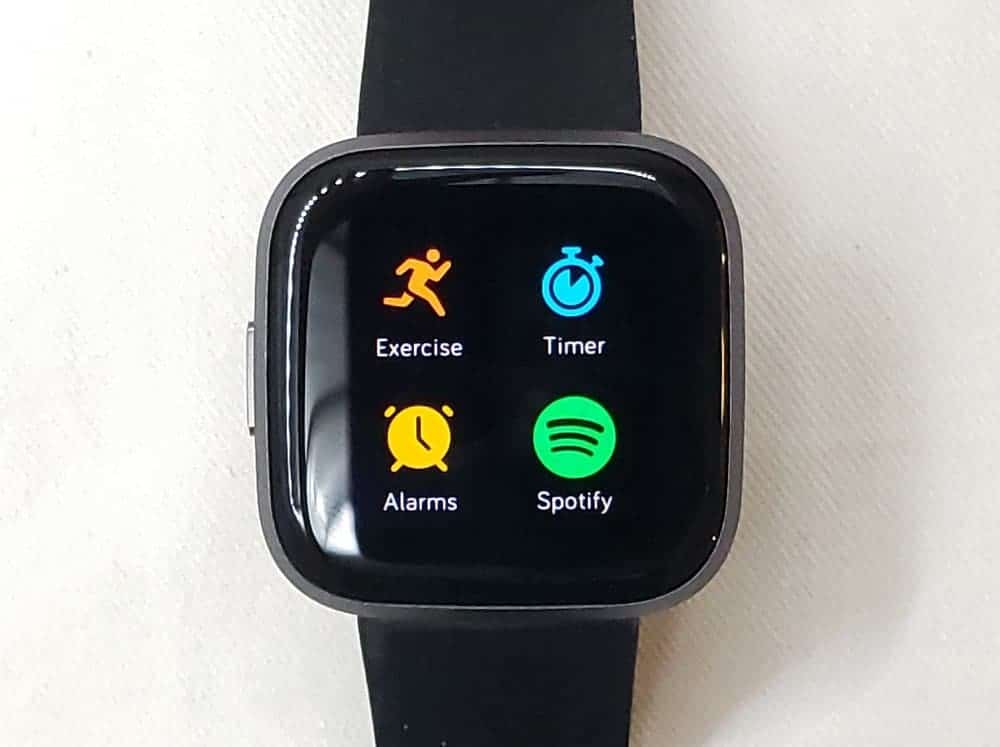 The Fitbit Versa 2 has a very promising name that it has to live up to. The “Fitbit” brand promises you that it will encourage you to live a healthier life. The “Versa” part is a bit less direct in what it means. Is it a versatile watch? It certainly puts the “tile” in “versatile” with its square display, but does it also function well as a smartwatch?

On the one hand, you cannot go wrong with Fitbit’s extensive pedigree of great fitness trackers. Yet on the other, if you are seeking a smartwatch, then you’d want to read on for further consideration. 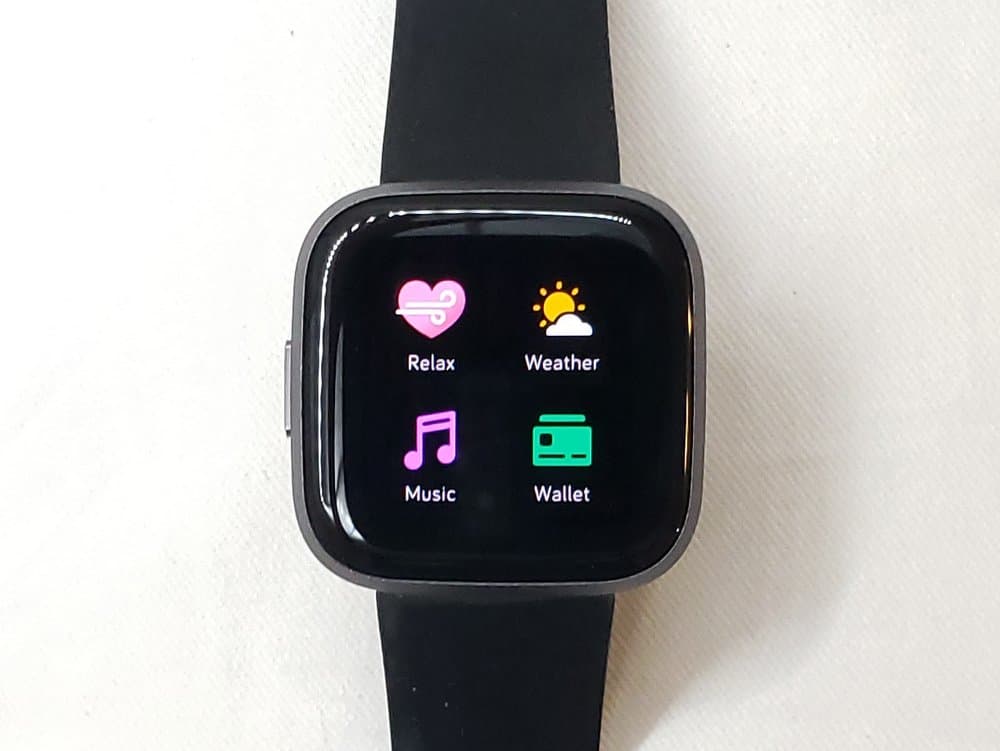 The Versa 2 takes some of the best features of its predecessor, the Versa, and improves upon them. It continues being one of the most dynamic fitness trackers out there with a screen that is bright enough for the sunniest of days and also comfortable for everyday wear. 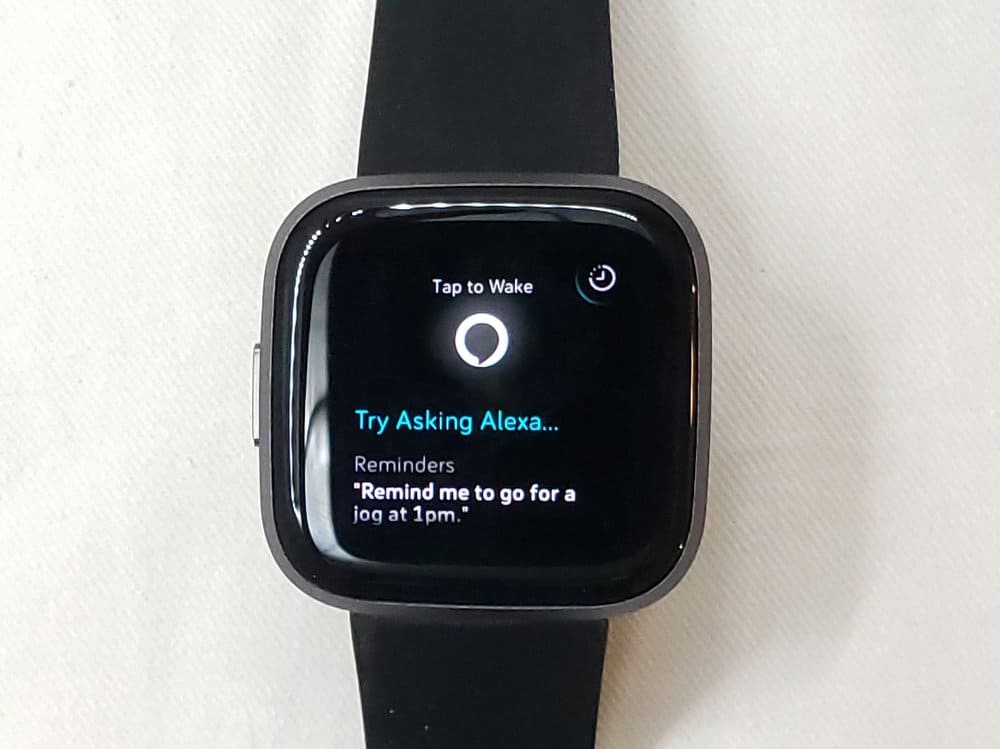 The simplicity of the watch is unparalleled — there’s only one button for all interactions now, as compared to the three-button setup in the previous Versa. Interacting with the sole button really feels like you’re using the one button on an iPhone — long-press it to do a special action which can be to active Alexa, just like you would activate Siri. Single press it and you will exit a menu.

The user interface is very sleek and modern with a thin sans serif font telling you the time, date, steps, calories burned, and current heart rate. The beautiful UI is complemented by a bright AMOLED screen displaying 300 pixels by 300 pixels on a 40mm screen. Compared to its predecessor which used a LED screen, colors are more vibrant and blacks are pitch black.

By default, the watch comes with various tools such as alarms, timers, Spotify controls, Strava, and a Wallet app to activate Fitbit Pay. Alexa manages all the voice-activated interaction with the Fitbit. You can tell it to set alarms, reminders, tell you the time, and other typical tasks that the Google Assistant or Apple’s Siri would be capable of. Do note that Alexa is not available in all countries. You can check its availability here: https://www.fitbit.com/en-ca/voice

Day to Day Use

As I got acquainted with the watch, I noticed that its notifications are a bit flawed. Paired to my Android phone, it seemed that I get few notifications that I would otherwise get on other smartwatches. No WhatsApp notifications, no Facebook Messenger notifications. The only texting notification that I receive are messages through the SMS app and it will not display MMSes.

Unstreamlined interface between phone and watch 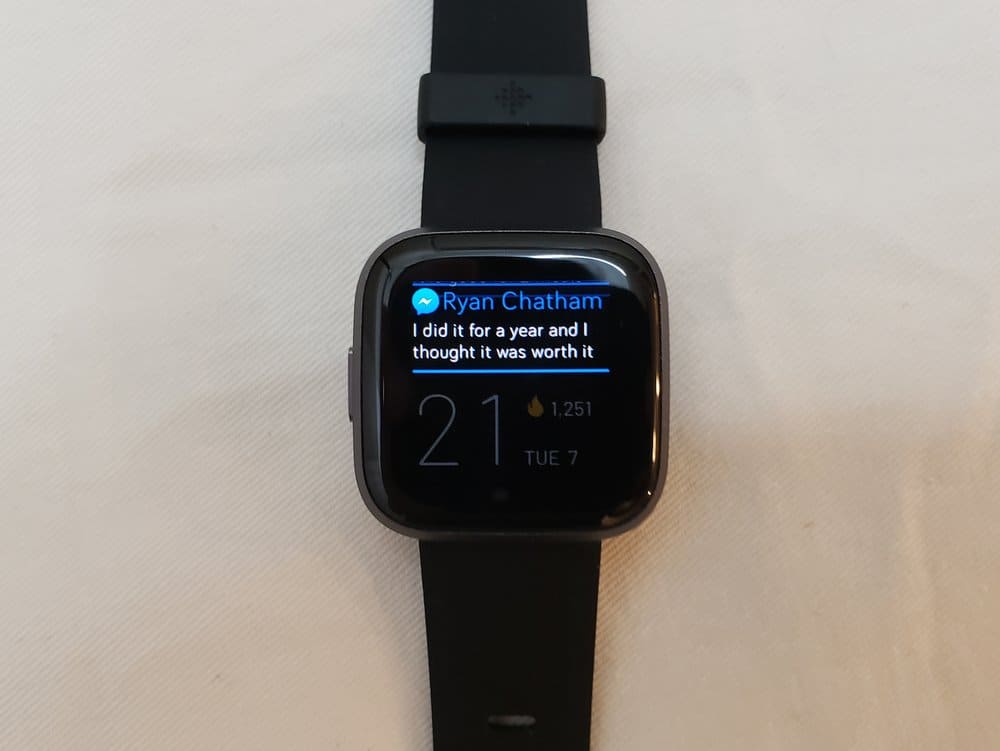 Upon more research, it seems you have to enable notifications through the Fitbit app on your smartphone.  Pretty inefficient, if you’d ask me. You can’t activate and configure many things through the watch. For example, you will have to configure your Spotify account through the Fitbit app. Worse — you will need to download a Fitbit desktop app in order to transfer music. It all seems very inelegant. For file transfers, I would expect to be able to do it wirelessly through Bluetooth or through a cable connected to a computer, where the watch is mounted as a storage space.

And because the Versa 2 lacks a speaker, it means that the smartwatch will receive calls but you’ll have to pick up your call on your phone, but such is typical on entry-level, lightweight smartwatches.

Since this Fitbit doesn’t come with a speaker, which can be a bit inconvenient when you can’t keep your eyes on the watch, such as when you gave Alexa some instructions and want to know what its response is. Or when you are exercising and want your lap times — a feature definitely available on Samsung’s line of smartwatches. 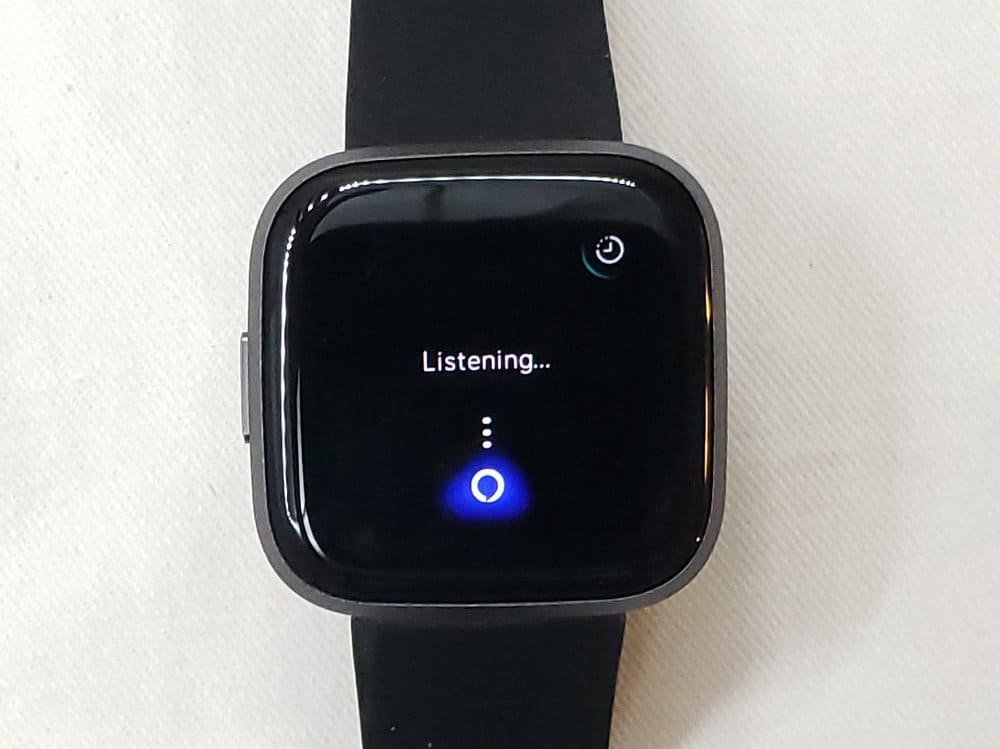 Using Alexa to reply to messages — something that you can only do on an Android — is hit and miss. You can only dictate what you want to say and Alexa will convert your speech into text. There’s no keyboard. This means that if your sentence is complex (i.e. has punctuation) you will run into some challenges. Alexa will guess as to where the punctuation goes, but I hope you’re good at one-liners. Otherwise, Alexa’s speech recognition is usually quite reliable and accurate.

Battery life is outright amazing, quite reminiscent of the good old days of dumbphones where you can go days without charging. A full day of wearing, including wearing it to sleep and using the always-on display, only got the battery down by 40% and that included some exercise and cold weather exposure. On the Samsung Gear S3 Frontier, you would be down at least half with the same amount of usage and on the Fossil Sport Smartwatch, it will be close to dead.

Fitbit promises six days of battery life, and I believe that if you used the smartwatch extremely conservatively, you might be able to achieve such length of battery longevity. I just prefer to charge the battery more often in order to have an always on display as I like being able to see the time without having to rotate my wrist.

Clamp charger is also a straitjacket

The charger is a unique one. There are no magnets here to align the watch onto the charging pins. Instead, it comes with a clamp which you squeeze, put the watch into the receptacle, and release.

This is probably the simplest charger I have seen so far but also the most difficult to get a watch in and out of. You can’t interact with the watch when it’s charging either, since you can’t access the button on the side of the watch. But in the greater scheme of things, this should be considered a minor and may be negligible shortcoming.

Since its latest software update, you can now have up to five watch faces loaded on the smartwatch. It was a bit incredible that you could only have one when Fitbit’s competition was on it for a very, very long time already.

Exercising with the Fitbit Versa 2 is a great experience because of how light the watch feels. Unlike exercising with a full-fledged smartwatch with its accompanying heft, the Versa 2 keeps its humble self discreet while recording your heart rate, speed, calorie count, and time elapsed. 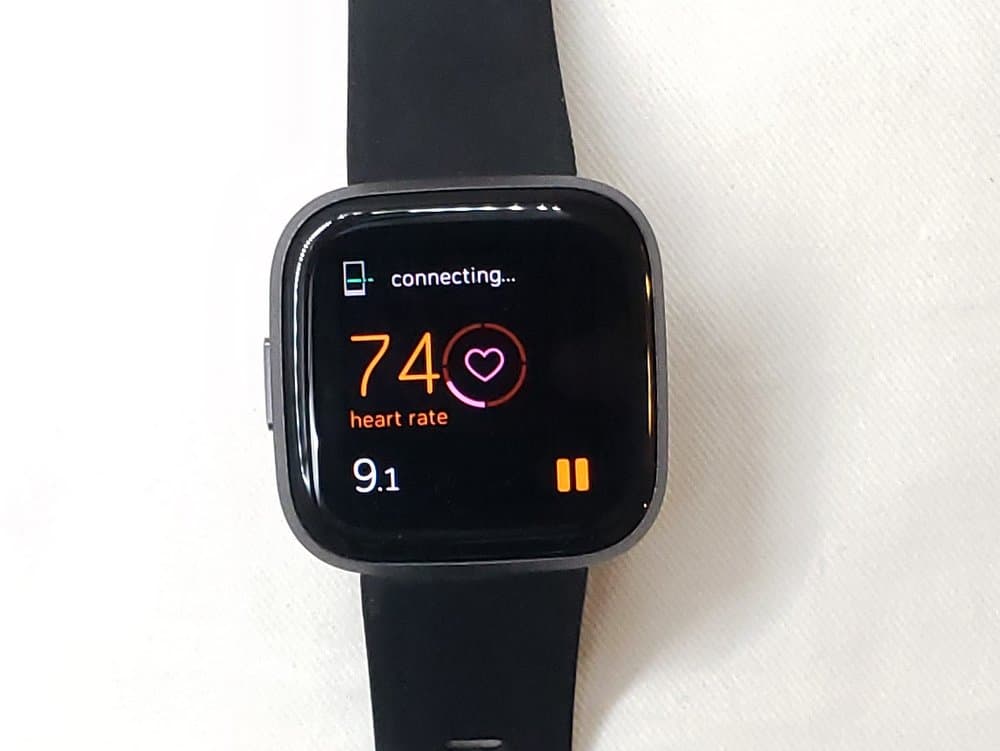 The exercise interface is beautiful and simple. It’s the same thin sans serif font but what I really liked was the heart rate readout. Unlike other smartwatches, the Fitbit tells you what zone you’re in such as fat burning and cardio-based on the reading of your heart rate. It’s simple to toggle between readouts by pressing the only physical button available.

A shortcoming here is that you can’t interact with the screen without taking your gloves off. While few smartwatches are capable of doing that, it would be a very welcome feature in the colder months. 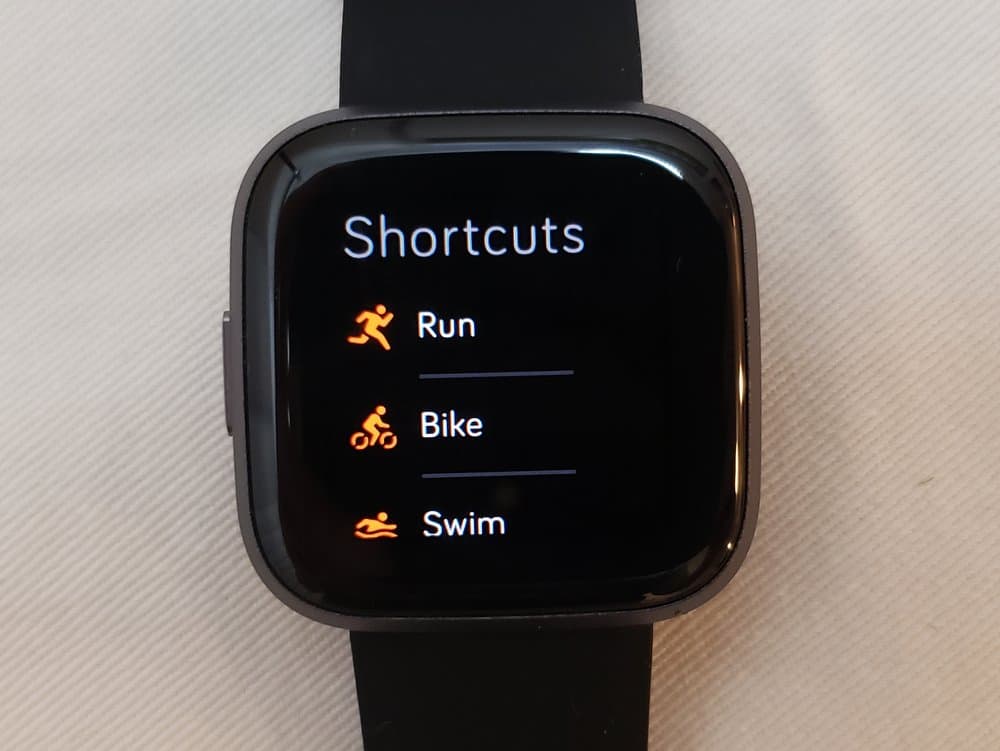 Bring your smartphone for GPS

The Versa 2 does not come with an integrated GPS, which means all location services depending on your cellphone being nearby. This might be a bit of a problem for people who run and do not want to carry a phone around.

Fitbit can automatically detect the activity you’re doing using its SmartTrack technology as long as it’s longer than 15 minutes by default. Otherwise, you’ll have to pick from the choice of activities which is good enough for most with the run, bike, swim being on the shortcuts menu.

Swimming is something that’s encouraged by Fitbit. The watch is resistant to 50 meters and Fitbit says you can use the watch to track your swims. And that’s why there’s the swimming activity within the exercise app, which is a bit of a rarity among smartwatches.

The Versa 2 also comes with 2.5GB of storage for your personal files including music. Using its integrated Bluetooth connection, you can use this as a music player through your Bluetooth earphones.

Although, again, not having an integrated GPS force you to carry your phone as an accompaniment when exercising, which also partially defeats the purpose of putting music on your watch as you could have your whole playlist on your phone rather than a truncated one on your watch.

Buying into the Fitbit also opens up doors into its social network that has forums for various activities such as swimming, hiking, and diets. It feels like a mix-up between Facebook and Reddit.

App is gorgeous and useful 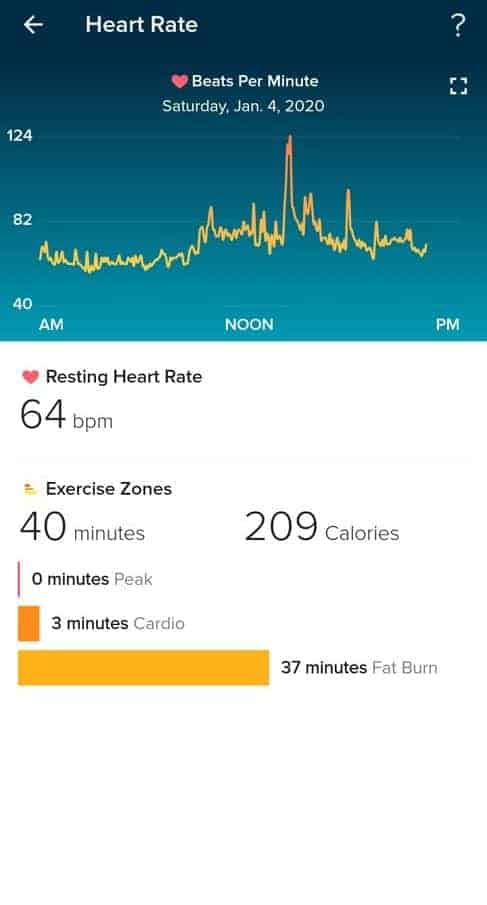 I really, really, really love the data visualization on the Fitbit. It blows Samsung Health or Google Fit-out of the water because of its beautiful interface and the way information is laid out. It’s a lot easier to visualize how your sleep is because of Fitbit’s choice of colors (red means awake, deep blue means deep sleep, for example). Its exercise page also gives you all the information about your previous activity on one page.

The one thing I dislike is the idea of Fitbit Premium. Some statistics are not available if you did not pay for a subscription to Fitbit Premium. Yes, it gives you guided programs and dynamic workouts which I believe is worth paying for since it takes time to create these programs. But what I find annoying is that some analytics such as sleeping heart rate is not available to the regular user. I expect that this data is already available, Fitbit just keeps it behind a paywall.

What’s the value of class-leading fitness data to you?

That is the question if you are deciding between another smartwatch and the Fitbit Versa 2. On the one hand, I believe that the Fitbit has much to offer to people who aspire to keep fit or get some encouragement to be more active. Just remember to also weigh the importance of an integrated GPS because the Versa doesn’t have one.

On the other, I was a bit disappointed by how I was hesitating to call this a smartwatch. A “smartwatch” usually suggests some synergy between itself and the smartphone. To some extent, it fulfills that criterion as you can respond to messages and control your Spotify from the watch. It also comes with Alexa as a speech-to-text system and it works well. It’s just that the implementation is a bit coarse and unstreamlined, making everything just a bit more difficult.

But if you view the Versa as a fitness tracker first (and it’s frequent step goal reminders will drive the point home), and let its shortfalls as a smartwatch slide, you might be able to understand its raison d’etre much easier.