Travel in time and take a closer look at the bonnet hat with its timeless beauty and function. Learn all about the different types of bonnet, the materials used and where to buy them.

The word “bonnet” refers to more than just a sleeping cap or hair bonnet. This versatile hat has a whole history behind it. Find out where the bonnet originated, who wears it (or wore it), and how modern bonnets are different from those in the 1800s.

Go back in history with me, and let us explore a very versatile hat – the bonnet. Modern bonnets are very different from historical bonnets (they almost don’t deserve to be called the same thing). From protective head covering to fashion statement to sleeping cap… Read on to find out what a bonnet is!

What is a bonnet? 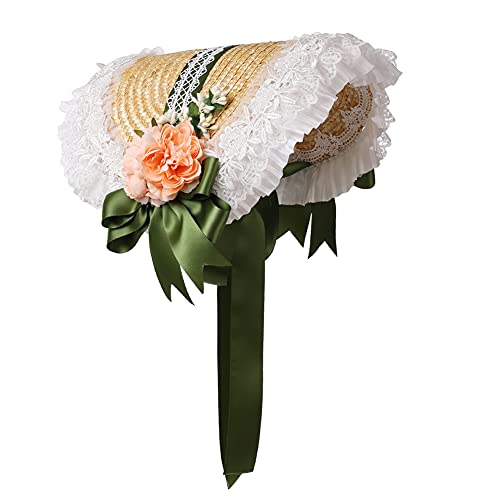 The word bonnet is derived from French and means a type of material. The term has been used to refer to many different types of headgear in a variety of styles.

Bonnets are fabric hats without a brim, usually made with soft material that wraps all around the head, framing the face, with the forehead usually not covered. Old-fashioned bonnets were cloth caps that were tied with strings or ribbons under the chin. Most brimless hats nowadays are called bonnets.

Originally, bonnets weren’t meant to make a fashion statement. Instead, people mostly wore them to protect or cover the hair from dust and sun when outdoors. But bonnets drastically changed in shape and style throughout history. Bonnets went from lower-class caps that served a purpose to frilly headpieces that served no purpose other than making a fashion statement.

Bonnets have also been worn for social or religious purposes, usually to display modesty, especially amongst women.

In today’s modern times, bonnets are mostly worn by babies as a protective and warm head covering. Bonnets, as we know them today, may also be called “sleeping caps.” They are usually made from silk or satin and are mostly worn by African-American women to protect their hair from damage and frizz when they sleep.

The history of bonnets

Bonnets have been with us for a very long time. Throughout history, many different styles and varieties of bonnets were invented and worn for different reasons and on different occasions.

The bonnet was introduced in the Middle Ages and was mostly worn by women and children. Women and children wore a coif, a cap made with lightweight fabric tied around the head with two strings under the chin. People mostly wore it for reasons relating to modesty. The bonnets worn by men were durable, all-purpose caps made of wool.

In the 1700s, bonnets were cloth head coverings worn by women to protect the head and the hair from weather conditions like wind, rain, sun, and dust. These hats usually had a small brim in the front but were brimless at the back, having a piece of fabric sewn to the back to protect the neck. The cap is tied with ribbons or strings at the bottom of the chin. These bonnets were only worn by rural women and were called slat bonnets.

Slaves and servants also wore bonnets. Maidservants and household slaves wore traditional European maid-style fabric bonnets as part of hygiene measures put in place by the master of the house. In contrast, fieldworkers wore hand-tied sunbonnets as protection against sun, dust, and wind.

During the 1810s, the women wore inexpensive bonnets made from straw or buckram covered in silk. Feather plumes and silk bows were sometimes used to decorate the bonnet.

During the era of the American Civil War in the early 1860s, the spoon bonnet was introduced. This bonnet served as a decorative fashion accessory, having a wide brim at the front that rose from the crown. The brim created a shallow spoon-like shape that gave the spoon bonnet its unique name. The brim served little other purposes besides being decorative. Ruffles, lace, silk, and bows were used to decorate the hat’s brim, especially amongst wealthy women. Bonnets with a longer brim were called poke bonnets.

In the 1880s, women wore elaborate hairstyles that they didn’t want to hide underneath a cap. For this reason, bonnets were much smaller and sat on top of the head, serving the purpose of an ornamental accessory or a frivolous fashion statement. Later, bigger and taller hats became popular and sadly pushed bonnets down the fashion ladder until the 1900s.

The bonnet made a brief resurgence in the 1940s when small hats with feathers, flowers, and veiling became popular again. It didn’t last long because hats weren’t as popular anymore after the war, and it was considered appropriate for women to show their hair. Decorative bonnets went out of fashion after that, and nowadays, people only wear them to costume parties or Victorian-themed dress-up events.

What’s the difference between a bonnet and a hat?

Hats are made of stiff materials with a flat brim and crown and worn on top of the head. Hat brims span the whole width of the head. Bonnets are made of soft fabric and are pushed back, covering the back of the head with two strings or ribbons tying under the chin. Bonnets do not have a firm crown, and not all types of bonnets have brims. If they do, the brims are vertical and positioned only at the front part of the bonnet.

What are bonnets used for today?

The type of bonnets available in contemporary times is worn exclusively by babies and women with damage-prone, curly or kinky hair.

Baby bonnets are made of soft fabric like cotton and are worn to provide warmth and cushioning at night and to protect a baby’s delicate skin from the sun during the day.

Women with naturally kinky, curly, or coiled hair wear bonnets made from satin or silk to protect their hair and preserve their hairstyle as they sleep. Wearing a hair bonnet at night while you sleep prevents friction from damaging the hair and causing frizz and helps preserve moisture in the hair.

The meaning of the word bonnet has become more specialized over the past few years. Historical bonnets looked much different and were used for many different reasons. 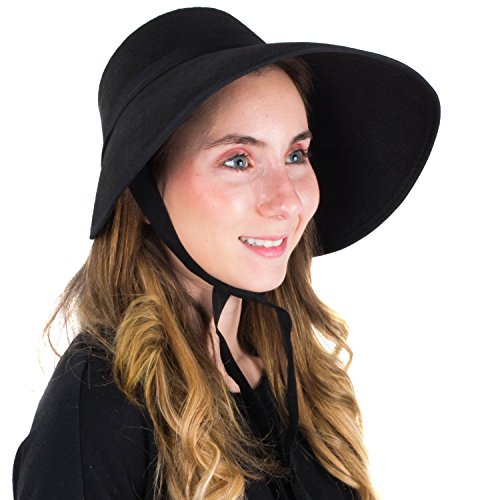 Capote in French means “hood.” The capote bonnet was a women’s bonnet with a stiff fabric brim and a soft gathered crown with ribbons tied at the front. This bonnet was popular between the 1790s and 1830s. 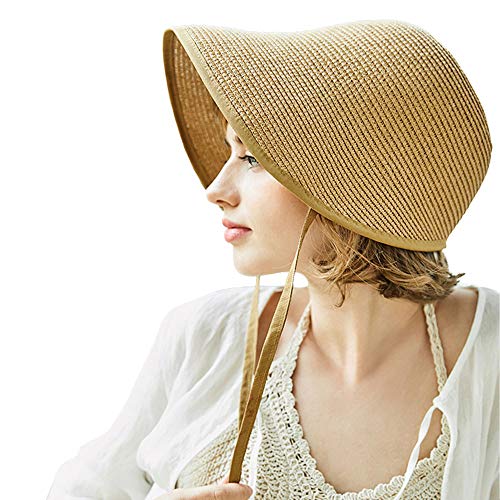 Popular in the 1800s, the straw bonnet was made from straw and was typically worn during the day in warm seasons like spring or summer to protect the wearer from the heat and the sun.

Leghorn bonnets were made from fine plaited straw called leghorn. The leghorn bonnet was stiff and had a deep or flat crown with a big upturned brim. They were worn during the 1830s and were the best straw bonnets on the market.

Chip bonnets were similar to straw bonnets but were made out of thin chips of wood woven to form the shape of whichever bonnet was fashionable at the time. They were less flexible and more sturdy than straw hats and were trimmed, bleached, and decorated to enhance their appearance. 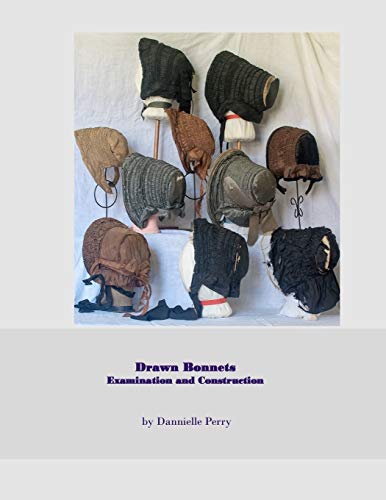 Drawn bonnets were one of the types of bonnets worn by wealthy women during the mid-1800s. The bonnet consisted of silk or sheer fabric sown or drawn onto cane, which acted as a supportive foundation for the hat. Decoration like silk flowers and netting were also sewn onto the hat to make it suitable as formalwear amongst the upper-class ladies.

Spoon bonnets were wide-brimmed bonnets that completely revealed the forehead and face. They were primarily just decorative headpieces and were not worn for protection against wind, sun, and rain. They were elaborately decorated with ribbons, lace, flowers and frills, and ruches. They were popular in the 1850s but fell out of fashion after that.

The Calash bonnet was a millinery item worn in the mid-1700s. Its sole purpose was for modesty in women and to protect the head and hair from the weather. It was a collapsible bonnet with whalebone stiffeners or cane hoops with a string tying in the front. The string in front allowed the collapsible crown top to be drawn out to cover the head when outside or drawn back in folds over the back of the head when inside.

Poke bonnets had a long, deep, projecting brim at the front of the hat with a flat crown at the back. They were popular in the late 18th century until the mid 19th century. Since they concealed and protected the face, women mostly wore these during autumn and winter for formal occasions.

The gypsy bonnet was a saucer-shaped bonnet with a flat or shallow crown tied down with a sash or a scarf at the nape of the neck. These bonnets were popular during the 19th century.

Women wore mourning bonnets during the 1800s as part of the daily attire they had to wear after losing a family member (or their husbands). It has also been called a “widow’s cap” or a “mourning veil.” It had social and religious significance and had to be worn throughout the entire mourning period, along with a black dress.

It was always made of black silk and covered the entire head, tying at the bottom of the chin. The bonnet also had a long crepe veil that covered the face.

Although women typically wear bonnets, there are certainly a few incidences where bonnets have donned the heads of men too! The Scottish people still use the word “bonnet” to describe forms of male headgear, and most men’s bonnets originated in Scotland.

Made from soft, wool-like material, the bluebonnet was seen as part of the customary work attire of farmworkers and laborers during the 1800s. Later, it became popular as Highland dress and military gear.

The balmoral bonnet is a stiff, cylindrical cap with an ostrich plume attached to the crown, usually sweeping from left to right. It served as full-dress headgear amongst Scottish Highland regiments until the mid-19th century.

Popular as a headdress in the Scottish military, the feather bonnet consisted of black ostrich feather mounted on a wire substructure with a red and white checkered band securing it on the head. It has a red plume extending from the crown.

A traditional Scottish woolen cap with a red tassel on top (called a ‘toorie’) and black ribbons dangling down the back. Some caps have a rosette cockade attached to the left side. These bonnets are popular amongst the Scottish and Irish militants and are still worn today.

Bonnets in the Victorian era (1830 – 1890) were made of different materials, some being cheaper than others. The chief materials used include:

Modern bonnets are used as sleeping caps to protect the hair. These bonnets are mostly made of silk or satin.

Where to buy a bonnet and how much it costs

If you are thinking of throwing an 1800’s Victorian-themed costume party, then an old-fashioned bonnet adorned with feathers and lace would be your go-to hat. Vintage bonnets can be bought on Amazon and range from $9 up to $40.

Modern bonnets or sleeping caps are available at most retail stores, usually in the health and beauty aisle. You can also buy them on Amazon. Silk or satin sleeping bonnets usually go for between $6 to $15 for one.

Encyclopedia: Headwear of the Middle Ages

Mentalitch: The History of the Bonnet

Infobloom: What Are the Different Types of Bonnets?