Adjust your coat and pat the dust from your shoulder as we take a close look at ivy caps, their history, how to properly wear them, which celebrities like them and where to buy them.

The ivy cap is a triumph of minimalist style and function, which explains its long history and wide popularity. Worn by aristocrats, gangsters, and fashionistas alike, the ivy cap is a worthwhile addition to any wardrobe. Add an ivy cap, whether the classic tweed flat cap or an edgy leather number, if you’re looking to up your style game.

What is an ivy cap?

An ivy cap or driver’s cap is a flat cap with a stiff, short brim or peak in front. The cap has a low crown, set forward and attached to the brim, often by a small snap. Generally, the cap is made from three fabric sections, with one large, flat crown section, and stitched from front to back, with the stiff brim keeping the hat’s rounded shape.

Ivy caps are usually made from cotton or wool cloth, particularly herringbone tweed, although you can buy fashion-forward caps in leather and suede. Cheaper caps are made from polyester. Ivy caps are lined, either in silk or satin, for extra comfort and warmth.

Because of its long history, dating back to sixteenth-century England, and then brought to the States, the ivy cap goes by various names. Known as a flat cap in the UK, the cap’s popularity in Boston and among Ivy League students has earned it the name “ivy cap” in the States.

Today, ivy caps are a staple fashion item, sported on the golf course, fashion runway, and by a variety of style-conscious celebs.

Is the ivy cap in fashion?

Always in style with preppy types and golfers, the ivy cap enjoyed a fashion heyday in the 1990s, with Kangol cornering the market.

But the ivy cap is back and trending, seen from New York to Hollywood. The show Peaky Blinders has put the flat cap back on the map.

Celebrities like David Beckham and Pharrell have always sported ivy caps, and now this iconic cap is enjoying a fashion renaissance.

What are the different kinds of ivy caps, and what are they made of?

Since ivy caps have been around for centuries, it’s not surprising that some variations have developed.

The classic ivy cap is flat, with a rounded crown. The short brim or peak is stiff, and the forward-facing crown clips onto it or are sewn directly onto it. These flat caps are made in many different fabrics.

The original ivy caps were wool or wool-blend and often came in dark colors, black, brown, and navy. For a luxurious choice, wear cashmere. 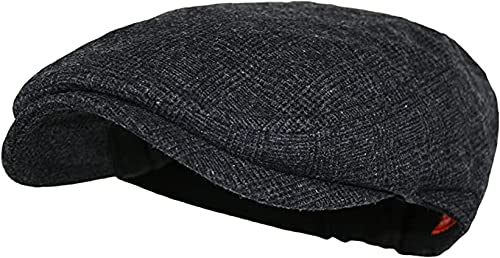 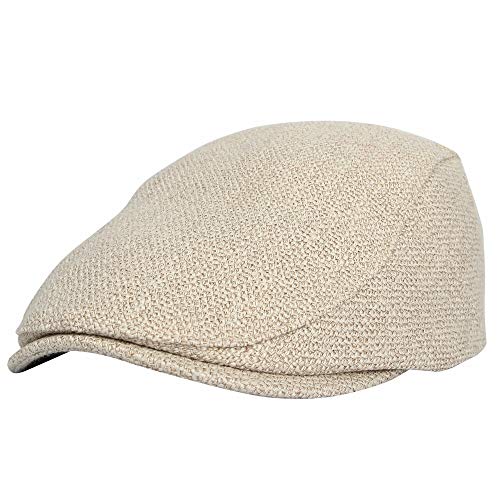 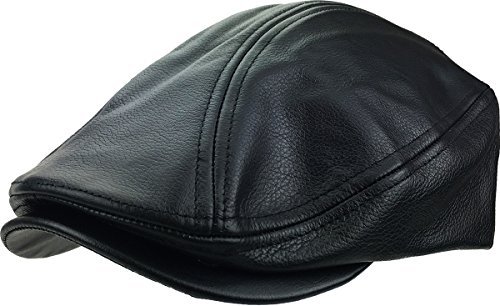 To avoid the country gentleman look, choose a leather ivy cap with a subtle urban message. These caps are edgy and exciting. 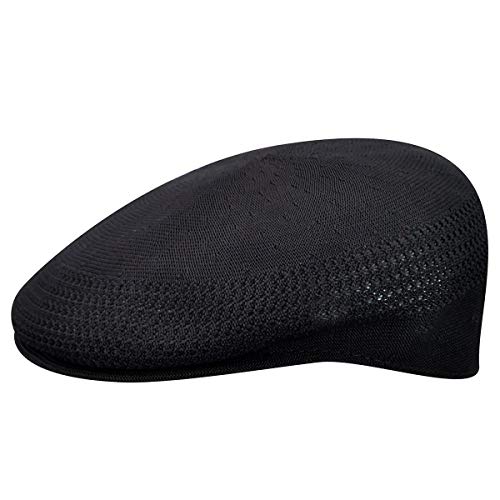 The ivy cap by Kangol was one of the must-have 90s accessories, usually worn backward with the logo showing on the forehead. Newer Kangol styles are updated and on-trend, with styles made in bamboo and mesh. 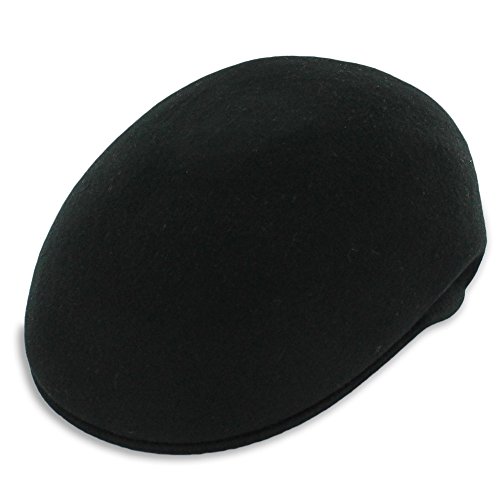 The Ascot cap, also called the Cuffley or Lippencot cap, differs in its style and materials. Usually, the Ascot cap is stiffer with a rounder crown and made from a single piece of firm material, like felt, thus no seams. A winter version is made from corduroy, known as the Guinness, and a summer version from straw. Ascot caps are generally unlined. 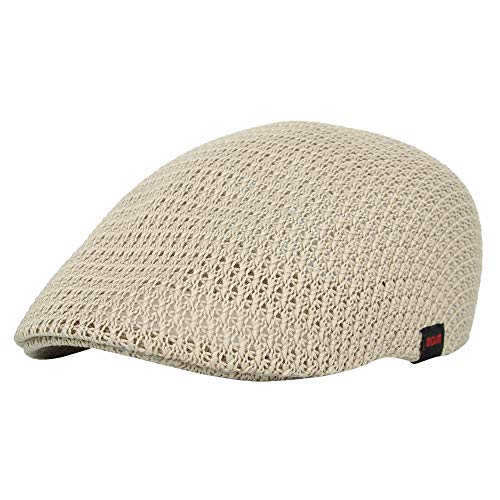 Another version of the ivy cap is the duckbill cap, which has a slightly different shape. The cap has a more rounded crown and longer, sloped bill – in profile, the cap looks like a duck, hence the name. Because of the bigger brim or bill, the cap sits lower on the forehead than the traditional ivy cap.

How to wear an ivy cap

There is an ivy cap for every season and every style, and you should match your cap to both. That being said, ivy caps aren’t the first choice for formal wear or a hot summer’s day with shorts.

A winter cap is a good start for first-time ivy cap wearers, as traditional ivy caps are warm and woolen. Tweed caps are a touch more upscale and look good in both solid and patterned fabrics. Try a winter look with a coat, collared shirt, sweater, or vest, with a favorite pair of jeans. This is a gorgeous vintage style for women.

For a spring or fall look, wear a cotton ivy cap which can take you from brunch to the park with the kids and onto shopping and errands. This is a more casual look, but a step up from tracksuit and baseball cap.

The leather ivy cap can also be an edgy addition to your wardrobe, especially in an alternative fabric.

The backward cap may have looked great on Samuel L. Jackson, but this style has been and gone. Wear the cap firmly facing forwards, not leaning to one side.

2. Make sure the cap fits

The ivy cap is a neat, minimalist style, so it should hug your forehead comfortably. This is not a good choice for oversize headgear, and if your hat’s floppy, take it off.

An artsy girl may be able to carry off a full-on Peaky Blinders look, but the average guy will look plain weird in suspenders, spats, and an ivy cap. Wear your ivy cap with your daily duds.

What can I wear instead of an ivy cap?

If you’re not quite comfortable wearing an ivy cap, there are a couple of other styles of cap that will suit you.

A classic baseball cap is always a safe option, especially for summer wear. Baseball caps offer a bit more shade and protection and are an all-American choice.

A newsboy cap has a very similar vibe to an ivy cap but is softer, with a more generous and baggy crown if you’ve got a bigger head or plenty of hair.

Pros and cons of the ivy cap

Love it or hate it, the ivy cap is here to stay. Are you convinced?

Pros of the ivy cap

Cons of the ivy cap

A history of the ivy cap

Although flat caps have been worn since the fourteenth century, they became compulsory in Britain in 1571 when the government announced that all men had to wear a woolen cap on Sundays to boost the wool industry. Members of the aristocracy didn’t have to wear these caps.

Although the law was later repealed, the flat cap had become part of the working man’s daily uniform and remained popular until the 1950s. Although caps became everyday wear for country gentlemen, the flat cap was embraced as part of working-class identity and referred to as a “Scally cap”.

In the nineteenth century, the flat cap was brought to the States by immigrants, predominantly the Irish. The flat cap was also famous as part of school uniforms for boys, with knickerbocker suits until the 1930s. The cap came to be called the “ivy cap”, after the Ivy League schools. However, the cap’s other wearers labeled it the Paddy cap or driver’s cap, associated with the working men of Boston and New York.

The ivy cap came into its own as an accessory in the 1990s, with celebrities like Samuel L. Jackson making the Kangol version of the cap popular.

Because ivy caps are trending, you can pick one up at most stores, including Levis and the Gap. There’s a massive variety on Amazon to suit any price range and style.

For a classic ivy cap, you need to go to Boston. Boston Scally Co. has a variety of caps from all materials for around $50.

If you want to go rapper, Kangol still makes their classic caps for under $50.

For traditional tweed ivy caps, look at Timberland or British stores like Next and Marks and Spencers, where you’ll pay over $100 for pure tweed. Order from a bespoke milliner for pure luxury and pay hundreds of dollars – but the cap will last you a lifetime.