Thinking of buying Armani apparel? Here are fun facts that you need to know including its history, other properties, and the differences among its several labels. 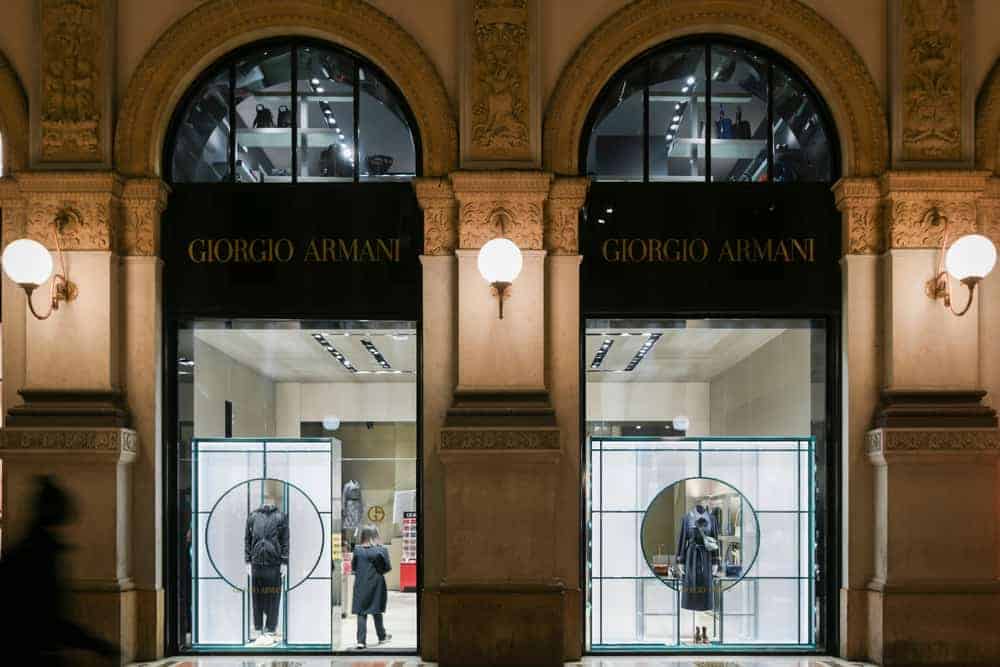 When most people hear the name Armani, they automatically think of sophisticated and timeless clothing apparel but there’s so much more to the Armani brand than that.

The founder of Armani is Giorgio Armani who was born in Piacenza, Italy. After serving for a brief time in the military, he broke into the fashion industry after launching his career as a window dresser. He gained an in-depth knowledge of different types of fabrics in fashion design and in 1964, he was hired as a designer for the men’s clothing company Hitman.

After he left to branch out on his own in 1975, he launched a menswear label and a year later, a label exclusively for women’s wear. He transformed the wardrobes of professional women in the 1980s era when deconstructed pantsuits in an array of elegant colors became all the rage.

He has since developed other companies and offers jewelry and aftershaves along with his luxury garments and lower-cost apparel lines that have timeless style and global mass appeal.

With so many different brands and products to choose from, how do you know what to look for? Below is some great information to help you out as part of our Armani Review.

The Armani Brand is More Than Just Clothing

From the Emporio Armani line to the first Armani line, the fashion label has grown and changed over the years. By the end of the 1990s, the Armani brand had over 200 stores throughout the world, including the Georgio Armani boutique. His other fashion lines include Emporio Armani, Armani Exchange, Armani Jeans, Armani Exchange A/X, Armani Collezioni, and bring in about $2 billion dollars in sales each year. with annual sales of $2 billion. Armani has continued to grow his brand over the years, branching out into make-up, household goods, a sportswear line, and even book publishing.

The Company Has Value

With an array of sub-brands under the Armani umbrella, it is no surprise that the company is valued at about $3.1 billion. Send Giorgio Armani has created products for a variety of different markets, his label has become one of the strongest fashion and luxury brands in the entire world and one of the most highly valued fashion brands throughout the world. The original and main collection of the Armani brand, the signature Giorgio Armani line features an extremely high-quality classic style of peril that encompasses the signature Armani suits, gowns to be worn to the Oscars, and so much more.

The clothing items under this label are very expensive and are targeted towards customers that range from the age of 35 to 50 and older. If you want to purchase clothing in this line, you better have a large wallet.

Giorgio Armani created the luxury sportswear brand, EA7, in conjunction with Reebok. It offers the latest clothing and shoes, manufactured with the latest technology for sportswear. You can purchase all things sports-related, from clothing to wear to the gym to ski wear and everything in between.

All of the options are made of the highest-quality materials. Whether you need an awesome-looking tracksuit or a cool pair of shorts, this sportswear line has it all. Giorgio Armani has said that the EA7  was inspired by Ukrainian footballer Andriy Shevchenko.

The footballer played at that time for A.C. Milan and the jersey that he wore boasted the number 7. Armani Prive is the haute couture offering from none other than the great fashion designer Giorgio Armani. Armani kicked off this line by showing 31 looks in 2005 at the haute couture fashion shows throughout the world. This line offers gala and award-show wear, such as evening gowns and gorgeous men’s suits that are super luxurious and offer an understated brand of chic style that is a signature part of the Giorgio Armani brand.

This line is basically for people who are not only famous but rich also. From amazing clothing for both men and women to heavenly unisex fragrances, this line offers something for everyone. Some of the most popular fragrances in the Armani Prive line include Bois d’ Encens, which is my favorite, along with, Oud Royal, Myrrhe Imperiale, Encens Satin, and Rose Arabie, which are all great too. As one of the most respected and purchased brands in the fashion industry, many well-known celebrities who rock Armani clothing can use the other products produced under the Armani label. Some of the most well-known celebrities are Cristiano Ronaldo, David and Victoria Beckham, Rafael Nadal, Megan Fox, Britney Spears, and Rihanna. Many of them have been seen on the red carpet at star-studded events wearing the clothing from the Armani Prive label.

The Emporio Armani line was created for young professionals in the age range of 25 to 35 years old. This line offers beautiful and fashionable clothing in contemporary designs that are much more affordable than the original Giorgio Armani line of clothing. If you are on a budget but love the Armani label, this is the clothing line for you.  It includes designs for both women and men.

Armani Has Restaurants and Cafés Too

Oh yes, you read that right. Giorgio Armani has created a chain of restaurants and cafés that bear his name. It was a bold move for him to move into the food business but so far it has been successful with 16 restaurants and cafés open across the world that include one in the USA, seven in Asia, and eight in Europe. The restaurants are gorgeously designed and offer only the best cuisine.

Hotels and Resorts by Armani Armani Hotels and Resorts started being designed in 2005 after Armani struck a deal with the property group Emaar that is based in Dubai. The first resort is called Armani Residences in it is a luxury neighborhood of 144 private residential homes located in Burj Dubai.

Currently, Armani offers suites in the Armani hotel Dubai comma which is considered one of the most luxurious hotels in the entire world, and in 2011, the Armani Hotel Milano was launched. It is located in the Manzoni 31 building in the prestigious Quadrilatero Della Moda area. Under the Armani Exchange, a licensed chain of retail outlets is located throughout the world. This serves as the ultimate testimony to the power of the brand. Simply put, if you want to shop for the amazing fashion lines that fall under the Armani label but you want to do it in person, you need to head to an Armani exchange store so that you can check it all out and even try it on. Armani junior is the label for the kids in your life. This fashion brand is created specifically for babies Anne young children in it offers a sophisticated simple style with sleep tailoring in tons of amazing colors. It is inspired by the adult line of clothing and there is great attention to detail taken with each piece.

Armani Jeans In 2019, the Armani Group completed its 3-year streamlining transformation and has discontinued the following lines:

Armani Jeans are a little less expensive than the garments that fall under the umbrella of some of the other lines but they may even be more popular since the line is very affordable for most people. It caters more towards the 18 to 30-year-old age group but many people of older ages rock this line too. It is a very trendy and fashionable luxury line of apparel.

This is collection is Armani’s venture into a slightly lower priced market which means if you’re on a very tight budget but love you some Armani, this would be the line for you to purchase this line caters to people who aspire to wear high-quality Armani apparel but simply cannot yet afford those kinds of prices the price point of this collection is about 20% lower than the mainline of our money but still provides an amazing array of fashionable yet affordable options. Giorgio Armani announced in 2017 that his company would be closing two of its labels well he is in the process of restructuring his companies. those two labels include Armani Collezioni and Armani Jeans.

Armani Collezioni will be integrated back into the main “Giorgio Armani” line while the Armani Jeans fashion label is now part of the Emporio Armani line since the clothing already boasts a similar style as the clothing under this label and they both rock the same brand logo.

This Armani brand is for your home. Giorgio Armani created the line in his quest to promote his version of ideal living along with his vision of the most amazing environment to surround yourself with. The options in this line are designed to create a very intimate, comfortable, and relaxing space so you can relax, entertain, or just simply unwind.

It offers top-line furniture, textiles, decorative pieces, and home accessories that will look great in your house or apartment. This line also includes interior designs that are created for airplanes, villas, and yachts.

If you are searching for a gift for the food lover in your life, this Armani line is for you. It offers an array of baked goods, teas, jams, prey liens, honey, and even chocolates. Each product is created with the signature logo for Armani and they are made with high-quality ingredients to be deliciously rich and are encased in gorgeous packaging.

Giorgio Armani has now branched out in the flower business with his line, Fiori, which was created in 2000. This line of florals offers beauty and sophistication to the world of flowers and floral decor. The boutiques will create arrangements with decorative pieces to suit anyone’s taste. The first Armani museum was opened in April of 2015 in Milan, Italy, to mark the celebration of Giorgio Armani’s 40th year in the fashion business. Armani Silos is created with the Armani design philosophy. The building is shaped like a beehive by incorporating both geometric and uniform elements into it. The museum showcases 400 Armani outfits, along with 200 accessories from Armani’s ready-to-wear collection from 1980 to the current time period to celebrate his four decades in the fashion industry.

What is Armani most famous for?

Giorgio Armani is an Italian fashion designer that is met best known for his first line which was his menswear line. When he first started out over 40 years ago, he started with the menswear line and it was a big deal if you were dressed in an Armani suit.

He then expanded into making suits designed for women and his many labels and brands grew from there. He now has not only several clothing lines but tons of other products, including resorts, hotels, restaurants, bars, and cafés.

What makes Armani so special?

The look and sophistication of the Armani brand seem to be the draw for most people. The Armani designs have a sophisticated style with clean lines in an understated elegance that seems to draw people in to make them want more of the gorgeous, high-quality styles that Giorgio Armani and his labels produce.

What’s are the differences between Armani brands?

Armani Exchange clothes are created to be more colorful and daring since they are designed for a younger crowd than the luxury Giorgio Armani main brand. The Armani Exchange line is geared toward teens and young adults. Emporium Armani is created with 20 to 30 year-olds in mind.