Skip to Content
The ultimate sport smartwatch, the Garmin Fenix 6, goes up against the Suunto 7. Both of them have great offline maps and are great sports companions.

The Garmin Fenix 6 is a great smartwatch. If my goal were to improve my race times or if I enjoyed going on expeditions that required some long explanations to the wife/spouse as to why I’d do something so foolhardy and arduous, I’d take the Garmin Fenix 6.

Then recently, I also received the Suunto 7 and I realized that it’s also a great sport smartwatch, but perhaps it has carved its little niche somewhere a little less extreme than the Garmin Fenix 6 has placed itself in.

The Suunto 7 has a pretty average battery life. It tracked about four hours of continuous exercise and then went into power saving mode.

But not the Garmin Fenix 6. Its battery life is legendary.

I can wear the Garmin Fenix 6 24/7 for a week without charging it. If I wanted to record my workouts, I am certain it will outlast the Suunto 7 as I once kept the workout recorder running for 3 hours and 53 minutes. I don’t remember having any battery life concerns at the end of that workout.

The Garmin Fenix 6 has really epic battery life which makes it really suitable for really long workouts. So if you are a randonneur (super long distance cycling) or ultramarathoner, the Fenix 6 is the watch that has the battery life for your lifestyle. 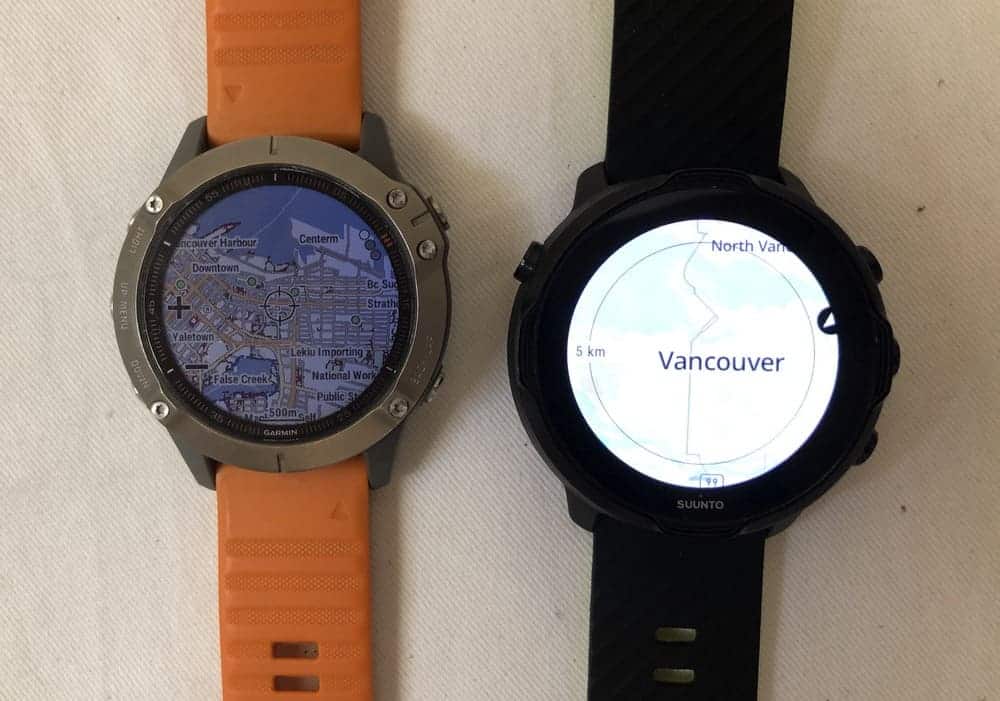 These two smartwatches have offline maps. On all Suunto 7s, they come as standard.

But on the Garmin Fenix 6, you used to only get them if you have the Pro/Sapphire versions or better. An email to Garmin confirmed that the base model does not have offline maps.

Either way, having maps on your wrist is an amazing innovation that I really like. In the summer, when I was exploring new forests and trails, or paddling in areas that I have never been before, I found the maps to be very practical.

Here’s why: my phone is much less convenient because it’s usually in a bag.

So, if let’s say I reach a fork and I have no idea where to go, having the maps on my wrist allows me to make that decision faster.

Both watches’ maps are quite detailed. The trails are pretty up to date and that’s great.

The Garmin Fenix 6 doesn’t have a touchscreen, so it can be somewhat tedious to use sometimes. But the Fenix 6 can come up with a bike commuting route, and the Suunto cannot.

The Suunto 7 has a cool feature called “heat maps” which tell you where other users frequent based on an activity.

But one downside with the Suunto 7 is that I couldn’t figure out a way to move the map around. It always seemed locked onto your location and the best you can do is to zoom out if you want to see places farther afield.

All in all, both smartwatches’ maps are really good. I do prefer the Garmin Fenix 6 for its bike commuting feature, but I also hate using the buttons to navigate around the screen. The Suunto 7’s maps are great but it isn’t as dynamic as the Garmin Fenix 6.

Both the Garmin Fenix 6 and the Suunto 7 offer a great slew of tools to help you further your sports goals.

The Fenix 6 consistently goes deeper in its metrics and in the features it has to enhance your sporting ability.

Let me lay out some examples:

Both smartwatches gauge how intense and beneficial your workouts are, but only on the Garmin Fenix 6 do you get a breakdown of whether your activity is benefiting aerobic or anaerobic.

The Suunto 7 has no coaching features on its smartphone app but the Garmin Connect app does. This means you can create a training routine for a run or cycling event and the Garmin Fenix 6 will remind you of your plan.

Both watches have many sports you can choose from. I like how there are also some less common sports in both.

All in all, these two watches are very similar in their sports capabilities, with the Garmin Fenix 6 having an edge because of its depth of analyses.

The Suunto 7 does not do sleep tracking by default. 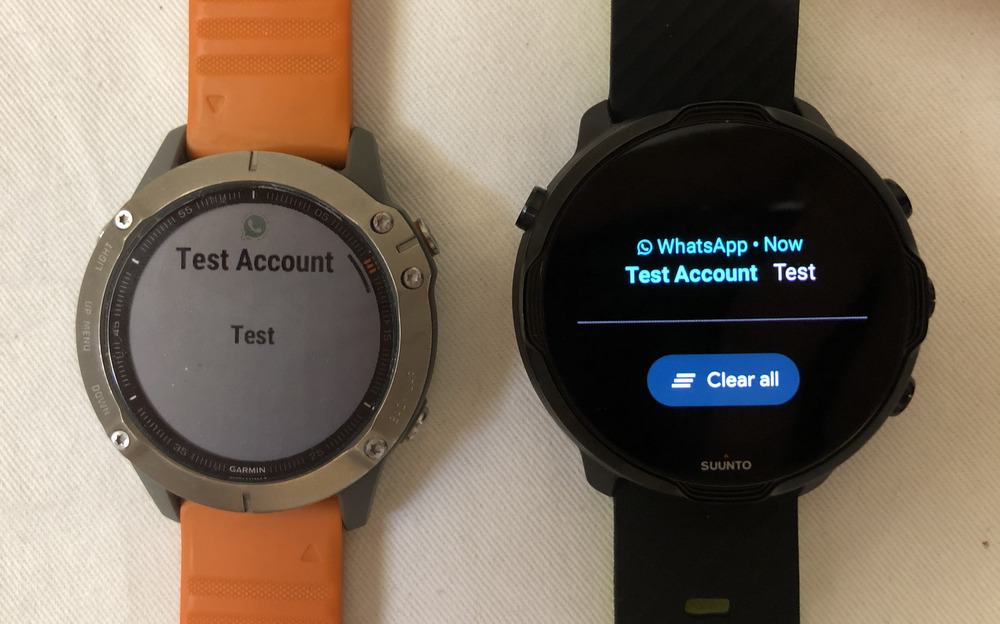 The two smartwatches come with distinctly different operating systems and it really shows.

Productivity is just so much higher with the Suunto 7 because it runs on the Wear OS by Google.

Whereas the Garmin Fenix 6 runs on a proprietary Garmin operating system.

Heck, the Garmin Fenix 6 does not have a touchscreen. It’s a bit problematic sometimes because you are forced to guess which one of its five buttons is the right button to press.

The Suunto 7 has a touchscreen and four buttons which I really like. The touchscreen is great for efficiency as you can go through menus much faster.

Speech to text and messages

If there were a boy crying wolf on top of the hill, the Garmin would never know, but the Suunto would.

Because the Garmin does not have a microphone.

Therefore it doesn’t have many features that are on the Suunto that really enhance productivity.

For example, when you get a message or email, you might want to reply on your smartwatch. Say you’re in the middle of an activity but need to reply ASAP.

On the Garmin Fenix 6, you are unfortunately forced to send one of the pre-composed messages (which you can customize) or you’ll have to head straight to your phone for anything more complex.

On the Suunto 7, you can use Google’s speech to text transcriber, and it generally does a really good job. 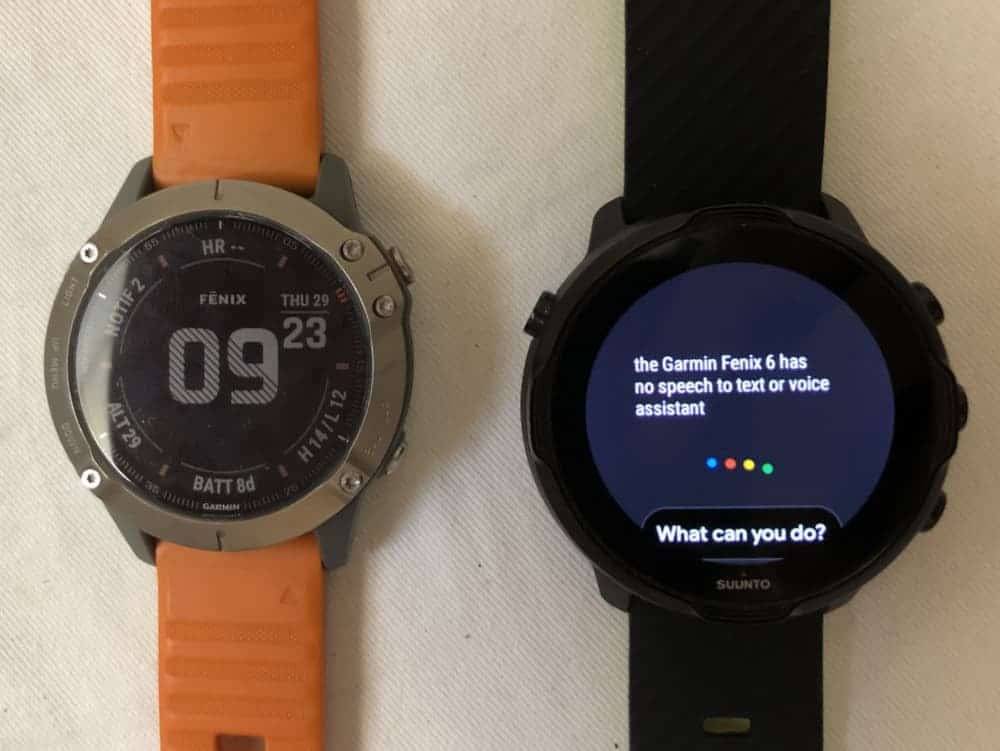 The Garmin Fenix 6 does not have one. So if you want to set a timer, be prepared to do it very, very manually.

That really sucks because you don’t even have a touchscreen.

Whereas with the Suunto 7, you can tell Google Assistant to do it for you, as you can ask it to tell you the weather, find information and other tedious tasks.

This is a really great feature to have and it’s one of the biggest conveniences of having a smartwatch. 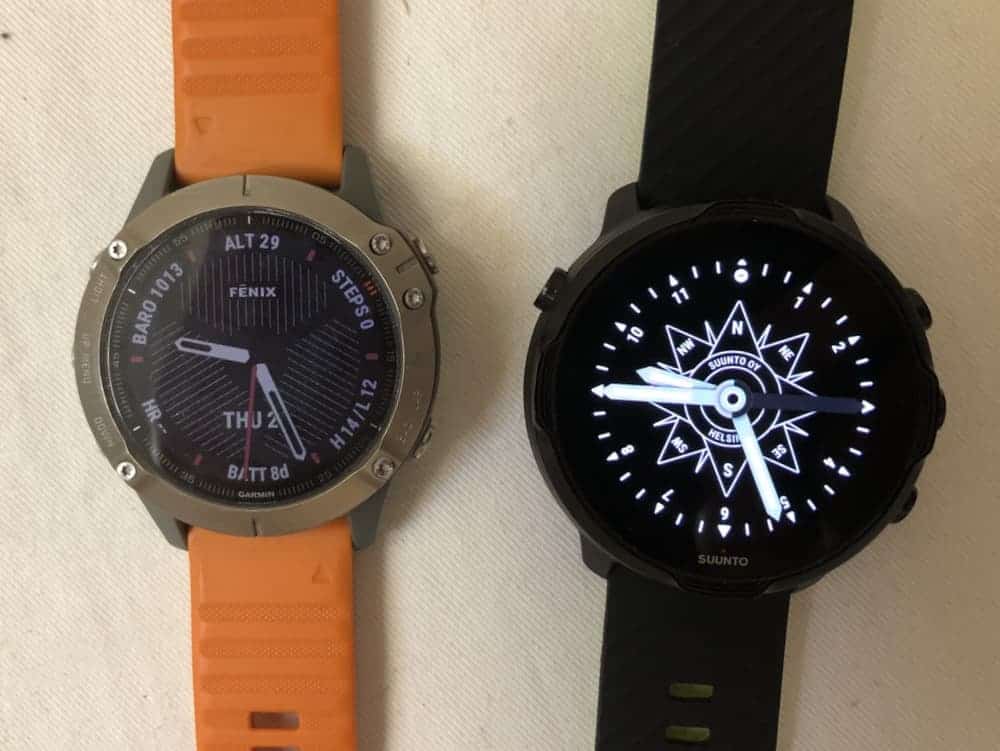 Are you named after an animal like “Tiger” (Woods) or “Bear” (Grylls)?

It’s the ultimate sport smartwatch. It lasts so long and can tell you information that no other smartwatch can.

Its offline maps are also fantastic.

But most people would do fine with the more typical Suunto 7. It’s not as good as the Garmin Fenix 6 in depth of sports data but it’s excellent in helping you get more done on your wrist.

Its offline map function is also pretty respectable. I like it and I could live with it even if it weren’t as advanced as the Garmin Fenix 6.