Fedora hats are a timeless and stylish type of hat that’s worn by both men and women. There are many types of fedora hats, and this article explores the popular options to help give you an idea of what might suit your fashion needs and preferences.

The fedora hat made its first appearance in 1882, but it was only a women’s hat. Today, there are now women and men’s fedoras for all sorts of fashion statements. It has also diversified beyond that to include many different styles.

However, a fedora hat is still classified as a hat with a soft brim and indented crown. From this basic description, you then get variations that give rise to different types of fedora hats. This article explores many kinds of fedora hats, their names, and other factors like brim width and material.

Types of Fedora Hats Based on Material

Fedoras are more commonly classified by the type of material they’re made from. Here are some examples of popular material for fedora hats.

Felt fedoras are one of the top best-selling fedora hats on the market. They can be further classified into the following types of fedora hats: 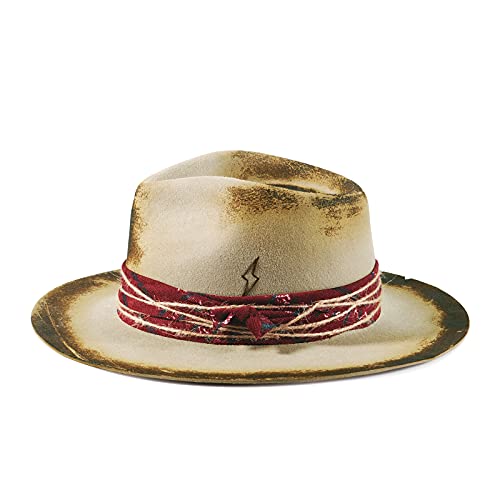 A felt fedora hat is usually made from wool since it’s a less expensive option than an animal felt. Plus, fedora hats made from wool felt have a pleasant, soft feel and the ability to retain their shape, which is all desirable and sought-after characteristics in a fedora felt hat.

Animal fur is also soft and has a more delicate texture that differs slightly from wool. They can be made from beaver or rabbit fur or more expensive and exotic furs like a chinchilla. Typically, animal felt fedoras are worn in upmarket environments and fit right in highly formal environments.

A straw fedora hat is a versatile type of fedora hat that can be worn casually for sporting events or formally in outdoor weddings or horse racing functions. This versatility depends on the type of straw used to make the fedora hat. For example, if the straw fedora is made from a fine straw that’s soft and supple with a high sheen, it will be more suitable for dressy functions.

The great thing about straw fedoras is their bright texture, lightweight feel, and the way they allow for more airflow. But they can easily be crushed and lose shape (unless you opt for one with a crack-resistant liner). Plus, they can’t be worn in the rainy season if they’re not waterproof.

However, if you want a more durable hat with a similar style, you can opt for a Panama hat.

Types of Fedora Hats Based on the Brim

Fedoras can also be referred to based on the size of the brim, i.e., is the brim wide or small?

Generally, wide brim ranges anywhere from 4 inches to 10 inches, though this can vary. A wide brim fedora tends to be more common than a short brim fedora and can sometimes be referred to as a floppy hat. Usually, people opt for this style if they want a more eye-catching and dramatic look.

Additionally, the wide brim offers more protection from the sun, making it a great fashion option in summer. 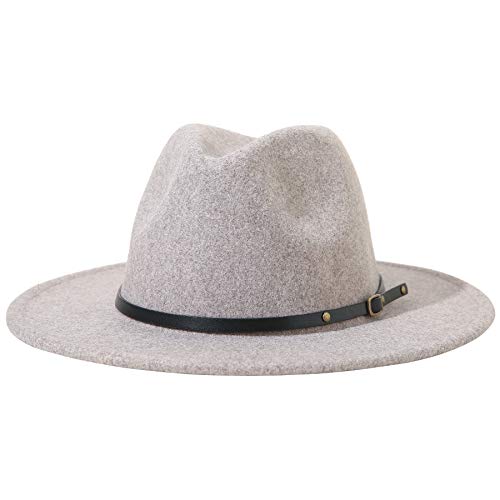 A small brim fedora has all the appearance of a traditional fedora except for the noticeably shorter brim. Sometimes, this is the first thing people notice, which is why a small brimmed fedora can be easily confused with a trilby hat.

Types of Fedora Hats Based on Crown

The crown is an easily identifiable part of the fedora, and if you look around, you’ll notice that most fedoras have one of three crown styles. However, there’s no one style that’s discernibly better than the other. It all comes down to preferences and what you think is more aesthetically pleasing. 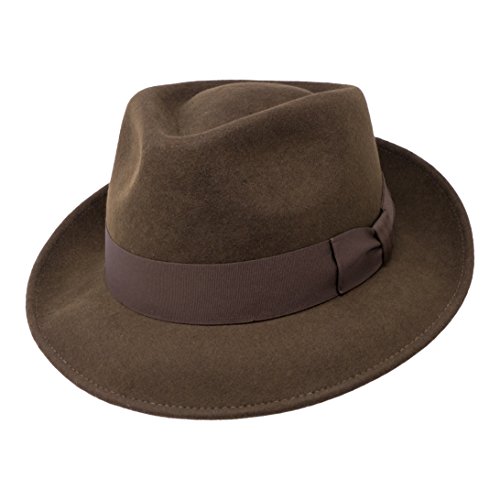 This teardrop-shaped crown is also known as a pinched c-crown – it’s narrow at the hat’s front and more rounded at the back. Unlike the diamond and crown shape, it has smoother edges and a lower profile, making it more visible on the wearer’s head.

In addition, some people consider the teardrop shape to be more natural and conservative, so it may be suitable for formal events. 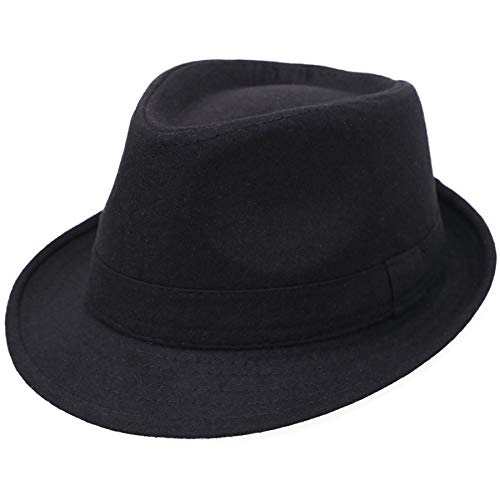 No doubt this is the classic fedora hat look, and the name is pretty explanatory – it has a simple crease that starts at the front and extends through to the back. The hats have a pinched crown in most instances, though you’ll find others with a geometrical or square shape. Fedora hats with this type of crown are sometimes known as the Borsalino fedora, an Italian brand hatmaker founded by Giuseppe Borsalino, who came up with this type of crown. 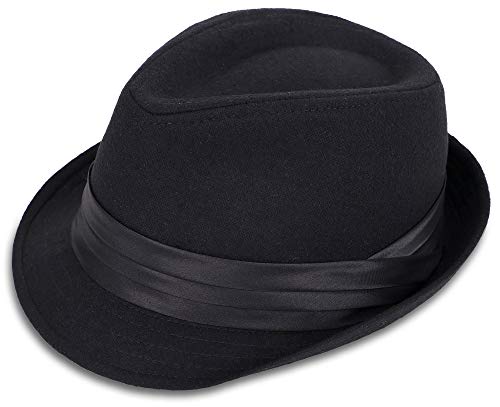 This type of crown can be easily recognized by its kite-like appearance and its four-fold, domed aspect when observed from above. It has one point at the front of the hat and three other points at the back. Though not as classic as the center dent crown, the diamond crown does have a contemporary appeal that makes it increasingly fashionable.

Types of Fedora Hats Based on the Edge

You’ll also find that fedora hats have some differences when it comes to their edges. Therefore, they can be classified as follows: 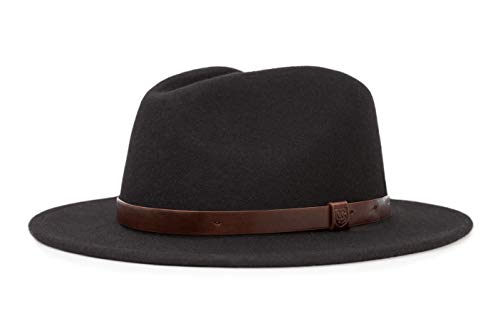 This is a “bare bones” type of fedora with a simple design and no embellishments on the edge. In other words, the edge of the brim is simply cut and left unfinished.

With this type of fedora, the edge will be folded inwards then sewn in at the brim. This brim binding style is often seen as stylish. 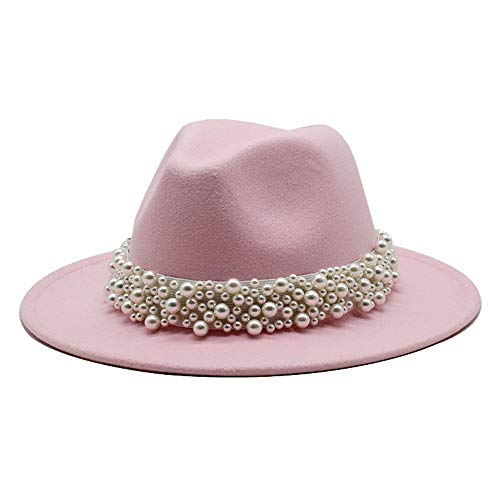 This type of brim has decorative elements since it’s trimmed with ribbon. Some brims even have bows on them, while others have a feather attached to the ribbon or bow.

This is a type of hand-felted edge that is used to make the brim more durable without any sewing. It’s more commonly found in vintage fedoras.

Types of Fedora Hats Based on Style

There’s a fedora hat to suit every occasion, and below we take a look at some more common fedora hat styles.

Formal fedora hats are made for dressy events, and their fine appearance is usually unmistakable. For instance, they tend to have a high surface sheen and a very refined design. A dress hat is commonly made from an upmarket material, such as beaver or wool felt, which has a very fine and soft texture and appearance.

They also regularly feature a brim trimmed with ribbon and a classic center or teardrop dent.

If you need a fedora hat for everyday occasions, then a casual fedora comes highly recommended. This type of hat comes in many different styles in terms of brim length and crown shape, though it’s usually made from materials, such as wool felt, straw, and cloth.

Sometimes, classics never go out of style. For example, you might have seen movie gangsters donning the original fedora hat style, which can still be fashionable even today. The vintage fedora style is timeless and can make you stand out more.

The Safari fedora will forever be associated with Indiana Jones movies, and it, therefore, appeals to all adventure lovers out there. They tend to be similar to straw fedoras because they are light and comfortable, and their brown color makes it possible to pair with a wide range of outfits.

Types of Hats Similar to the Fedora

Many hat types are often referred to as or mistaken for fedora hats but don’t conform to the classic fedora hat description. Some like the trilby hat are, in fact, a type of fedora hat that’s commonly mistaken for a totally different hat! Let’s take a more detailed look at some of these hats:

As mentioned before, the trilby is a type of fedora though many people think otherwise. That’s because while it has the well-known fedora crown shape, the brim tends to be shorter and curled around the edges.

In some instances, the edges of the brim are turned down at the front and turned up at the back (hats with this type of style are also known as snap brims). Additionally, the height of the crown on the trilby is shorter, so it has a smaller hat size. Traditionally. The trilby was commonly worn by rich men, though it has been incorporated into contemporary culture today.

Like the name describes, a porkpie hat actually has a shape similar to the porkpie. This makes its profile appear similar to the fedora though there are some distinct differences on closer inspection. For instance, the pork pie hat has a much shorter brim which is creased and turned up all around.

The crown is also noticeably rounder with straight, slightly slanted sides. Like the fedora, a pork pie hat can be made from all sorts of material, including straw, cotton, and felt. It can also be trimmed with ribbons and feathers.

This type of hat is also nicknamed the Godfather hat since it features in the Godfather movie on none other than Al Pacino’s head. While it’s very similar to the fedora because of its center dent, the crown is taller and more pronounced. Additionally, the brim is stiff, curled up on the edges, and trimmed with a hat band.

Typically, it also has a bow that’s worn on the side. The name is derived from Bad Homburg, a place in Germany where King Edward VII purchased the hat before bringing it back to England, where it soon became a popular style. Overall, the Godfather hat makes for a great men’s fedora hat.

As mentioned earlier, safari fedoras usually function in a more adventurous sense for outdoor lovers. Most people commonly refer to them as simply safari hats, but they’re actually a type of fedora hat. However, they are a type of wide brim fedora that helps protect the wearer’s face from the sun and other elements.

Also, the crown is a bit flatter, and they rarely have center dents. Safari fedoras are normally made from brown, beige, and green colored straw or leather and trimmed with a thin leather band.

Like the trilby, the Panama hat can be a type of fedora. What distinguishes them from other types of fedora hats is the type of material they’re made from. It’s mostly recognizable by its light-colored appearance and finely woven material, which is a very fine type of straw called toquilla straw.

The Panama hat is entirely hand-woven using this straw by craftsmen in Ecuador. It’s known as a men’s hat that’s waterproof, crush-resistant, breathable, and super lightweight, making it a popular and slightly pricier fedora hat option. Besides the Panama fedora hat, Panama hats can also come in other styles, such as the Optimo Panama hat.

Like a safari hat, an outback hat is made more for its function than for appearance’s sake. They have wide brims that tend to dip both at the front and back and are typically made from leather. As the name points out, they originate from the Australian outback, where protection from the sun, wind, and rain is much needed. The outback fedora hat is, therefore, makes for a great sun hat when roaming about outdoors.

Gambler hats are a cross between the outback hat and cowboy hat or western hat. They are also very similar to fedoras, except for the fact that they have a wider brim and a distinctly oval crown. The brim is usually turned up slightly, and the whole hat can be made from wool felt, straw, or leather, with ribbon trimming.