Sip some champagne and adjust your lace gloves as we take a close look at cocktail hats showcasing the rich history, how to wear it properly, how to pair it and where to buy one for yourself.

Some hats are practical: to keep the sun or rain off your face, your head warm, or as part of a uniform. The cocktail hat is simply a beautiful accessory to delight the wearer and bring a smile to those around her.

What is a Cocktail Hat? 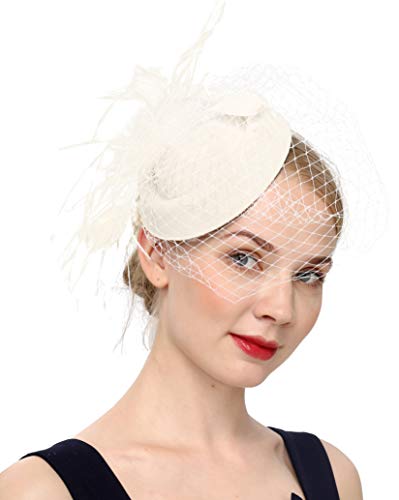 A cocktail hat is a style of women’s hat. These extravagant and gorgeous hats are usually brimless but have a full-formed base of felted wool, straw, or fabric. Cocktail hats are highly decorated with net, beads, flowers, ribbons, jewels, and feathers.

Cocktail hats developed when all women wore hats in public and were designed to be worn in the evening with formal dresses, hence the fancy embellishments. The cocktail party, an evening soiree devoted to drinks and snacks rather than dinner, was associated with these frivolous hats.

Cocktail hats had their heyday between the 1930s and 1960s, although women still wear them for formal events, weddings, and parties.

Is The Cocktail Hat in Fashion? 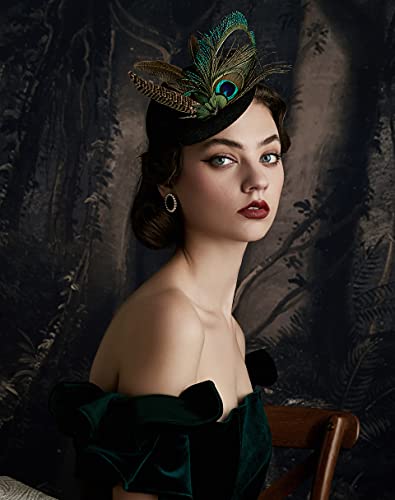 Cocktail hats are a luxury item, ideally worn to weddings, parties, and black-tie events. Because wide-brimmed hats are not evening wear, the cocktail hat is perfect for adding a touch of elegance to an outfit.

Wearing a cocktail hat is no longer limited to the evening, though. An extravagant little hat is perfect for a morning wedding, an art gallery opening, high tea, or a birthday party.

Bear in mind that the cocktail hat is essentially a fun and whimsical item – it’s not appropriate for the office or a funeral.

You’ll often see royals and celebrities donning cocktail hats: they’re a favorite of the Duchess of Cambridge and Empress Michiko of Japan.

What Are The Different Kinds Of Cocktail Hats, And What Are They Made Of?

Cocktail hats come in various styles and shapes, depending on the wearer’s mood and the designer’s imagination. These delightful hats are made from many different materials. 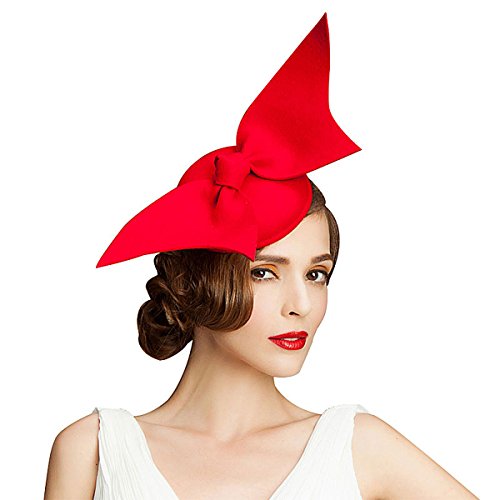 Hats made of felt are more structured and slightly heavier. Felt cocktail hats can look a little dated and look best during the day. 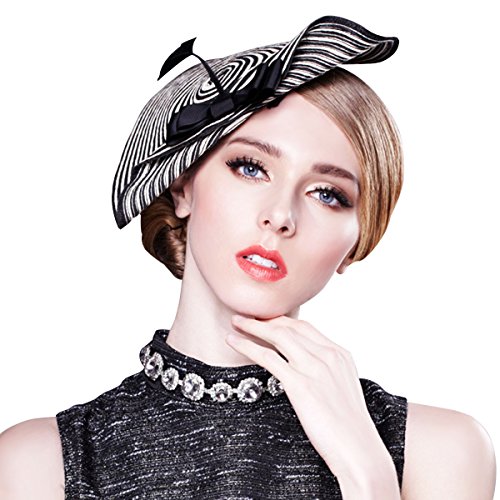 Straw cocktail hats are light and summery and are available in any color – rules of etiquette suggest that your hat matches your dress.

Any hat made of velvet is immediately lush and elegant and suitable for evening wear.

How Do I Wear A Cocktail Hat?

Cocktail hats are generally worn tilted daintily to the right, about a finger’s width above the eyebrow, and secured with a hatpin. They look equally elegant atop a short pixie cut or perched on a magnificent updo, as they don’t cover the whole head and don’t crush the hair.

Pair your cocktail hat with a stunning cocktail dress, a formal suit, or go bohemian with a cocktail hat, velvet jacket, and jeans.

What Can I Wear Instead Of A Cocktail Hat?

If a cocktail hat is a too much hat for you, there are two alternatives. 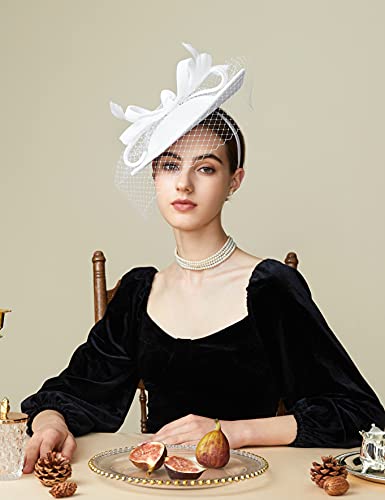 Fascinators are sometimes confused with cocktail hats, as they perch prettily on the side of the head and often have striking embellishments. However, fascinators are not a true hat at all – you secure them to the head with a comb, elastic, or clip, rather like a hairpiece or Alice band.

Fascinators are usually lighter and easier to wear than cocktail hats and can look very striking. England’s Princess Beatrice is a great fan and always looks incredible in her fascinators. 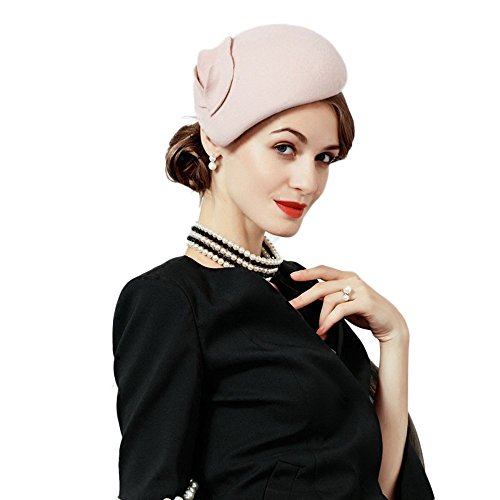 Another alternative to the cocktail hat is a 1950s favorite, the half hat. Half hats were usually worn during the day and were the ideal accessory to show off a lovely hairdo as they cover only the crown and sides of the head.

Evening half hats were also popular and became a crossover item with cocktail hats.

Once the must-have accessory, half hats will give your outfit a fun, vintage vibe.

If a cocktail hat is a little crazy for you, go for the more formal pillbox hat. The fashion icon Jackie Kennedy made these classic hats famous.

The pillbox is also brimless, like the cocktail hat, but is embellished only with a veil. The pillbox’s sides are short and straight, and the top is flat, so the style is understated and elegant.

Pros And Cons Of Cocktail Hats

Wearing a cocktail hat is a matter of style, and you need to decide whether you are bold enough to carry it off.

Pros Of Wearing A Cocktail Hat

Cons Of Wearing A Cocktail Hat

A History Of Cocktail Hats

Up until the 1960s, it was the norm for women to wear hats when they left the house during the day. It wasn’t seen as necessary to wear a hat in the evening.

However, in the 1920s and 1930s, a new social event developed: the cocktail party. The cocktail party was a late afternoon or evening event, semi-formal, but without dinner. This afternoon-evening situation was a hat quandary – ladies wore hats for afternoon tea, but not for a sit-down dinner. What was appropriate?

Origins Of The Cocktail Hat 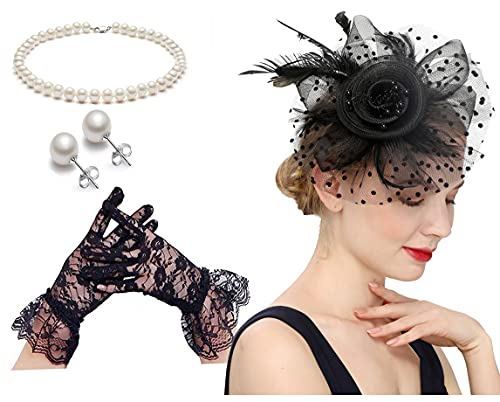 Because daytime hats didn’t look good with the styles women wore to cocktail parties, a new kind of hat was born – the cocktail hat. Cocktail hats could be brimless, as they didn’t need to protect the face from the sun or rain. They were going to match with pretty clothes, so designers could embellish them to match the outfit.

A whole new outfit developed – dresses were short, like day dresses, with sleeves, but in rich fabrics typical of evening clothes, like shantung or brocade. Ladies took to wearing a matching cocktail dress, gloves, hat, and shoes. Although Coco Chanel also designed cocktail dresses, with her signature costume jewelry, the term “cocktail dress” (and later hat) was coined by Christian Dior.

Cocktail hats began appearing in Hollywood movies and soon caught on. The most famous cocktail hat designed in Hollywood was John P. John, with his label known as Mr. John, an American milliner who was as well-known as Christian Dior in the 1940s and 1950s. He designed hats for Vivienne Leigh of Gone With The Wind fame. Mr. John is the official creator of the fascinator, a smaller version of the cocktail hat.

One of the more controversial names in cocktail hat design is Elsa Schiaparelli, whose surreal designs were works of art and conversation starters rather than headgear.

From the 1930s to the 1960s, cocktail hats were the height of popularity, a fun, frivolous accessory to brighten up any evening event.

If you are a real cocktail hat fan, the best place to buy one is at a thrift store or vintage store – genuine cocktail hats from the 1930s and 1950s are absolutely beautiful creations. These unique gems will set you back around $50.

For a really special occasion, like a wedding or charity event, you might want to purchase a cocktail hat from a milliner, who will create a bespoke hat for you. A hat like this will cost upwards of $200.

Searching online will give you many examples of fascinators rather than cocktail hats – you can pick up a cheap fascinator for under $10 for a fun party. Still, a properly made fascinator for an event will cost $50 to $100.