Refill your beer pints and imagine the snowy alps as we take a look at the traditional Bavarian Tyrolean hat, its history, its features, how to properly wear it and its many varieties.

A Tyrolean hat is a well-known traditional hat worn many years ago with traditional costume. It is now a symbol of the countries it was birthed from; it is worn at local festivals and known in the tourist industry.

What is a Tyrolean Hat?

The Tyrolean hat, also known as the Bavarian or Alpine hat, is a traditional German hat that is a distinctive element of the local folk costume called Tracht. This hat originates from Tyrol in the Alps, part of the countries we know now as Austria, Germany, Switzerland, and Italy.

The name of this hat comes from Tyrol, a region in Austria where it was first made. The traditional costumes/ Tracht were designed to get a uniform appearance in the 19th and 20th centuries; this hat has been around since the 1830s and 19840s.

The original hat that we know today varies from the two original styles; the North Tyrol had a relatively tall, narrow-brim, and the hats from the South Tyrol wine country have a small, wider brim. This hat became a symbol of Tyrolean culture and is well known in the tourist industry.

It is well known and often seen at folk gatherings and beer festivals like the Munich Oktoberfest, where folk bands usually dressed up in traditional uniforms. The link between this hat and traditional Alpine folk music was reinforced when Billy Mo wrote a song called ‘I Prefer to Buy a Tyrolean Hat.’

A musical comedy was produced in 1965 with the same name. Edward VIII of Great Britain made this hat well known; after his abdication, he stayed in Austrian Styria, where he often wore this hat. It has been said that thy Tyrolean hat was the inspiration for the homburg hat, which was popularized beyond the German region by Edward VII.

The traditional Tyrolean hat is made of green felt, it has a crown that tapers to a point, and the hat’s brim is the width of one’s hand, which is also common in Zillertal, a Tyrollian valley in Austria. The brims edges are raised on one side, typically the back with the front flattened.

This hat is typically decorated with color-coordinated band or rope around the hat and flowers, pendants, feathers, or ‘brush’ on the side of the crown. The brush, also known as the ‘Gamsbart,’ can sit on the side and the top of the hat’s crown, and it comes in different sizes.

This is made of chamois goatsbeard, the hair is tied at the bottom, allowing the top to fall in a brush-like fashion, and it may sometimes be combined with feathers. A Gamsbart originated in the 15th century; it was first a tuft of hair bound to a hunting hat. Wearing a regional costume and Tracht became more popular in the 18th century as it made everyone feel united.

As the years went by, the Gamsbart became more elaborate and bigger to keep up with the desire to look good; the big plummy Gamsbart formed part of the Bavarian Tracht. There are three main aspects to note about the Gamsbart:

How To Wear A Tyrolean Hat?

When going to a traditional German festival like the Oktoberfest and planning to dress the part, it is important to note that the hat is mandatory. This hat is mainly worn by men and will help you look like a true Bavarian. If you are off to a festival, it is a great chance to join everyone and wear the right clothing to fit the occasion.

You can style the Tyrolean hat with shorts or jeans, a buttoned-up smart shirt, and suspenders. If you are not planning on wearing the whole outfit and would like to accessorize with the hat, you could pair it with jeans or cordials, a shirt, jacket, and sneakers.

Oktoberfesthaus has a few different Alpine hat designs making it easy to match them to your outfit. This can be helpful as you can find one that is more your style and maybe more fitting for the occasion. 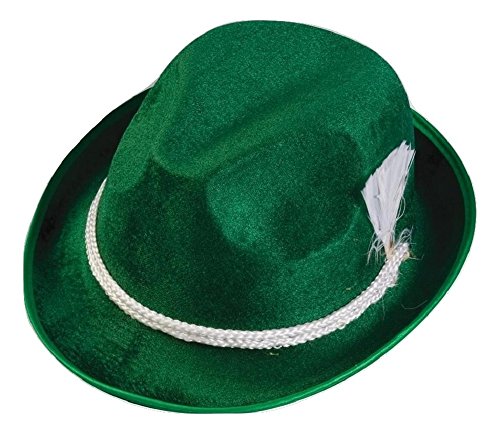 This bright green-colored hat can suit those who love to add a stand-out color to their outfit. This plastic-backed hat is great for those on a tight budget attending Oktoberfest, and it is one-size-fits-all. It is decorated with a band with the Bavarian flag colors, blue and white, which holds down a white feather.

This hat is made of cotton and is one of the trendiest German Alpine hats, which is affordable. It is accessorized with three bands with the German flag colors, black, red, and orange. It will be easier to find the right size for you as it comes in three sizes.

This hat will help you look like a true Bavarian; it will help you gain respect at an Oktoberfest while honoring European heritage. This hat comes in three sizes; it is made from 100% wool and is either red or green, and is accessorized with braided feathers around its brim.

This woolen cap shows that you are ready to have fun with dancing, yodeling, and anything else. This hat is decorated with three ropes with the colors of the German flag that are intertwined with a feather to ensure you are being a true Alpine. 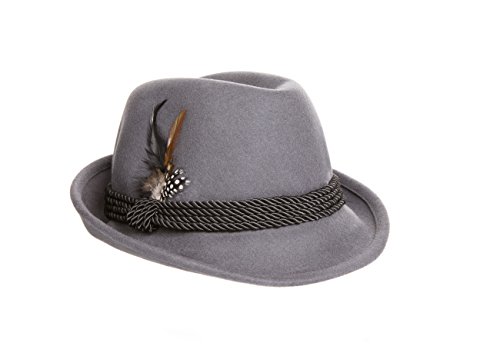 This styled hat originated in Austria, which had a similar Trachy style to the Germans. This hat is a lighter grey color and made from 100% wool making it better during the hotter seasons. It is decorated with a green braid and a large red feather.