Let us take a close look at the umbrella hat and showcase its advantages and disadvantages, it various types, how to wear them, who invented them and where to to buy umbrella hats.

Why bother with carrying an umbrella around when you can wear it on your head? The umbrella hat is mostly considered to be a novelty item but can actually be very practical. It can protect you from the sun and the rain and is very convenient if you don’t have any free hands for all your carry-ons, especially if you’re running late on a rainy day.

It may not be the most fashionable choice, but functionality tops fashion any day when there’s a heavy downpour outside.

What is an umbrella hat? 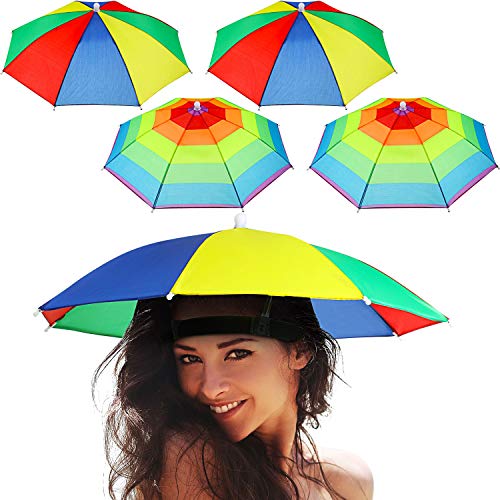 The umbrella hat is the hands-free version of a normal umbrella, allowing you to text or navigate in the rain without worrying about carrying it around. It is basically an umbrella (without the stick) strapped to your head. A lightweight umbrella canopy is attached to an adjustable headband that sometimes looks like a baseball cap and is worn on the head like a hat.

It has been nicknamed the Brockabrella after Lou Brock, an American baseball player who popularized the concept. Umbrella hats come in different sizes and many fun colors, and both children and adults can wear them. If they’re worn as novelty items, they tend to be smaller with no real practicality since they’re just for show.

But some umbrella hats are as big as normal umbrellas (up to 36 inches in diameter) and give a good amount of protection against the weather. These larger ones usually have straps that fasten under the chin.

Umbrella hats can be folded just like a normal umbrella but take up much less space since they don’t have a long stick attached to them. So if you don’t need to wear it, you can simply keep it in your handbag or backpack. No more forgetting umbrellas on busses and trains. Who knew carrying around an umbrella could be so easy and hassle-free?

Although umbrella hats aren’t the most popular type of hats, there are a few eccentrics who don’t mind wearing an umbrella on their head in public. Today, it is mostly seen as a cheap and comical novelty item worn for its uniqueness. Don’t expect to see people wear it when they go to the mall.

The umbrella hat can be worn as protection against the sun when you go to the beach or when you’re working in the garden. When you think about it, it’s also a great accessory to have when you go camping since it’s so easy to carry. It is also ideal for hiking, where you need to be shielded from sun or rain without carrying extra baggage up the mountain.

We can see that there are many great reasons to be wearing an umbrella hat. However, because it’s so different and a somewhat strange concept, very few people have the boldness to wear it.

Even though you won’t see it often, this hat type isn’t entirely out of style. But if you want to wear it in public, you have to have a good reason for doing so. I think we can agree that when there is a raging thunderstorm outside, this hat will definitely be in style for that moment!

Umbrella hats all have the same basic structure, but some can have a few unique features that make them different from others. Let’s look at a few variations: 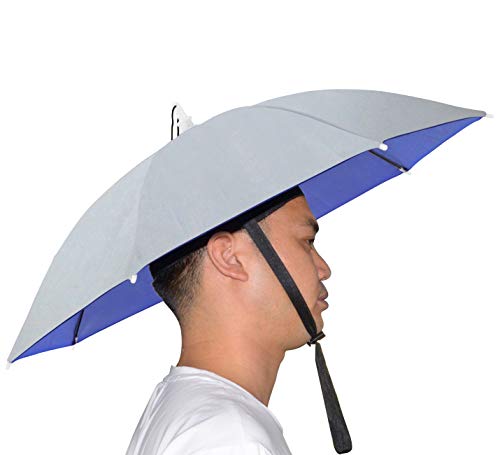 Instead of a rounded brim, this umbrella hat has a flat, horizontal brim. The silver color reflects UV rays and helps keep the wearer cool and protected from the sun. 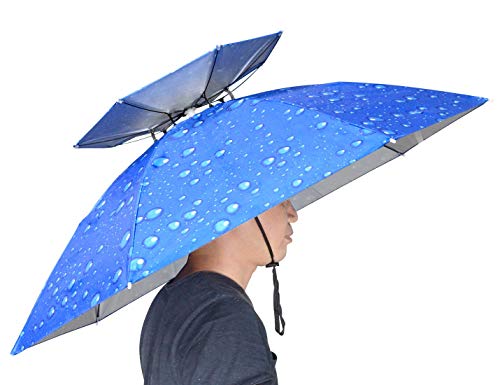 This umbrella has a canopy made up of two layers made with light-reflecting cloth for protection against the sun’s heat. One of the layers acts as a vent when opened and seals against rain and wind when closed.

The rainbow umbrella hat can be worn by adults and children, male or female. This colorful hat is great for the beach or a party where you want to have fun without worrying about sunburn. 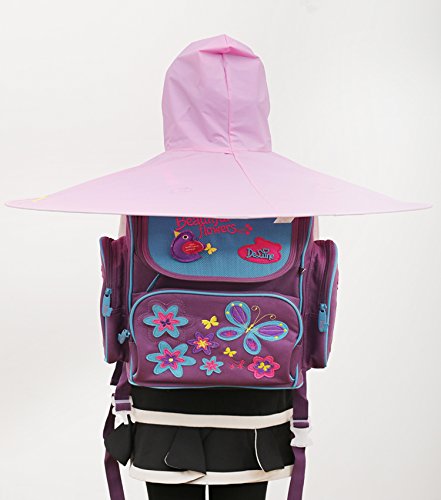 These umbrella hats come with a hood attached to a shoulder-level disc and elastic, anti-tear material that acts as extra protection from the rain. This one is especially great for kids and ensures their whole body is covered and protected from the elements.

How does an umbrella hat work?

Umbrella hats are very easy to operate. They click open like an umbrella, and some of them have a rope at the top that helps you pull it open. Certain types have a headband that sits tightly around the head to secure the hat in place, while others may look like a normal baseball cap.

If there are head straps, you should clip or tie them under the chin to ensure your hat stays safely in place. Sometimes these straps are adjustable to make sure you get the perfect fit.

Pros and cons of umbrella hats

Who invented the umbrella hat?

The umbrella was invented in December 1880 by Robert W. Patten, famously dubbed as the Umbrella Man, when he moved to Seattle in the 1890s. He invented the umbrella hat while he was traveling through Mexico for work. He even took a patent out on his eccentric hat idea.

Originally, the hat wasn’t just an umbrella canopy that protected one against the sun or the rain but also had a mosquito net attached to it for protection against pesky insects.

Although the invention grabbed attention for a while, it never gained traction as a fashion piece. However, it did make a quick comeback in the mid-20th century when Lou Brock wore an umbrella hat before a football game in St. Louis.

The umbrella hat was named after him and became famous as the Brockabrella. The Cardinals gave 25000 replicas away to baseball fans as a promotional item.

Though you would expect the umbrella hat to become popular after that event, it, unfortunately, didn’t.

How much does an umbrella hat cost?

The pricing of an umbrella hat can vary and depends on the variation and the material it’s made of. A single umbrella hat usually costs anything between $7 and $10. It usually comes sold in packs which can range in cost from $12 up to $25.

Where to buy an umbrella hat 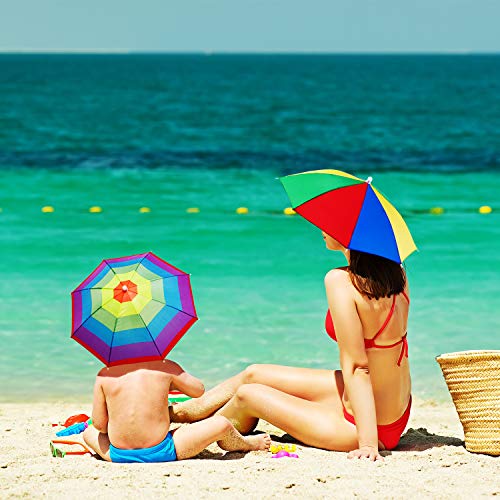 Umbrella hats are very easy to find online, and there are many different sizes and colors to choose from. Some of them even have vents to keep you cool on a very warm day! Below are a few places where you can get your hands on a hands-free umbrella hat:

How to make your own umbrella hat

If you’re in the mood for a fun DIY project that you can put to good use afterward, then follow these steps to make your umbrella hat: