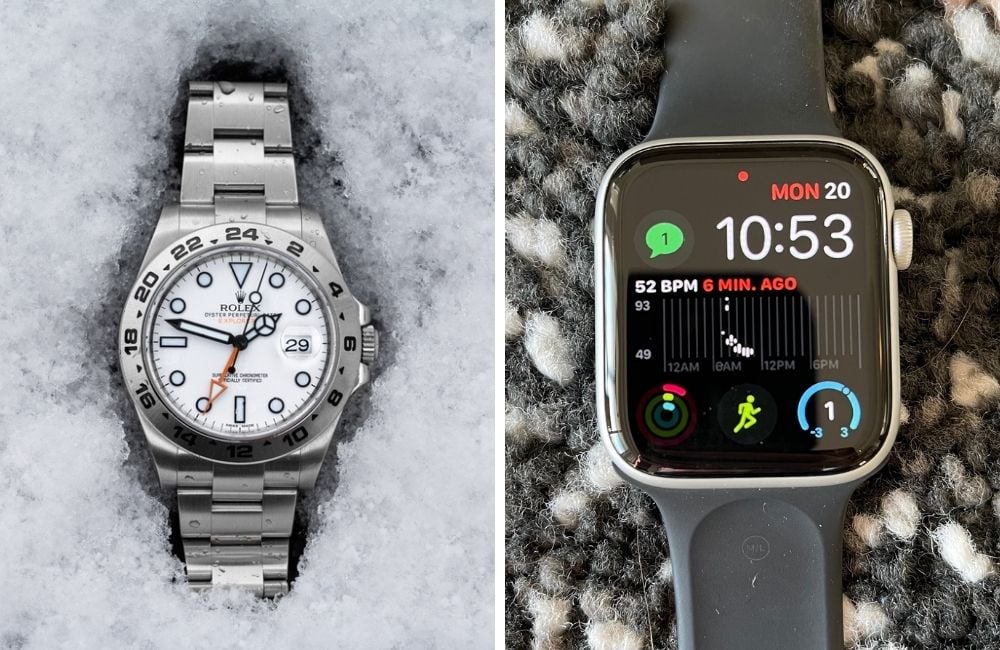 I’ve been tempted many times to splurge on another luxury watch.  There are so many great options out there but when it comes down to it, I LOVE the functionality of my Apple Watch.  I hate to say it but I side with function over form with my choice of watch.

I say the above being self-employed. I don’t have to impress clients. I don’t have to impress bosses. I work solo so I do not need to make any sort of statement with my watch.  If I worked in a corporate setting and was climbing the corporate ladder, I would definitely opt for a luxury watch.  It would be a no-brainer.  I’d wear my Apple Watch outside of work but at work and at work functions (unless a casual event) I would wear a luxury watch. In fact, in a previous life, I was a lawyer and I did invest in my appearance.  Had I continued with law I would have invested a significant amount of money each year into constantly improving my wardrobe which would include at least one but probably several luxury watches.

Related: Is it okay to wear both a regular watch and fitness tracker at the same time?

If you need to dress well for work, invest in a luxury watch

People notice.  It’s the same with shoes, shirts and suits. Even if you aren’t making the big C-suite bucks yet, you need to dress as if you belong.  It’s an investment into your future.  You don’t need to spend $50K but you should spend a few thousand dollars on a great watch plus at least $10K to $15K on suits, shoes and coat.  Less is more. You’re better off having 5 suits each costing $1,500 than 10 suits costing $750 each.  Same with shoes.  Same with your watch.

Is the Apple Watch acceptable in an office work environment?

Yes, it is but it won’t do yourself any style favors.  You hopefully wouldn’t get fired for wearing such a watch in the office but if you work in an environment that demands formal business attire, part of that attire should include an impressive luxury watch.  I know it sounds nuts but we live in a largely superficial world where some of the powers-that-be care about this stuff.  But that’s not all.  A subordinate’s investment in a luxury watch signals dedication and commitment to the job.  It tells superiors that they’re taking the position, advancement and the company seriously.  This is especially the case if you work with clients such as in law, banking, finance and/or consulting.  Bosses want to be proud of the subordinates who represent the firm and part of that is looking the part.  I’m talking as a person who had a former career in law so I speak from experience.

What if you work from home… should you invest in a luxury watch?

Yes, if you dress up for Zoom meetings and conference calls, you should still wear a luxury watch.  I know it’s tough pill to swallow, after all there’s probably a lot of other things you’d rather drop a few thousand dollars on, but investing in attire is investing in your future. If you aren’t climbing the corporate ladder, don’t bother.  Wear what’s necessary and that’s it.  But if you’re gunning for the C-suite, you need to dress and act like it.  I know I certainly would.  I’d put a lot of money into my suits, watch and shoes because people notice.  They really do.

What about outings and parties?

This is definitely another consideration and it depends on where you go for outings and the type of parties you attend.  It’s never comfortable being underdressed at any event.  It’s better to be overdressed.  Granted society is more casual these days but if you do attend formal wear events, outings and parties, you definitely need to invest in a luxury watch.  An Apple Watch will not do as part of formal wear outfit.

Not required in every industry

The fact of the matter is many industries are more casual than they were 50 years ago.  Long gone is the Mad Men era when employees were expected to dress well in pretty much every industry.  Take the tech industry as an example. Tech executives are notorious for dressing casual and it’s widely accepted for employees to dress casually. In fact, if in the tech industry, wearing a smartwatch might be an advantage given it is the tech industry after all.

It doesn’t mean you can’t have an Apple Watch

I’m the first to admit that the Apple Watch (and other smartwatches) are amazing, convenient and ironically, can help with work.  I appreciate the text and email notifications.  I’ve often taken calls on my Apple Watch.  All-in-all, it’s actually a very good piece of technology for the office.  But that line of thinking is exactly what could hold you back from advancement.  If you’re running the show, you’re not dealing with work-related emails and text notifications. You have staff who filter that stuff for you; same with telephone calls.  When that’s the case, an Apple Watch would be more of a distraction than a convenience.

Style aside, what’s a better watch – Apple or a luxury watch?

It depends what you consider to be important features of a watch. I’ve already established that when it comes to style in many formal settings, a luxury watch wins hands-down.

However, if you’re like me and you appreciate the tech features of an Apple Watch, you’ll enjoy wearing an Apple watch more than a luxury timepiece that only tells time.  Both tell time just fine but the Apple Watch does so much more.   I love the fitness features since I do some form of exercise daily.  I also like that I can check the weather forecast, control music streaming, see my heart rate and so much more.  It’s really a fun watch to wear.  I miss it when I don’t wear it.  So from a functional point of view, the Apple Watch wins hands-down.

When it comes to how long a watch will last, a luxury watch wins by a landslide. I’m on my third Apple Watch.  It’s not because I need to have the latest Apple Watch but it’s because the first two broke. They are not built for lasting.  A luxury timepiece can (and should) last for decades.  In this regard, a luxury watch obliterates pretty much a smartwatch. Moreover, smartwatch tech is changing so quickly that even if your Apple Watch doesn’t break, it will be obsolete in due course.  A luxury watch will never be obsolete.  The older it is, the finer it is (arguably).

The only thing I loathe about smartwatches and the Apple Watch is included in this complaint is the daily need for charging it.  I’m getting mighty sick and tired of charging stuff and remembering to charge stuff.  This isn’t an issue with a luxury watch.

Which smartwatch is best-suited for formal events?

If buying a luxury watch, does it have to be a Rolex?

Not at all.  There are many great, recognizable luxury watch brands to choose from. I particularly like Tag Heuer which isn’t as pricey as Rolex but still recognizable and a quality watch maker.