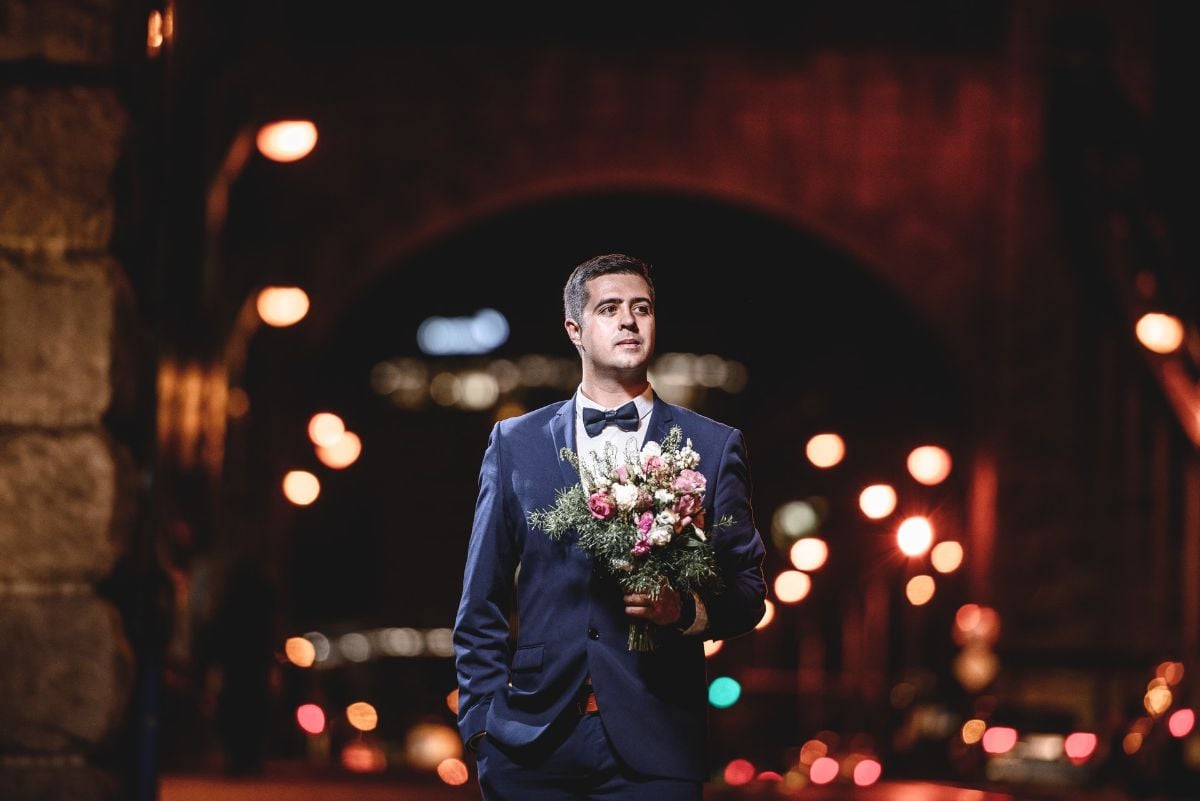 The tuxedo is a classic outfit in men’s fashion and it is truly universal. Men of all ages and backgrounds have worn tuxedos for formal events. They are worn to celebrate the biggest life celebrations, times you need to look your best. So you want to look your best when you’re wearing one. Can you wear a belt with a tuxedo? Should you? What type of belt is best?

History of the Tuxedo

The tuxedo or tux is often jokingly called a penguin suit, though this isn’t necessarily incorrect. The simple black and white design, the classic look that most people associate with tuxedos, does resemble a penguin. Modern tuxes, however, are made in navy, shades of gray and other neutral tones. However, black is still a classic and it’s still the first choice and go-to option when dressing for a black tie event. But when did every single man all over the world decide to wear a tuxedo for all formal events? Where the heck did this tradition start and why are men still wearing the tuxedo today? 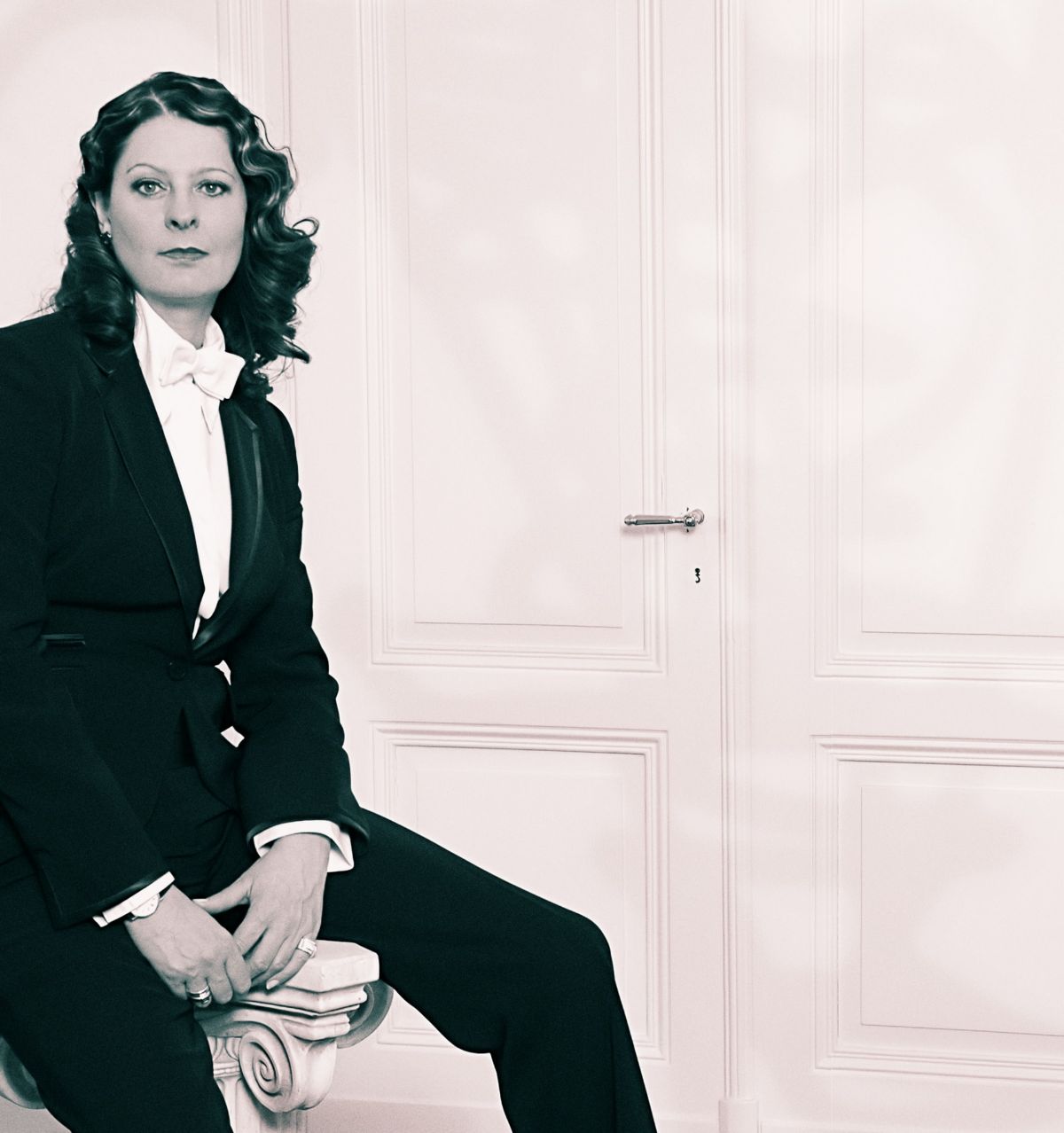 According to fashion legend, the first-ever tuxedo was designed in England in the 1860s by a man named Henry Poole. He didn’t design the tux for himself. Henry Poole create the tux for the then-Prince of Wales, the man who was destined to inherit England’s throne, who would go on to become King Edward VII. And when it was designed, the tuxedo wasn’t formal wear. Actually, it was quite casual compared to the dressy evening formal attire of the times.

However…that story is debated. Others say that it was an American who invented the tuxedo, a man named Griswold Lorillard. He was a society gent and the son of a wealthy real estate mogul who made the bold decision to go out one evening wearing a jacket with no tails. The look first shocked, then stunned. Soon, everyone wanted to have it.

Back then, evening wear was a white tie, a white vest and a tailcoat and pants to finish off the look. The tuxedo, by contrast, was hardly worth being called dressed at all because it was so much less formal. Poole designed the first tuxedo as a tailless silk smoking jacket with matching pants. 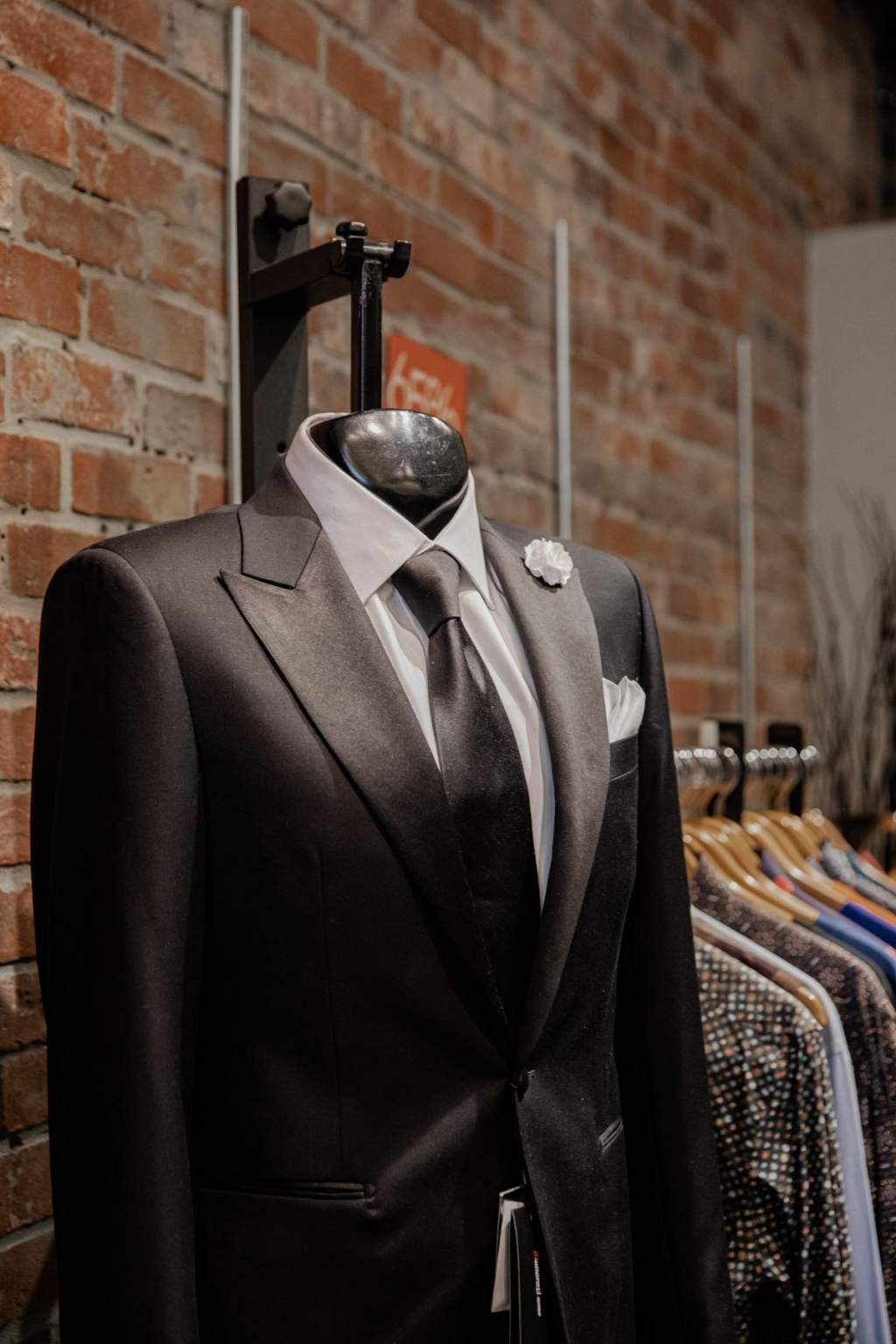 It was going to be a hit…just not right then. The tuxedo would hang around for about two decades before anybody really noticed that it existed. That finally happened in 1885, when the Prince of Wales made a public appearance wearing the tux. Suddenly, everyone was interested.

James Brown Potter was an American who was in the UK at the time of the Prince’s appearance. He loved the tuxedo suit and brought the idea with him back to his home in the U.S. Potter lived in a neighborhood called Tuxedo Park. He wore the suit to the Tuxedo Club Autumn Ball in 1886. That is the exact date when the tuxedo got its name and got noticed by Americans. Men began cutting the tails right off their coats and began wearing this style instead.

According to the other version of the story, tuxedo inventor Griswold Lorillard was the son of the founder of Tuxedo Park. This is how Tuxedo Park ties into this version of events.

It was just a passing fad and like so many other things, the tuxedo just about disappeared during World War I. The tuxedo fell back out of fashion and by the 1930s, hardly anyone was wearing the tux anymore. But because one person did, the tux became incredibly popular again. This time, it wasn’t a prince or a fancy-pants dude from a swanky neighborhood. It was a sexy movie star…and she was a female.

It was Marlene Dietrich who got everyone to see the tuxedo in a whole new way. It was during her film “Morocco,” which was released in 1930, that she made waves in the fashion world. In the movie, Dietrich wore a tuxedo and scandalized filmgoers everywhere. She was so ahead of her time, a woman’s tuxedo didn’t appear in pop culture again for 30 years. In 1966, designer Yves Saint Laurent created Le Smoking, a tuxedo exclusively for women. 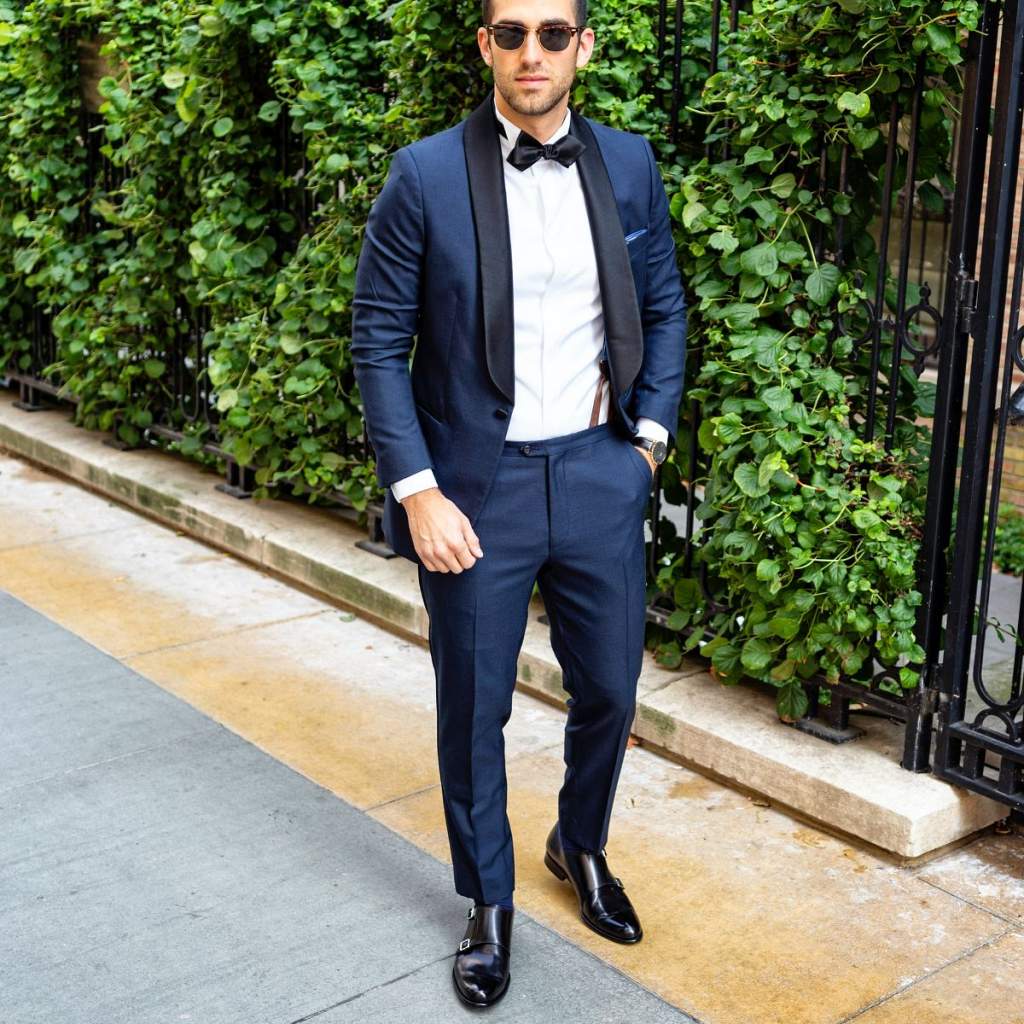 When a woman, Nan Kempner, tried to wear the outfit in 1968 into a New York City restaurant, they would not let her into the building. Kempner, a well-known New York socialite, took off her pants and walked into the restaurant wearing just the jacket and shirt.

Either way, the tuxedo has become popular in the U.S. again as the de facto choice for all men who needed to dress formally. In 1935, navy blue tuxedos were even more popular than black. Other variations followed. White tuxedo jackets became popular and the double-breasted tuxedo jacket appeared on the style scene, giving men some different options. 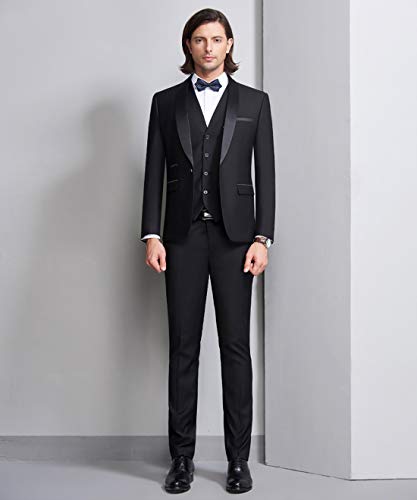 In the 1950s, the “Space Age” was born. Brand-new textiles entered the marketplace and suddenly, tuxedos could be made from synthetic materials like polyester. Tuxedo shirts got a little fancier as a result, not decorated with ruffles. Jackets got ta little more streamlined, shorter and better-fitting. 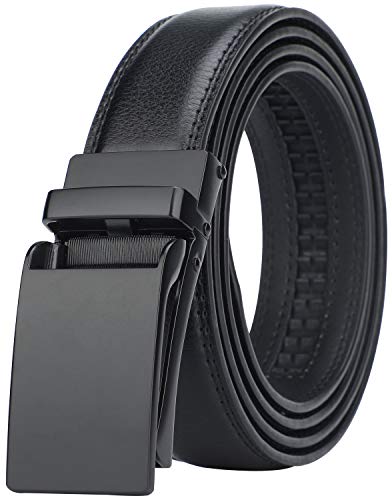 From there, tuxedo style went to all sorts of places. Today’s tuxedos may be colorful or conservative, minimalist or all the way to the max. And it all seems pretty simple. There’s a tuxedo shirt, tuxedo shoes and the tuxedo itself. Except…should you wear a belt?

Can You Wear a Belt with a Tuxedo?

When you’re trying to decide whether or not you should wear a belt, there’s actually a super easy way to know the answer. Take a good look at the tuxedo pants you’re going to wear. Do they have belt loops? Style experts say that if your pants have belt loops, you must wear a belt. Most tuxedo pants will not have them because tuxedos are meant to be tailored perfectly to your body, creating clean, straight lines. Belts can interrupt this line and create bulk around the waist. However, dress belts are designed to be slim and sleek so in tuxedos that have belt loops, you can wear one and maintain a tailored look. 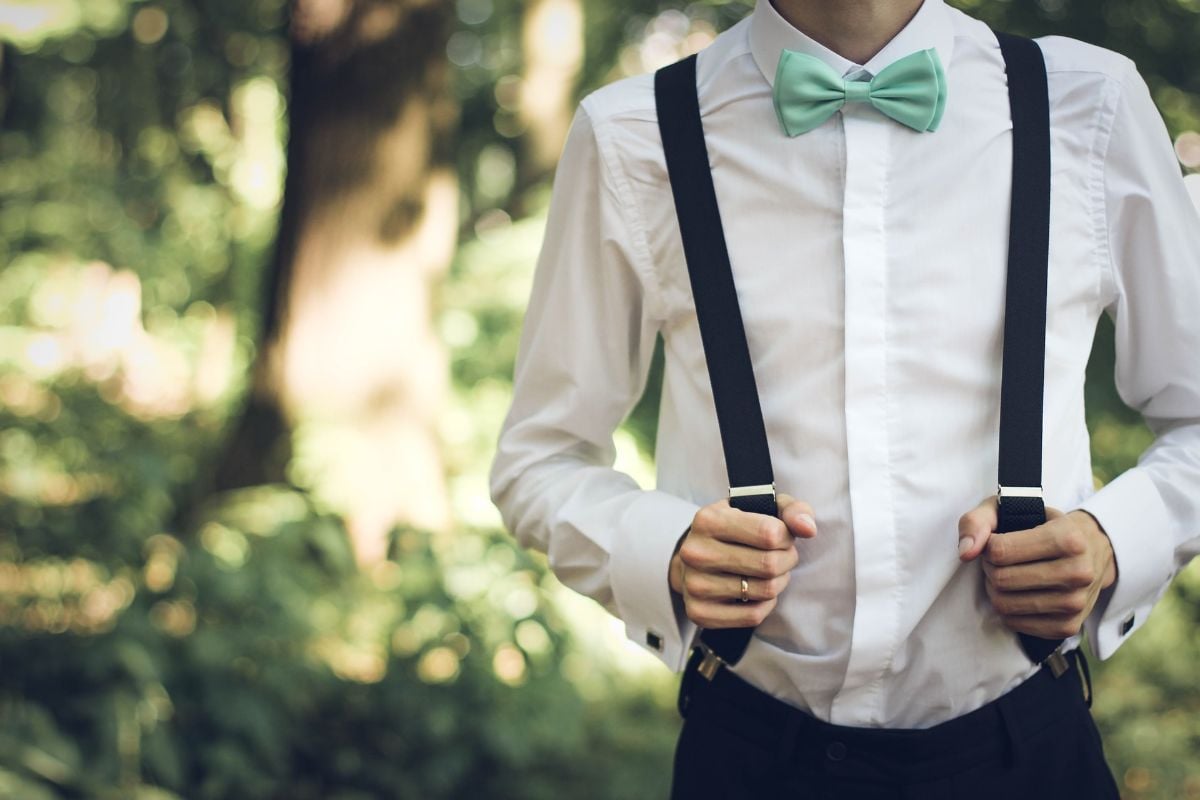 If you ask many stylists, however, they will tell you there’s only one answer to this question: no. There are many who say you just can’t wear a belt with a tuxedo because tuxedos are made to fit perfectly everywhere, so a belt is not needed. You can always use suspenders to keep your pants n place and add a touch of flair to your look. Traditionally, tuxedos are worn without belts. Some newer styles may have belt loops. When that happens, choose a slim, sleek dress belt that will sit flat against your body.

The story of tuxedos is a little twisted and somewhat strange. Tuxedos have gone through lots of changes and it’s difficult to know what’ sin style at any given moment and what is not. So if you still have questions about tuxedos, that makes sense. Get the answer to the most commonly asked questions about tuxedos and wearing belts with tuxedos and become an expert on tuxedo style.

When would you wear a tuxedo?

Tuxedos are worn to the most formal events. Holywood actors wear them on the red carpet at award shows like the Oscars. People who don’t star in blockbusters wear tuxedos for weddings, to the prom and to black tie and formal evening events. Tuxedos are worn only after sundown, never during the day.

How should tuxedo pants fit?

Tuxedo pants are distinct for the strip of ribbon you will find running down each leg. The ribbon covers the seams of the pants and the ribbon is made with the same material as the lapels. Tuxedo pants usually sit high on the waist, above the belly button. This allows another piece of the outfit, such as a vest or a cummerbund, to fit properly and cover the waistline of the pants completely.

Tuxedo pants have no cuffs and end at the ankles. Some have pleats, some do not. Either way, the pants hang straight down from the waist. the waistline itself should fit around your waist well, fitting without gapping or bunching. There should be enough room to move but not enough room to create a loose fit.

Formal belts are narrow in width, usually around 1 1/2 inches. Choose something in high-quality leather, black or brown, with a minimalist buckle.

Art of Manliness – A Man’s Guide to Black Tie: How To Wear A Tuxedo

Bespoke Post – Should You Wear a Belt with a Suit?

CR Fashionbook – The History of the Tuxedo

Suits Expert – How to Wear a Men’s Belt