A part of me loves this ostentatious design. It's different and is definitely a unique smartwatch. Read this extensive review with photos and video demo. 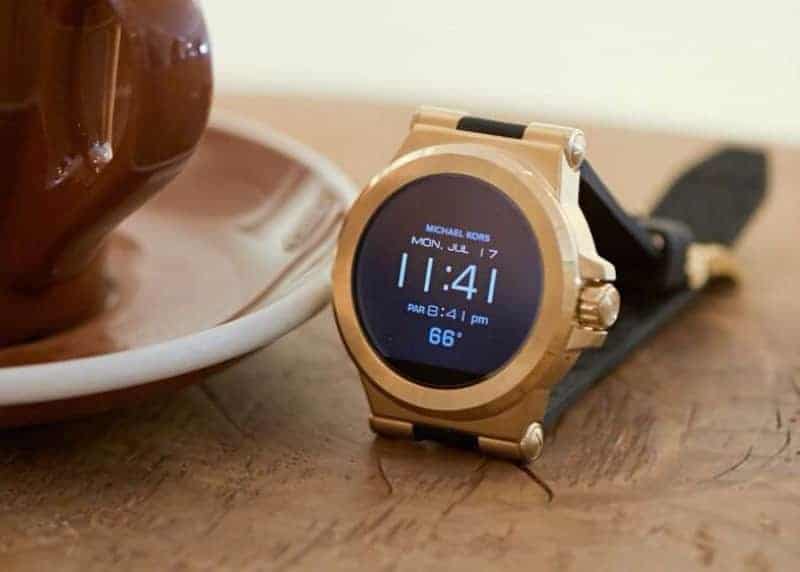 I have to tell you that I’m still on the fence about this watch.

The glitzy side of me, which comes out now and then loves this design.  It’s striking.  It’s big, gold and ostentatious.

The more down-to-earth side of me isn’t wild about it.

Overall I’m really happy I own this watch because it’s different.  When you look at the other style-oriented smartwatches such as the Samsung Gear S3 Classic and Fossil Q smartwatches, they look much the same.  This one is different.

Now on to the review.

Things To Consider Before Buying A Michael Kors Access Smartwatch

You want a smartwatch. After all, it’s a sign of the times, isn’t it? You try to keep up with technology, but you’re not such a tech geek that you need a watch that rivals your laptop. Plus, you prefer to show off your sense of style more than your technical prowess.

If that sounds like you, the Michael Kors Access might look great on your wrist. This watch is notable for its style. It’s made by Michael Kors, not Apple. Its branding shows.

It’s one of the best-looking smartwatches, but its features aren’t all that showstopping.

The display isn’t as vibrant as what you can find in other watches. The battery life is disappointing. The performance is glitchy. It doesn’t have a heart-rate monitor.

Still, Google’s Android Wear platform offers a great deal of versatility. Plus, researchers are finding that wearable technology doesn’t necessarily help you lose weight anyway. The lack of a heart rate monitor might not make a difference in your life.

Also, Michael Kors doesn’t compromise when it comes to quality. This first-rate watch is durable and has the feel of a classic timepiece.

If you’re looking for standout features on the technical side of things, you might want to consider a smartwatch that isn’t designed mainly for style. Here are some reviews of other smartwatches that you might like. However, if you’re looking to upgrade your analog watch with something that’s designed for the times, this is a great option.

Michael Kors is a well-known fashion label with a major presence. The brand prides itself on offering a customizable smartwatch that can be personalized down to the last detail. Two models, the Bradshaw and the Dylan offer a lot of versatility in styling. You can interchange the bands, choosing from metal, leather, and silicone to get fancy or go casual.

At $350, this watch is more expensive than other basic smartwatches. However, you’re paying for the Michael Kors name and exceptional design and quality.

Is the Michael Kors Access worth it? If you’re looking for something rugged that can stay on your wrist whether you’re hiking a mountain or jumping in the shower, this may not be the watch for you. There’s no heart rate sensor, so activity tracking is limited.

The timepiece is slightly water-resistant. However, it’s designed to withstand splashes, not being submerged.

Other than using Michael Kors’s customizable watch faces, this watch’s technology is identical to other Android Wear smartwatches. If you buy this watch, you’re purchasing a straight-up style. 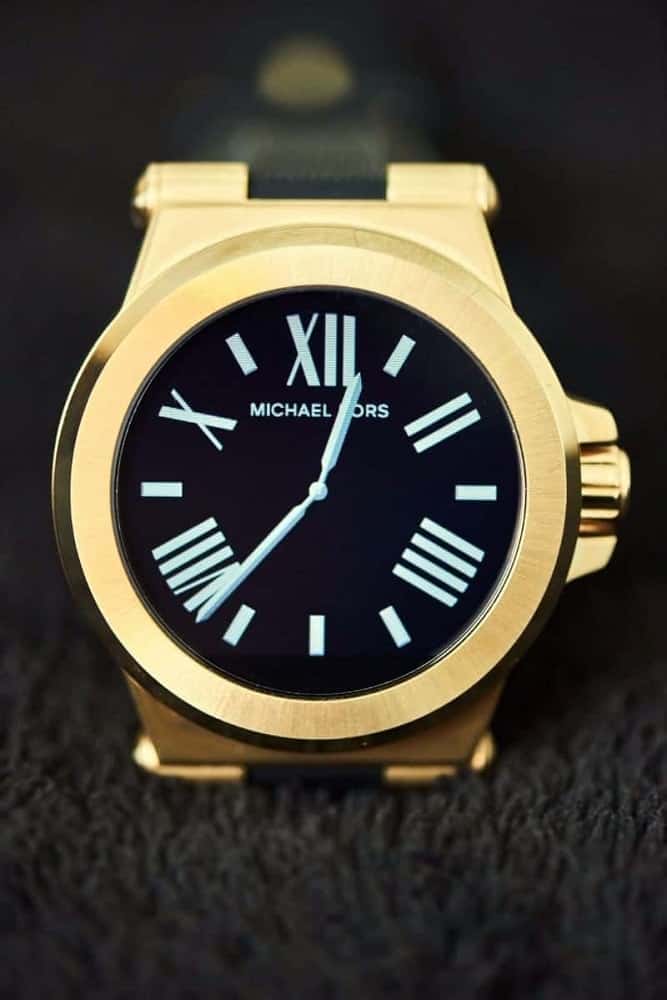 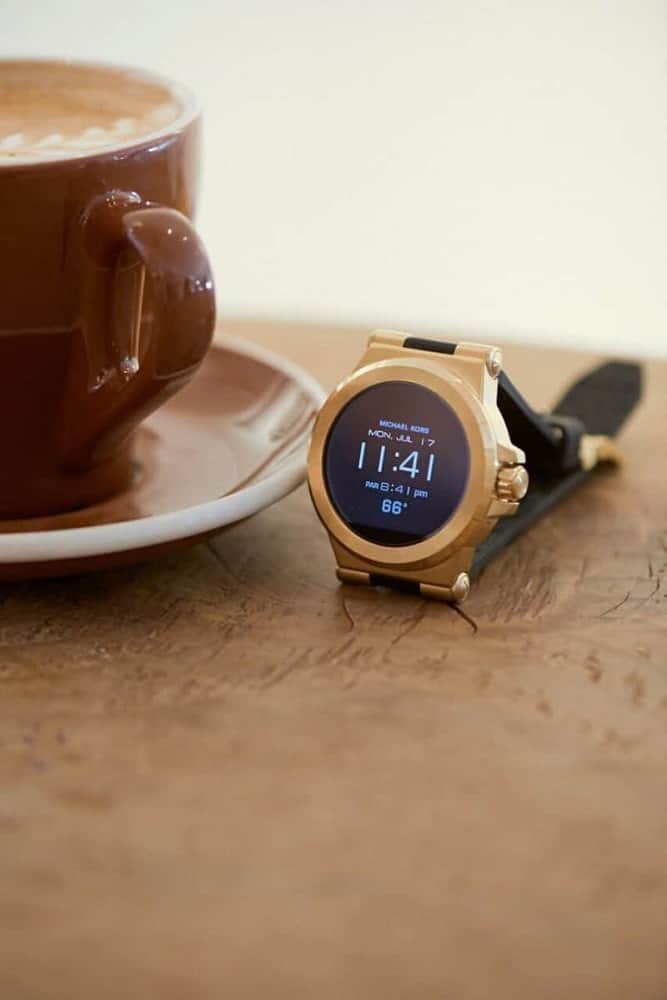 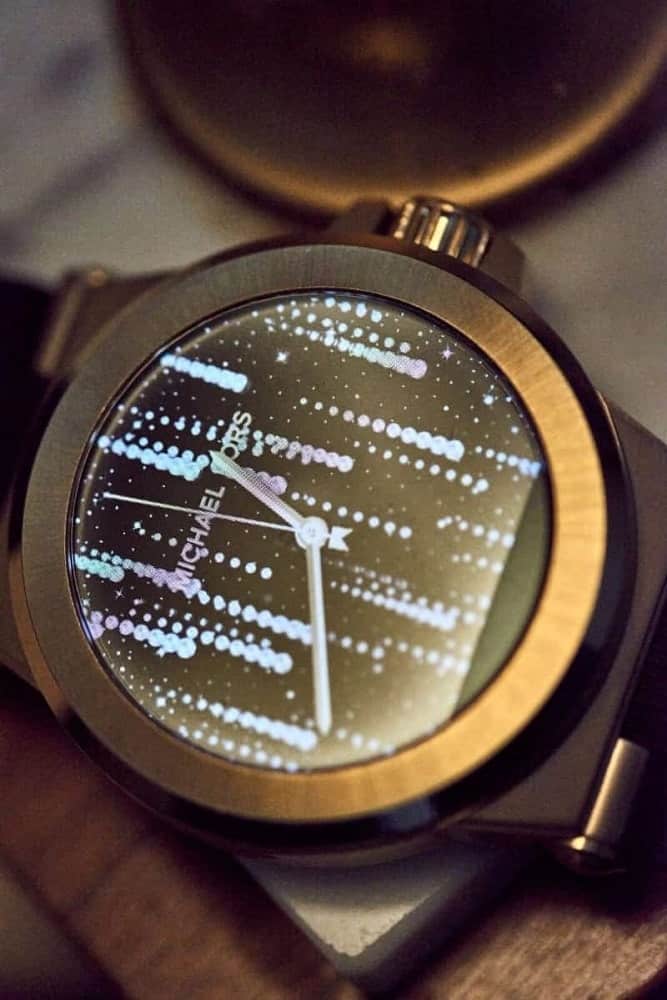 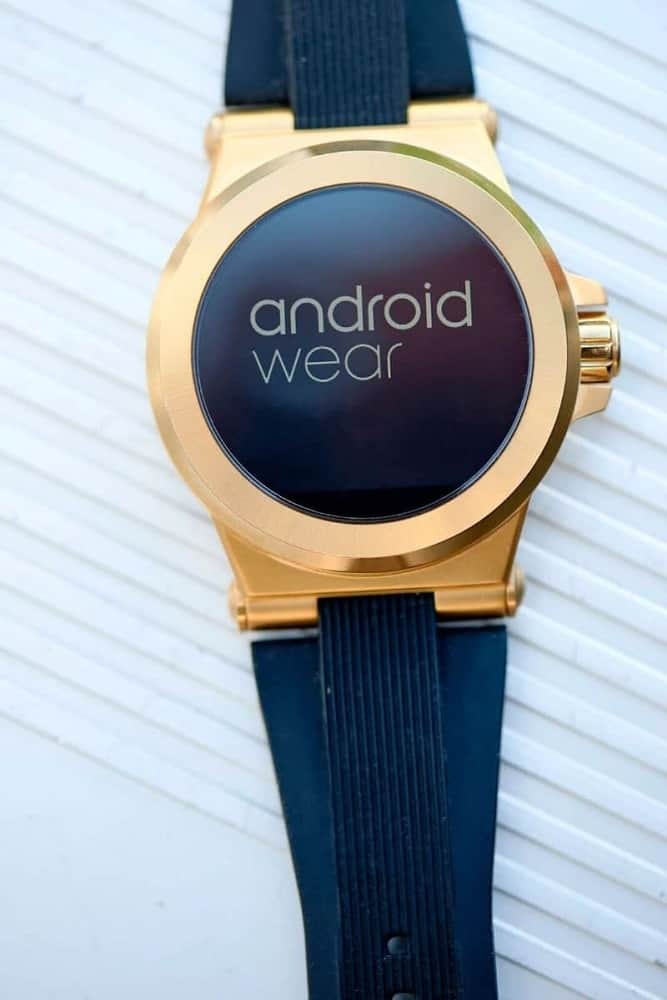 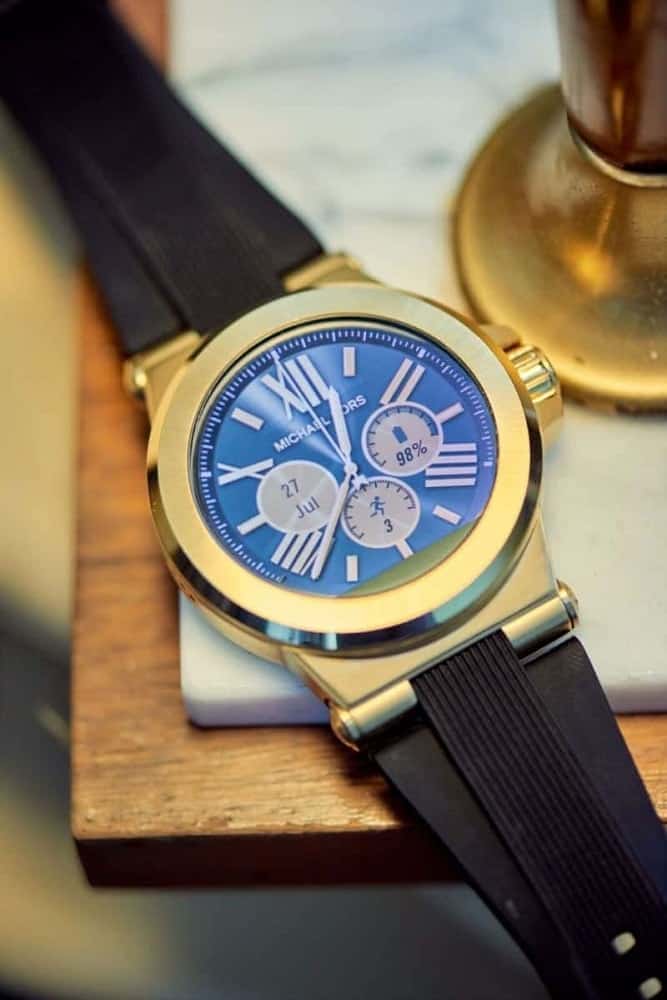 Michael Kors already had the Bradshaw and Dylan timepieces available as analog watches. The hardware is tried and true. It’s been around for a while.

The designer had to make the smartwatch bigger than its analog version in order to give it more battery and processing power. At 44.5 millimeters for the Bradshaw and 46 millimeters for the Dylan, these watches are on the larger size for everyday style.

The case is thick, and the watch feels heavy. However, the sturdy bands hold it onto your wrist comfortably. It feels balanced once you have it on.

Also, the large watch face allows for a spacious display. You have enough room to actually use Android Wear’s large variety of apps without squinting or hitting the wrong thing.

On the Bradshaw, the beveled bezel falls away from the eye and creates a sleeker look. Dylan’s case has a flat front and a wider bezel for a sportier look.

You can mix and match bands, and you can customize the watch display. That makes it go from day to night easily. You can wear it to the office or dress it up for a special event.

However, the Bradshaw can be considered the more elegant model. The stainless-steel band is only available with this version. There are also options for solid, embossed, and patterned leather bands.

The Dylan comes with a silicone band. You can trade that out for a few nylon and leather straps, but there is no option for a metal band.

The company does make silicone bands that don’t look too sporty or juvenile. You can wear this watch to work out if it’s the only one you have or you don’t want to switch to a different gym watch every day.

It’s just not the most rugged option for activity tracking or resisting moisture. In other words, you might not want to sweat in this good-looking timepiece.

I talk more about customizing the watch display in the Software section of this review. However, I wanted to address the look of the watch face here.

Although Michael Kors has some really eye-catching watch faces, they’re not as vivid as those on other watches. I found them a little blurry. If I looked at them at an angle, they became washed out. That brought the show-off appeal of this watch down a notch.

You can personalize every aspect of the watch face. Change the colors of the dial, crystal, and background. Some options let you save useful, at-a-glance information, like the time in a different zone or the temperature, on the watch face.

The Michael Kors Access app also lets you choose a different watch face for day and night. It will automatically change at a pre-selected time. This is a fun feature that makes your watch feel like a novelty twice a day.

Other than that, the Android Wear operating system lets you do everything else. You can add different apps, search the web, or sync the watch to your phone to get notifications. You might be able to start paying for purchases with your Android Wear watch soon.

Reviewing Android Wear is a whole other article. Here’s a detailed tutorial for setting up Android Wear on a smartwatch.

One of my biggest gripes is the flat bottom of the display. This is also an issue on Fossil watches. The Fossil Q Wander features a flat-tire display, for example. It’s a good thing Michael Kors is so attractive that I can overlook that negative.

If you want a fully rounded display, you might have to splurge for the TAG Heuer Connected smartwatch.

The Michael Kors Access has the same capacity battery as the Samsung Gear S3. However, Samsung claims that its watch gets 3 to 4 days of use off of one charge. I have found that it gets about two days.

I have to charge the Michael Kors Access every day, if not more frequently. The battery life is dependent on a number of things, including the brightness of the display and how often you receive notifications. If you’re messing with the watch all day, it’s going to run out of a charge more quickly than if you leave it alone.

Like many smartwatches, this one has a wireless charger. That doesn’t really mean that there’s no wire; it just means that the wire doesn’t plug into the watch. Instead, it sits magnetically on the back of the watch.

The charger can fall off without you noticing. That’s a bummer when you find your watch dead as you go to put it on in the morning. A dock or charging station would work better.

The Michael Kors Access can be irritatingly inconsistent when it comes to performance. The microphone doesn’t always pick up sound, even in a quiet room.

The whole point of using a smartwatch is to make life more efficient. Duplicating these steps made me a little crazy. It didn’t happen all the time, though. The glitches occurred just often enough to be slightly annoying.

The nice thing about buying a watch nowadays is that you can see what other people think of it before you make a purchase. I haven’t seen many complaints about this watch.

Most of them are along the same vein as my grievances. The battery life could be longer, the display could be a little better and the watch could operate a little more smoothly.

However, most people who buy this watch are swayed by its good looks, making the negatives play second fiddle.

Here are some reviews from Best Buy customers:

“This watch is a very nice looking watch. Capabilities are also good.”

“This watch is gorgeous and it is extremely helpful!”

Sometimes love can be blind. 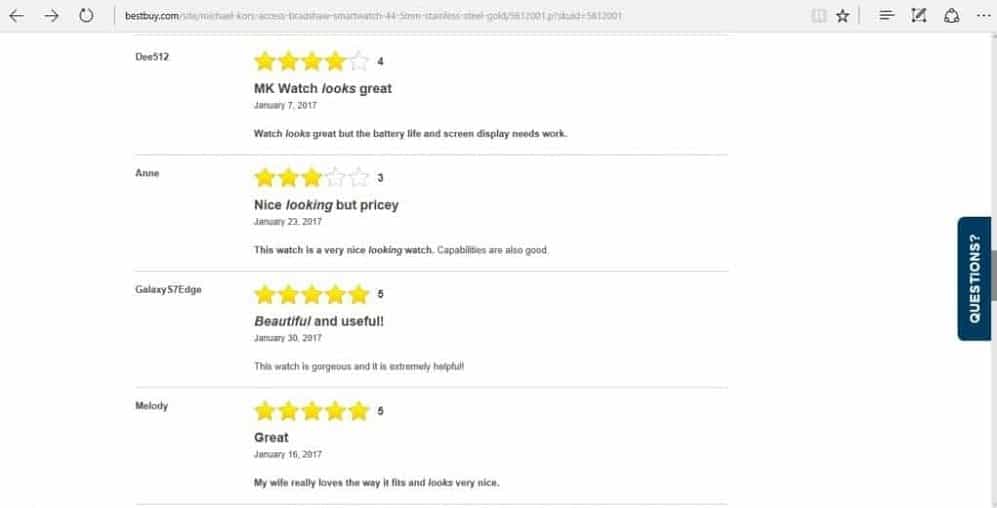 You might be asking yourself if the TAG Heuer Connected smartwatch is really an alternative to the Michael Kors Access. In terms of name brand, quality, and attractiveness, it is. However, it’s only a realistic option if you’re willing to put down several hundred more dollars.

It uses the Android Wear operating system, so its app features are basically the same as the Michael Kors. TAG Heuer offers its own watch faces. The selection is nice, but I prefer the Michael Kors options.

If you’re into name brands, you might prefer this watch. You can check it out and decide for yourself if it’s worth the extra thousand dollars.

The Fossil Q comes in three different models: Wander, Marshall and Founder. Like Michael Kors, Fossil is a reputable name in fashion. That’s why the company’s smartwatch is so attractive.

It’s a step down in regards to luxury, though. The Michael Kors watch is a little bit dressier than the Fossil, in my opinion. Even the Dylan, which has a sportier feel, looks more decorative than the Fossil Q.

This one might just come down to design preference. Check out the Fossil Q to see if you prefer the look to that of the Michael Kors Access.

This watch has a much lower price point than the Michael Kors Access. In a way, you’re paying for the lack of style. The Moto 360 isn’t unattractive, but it doesn’t necessarily make a fashion statement either.

This can be a valuable feature if you prefer a subtle watch. However, the Moto 360 is just as big and heavy as the Michael Kors Access.

Even though I think the Michael Kors is the way to go if you’re going for fashion, it’s worth checking out the Moto 360 for a cheaper option that you can wear to the gym.