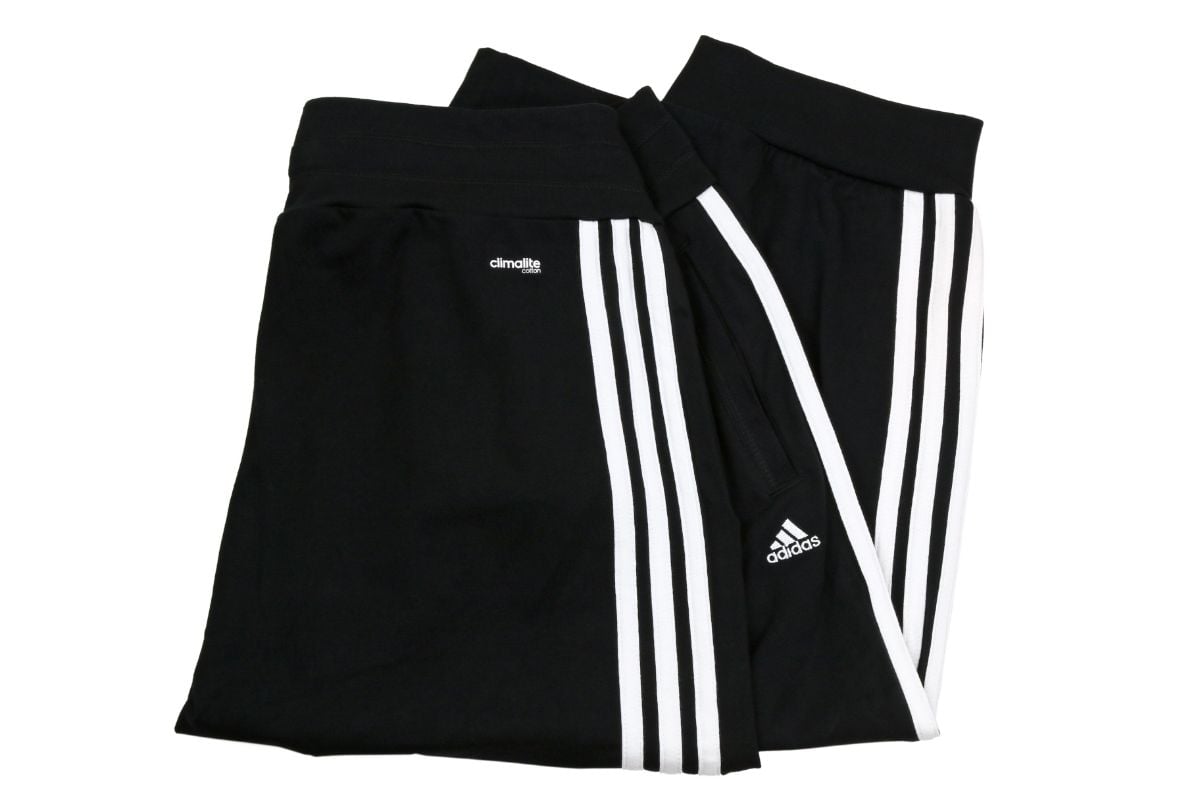 The Adidas Tiro is a kind of track pants that many people want to have. It is one of Adidas’s trendiest track pants, with a baggy top and a tapered and zippered bottom. The Tiro became so popular that many different versions of the same pant were inspired by the very first Tiro.

One key marker of this pant is the infamous Adidas stripe going down the side, but it is the baggy cut and tapered bottom that make this track pant so popular.

The first Tiro was the Tiro 17, which was a half-stripe version of the Adidas track pant, and included mesh along the waistline. These Tiros are very hard to find. The Tiro 19 was the next version and is a little more readily available than the first Tiro.

The 19 was a pant with a full stripe and an asymmetrical section of fabric along the leg. Following that came the Adidas Tiro 21 where the stripe lengthened from a half stripe to a three-quarter stripe and ran across the front portion of the leg.

A key feature that many people love in these pants is that the zippered bottoms allow you to pull them on over shoes, after a workout or a swim, or when heading out for the day. The pants are also made of recyclable materials from a double-knit Primegreen fabric.

With a starting price of $45, the Adidas Tiro is affordable for a wide market, with 75 percent of its marketing being American. It is also purchased widely across the world in Brazil, Canada, the United Kingdom, Vietnam, and many other countries, selling largely to the 25 to 34-year-old age bracket.

If you like the Adidas Tiro and are looking for other kinds of pants like it, use this guide for different track pants that you can wear in style and comfort.

1. Fila’s velour track pants are a little more expensive than Adidas Tiro, but bring a new level of cool to leisurewear 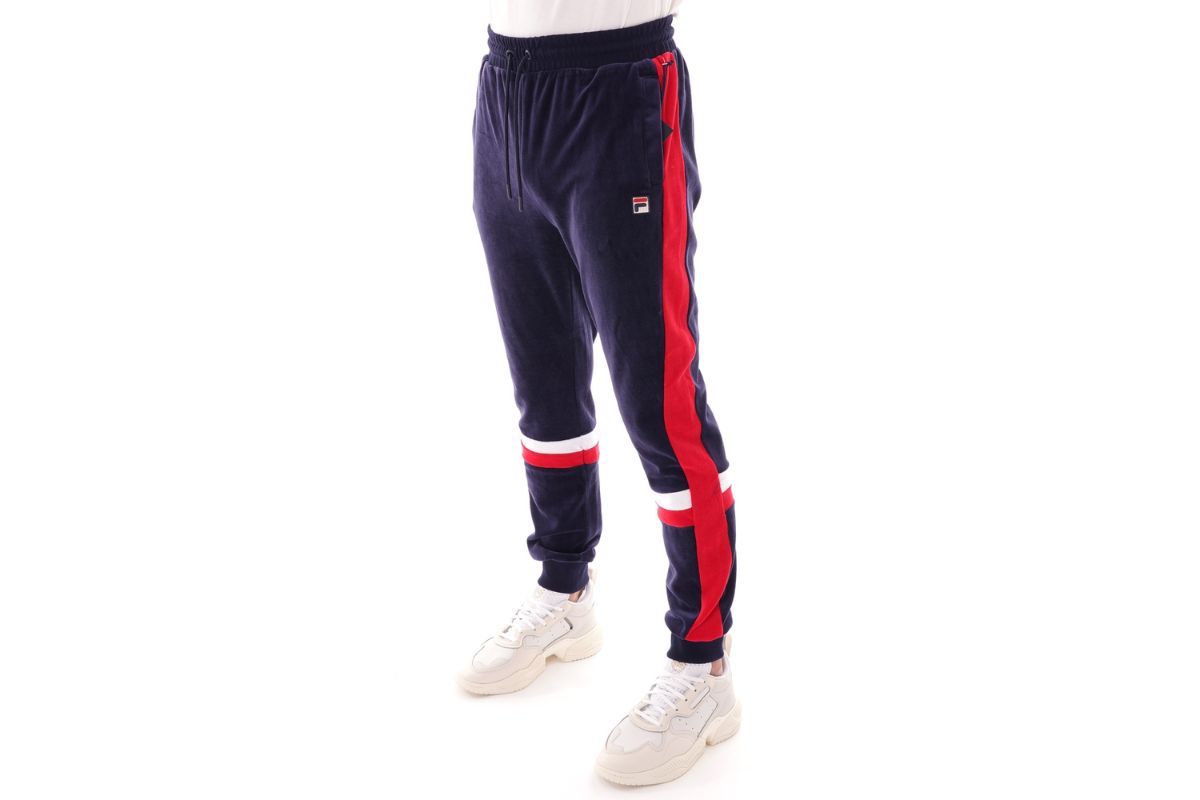 Fila is another name in leisurewear that is on trend, but also very comfortable to wear. It is also one brand that can come close to the Adidas Tiro feel. Cue the velour track pant that offers a color-blocking and polyester blend that brings a level of comfort to your track pant that you will want to sleep in. With an elastic drawstring like the Tiro, it is also adjustable for additional comfort.

Fila also has customers in the Republic of Korea, India, Ukraine, and many other countries. Its primary audience is 46 percent male and 54 percent female. Its target audience is in the 18-24-year old age bracket. 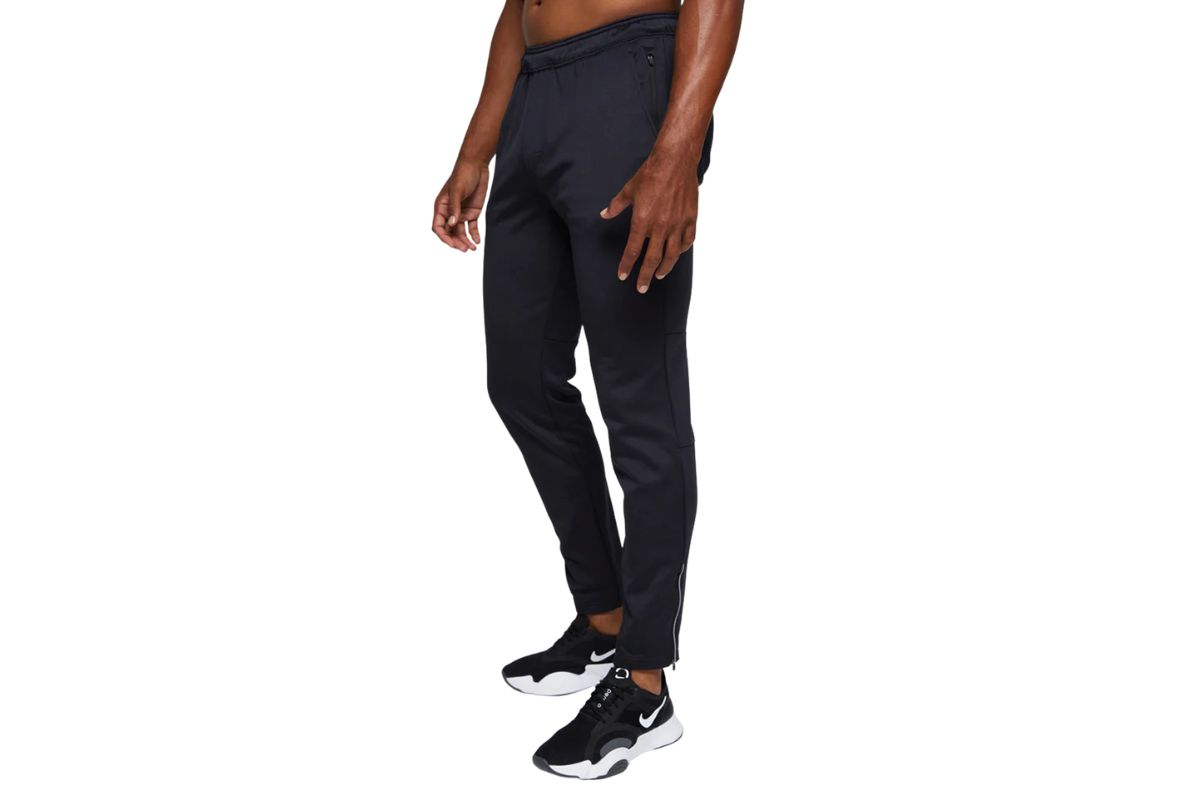 If you are looking for tapered track pant much like the Adidas Tiro, the Fourlaps track pant was made to get some work done for you. The company Fourlaps is not as popular as Adidas, but it still offers a quality product that lives up to its athletic-inspired name.

The company was founded by Aniel Shapiro, with the mission to provide training gear to the world for men and women. He wanted athletic wear for urbanites, and so Fourlaps with a higher price point was born.

These particular track pants are going to begin at $98 and offer the same zippered legs that the Tiro has. You are also going to love the multiple slant pockets and elastic drawstrings that come with these pants. The focus with Fourlaps is to provide a comfortable fabric and flexible pants.

These fabrics work with the body to keep it both cool and warm, regardless of your activity or activity level. It also has a moisture-wicking feature that makes these pants easy to work out.

Another key feature of this brand is its sustainability. Fourlaps asserts that 88 percent of its products are biodegradable and recyclable.

It is a mission that has resulted in a wide market that is 86 percent American, 7 percent Canadian, 4 percent from the United Kingdom, and also marketed to many other countries. The demographics here are 64 percent male, 36 percent female, and primarily in the 25 to 34-year-old age bracket.

3. Under Armour training knit track pants are a global product with a similar price point to the Adidas Tiro 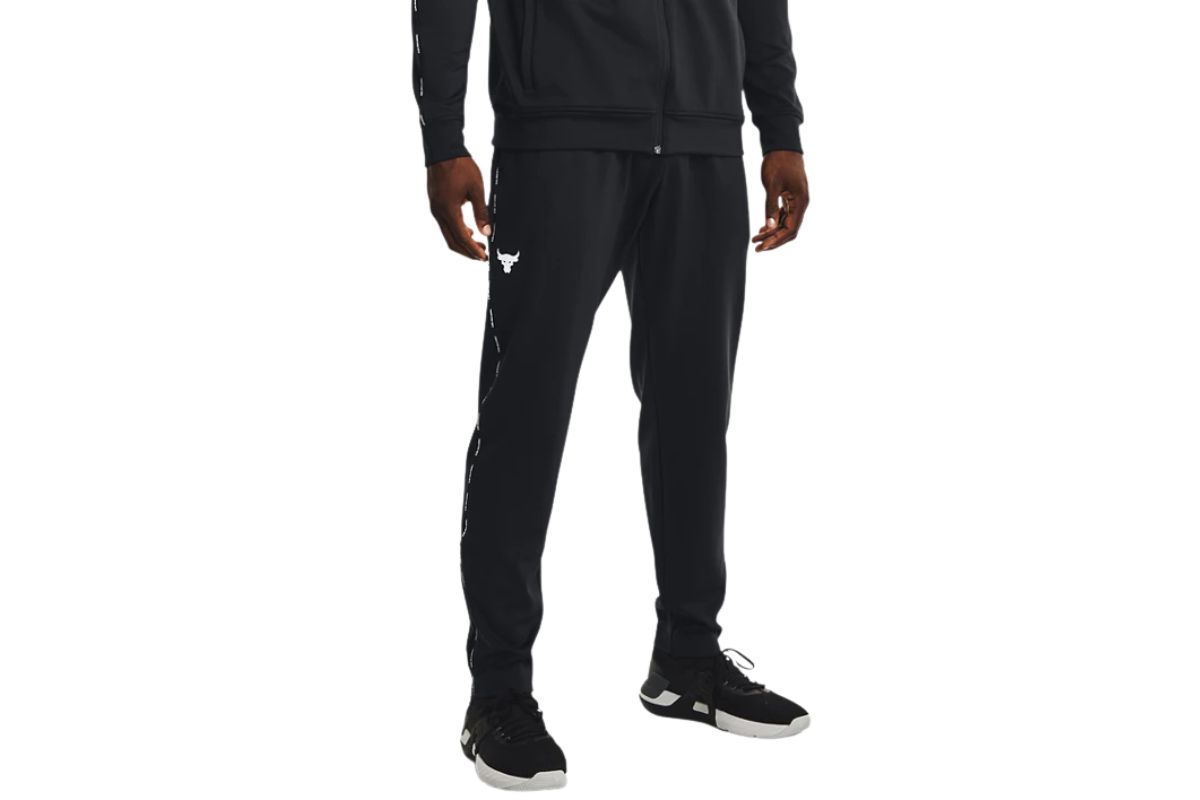 The Under Armour brand prides itself on quality athletic wear that you can enjoy almost anywhere. Their track pant that is similar to the Tiro comes in at a slightly lower price point than the Tiro with a starting price of $35 at most retailers.

Under Armour sells a wide range of products that includes athletic and leisure wear and sporting equipment.  This company was founded in 1996 by a 24-year-old who had recently played as captain of the football team for the University of Maryland.

His name was Kevin Plank, and he started selling clothing out of his grandmother’s basement. When word caught on about his clothing, he began moving around the country in his car selling clothes until he eventually sold to a team for his first major five-figure sale, a sale that occurred in his first year of business.

One thing Plank noticed when he was inspired to sell clothing was how his compression shorts would stay dry during a game or practice, and he wanted athletic wear to have this same feature. Moisture-wicking clothing was his new mission. In fact, Plank’s moisture-wicking formula came long before Nike’s or even that of Adidas.

His innovation caught on and garnered media attention in USA Today and other publications. Soon, NFLers were wearing Plank’s clothing and still do today. While his business started off with contracts with major teams, his products are items that anybody can buy today.

The track pants like the Tiro are similar with a tapered fit, contrast side stripe, and elasticized drawstring waist. His pants are seen on many celebrities and have even appeared on television in programs such as House of Cards and films such as The Blind Side. Since 2016, Dwayne The Rock Johnson has been one of the company’s key brand ambassadors.

Today, the company has a market share that is 87 percent American, and 2 percent Canadian, and it also sells its products to India, Poland, and the United Kingdom. Approximately 56 percent of its customers are male and 44 percent are female, with the largest number of shoppers being in the 25 to 34-year-old age group. 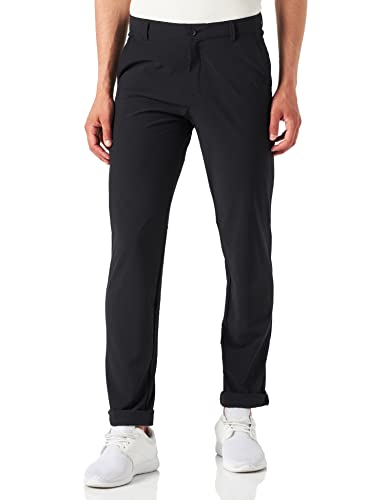 When you are looking for track pant that comes with the phrase “quality craftsmanship”, then you may want to consider those by Oakley by Samuel Ross. These are designer track pants with a price that starts at $215, a price that reflects the history that has gone into the development of fine products with a designer mission.

Launched in 197, the company is based out of Lake Forest, California, and has at its focus sports clothing and equipment. It is said that the company prides itself on holding over 600 patents for its products.

By 1995, the company had gone public and had raised over $200 million. Today, the company prides itself on using technical innovations to test its products rigorously through a wide range of extreme conditions.

It also has contracts with multiple high-profile organizations, including the United States military and many law enforcement agencies as its products are durable and of industrial strength quality. Oakley was also instrumental in developing a key mask used during the Covid-19 pandemic, one that was sold around the world.

Today, its exceptional track pants start at $214 and come with an elasticized waist and a relaxed fit. The hem, while not fitted, comes with a drawstring.

Oakley’s products are sold to a predominantly American market that is 43 percent American and 7 percent Canadian. The remainder of its market is all over the world. The market is also 68 percent male, 32 percent female, and in the 25 to 34-year-old age group.

5. Levi’s red tab sweatpants are in the same price point as the Adidas Tiro and as comfortable as you imagine they would be 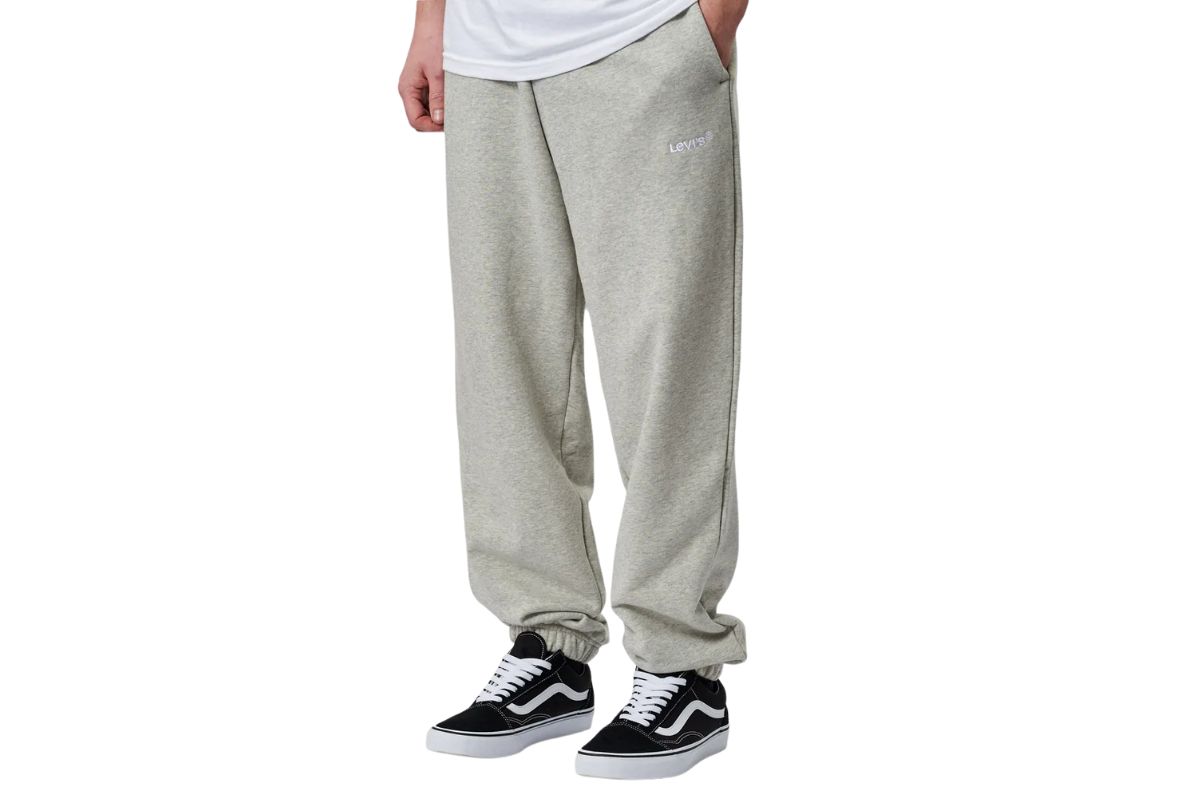 The name Levi on its own is going to get you excited about these track pants. Levi is of course the company that is formally known as the Levi Strauss Company. This is a company that launched the trend of Levi jeans, although denim was not Levi’s invention. With a starting price point of $30 for Levi’s red tab track pants, however, you are going to love how these track pants feel on your body and on your budget.

The company was launched by a German man named Levi Strauss who began working in Louisville, Kentucky and became an American citizen by 1853. The man’s family opened up a dry goods store in California during the Gold Rush, and by 1871, their first pair of denim pants was born. They were called blue jeans and became the new work pant for the area.

Today, added to its product line is the red-tab French terry track pant. They are what Levi is calling the classic take on your favorite comfortable clothing. This is a pair of pants with a relaxed fit that has a straight leg and elastic cuffs. It is a piece of clothing that you will want to wear all day.

The market for these pants ad Levi products is 52 percent American, and 9 percent in the United Kingdom. The company also has a large customer base in Canada, Spain, and France in addition to having stores all over the world. Levi’s shoppers are 41 percent male and 59 percent female and are largely in the 25 to 34-year-old age group.

6. Outdoor Voices Cloud Knit sweatpants are pricier than the Adidas Tiro but are as comfortable as the name implies 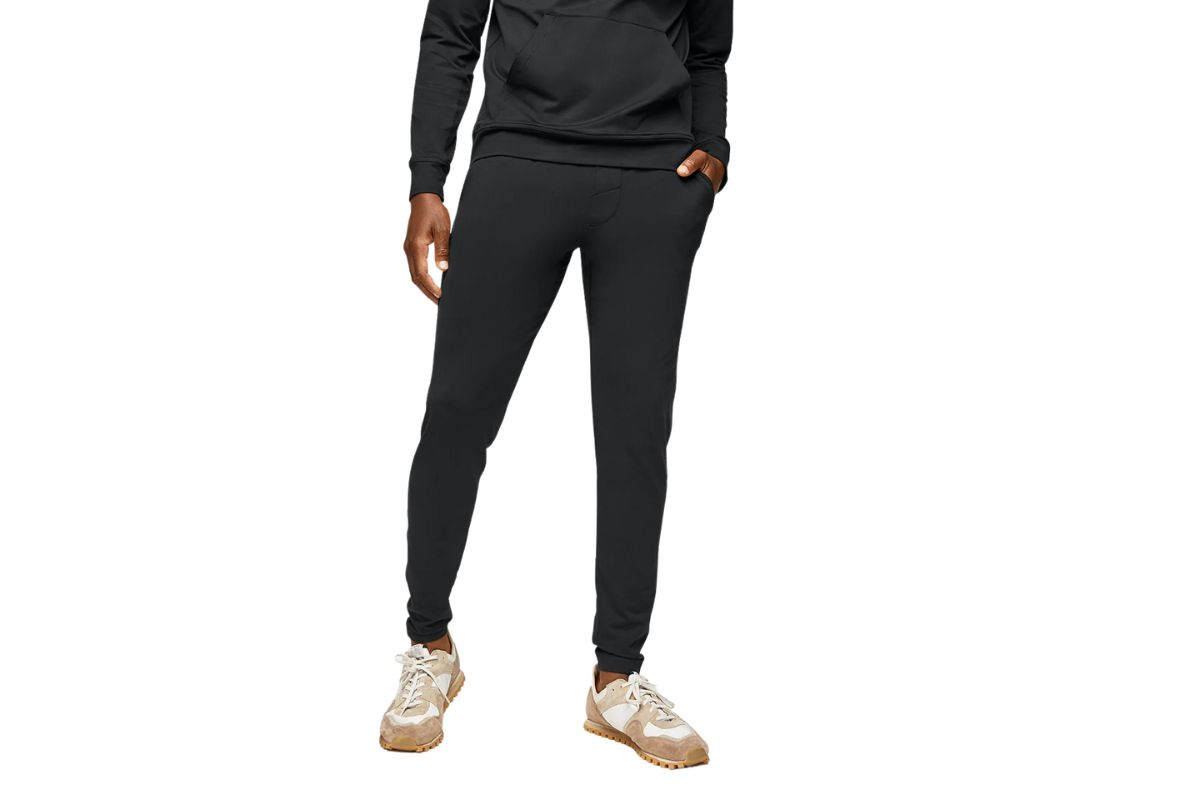 You just want to wear something described as cloud knit, don’t you? That’s what the designers at Outdoor Voices thought when they came up with these track pants.

These pants are frequently referred to as the softest pants that you will ever want to wear. They do not have the tapered legs but they do offer a very comfortable mid-rise and flattering look that comes with the way the cloud knit fabric hangs on the frame.

The pants also feel like cloud-like fabric should, light, breathable, and soft. You’ll also find them to be wrinkle-resistant, another significant plus with this fabric. If you are using them to work out, they also absorb moisture easily.

7. The sweatpants that are called Talentless are a product in a brand developed by Scott Disick 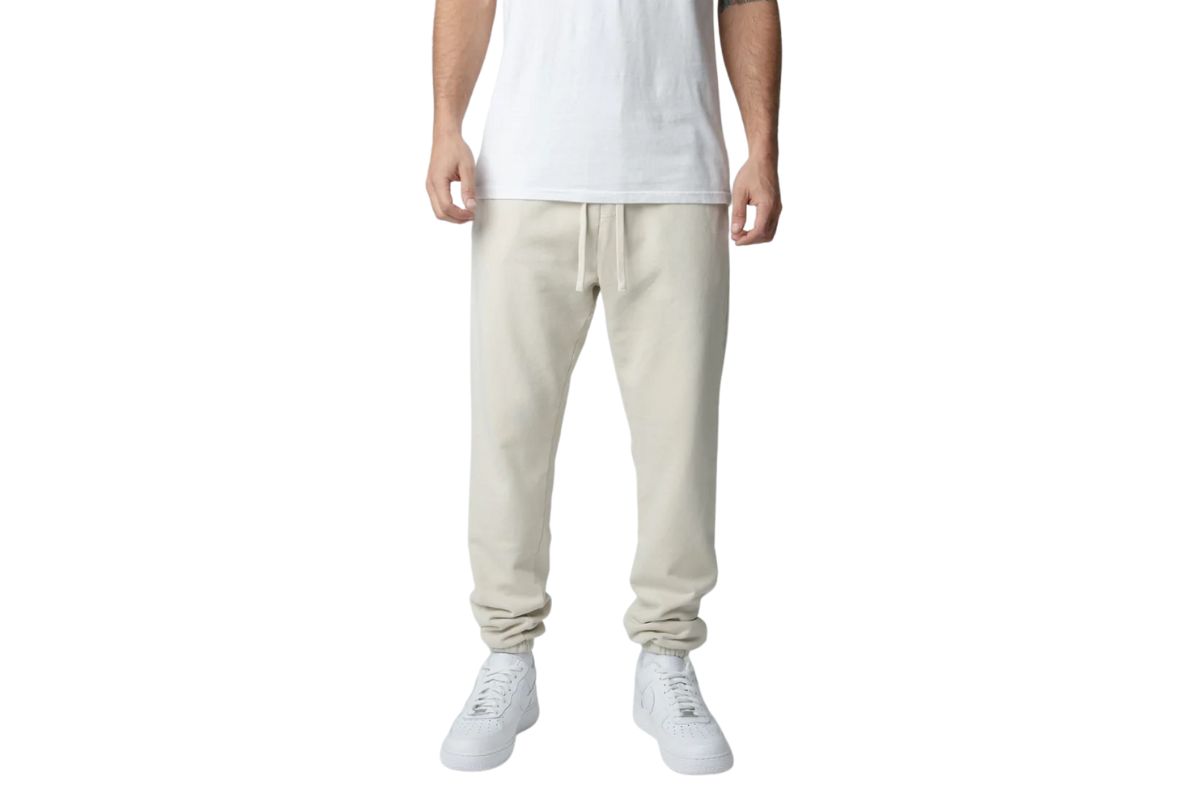 The brand called Talentless was launched by Scott Disick, former partner to Kourtney Kardashian, whom he shares three children with. He says the name of the brand was spawned by a cutting remark made by one of his managers, who used the word “talentless” to make fun of him and described him as a couch surfer.

Today, the brand offers a wide range of athletic-inspired products where the sweatpants are called best sellers. These pants are made of heavy cotton that is both warm and lightweight. The fit is relaxed so you aren’t seeing the tapered legs that you might see in the Tiro, but the pants are as popular all the same.

This is not a product you will have to worry about sizing up or down in, the sizing is true to your own size. With a starting price of $200, the product is more expensive than the Tiro, but the Kardashian name may be part of its brand price point. Now, what was once an insult or offense to Disick, he is printing all over shirts and hats.

The key market for this product is the United States which has 59 percent of the market share. The brand has 16 percent polish shoppers and 6 percent French, with another 3 percent in the United Kingdom and 2 percent in Canada. Of its customer base, 57 percent are female, 42 percent are male, and the primary customer age bracket is 25 to 34-year-olds.