Two brand-name flagship watches go head to head. The Samsung Galaxy Watch/Active 2 is amazing but is it even possible to challenge the Apple Watch Series 5? 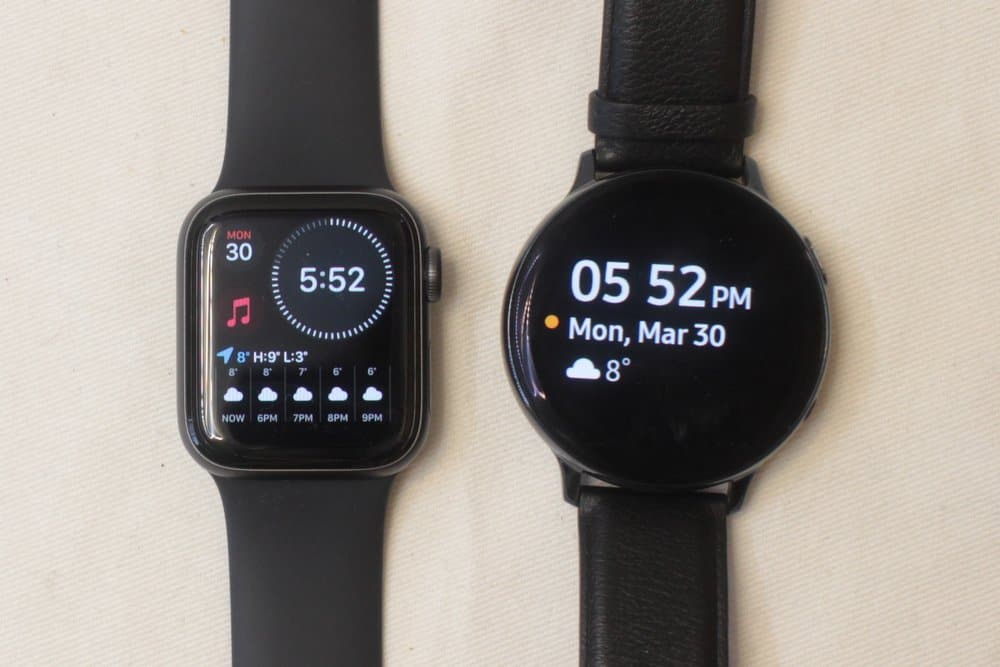 This is the review that I have been waiting to write.

It’s like one of those Chevrolet vs Ford pickup truck reviews that review two systems that are technologically on equal footing. Both of which have a strong fan base too.

The Apple Watch Series 5 and the Samsung Galaxy Watch/Active 2 are indeed very similar in functionality.

I would say you will not be disappointed if you get either watch as long as you buy the Apple Watch for pairing with an Apple iPhone, and a Samsung watch with a Samsung phone. For the purposes of this review, we will be pairing the watches up with their smartphone counterparts.

Both the Galaxy Watch Active 2 and the Apple Watch Series 5 sport a modern look with its curved edges and thin bezel. The Galaxy Watch looks hardier as it has a thick watch case and a rotating bezel.

The Galaxy Watch’s strap is also made of silicone but for some reason, I found it to be very uncomfortable. Luckily, replacing the Galaxy Watches’ straps is very easy as they use the universal 22mm strap.

Both Galaxy Watches are heavier than the Apple Watch and the heavier the watch, the less comfortable.

Another upgrade you can get on all these watches is the LTE capability. But even before you buy the LTE version, make sure you check if your carrier is supported. Here in Canada, most people are subscribed to a discount carrier and therefore won’t be supported as you need to have a subscription to the premium carriers.

It seems to me that the number of carriers supported by the Galaxy Watch is fewer than the Apple Watch. 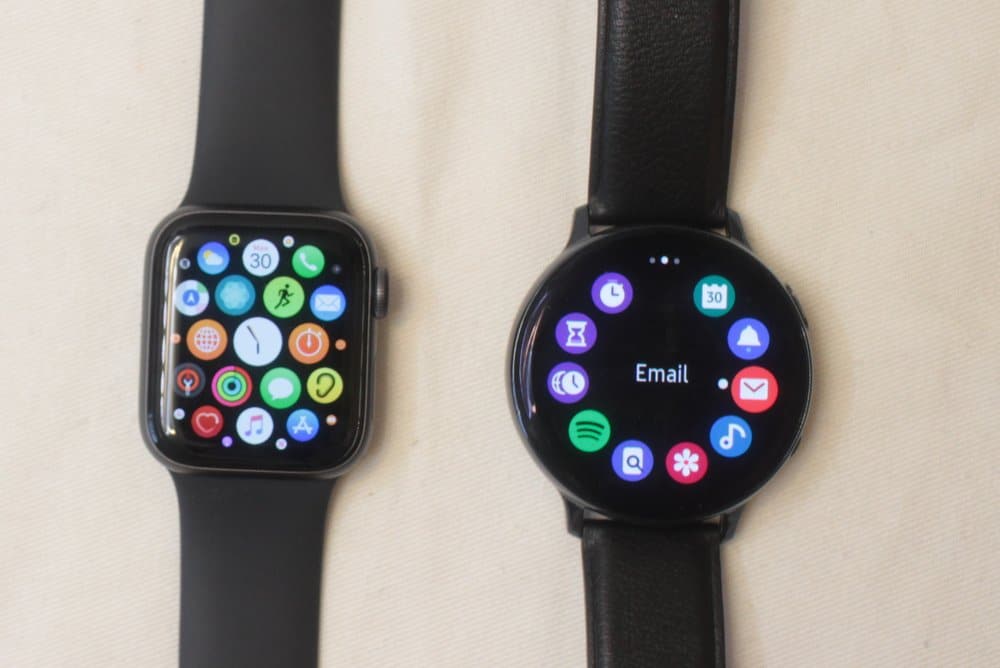 Out of the three, the virtual bezel is probably my least favourite. I compare it to using a trackpad versus a mouse. The virtual bezel requires your finger to run along the circumference of the Active 2’s screen in order to scroll through menus. It can be quite imprecise.

The rotating crown is the middle option. It offers you tactile feedback when you rotate it, but can also be imprecise since there are no notches like the Galaxy Watch’s physical bezel, which is my favourite among them. 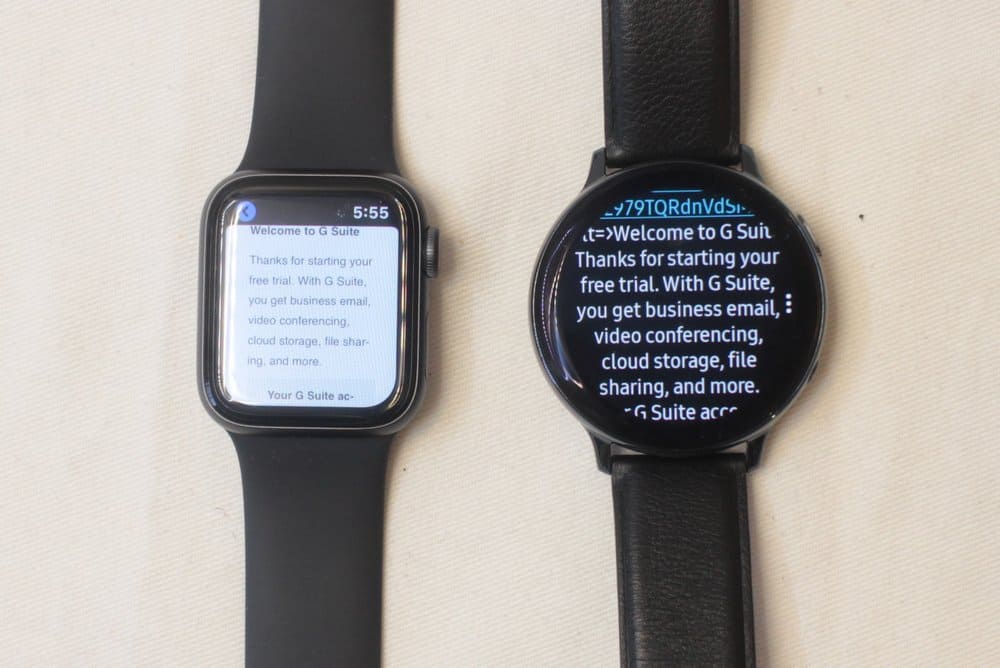 You won’t get integration much better than this. Brand loyalty really pays off here as both the Samsung and Apple experience is seamless.

When you get emails or text, you will be able to reply to them through notifications as well as use the corresponding app to access your texts and email accounts exactly the same way as if you were on your phone.

The experience of reading an email on the Apple Watch Series 5 is superior to that of the Galaxy Watch. On the Galaxy Watch, your emails will be text only, whereas on the Apple Watch, they are more similar to what you’d see on your smartphone. The downside to the latter presentation is that sometimes text can be very, very small, as it compresses text you’d see on a 6-inch screen to a thumb-sized screen.

But I prefer it the latter method. At least the formatting is there.

The Samsung Tizen OS suffers from the same issue as vote splitting does to a democratic society with too many similar competing parties.

Smartwatches are a niche product. They are not as ubiquitous as smartphones. Therefore, the user pool is small, and developers generally only build mass market apps when there is demand.

The Samsung Tizen OS competes with the Wear OS and unfortunately comes out behind. The apps you can get on the Tizen OS are far fewer and less useful.

Contrast that to the Apple Watch which is the ONLY watch with such high levels of synergy with the Apple iPhone. The user base is much deeper as compared to the Tizen OS, and hence, you get better apps.

For example, there is no native map navigation app on the Samsung, whereas the Apple Watch has Apple Maps.

The Apple Watch also comes with a bunch of very innovative apps including a noise meter which alerts you when your environment is too noisy. 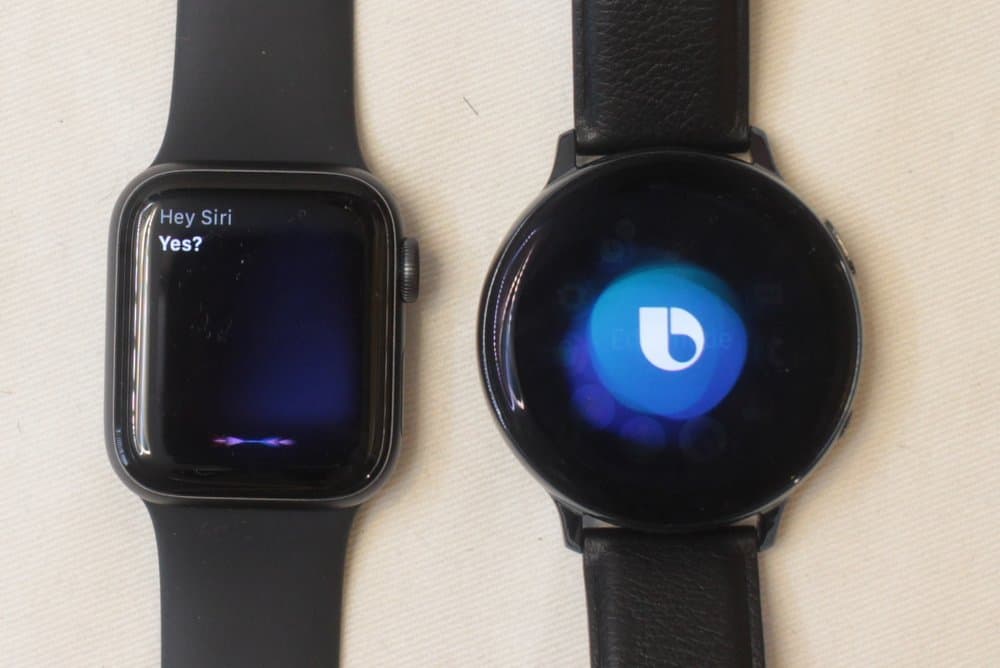 Experience is a great teacher when it comes to speech recognition. Maybe that’s why Google is so eager to give away its Home devices.

The point I’m trying to make is that Samsung’s Bixby doesn’t have the breadth of experience that Apple’s Siri has. This means that what you say to Bixby can be misinterpreted very severely. The chances of Siri doing that is lower.

One of the most convenient ways to input text is through speech-to-text. Samsung is an exercise in frustration but luckily it has a very good T9 number pad predictive text keyboard. Siri is much more reliable and pleasant to use.

The information that Siri can provide you is much better too. It can give you exchange rates, directions and other information that requires searching. Whereas, Bixby can only do a very limited number of tasks through the apps it’s supported. I asked Bixby for the US dollar to Canadian dollar exchange rate. It told me it couldn’t tell me the weather. 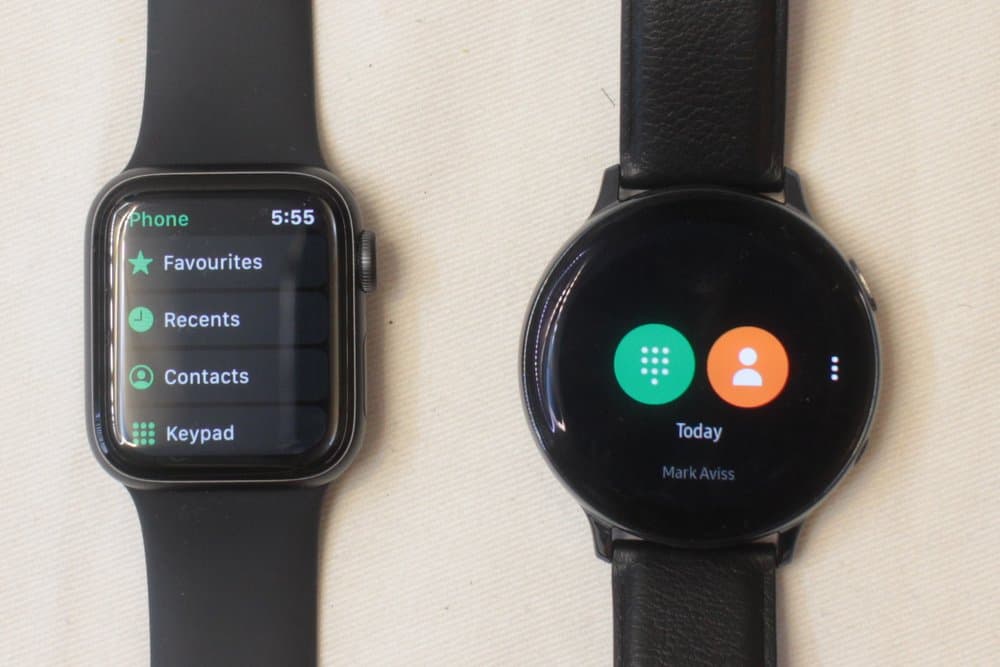 Both watches support calls and I would say they’re on par with each other. You can call on your watch, go through your contact list and speak using the watch.

Call quality is decent according to the folks that I asked. 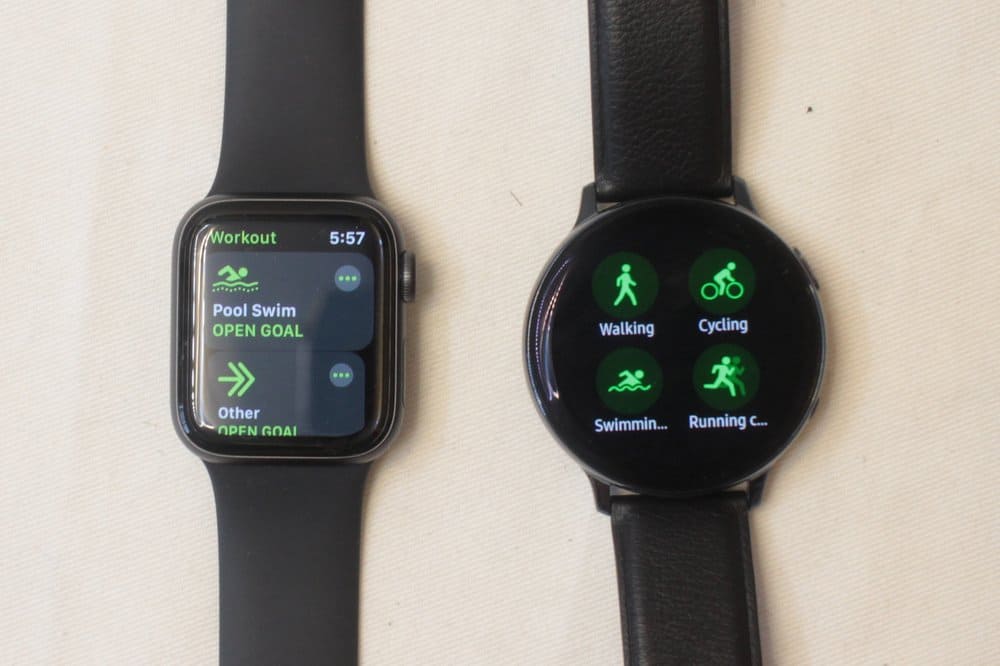 Both systems integrate fantastically with their respective health apps. Samsung Health is an amazing app that comprehensively tracks health data such as sleep, exercise and caloric management.

It’s the same with Health. It’s very comprehensive with sleep analysis, nutrition (but not a calorie counter) and exercise functions. It also tracks your noise exposure, which Samsung doesn’t.

What I found really missing with the Health app is the calorie counter. Samsung Health is amazing because it’s able to find local products’ calorie and nutrition count for you. It was instrumental in my understanding that I lack calcium intake.

Both watches can also be taken into the water, so it’s great if you enjoy swimming or kayaking. The heart rate sensor on both the Galaxy Watch Active 2 and Apple Watch were reliable and that’s great. 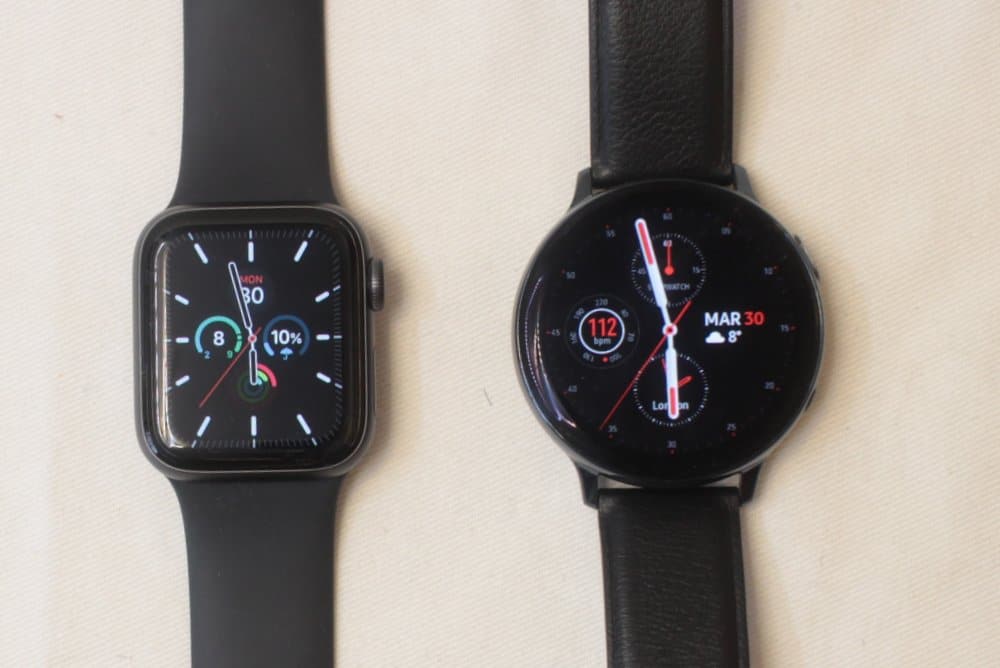 Writing a review really gives me an opportunity to be objective about each watch’s pros and cons. I really like the Apple Watch and Samsung watches, but put them side-by-side and the Apple Watch really shines.

While both are really comprehensive in their functionality, Samsung’s weakness in speech-to-text and voice assistance really dragged it score down. Its small app store also makes it lose points.

Ultimately, your choice of watch between the two is dictated by which smartphone you will have or will buy. You can’t use the Apple Watch with an Android and while you can use the Samsung watches with the Apple iOS, you would lose so many functions, it wouldn’t make sense.