Skip to Content
These are two fantastic flagship watches that I have come to conclude one is better than the other. As a Samsung user, my choice will surprise you! 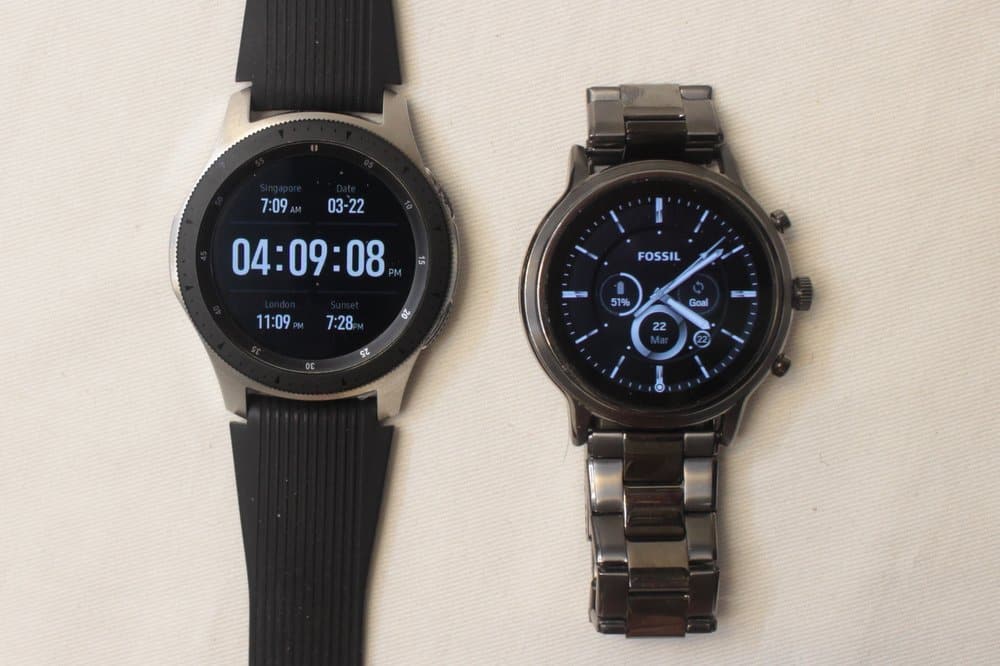 When I was learning economics, the Latin phrase ceteris paribus (with all other things being equal) would always come up. Age and experience also taught me that most of what I learned would only happen in a perfect world.

But the principle of ceteris paribus is a useful one despite how that’s pretty impossible in the real world.

Now why did I make all that effort to explain this? Because the Galaxy Watch and the Fossil Gen 5 Carlyle is the closest to a ceteris paribus review. The Galaxy Watch is very similar to the Galaxy Watch Active 2, so most points explained below will apply to the Active 2.

The key difference between them is their operating systems. The Samsung Galaxy Watch comes with Samsung’s Tizen OS while the Fossil Gen 5 comes with the Google Wear OS.

Yes, they might have different hardware, but their user experience is similar. One landmine with Wear OS watches is that they can perform quite horribly if you buy one with lacklustre hardware. In my experience the Fossil Gen 5 is the only Wear OS watch where you won’t have to suffer lag, unresponsiveness and poor battery life.

So this review is a good start if you want to know whether you’d prefer a Samsung watch or a Wear OS watch. We have two fantastic watches that have their own strengths and compromises.

If you buy either watch and pair it with an iPhone, prepare to lose many useful features. Chief of which is the ability to reply to notifications, texts and emails. You can still read them, though. I’ll just reiterate my stance on iPhone users who want a general-purpose smartwatch: buy an Apple Watch.

On non-Samsung phones with the Galaxy Watch, you will have a very, very similar experience once you’ve download the requisite apps. You can reply to notifications (including emails and texts) but you cannot use the Messages or Email app included in the Galaxy Watch.

If you want to pay using your watch, you can use Samsung Pay or Google Pay on the Galaxy Watch and the Fossil Gen 5 Carlyle respectively.

If you want to track your workouts, there’s Samsung Health or Google Fit.

But some features are better on one watch than the other…

The Galaxy Watch has an ingenious rotating bezel while the Fossil Gen 5 Carlyle has a rotating crown. Both help you scroll through menus.

On the Active 2, you get a “virtual” bezel which functions similarly.  The perimeter of the watch case is now used to scroll through menus.

I much prefer the rotating bezel because it’s more tactile. You can hear a click and feel a notch every time you rotate it. The rotating crown on the Fossil can sometimes be too sensitive if you just want to scroll just a smidge. 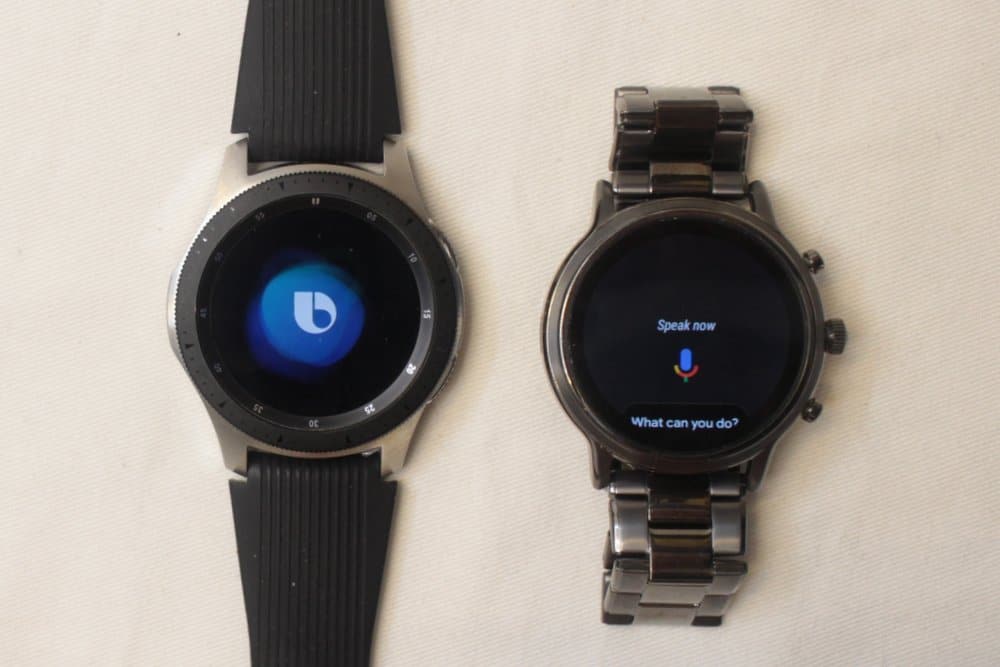 Bixby is less helpful and sometimes can be frustrating. Little misinterpretations such as confusing “where” for “there” and “four” with “for” can lead to some painful experiences. I mean, if you give up and do it manually, then it has failed, and Bixby has failed a few times to help me set a timer. And unlike Google Assistant, it can’t help you find directions or general information.

This has further implications on inputting text. If you are hoping to reply to a message on your Galaxy Watch using Bixby, cross your fingers and hope for the best because half the time, I end up using my phone instead.

I am much happier using the Carlyle’s Google Assistant for any speech-to-text replies. 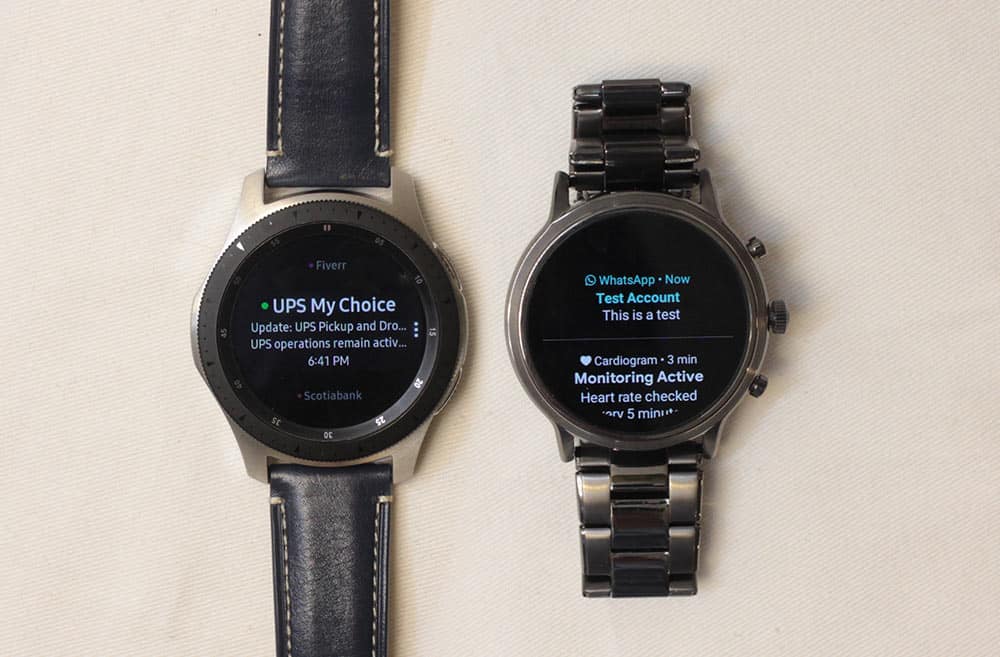 The preinstalled apps on the Samsung Galaxy Watch will allow you to access your emails and messages on your Samsung phone as if you were on the phone. Whereas if you used the Fossil Gen 5 Carlyle, you will not be able to do this.

On both phones, you can input text by hand writing letters, using a canned response or using a keyboard. The Wear OS offers you a full 26-alphabet keyboard while the Galaxy Watch offers you a T9 predictive text number pad keyboard. Alternatively, you can always use the speech-to-text systems. 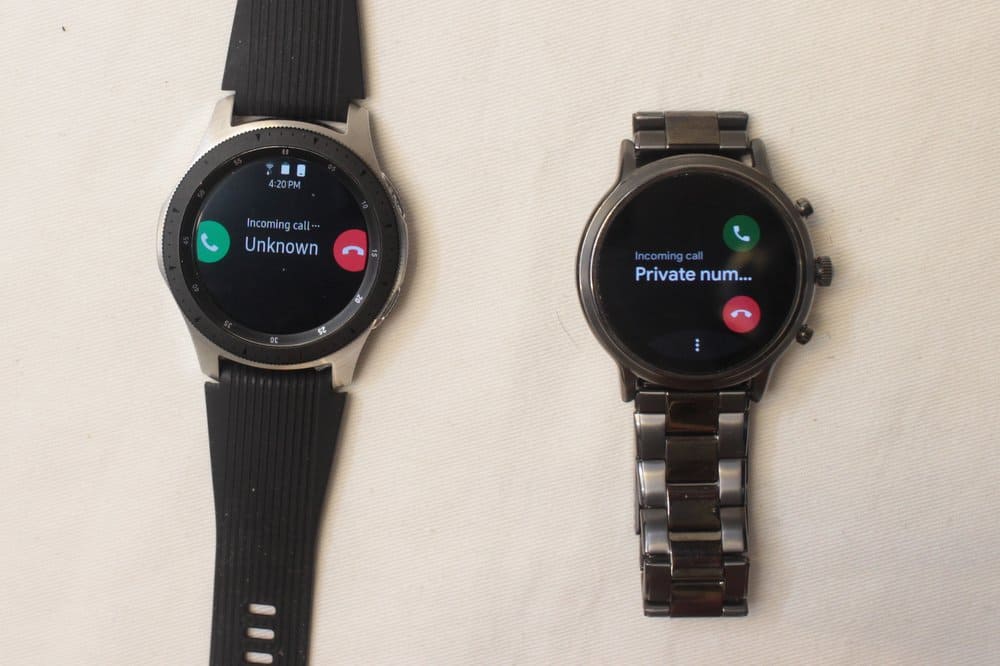 Both watches can accept calls and you can chat on the watch. Both are loud and clear enough in moderate noise situations such as in a mall’s food court.

The Fossil Gen 5 Carlyle’s battery will last you through a full day when you use all its passive features (including continuous heart rate sensing and always-on screen). The Samsung Galaxy Watch will last you two days when you do the same.

Both watches are medium-large sized watches. The Galaxy Watch comes with a silicone strap while the Fossil Gen 5 Carlyle comes with a band and clasp. You can buy the Gen 5 in other versions with different straps if you prefer that.

I really liked the Fossil Carlyle’s bracelet. Besides the initial hassle of needing to hammer out links in order to adjust the bracelet band to your wrist’s size, it turned out to be so much more efficient beyond the initial hassle. It will always be the right size (until you gain weight or lose weight). 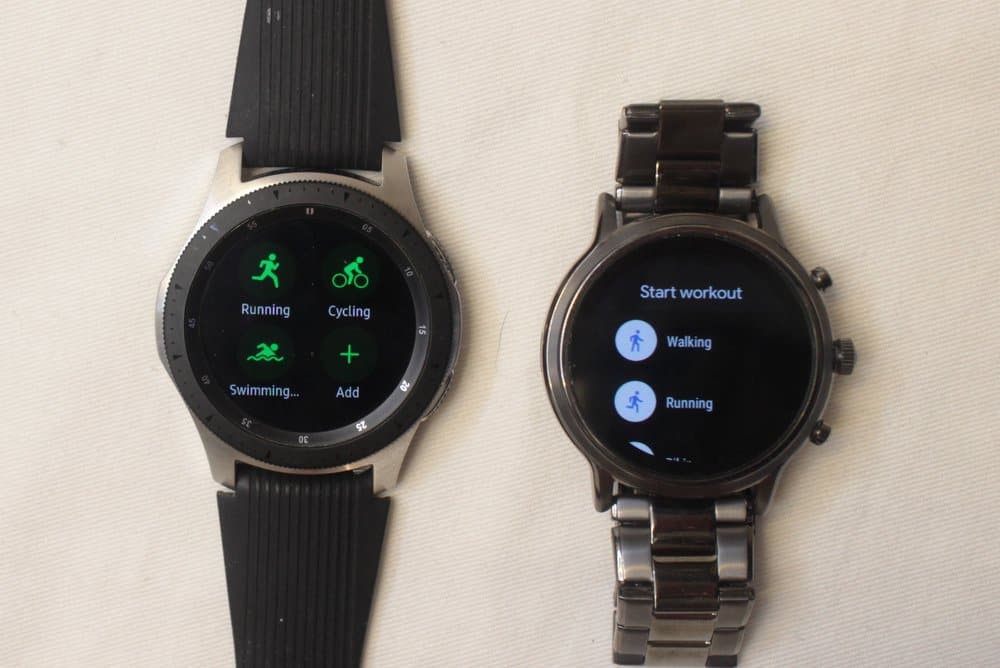 I’ll just say it off the bat — Samsung Health is superior to Google Fit.

That’s because Samsung Health is a more comprehensive wellness app than Google Fit.

Google Fit does use an innovative concept of “Heart Points” which grades the intensity of your activities and gives you points for working out.

And Google Fit can also share its data with other apps. While it doesn’t have sleep tracking, you can download an app from its big app store to complement this ability.

The Galaxy Watch also has an inactivity reminder which comes up if it detects you have been sitting for too long. The Fossil doesn’t. 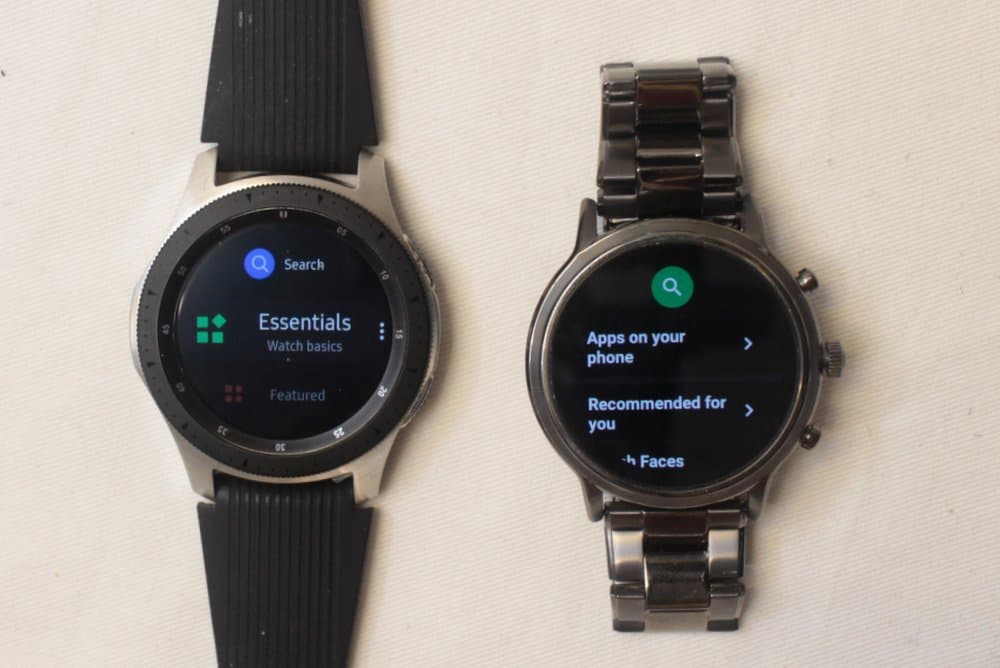 The Wear OS’s app store, Google Play, is excellent and has many apps that are very useful. I really liked having access to Google’s own apps including Maps, Keep (a notetaking app) and Translate.

Whereas Samsung’s Galaxy Store is a bit less exciting. Samsung has provided some really good apps for basic functionality like a calculator, a voice recorder and a speedometer, but beyond that, the number of third-party apps are smaller. You can get a third-party mapping app and also a free language translator app (that uses Google Translate). 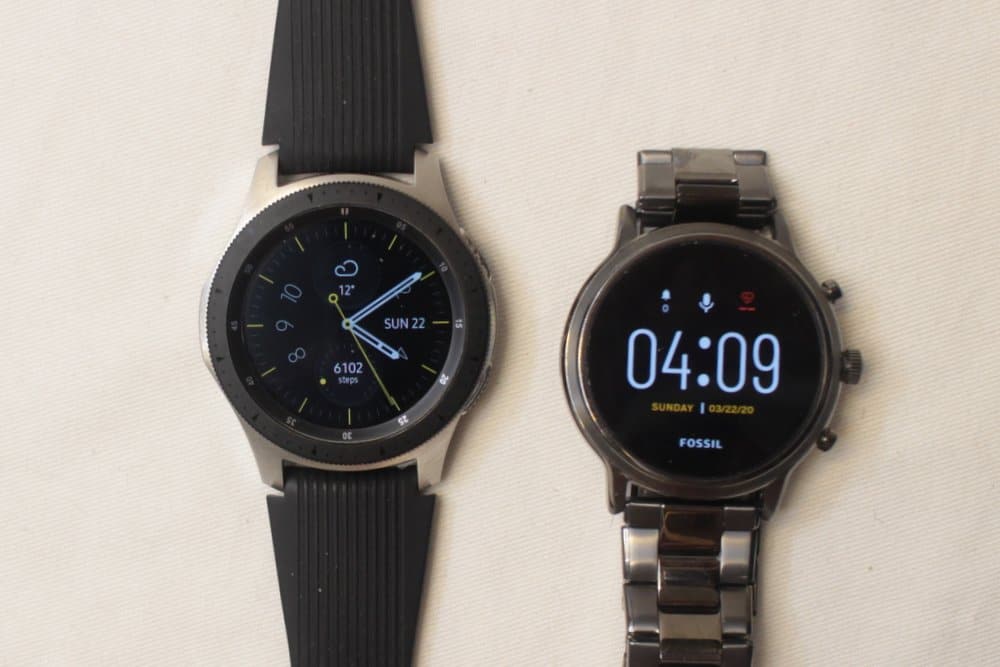 This is an article of true retrospection for me.

I used to tell everyone to just go get a Samsung watch if you have a Samsung phone, like me.

But today, I am here to tell you that the Fossil Gen 5 Carlyle is just a little bit better but mainly because of my priorities. I really care about having a good voice assistant and Bixby isn’t as good as Google Assistant.

Little things like the Fossil Carlyle’s bracelet also make for a nice daily convenience that I favour over the Samsung Watch’s convenience of not having to charge daily.

That said, if fitness and health is your priority and you don’t want to tinker, the Galaxy Watch offers you a better turnkey experience. Samsung Health is truly a fantastic app that will help you achieve your goals for sleep, weight management and exercise.