Here's a very interesting article about the iconic department store Macy's. Some these tidbits are great tips you need to know before you make your way to shop at Macy's. 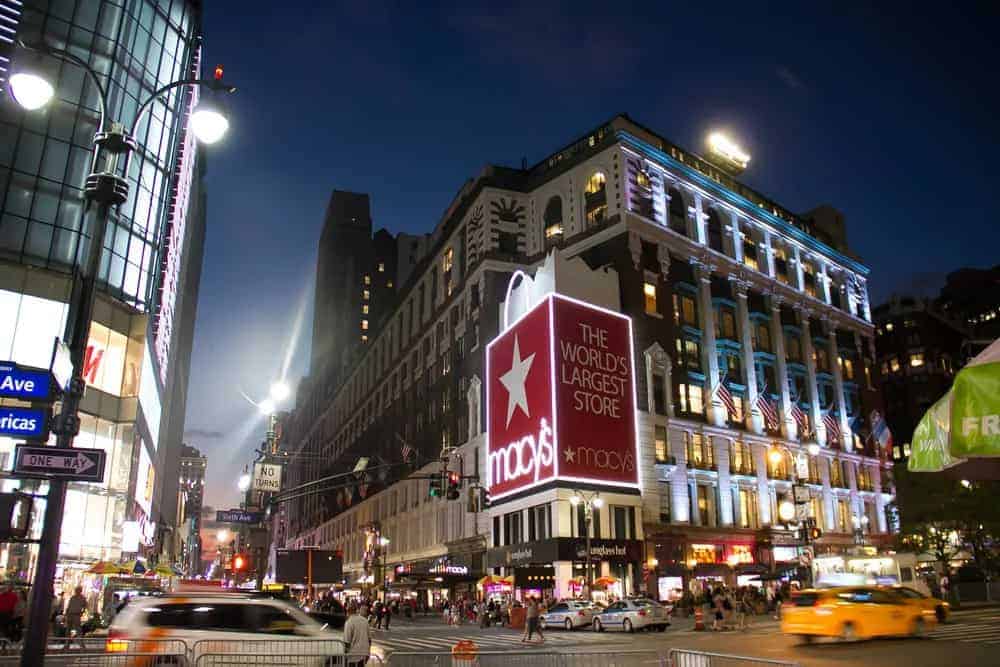 I had so much fun in the NYC flagship Macy’s store when I was there a few years ago at Christmas.  What an experience, more so because it’s so iconic. The crowds were epic. The Christmas decorations amazing.  All-in-all a fun time.

Macy’s has a lot more stores than just their New York City store now.  In fact, there are a whopping 659 Macy’s stores plus their online store.  Whether all 659 will survive is anyone’s guess.  However, no doubt their NYC store will be a shopping destination for many years.

I’m a history buff as well as a style buff.  I also love fun shopping experiences. Put that altogether and I researched and came up with this fun list of 20 things you need to know before shopping at Macy’s. 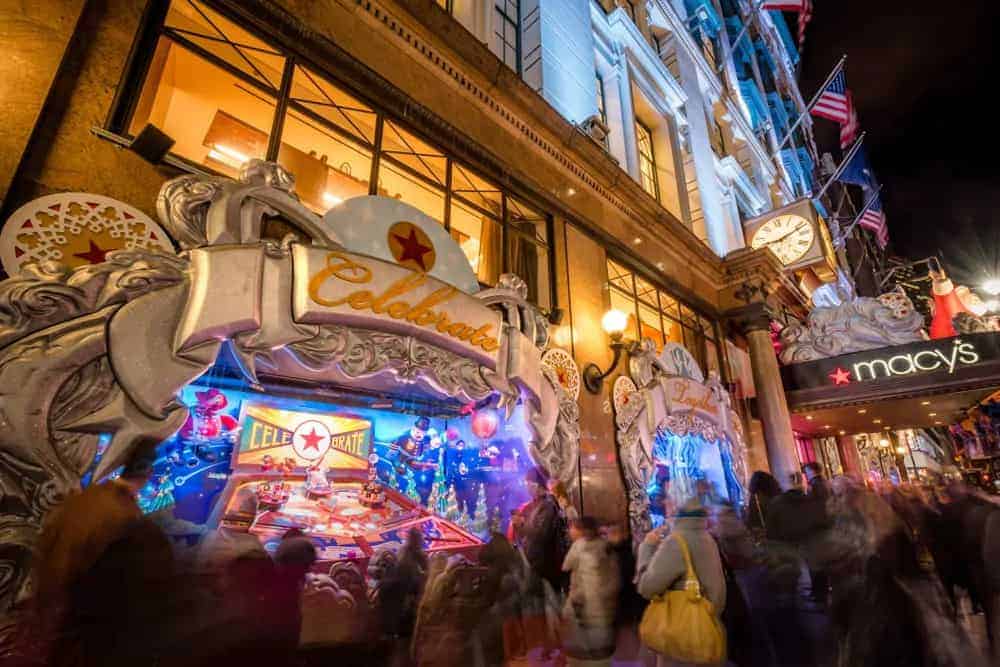 Whether you’re notorious for doing your Christmas shopping last-minute or suddenly have to find a replacement gift so you don’t gift the same present as somebody else, you’ll be happy to know that Macy’s is always open until midnight on Christmas Eve.

Where other stores may not be able to accommodate so efficiently, Macy’s pulls through, allowing you to stay on top of your holiday shopping goals with ease! These late-night hours are actually a tradition that stretches back to 1867, meaning that Macy’s has been making last-minute holiday shopping easier for over 140 years!

2. Women At The Forefront

In a culture and industry that has historically pushed women down to the bottom, Macy’s has done their part to empower women by being the first American retailer to put a woman in a position of executive power. Talk about girl power!

This approach to equality has been something the company has maintained since, continually embracing equal rights and equal pay for all that work for them. Macy’s helped break down gender barriers at the time and continues to do this today, giving women opportunities that might be difficult to find elsewhere in the department store job market.

You heard that right—the first Macy’s department store opened in New York City in 1858. The store, located on the intersection of 14th Street and 6th Avenue, continued to grow in size until reaching its modern incarnation. As of today, Macy’s continues to be one of the largest department stores and a prime example of how a company can truly grow. Not only that, but since its original inception the store now sports a variety of different products, whereas it only began with a focus on premium dry goods!

Did you know that Macy’s was the first store to introduce colored towels? That may seem like a peculiar fact, but it’s 100% true; Macy’s was not only the first department store to offer colored towels (beginning in 1932), but they were also responsible for pioneering many other products such as disposable tea bags.

You can even thank Macy’s for introducing the Idaho baked potato, something that also has become a household name since its debut! These innovations have happened due to Macy’s continual drive to push consumer-grade products in the future, making our lives more convenient.

Prohibition era New York brought with it many other cultural standards, such as speakeasies and bootleggers running free through the city’s underground culture to distribute alcohol to those who wanted it.

This environment became incredibly contentious, having the culture essentially neck-and-neck with the law, finding new ways to innovate the exchange of liquor before Prohibition ended at the end of the 1920s. After the Prohibition era ended, guess which store was given the first liquor license in New York City? Macy’s!

6. Restaurants While You Shop

Many Macy’s locations have something incredibly unique to department stores: restaurants to eat at while you’re shopping. This business strategy allows shoppers to not feel worried about the time they spend shopping. If you want to spend a couple hours at Macy’s but hunger is preventing you, stop by any of the in-store restaurants for a bite to eat before continuing your spree.

Macy’s locations around the country are well-known for this, with some of the locations housing an impressive amount of eateries. For example, the Macy’s in Herald Square (NYC) has a remarkable 22 restaurants within its structure!

7. Wooden Escalators Are Real (And Important!)

Escalators are common in our modern-day society, but it hasn’t always been that way. For example, in the 20th century there were still many stores and people who considered them to be very experimental, not being sure if the technology would stick. At the time of this skepticism, Macy’s was innovating with installing escalators in their store, though they were a bit different than what we know from modern incarnations: these escalators were wooden. In fact, to this day you can still find 42 of these escalators in working condition thanks to a precise preservation division.

8. The NYC Macy’s Has The Most Shoes On One Floor

Those who are greeted to the Herald Square Macy’s will be delighted to find that there is not only an entire floor dedicated to shoes, but that the shoe floor is the largest of its kind in the entire world. There are over 300,000 pairs to look at, making it a must-do for shoe fans since its opening in 2012. The best part? There are wonderful clearance sections that you must see if you’re looking to get a deal during your visit to New York City.

As of right now, the department store has locations in 45 different states, even planning on expanding its reach further in the years to come. Across all of these states combined, there are more than 810 locations, something that makes Macy’s one of the most popular department stores in the country!

10. Macy’s Took Time To Grow Into The Corporation It Is Today

Though it seems like Macy’s has it all, it wasn’t always this way—in fact, it took a while for Macy’s to grow to the size it has become over the years. For example, a huge advance in the store being able to have as many locations as it currently does was the adoption of the May Department Stores Company. Through acquiring this company, they were able to nearly double the amount of stores they had around the USA. After the transformation was complete in 2006, there was an incredibly positive reception to the new Macy’s storefronts all over the country!

11. The Original Macy’s Stores Has Over 26 Acres Of Storefront

As the flagship store, the Herald Square Macy’s has a lot of pressure to live up to, but this seems to be no problem, given how much the store innovates and does some pretty incredible things. For example, the selling space in the store itself adds up to over 26 acres—in other words, over 1.1 million square feet! This is an incredible amount of space that makes the flagship store the largest department store in the world! The store also takes up an entire block of Manhattan! 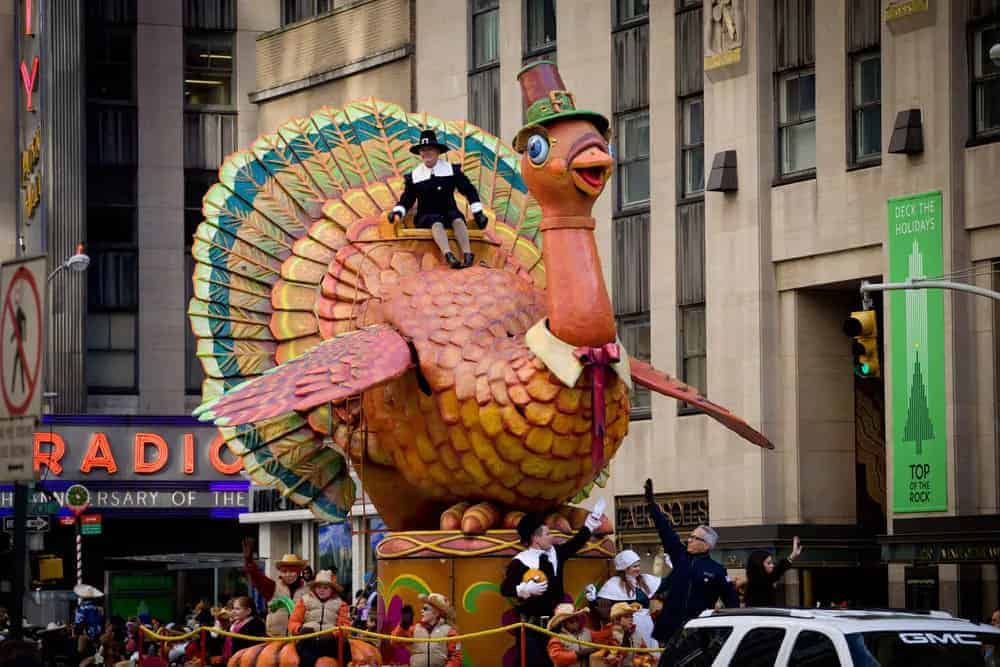 One of the reasons as to why the company is still well-known in pop culture is because of the success of their annual Thanksgiving Day Parade. However, it wasn’t always a Thanksgiving Parade—in fact, it was originally a Christmas parade.

This parade featured the iconic march down to the flagship store but centered around Christmas-themed floats. These elements of the show still remain to this day, but the focus has shifted to be recognized as a primarily Thanksgiving-oriented celebration and include many different celebrations.

What is now known as the first Thanksgiving Day Parade was attended by over 250,000 people, a record-breaking number that became the sole reason as to why they decided to make it an annual occurrence. Thankfully this happened, as now there is a long-lasting precedent and tradition for the Macy’s Thanksgiving Day Parade!

14. Not Everybody Liked The Parade When It Began

Despite the Macy’s Thanksgiving Day Parade becoming a national phenomenon, it wasn’t necessarily liked by everybody. For example, the Allied Patriotic Societies contested the celebration of the event, specifically citing the date as the issue.

This is because they believed that the parade would interrupt normal Thanksgiving Day festivities, something that Macy’s would disagree with. Eventually a compromise was reached, but beforehand the Allied Patriotic Societies had threatened to go to the police if their protest was not recognized.

Because the Macy’s Thanksgiving Day Parade used up a lot of resources, the parade did not happen from 1942 to 1944. The rubber and helium shortages were the specific reason that the parade couldn’t run, with the parade wanting to be sensitive to the shortages due to the excessive rubber and helium that was required to create and inflate the iconic balloons.

The parade’s iconic character-themed balloons were not there the first few years, instead debuting at the 1927 Macy’s Thanksgiving Day Parade. The massive balloons represent different pop culture figures each year, with some repeats being attributed to their enduring cultural significance. When the parade began including these balloons, there was even a balloon race involved!

This race was the result of the manufacturers not knowing how to dispose of the balloons, instead releasing them to the atmosphere and letting them float up until they exploded on their own. Audience members were then encouraged to locate the released balloons, offering a reward of $100 for the recovered balloons.

Despite the success of the original Macy’s location since 1858, the location that we know and love as the Herald Square “flagship location” was not constructed until 1902. This was because it became more lucrative during the previous decades to be closer to midtown Manhattan, giving the company more of an incentive to build more uptown than the previous location, settling on a location at the intersection of 34th St and Broadway.

18. The New Flagship Location Was So Far From The Previous One, They Had To Provide Transportation

Because the Herald Square location was such a large distance from the one in downtown Manhattan, Macy’s provided transportation so people could travel from one store to another. In this instance, the transportation provided ended up being a steam wagonette! Through this service, customers could finally travel easily between the two stores, not having to walk the 20 blocks in-between each location.

For those visiting New York City, it’s no doubt that the flagship Macy’s at Herald Square is a must-do for any tourist. Especially around the holidays, the store becomes incredibly crowded to make way for thousands of people to pour through its doors each day, looking for the best deals and holiday gifts they can find.

It also becomes crowded before the holidays are in full swing due to the Thanksgiving Day Parade, so you’re probably thinking that it makes sense that hundreds of thousands of people would visit the flagship Macy’s location per year, right? Well, what if we told you it wasn’t 500,000 people, but instead 20 million who visit the location on an annual basis? This is a number that can only happen in a tourist destination like New York City, as there is no other store that has numbers quite like that.

20. The Flagship Macy’s Location Was Added To The National Register Of Historic Places

In 1978, the department store would make history by being added to the USA’s National Register of Historic Places being specified as a National Historic Landmark. This new classification would help the store solidify its cultural status, helping it represent not just a worldwide department store, but an icon of American culture.