Skip to Content
Both smartwatches are Wear OS-based smartwatches but beyond that, the Ticwatch Pro is more utilitarian while the Suunto 7 is more for sporty people. 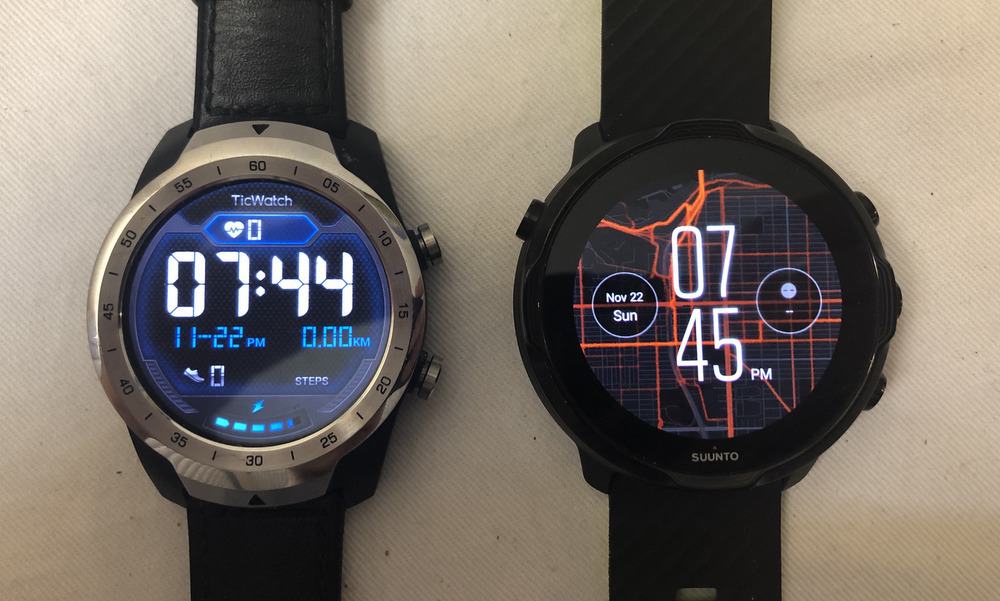 Purely by looking at the appearance of the Mobvoi Ticwatch Pro and the Suunto 7, you’d think that the Ticwatch Pro is the better of the two watches.

It really comes down to how much more “elegant” it looks. Its design is shinier with its silvery metal watch case. It’s one of the few smartwatches out there to also incorporate a metallic rear, where the heart rate sensor is. It also comes with a leather strap with a rubberized bottom.

On the other hand, the Suunto 7 is a bit much less sophisticated in how it looks. My Suunto has a really gaudy lime green accent on a black strap. The watch case is also all black, which is fine, but the amount of plastic on the watch case really doesn’t sound “premium.”

The Suunto 7 is a Wear OS watch and the Ticwatch Pro is also a Wear OS watch. So why is there such a major difference in the price of these two wearables?

The adage, “don’t judge a book by its cover” really comes in play here. The main reason why these two watches differ so much in price is really in whatever hardware and software that’s within these watches. 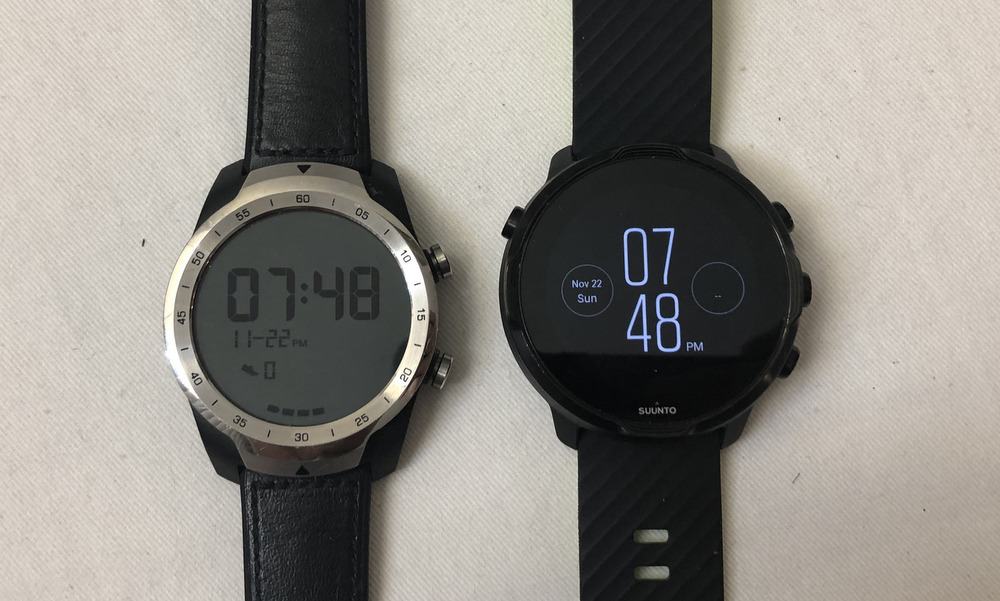 The Ticwatch Pro has a pretty good innovation that really gives it an edge over the Suunto 7, but otherwise, the Suunto 7 has loads more advantages.

The Ticwatch Pro’s dual-layer screen is one of the most innovative ways to save battery life. What Mobvoi, the makers of the Ticwatch Pro, has done is that they’ve put a battery life saving LCD screen over the full colour LED screen.

This allows you to have better battery life because the Ticwatch Pro activates its LCD screen when it’s idle. The Suunto 7 is more typical, having only one full colour LED screen.

Another upside to having the LCD screen on the Ticwatch Pro is that you’ll always be able to see the time as long as there’s ambient light. Whereas with an LED screen, your ability to make out the text on the smartwatch really comes down to how much power the backlight can put out. Luckily, the Suunto 7 fares well even in the brightest of summer days.

That said, battery life for both systems are about the same. Neither smartwatch will last beyond two days.

I have no doubt that the Suunto 7 will win in this regard.

The Suunto 7 has more RAM at 1GB and also the latest version of the Qualcomm Snapdragon Wear 3100.

In contrast, the Ticwatch Pro only has the antiquated Qualcomm Snapdragon Wear 2100 and 512MB of RAM. It’s what I would consider very standard stuff a few years ago, but right now it’s a combination for lag and frustration.

In practice, the Ticwatch Pro can be very frustrating because it’s not very good at multitasking. One thing that all Wear OS smartwatches will do is run system updates in the background. I don’t notice it on the Suunto 7 but it’s very obvious on the Ticwatch Pro because I know that if there’s unresponsiveness and lag but no obvious reason why, it’s probably an update running in the background. 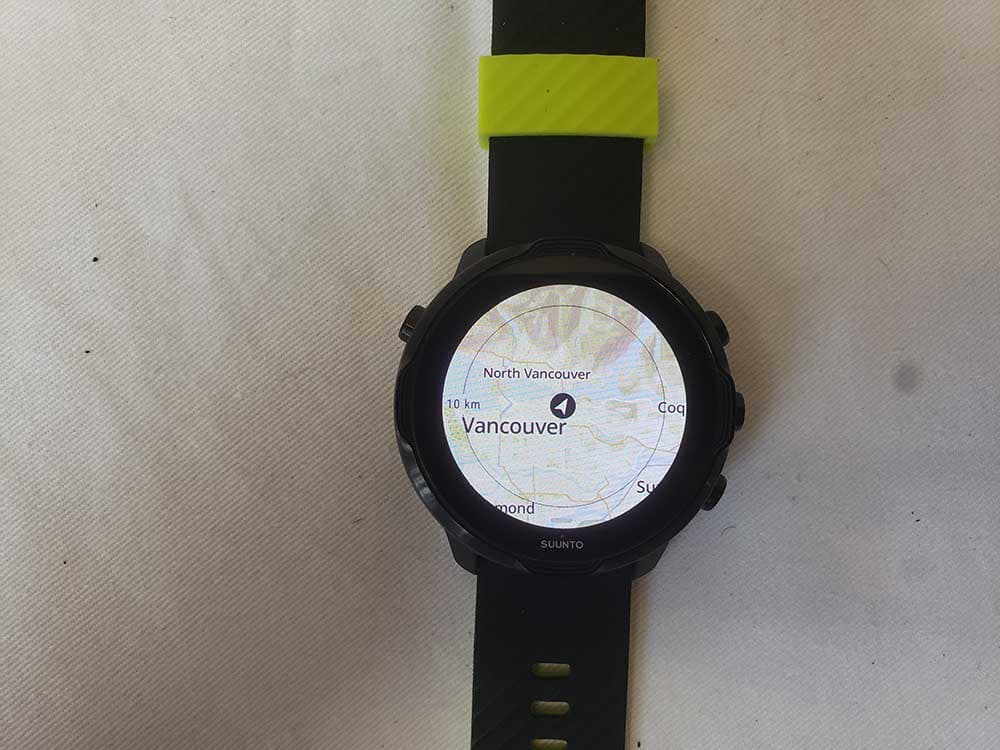 The Suunto 7 has offline maps which the Ticwatch Pro doesn’t. In fact, few smartwatches have it.

The upside is that with Wear OS watches like the Ticwatch Pro and Suunto 7, you can always download Google Maps.

The downside of Google Maps is that it requires you to always have a smartphone with a data connection. So if you go deep in the woods, you might not be able to get access to maps.

This is why I really like the Suunto 7. I think if you’re an outdoors enthusiast and frequently go into unfamiliar forests, waters or trails, you will find the Suunto 7’s offline maps to be amazing. It helps you navigate your way around unmarked trails and that’s a great thing to have.

Text, emails and speech to text

One of the most important things I look for in a smartwatch is the speech to text function, which builds the basis for a pleasant experience with my smartwatch.

A good speech to text system will allow the user to be able to do many things much more efficiently. One such scenario is when a text comes in.

On both platforms, when someone sends you a text or email, you can reply as long as you are paired to an Android smartphone. I paired both phones to my Samsung Galaxy Note 9.

Then, when you reply, you can choose between using a pre-composed reply, sending an emoji, manual inputs (don’t bother, use your phone instead), or use the speech to text service.

Luckily, the speech to text service is backed by Google’s prowess in voice recognition and therefore the experience with it is very smooth. It does have its moment where it spits out erroneous sentences, but compared to its competition, the quality of the transcription ranks at the top. 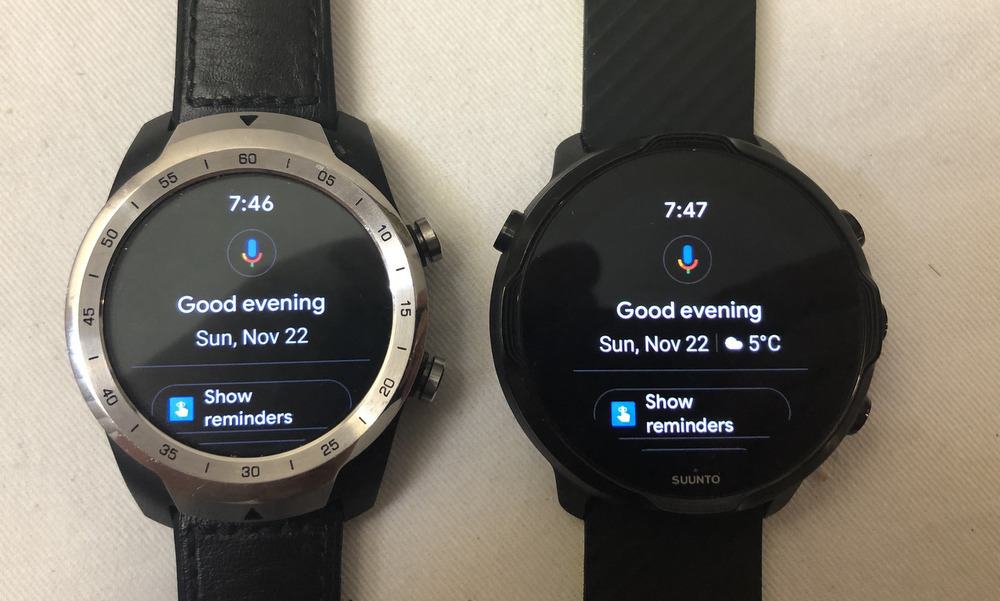 This leads me to the next most important feature to improve productivity — the voice assistant.

The voice assistant is very important because it helps you get tedious tasks done by just telling it what you want done.

Google Assistant is really good. You can tell it to start timers, check the weather for a specific city or day and do calculations. If you asked Google Assistant a random question, it will search the web for an answer.

It really helps that the speech to text system is excellent, which in turn, really helps you get your request fulfilled quickly and accurately. 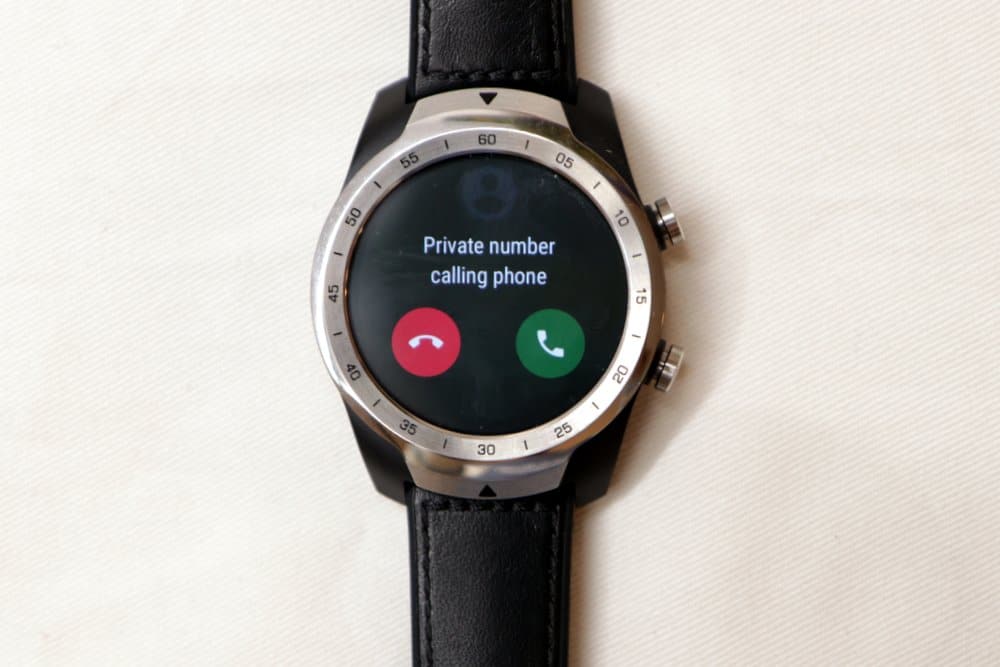 The Ticwatch Pro absolutely wins in this segment because it has a speaker while the Suunto 7 does not.

This is a nice feature to have and is mostly present in higher-end smartwatches. It’s a real pity that the Suunto 7 does not have it because it’s a convenience I’d like to have.

For example, let’s say you are cycling and somebody calls you. On the Suunto 7, you will have to pull your phone out to answer it, whereas on the Ticwatch Pro, you can avoid this and chat with the caller directly on the watch.

Some people have told me how ridiculous this looks, but if you are the type that cares about utility than looks, then you would probably be happier having a smartwatch with this feature than one without it. 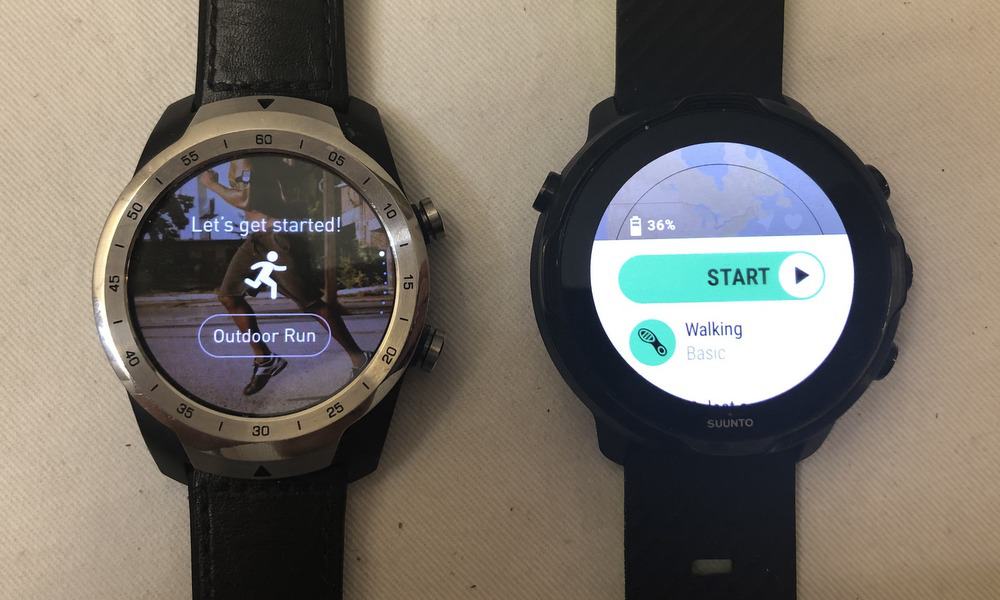 The Suunto 7 is a special Wear OS smartwatch in that Suunto built it in order to cater to sports enthusiasts.

I really, really like the Suunto app that comes with the Suunto 7. Whereas the Ticwatch Pro comes with the standard Wear OS sports app, the Google Fit suite. Both offer varying degrees of fitness tracking capabilities.

The Suunto app is superior to the Wear OS’s Google Fit suite because it offers better analysis of your workouts. For example, the Suunto app will tell you how effective your workout is and how much rest time to schedule before your next workout.

The Ticwatch Pro’s Google Fit is much more rudimentary in what it can offer. You do get basic details such as location data, speed, distance, heart rate data but when compared to the Suunto 7, you don’t get the in depth analyses.

Just a little note — the Ticwatch Pro is not rated to be taken underwater. Ironic, given that the less “pro” Ticwatches such as the E2 and S2 are all perfectly fine underwater. If you intend to buy a smartwatch for swimming, you would do well with the Suunto 7. It’s the ultimate fitness tracker.

Unfortunately, both smartwatches do not offer any sleep tracking abilities. Sleep tracking has become something that’s so common in watches of every brand from Garmin to the Fitbit Versa that only having activity tracking on both devices is a bit of a let down, especially on the premium watch that is the Suunto 7. 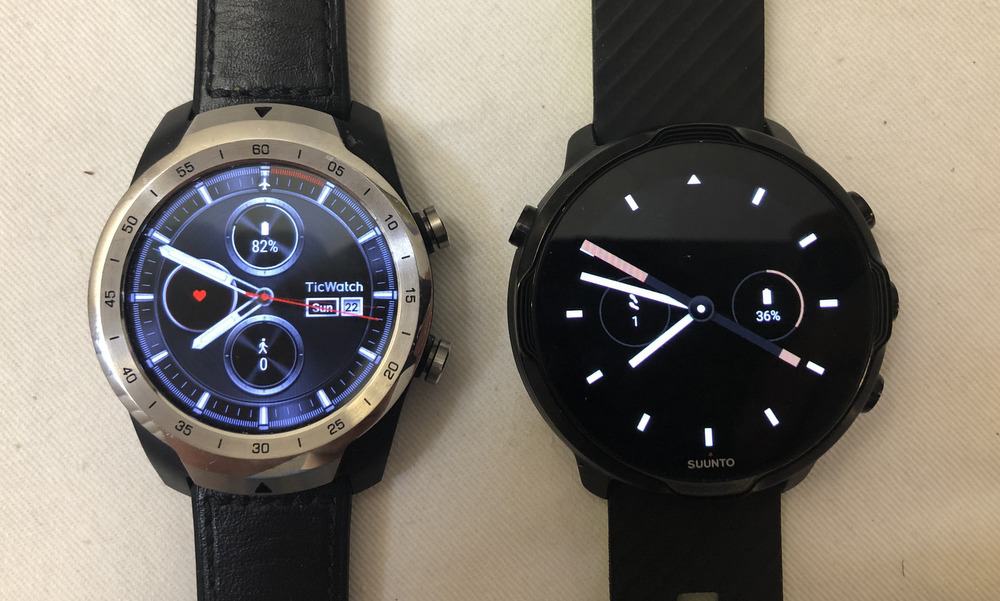 The Ticwatch Pro really looks like a more sophisticated smartwatch as compared to the Suunto 7. Unfortunately, that’s really where it ends.

The Suunto 7 has more advanced hardware and better software for sports enthusiasts. Offline maps and the Suunto app are some examples, in addition to the higher-end RAM and processor.

That said, you will be paying a premium for the Suunto 7’s advanced features and not everyone can benefit from it.

In my opinion, I would strongly consider the Garmin Fenix 6 because it’s an excellent activity tracker, fitness tracker and also has sleep tracking integrated into it. The higher tier Garmin Fenix watches have offline maps too which is excellent.

If you don’t want to spend so much on your smartwatch, and really want something that’s much more geared towards everyday use, then you could stick with a WearOS device or the Fitbit Versa smart watches.