Skip to Content
The Ticwatch Pro 3 is the best jack of all trades out there but the Garmin Fenix 6 is a true specialist in sports. 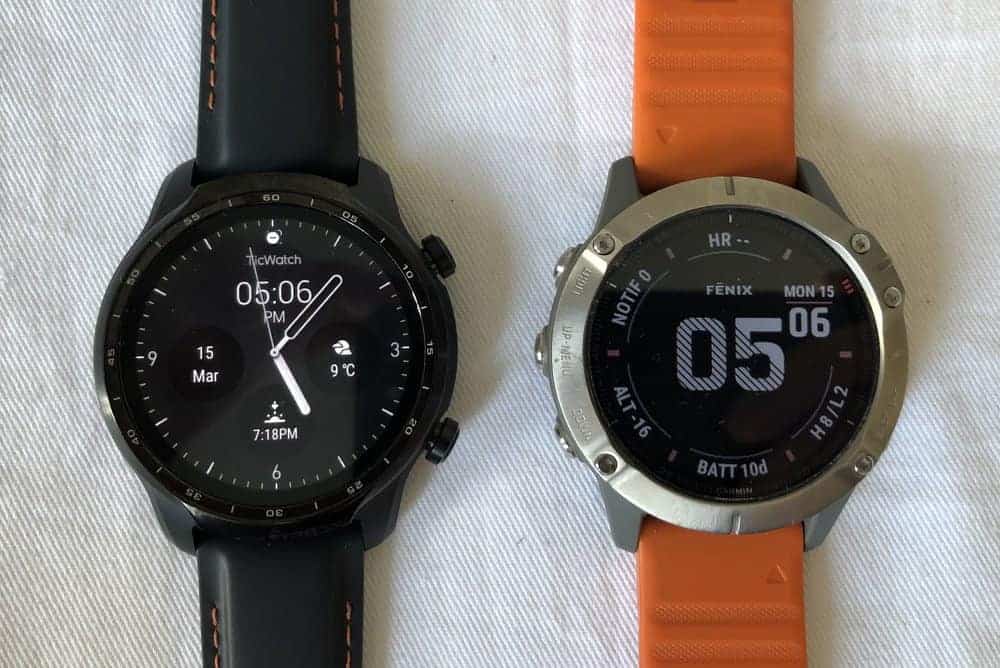 Yesterday, I went out paddling and realized I didn’t wear my Garmin Fenix 6.

I was completely in dread because the Garmin Fenix 6 has been the best companion available for all my outdoor activities.

Not having it felt a bit like the discomfort of not having your phone with you. That feeling of nakedness and emptiness.

But few people have the luxury of owning multiple watches and I am also a big fan of the Mobvoi Ticwatch Pro 3 GPS because it’s an amazing watch. So which one should you choose? 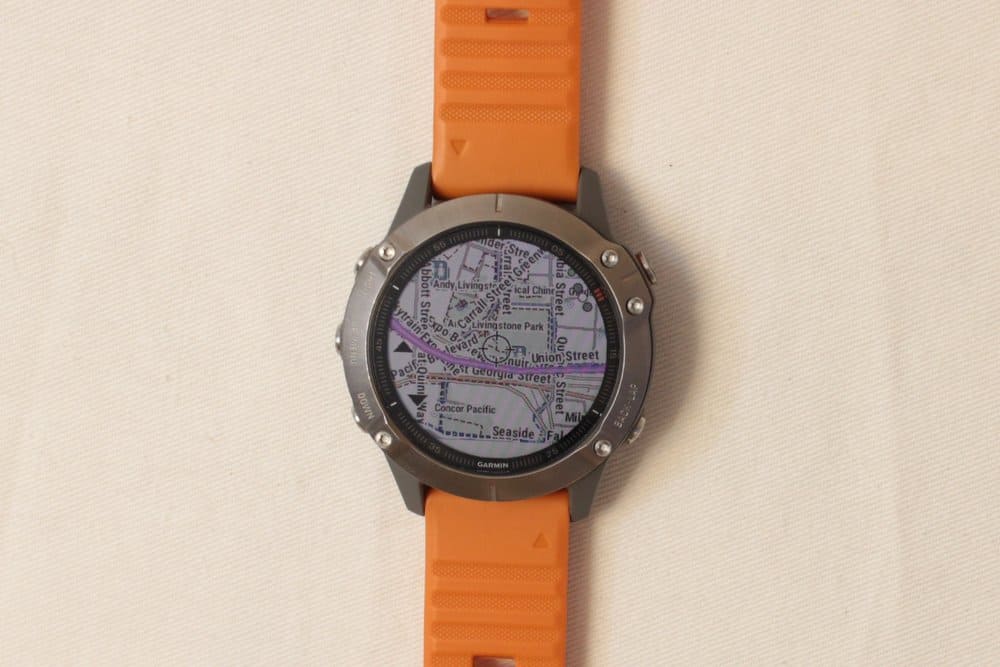 On the topic of why I missed my Garmin Fenix 6… I think it comes down to how good the watch is when you’re doing sports in a place that you aren’t familiar with.

If you buy the upgraded Garmin Fenix 6, you’ll have access to its offline maps feature. It’s worth the extra cost.

I was out on the water and it has been many months since I paddled in those waters. What I really wished I had was a map so that I could make out which island was the one I wanted to go to.

This brings us to one of the most important features of the Fenix 6: offline maps.

It’s quite difficult to appreciate offline maps when you could say, “Why not just use Google Maps?”

The reason for this is because Google Maps is on your phone. In the case of the Ticwatch Pro 3 GPS, which runs on Google’s Wear OS, you could download Google Maps as an app and that’s great, but it’s a pared-down version of the phone app.

And worse of all, you’re always dependent on having a data connection, which means having your phone nearby. But that wouldn’t work if you are deep in the woods or far from civilization which is where I expect most Garmin Fenix 6 users will be once in a while.

The Garmin Fenix 6’s offline maps is really good. I like the convenience of having an offline map on my watch that is also capable at finding routes in some cases.

The Garmin Fenix 6 is prepared for all manner of sports and outdoor activity. This is important if you are the type to go on long expeditions, marathons or anything that lasts for hours and hours.

With any other smartwatch, I would be very worried that the battery life wouldn’t last long enough for me to be able to track my workout all the way.

However, this isn’t a problem with the Garmin Fenix 6. I know for a fact that I have recorded workouts that are multiple hours long and it still had a lot of battery life left. This includes some use of the offline map feature.

The Ticwatch Pro 3 GPS does actually have one of the best battery life among Wear OS smartwatches. It does this by using two screens, one full-colour LED screen and another that’s monochrome and power saving. The latter screen is used as much as possible to avoid the battery hog of the colour screen.

But if you want battery life that lasts over a week, then there’s only the Fenix 6. The Ticwatch Pro 3 GPS lasts about half a week, then requires a charge.

The same proportion of battery life extends to exercise tracking. 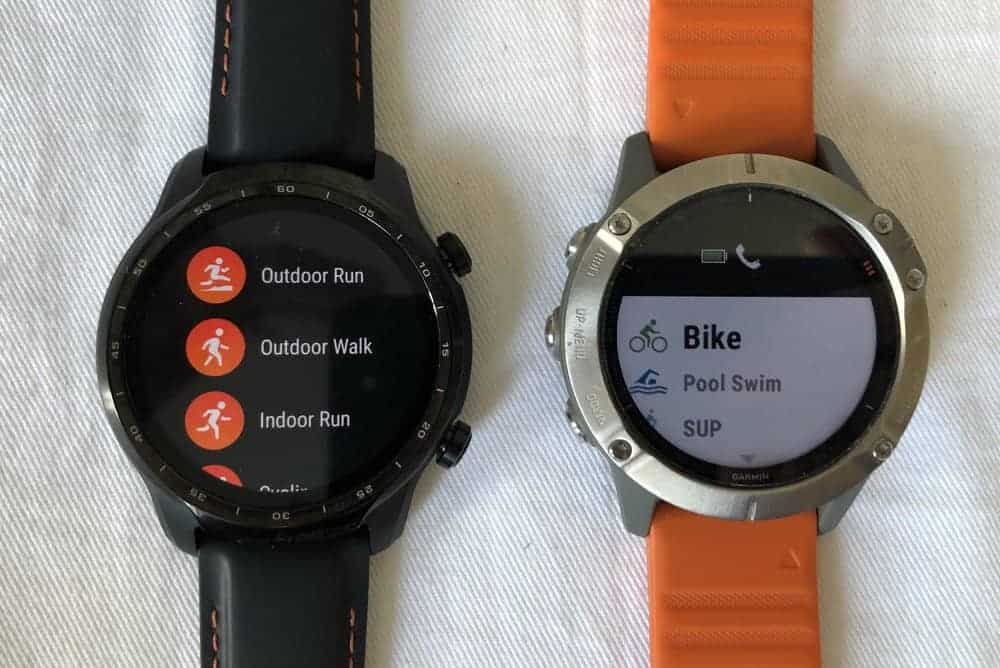 Blood oxygen saturation (SpO2) measurement? Both have it.

Noise monitoring? Uh, I guess the Ticwatch Pro 3 has this advantage, although the app isn’t very good. 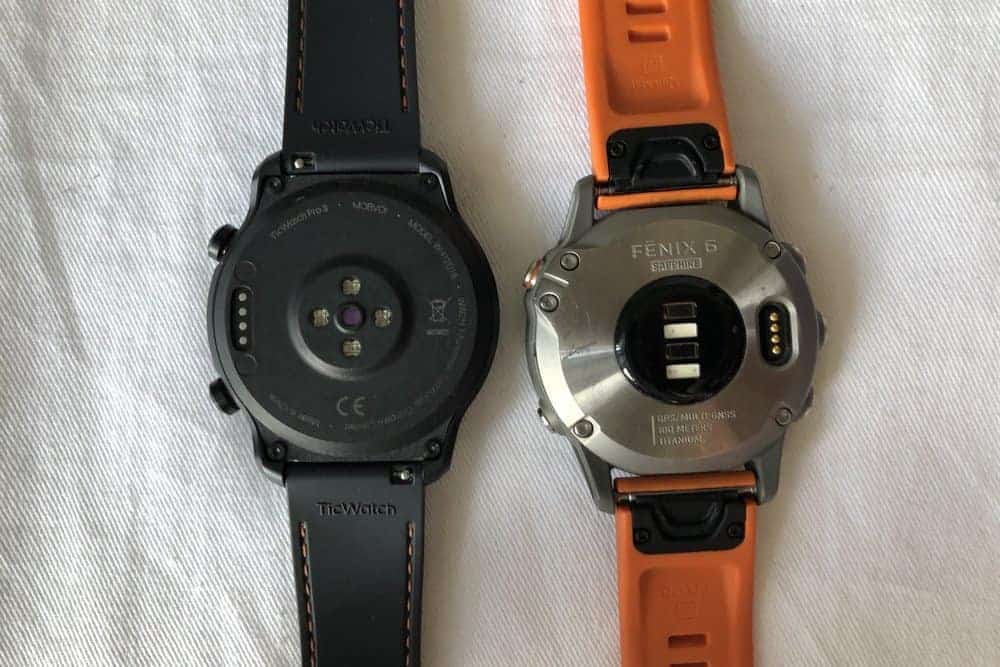 Both have their own apps for fitness tracking too. Both have a sleep tracking and analysis feature, step tracker and other data. But the Garmin Connect app is so much better than the Mobvoi app (Mobvoi is the manufacturer of the Ticwatch Pro).

This extends down to the fitness tracking app on the smartwatch.

For example, if like esoteric sports that almost no one does, chances are that you’ll find it on the Garmin Fenix 6 rather than the TIcwatch Pro 3.

For example, if you like the cool and new sport of stand up paddleboarding, you’ll find it on the Garmin Fenix 6 but not on the Ticwatch Pro 3’s TicExercise.

It kinda sucks too that you’ll have to use TicExercise if you want to have your fitness data (such as time elapsed, heart rate, speed, etc.) displayed on the power-saving LCD screen. If you used Google Fit, which has a larger selection of workouts, you won’t see any of the exercise data on that screen.

Then comes the analysis. If you want to know whether your workouts have helped you improve your anaerobic or aerobic ability, you’ll see it on the Garmin Connect. The Garmin Fenix 6 will also suggest how long you should schedule for recovery.

In fact, if you are looking to join a race anytime soon, the Garmin Connect can help you plan your training, which the Ticwatch Pro 3 can’t. 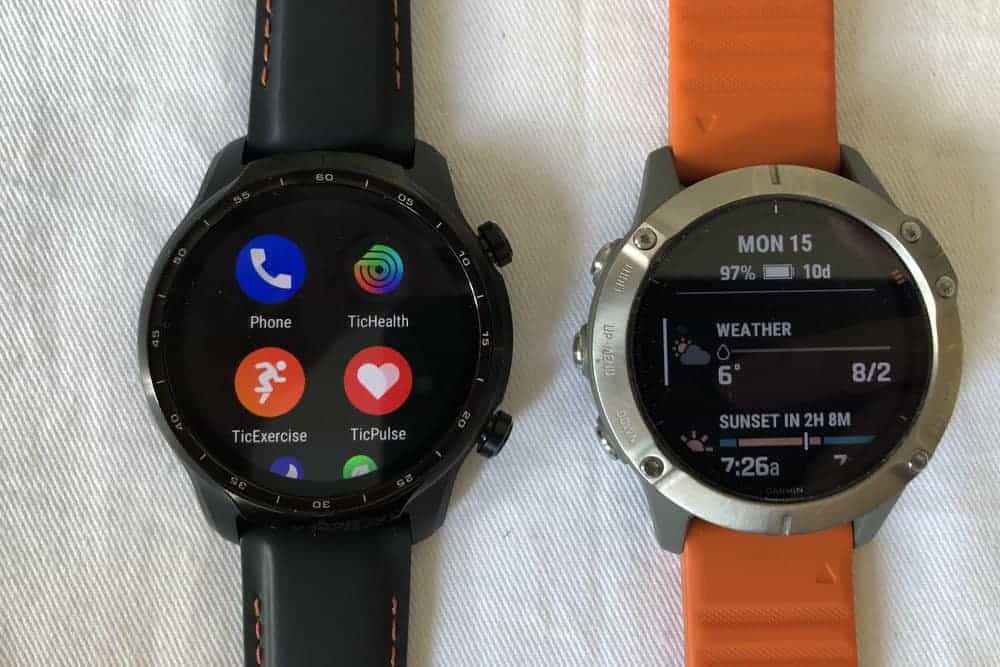 The Garmin Fenix 6 is a huge watch. It looks like a brute with its orange strap and titanium watch case. Luckily, you can get it in other colour combinations. The downside is that it’s just so huge and not very comfortable when worn overnight for sleep tracking.

Whereas the Ticwatch Pro 3 is pretty modern looking. It’s all black and has a nice black silicone strap with red stitching, a bit like the more premium steering wheels on modern cars. It’s slimmer and definitely not as intrusive to wear overnight.

On the topic of daily use, the Ticwatch Pro 3 is a pretty useful watch because it has a speaker and microphone, which the Garmin Fenix 6 doesn’t. Did I also mention that the Garmin Fenix 6 does not have a touch screen and all interaction is done through the five buttons surrounding the screen? It’s not very user friendly until you get the general gist of how those buttons work, a few months into ownership.

On the Garmin Fenix 6, that’s the end of it. You’re heading to your phone if you want to chat.

On the Ticwatch Pro 3, you can talk to the caller directly on your phone. It’s a convenience that I really like when I’m out and my smartphone is tucked somewhere deep in some bag.

It might seem pretty ridiculous, but it’s a convenience that’s really nice to have. Think of it this way: you’re on a kayak and your phone is tucked deep in your drybag. A potential client calls you and you NEED to answer the call. In situations like this, you’d be glad you were able to speak immediately via the Ticwatch Pro 3. 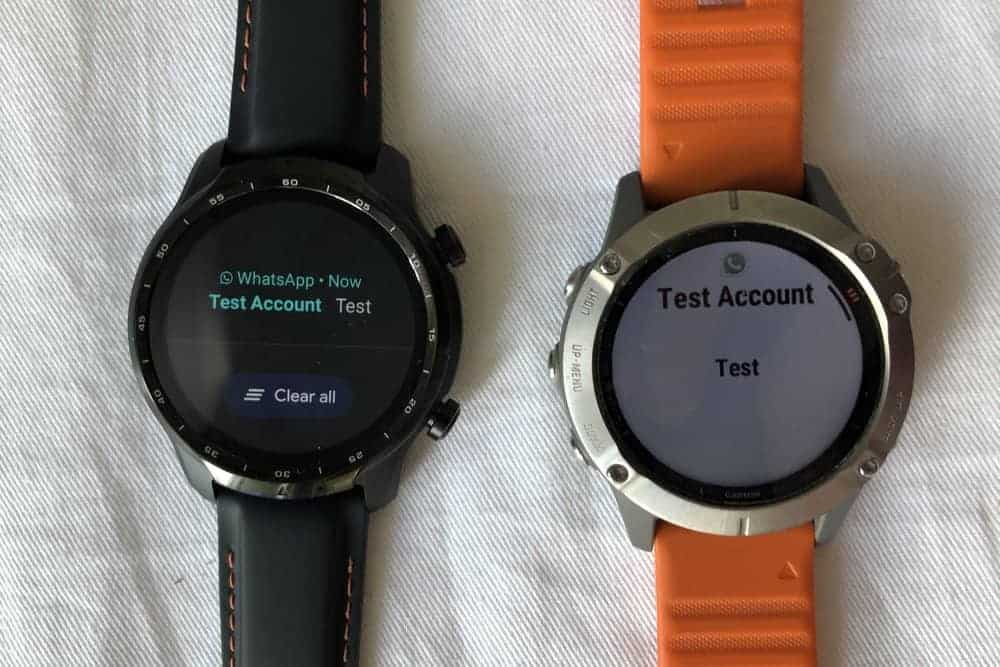 So what happens when a message or email comes in?

On the Garmin Fenix 6, you can reply to these messages with one of the customizable replies that you have set in the Garmin Connect app. If you want to say something more complicated than “Yes” or “Call you later,” you can’t. 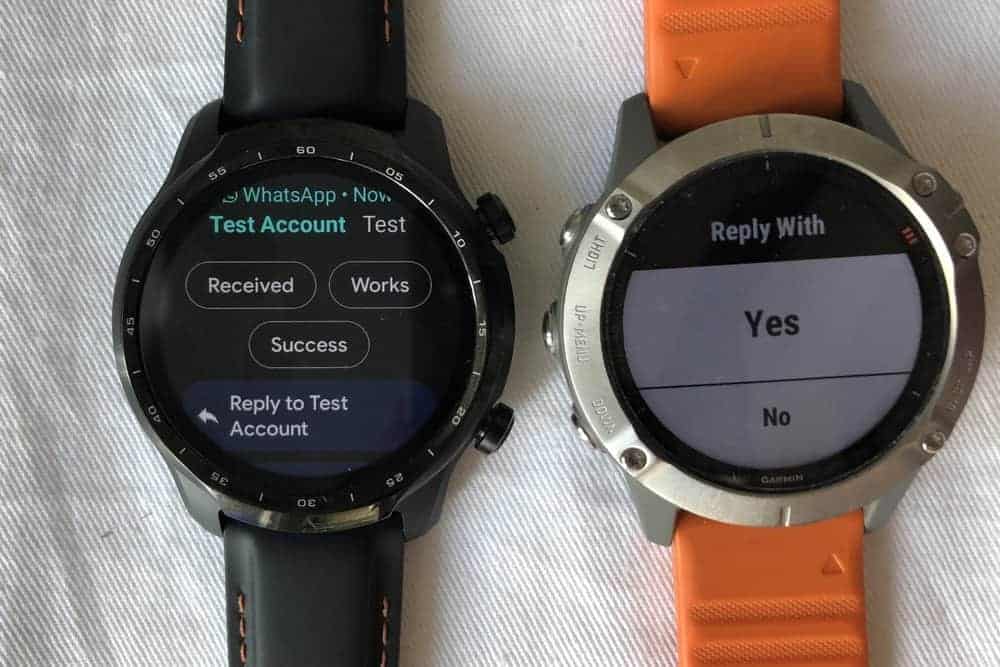 The opposite is true of the Ticwatch Pro 3. If you want to send a complicated custom message, you’ll probably do better with the Ticwatch Pro 3’s excellent speech to text system. Why is it excellent? Because it’s backed by Google’s transcription service which is so good, it can even put in the punctuation for you. 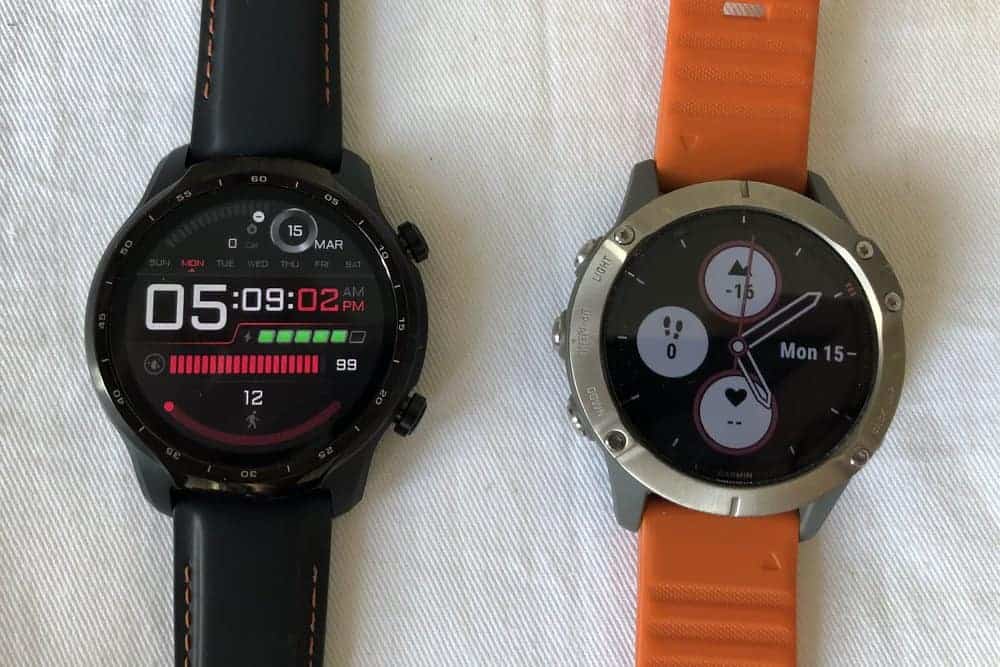 If you want a general purpose watch, get the Ticwatch Pro 3.

I’ve long said that it’s one of the best smartwatches out there for general use and definitely the best Wear OS smartwatch so far.

The Garmin Fenix 6, especially the Fenix 6 Pro and upgraded versions that have the offline map, command a real premium. But it’s really much better equipped than the Ticwatch Pro 3 is for your next big expedition or as a tool to help improve your fitness.