Skip to Content
The Ticwatch Pro 3 is a great productivity enhancement tool while the Suunto 7 is a fantastic sports companion. 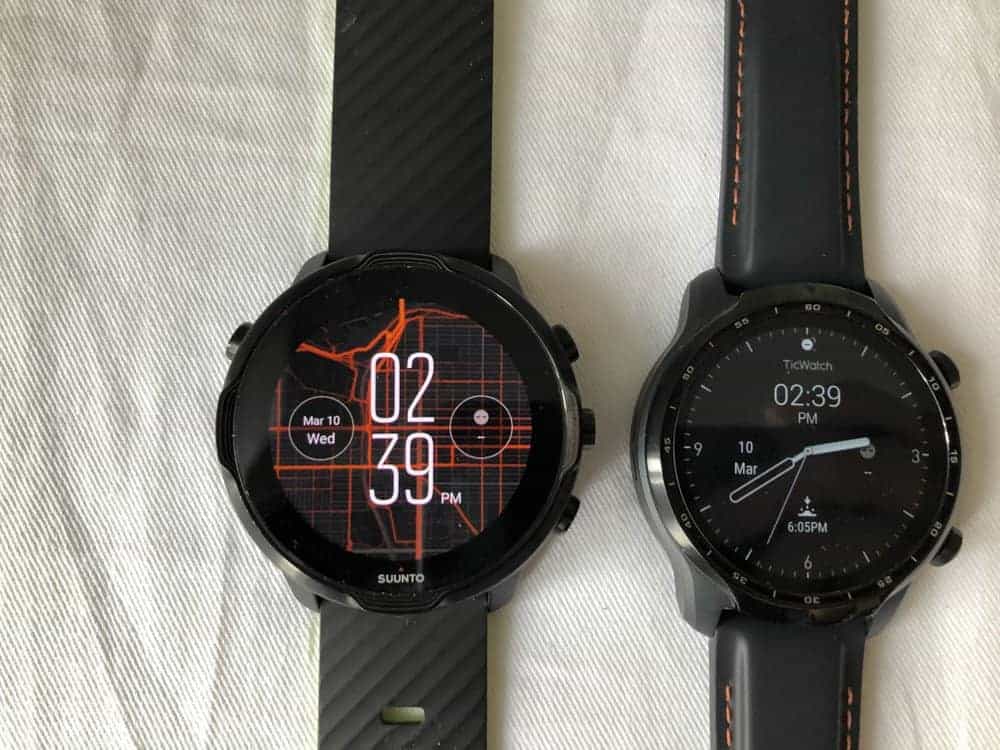 You’d never think the Suunto 7 is a more expensive smartwatch than the Ticwatch Pro 3 by just taking a look at it.

But then again, we shouldn’t judge the Ticwatch Pro 3 vs Suunto 7 based on its cover.

But why does the Suunto 7 not feel like a premium smartwatch?

In my opinion, it’s because it’s very “artificial.” What I mean by that is that it really has much more plastic and rubbery surfaces as compared to the Ticwatch Pro 3 GPS. It’s also bigger and has five buttons which go against the trend of miniaturization. If we look at Apple iPhones, they’ve been getting rid of buttons over time and that can be a cue that having many buttons isn’t in vogue.

The Ticwatch Pro 3 looks a lot more modern with its leather strap and red stitching. Its all-black surface also makes it look very elegant and lastly, it’s a lot slimmer.

But let’s go beyond judging these watches by their covers. 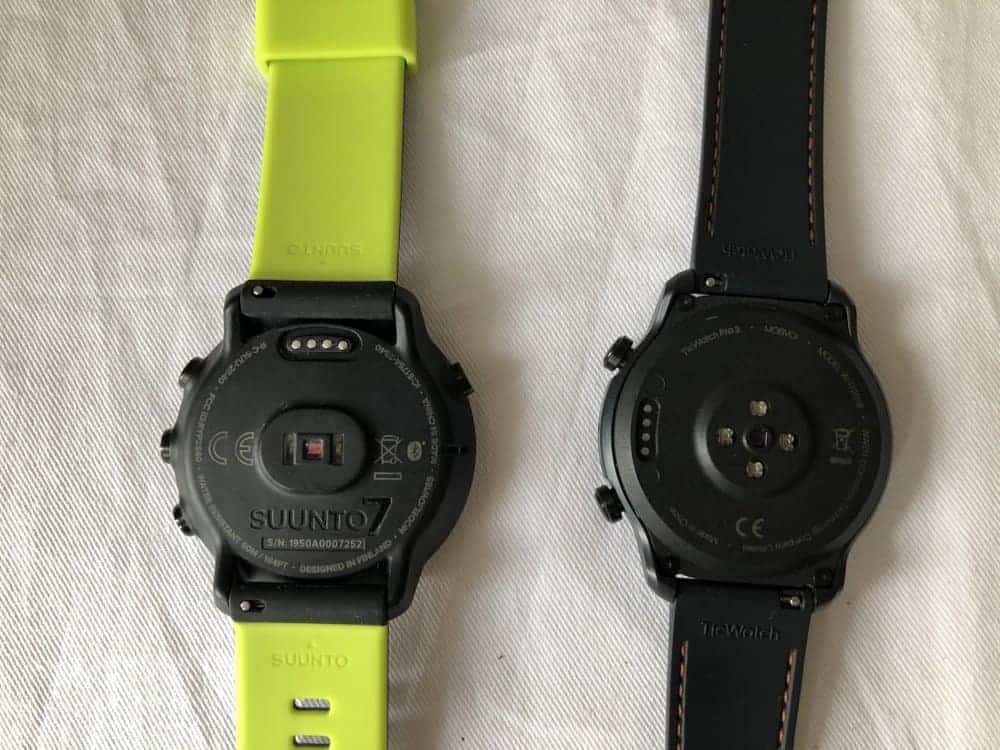 OK, so hardware is pretty important because it gives you an idea of how well it would perform.

I am happy to say that both smartwatches are really speedy.

Every time I receive a Wear OS smartwatch, the first thing I look out for is the hardware because it would determine my experience with the Google’s Wear OS. If you see any smartwatch with the Qualcomm Snapdragon Wear 2100 or 512MB of RAM, you should be aware that there will be instances of lag.

Both have 1GB RAM so that means you’re able to get things done quite smoothly. There’s no lag on the Suunto 7 and therefore, even less so on the Ticwatch Pro 3. This is most obvious when you summon Google Assistant. On lesser systems, Google Assistant can take a while before it’s ready to take your query. 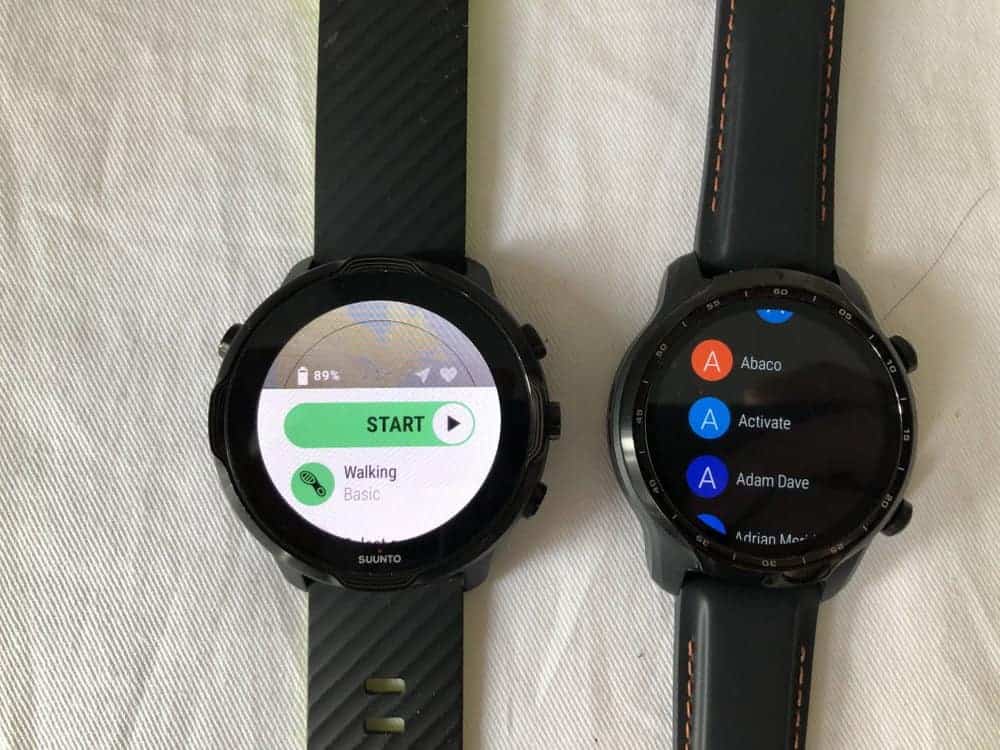 The Wear OS is a great operating system that has seen many improvements over the last year.

What I like about the operating system that powers both smartwatches is that the Wear OS offers a dynamism that’s not available on other smartwatches’ OS, except Apple’s WatchOS.

The Google Play Store is large and you can find many apps on there. What I really like is Google Maps, Google Keep and Google Translate. They are really convenient to have.

Another great thing about the Wear OS is that you can use Google Assistant. I think having Google Assistant on your smartwatch is very convenient because you no longer have to keep your phone nearby in order to ask Google to start a timer or check the weather. What I like to do is to set a timer for laundry and after 40 minutes (and me forgetting I am doing laundry), the watch will vibrate and remind me to go pick up the laundry. Really helpful, especially if you’re the type to leave your smartphone far away from yourself. 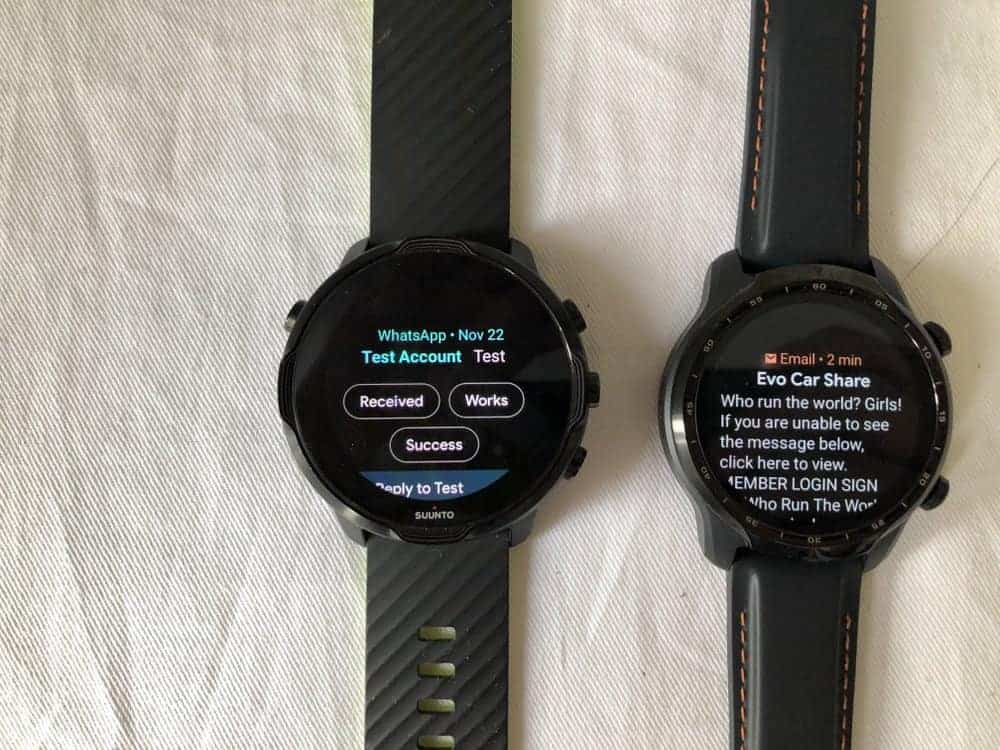 The other aspect which I like about the Wear OS is the ability to reply to messages reliably.

This really helps you when you are out and about and find it inconvenient to reach for your smartphone, such as when you are exercising and need to quickly reply to a message.

Granted, this is only possible if you are paired to an Android smartphone.

So, when a message or email comes in, you are able to read a snippet of it. For messages, it’s mostly enough but for emails, the snippet can be a little too short. Nonetheless, if you do decide to reply to those messages, you can either used a canned response or you can reply using the speech to text system.

The speech to text system is very accurate and very intelligent. It knows where to put punctuation which is amazing. It’s hard to appreciate how good the system is until you’re stuck with dealing with a lesser system which gets it wrong half the time. Then you’ll just stew in the frustration of having to deal with re-creating the message again. Luckily, this doesn’t happen often with the Wear OS.

Note: you can also reply using the keyboard or handwriting function but those are super tedious and I usually just go straight to my phone. 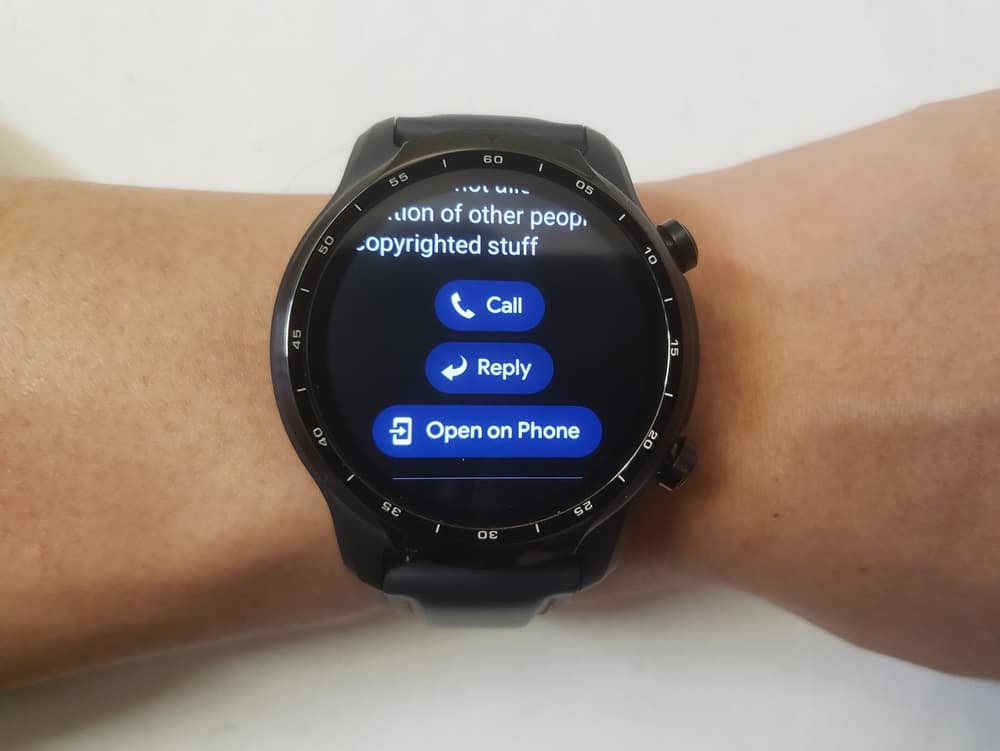 Here’s a point of difference between the Ticwatch Pro 3 and the Suunto 7.

The Suunto 7 doesn’t have a speaker. It has a buzzer that goes beep.

The Ticwatch Pro 3 has a speaker and it unlocks its ability to make phone calls.

I think it’s pretty important because what has traditionally separated an entry-level Wear OS device with a premium counterpart is the ability to receive and make phone calls. But this doesn’t stand true for the Suunto 7.

Whereas, on the Ticwatch Pro 3, you can make calls and receive calls which therefore fits my idea of a “premium” Wear OS smartwatch. The sound quality is just OK. It’s not something you want to use for serious phone calls. It’s convenient, though, to be able to answer a call immediately when your phone is nowhere to be found. 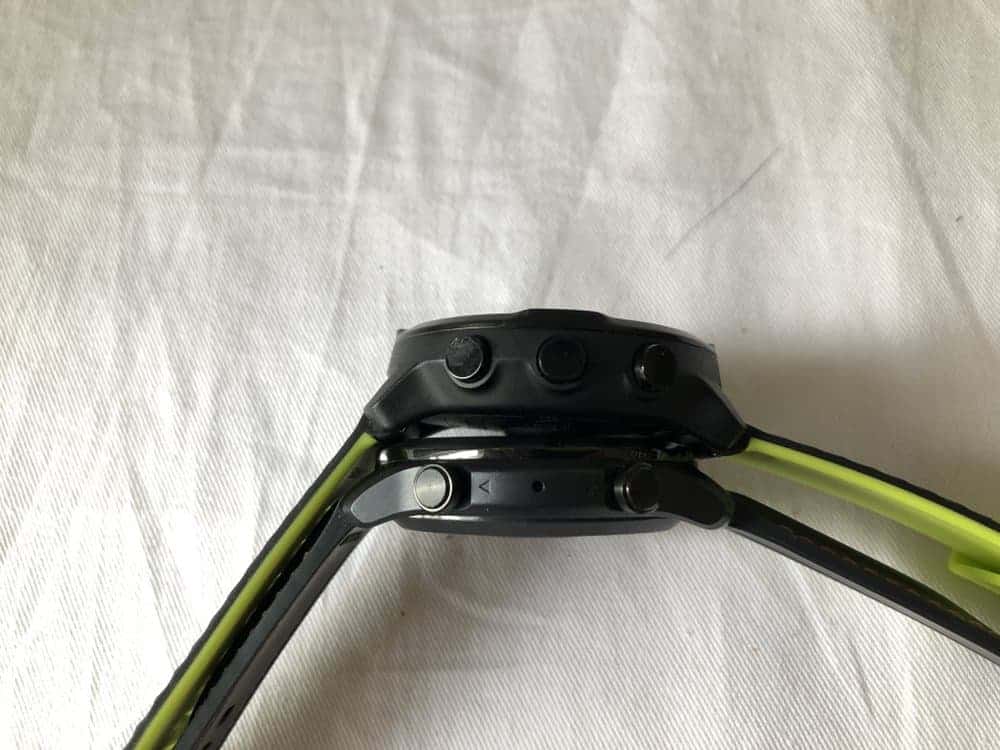 I might have thrown shade at the number of buttons on the Suunto 7 but I’d say it’s only unpleasant from an aesthetic perspective.

Having five buttons really makes things very convenient. For example, when you are out exercising, the last thing you want to do is to use touch gestures to activate some functionality. With the five buttons on the Suunto 7, you can change screens, play music, skip tracks and other tasks without having to look at your screen. The tactic feeling of pressing a button is very useful when you can’t look at your screen but you want something to happen.

No such luck on the Ticwatch Pro 3, though. Its two buttons offer some convenience but because one button is always reserved as the home button, the other button’s functionality is always limited to less granular actions. 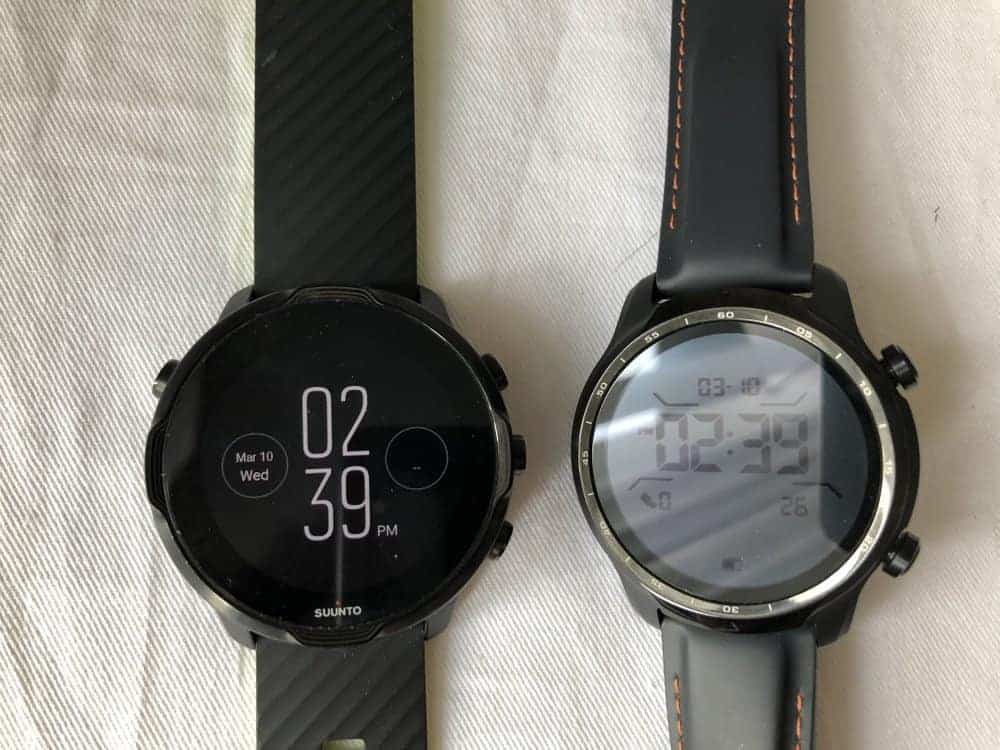 The battery life of the Ticwatch Pro 3 is one of the most amazing out there. For a Wear OS watch that’s meant to be worn 24/7 (for sleep tracking), the Ticwatch Pro 3 lasts almost as long as a Fitbit Versa smartwatch, which is amazing.

What really helps the Ticwatch Pro 3 have such legendary battery life is its new, power-sipping Qualcomm processor and also its dual screen. A monochrome LCD is layered on top of the full colour LED screen. The latter is turned off for as long as possible to conserve battery.

There’s no such fanciness with any other smartwatch, including the Suunto 7. 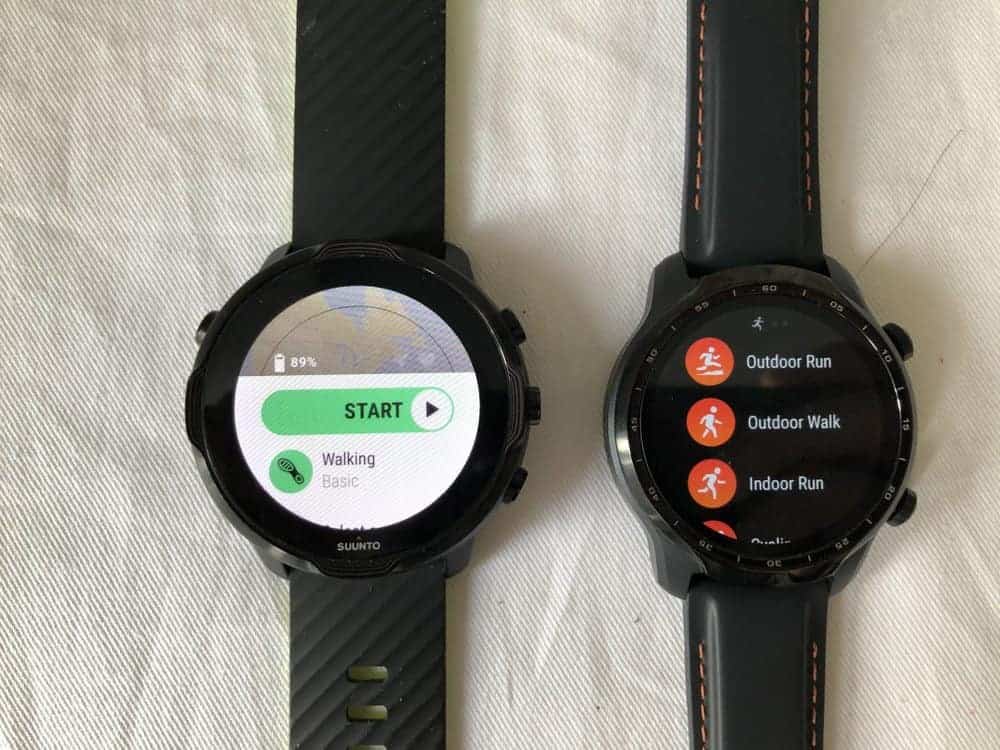 One big difference between the Suunto 7 and the Ticwatch Pro 3 is the proprietary apps they come with.

The Suunto 7 comes with the Suunto app which is a powerhouse of exercise logging. You also get offline maps.

The Suunto‘s app has many choices of exercises that you can track and after each workout, you’ll be offered analysis that speak to the intensity of the workout and how much recovery time should factor in.

Whereas the Ticwatch Pro 3 comes with its Tic-something suite of apps. So, TicExercise to track workouts, TicZen to track stress and TicHearing to track noise levels.

Comparatively, TicExercise has very few workouts that you can pick from, which is why you’ll see me cycling on water in some of my workout logs.

The Ticwatch Pro 3 is also able to track SpO2 levels, which is bloody oxygen levels. It’s very much in vogue these days to track this metric but I honestly don’t know how useful it is. The Suunto 7 can’t.

Both smartwatches are suitable to be taken swimming, so that’s good. 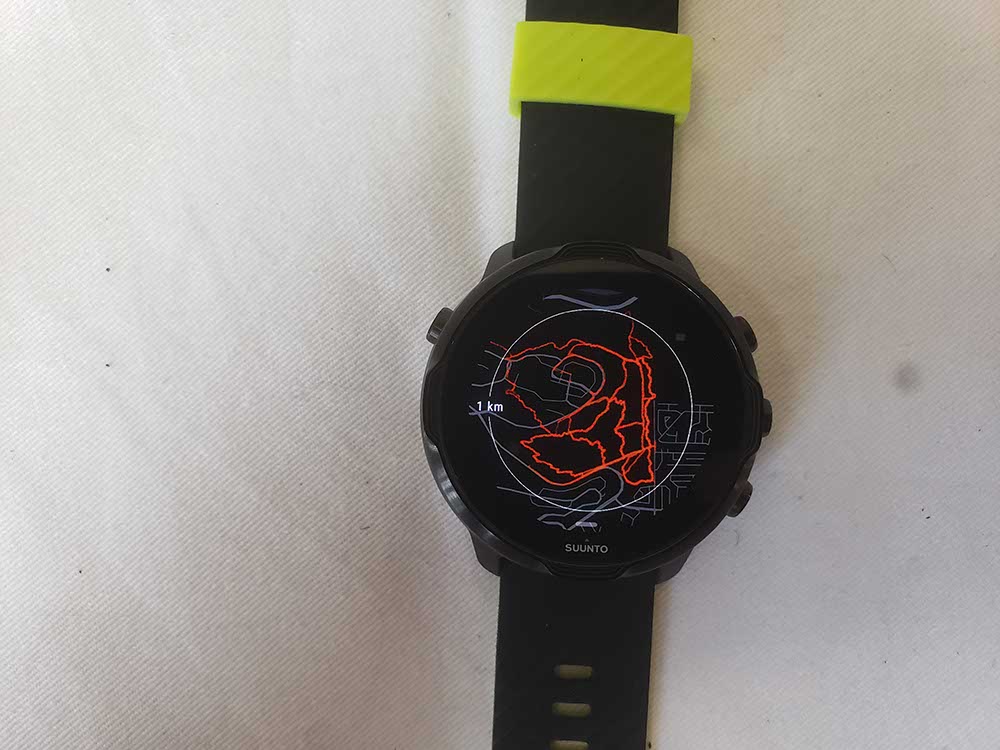 The most important feature that really separates the Suunto 7 with the Ticwatch Pro 3 is its inclusion of offline maps. I think this really makes the biggest difference if you are an outdoors enthusiast.

Imagine if you are deep in the woods and need to find a way through the woods. Or if you are out in the open ocean and need to find your way back. These scenarios are some of which I find it really useful to have an offline map which will always be available, conveniently on your wrist, and doesn’t depend on a data connection.

I think this feature is very much worth it. 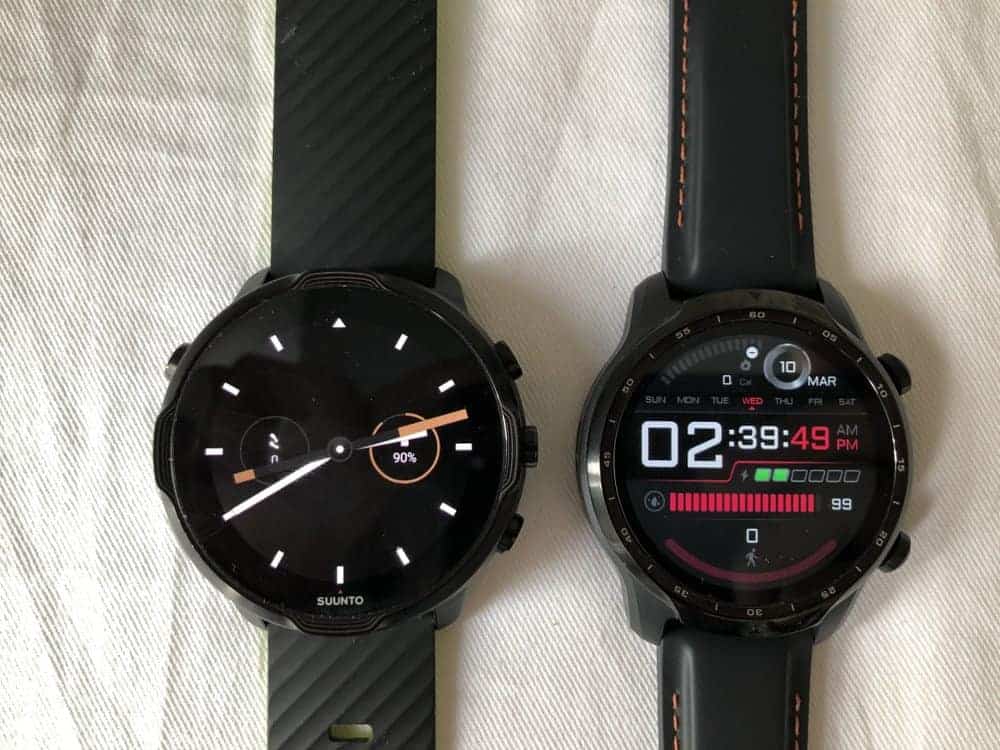 The main difference between the two smartwatches is the market they’re aimed at.

You’d buy the Suunto 7 if you are looking for a smartwatch that can help you improve on your performance.

For most people, the Ticwatch Pro 3 offers the best bang for buck. But for the few outdoors and workout analysis enthusiasts, the Suunto 7 is amazing.