Skip to Content
Place you bets for the races as we take a close look at derby hats showcasing its rich history, who wore them, how is it worn and styled and some variations of its design and name.

Derby hats are synonymous with class, style, and dignity, but that was not always the case. They have a history steeped in a healthy dollop of practicality. They are known by a myriad of other names and worn by people on many continents.

A derby hat is a hard, stiff hat with a rounded crown that resembles a bowl. It has a narrow brim which has a slight upward curl. Derby hats are usually made from wool felt, fur felt, or polyester. They are tight-fitting hats that are not easily dislodged from the head.

Derby hats have interesting origins and were influential in millinery fashion for many years. 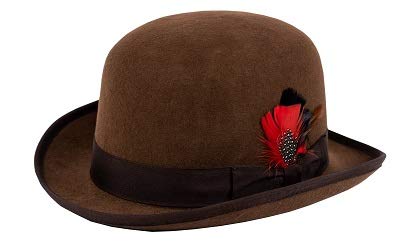 Derby hats are hard hats with a solid bowl-like crown that usually measures five to seven inches, depending on size. There may be a ribbon attached around the crown, usually in the same color as the hat. The brim is narrow and curved upwards.

The curve is known as the d’Orsay curl and is attributed to Alfred d’Orsay, a French dandy known for wearing his hats with tightly curled brims.

The hat is covered in wool felt and the pricier options are in fur felt. In modern times polyester is also used to cover derby hats, and a lining protects the inside of the crown. Popular colors are black, brown, and olive green.

When Were Derby Hats Designed?

In 1849 Lock & Co, the world’s oldest hat shop began manufacturing and selling the derby hat. The story goes that the first earl of Leicester, Thomas Coke, approached the hat company to manufacture a hat for his gamekeepers.

The gamekeepers complained that their current top hats were constantly falling off as they rode their horses through the woods. The gamekeepers wanted a hat that could not be easily brushed off by low-hanging branches.

It is thought that Lock & Co commissioned Thomas and William Bowler, their chief hat makers, to produce a design that fitted snugly on the head. They put their minds to it, and the derby hat was born.

Some people say that Edward Coke, the earl’s younger brother, came up with the design, and the Bowler brothers refined and implemented the production of the hat. The hat was a roaring success, and gamekeepers at Holkham Hall, the earl’s residence, still use the derby hat to this day. 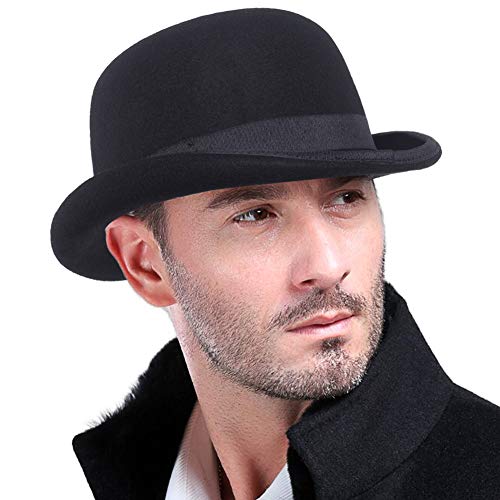 Initially, the derby hat was worn by working-class people. It was useful in keeping smog and soot off their heads in the dirty smoke-filled English cities. It did not fall off easily during manual labor or when the wind blew.

As mentioned above, the derby was designed as a practical hat. Further evidence of its usefulness was shown when polo players adopted the hat as a hard hat to wear while riding their horses in the frenetic game of polo. The derby hat stayed on their heads and protected their head from strikes with an ill-directed polo ball.

Polo has always been an elite sport, and because polo players began wearing the Derby hat, it soon became adopted by the British elite and businessmen.

In the 1800’s derby hats even became part of the uniforms in many European police and military units.

What Are Other Names For The Derby Hat?

The derby hat has many monikers. In the United States, the term derby hat is used. The name derby hat arose in England, where racegoers frequently wore these hats to watch the horse derby.

A horse derby refers to a race run by three-year-old horses over a flat stretch of ground. The 12th Earl of Derby initiated this form of racing.  When horse derbies became elevated to the ranks of entertainment for the elite in the US, racegoers were encouraged to wear formal morning dress. Men wore Derby hats to the races, and the name stuck as the official name for Derby hats in the US.

In Britain, it is mainly called a bowler hat after Thomas and William Bowler. In Leicester and surrounding counties, it is known as the Coke hat after William Coke. Lock & Co hat manufacturers still refer to this hat as the Coke.

The gamekeepers at Holkham Hall called the Derby hat a BillyCoke hat. In typical English fashion, the name was changed to a Billycock hat. However, these terms have become less popular, and referring to your Billycock might not be understood correctly in today’s English usage.

Derby hats are referred to as bombins in Bolivia and are worn there by women. The legend of their translocation to such a far-flung continent is a diverting tale. A local shop imported derby hats to sell to British rail workers. Unfortunately, when they arrived, they were all small in size. The innovative shopkeeper remarketed them to Bolivian women.

Businessmen continued to wear derby hats until the 1970s, but the custom of hat-wearing declined after this. The elite still wear derby hats when attending fashionable outdoor events such as the Kentucky Derby or Churchill Downs horse races.

Racegoers usually choose black derby hats, although occasionally, a brown or blue hat may be seen. Hipsters may decide to wear derby hats, depending on their particular style. These days both men and women wear derby hats.

Gamekeepers of old were fond of wearing a feather tucked into the ribbon on the brim. This fashion spread to other wearers and persisted for many years. This practice has gone largely out of style, and plain black derby hats are considered the most elegant.

Where Can I Buy A Derby Hat? 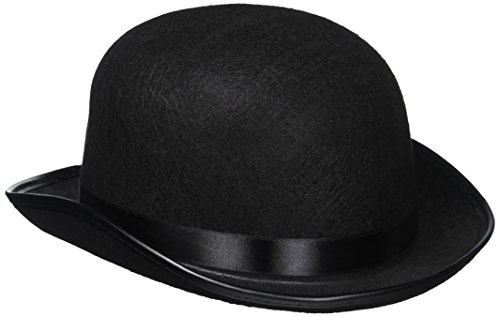 If you want a Derby hat from the original makers, you can acquire a hat from Lock & Co, who are still selling hats today.

Should I Buy A Derby Hat?

If you are a hat person, a derby hat should feature in your collection. Remember to buy the correct size as they are supposed to fit snuggly on the head. A derby hat perched on top of the head is comical. It reminds one of the comedians such as Charlie Chaplin and Laurel and Hardy.