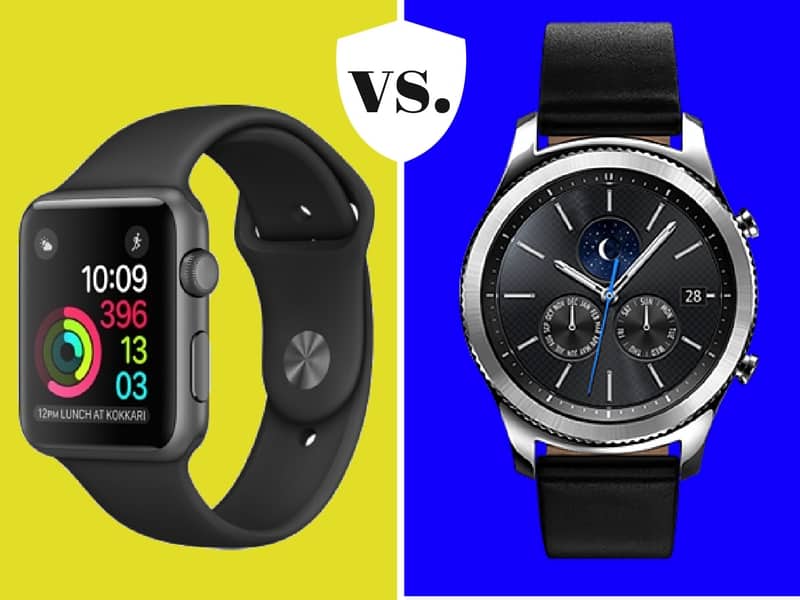 It’s 2 smartwatch behemoth’s head-to-head. Both are popular. Both are excellent; best in class.

BUT, for me choosing a victor isn’t that hard. For me, Samsung Gear S3 is a better smartwatch for one big reason… design.

Okay, I admit it. I’m biased toward the round, dial smartwatches. This bias predisposes me to like Samsung more, especially the Classic (I’m not a huge fan of the Frontier design).

Please keep in mind this may change. Apple may release an amazing new design. Samsung may come out with some smartwatch technology that blows away the competition. This is a quickly changing industry where anything can happen and tech giants are deathly silent about what they’re working on.

I prefer Samsung’s product line strategy. They offer 3 smartwatches, each with a given purpose. The S3 Classic is for everyday and even formal wear. The S3 Frontier is for the outdoors (although it misses the mark, but that’s besides the point). The Gear Fit2 is a dedicated fitness/gym/activity smartwatch. I like the fact Samsung designed 3 distinct smartwatches.

Apple, on the other hand, offers a myriad of designs, but the differences come down to color and straps. The actual watch is the same. And it’s this mono-design strategy that leaves me confused because while I own an Apple S2 as does my wife (Buy best mattress online in Dubai), I’m not sure what exactly the watch is designed for. Yes, it works as a fitness/activity watch, but is that its only purpose? I don’t think Apple intended it to solely be a fitness watch, yet the design is a bit too 1980’s video gamesque for my liking to wear out and about. It’s not hideous, but it’s no Samsung Classic either.

Buy the Apple Series 2 at Amazon

Let’s dig into the performance minutiae

In this section, my comparison will be more subjective in that it’s my experience, testing, and preferences. The end of this comparison you’ll be able to compare the basic specifications of each smartwatch. At the very bottom, you can watch our full video demos of both watches.

Swipe/Responsiveness technology: Both are a joy to use; the swipe is sensitive and works very well. Gestures work well too. Seldom does one get stuck navigating either smartwatch.

Speed: Both smartwatches are equally fast when opening apps, navigating screens and using the smart features.

User interface: While the user interface is different, I have to give props to both for thinking outside of the box. I find both easy to navigate to and among the apps.

App interface on the watch: I like the way you access and navigate apps equally on both watches. All Apple S2 apps are on one screen which you can slide around. Samsung’s apps are nicely organized at the perimeter of the screen and so you jump from screen-to-screen to access the apps. Both different, yet both equally easy and fast to use.

That’s about where the similarities end. What follows are my clear preferences for each watch by function/app:

Health App: While S Health by Samsung is good, the Apple Health app is amazing and tracks a ton of medical and fitness health data. I prefer the Apple health app.

Calendar: I prefer the user interface of the Apple S2 calendar. It offers 3 views and it’s very easy to use. Samsung’s is good, but not quite as good as Apple.

Heart rate sensor: Both heart rate sensors are very accurate when still but struggle with providing a reading if you’re moving. Both will take a heart rate at any time; however, Apple’s is live so you can see it go up and down while with Samsung you must start it each time. Apple’s generates a reading faster as well and it doesn’t require such precise placement on the wrist as Samsung. Overall, the Apple S2 heart rate sensor/monitor is better than Samsung.

Map app The Apple map app with built-in GPS is amazing. The app functions as a full-blown GPS system where you can search for addresses, local restaurants, coffee shops, shopping and so much more. Samsung’s app is called “Maps for Gear” and it offers very little utility. This one is a no-brainer; Apple’s map app is far better than Samsung’s (despite both smartwatches having GPS).

Phone: You can call and receive calls on both smartwatches. If you get the LTE version of Samsung, you can do so without your mobile device which is huge. Not so with Apple. Also, unless you download (and pay) for the “Watch Keypad” app, you cannot dial numbers, which restricts you to calling only people in your contacts. Samsung offers a keypad; in this case, Samsung definitely provides better phone functionality.

Keypad/Text Input: Apple doesn’t have a keypad insisting you use Siri. Siri is great and all, but sometimes a keypad is handy. Samsung offers a keypad which is great plus there are apps for different keypad layouts. Definitely advantage Samsung here.

Music: I’m a premium Spotify user, and Spotify syncs and operates beautifully on the Samsung Gear S3. Better than I ever expected. Apple won’t integrate with Spotify because Apple wants you to use iTunes. I’m not an iTunes user so in this case, I much, much prefer Samsung Gear S3 for music. However, if you’re an iTunes user, you’ll prefer Apple.

Additional Navigation: Both watches offer additional navigation. Apple offers a button that rotates for scrolling. Samsung offers both navigational buttons and a rotating bezel. Overall, I like the navigational features of Samsung, but it’s super close. It’s probably too close to call; I think you’d get used to either and enjoy both. Note, the buttons and rotating features are in addition to the touch/swipe screens.

There you have it. That’s a feature-by-feature comparison of the Apple S2 and Samsung Gear S3 in as much as I’ve used both. There are apps for both I have not used. The more I wear and enjoy both watches, the more I’ll discover that I like and dislike about both of them.

For me, it comes down to design

On a feature-by-feature comparison, I prefer more Apple features. However, I cannot get over the design and since I much prefer the design of the Samsung, I have no choice, if forced to choose just one of these outstanding smartwatches, I’d go with the Samsung Gear S3.

Buy the Apple Series 2 at Amazon