Skip to Content
I've been wearing the Apple Watch 5 on one wrist and the Samsung Galaxy Active2 on the other wrist for nearly 2 weeks. Here's my extensive comparison of these to popular smartwatches. I also have both an iPhone and Samsung phone so each are connected to their optimal phones. 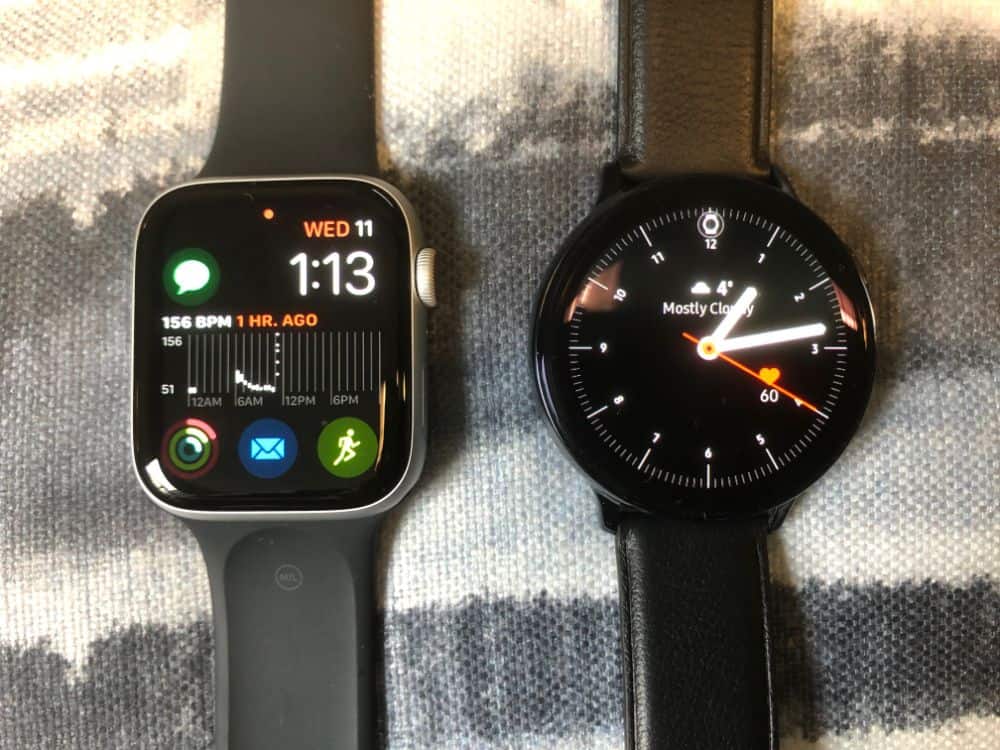 I bought both the Apple Watch Series 5 AND the Samsung Galaxy Active2 smartwatches (plus more for good measure).

Ever since then I’ve been sporting Apple on the left and Samsung on the right.  I had the Apple Watch connected to my iPhone 8 and the Samsung watch to my Samsung 10E.

2 weeks later it’s time to pen this comparison.  Which one is better?

As with most things tech and most things in general, each has its strengths and weaknesses.

For those of you who want the answer right away, here it is:

Samsung Galaxy Active2 is best if you have a Samsung phone.

Apple Watch is best if you have iPhone.

Sorry, but that’s the result.  Apple doesn’t work on Samsung (at least I couldn’t pair it).

What if the phone didn’t matter?  Which do I prefer?

I prefer the Apple watch.

Which means if you’re also choosing a phone, get the iPhone with the Apple Watch.  It’s a better smartwatch experience.

Let’s break down the comparison feature by feature

However, if forced to pick, Apple is my watch.

Apple Watch is insanely comfortable. There have been times I have to pat my wrist just to make sure I remembered to put it on. I’m not kidding.  It really feels like there’s nothing there (which means it there is no feel, right?).

The Samsung Active2 kept sliding down my wrist.  It was annoying throughout the day.  I could tighten it, but then it was too tight. 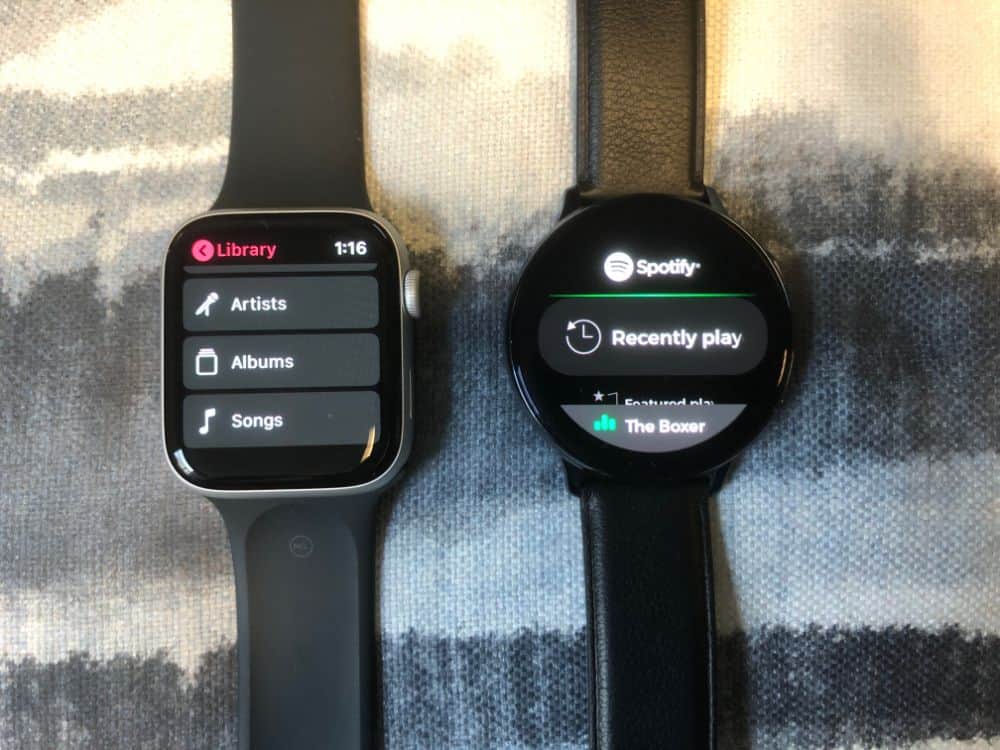 Apple Music on the Apple Watch vs. Spotify on the Samsung Galaxy Active2 Smartwatch (Comparison)

This is where Samsung wins the day.

I like Spotify more than Apple Music.  I can’t put my finger on it, but for me Spotify is a better streaming music experience.  Yes, I have premium accounts for both.

Spotify syncs and works on Samsung Galaxy watches beautifully; flawlessly.  Once paired and assuming you set it to “standalone”, you can fully control Spotify on your watch.  With a pair of Galaxy Buds (I use these too), you’re golden.  Actually, any wireless earbuds work great on Galaxy phones (I have all the top earbud brands so I know).

Apple Music, as you’d guess, works beautifully on the Apple Watch.  I have no complaints about how it operates.  You have full control and of course with Apple airpods, it’s seamless.  However, as stated above, I prefer Spotify. 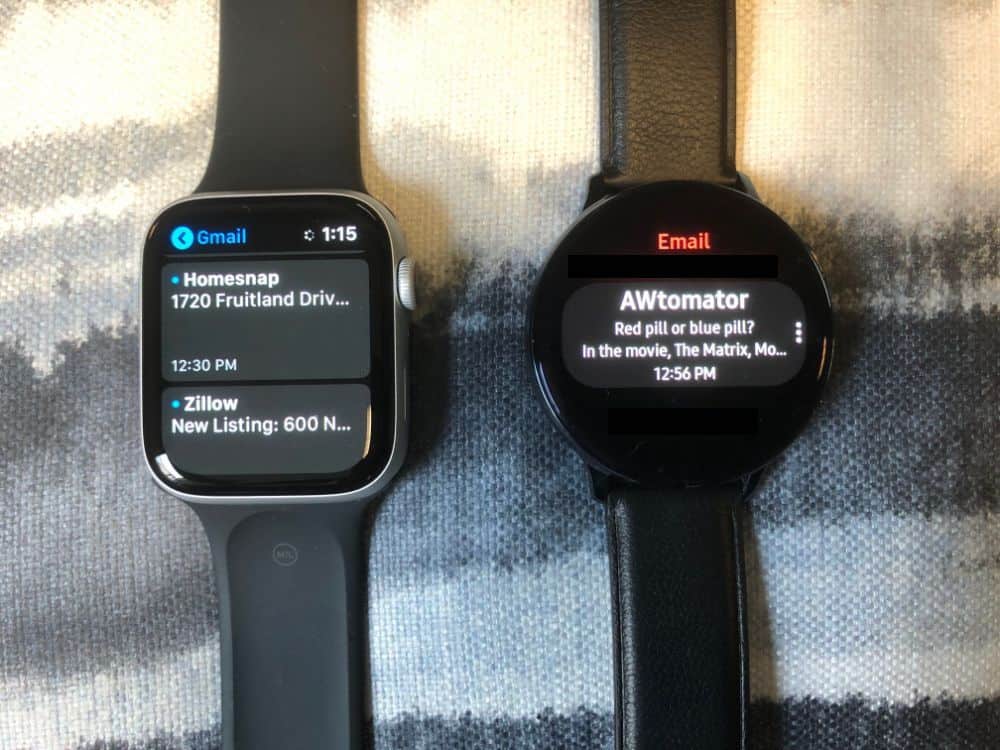 It’s odd, but emails are delayed with my Apple Watch which is super annoying.  I sync my Gmail account with Apple watch but rarely are my latest emails in there.  I also can’t get the email notifications to work on Apple.

Samsung, on the other hand, pulls in my latest emails almost in real-time.  I get the notifications like clockwork (you can turn these off if it’s annoying you).

I gotta hand it to Samsung but the email works better on the Galaxy watches. 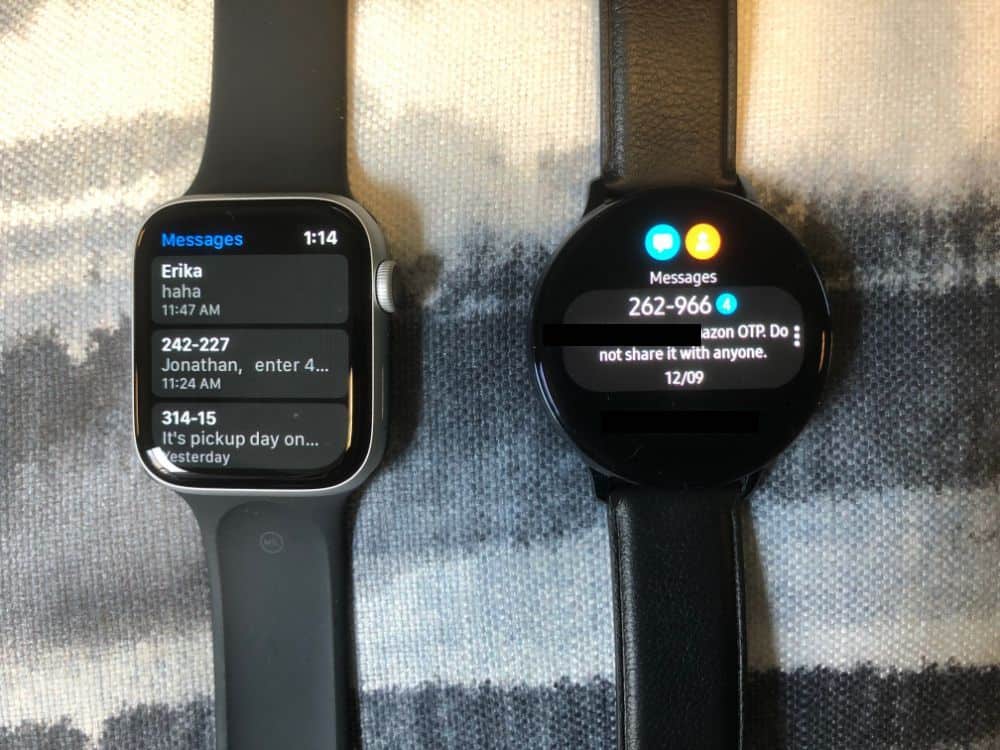 Apple wins here.  I love the text messaging app on Apple Watch.  I get notifications consistently.  I can reply with simple replies such as an emoji or canned responses.   I particularly like how I can customize the Apple display to put a text icon on it so I can access text immediately.

I’m not saying Samsung test is bad.  It’s quite good. I just prefer Apple in this regard.

Both Apple and Samsung watches come with robust health/fitness apps for phone and watch.

Both take a bit to set up and become familiar with.  Each tracks pretty much everything.

Overall, it’s a wash for me. I don’t have a preference.  Most people will be happy with both.  That said, I use very few features in these apps.  I track my daily workouts, steps and heart rate.  I don’t input food, hydration, sleep info, etc. 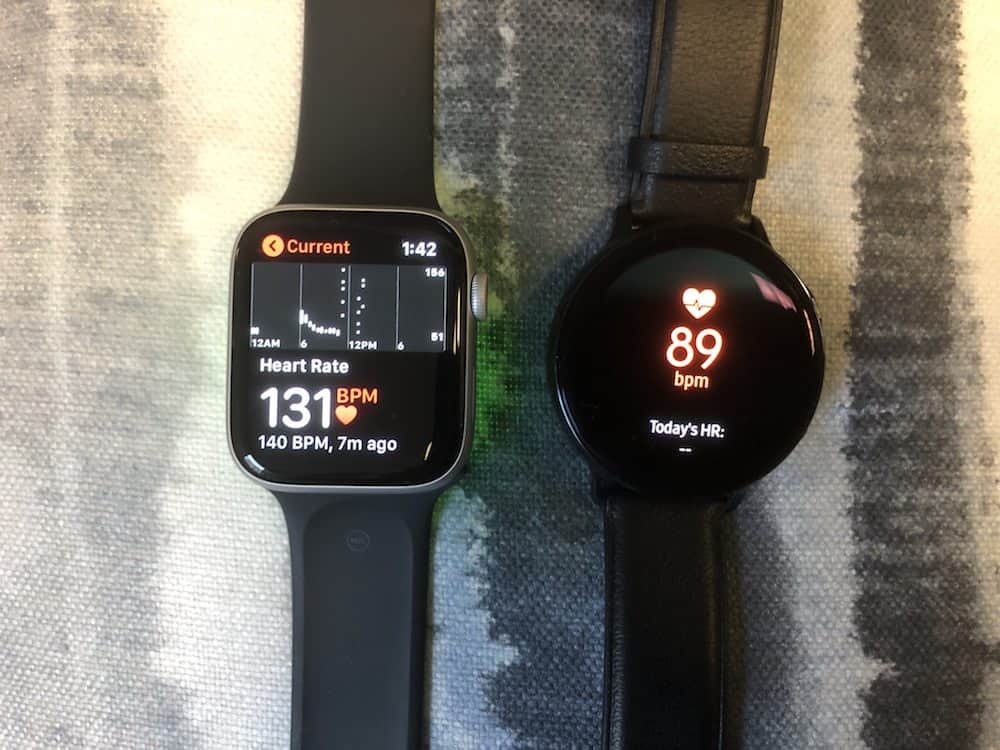 This is a tie with respect to accuracy.  I repeatedly tested the heart rate monitoring and they are almost always the same.  It’s  impressive actually.  If anything, Apple tends to report a rate about one to two beats slower than Samsung, but it’s close.  Usually the number of beats per minute reported are the same on both.

That said, the daily rate chart with Apple is one of my favorite Apple Watch features.  With the Series 5, I can display the chart on the screen.  With one touch, I can access the heart rate report.  It’s brilliant.  Samsung doesn’t offer this so I have to give Apple Watch the nod for best heart rate reporting.

While the Apple Watch is super comfortable, the Samsung Active2 looks better.  Sure, Apple Watches are distinctive.  Maybe they’re a status symbol (I doubt it though).  However, the Active2 has a stylish minimalist design.

Of course, this comparison is in the eye of the beholder.

Apple cleans up in the maps department because it’s built in and half-decent.  The search for specific locations takes a long time to load, but the maps app is good.

Get this, there is no built-in maps functionality with Galaxy watches.  You need to buy NavigationPro or HERE WeGo from Google Play.  That sucks.  I didn’t bother getting those apps, but apparently they’re decent.  I don’t like having to download additional apps for something that should be included.

Of course, Samsung’s problem is they haven’t invested in map tech like Apple or Google so Samsung has to piggy back off Google’s efforts. 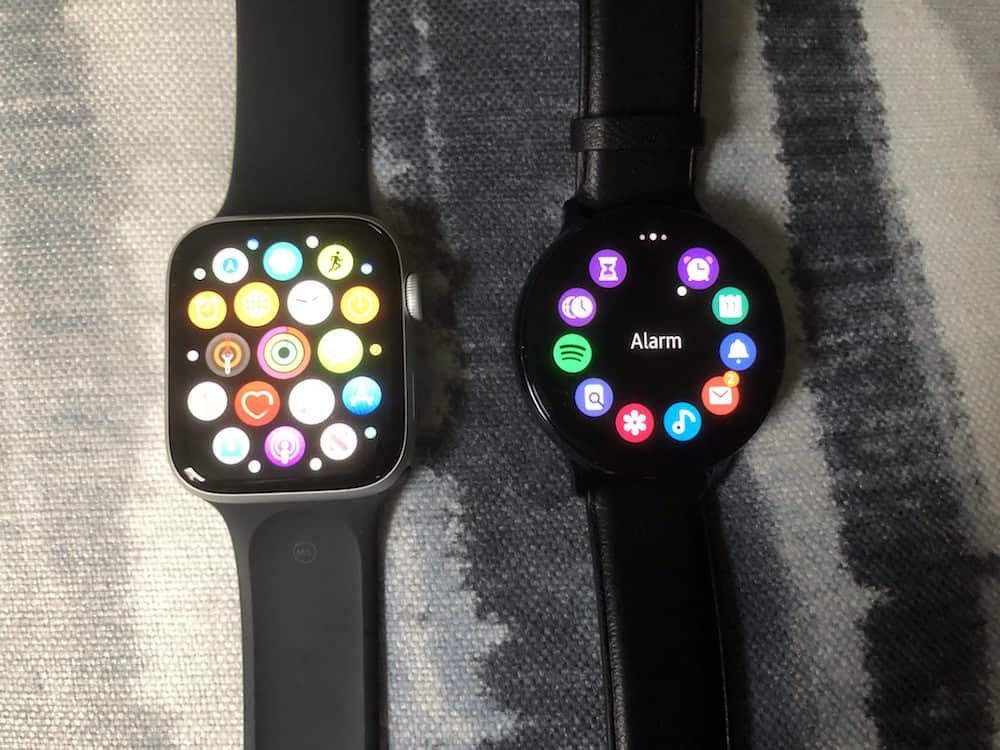 Oooooohhhh, this is a tough one.  Both watches offer different, but cool navigation.

Both work great.  Both are intuitive.

However, if forced to choose, I like Apple’s floating cloud of apps simply because all apps are on one screen.  With Samsung, you must flip through multiple screens to access all apps.

Apple wins in the battery department.  I tested it.  I put both watches on with full juice at exactly the same time and ran them until they were down to 5%.

Here are the timelines:

That’s 35 hours with relatively heavy use.

Since I use smartwatches more for practical uses than style, I have to give this to Apple.

With the Apple 5 you can customize which apps you put in many places on the main face.  In other words, it’s highly customizable which I love.  Samsung does not offer this (they should).

Since many Google Play apps work on Samsung, you have a lot of options.  That said, the Samsung Galaxy Wear store is very limited.  Moreover, you can’t access Google Play on the Samsung Watch which means you must download it on the phone and then get it onto the watch.  It’s a hassle.

Apple, which is the king of apps, offers all kinds of amazing app options.  Moreover, you can access Apple app store directly on the watch which makes installing and deploying super simple. 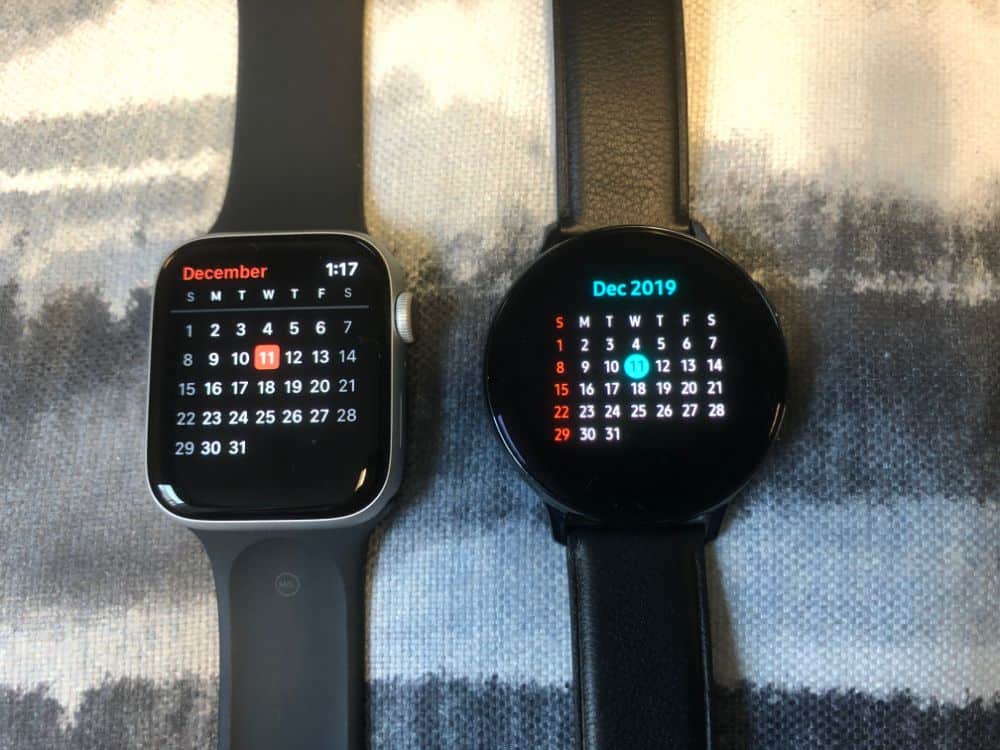 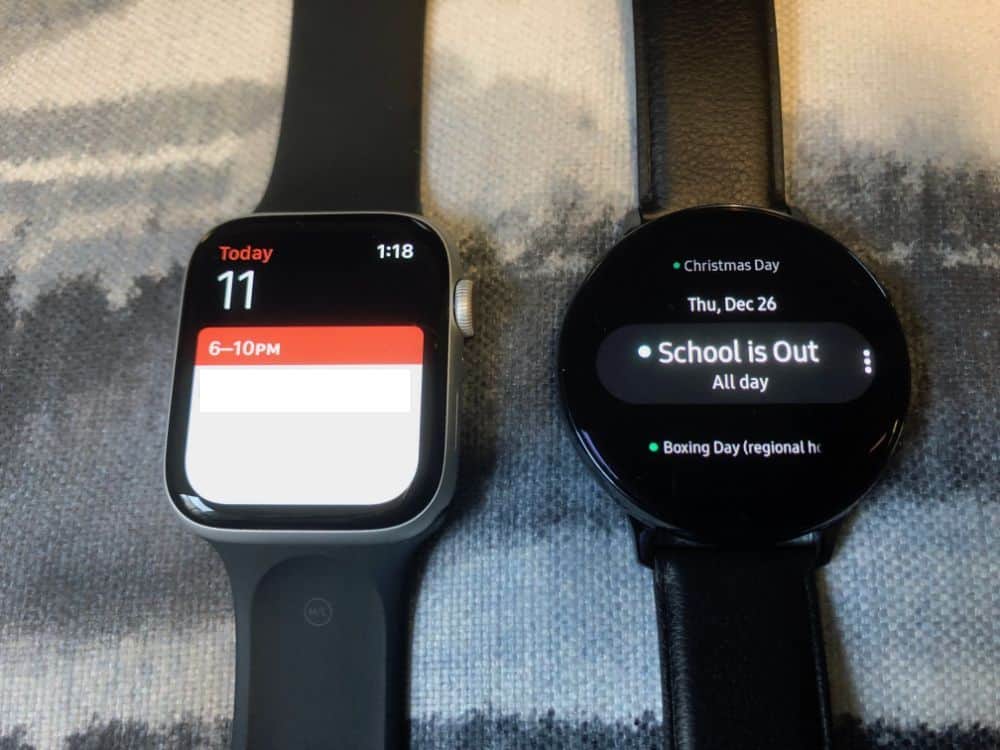 Apple’s watch calendar is superior by a long shot when it comes to views.  There are 4 different views.  You access those views by opening the calendar on your watch then pressing down.  Voila, you’ll be amazed.

HOWEVER, you cannot create an event on the Apple Watch.  You can create events on the Samsung Galaxy and that’s wicked cool.

Apple Watch works with gloves out of the box.

With the Galaxy, you need to turn on the “Touch sensitivity” setting… but once turned on, it works really well.  Better than Apple.

Overall, if phone was not an issue, the Apple Watch Series 5 edges out the Samsung Galaxy Active2.

It’s definitely close.  The Samsung won several categories, but if forced to choose, I’d opt for the Apple.

If, however, you have a Samsung phone, the Galaxy Active2 is a great watch.