Skip to Content
It almost seems unfair to pit the Ticwatch E2 budget smartwatch against the premium Apple Watch Series 5. But I was surprised at how the Ticwatch E2 fared! 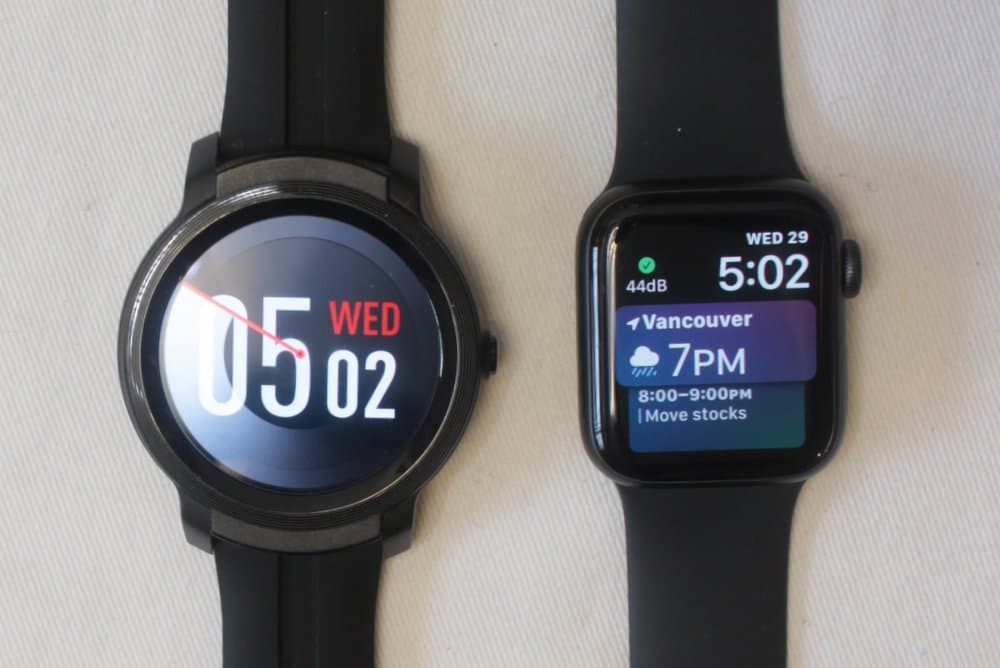 Every time I have to write a comparison between another watch and the Apple Watch Series 5, I shed a little tear.

The Apple Watch is just too good. It’s smaller than most other watches and yet has premium features.

The Apple Watch Series 5 would have ranked as my favourite watch, if not for one reason — I am an Android user.

Conversely, if you are an Apple iPhone user, you’re definitely better off with the Apple Watch Series 5… assuming you can afford it. It is one of the pricest general-purpose watches out there, and this is perhaps where Mobvoi’s Ticwatch line finds its niche as an affordable alternative.

For fairness, the rest of this review will write from an iPhone user’s perspective, since the Apple Watch will not pair with anything but an iPhone, unlike the Ticwatch E2 which will apir with either Android or iOS. 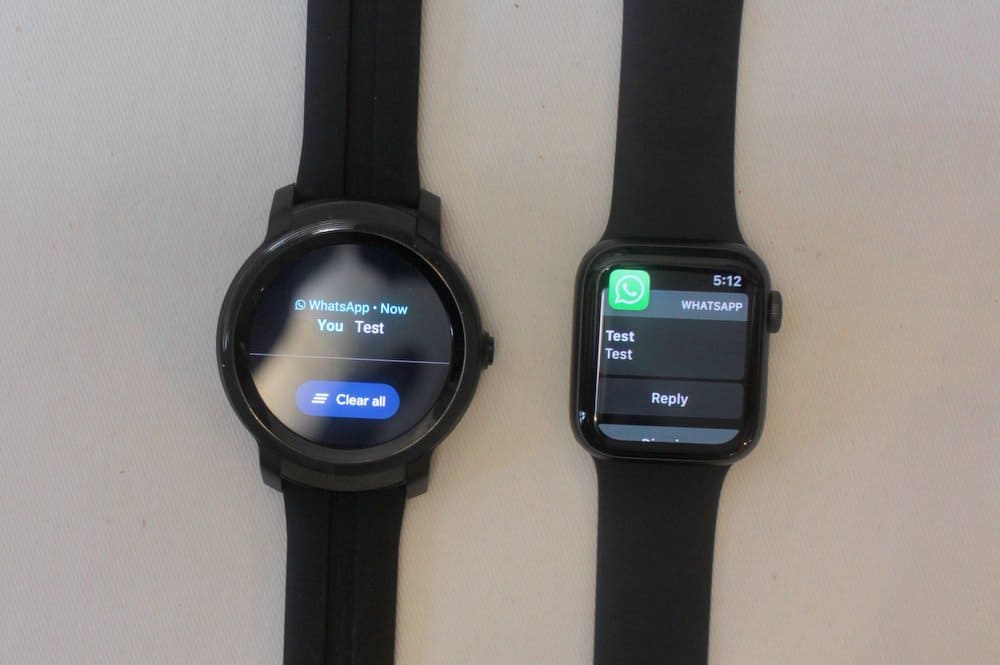 One of the most useful features of having a smartwatch is getting your notifications right on your wrist.

With the Ticwatch E2, you can get notifications, no problem. You can read a snippet of the message or email that you have just received. It’s just that you can’t reply to them.

It’s the opposite with the Apple Watch. Not only can you read your notifications and reply to them, you can also view your email and text logs. To be fair, this feature hasn’t proven to be very useful — I mean, if you want to read past messages or emails, why not just pick up your phone? 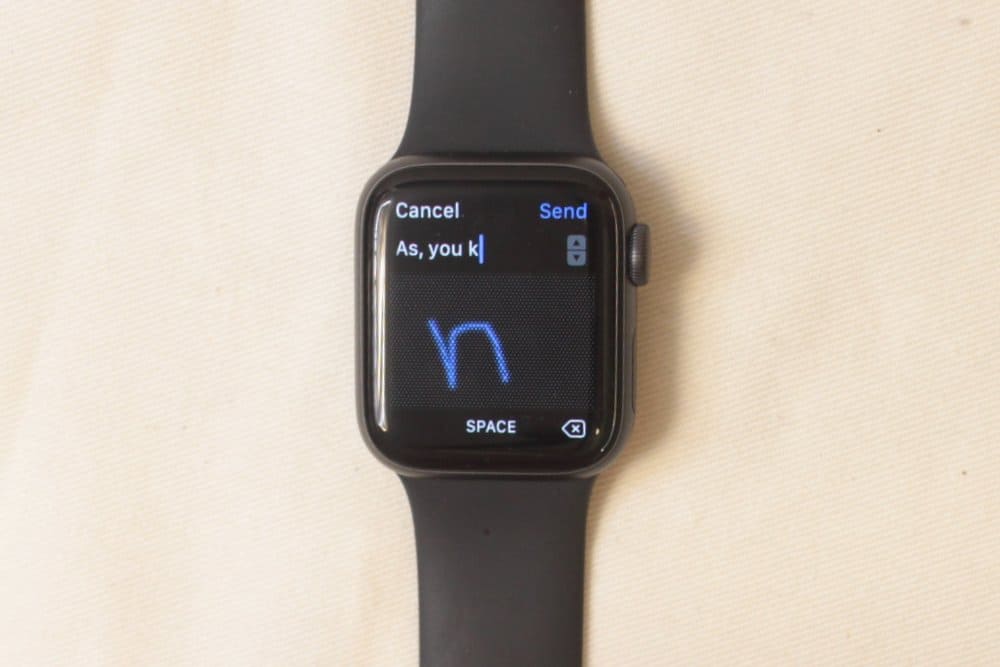 Replying to a message on the Apple Watch is easy because the speech-to-text input is excellent. It’s also my preferred way to input text into my watches.

There are other means of inputting text including Scribble, where you draw letters to form words or by using a pre-composed response.

On the Ticwatch E2, you can input text using the above methods, plus a full keyboard, but if you are on an iOS device, you won’t be using these features much, given that you can’t reply to notifications. 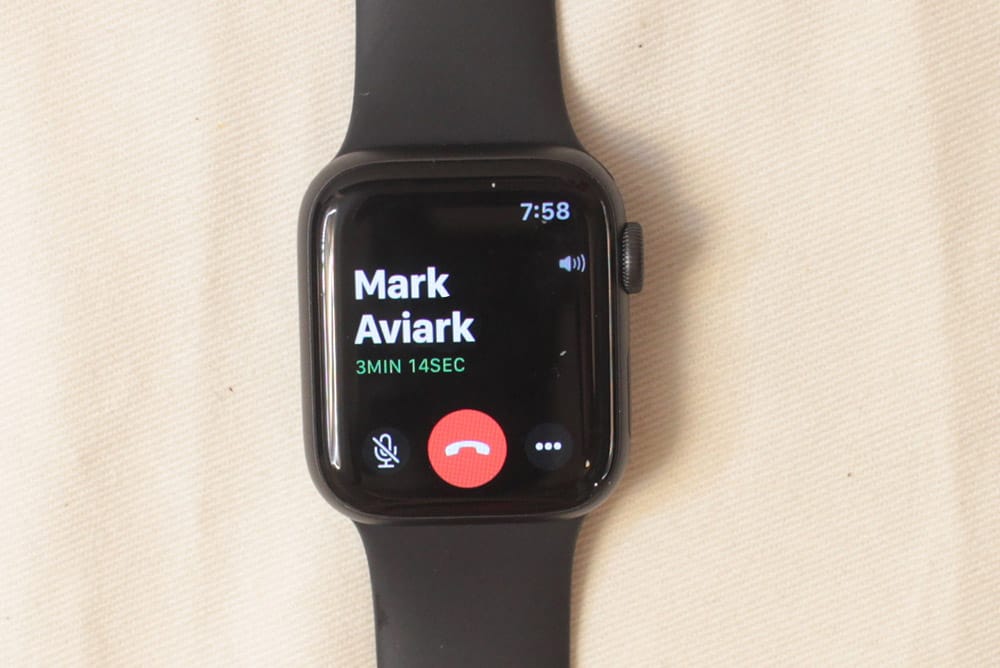 Since the Ticwatch E2 does not have a speaker, you can’t make calls on that watch, nor answer them. When calls arrive, you can accept them or decline them, but if you want to chat, you will have to use your phone.

The Apple Watch has a speaker and therefore you could chat on the watch. You can also make outgoing calls using the Watch’s phone app. Call quality is good and clear. 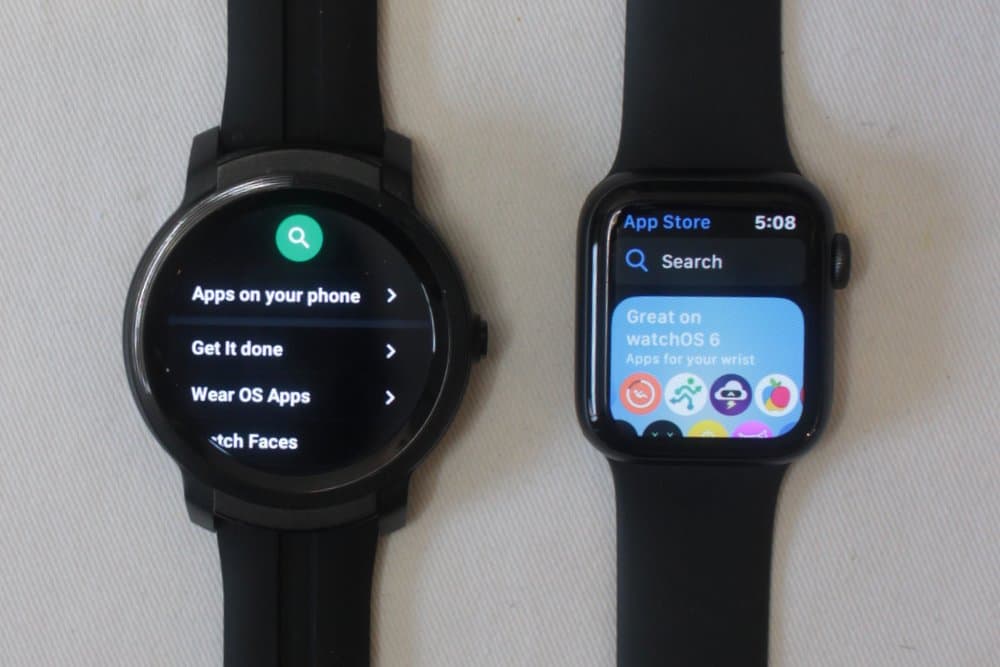 The Ticwatch E2’s Wear OS has a big user base, just as the Apple WatchOS. This means that they have a bigger app store.

Apple’s App Store has many useful apps such as games, sleep tracking tools and productivity apps. You can download Apple Maps if you want a navigation tool for the watch just as you can download a Facebook Messenger app.

The Ticwatch E2 also has some great apps including some from Google. I really liked having Google Maps, Keep and Translate on the Ticwatch E2.

Curiously, each platform brings some interesting apps. The Wear OS has a hand washing timer (due to COVID-19) while the Apple Watch has a noise meter.

Apps perform well on both watches with the Ticwatch E2 being a bit slower than the Apple Watch.

Both watches have a voice assistant. The Apple Watch has Siri while the Ticwatch E2 has Google Assistant.

Unfortunately for the Ticwatch E2, you are required to download the Google Assistant app on your iPhone if you want to use it, whereas Apple Watch users can use Siri right away.

Both watches are excellent in how they respond to your queries. They can find information, start navigation and set timers.

Siri is a lot smoother, though, than Google Assistant. One example is when I start a four-minute timer (to cook pasta). In doing so, Google Assistant pauses twice, once at the “Speak now” prompt, and the other after you have sent your request. Siri was almost instantaneous at every step.

And because the Ticwatch E2 does not have a speaker, you won’t be able to hear its response to your question or task.

Both devices require charging daily if you use them for any good amount of time. If you push it to a second day, the Apple Watch will likely not make it through the full second day. In my test, it lasted 36 hours before going into power saving mode.

The Ticwatch E2 lasts a bit longer and it might make it through a second day if you use it conservatively. No surprise — in my experience, bigger watches tend to have better battery life.

The Ticwatch E2 is a comfortable watch because it is very light and its strap is also very comfortable. It has a silicone strap and a plastic watch case, which makes it really light. A light watch is generally more comfortable because it’s less noticeable.

The Apple Watch is smaller, but surprisingly heavier. It definitely packs more features in a smaller watch case, so it’s no surprise to me that it’s heavier.

The base model Apple Watch comes with a silicone strap which is also very comfortable. Its weight can be felt a bit more than the Ticwatch E2, though. 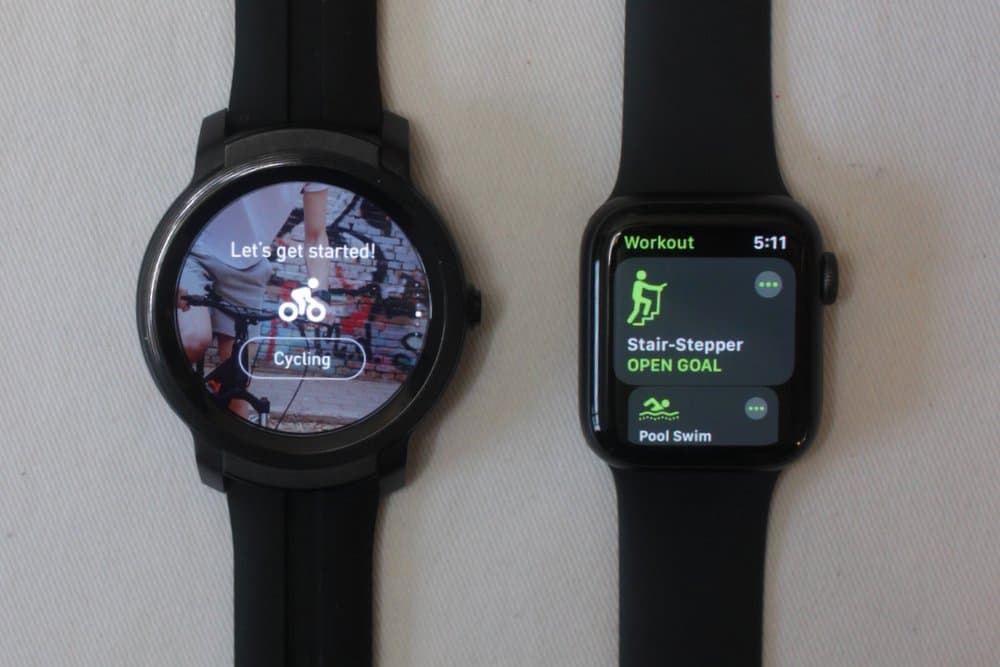 Both the Apple Watch and the Ticwatch E2 can be taken into the swimming pool and both have an integrated GPS. That’s very convenient if you are going swimming at the beach and can’t bring your phone with you to track your swim.

Both watches also have different apps to help you track your workouts. The Apple Watch comes with a Workout app that helps you track specific workouts from swimming to running to cycling.

It also has an Activity app which tracks how many minutes of exercise you have done, movement minutes and it also tries to get you standing when the watch detects you’ve been idle for too long.

Whereas on the Ticwatch, you get two sets of apps that can help you with this aspect. Google Fit recently changed from tracking movement minutes to tracking steps, and also another metric called “Heart Points”, which tracks the intensity of your activities. Google Fit also has a big range of exercises that you can track. 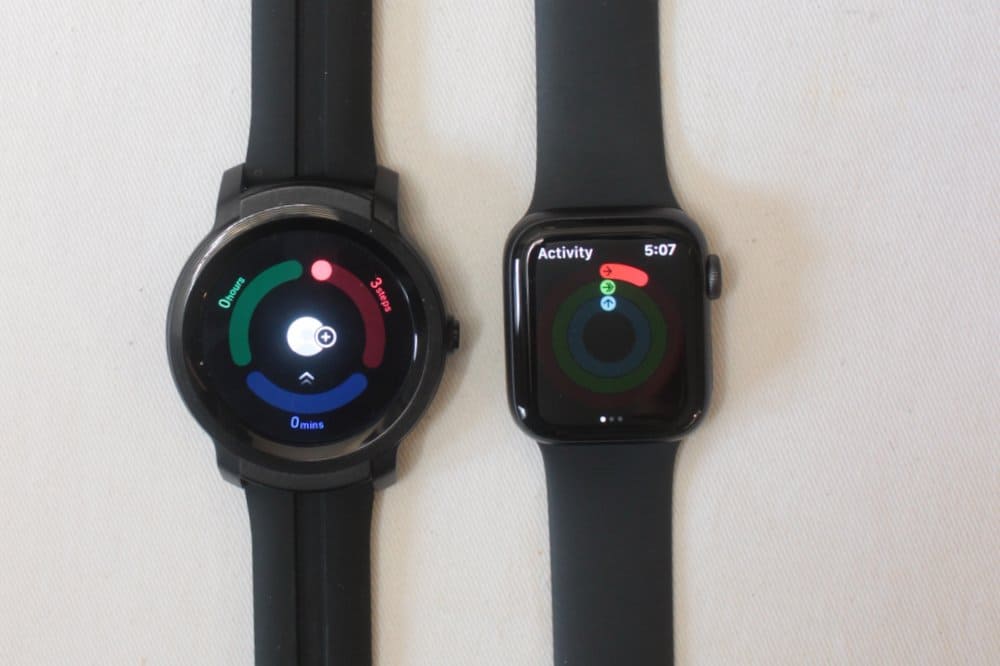 The Ticwatch E2 also has Mobvoi’s proprietary exercise and wellness apps including TicHealth, TicPulse and TicExercise.

TicHealth is very similar to the Activity app on the WatchOS in that it tracks your steps, exercise minutes and active hours. The Ticwatch E2 will also remind you to take a few steps during each hour of inactivity.

TicPulse is a heart rate monitoring app and TicExercise is a workout tracker, which overlaps with Google Fit. It’s up to you to see what you prefer, but I prefer Google Fit because of its portability between different brands of watches. 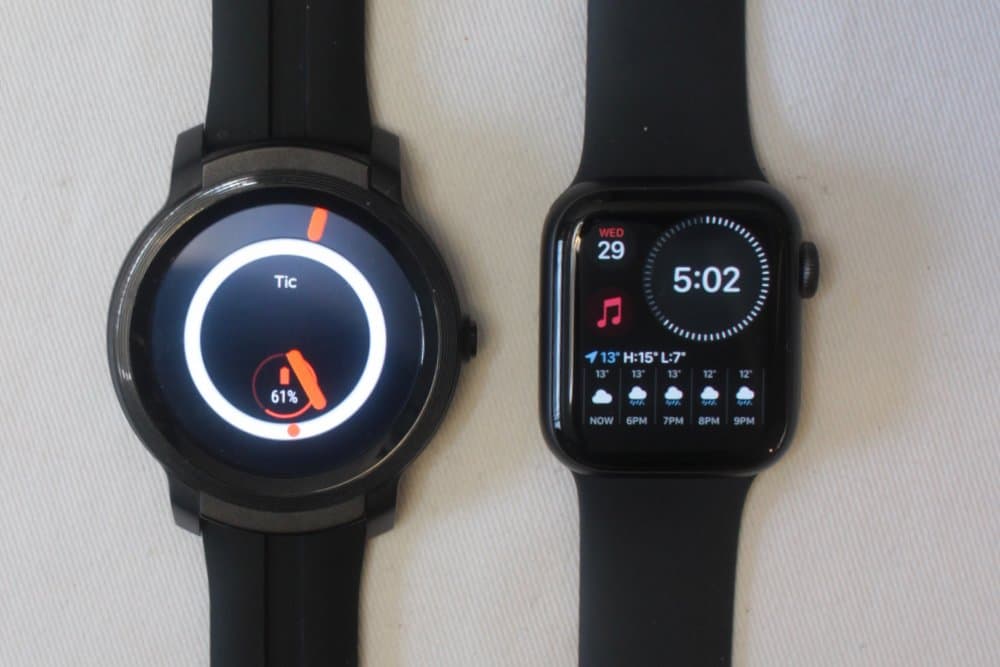 I think you can’t go wrong with either watch. I much prefer the Apple Watch Series 5, but also recognize that it is a watch that costs a lot more than the Ticwatch E2.

I’d say this: if you can buy the Apple Watch, buy it. It’s the only watch that has such high levels of integration with the iPhone.

But the Ticwatch E2 is a great budget alternative. For the price you are paying, you are getting a watch with great features including Google Assistant, Google apps and a very good fitness and health package.