Skip to Content
Two flagship smartwatches from Samsung and Apple go head to head. They command the same price, but are they worth the price they command? 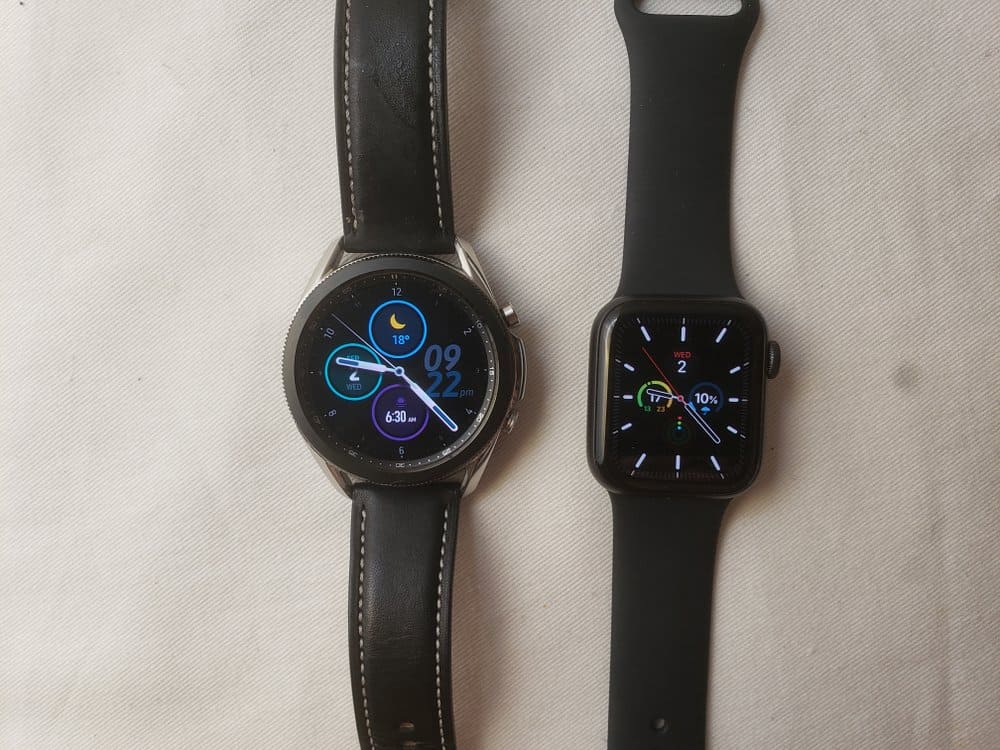 Samsung’s Galaxy Watch3 commands a price that is up there with the Apple Watch Series 5.

That must mean that they are both neck-and-neck in their features, ease of use and hardware, right?

I can’t agree any less.

If I had not tested so many watches, perhaps I wouldn’t have such a perspective. But I have and some flaws are just too jarring to ignore.

The Apple Watch Series 5, on the other hand, is one of the most exciting smartwatches out there.

It really is just an excellent smartwatch because of its elegance, design, software breadth and hardware capabilities.

The most impressive part about the Apple Watch Series 5 is that Apple was able to stuff so many premium features in such a small package and also have a decent battery life. No other smartwatch of this size has such a great balance of performance and robustness.

Just one warning, though, the Apple Watch Series 5 will only pair with an iPhone. The Galaxy Watch3 pairs with everything, but is most at home with a Samsung smartwatch, and most crippled when paired to an iPhone.

For fairness, I will be comparing both watches’ functionalities when paired to smartphones that work best with them, so I am testing the Galaxy Watch3 with my Samsung Note9 and the Apple Watch Series 5 with the Apple iPhone 8. 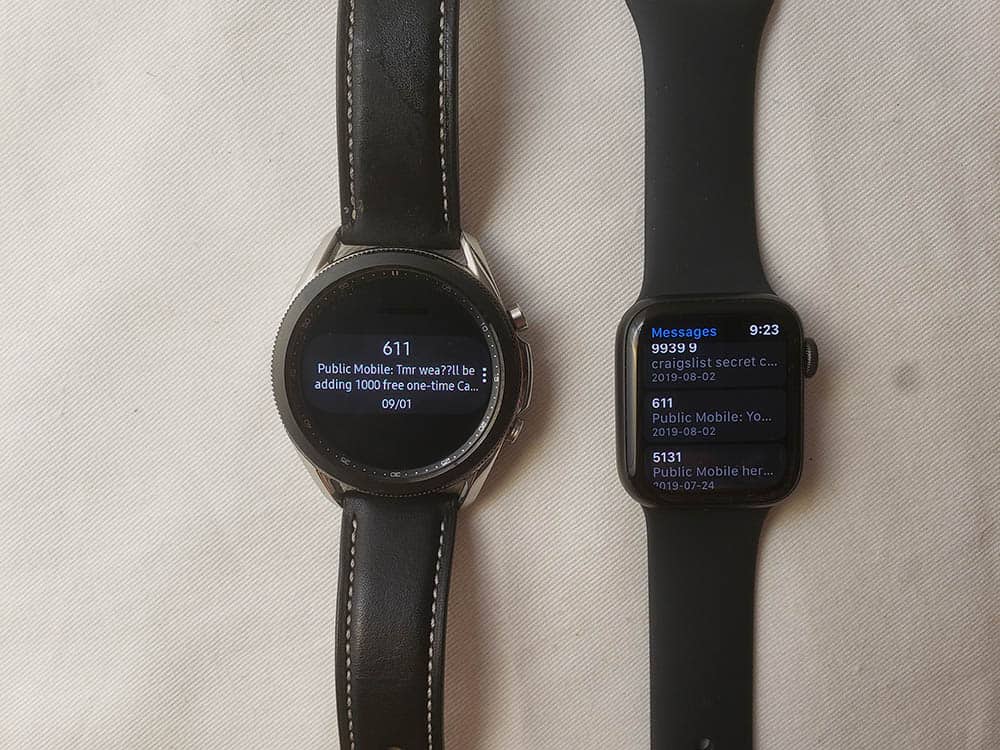 So, let’s get down to one of the most important features on a smartwatch.

Texting and emails are an important reason why I wear a smartwatch. I like being able to read previews of my emails and messages. It’s especially useful when my phone is tucked away in a hard-to-reach place such as in a pannier of a bike or a dry bag on a kayak.

The great thing about using the Samsung Galaxy Watch3 with a Samsung phone is that you get access to your SMS and email log. The same goes for the Apple Watch. It’s a great convenience, but not a feature that I frequently use. 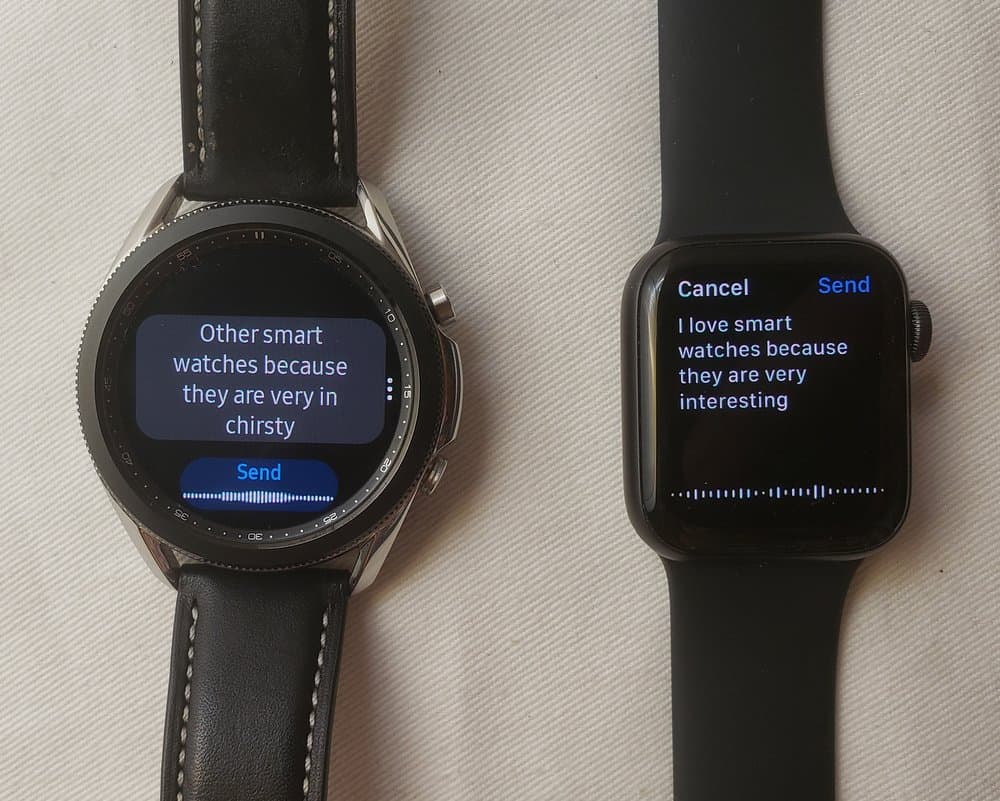 Replying on the Apple Watch Series 5 is also superior. It boils down to Apple’s great speech-to-text transcriber, which Samsung cannot keep up with.

If you say the same thing to both watches, you will get different results. On average, you will be better understood by the Apple Watch Series 5 than the Galaxy Watch3. This means more frustration and tedium for the user of the latter watch. 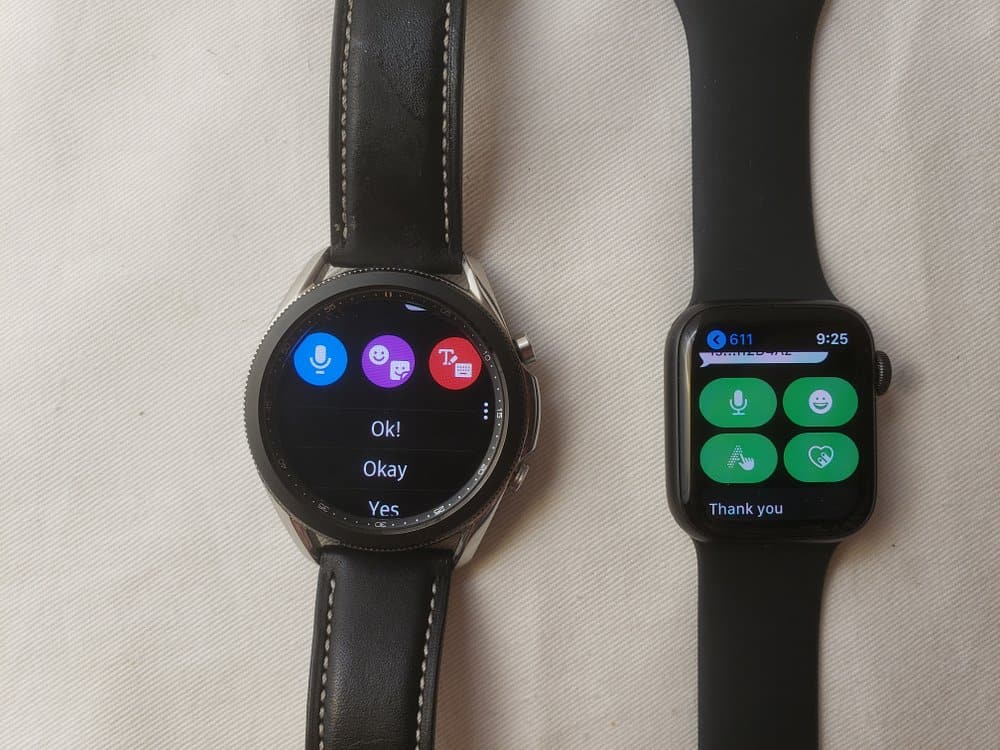 If that doesn’t work, then you can use the handwriting function where you can draw letters to form words. The Samsung Galaxy Watch3 also comes with a numberpad keyboard that you can use to input text.  But if you have to use any of these, I think it’s more convenient just to pull the smartphone out.

Both systems also have dynamically generated pre-composed messages. Sometimes that can fulfill your needs.

So as a result, the Apple Watch Series 5 experience is much better than the Galaxy Watch3’s. 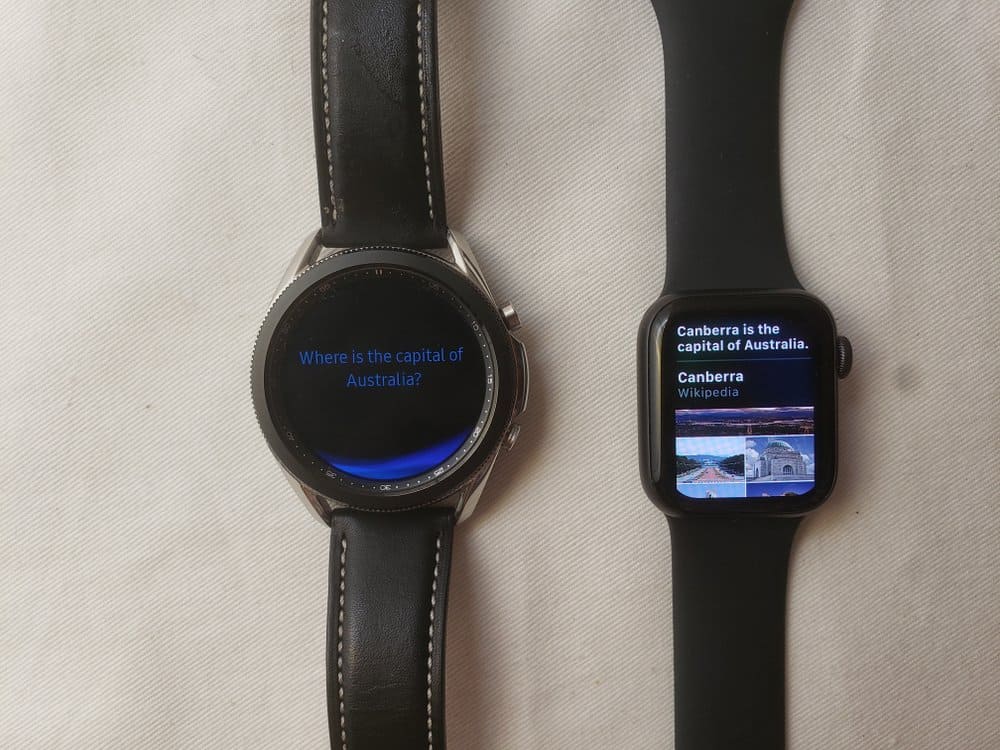 Both smartwatches have a voice assistant and they are great for helping you do tedious tasks.

However, Samsung’s Bixby is inherently less capable than Apple’s Siri.

Bixby is really hampered by its poor speech-to-text transcriptions. So sometimes Bixby won’t understand what you want whereas Siri would.

Every time a voice assistant fails to help you do what you want, it really becomes a pain. You can doggedly try it again or you can give up and do it manually.

But when it comes to Samsung watches, you have to be aware that Bixby can’t search the web like Siri can. If you give Bixby a random query that it can’t assign to one of its apps, it will just give up. Siri will tell you what it found on the web.

By the way, on the image above, the Samsung Galaxy Watch3 failed to give a result, instead, it said that there are no navigation capsules available. 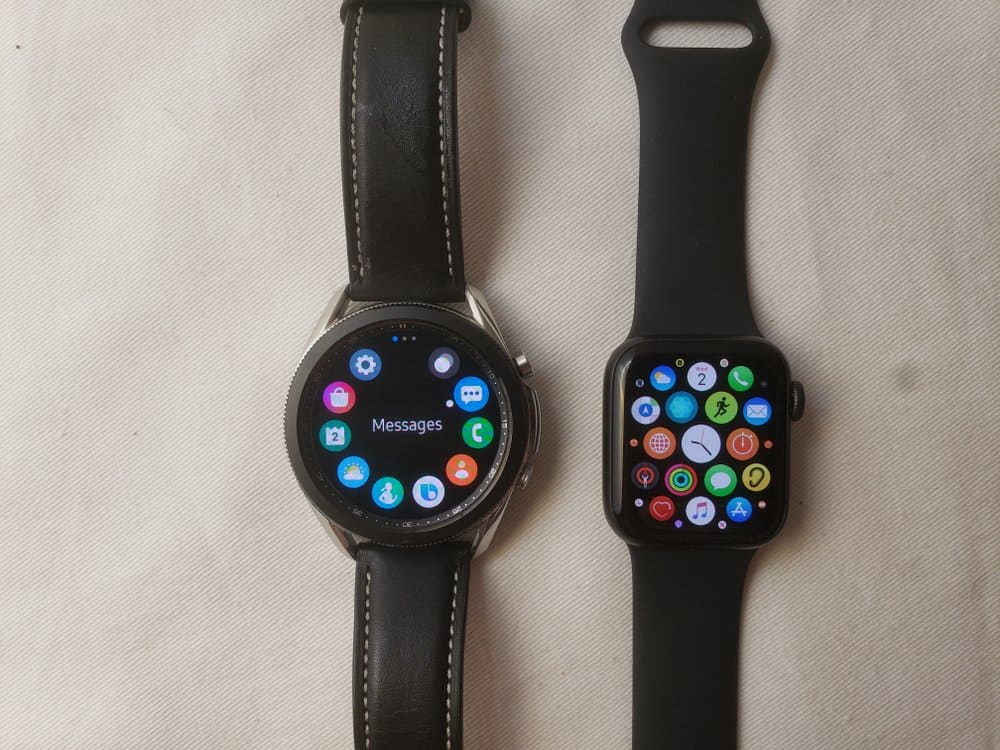 The app store on the Apple Watch Series 5 is huge, especially in relation to the Galaxy Watch3’s Galaxy Store.

The default apps on both are pretty useful but I still have a liking for the Apple Watch Series 5. I really like that it has innovative apps such as a noise meter and a compass. You can download additional apps such as Apple Maps, which can be really useful to have on your wrist.

The apps on the Galaxy Watch3 are common apps with nothing that I’d say is too innovative. However, Samsung also has some apps that you can download off the Galaxy Store that are pretty interesting such as the Camera Controller, a PowerPoint controller and an internet browser. There isn’t an official map app on the Galaxy Watch3 which is a bit disappointing, since some of its main competitors do like the Wear OS does. 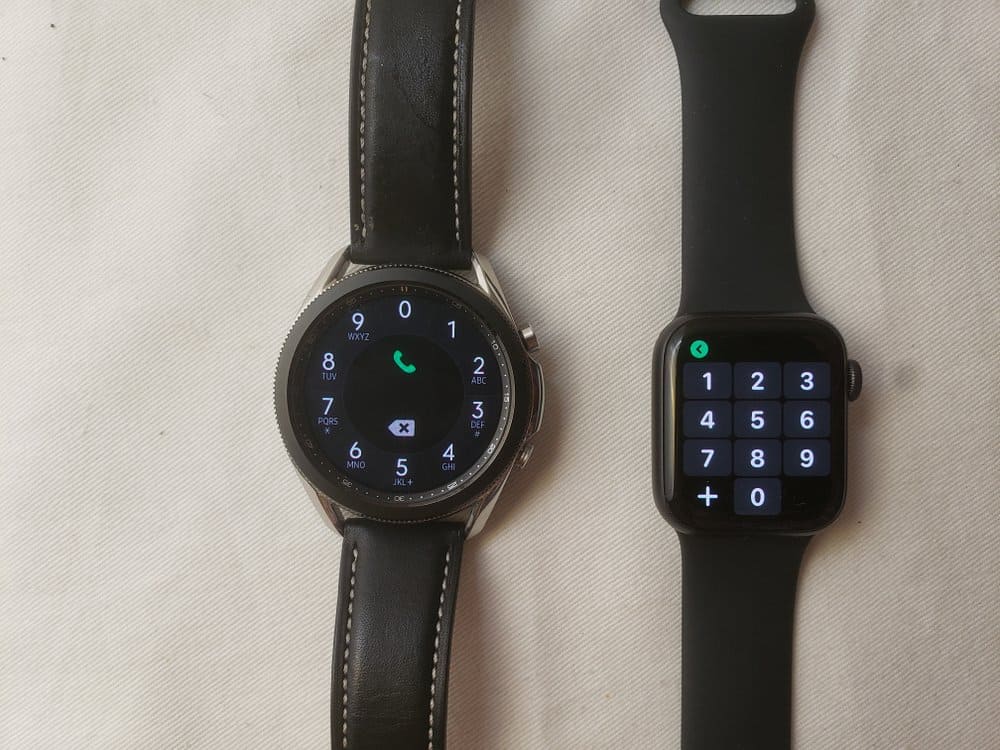 Both smartwatches have a call function which is great. As it has a speaker, you can easily make calls and receive calls through the Galaxy Watch3 or Apple Watch Series 5. 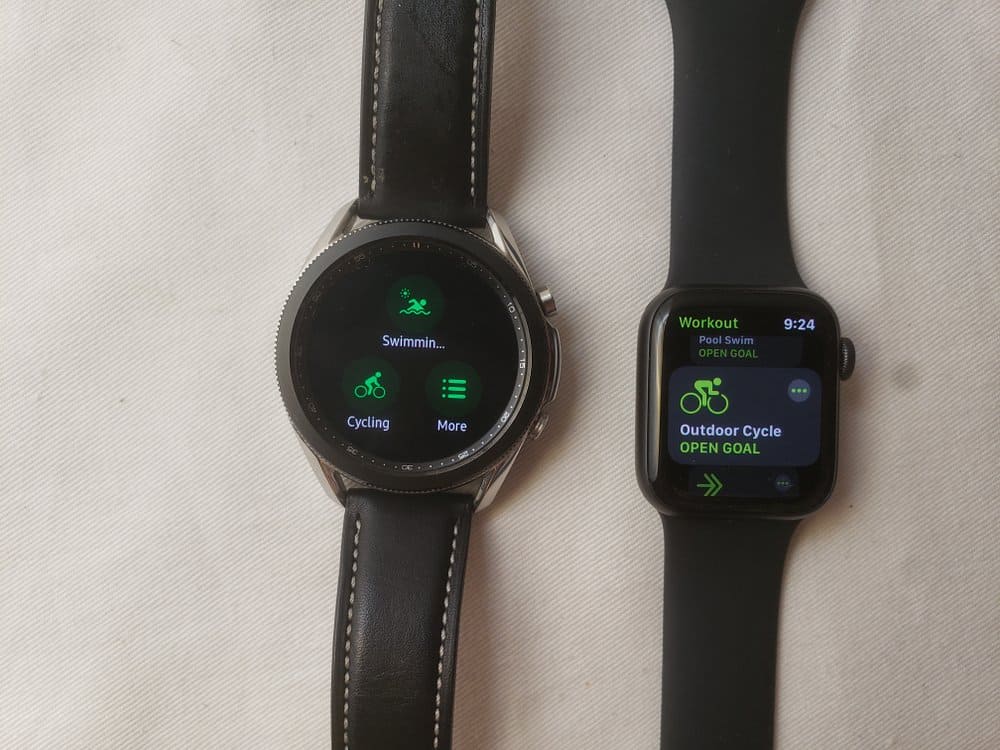 Apple Watch Series 5 has rings and the Galaxy Watch3 has a heart.

It almost sounds like Beyonce’s “if you like it, then you shoulda put a ring on it.”

These two systems keep you accountable to some extent. If you’re not an active person, you won’t become one because of the watch, but what I like about it is that it helps you track whether or not you have been accomplishing the goals you have set.

Samsung and Apple both offer up great software to track your workouts too. What I like about the approach Samsung and Apple take is that they’ve developed a very cohesive and well integrated ecosystem. Samsung has Samsung Health while Apple has the Health app and everything related to health and lifestyle goes into these apps.

The Galaxy Watch3 has a very useful feature for runners, called the running coach. In it, you can set the type of coaching you want from light running to calorie burning to speed endurance. It will pace you to run in different zones. After your run, you will be able to get advanced running metrics such as the asymmetry of your footwork and your VO2Max. This is pretty good stuff that I would expect from sports smartwatches from Polar or Garmin.

The Apple Watch Series 5 has a Workout app which tracks workout. In essence, it’s very similar to the Galaxy Watch3, where you can track the standard swimming, running and biking, but unlike the Watch3, the Apple Watch Series 5 does not have as many gym specific exercises. Both watches can be submerged in water for swimming.

In essence, both platforms function very similarly, but the Samsung Galaxy Watch3’s advanced running metrics and training options shows a clear advantage against the Apple Watch Series 5. If you are a runner, this is a great feature to have. 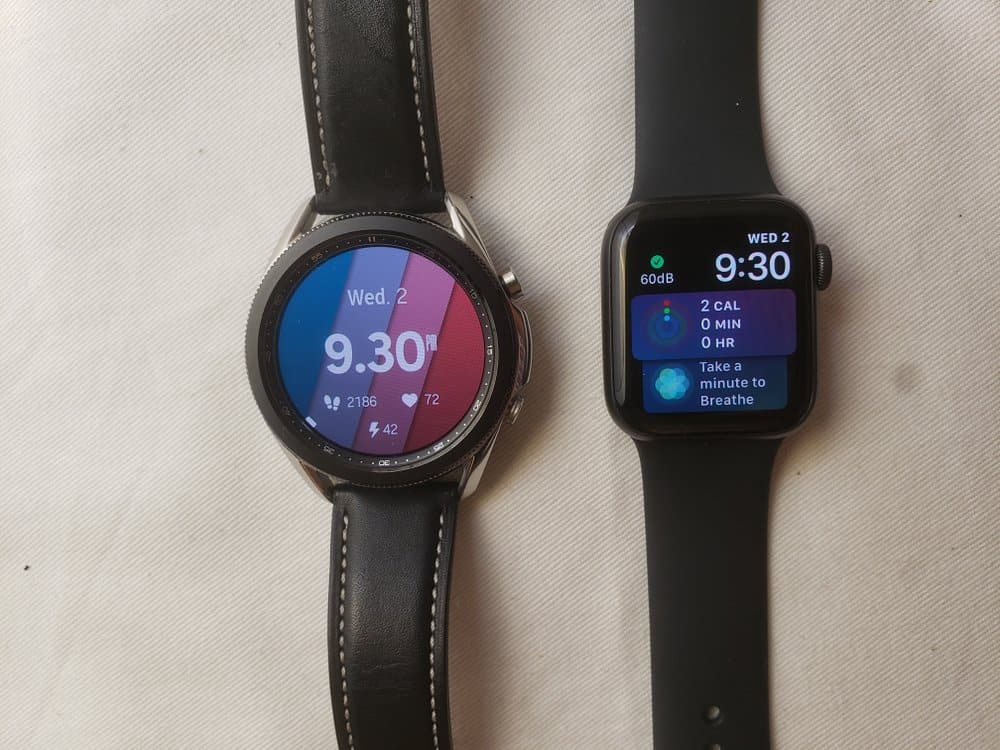 The Apple Watch Series 5 is the winner. It’s just a better everyday watch because of its superior integration with the iPhone, superior voice assistant and superior speech-to-text functionality.

The Galaxy Watch3 has a slight advantage over the Series 5 in its running coaching, but that is ever so slight and contingent on whether you are a keen runner.

But since we’re in a siloed, platform-specific world, both watches still can only appeal to a certain user base. Still, I really like the Apple Watch Series 5. It’s just so impressive.