Skip to Content
Maximize the power of your Apple smartwatch by adding a useful keypad. Check out our top 5 keyboard apps for your wearables that are innovative and indeed helpful. 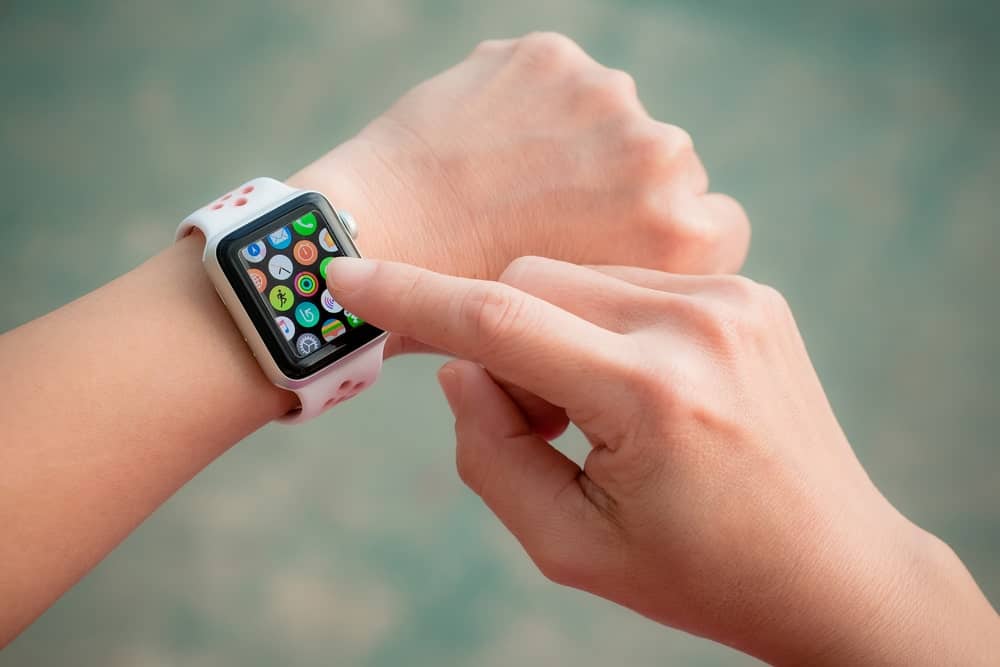 Smartwatches can do anything your phone can, with one exception – keyboard typing. That is quite a challenge considering the only option built into the Apple Watch is voice-to-text. It can get the job done, but it is not always the best method when you are out in public, have a speech impediment, or a voice that simply befuddles dictation software.

Having a normal keyboard should be a standard option available on all devices, but until then, there are a handful of apps available to help you out. However, be sure to keep in mind a couple of caveats: what would be considered a simple solution presents unique challenges for the developers. In fact, it has not been widely attempted, with very limited choices in the various App Stores. Although the three apps highlighted here did their best with the obstacles, keep in mind a couple of things you just will not be able to get around.

The most obvious one is the very small amount of screen space available on any current smartwatch device. Cramming 26 letters and punctuation into a 38mm screen is no easy feat. Here is one you may not know though: Apple currently does not support third-party keyboards for their watches, unlike the iPhone and iPad. If you use one of these apps, you will need to open the app, type within it, and send messages to your contacts from the app. You will not be able to do this from the current built-in Messaging app.

We found three deserving mentions in the Apple App Store. These developers had interesting ideas to make a keyboard work on the Apple Watch; not all are conventional, but they are innovative and are currently available to download or purchase.

Here are the ones you can check out in the app store:

FlickType Keyboard is by far the most popular keyboard in the Apple App Store, and it is as basic as it gets. FlickType is the closest you will get to a QWERTY keyboard if you are looking to go the more keyboard traditional route. The bottom half of the screen has the full keyboard and the top half previews the word you are currently inputting. The app does not expect your input to be fully accurate — you should type where you think the letters in your words are, and the app will predict what it thinks you meant (just like the early 2000’s T9 predictive text). Think of it like auto-correct taken to the next level. It also includes the typical gesture features familiar to Apple Watch users: swipe left to delete, swipe right to continue on to the next word. Swipe down for punctuation, and swipe up for preset emojis. From the app, you can send messages straight to contacts that have been synced from your phone.

This app had been hyped up until about a year ago, and even now it is the first result when you search for a smartwatch keyboard in the Apple App Store. Users were initially thrilled with its fast and accurate input, particularly for a standard QWERTY board. However, its posting on the App Store notes that it has not been updated in one year. Recent reviews point out performance issues that could be linked to outdated software, such as booting issues and how the app keeps crashing. Just keep in mind that your results with this app could vary, based on the age of your smartwatch and how you use the app. FlickType is free on the Apple Smartwatch, but a subscription is required to use it across any other iOS devices you may own.

This app is not currently available for other operating systems and is not available in other App stores.

If you find a standard QWERTY keyboard too difficult and small to maneuver on your smartwatch screen, a different system altogether may be your best bet. The app Modality Type transforms how keyboards should work on a smartwatch, taking on the challenge of getting letters on the screen quickly and efficiently within such little space to work with. The app works using a block system – the screen has four blocks on the right side of the screen, where letters are grouped by their shape. In a way similar to but faster than T9, you tap the block with your letter only once. Do this for all the letters in your word until the word shows up on the left. You can choose this word to add to your message or scroll down for other options. Think of it as a new-age Predictive Text, but with less work. If you keep scrolling, you can see all the regular punctuation available such as periods, semicolons, colons, exclamation points, both double and singular quotes, question marks and more. Once your message is typed, you can send it to your list of imported contacts.

There is a bit of a learning curve involved, which is a turnoff to some Apple Smartwatch reviewers. The general feedback is sparse but positive; once you get the hang of it, users say it was much easier to use than a traditional keyboard. Modality is $2.99 on the app store. 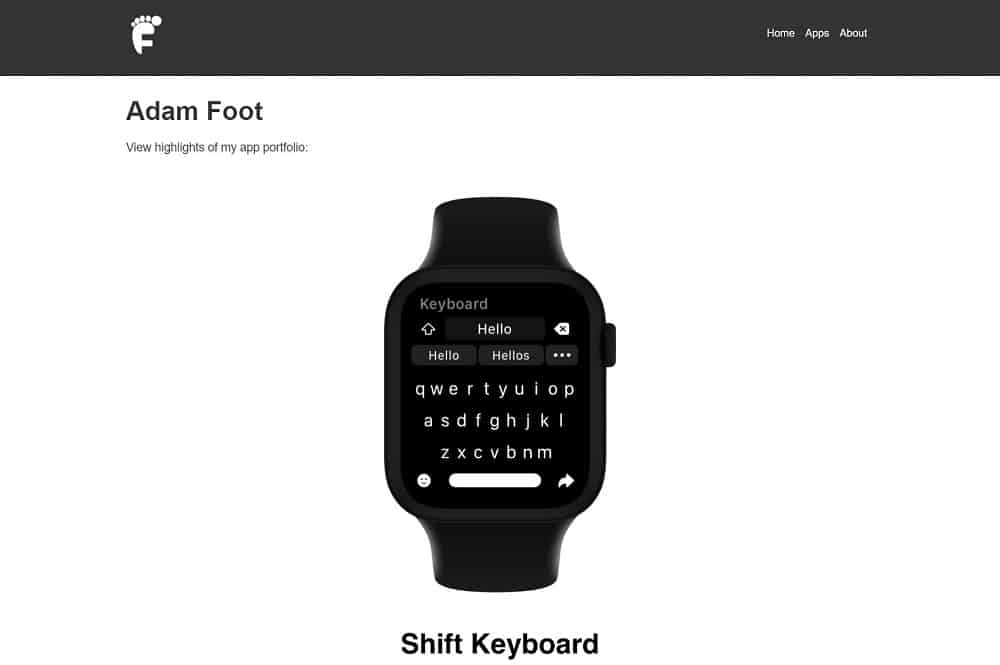 Shift App is the keyboard app that gives you various options on how it predicts your texts and what layout you use for letter input. Besides the standard QWERTY board, you can also use the alphabetical input or AZERTY keyboard (which is a fantastic option for European users or those in which English is a second language.) There are two methods to choose from to type words quickly: full and precise. The full keyboard has the full alphabet available on the screen, with no scrolling. If you want a little more accuracy, use the precise keyboard that spreads the letters out over the screen, making them larger. This option ensures that you always hit the right key. The Shift app offers other standard features such as autocorrect and predictive text options.

Most reviews commend the precise keyboard for its larger text, especially for those who cannot see small letters, have a harder time with accuracy on small screens, or have larger fingers. Many of the critical points were taken care of by the developer: for example, in previous versions users needed to scroll to access letters. The developer is active on all reviews and seems to take the feedback to heart, so expect this app to stay up-to-date with better features coming. Shift App is $1.99 on the app store.

This app is not currently available for other operating systems and is not available in other App stores.

Keyboards we would have loved to see

Many of the early prototypes had great ideas that were later incorporated into the existing apps available for free or for purchase today. With their pros and cons, these apps set a good foundation for stronger keyboards in the future. We hope if Apple decides to add a keyboard or allow third-party integration, they will consider some of these features.

Take a look at the keyboard ideas you won’t find anywhere else:

A group of developers in Australia understood how difficult it is to fit 108 QWERTY keys into a tiny interface, and created a system with grouped letters along the edge of the watch with the inputted word inside. They boasted that this app would work just like T9 keyboards used to (which is easy for anyone who texted in the mid-2000s to pick up.) Letters are arranged alphabetically in eight different “keys,” and you press on the key the number of times it takes to get to the letter you want. For example, if you need to type the letter E, you would press the first key twice. Common gestures were also added, such as tap for space, swipe left for backspace, swipe up for a shift, and swipe down to enter. You could also select a separate keyboard to add punctuation and emojis.

This app seems to have had the best of both worlds: a keyboard that saved space and was easy to learn. The design is the cleanest of all the keyboard apps reviewed and appealed to an audience that has been texting for the past 15 years. Unfortunately, the app has not been updated since 2016, and it was never released for Apple Watch.

Over 300 backers raised AUS $11,066 on Kickstarter to help develop and launch the app.

Here is the original Kickstarter listing

Another attempt at a completely different keyboard style, FLOKI created the “first fully customizable keyboard that uses gesture chaining to maximize functionality in minimal space.” This app appeared to be a combination of Modality Type and Swipe Type, with multiple letters kept in a small number of boxes. Instead of pushing the button once and having the app guess the best word, you would hold down the box and swipe to the right to choose your letter. This functionality is similar to those who are familiar with Apple’s keyboards and utilizing extra features, such as a tilde for a letter in a different language other than English, or for more punctuation in the punctuation keyboard. For example, if you were looking for the letter C, you would go into the box that has “ABC,” touch that box and while still pushing down, and swipe or drag your finger right until C is selected.

This could have been a great transition for those who prefer to use a swipe keyboard on their phone. However, this prototype was ahead of its time, and Modality ultimately made it quicker to choose letters to create words.

Unfortunately, this app was backed by only two people, achieving only $51 USD out of its $35,000 goal in 2015. This app was never fully developed and launched to any App store.

Here is the original Kickstarter listing