Skip to Content
Corduroy pants work well with a blazer or jacket if paired properly. Here are a few tips on how you can wear this combo outfit creatively and without overdoing it. 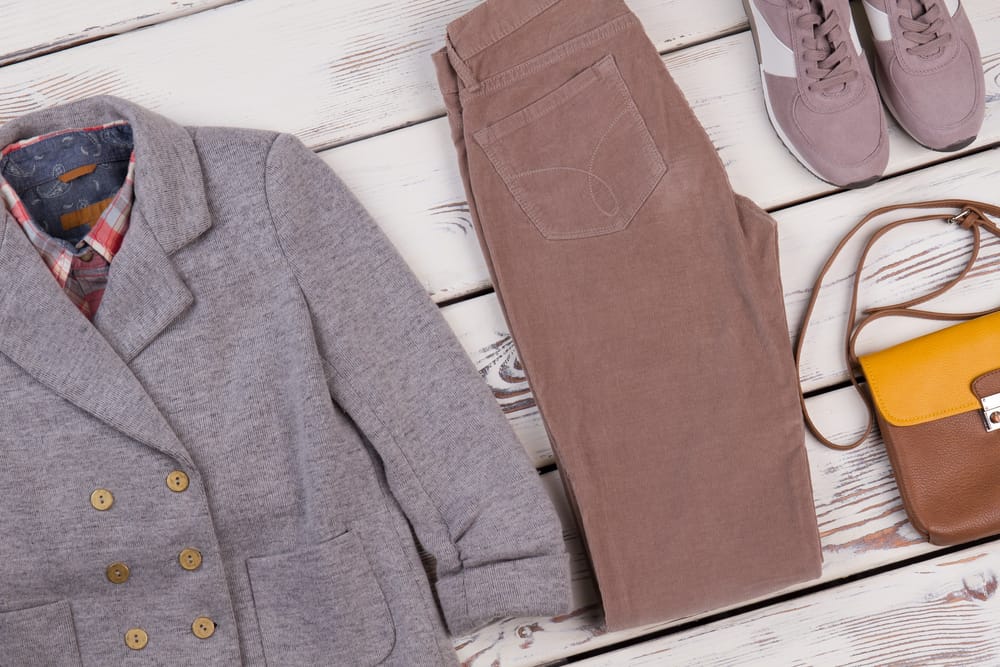 Macy’s still sells the classic gold corduroy suits for men like the one Steve would have possibly worn to Miranda’s law firm’s annual dinner if she had let him. I’m not against corduroy, but think there’s something about “too much” corduroy texture in obscenely bright colors.

I don’t have enough time to tell you what’s wrong with corduroy.

Even back in 1999, when “Sex and the City” Season 2, Episode 10 first aired on TV, I used to still wear corduroy sometimes. Apparently, the SATC character Miranda would not have approved. However, I would argue that “corduroy” wearing is not the “real” problem, and neither is wearing a blazer with corduroy pants.

Regardless of my gender, I wouldn’t want to wear an outfit that makes me look like a cowboy unless I were writing a horse. Besides, most cowboys seem to prefer wearing jeans with leather boots. Now, I will present what I would call more acceptable and aesthetic ways to wear corduroy for either men or women.

GQ backs up my defense of corduroy:

“Enter: corduroy. Nerdy, dated, and downright unsexy, when corduroy is bad, it’s really bad. Done right, however, it’ll free you from every stereotype, keep you warm in the winter, and make you look incredibly rich.”

Knowing that you might not have to toss your vintage corduroy suits, after all, could renew your hope. You’ll also feel relieved at how warm you can keep yourself during the chillier months of the year. Keep reading and learn. 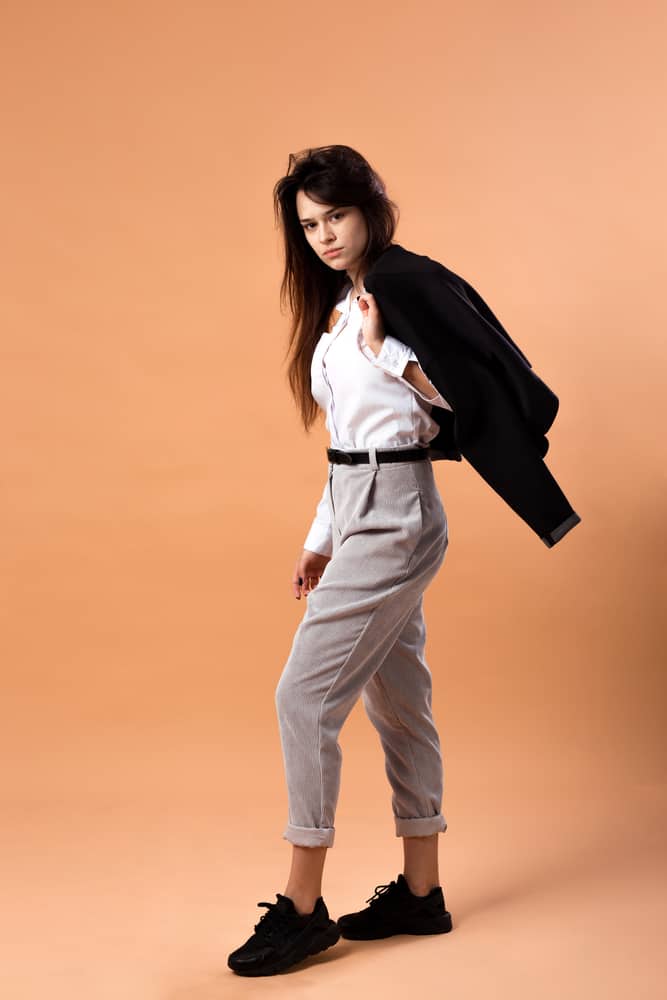 You’ll benefit from finding creative ways to wear an all-corduroy outfit when summer breezes eventually turn into frosty winds. You can pull off the “light and dark” style if you choose a light top contrasted with dark or the other way around. 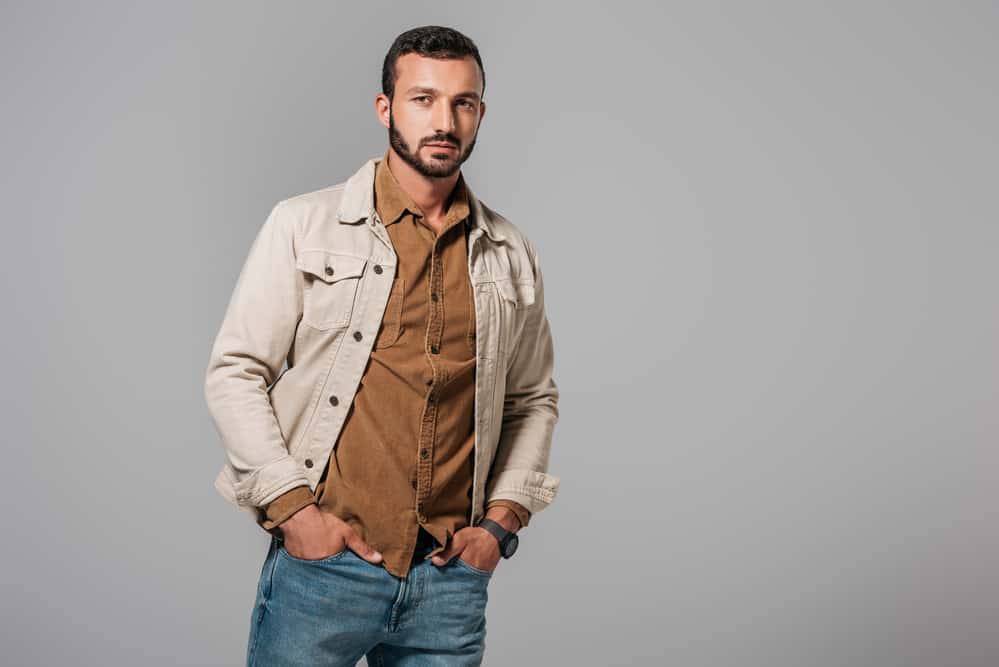 You could wear a blazer or jacket lined with a plaid shirt and a t-shirt under that. Otherwise, perhaps wear the corduroy pants instead of jeans or just make the jacket your corduroy piece and stick with the denim pants. If you switch – wear the corduroy as a blazer instead of as pants, you can also pair that corduroy blazer with solid-colored dress pants.

It seems that you would have more options if you stick with corduroy on top instead of for your pants than the opposite way. The black looks slick and “tones down” the corded fabric appearance. However, you could try one of the medium or dark brown shades, which sometimes resemble suede materials.

3. Separate and Repurpose Your Suits

A Virginia tailor says, “Unless you’re wearing a coordinated suit, do not wear more than one corduroy item. Either choose pants, a blazer, or a vest, not all three.”

That tailor’s statement backs up what I suspected all along. Too much corduroy is just too much, but you can salvage your vintage corduroy outfits if you separate the tops from the bottoms. Now, you may “get away” with a coordinated suit as the tailor suggests. However, you’d be better off not having both your blazer and pants the same color. 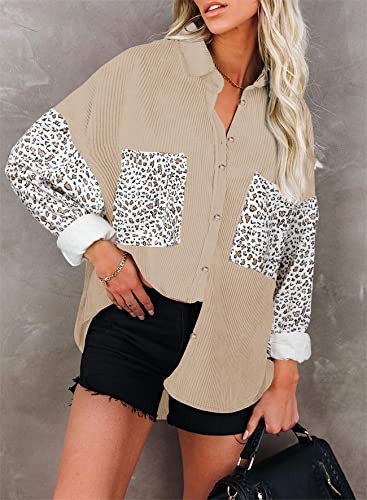 You don’t see print corduroy often, but it does exist. Use the same principle as you would with the solid colors. It’s best to only have one print clothing article or accessory and the rest solid. With that in mind, don’t overdo how much print you wear. For instance, you probably should avoid wearing both a print corduroy top and bottom.

In some cases, you may pull off textured camisoles under modest corded fabric patterns. However, don’t distract your primary corduroy top clothing layer with an undershirt that’s supposed to be a secondary article. That’s what could happen if you mix and match not only too many prints but also too many textures in your outfits.

So, What About the Corduroy Pants with Blazer? 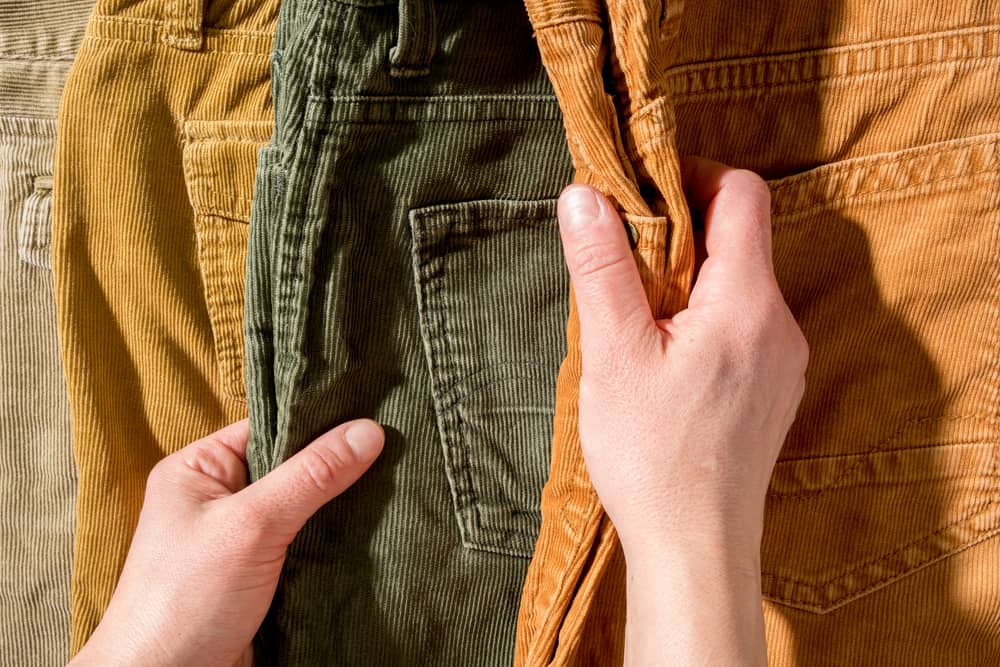 “Challenge accepted,” is what I say when I think about how to “look cool” when wearing corduroy. When in doubt, subtle instead of flashy is always best like in this above example.

Corduroy pants work best with blazers if the pants are dark and the blazer is light. If you want more color added to your outfit, choose a plaid shirt to layer underneath your jacket or a plaid scarf if it’s cold outside.