Nowadays, golfing has reached a whole new level with certain golf apps that can track your game with your smartwatch. So if you are just a casual golfer or a hardcore athlete, these Golf Apps for your Smartwatches will surely be to your advantage. 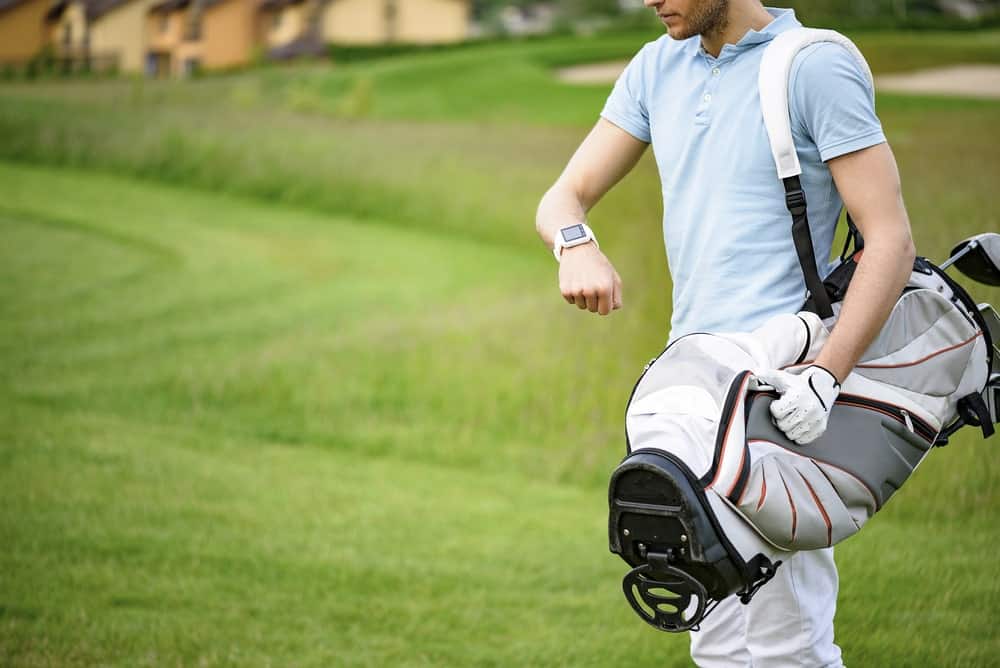 When cavemen played golf, all they had was a stick, a rock and an open piece of land with a hole in it. Today we’re much more fortunate than that. Throughout the 20th century, balls got tighter, drivers drove longer and the quality of equipment and advice kept trending upward.

In the 21st century it gets even better. We now have technology to take our game, and our enjoyment of it, to new heights. First there were smartphone apps that tracked yardage and score and helped you with your swing, but you had to take those out of your pocket every time you used them. It was inevitable that eventually you’d be able to wear all this information on your wrist.

Still, I wasn’t sure I needed one of these new-fangled smartwatch golf apps. Would all that data dangling off my wrist compromise my swing? In any case, I decided to investigate these magical new golf devices with an open mind. There are lot of smartwatch golf apps out there, and more are coming all the time. Here’s a brief survey of what’s available so you can move into the third millennium and keep that phone tucked out of the way.

Most of the smartwatch apps are similar in the functions they offer, and similar to what you can get on your smartphone. Almost all of them have a library of golf courses from all over the world, and will either download the course you ask for or know where you are and offer you the course you’re close to or already playing on. From wherever on the fairway you happen to be standing, they’ll show you distance to the pin and the distance to all the hazards between you and there. Accuracy tends to be within a few feet. There are satellite views, weather and wind reports and, in some cases, 360 degree augmented reality views.

Many apps have “virtual caddies” that will suggest which club you should use and provide coaching tips. They’ll capture results and compile and retain boatloads of statistics, either on the phone or uploaded. They also do score tracking, usually not only for you but also for your entire party. They handle a variety of scoring formats, including match play and tournament play.

Most of these apps focus on range finding and score tracking, but there are a few that offer something completely different. Zepp Golf, for example, tells you about everything you’d want to know involving swing analysis. For the most part, however, these apps are into finding youself on the course and keeping count of your shots. Some go a little further in doing so than others.

While most of these apps are initially free, the premium features typically require a subscription. Most are in the range of 20 to 100 dollars a year. That’s less than many of your Saturday outings, when you consider the price of greens fees, a cart and a round at the 19th hole for your buddies.

Most are available for both Apple Watches and Google Wear. A few are Apple only. Some work with the Samsung Galaxy.

With a few exceptions, golfers are happy with these new gadgets. Reviews show a preponderance of 5-star ratings. For most of these apps you have to go looking for bad reviews in order to find them.

There is so much in common in the features offered that may be hard to know which one to start with. Reading the descriptions and the user reviews is a bit like reading the same story over and over.

So here’s my recommendation. Download one or two or three and try out the free features. When you find the one that strikes your fancy, sign up for a one-month subscription for the premium stuff. It’s a fraction of the cost of a yearly fee and will cost you about as much as that beer at the 19th hole. Often there are free trials for the premium versions. Eventually you’ll find the one you want to spend your days on the course with.

To get you started, here’s a list of what’s out there. The golf courses will be opening for the season before you know it, and this is the year to take your game to the next level with a new tool. If you’re already using one of these on your smartphone, keep that phone in your pocket or leave it back in your locker. And save the money you might have spent on an expensive standalone rangefinder. Manage your round with just a glace at your wrist.

A lot of reviewers call this one the gold standard. It pretty much does it all. It offers augmented reality (AR) views for tens of thousands or course and hundreds of thousands of holes. You can look at your lie from about any angle you like. Its GPS capabilities give you distance to the green as well as the distance to hazards and targets. It will track your score, along with what club you used and post your results to your Handicap Index. Available in-app purchases provide tips, drills and even more detailed statistics.

Despite its name, this Grint doesn’t steal Christmas. Handicapping and scoring are its bag. You can see where you stand compared with your compadres and with a leaderboard. There’s also a tournament organizer tool. Golfers have complimented TheGrint on customer service. Despite its focus on scoring, it doesn’t scrimp on the GPS functions. It includes a rangefinder and claims that if your course isn’t on there, you can call and they’ll add it.

Hole19 has the full gamut of GPS rangefinding on tens of thousands of courses, plus all the expected scorekeeping capabilities, as well as course rating and reviews. It tracks useful stats such us driving accuracy and greens in regulations. User have praised its simplicity and accuracy. A few have reported glitches but they seem to be getting cleared up.

They call themselves the “top rated golf GPS rangefinder and scoring app” and work to back up that claim by highlighting their best user reviews. One says accuracy is within two feet. GPS provides aerial maps and elevation on over 40,000 courses worldwide, as well as a full range of scoring tools. The interface is straightforward and easy to read on a watch face.

Zepp is a different kind of tool from the other smartwatch golf apps. It’s a swing analyzer and golf coach. You let the watch do the work or attach a sensor to the back of your glove, and Zepp gives you more detailed information about your swing than you ever realized you needed to know: club speed, club plane, hand plane, backswing position and time ratio of backswing to downswing. Experiment with Zepp off the course and use what you learn to lower your score. It will compare all these with the pros. Zepp also make performance tracking apps for baseball, softball and tennis.

The smartwatch app is available for Apple. It’s free, but there’s more functionality with the sensor, which sells for around $150.

This downloads the course you’re playing on and does GPS tracking, so you don’t need in internet connection while you’re out on the holes. It also includes swing and putt analysis. It uses your watch to measure your swing speed, swing plane and your grip. This is strictly an Apple application for iPad, iPhones and Apple Watches. It reports weather and wind direction. It also includes the usual score tracking functionality. Reviewers have commented that, more than other golf apps, this one seems to have designed with a watch in mind.

This Swiss product was formerly called Fun Golf. It tracks distances to greens and hazards, provides an interactive course map and tracks scores, follows the leaderboard and offers club recommendations. You can analyze the course to evaluate the lie of the land and hone your strategy.  Not everyone is crazy about the transition from Fun Golf but for the most part reviewers are happy with the new app.

This provides the usual gamut of GPS distance tracking, scorekeeping, tee time management and tracking of your shots. You can find and book an open spot on thousands of courses. Live coach is always available to help out in difficult lies. Some reviewers claim that the display is getting a bit cluttered. On the whole, though, golfers are posting positive reviews.

Available features include GPS green and hazard distance tracking, scorecard and handicaps, shot tracking, wind speed and elevation. There are also tips and coaching sessions available. The more advanced features require an upgrade to a version they call Looper, which they describe as their “AI-powered digital caddy.” A few of the reviews quibbled about distance accuracy, but, as with most of these products the majority of golfers were satisfied.

This app can make the impressive claim that it comes from TaylorMade. It provides GPS tracking, round tracking statistics, and scorekeeping for you and your foursome. However, reviewers don’t speak as highly of it as they do of other apps. Complaints include slow response, requiring too much input and lacking the expected GPS distance functions.

This is an app that focuses on greens play. While it does GPS tracking for the entire course, it specializes in the putting game. It maintain a library of greens from all over the world and tracks your putting performance. It reads the green for you and with a detailed map of the gradients helps you line up your putt. It’s heavy on statistics but light on ones you can get without a premium subscription.

This is low-feature app compared with the others, but almost everything if offers is free or at a one-time cost three dollars or less. It will know what course you’re on, tell you distance from the green and track your scores. You can also take pictures of your swings on your iPhone and watch them on your watch. It tracks your shots without your having to enter them.

This one has the GPS rangefinder tools, but what it really hangs its hat on is the scoring features. There are plenty of testimonials about how well Golf Game Book supports different scoring scenarios. It has a digital scoreboard, a statistic tracker and it supports tournament set up and a variety of scoring options. One selling point is that its add-on costs are lower than for a lot of other apps.

This app claims the usual assortment of GPS rangefinding, shot tracking and score management. However, it has more negative reviews that any other product I’ve looked at. Many comments say either it doesn’t work at all or the course data is inaccurate. You may be able to download to a Samsung Galaxy, though users’ results were no better than with Apple or Android.