Samsung and Mobvoi's flagship smartwatches go head to head. But will the ageing Ticwatch Pro hold its own to the new and shiny Samsung Galaxy Watch3? 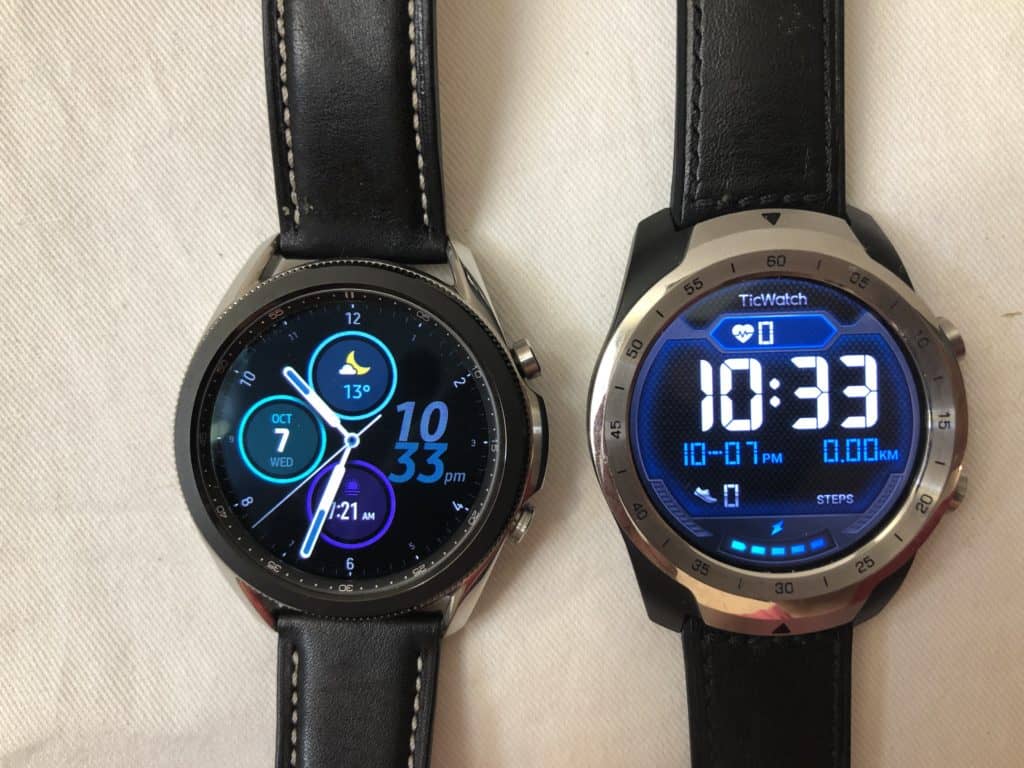 It’s the same story with the Samsung Galaxy Watch3.

They’re both great smartwatches and both have premium features.

The Ticwatch Pro is priced much more reasonably than the Samsung Galaxy Watch3 and that’s one of its biggest advantages.

The Samsung Galaxy Watch3 commands Apple Watch prices. But is it justifiable?

The Samsung Galaxy Watch3 has a fantastic, sharp and vivid screen. It fulfills all my expectations of a premium smartwatch.

However, the Ticwatch Pro has something even more amazing. It has the dual-layer display and that has always been something that I really loved.

It’s innovation that no other smartwatch has. I love seeing innovative things.

The dual-layer display on the Ticwatch Pro places two displays on top of each other. When your smartwatch goes into the “always on” mode, its LCD screen will be shown. The LCD screen saves a lot of battery because it doesn’t require backlighting.

And if you shake your wrist or press one of its buttons, it will wake up the LED screen. There you get all the regular functionality expected of a smartwatch.

The LED screen isn’t the best. It seems to have a cool tint to it and has less pixels than the Galaxy Watch3, but is nonetheless sharper.

But I think the Ticwatch Pro’s dual-layer screen wins this one because of its innovation. 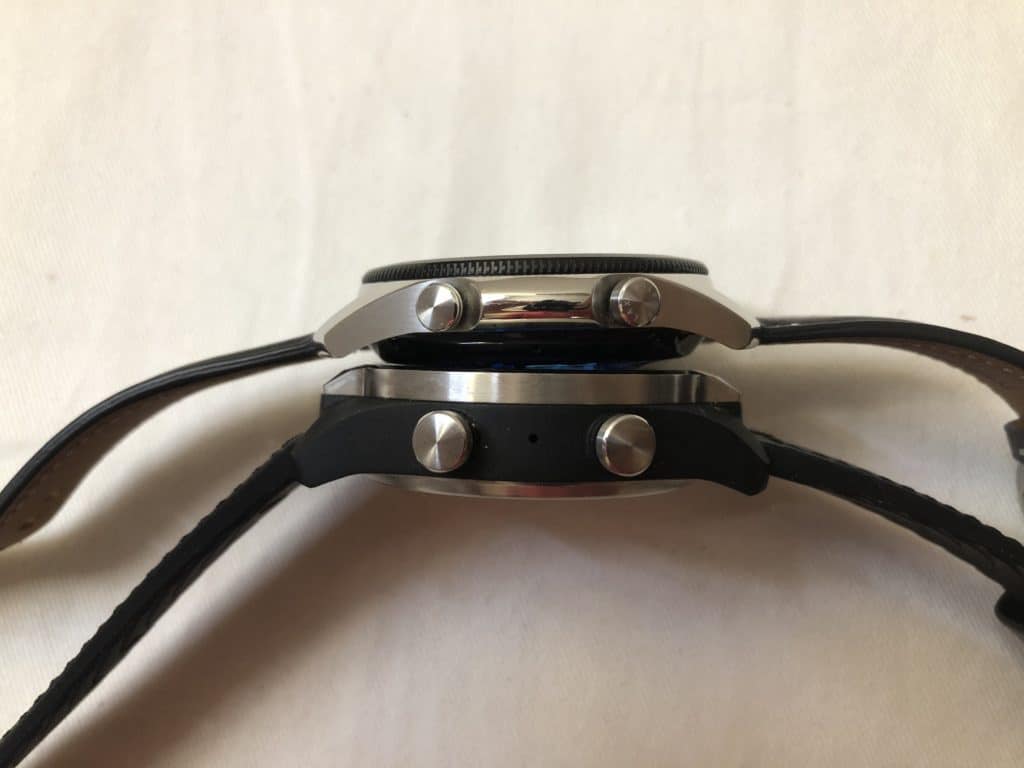 The Ticwatch Pro is really thicc and heavy.

It’s a big departure from the all-plastic cases that the entry-level Ticwatches, the E2, C2 and S2, have. The Pro has a rear and front made of metal and the sides are made of plastic.

It’s a really heavy watch. And likely because it has two screens, it’s also a thick watch.

The Samsung Galaxy Watch3 has slimmed down a lot as compared to the Galaxy Watch. It definitely looks more modern

The whole reason for the dual-layer display is so that you can have longer battery life.

But compared to the Samsung Galaxy Watch3, I don’t really notice a longer battery life.

I’d say the Ticwatch Pro lasts for one to two days max, unless you use its Essential Mode which deactivates a lot of its smartwatch capabilities and uses only the LCD screen to save battery life.

The Samsung Galaxy Watch3 can last for up to two days with its always on screen mode turned on. That’s even better than the Ticwatch Pro since you’ll always be seeing your watch in full colour.

The Tizen OS is Samsung’s own operating system for smartwatches while the Wear OS is backed by Google and available on many smartwatches.

The watch faces from Samsung have always been preferred by me because they are generally better designed.

The watch faces from the Wear OS are generally less attractive but still very utilitarian. Mobvoi (the manufacturers of the Ticwatch Pro) create different watch faces for their smartwatches but I never found them to be very attractive. Luckily, they work just fine for telling time and other tidbits of information.

The Wear OS is an automatic champ in this area.

I haven’t seen any voice assistant which has the dynamism and reliability of the Wear OS’s Google Assistant.

The Samsung Galaxy Watch3 has Bixby, and while Bixby has made great strides in the quality of its user’s experience, it really has a long way to go.

One area of difference is when you throw both systems a random question. If you ask “Where is Australia,” Google Assistant will search the web.

Whereas Bixby will just give up.

Bixby isn’t completely bad or useless, though. It can take away the tedium of tasks like starting timers or finding out about the weather.

The difference is that Google just does it better in terms of its breadth of capabilities.

The other aspect to it is the speech to text function that’s just better on the Wear OS.

Being able to transcribe text accurately forms the basis for many things. If we’re talking about using the voice assistant, Google’s better transcription means you will be more successful with your queries.

Indeed, I have found that while Samsung was just OK in terms of its success rate, Google was mostly successful in understanding what I wanted.

Now, this leads me to another point: texting and emails. 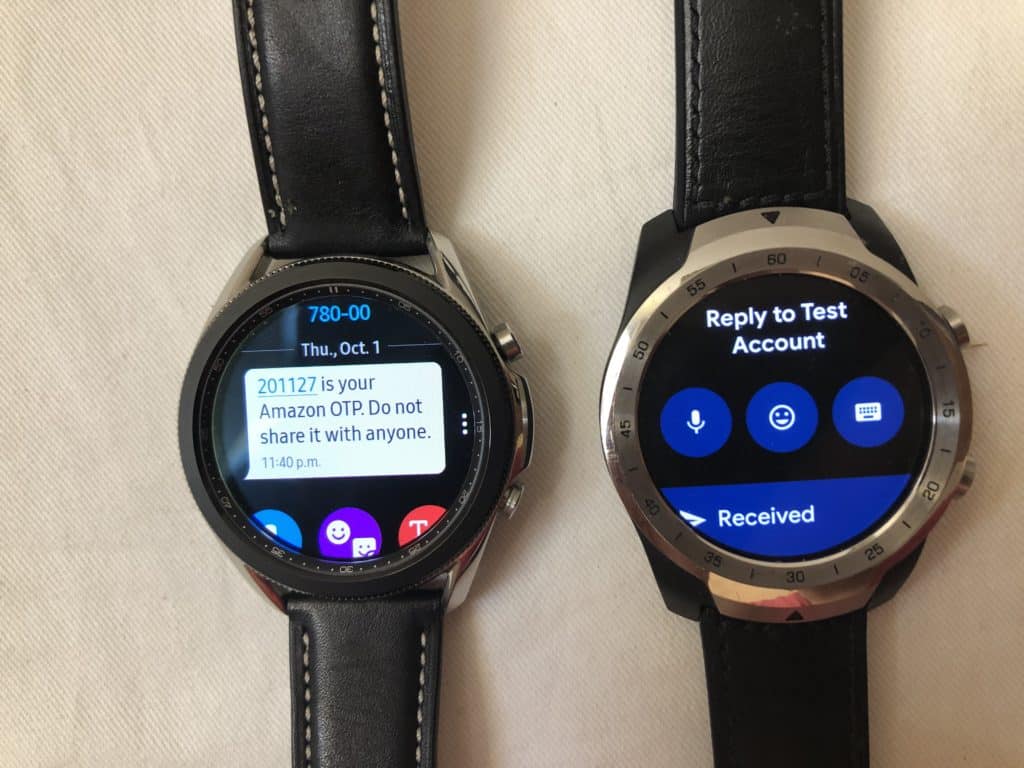 One of the most important functions on a smartwatch is notifying you when emails and texts come in so you can prioritize.

I like that both systems integrate really well with Android phones. You can reply to these notifications directly on the watch.

If you are paired to a Samsung phone on the Galaxy Watch3, you get the bonus of being able to access your email and message logs. I don’t really find it to be very useful, but it’s a nice feature to have.

When texts and emails come in, you can reply to them. Both OSes offer you a choice of replying with pre-composed messages, a keyboard or by drawing letters to form words with your finger.

With the exception of the pre-composed messages, which are limited to one-liners, the rest are very tedious to use.

So, this is where I almost always use the speech to text function. I find that it’s still the quickest and easiest.

Samsung’s transcription has been getting better and better. However, if you want the most accurate transcription, Google is much better at offering that, and that’s why the Ticwatch Pro wins. 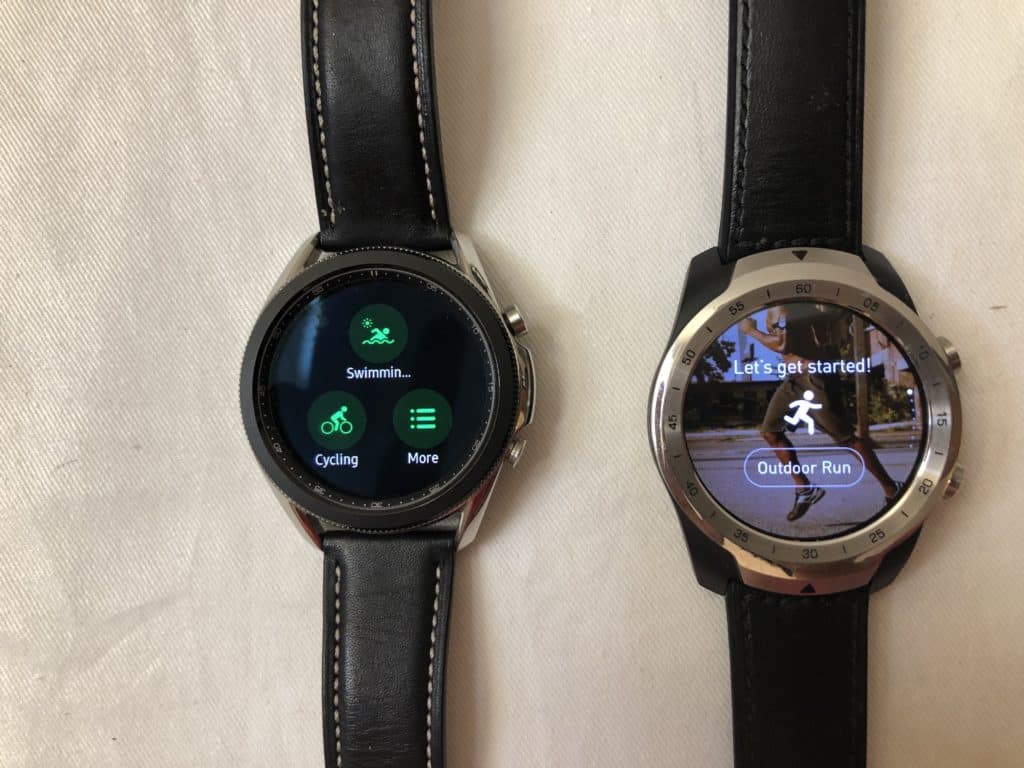 The Ticwatch Pro isn’t suitable to be taken swimming.

If you look at every other Mobvoi watch, they parade the water resistant feature all over the E2/S2’s landing pages. But not with the Ticwatch Pro. I saw nothing of that sort.

It just seems like these days, having a smartwatch that isn’t water resistant is a bit of a flaw. Water resistance has been so common in today’s smartwatches that I sometimes need to remind myself about the Ticwatch Pro.

Both watches can track your workouts and monitor your heart rate, but the Samsung Galaxy Watch3 goes further and can track your sleep. It also has an ECG sensor, blood oxygen saturation sensor and fall detection — some of these features might be disabled in certain regions so check first.

If you’re a runner, you might find the running coach feature on the Watch3 to be amazing. It gives you all sorts of data that goes beyond what I’d expect from a watch like this.

You can find out more about your footwork (asymmetry, contact time, flight time, etc.) and it can estimate your VO2Max to gauge your fitness and whether you have improved over time.

And yes, you can track swims with this watch too. Not with the Ticwatch Pro though. All other watches in its lineup have the Pool Swim app but not the Pro. 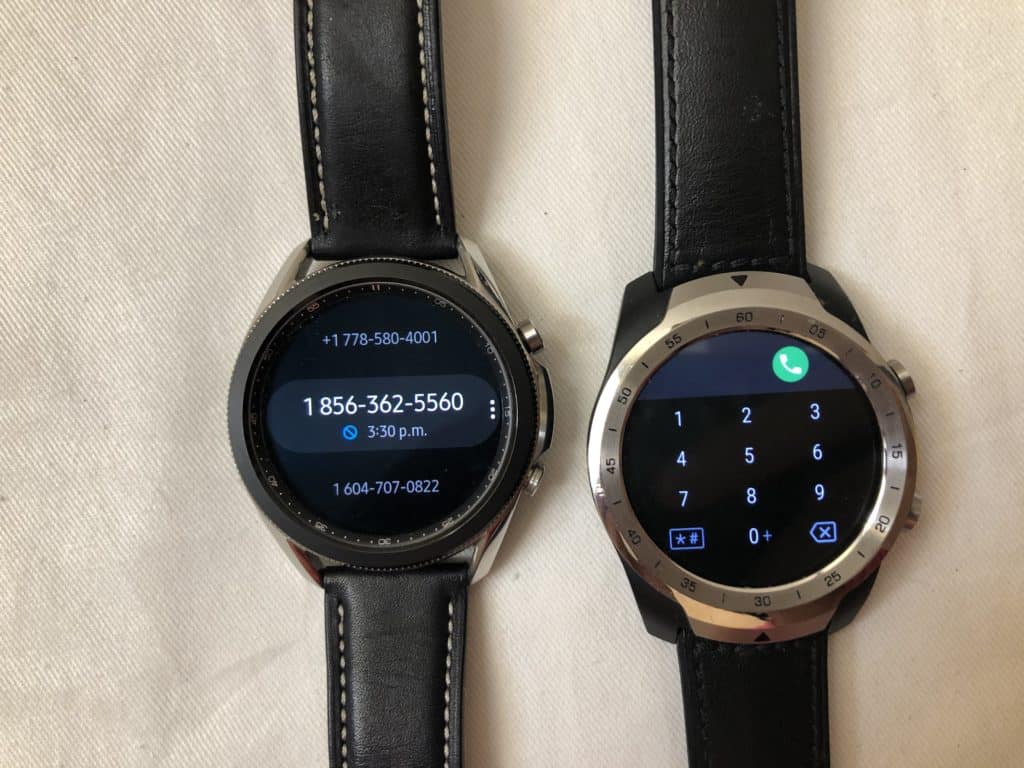 Both smartwatches have a speaker so you can make phone calls and answer phone calls on them. This is a great convenience that I love.

Imagine you’re out running and your phone is stored in an armband. It’s hard to get the phone out. If you find yourself in this situation, being able to answer the call on your smartwatch is really beneficial. 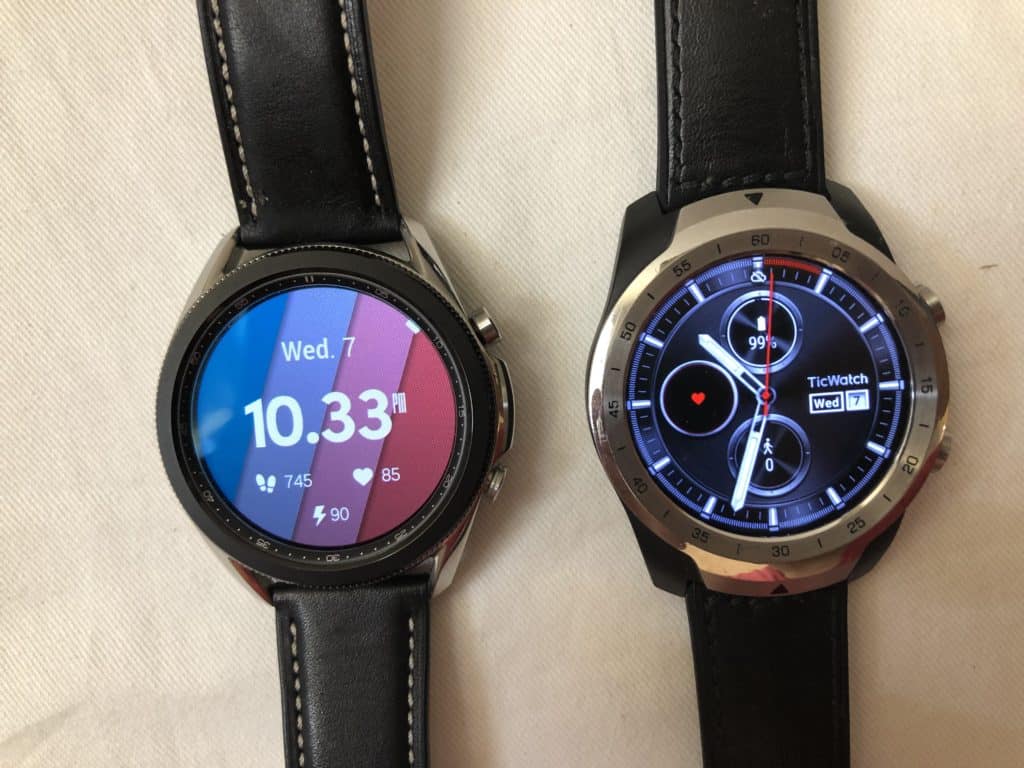 The Ticwatch Pro is a great watch that is a step up from entry-level watches but there are some areas where it can’t compete with the premium Samsung Galaxy Watch3.

I am much happier with the Galaxy Watch3 because of its advanced health tracking features, better screen and better battery life.

However, I prefer the Ticwatch Pro for its operating system, the Wear OS, for its superior speech to text system and its superior voice assistant.

Getting past the premium price tag of the Galaxy Watch3 is a bit of a barrier, though. It’s really expensive, commanding Apple Watch money without being as good as the Apple Watch.