Skip to Content
The Ticwatch S2 offers great value for the everyday watch user, but Samsung's Galaxy Watch/Active 2 goes further... if you are a Samsung smartphone user. 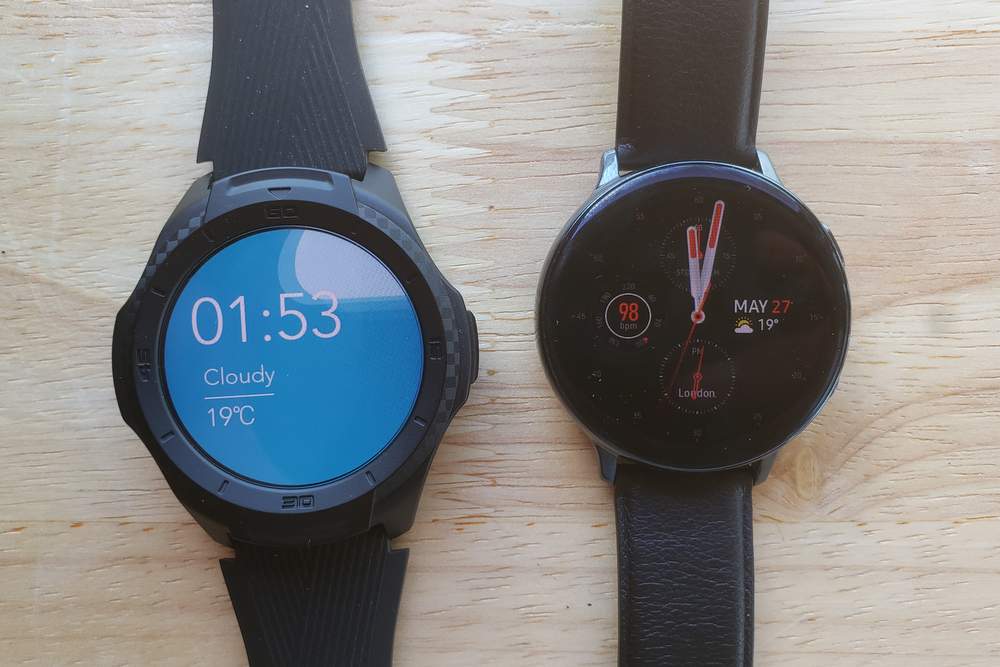 Nothing gives better bang-for-buck than the entry-level Ticwatches and that includes the Ticwatch S2.

The Ticwatch S2 is superior to its competitors because it is more durable, has decent battery life and a good number of features.

Is the Samsung smartphone-smartwatch combo superior?

Wear OS watches like the Ticwatch S2 have positioned themselves as general-purpose watches that can pair and function with any smartwatch out there. Samsung’s smartwatches can pair with different smartphones out there, but they really do best with Samsung phones.

Unlike the Apple Watch Series 5, which is the ONLY smartwatch that provides superior compatibility and integration with the Apple iPhone, pairing a Samsung smartphone with a smartwatch does not provide the same level of superior integration, which is why Wear OS watches provide some serious competition. 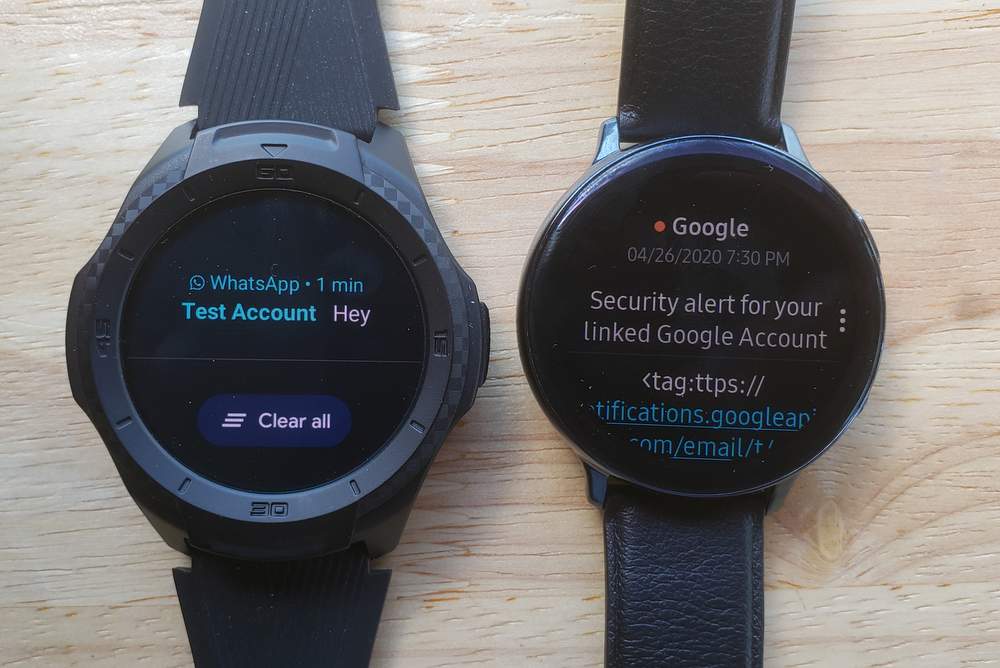 One area where Samsung’s superiority over even the best Wear OS watch out there is its ability to access email and text message logs. That means you can access your messages and emails as if you were on your phone.

Personally, I never felt this was very useful. If I wanted to read a message, I would use my phone.

Now, you can’t do this with a Wear OS watch unless you go through the hassle of installing a bunch of third-party apps. But I never felt that anything was amiss.

When it comes to interacting with my messages and emails, I have always accessed them when they came as notifications. 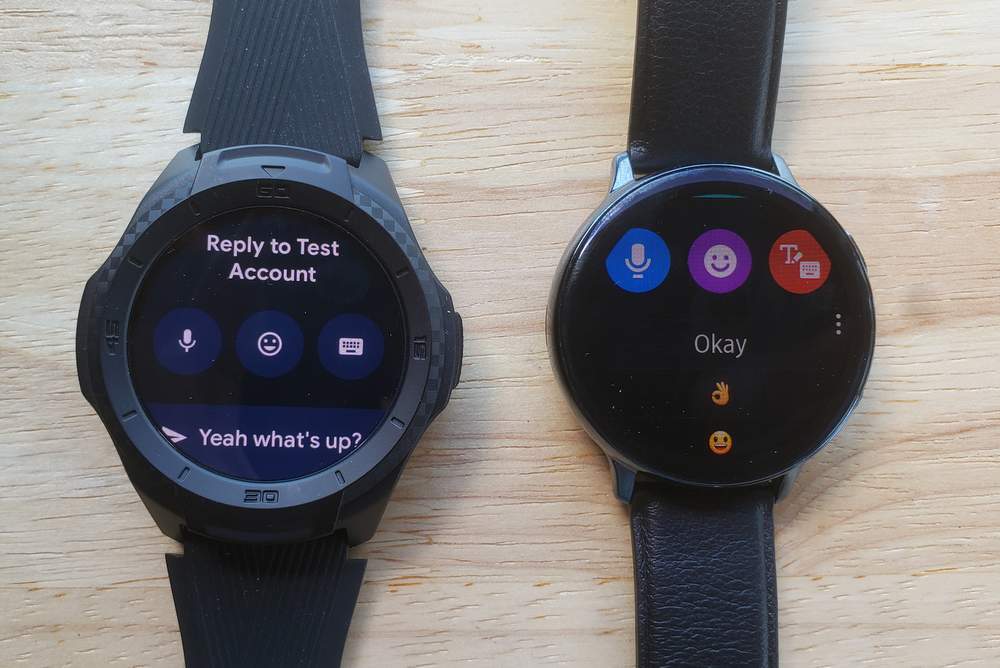 You can reply to your messages without taking out your phone by using the speech-to-text system, a keyboard or a pre-composed reply.

Wear OS really shows its superiority here. The transcriber is just excellent and cannot be beaten by Samsung’s equivalent.

The biggest frustration I have from Samsung is the unreliable transcription. Whereas the Wear OS breezes through this task, Samsung sometimes misinterprets your speech with enough frequency that you’ll go through the five stages of grief.

As you step into the “acceptance” part of the grief cycle, you will resign yourself to using the Galaxy Watch’s T9 predictive keyboard. Yes, this is the same number pad keyboard from cellphones of the early 2000s. It’s tedious, but it’s definitely accurate.

Whereas on the Wear OS, you can use a 26-alphabet keyboard or handwrite letters to form words. But because the speech-to-text system on the Wear OS is excellent, I have rarely resorted to using these. 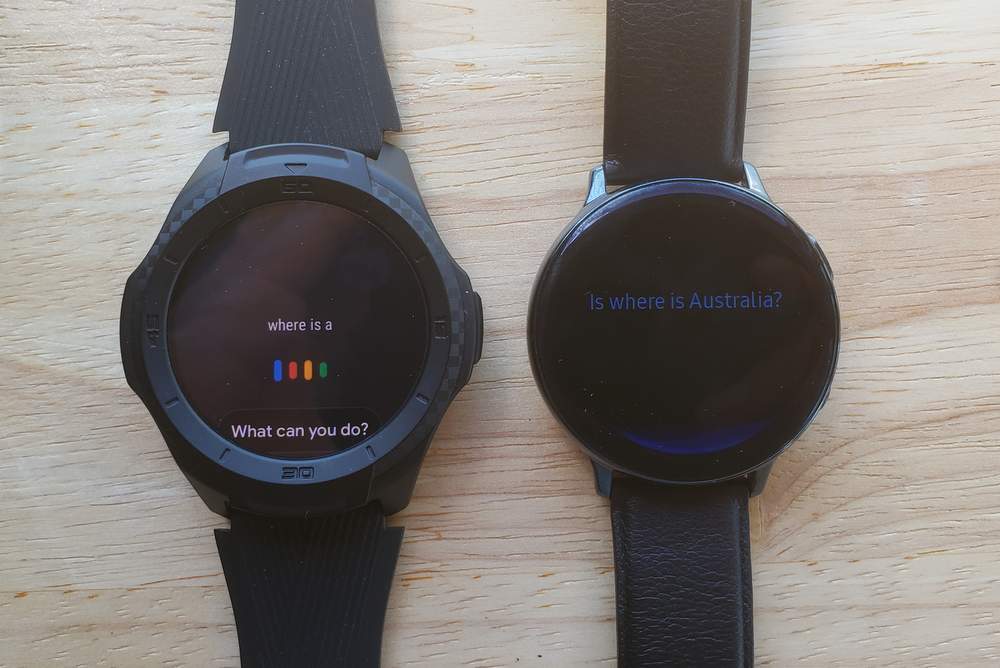 Having a speech-to-text system which is accurate greatly helps the efficacy of a voice assistant, and this leads to an instant initial victory for the Wear OS.

With the Ticwatch S2, you always get better results from Google Assistant, not only because of its superior ability to interpret what you say, but also because Google Assistant is much more nimble with your queries. 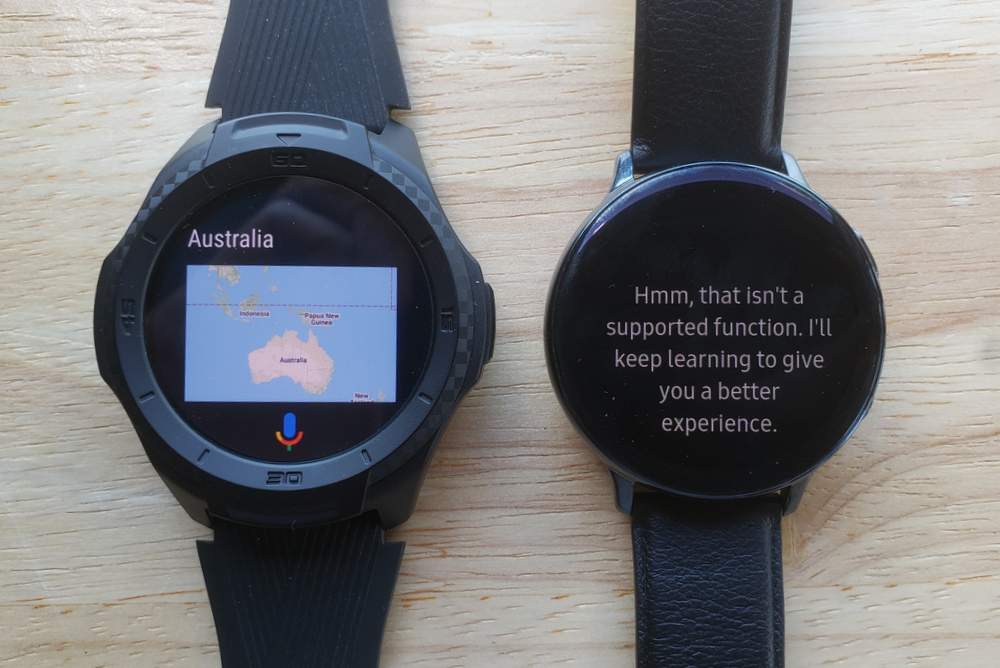 Contrast that to the Galaxy Watch/Active 2’s Bixby and you see a major difference. Bixby has a limited number of functionalities. Bixby’s functionalities centre around the apps that are integrated into the Tizen OS, and unfortunately, that also means that Bixby can’t help you search the web for information, which is what Google Assistant defaults to when you ask it a question that it cannot apply an app’s function towards.

For example, if you asked both Bixby and Google Assistant to start a timer, both will be happy to initiate a timer using the pre-installed app. Bixby might have a bit of a harder time interpreting “for” and “four”. However, if you ask Bixby where Australia is, it will just give up. Google Assistant will show you a map. 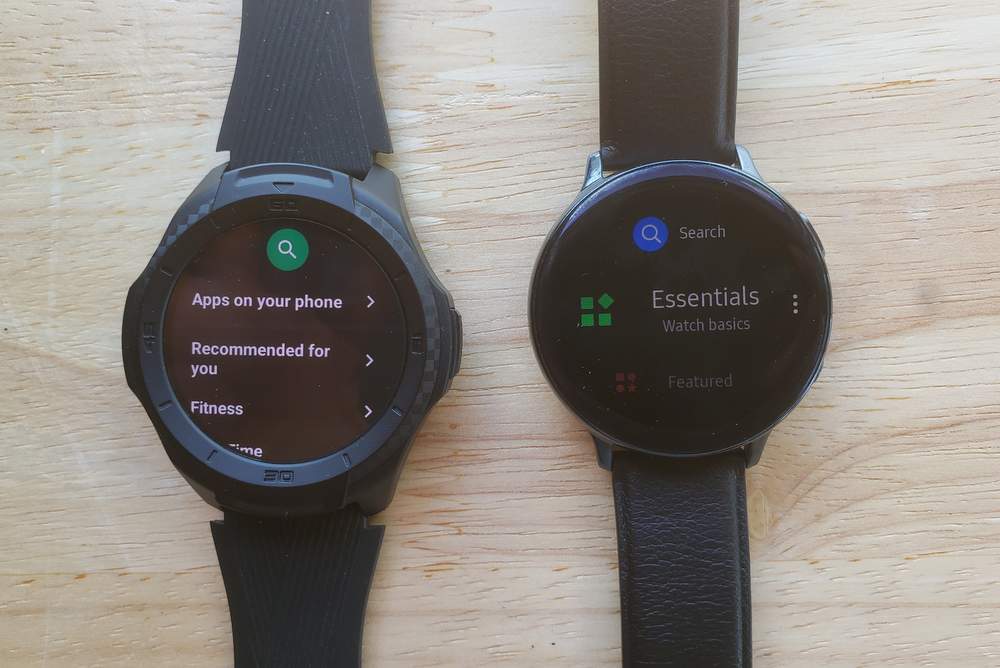 The Wear OS is a platform that is present in the majority of smartwatches and as a result, it also has one of the bigger app stores.

Samsung’s Tizen OS is only featured on Samsung’s smartwatches, therefore it has a smaller app variety.

What I really liked about the Wear OS is its access to Google apps including Maps, Keep and Translate. Google Maps is a really great app to have on your wrist when you are unable to navigate with your smartphone such as when you are cycling(although you do need a smartphone nearby for a data connection).

Up to now, it seems like the Galaxy Watch/Active 2 has few redeeming features. Well, here are some things that I like about these watches…

The Ticwatch S2 does not have a speaker and therefore answering calls on your wrist isn’t possible. As a full-feature watch, the Samsung smartwatches are capable of doing this and sound quality is good.

I really, really like the design of the Galaxy Watch/Active 2.

The Ticwatch S2 is marketed as an outdoors watch but if you’d asked me to choose which watch felt more durable, I’d choose the Galaxy Watch. Its metal watch case really contrasts with the full-plastic exterior of the Ticwatch S2.

That said, the Ticwatch S2 has a  US Military Standard 810G rating which means the S2 is operational between -20ºC to 55ºC; resistant to humidity, dust, and salt fog.

The Galaxy Watch Active 2 feels very modern and stylish with its curved screen edges and round design. It reminded me of the Mini cars, where much attention was paid to ensure there were no right-angles or sharp changes in direction. It also comes with a leather strap. 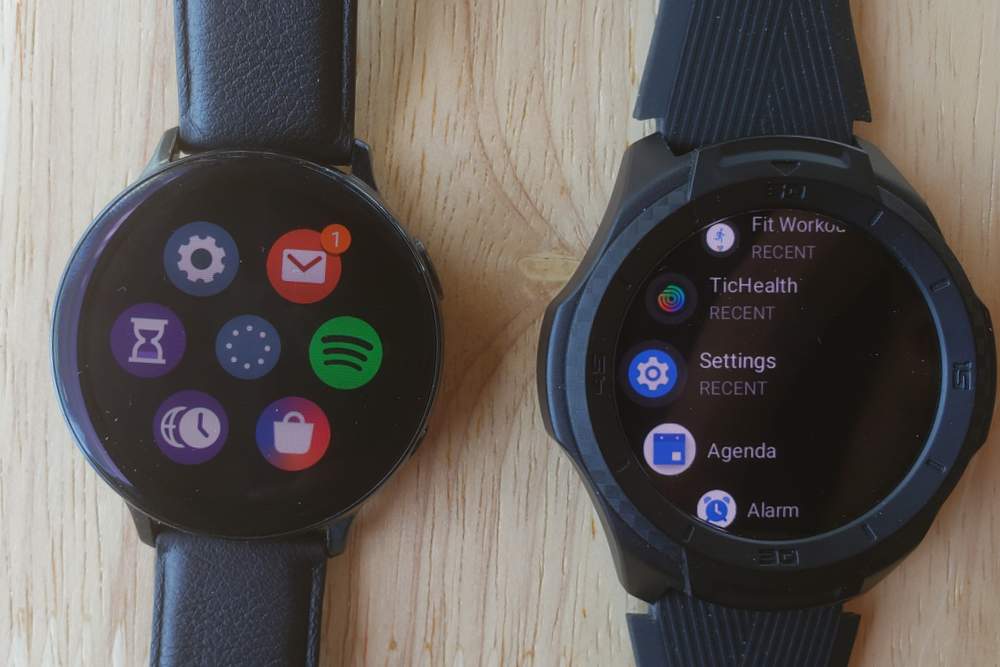 The Tizen OS is also much more prettier. App icons are laid out in a circle following the circumference of the watch case. Watch faces are much better looking than the Ticwatch S2’s offerings.

The Ticwatch S2 and Wear OS, feel very utilitarian in contrast. It functions well and is easy to use, but otherwise, it is really utilitarian. Like the cheapest compact car at a car rental agency. 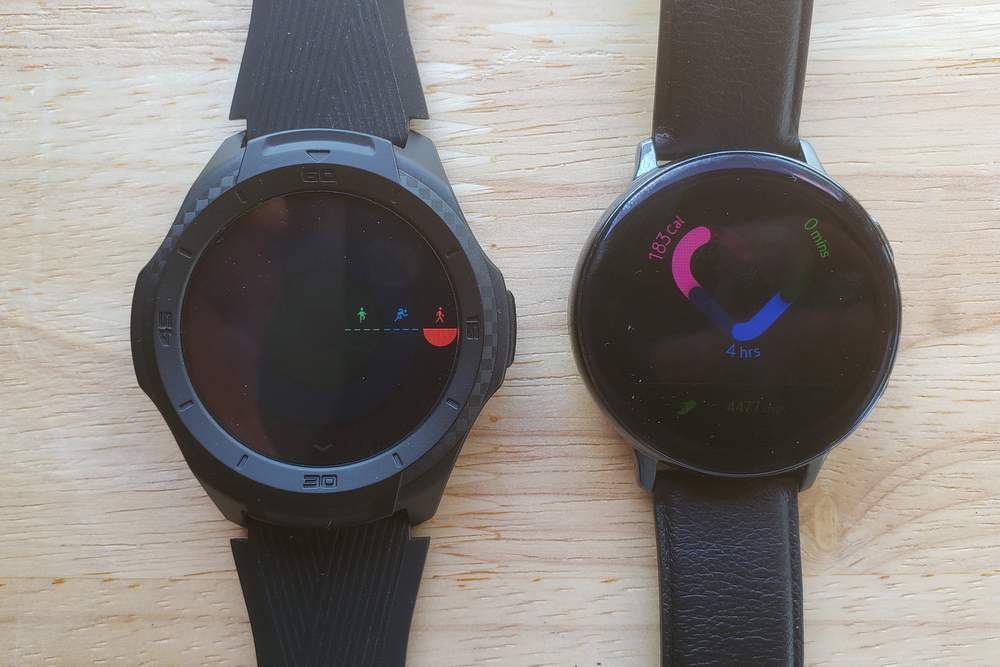 Samsung has a big advantage here because the Galaxy Watch/Active 2 integrate fantastically with the Samsung Health smartphone app.

Samsung Health is a great all-round lifestyle app that tracks your sleep, exercise and nutrition. There are also programs to help you keep fit.

Contrast this with what the Ticwatch S2 offers — a choice between Google Fit or TicHealth/TicPulse/TicExercise. These apps only scratch the surface relative to the Samsung suite. They don’t track sleep, nutrition nor have any workout programs that you can participate in.

You can’t go wrong with the Ticwatch S2 because it employs the Wear OS — a very dynamic and nimble OS.

You can, however, go wrong with the Samsung Galaxy Watch/Active 2. If you aren’t using a Samsung smartphone, then it really doesn’t make sense to buy a Samsung smartwatch when you can get better value and better features with a Wear OS smartwatch.

In this regard, the Ticwatch S2 offers great value, great features and decent features. But Samsung has its strengths in design, integration with Samsung phones and the excellent Samsung Health.