Early in the competition, the Samsung Galaxy Watch/Active 2 come out ahead. The Ticwatch Pro is very good but just needs a little bit more of oomph. 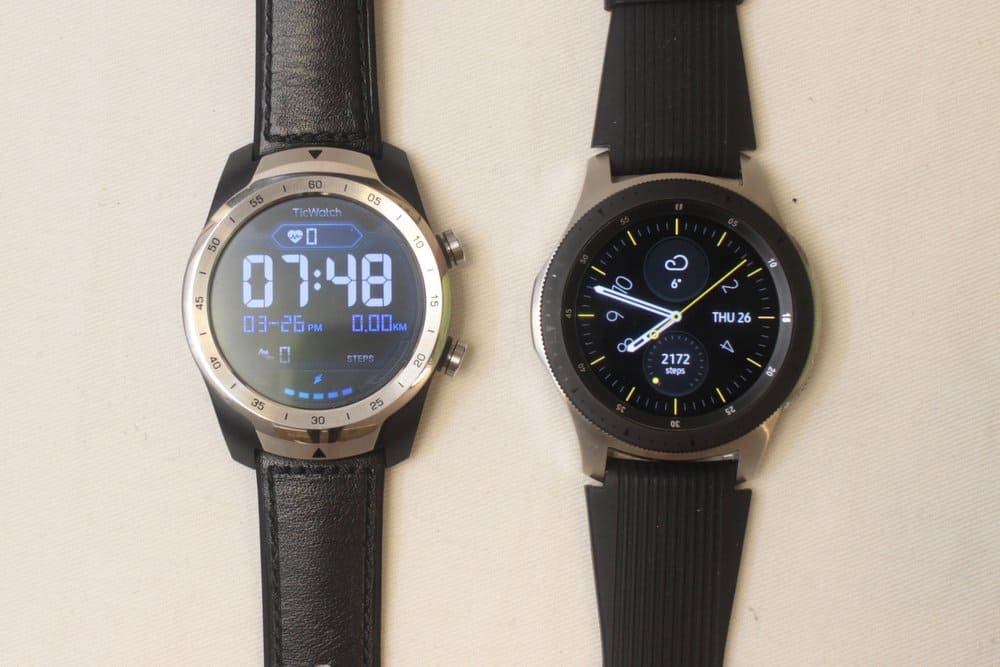 If you haven’t read it already, make sure to read the Galaxy Watch vs Fossil Gen 5 Carlyle review. That is the fairest test between two equally spec’d watches where the major difference is operating system (OS).

To reiterate, any other Wear OS watch is a step down from the Fossil Gen 5 Carlyle. The Ticwatch Pro is no exception.

That’s not to say that the Ticwatch Pro is an inferior watch. It holds its own because it is a large-size, fully-featured smartwatch that comes at a very competitive price. It also has a feature that no other smartwatch has. 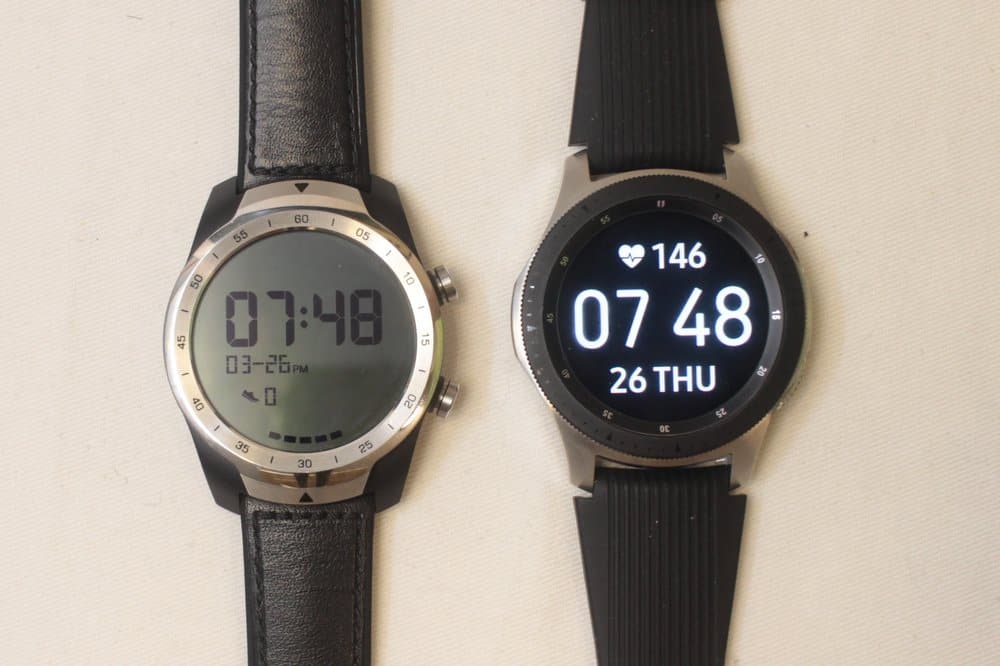 The Ticwatch Pro has two screens, layered on top of each other. It functions like a regular watch with a full-colour AMOLED screen, but once it goes into always-on screen mode, it will shut off the power-draining AMOLED screen and activate its power-sipping LCD that tells you the time, date, steps taken and battery left.

This contrasts with the Samsung Galaxy Watch/Active 2 which turns down the brightness of the screen and reduces some animations. This is typical of most watches.

Mobvoi, the manufacturers of the Ticwatch Pro, say that you can expect two to 30 days of battery life with the watch. In practice, I have found that two days of use is the max it’ll go. That said, during these two days, I used the watch quite heavily. Plus, the watch comes with significant bloatware which Ticwatch also warns will affect battery life until all updates are done.

If you need more battery life, you can always go into Essential Mode, which cuts off the link between your smartphone and your Ticwatch Pro. The Ticwatch Pro will only use its LCD screen in this mode but will continue to monitor heart rate.

The Samsung Galaxy Watch/Active 2 are also able to last two days in my tests.

I am confident that the Ticwatch Pro will outlast the Galaxy Watch in battery life as it has much more latitude in terms of power conservation. I’m surprised to be saying this, but if you are like me and charge your smart devices daily, then both watches will perform well even if you forget to charge it one night.

Unfortunately for the Ticwatch Pro, it has a four-year old processor, the Snapdragon Wear 2100, and it really leads to some bang-head-on-wall moments.

Wear OS watches have traditionally been criticized for being laggards in both performance and the Ticwatch Pro exemplifies this weakness like no other watch — even the super-budget Fossil Sport performs better.

I am going to hazard a guess that the reason why the Ticwatch Pro performs so sluggishly is because of its bloatware (as well as old processor) which helps you track health data.

Oddly enough, a search online with the keywords “Ticwatch Pro slow” has led to people suggesting on Mobvoi’s forums that disabling the Ticwatch suite of apps can really help, as well as reducing animations. Unfortunately, this requires you to tinker under the Wear OS hood.

The Samsung Galaxy Watch performs reliably with no lag or stuttering. It performs at par with all flagship watches with any pause being reasonably brief.

The biggest difference between the two watches is its OS. Both work fantastically with any Android phone, with the Samsung working especially well with smartphones of its own brand.

If you are using an iPhone, then you will have to give up some conveniences like being able to reply to notifications (email, messages, etc.). The best smartwatch for iPhone users is the Apple Watch bar none. 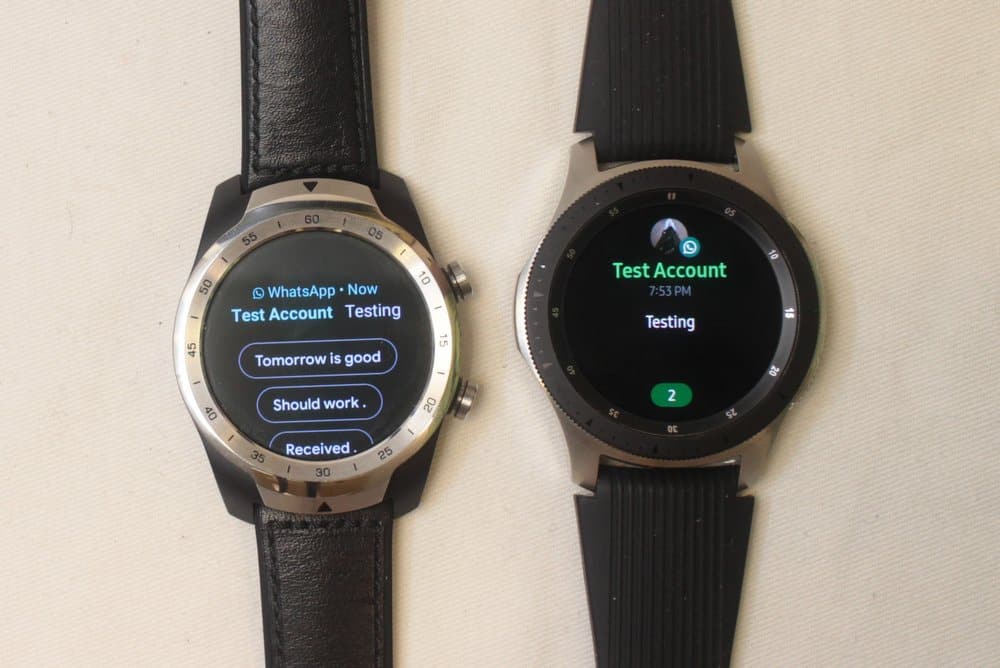 Samsung smartphone users will benefit the greatest from the seamless integration with each other. Not only can you access your emails and messages as you would on your smartphone, you can control your music much easier than you can with the Wear OS. 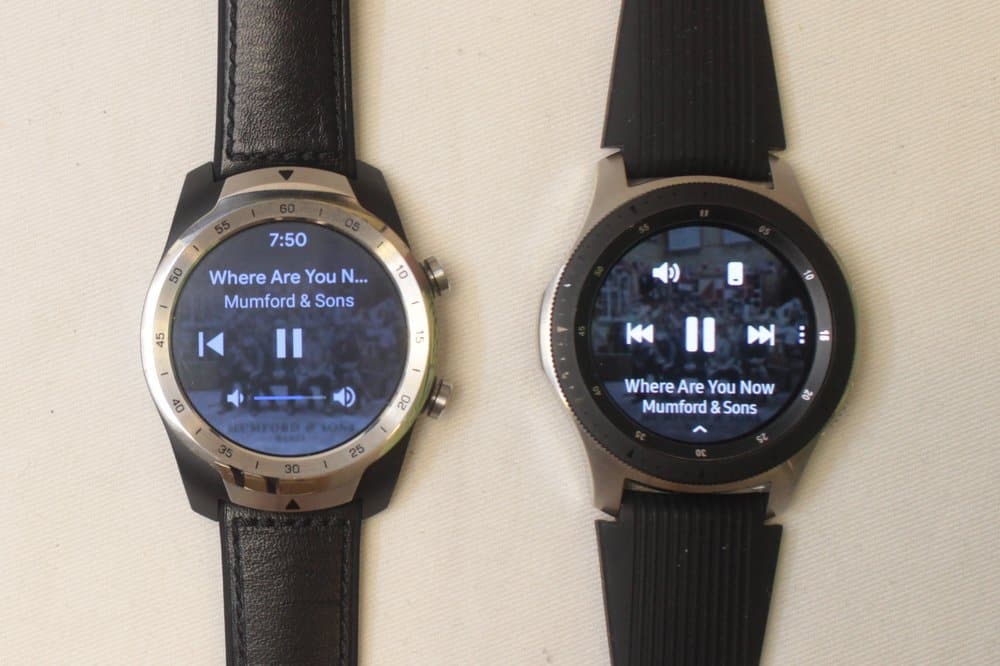 The Music app on Samsung smartwatches is superior to the Wear OS because you can control many more things. You can see what’s upcoming on your playlist, switch music players (Apple Music, Google Play Music, Spotify, etc.) and control the volume.

Contrast this to the Wear OS’s music player where you cannot see what’s upcoming, nor can you change music players. You will have to do that on your phone.

Wear OS users can only interact with their messages and email via notifications unless you install an app that allows you to browse your messages/email. Once you clear it, it’s gone and you will have to view it on your phone.

If you decide to reply to the notification, then this is where the Wear OS shines again. Both systems have different ways to reply including using the speech-to-text transcriber, a keyboard or a ready-made reply.

Two major differences here: the keyboard on Samsung watches is a T9 keyboard where you would form words by entering letters on a number pad, similar to regular phones of the 2000s. The Wear OS gives you a full keyboard, which in my opinion, is much easier to use because you can swipe your finger around the screen to form words.

The speech-to-text system on the Wear OS is also superior because it’s backed by Google’s experience in this area. Compared to Samsung, the transcribing is much more accurate and more reliable. Samsung’s transcribing can be rather annoying sometimes when it can’t differentiate between “for” and “four.” 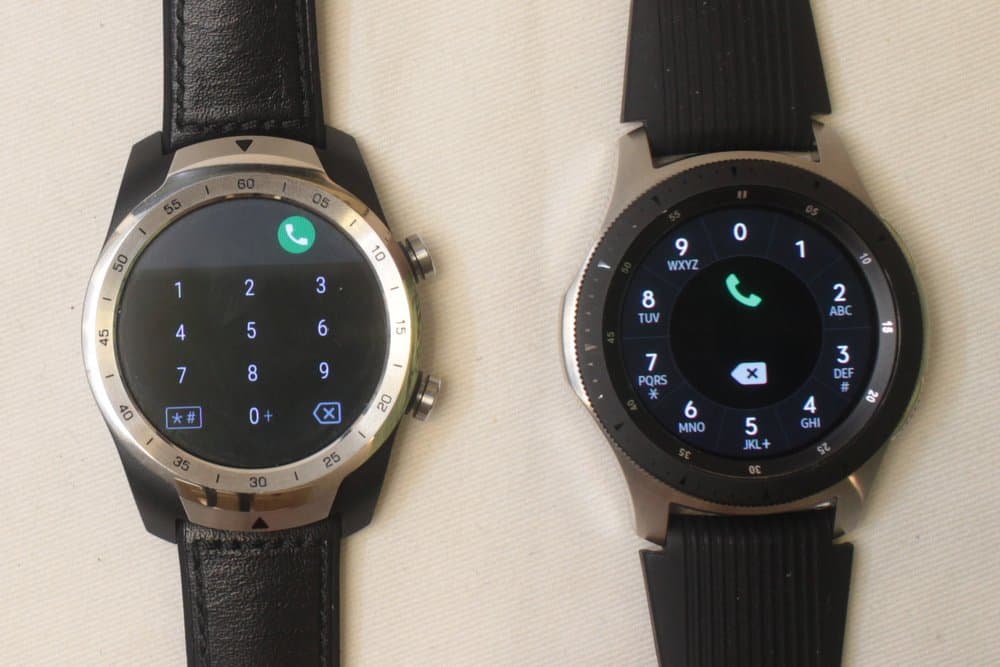 Both watches are able to make calls and accept calls on your wrist, so that’s great. I enjoy the convenience of being able to chat on my wrist (as much as that raises some eyebrows).

As highlighted above, Google is much better than Samsung in its speech-to-text functions. 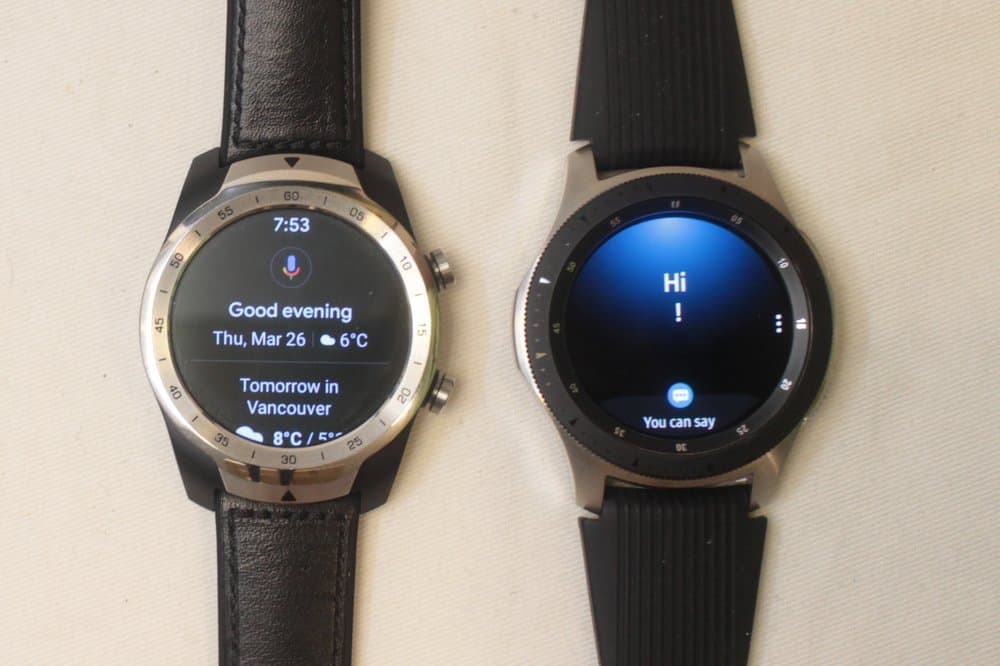 Google Assistant is also much better at handling tasks. It can do the basics that Bixby can do such as schedule appointments and calculate figures.

Where it leaves Bixby in the dust is when you ask Bixby to search for information or navigate you to a place. Bixby can’t do that but Google Assistant can. 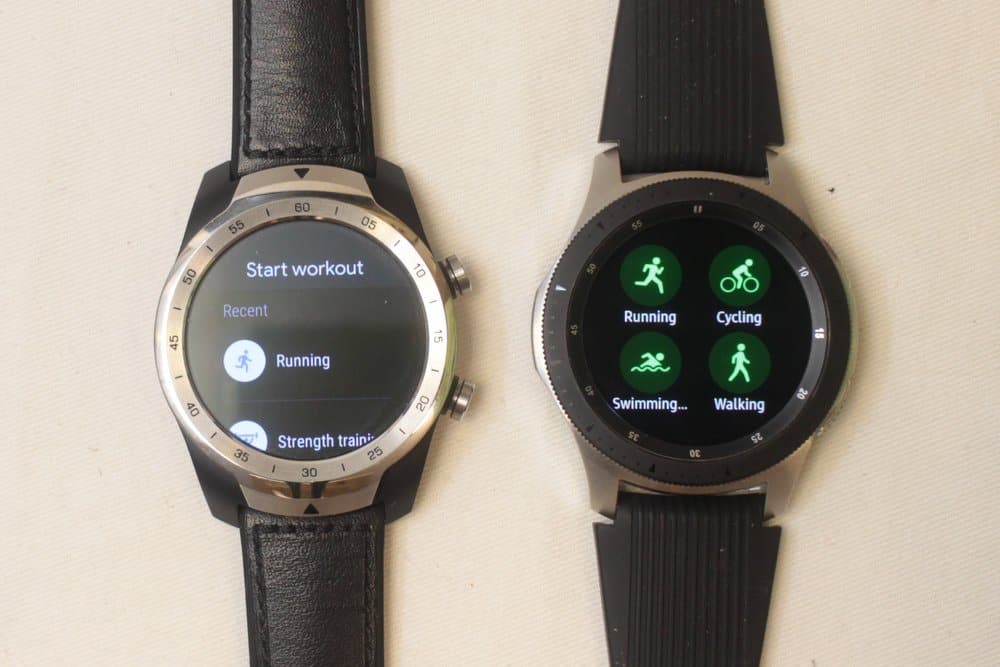 Samsung and the Ticwatch offer you a good range of exercises that you can track. Samsung has about 40 exercises, while Google Fit has about 50. The basics of running, swimming and bicycling are all included in both systems.

Samsung Health is definitely a more comprehensive wellness app than Google Fit. It can help you keep track of your caffeine intake, count calories and track your sleep.

The Ticwatch Pro, with Mobvoi’s software, can track your sleep but you will have to download a separate app. The pre-installed Mobvoi software does track your steps which keeps it one step ahead of most Wear OS watches. 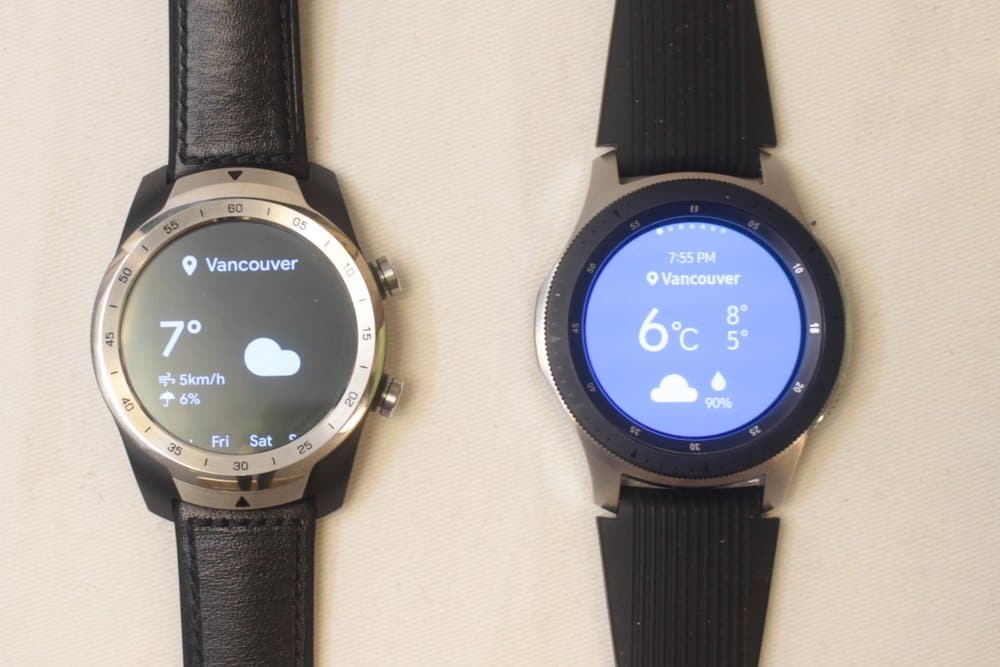 The Samsung Galaxy Watch/Active 2 are far superior watches as compared to the Ticwatch Pro, but that’s because they compete in different leagues of pricing.

Nonetheless, if you can afford the Galaxy Watch/Active 2 and you use a Samsung smartphone, then you will really reap the benefits of buying those watches. If you use a regular Android, you can also go far with the two Galaxy Watches.

The Ticwatch’s sluggish performance is really tough to get used to. It has a great OS, great functionality and great price, but it really is just intolerable in terms of how slow it is.