Bikinis are swimwear that you can flaunt during summer. Body types don't matter when wearing one. Here are the types of bikinis you can choose to wear to feel sexy and confident.

Bikini bathing suits have been in existence for hundreds if not thousands of years, with their first examples showing in early Roman and Greek art. Today’s Venus loves her bikini bathing suit as well and has many different types of bikinis to choose from.

When you are choosing a bikini, it doesn’t matter what kind of figure you have to put in it. It only matters that you feel wonderful.  Learn more about the types of bikini bathing suits here.

Simply put, a bikini bathing suit is a two-piece swimsuit that can take on many forms and pieces.

Although bikinis or two-piece swimsuits have been around for a long time, bikinis as swimwear did not get that name until the 1960s when designer Rudi Gernreich used the term monokini for a swimsuit. The bi-kini, with “bi” referring to the Latin word for “two”, was born.

A bikini can be full coverage, minimal coverage, or a number of combinations in between. Today’s bikini bathing suit can be defined by you, with as little or as much coverage as you need, in a wide range of cuts and styles.

The most common bikini is a triangle cut for the top, and a simple bikini cut on the bottom cut brief-style. Bikinis with tanks or boyshorts are also very common today. The styles can vary significantly on the top with strapless, spaghetti straps, and more.

The History of the Bikini 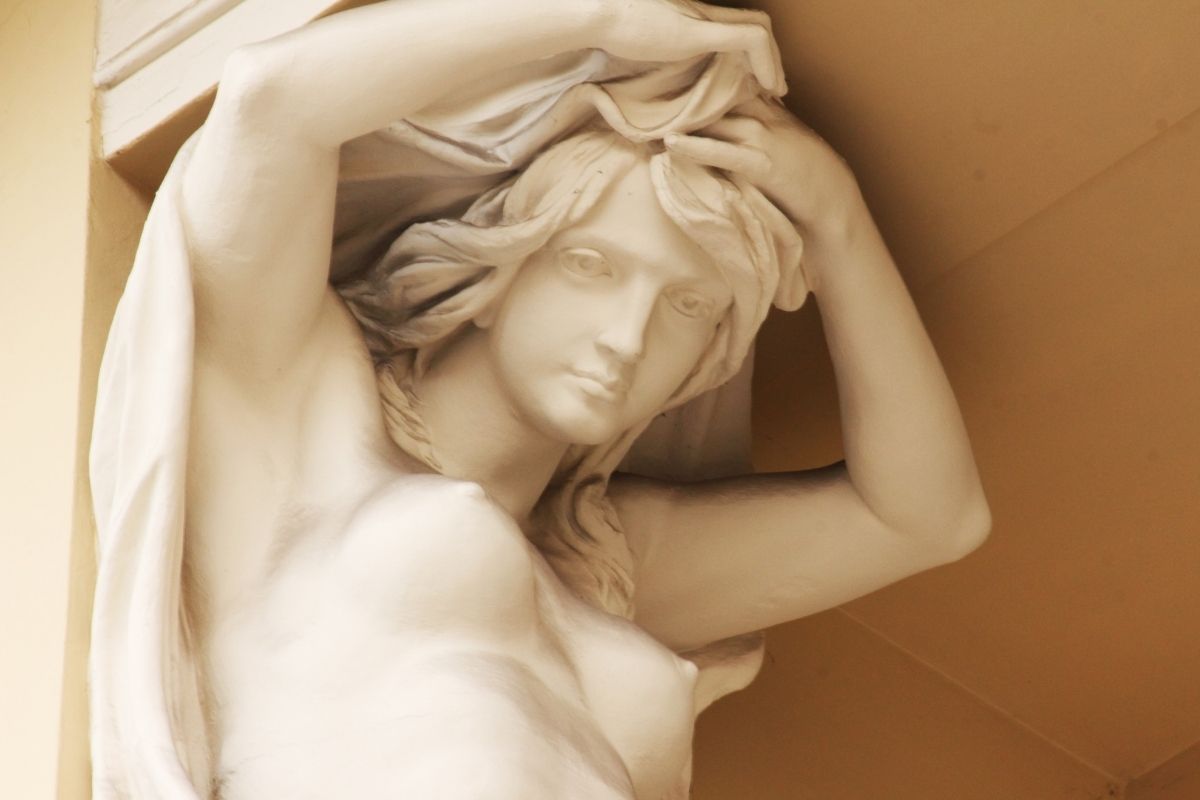 The history of two-piece wear has been said to go back to the Ancient Romans when Venus in a two-piece outfit was worn in the House of Julia Felix in art form.

Here the iconic look of Aphrodite was born, and it is a mindset that continues today with the two-piece bathing suit we now call a bikini. It was also seen in 5600 B.C. when a mother goddess known as Catalhovuk was shown in art wearing a two-piece outfit with two leopards.

The two-piece outfit was also used for athletic and swimwear in 1400 B.C. with something called a breastband. This would later be used as underwear. At the time, men were wearing briefs and, in some cases, loincloths, while women and athletes continued to wear two-piece outfits.

Fast forward to 1935, actress Jane Wyman would be seen in California in a bikini bathing suit, and Esther Williams would be in Yank, the Army Weekly in one ten years later.

In 1946, bikinis made a big splash in a post-World War II era when the material was rationed and two-piece bathing suits were a reasonable choice.

By the 1960s, the term bikini would be coined, and they would become staples on retail shelves and in designer collections as they still are today. The bikini is now a multi-billion dollar business with many styles to choose from.

There are many different types of bikini bathing suits, and they are all typically referred to by their type according to their cut. 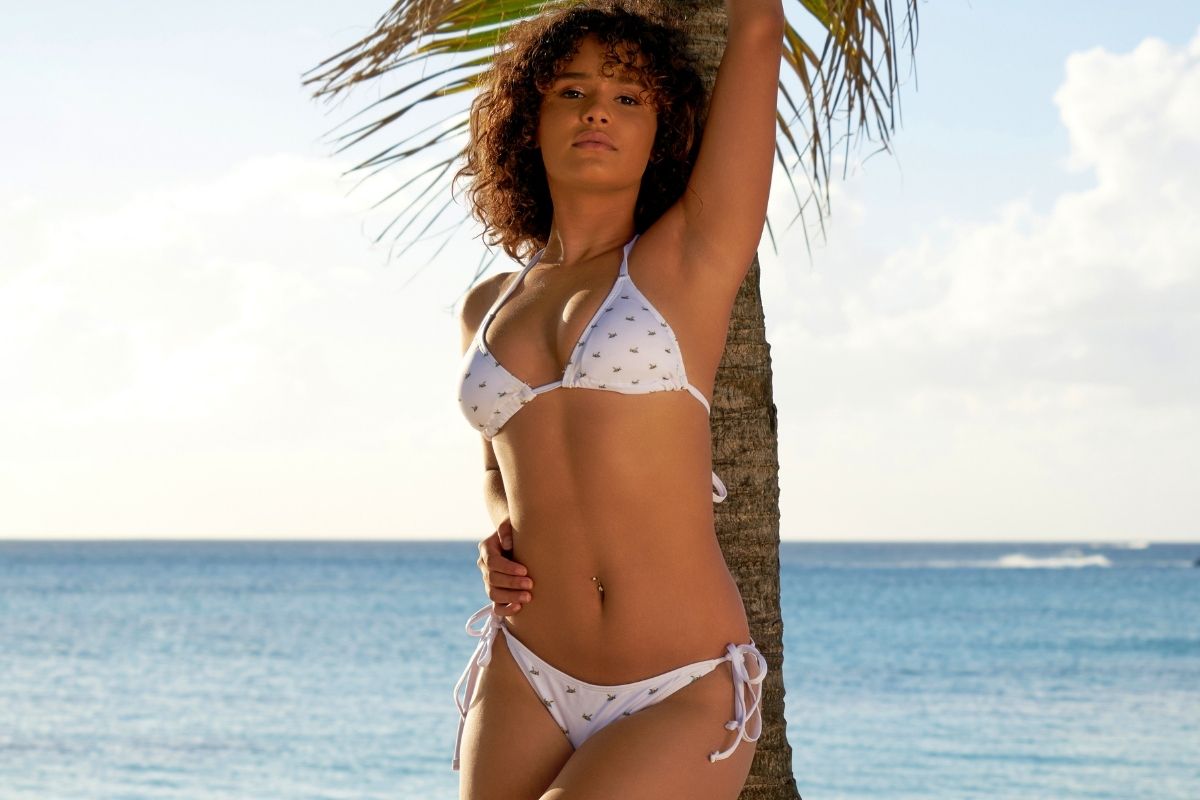 The string bikini is likely the most popular kind of bikini and is considered among the skimpiest bikinis. It is a revealing bikini that is tied together with strings for fastening.

The top is a triangle shape that ties around the back and the neck, while the bottom is a brief format with strings on the hip.

It has been said that the first string bikini was seen on Rose de Primallio, a Brazilian model who created her own two-piece bathing suit for one of her shoots.

In 1974, string bikinis were famous in Louisiana in the French Quarter for the opening of a new mall. Today, they are one of the most popular forms of bikini bathing suits.

The microkini is precisely what it sounds like, with very little to talk about. This design is enough bikini to cover the most important parts, and that is about it. There are sometimes straps on this design that can help to keep the bathing suit in place.

Otherwise, there isn’t much to this one. The term comes from an online community in the 1990s where bikini enthusiasts coined the term for what is probably the skimpiest bikini type on the planet.

Many places do not allow the wearing of a microkini, but locations you can enjoy them in are sometimes seen in Europe. 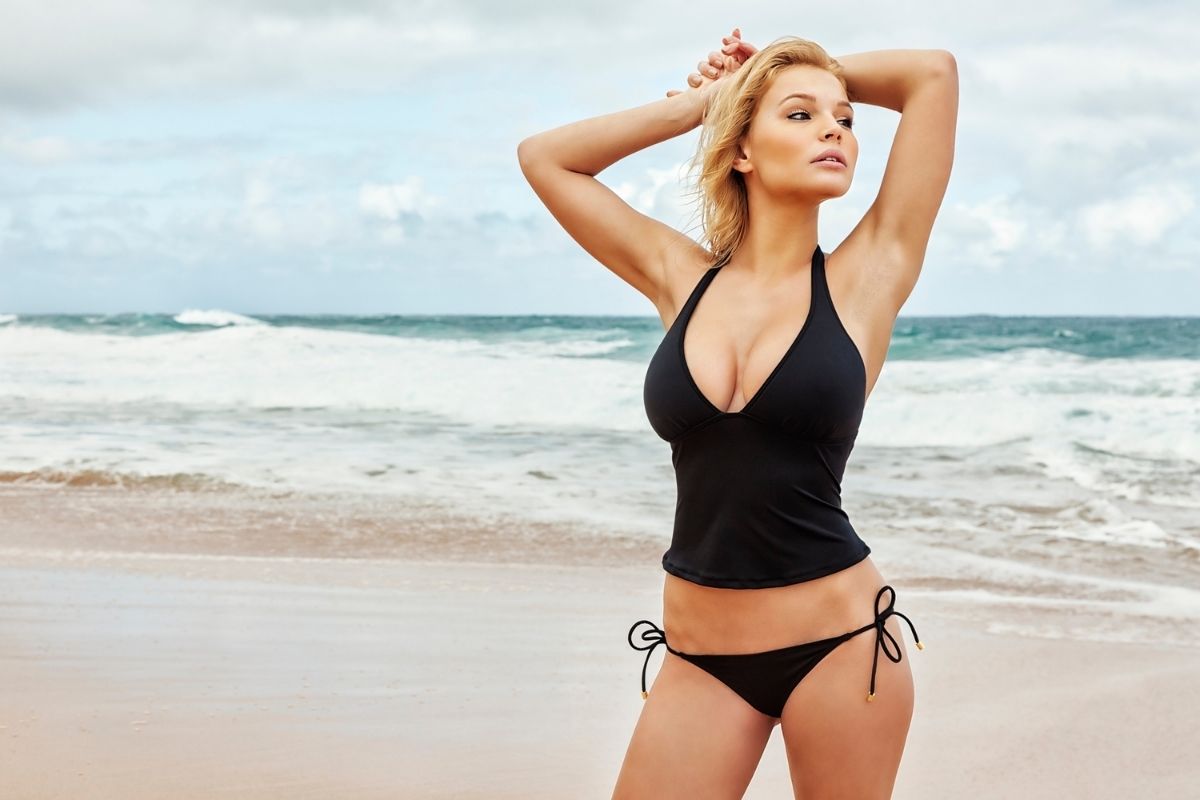 The tankini is a two-piece bathing suit where the top is a tank top-style top and the bottom is a variation. The bottom of this bathing suit can be boy shorts, brief style, or any kind of bikini bottom.

The tank top in the tankini isn’t always about a traditional style of tank top. The tank tops can be spaghetti straps, strapless, or a full bodies tank tops with wide shoulder straps.

This bikini has been a favorite since the 1990s and has been enjoyed by women because it offers more coverage than other kinds of bikinis.

The tankini is almost like a one-piece bathing suit in terms of coverage, with some midriff showing in this bathing suit. It is often cut to just above the navel, or to sit on the hips.

Designer Anne Cole is said to be among the first to design this piece and many variations have resulted from this initial trend.

The trikini was a bikini that first came into designs in 1967 when the handkerchief bikini was designed. It was designed with triangles on top, and one triangle on the bottom. The top itself, however, was designed into two different components, giving the “trikini” its name.

It was Brazilian designer Amir Slama who referred to this bikini as the trikini. It is a marriage of the no-string bikini and the strapless bikini.

This is a thing, although not the most popular bikini on the market today. Again, it is exactly what it sounds like. This is a bikini that sticks on, with no straps.

The bikini here was innovated from the Black Tape Project which places pieces of tape or sticky material on the most important areas of the body that need to be covered.

There is a motivation here, and that is, no tan lines. No strings, no hooks, no ties, just a sticky situation. Adhesives in bikinis can be ordered from a variety of brands today. 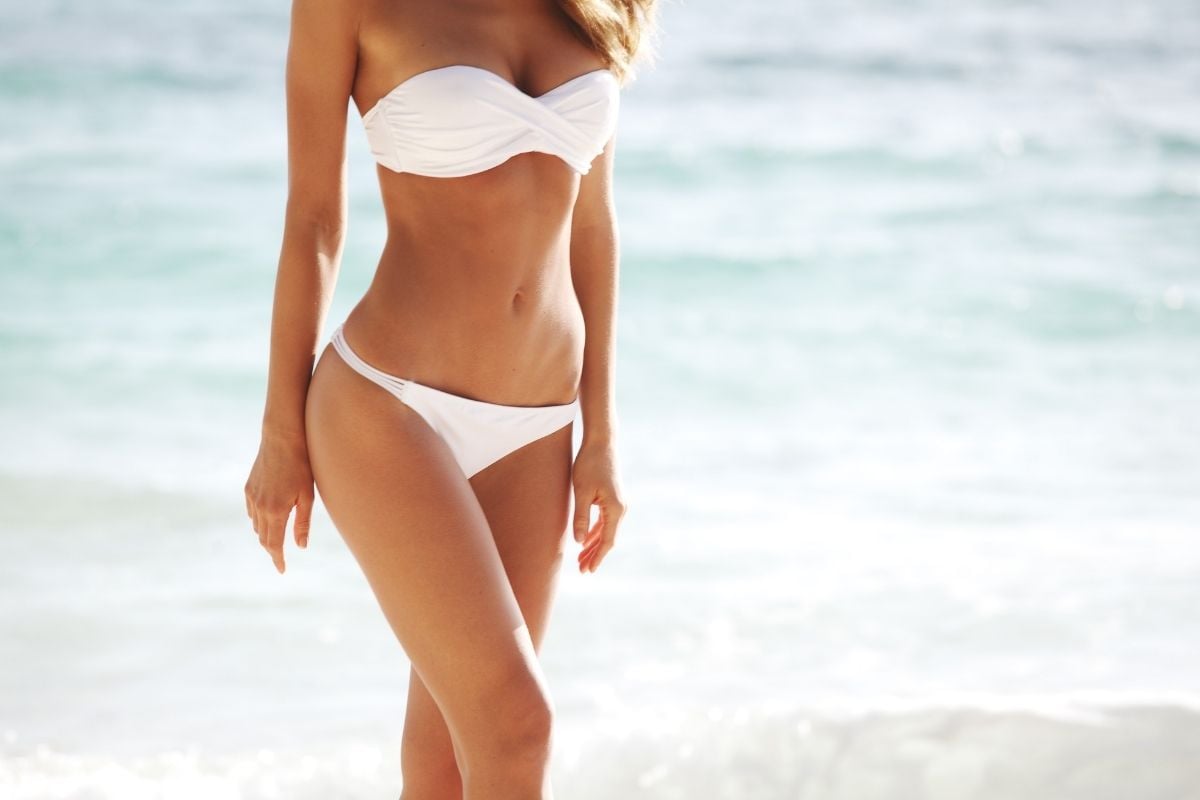 The bandeaukini is a bikini where the top is a bandeau or strapless bra, and the briefs are the wearer’s choice. This is a bandeau typically made of elastic and has no straps on the top.

These are comfortable bikinis for athletes and also for people that don’t want to fuss with ties and straps coming loose on their bikini.

In some cases, the bandeau can be fastened with hooks or snaps. It can also be a one-piece without hooks or snaps and pulled on over the head. This is a kind of tube top bikini as well.

In these designs, the skirtini has a built-in brief or shorts underneath so the wearer can still feel comfortable and pretty at the same time. This design is popular as it offers coverage with style and has been made popular by brands such as Juicy Couture. 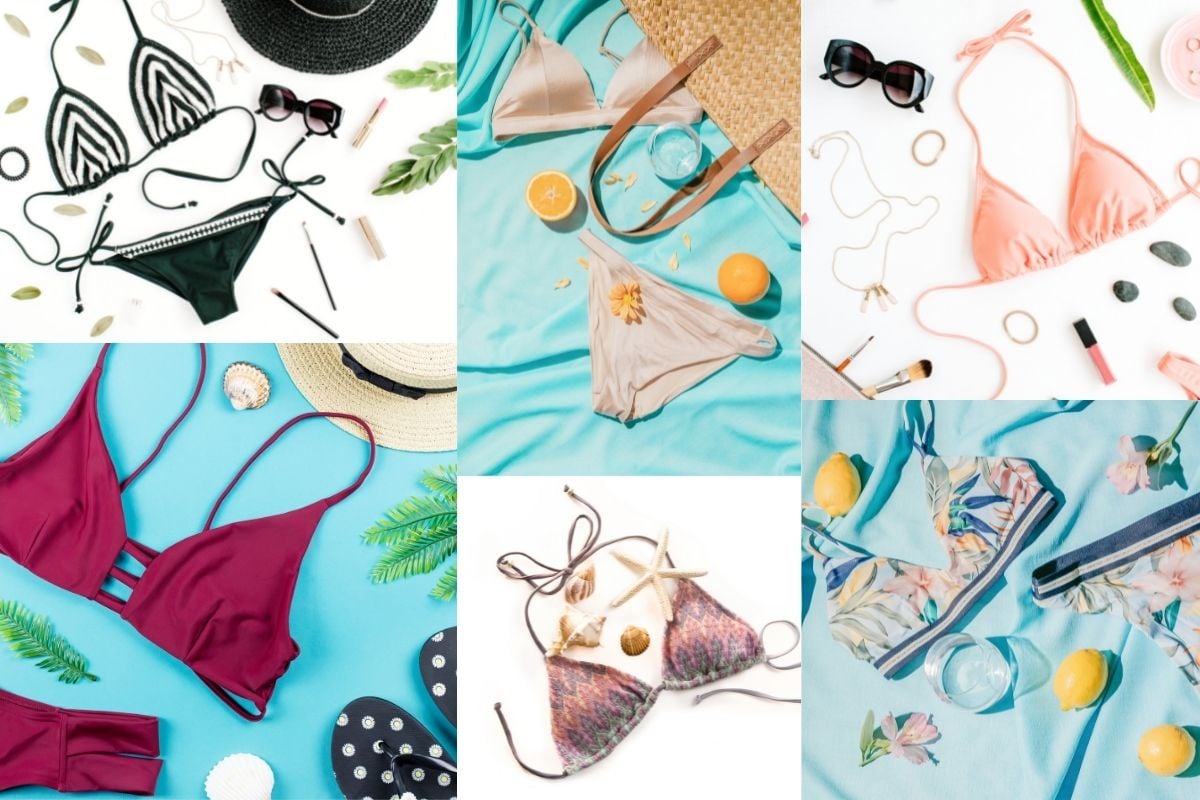 The bikini is always going to be a popular trend in fashion, and will always experience their own path of evolution. It’s not just a tank and a pair of briefs in spandex anymore. Innovations in the world of bikini follow the trends in innovation in the world.

Trends in bikini fabric include a 3D printed bikini that is both water-resistant and easy to wear in the sun. Solar bikinis were invented by Andrew Schneider in 2011, where they were covered by over 40 solar cells that used a USB port plugged into an iPod to work.

Maybe not the most swim-friendly suit, but it is innovation all the same.

In the early 2000’s, one company used titanium nanoparticles in nylon to create a new kind of sun-proof bikini. In 2008, a French designer used game controls in the bikini, because, priorities.

Still, an innovation such as this is unique enough to create a market for it.

Other bikini innovations include UV indicators on some materials. Here, photochromatic elements are woven into the fabrics in order to provide UV indicators through LED notifications.

The Materials Used for Bikinis

If there is a material to be used for making garments, it has been used to design bikinis.
Bikinis are a spectacular fashion statement, but they are not easy garments to make.

They need a special material that is waterproof, sunproof, and can also be beautiful. There are a number of kinds of materials used for bikinis, and many more are being developed today.

At first, cotton was used for the bathing suit, but now, more waterproof fabrics have been developed to make bikinis practical and wearable in almost any element.

Fashion designers today are looking for waterproof material that does not pinch or wrinkle, can stretch, and be worn in any kind of water.

The most common materials used in bathing suits are:

Other materials such as eco-friendly material and waterproof hemp have also been used.

Cotton is an easy choice to use for bikini bathing suits because it is easy to work with, affordable in the mass market, and it is easy to wear. Bikinis are not the most comfortable thing to wear, and they can be worn comfortably for longer periods of time.

Cotton and jersey are the most common materials to make cotton bikinis from, although cotton-poly blends are also popular. The fabric here is treated, baked to form the shape, and then inserted with cotton gussets for interior protection.

Nylon and spandex are other popular bikini bathing suit materials, and they will wear well in the water. They will also wear well in the sun all day or at an all-day beach party or outdoor event.

Lycra is a combination of these materials and a very popular swimwear fabric. This allowed bikini makers to create designs that wouldn’t sag or feel droopy like some of the bikinis from days gone by.

Spandex continues to be a popular choice for bikini materials. Like cotton, it can be used in the mass market, due to its affordability and flexibility. However, it does not bear well in chlorine for extended seasons.

A spandex bathing suit may last only one or two seasons, or a few months with heavy use in a non-seasonal climate before the chlorine breaks down the spandex and the suit begins to droop.

Other Materials Used in Swimsuits

Bikinis have been made from a wide range of fabrics, including eco-friendly fabric such as paper. One designer in the UK has also made a bikini out of mink fur. Another in Rio de Janeiro used metal to design a bandeau-style bikini.

Rubber and neoprene have also been used to create bikinis, as have eco-friendly materials such as bamboo, organic cotton, and fishnet. Reusable nylon has been used, and Lady Gaga once wore a meat bikini that is still raved about today.

In some cases, the innovative materials used on bikinis are more about making bold statements and being innovative, and not about creating a practical product for the mass market.

Today, anything that can make a garment can and will be used for bikini bathing suits, and sometimes even it can not.