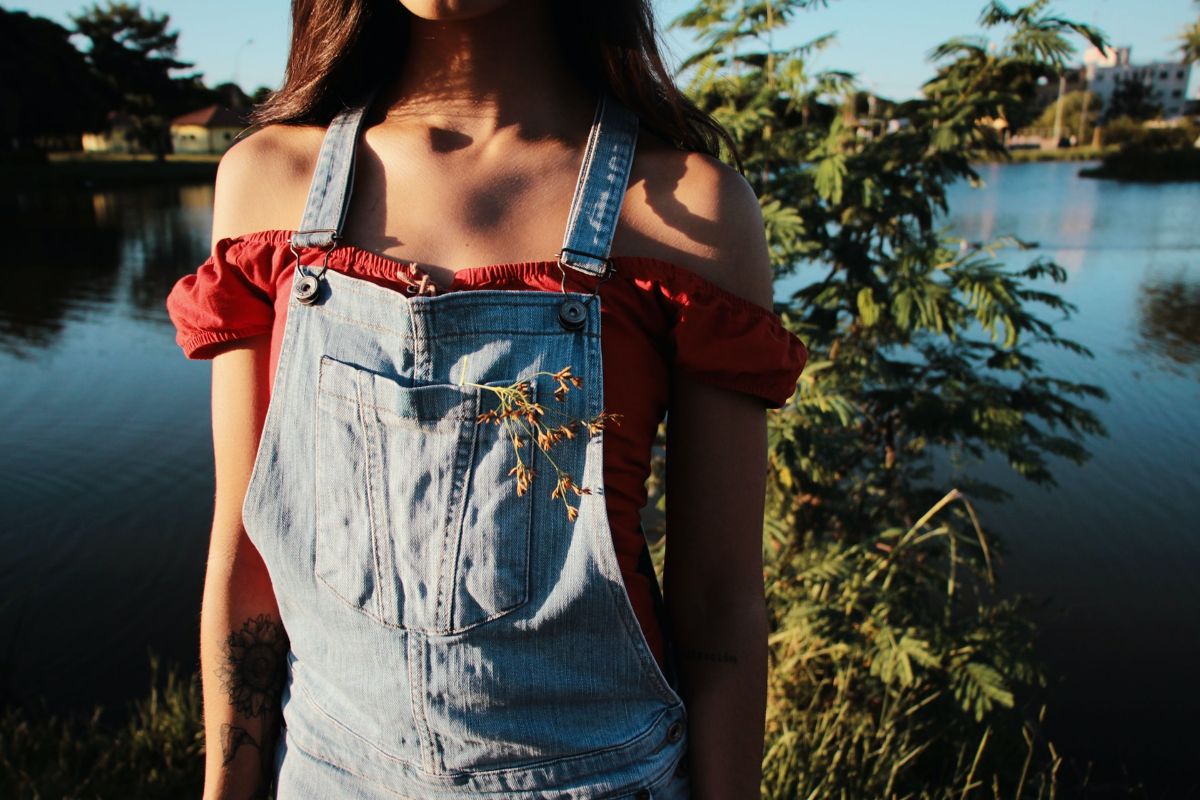 Overalls are one of those pieces of fashion that are just everywhere. It seems like every celebrity has worn them and you see them on TV shows and movies all the time. But when you really get down to it, there’s probably a lot you don’t know about overalls. For instance, do overalls have a zipper? Buttonhole? What’s up with overalls, anyway? Learn a little bit more about how overalls are made and where the little extras, like buttonholes and zippers, come from in the first place.

Buttons are one of those clothing details you probably never really think about. You may have never wondered where buttons came from or when they first appeared. It kind of seems like buttons have been around for ever. But until the 1200s, buttons were not widely used. They certainly weren’t used to fasten items of clothing on the body. Until the 1200s, clothing was laced together or fastened with brooches and various types of clasps to keep it in place around the body. This is why the Romans just wore togas tied around their bodies. Then, someone came up with buttonholes and everything in fashion changed. 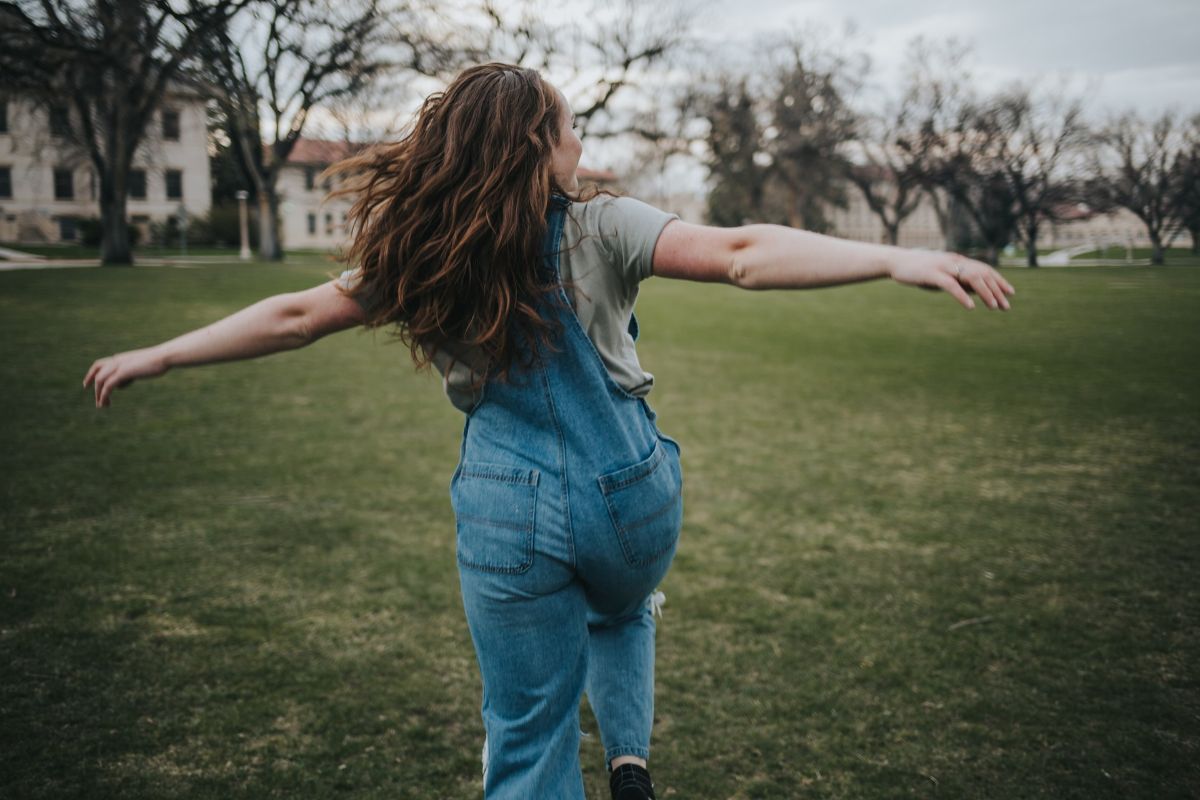 Buttons with buttonholes became incredibly popular right away. The first button makers guild was started in France in 1250, shortly after buttonholes were created. Soon, buttons were so highly prized that laws were passed to restrict their use in fashion!

The buttons allowed clothing to fit more closely around the body, conforming to the shape. This changed fashion by making new silhouettes and new clothing designs possible, opening brand-new style doors. Clothing began to take on much more stylized forms and distinct designs. Buttons made it all possible.

Buttons and clothing with buttonholes became incredibly popular, so much so that buttons appeared on clothing for the sake of decoration alone. They were seen on necklines, sleeves, all over clothing. Buttons made with gold, silver and ivory were used to indicate rank and status. Other buttons were made with copper, tortoiseshell and real jewels. However, most people wore buttons made with wood and bone.

By the 1700s, cast brass and pewter buttons appeared on the fashion scene, becoming particularly popular in military wear. Steel buttons followed and quickly appeared in all types of fashion. Delicate porcelain and glass buttons followed. In Japan, buttons with hand-painted images on ceramics appeared in fashion.

Because they are such old and important clothing embellishments, buttons have had plenty of time to be tweaked over the years. Buttons today are made in a huge array of designs with all kinds of different materials. There are many different designs out there but there are only a few main types of buttons that you will see in clothing frequently. 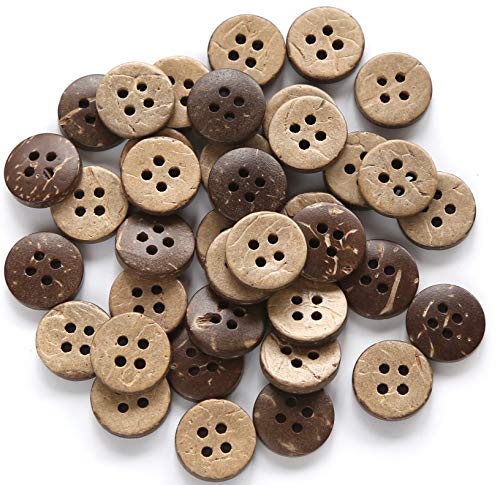 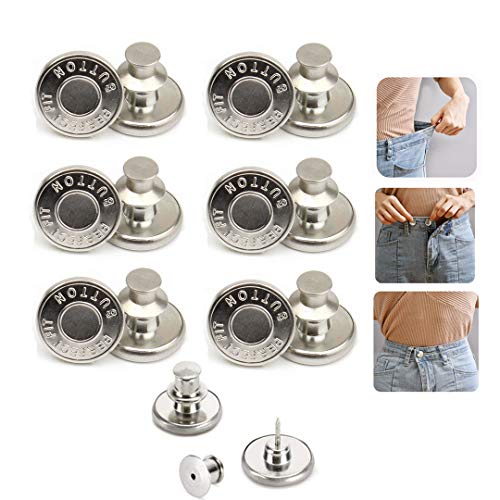 Usually made with metal, screw on buttons have two parts: the button and the stud. The button screws onto the stud through the fabric. You will find these buttons most often on tough clothing materials, such as leather. Buttons you find on blue jeans are often screw on button designs. 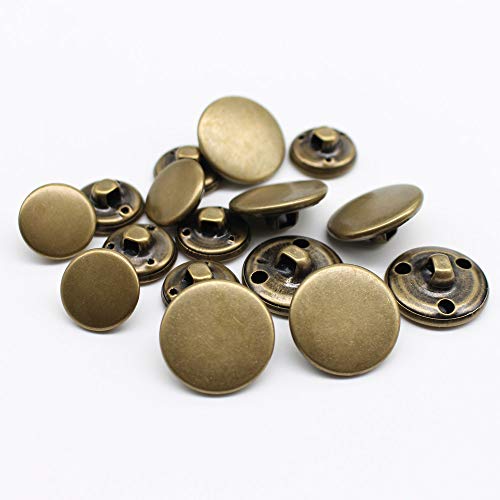 Shanked buttons have a highly recognizable shape that has a little base on the underside of it, with the button attached at the top. This little base is where the hole for the thread is located. Because of this unique shape, shanked buttons can only be sewn on by hand. They cannot be machine-sewed onto clothing. Shanked buttons have no holes on the face of the buttons, a look that some people prefer. This allows for very detailed, heavy embellishments and intricate designs. Many highly decorative buttons are shanked buttons.

Cloth buttons, which are metal, plastic or wood buttons covered with fabric, are often made in a shanked design as well.

The oldest buttons ever found date all the way to the Indus Valley Civilization, circa 2,000 B.C.E. These buttons, however, were used purely as decoration. They attached to clothing to embellish it. Buttons as fasteners were a much more modern concept that did not arrive until the medieval era. These ancient buttons were mostly made from shells and they were stitched onto garments. Buttons have been a mainstay of fashion for thousands of years and they are still interesting finds for archaeologists.

But clothing fastener technology has continued to evolve. Buttons were amazing in the Middle Ages and they allowed for fashion to take all sorts of new directions. But another game-changer was lurking on the horizon, ready to usher in fashion for the Industrial Age.

Who Came up with the Zipper?

The zipper is also called a slide fastener. Zippers are simple but truly ingenious devices, two strips of metal or plastic teeth that interlock and unlock when a sliding piece is moved up and down. 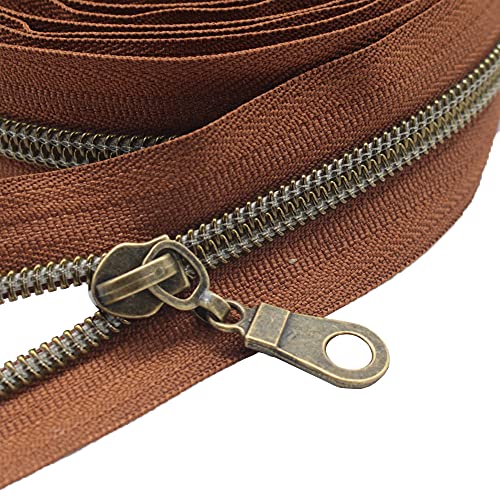 And when this thing debuted at the World’s Columbian Exposition of 1893 in Chicago, Illinois, people were utterly astounded. It was invented by Whitcomb L. Judson and called Judson’s fastener, also known as a clasp locker. His version was a little bit more rough than the modern zippers you’re used to but it was definitely the same technology.

A more streamlined version, called the Hookless #2, was created by a Swedish-born engineer living in the U.S., Gideon Sundback. The zipper he patented and marketed n the early 1910s is considered to be the first modern zipper. The teeth were smaller, the sliding motion was smoother and it was just easier to use.

Zippers appeared on clothing in the 1920s. B.F. Goodrich Company first used the name “zipper” for the slide fastener in 1923. But it wasn’t until the year 1937 that the zipper completely took fashion by storm and exerted its dominance over buttons.

In 1937, French fashion designers decided that the zipper, not buttons, was the superior method of closure for pants. Esquire dubbed the zipper the “newest tailoring idea for men” and raved about the zipper fly. Zippers were soon used for dresses, pants, jackets, even boots. They completely revolutionized design.

Now, clothing could be more form-fitting than ever. So the next time you zip something up, think about how once, everything was held together with buttons…and before that, you had to use laces!

What Does This Have to Do With Overalls?

So, overalls and zippers both have a pretty interesting history. But how much of that history is tied to overalls? What does it matter, anyway? Do overalls even use buttonholes or zippers or any of the above?

Overalls were never meant to be high fashion. In fact, they started out as strict military wear. Overalls were created for British soldiers, who needed an extra layer of protection to wear over their clothing while they took on dirty, tough tasks, such as digging trenches and mucking out stables. They were loose, baggy pieces of clothing, roughly made, constructed out of tough fabric that could stand up to hard work. They weren’t fashionable, they were practical.

Farmers in the U.S. noticed how useful overalls were and soon, the garment had spread around the world. Farmers everywhere were wearing them. Back then, overalls were known as “slops” because you wore them while doing the sloppiest tasks.

What About Overalls and Buttons?

In those days, overalls sometimes had buttons. They maybe had zippers sometimes, too. It’s hard to say because most people in those days made their own clothing or custom-ordered items from the local tailor. This was what happened to one Jacob Davis, of Nevada. An angry female customer came into his shop one day. She was mad because her husband, a miner, kept wearing out his work pants. She was sick of patching up his pants and told Davis, point-blank, that he simply had to make a tougher pair of pants. The ones he was selling just weren’t getting the job done.

He took her words to heart. Jacob Davis turned to a man he knew, the owner of the retail store where he purchased his fabric. Together, the two collaborated on a new work pants design. It was so incredibly successful that they decided to start making overalls, too. Together, the two started mass-producing work pants and work overalls to sell to American workers across many industries, including farming and mining.

That business partner that Davis worked with was a man named Levi Strauss and together, these two invented blue jeans. Maybe you’ve heard of them. Once they got their hands and their minds on overalls, the design of overalls became much more standard. 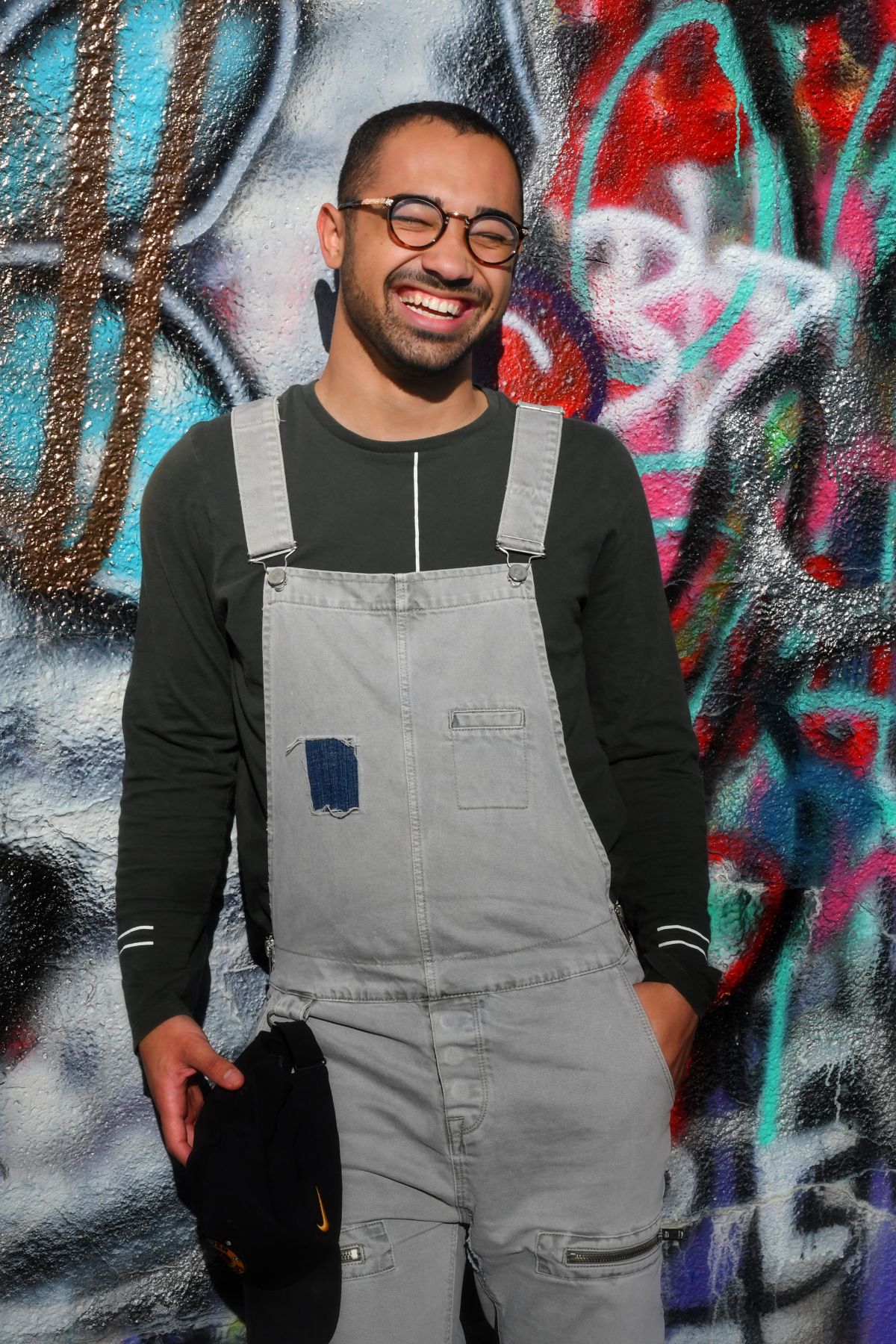 Overalls became a little less baggy, more streamlined and importantly, they got the bib pocket that made them so useful for holding small tools and assorted odds and ends. They also got their standard design, which would stick and continues to stick to this day, though overalls are now made in a huge variety of colors, materials and designs.

The basic design of overalls is very simple: it’s a pair of pants, loose-fitting around the legs and waist, with a chest bib that is secured to shoulder straps with buckles. The shoulder straps split into two sections to come down over the shoulders and meet in the back to attach to the back of the pants. The straps are adjustable.

And nowhere in that basic design will you find zippers or buttonholes…mostly. There is one big exception to this rule and in modern fashion overall designs, you will find many styles that have both zippers and buttonholes, or one or the other, that are used for the sake of style. But in the main and basic design of overalls, buttonholes and zippers aren’t a necessity. Only one long-time maker of overalls is known for including a buttonhole. But why did they do it? 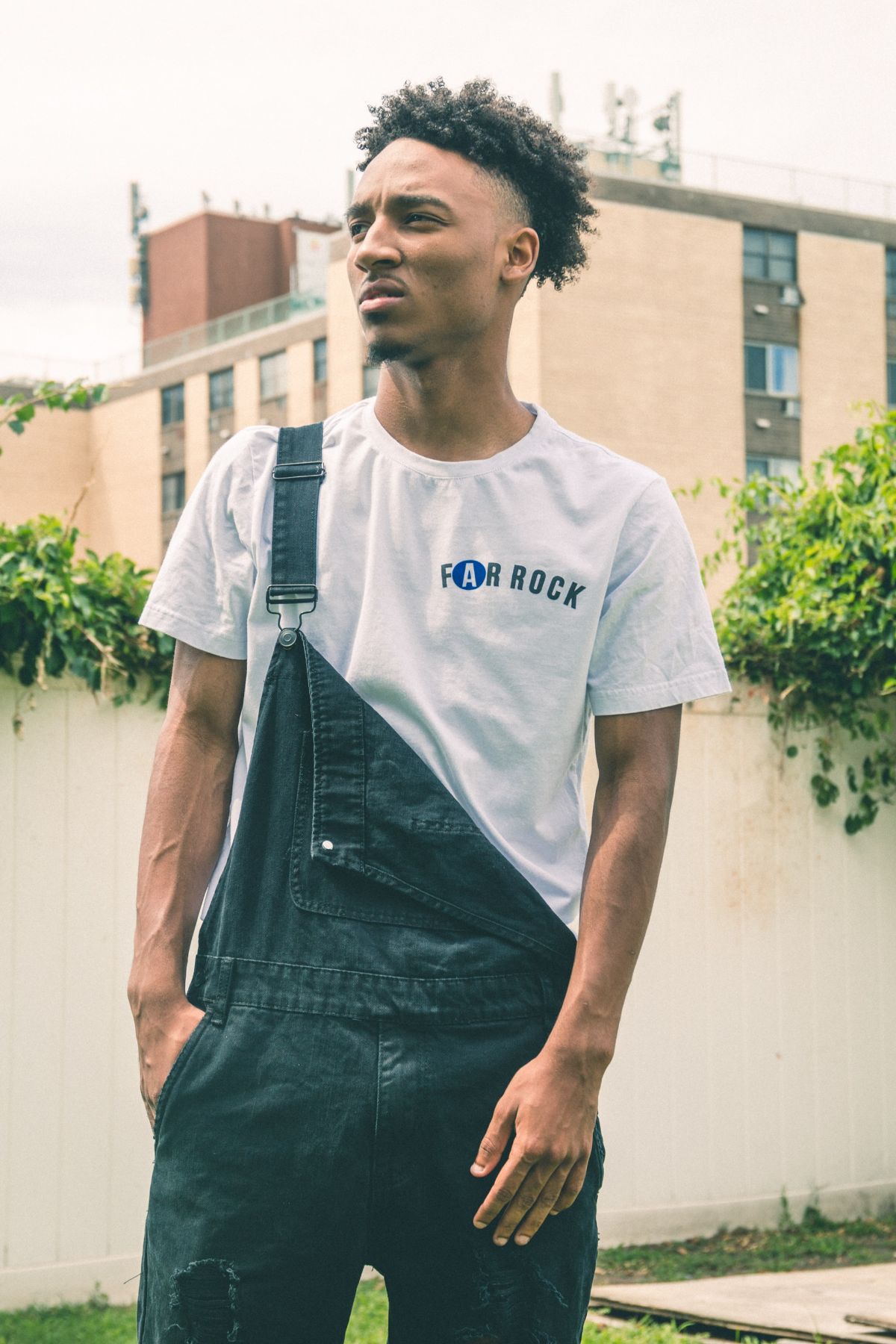 Overalls are designed to secure at the shoulders and in basic designs, they don’t need anything other than this to fit comfortably around your body. In standard overalls designs, the straps end with buckles at the end of each looped strap. The buckles are simple, flat pieces that slide over corresponding buttons on the bib of the overalls. Because of the way the buckles are made, buttonholes are not needed at all. The buttons slide right into the buckles and sit securely under you pull them apart.

Do Overalls Have a Zipper? Buttonhole?

In standard overalls designs, there are no buttonholes and there are no zippers. However, some designs are made with these embellishments and many others. Many overalls designs have buttons with buttonholes a the hips, which allows for a much closer fit. Some designs may be made to zip up in the back or on the sides to allow for a more form-fitting style. Buttons and zippers also appear in fashion all the time with no purpose other than looking cool. You will see many overalls styles with random buttons and zippers that are there just for embellishment, just like those ancient buttons made 5,000 years ago that were once meant only to decorate.

So do overalls have a zipper? How about buttonholes? Well…sometimes they do. Standard, classic overalls don’t need either buttonholes or zippers but in modern fashion overalls, you can find it all. It really just depends on the look you like. Overalls are available in any color, pattern, material or design you might want, so have fun and play around with overall style. You may find that it improves your over all fashion wardrobe.

King & Allen – The History of the Button

Smithsonian – The Up and Down History of the Zipper

WikiHow – How to Make Overalls