Skip to Content
The Ticwatch E2 is a great budget watch but lacks some premium features, so why is it that it's a good competitor to the premium Samsung Galaxy Watch3? 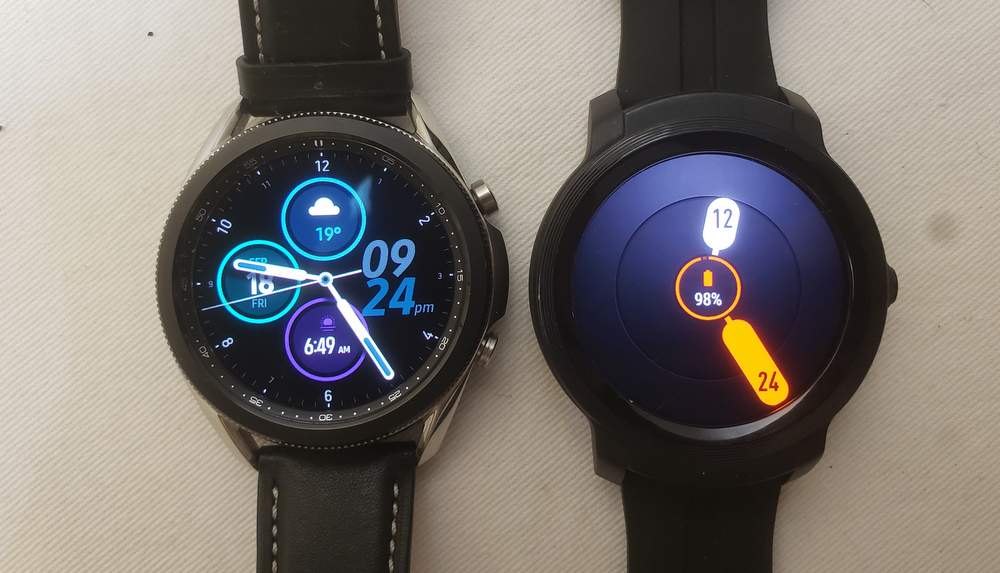 Feelings can lead us on a path that can sometimes be irrational.

The Samsung Galaxy Watch3 is just so much more “solid” in terms of its design. Like Perrier bottles made of glass versus the ones made of plastic. It’s heavier, shinier and more expensive.

The Ticwatch E2 feels the opposite. It’s very much plastic all around. It’s very lightweight. It’s a lot cheaper.

But beyond the external differences, the software can make a lot of difference and that’s not to be discounted. 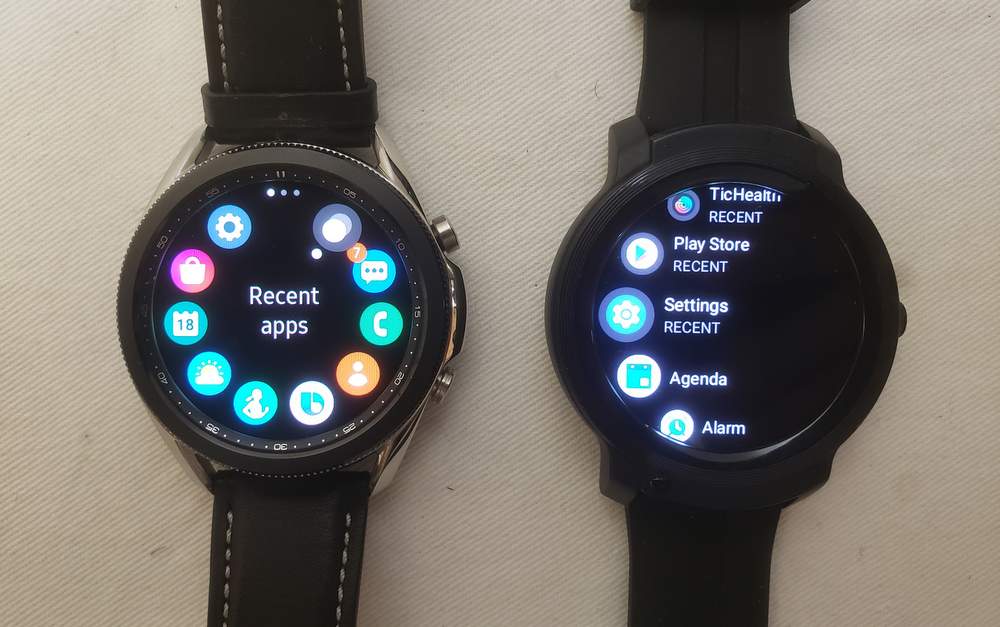 Smartwatches really don’t follow a linear path where the more you pay, the more you get. While you do get more features the more hundreds are in a smartwatch’s price tag, the features become less major like NFC, a speaker, automatic brightness, etc.

And one major reason is because the software is the same across all major smartwatch brands.

Mobvoi’s Ticwatch series all use the Wear OS.

Samsung’s Galaxy smartwatches all use the Tizen OS.

Apple Watches use the WatchOS.

So, comparing watches within platforms puts a lot of emphasis on the what’s external. However, since we’re talking about the Samsung Galaxy Watch3 and the Mobvoi Ticwatch E2, the software and operating system make a huge difference.

The Ticwatch E2 runs on Google’s Wear OS while the Samsung Galaxy Watch3 runs on the Tizen OS by Samsung.

The Wear OS is much more of a general purpose, “everyone’s welcome” kind of platform. It will pair with everything. It’s just best when paired to an Android smartphone.

So what are the major differences and why should you choose one over the other? 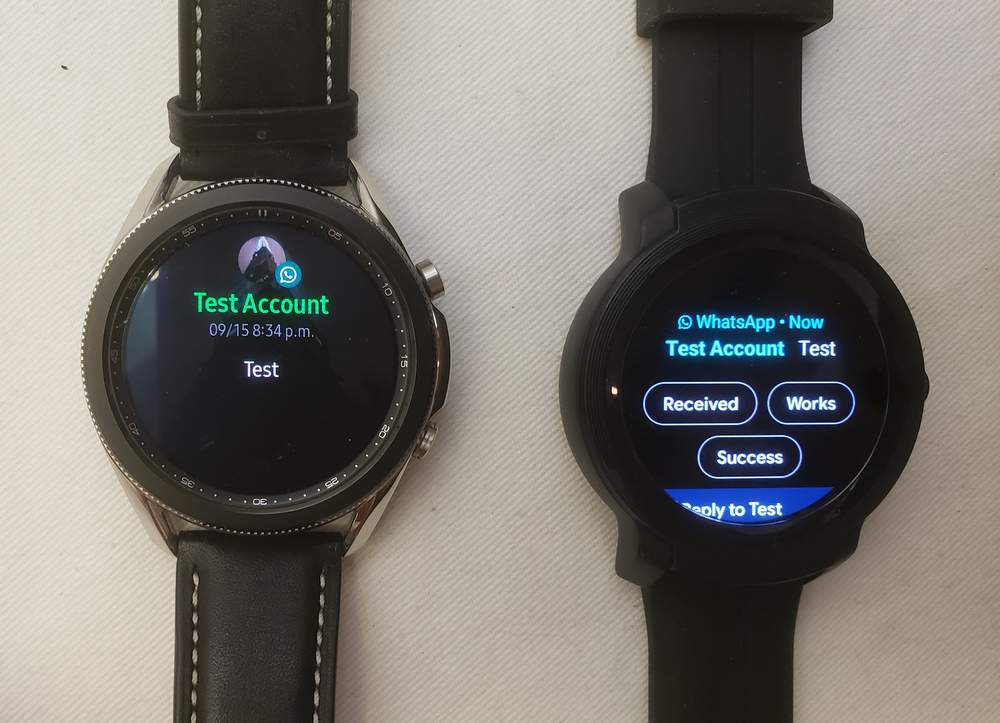 With the Samsung Galaxy Watch3, you can access your email and message logs directly. I haven’t found this to be very useful as it’s always faster just to access them through your phone. But it’s nice to have.

Otherwise, you will probably interact with your texts and emails when they come in as notifications.

When you receive them, you can reply using the pre-generated responses, by typing with an on-screen keyboard, using the handwriting function, or using the speech to text function.

The experience on the two platforms differ slightly because of the quality of the transcription. If you look at the above photo, you see the small difference. The Ticwatch E2, on the right, is the correct one.

I think the Wear OS is superior and that’s important. I almost never reply on my smartwatch through any other method because if I had to type or draw letters on a small screen, I’d rather avoid the frustration and use my smartphone instead.

So the better the speech to text function, the happier I am.

Google performs better than Samsung in this case, which means the Ticwatch E2 will lead to more successful message transcriptions than the Samsung Galaxy Watch3.

I find myself discarding messages on the Galaxy Watch3 more often than I do on the Ticwatch E2.

But a good speech to text function has deeper implications too. 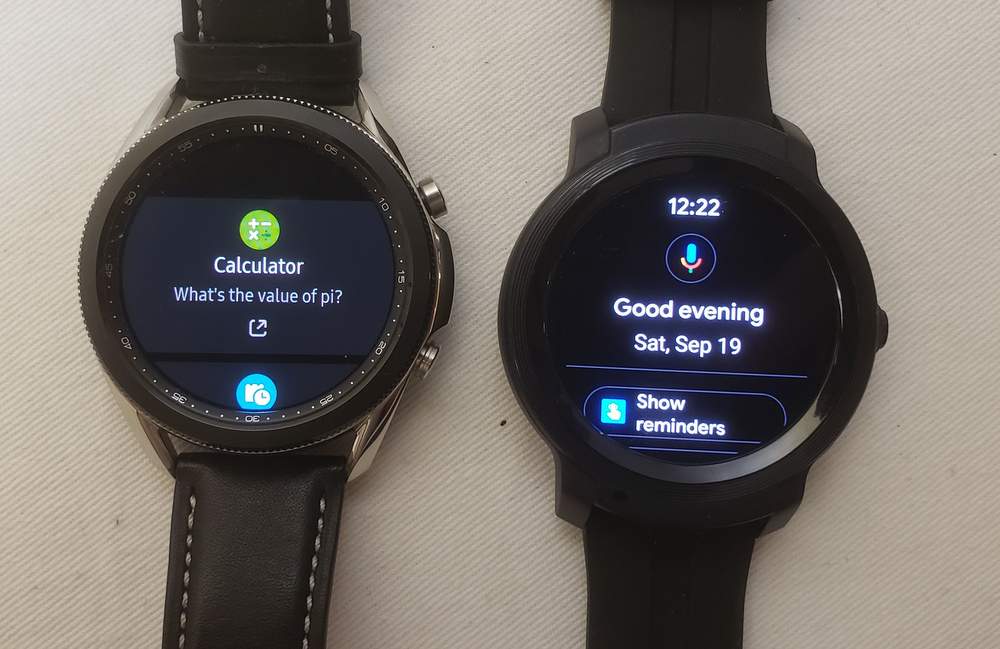 The voice assistant is a crucial part of the utility offered by a smartwatch.

I hate scrolling and tapping in order to set a timer. I might want to know the weather in another city.

At the heart of this is that I really just want to say what I want and get what I want catered to me. I want to live the lives of the one per cent (while being poor).

Samsung offers Bixby to fulfill this need while the Ticwatch E2 has Google Assistant.

Google Assistant is much, much more dynamic than Bixby. For example, let’s say you ask both systems a random question, such as, “What is the capital of Australia?”

Bixby will not be able to give you an answer while Google Assistant will tell you it’s Canberra and show you an image.

Bixby is just much more limited in its functionalities. It also suffers from a poorer speech to text system which means sometimes your queries can be misinterpreted. Painful!

Google is not perfect, but it’s the best you can get unless you get an Apple Watch which comes with Siri. 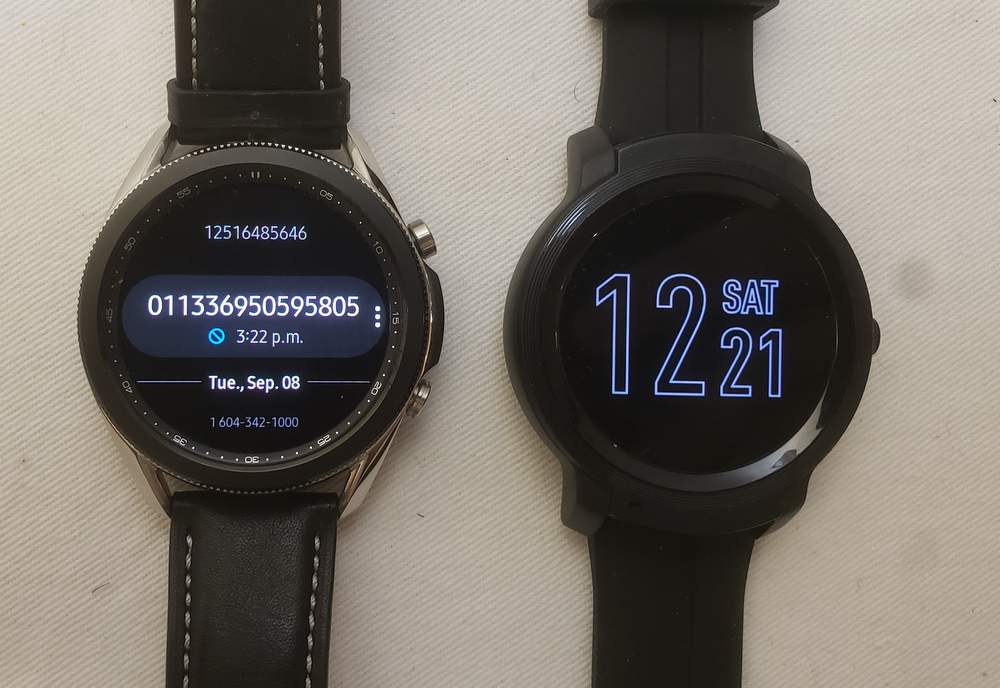 You can make calls with the Galaxy Watch3 but not the Ticwatch E2.

This is an important feature to me because I enjoy the convenience of always being able to pick up calls quickly. Having to hunt for the phone is a bit of a pain.

Like most entry level smartwatches, the Ticwatch E2 does not have a speaker, so you can’t make or answer calls on it although the Wear OS supports phone calls. 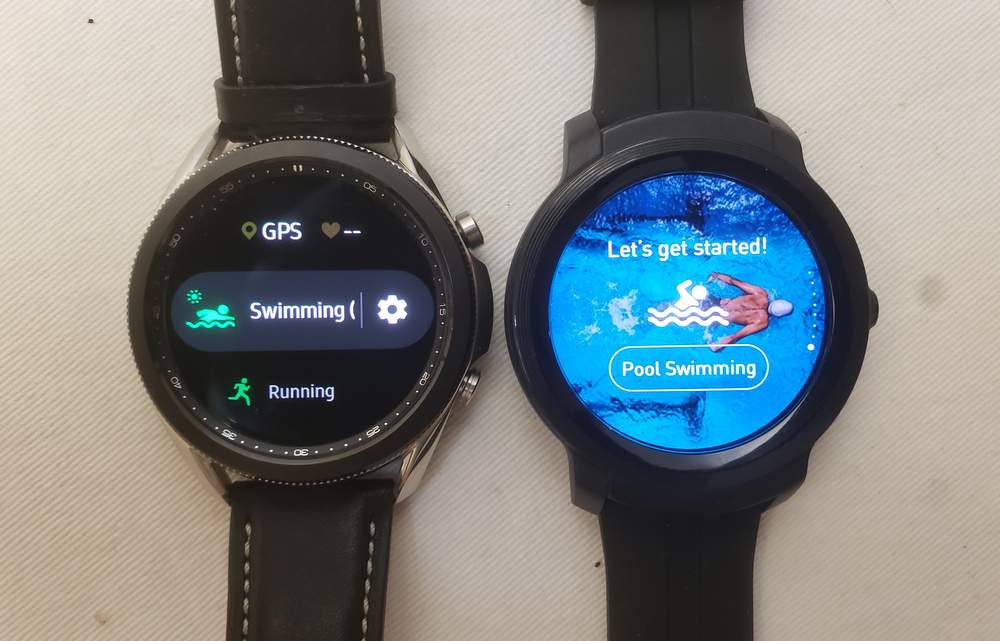 The Ticwatch E2 is marketed as a sports watch for city people. On Mobvoi’s website, you see images of people doing sports like swimming and skateboarding.

The Samsung Galaxy Watch3 isn’t marketed as a sports watch but has some really good capabilities for sporty people.

Both have a reliable heart rate sensor and both are waterproof. That’s a good start.

The Ticwatch E2 comes with two fitness and workout apps, while the Samsung Galaxy Watch3 comes with one that links with Samsung Health.

The Watch3 has much better integration with the corresponding smartphone app as compared to the Ticwatch E2.

In contrast, the two parallel systems on the Ticwatch E2 lead to a bit of confusion. You can use Google Fit or Mobvoi’s own TicHealth/TicPulse/TicExercise.

In my opinion, Google Fit is superior because it’s a great workout tracker that has many more options for workouts.

However, TicExercise has a Pool Swim app that tracks swimming. This does not exist on Google Fit.

So, they sort of complement each other, but remember that data that you track on one app doesn’t get linked to the other.

In essence, what I want to say here is that the software on the Ticwatch E2 works. And the Pool Swim feature is great because typical Wear OS watches do not come with this feature. But they are two separate apps working in their own world.

The Samsung Galaxy Watch3 provides a much better experience. I feel that you would do much better if you care about elegance.

The Samsung Galaxy Watch3 is much more elegant because the smartwatch and smartphone act in unison.

Sleep is not something tracked by the Ticwatch E2 or most other Wear OS smartwatches.

The Galaxy Watch3 also has a running coach function which has pretty advanced features that analyze the symmetry of your footwork, your VO2Max and your overall fitness. These are features not found even in the highest ends of Wear OS watches and the Ticwatch E2 definitely doesn’t have anything like that.

In the end, I prefer the Galaxy Watch3 over the Ticwatch E2. The Samsung Health app is just a joy to use because it’s so much more comprehensive and integrated. The Ticwatch E2 is a bit of a disjointed experience although in its defence, “it works”.

I feel great when I wear the Samsung Galaxy Watch3. It looks great and it functions well with my Samsung phone.

Only thing — I hate the price. And having a more comprehensive view of smartwatches, I feel that the Galaxy Watch3 presents quite poor value. Its predecessors are close in functionality.

But when placed side-by-side with the Ticwatch E2, I find that this is even more emphasized. The Ticwatch E2 provides great functionality at a great price. It’s a good entry level watch that can do most things the Galaxy Watch3 can.

In fact, there are some software features that are plain superior.