The differences are blurring as Samsung creates another smartwatch. Does the Galaxy Watch3 have any redeeming features over the Active2? 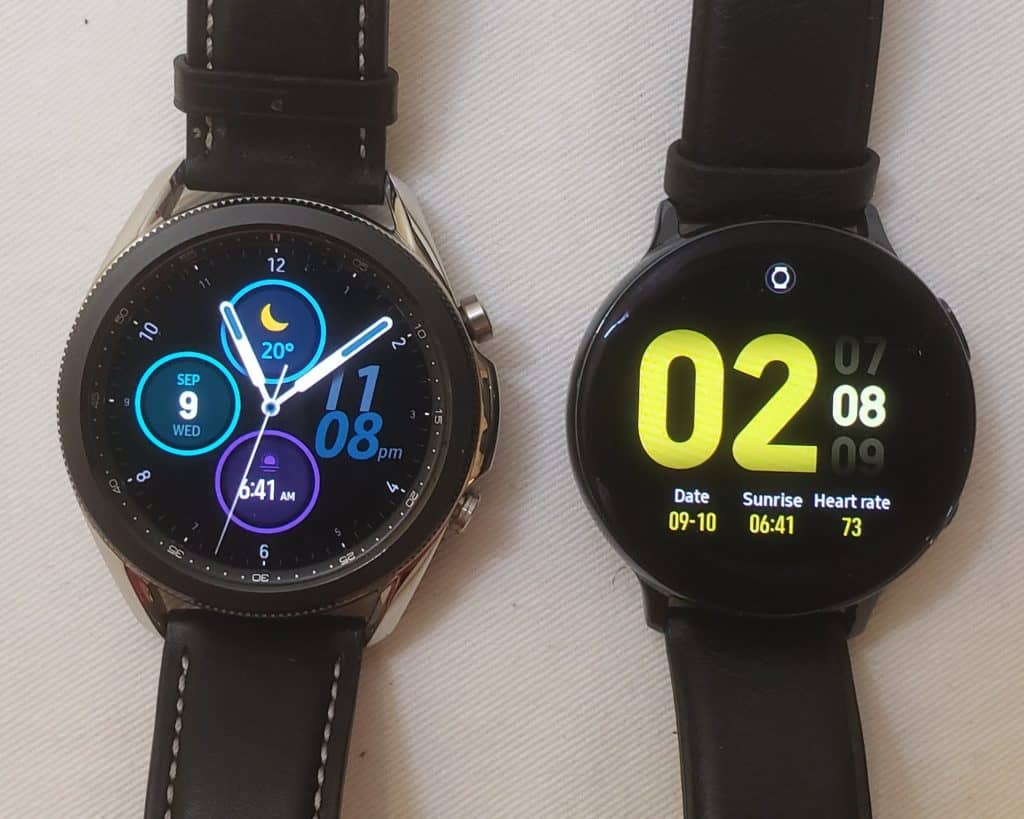 On the whole, Samsung makes great smartwatches and I believe they will continue to do so.

My first Samsung smartwatch was the Samsung Gear S3 Frontier. It was a great watch with the rotating bezel. The bezel is an amazing Samsung innovation.

The differences started blurring. The more Samsung watches I receive, the less I can tell which one is which, beyond the external appearance.

And so now I’m in a tight spot. I am hard pressed to find any differences between the Samsung Galaxy Watch3 and the Galaxy Watch Active2.

So let’s start with the most obvious difference: the exterior 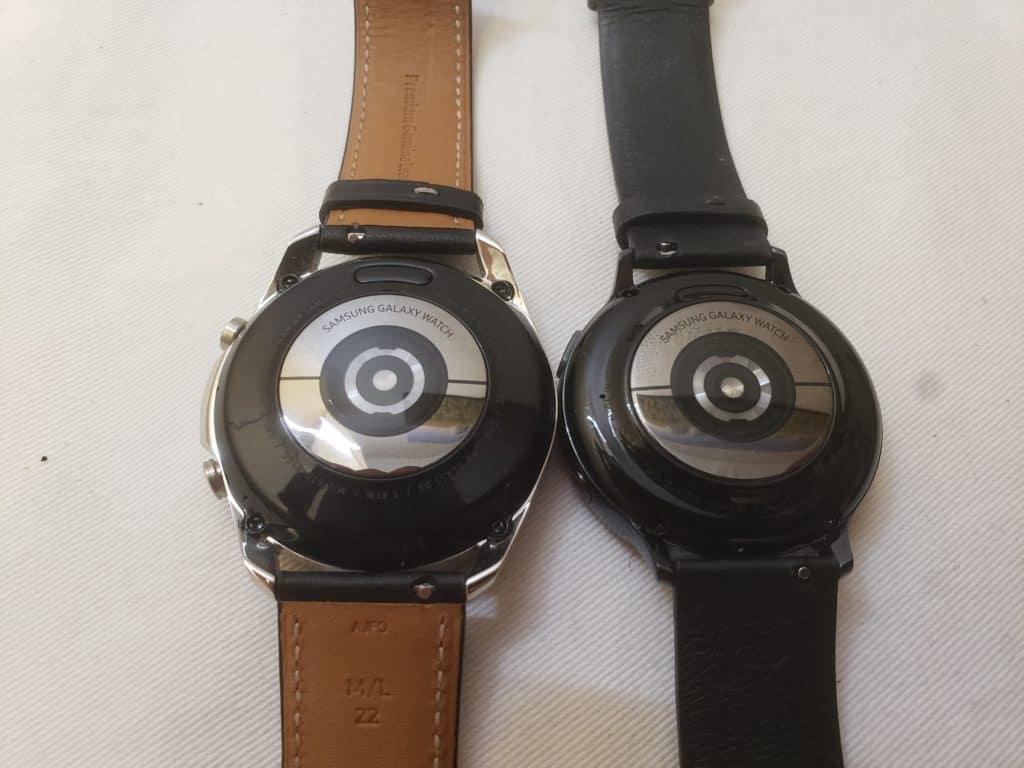 Judge a book by its cover

The most obvious difference between the Galaxy Watch3 and the Active2 is the watch case and bezel.

The Galaxy Watch3 keeps the traditional rotating bezel that really represents one of the biggest smartwatch innovations.

The reason why I think it’s very innovative is because it really helps you navigate stuff with a very high level of precision.

Other smartwatches usually have a crown which you can rotate to navigate menus. They are better than swiping, but can be very inaccurate because of how a small movement of your fingers leads to a much bigger amount of scroll. Samsung’s bezel is much more precise. 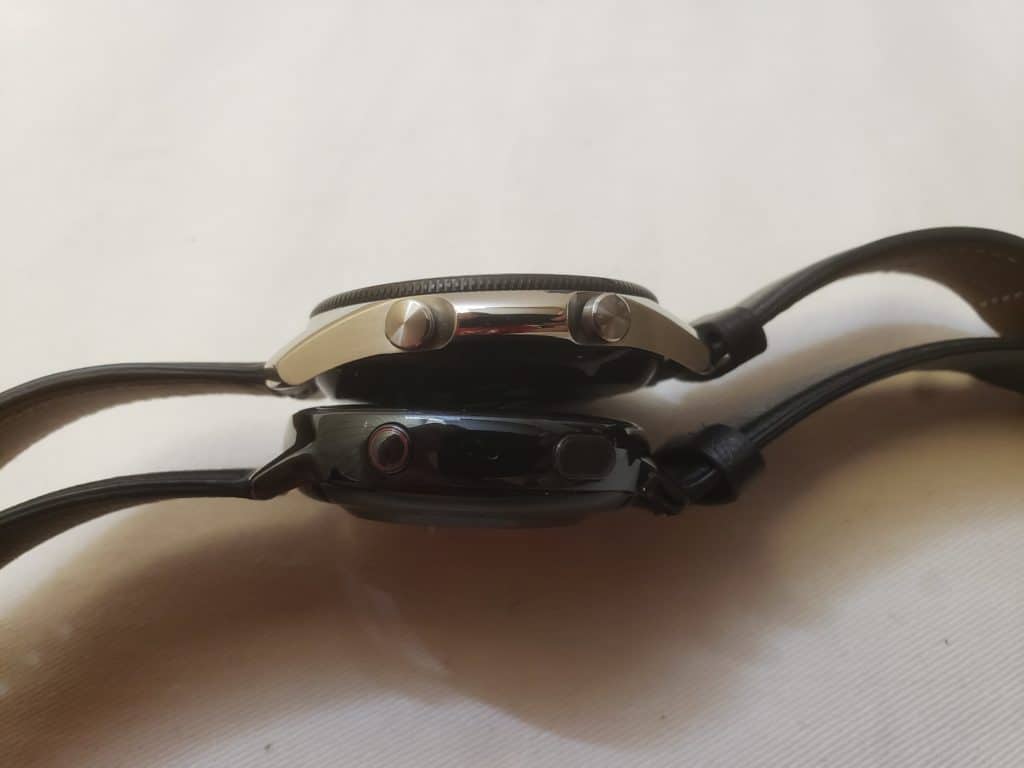 The Active2 does not have this rotating bezel. It gave me the Pikachu shocked face when I first saw it. It was a departure from tradition.

I mean, all high-end Samsung smartphones have this curved edge screen and I am glad it’s also available on the Active2. The Apple Watch Series 5 also features this design feature.

In the absence of a bezel, Samsung implemented a “virtual bezel.” What that means is that you can now move your finger around the circumference of the Active2’s screen and it will mimic the rotation of a bezel. It’s OK but definitely not as good as a real bezel.

Hidden features of the Watch3

There’s one big problem when it comes to the Watch3.

The Watch3 can measure many metrics including oxygen saturation (SpO2), it can function as an ECG and it can also measure stress.

But none of those are available at the point of writing here in Canada.

I was a bit bewildered how come there was a stress meter on Samsung Health on my smartphone but I couldn’t find a way to get a reading on the Watch3.

Ouch. As far as I know, they will be unlocked in the future.

But that presents one problem for Samsung… why should I pay the extra money for a new watch when the old one is very similar?

There are so many similarities between the two, that I question if the Watch3 offers much value. Let’s list them. 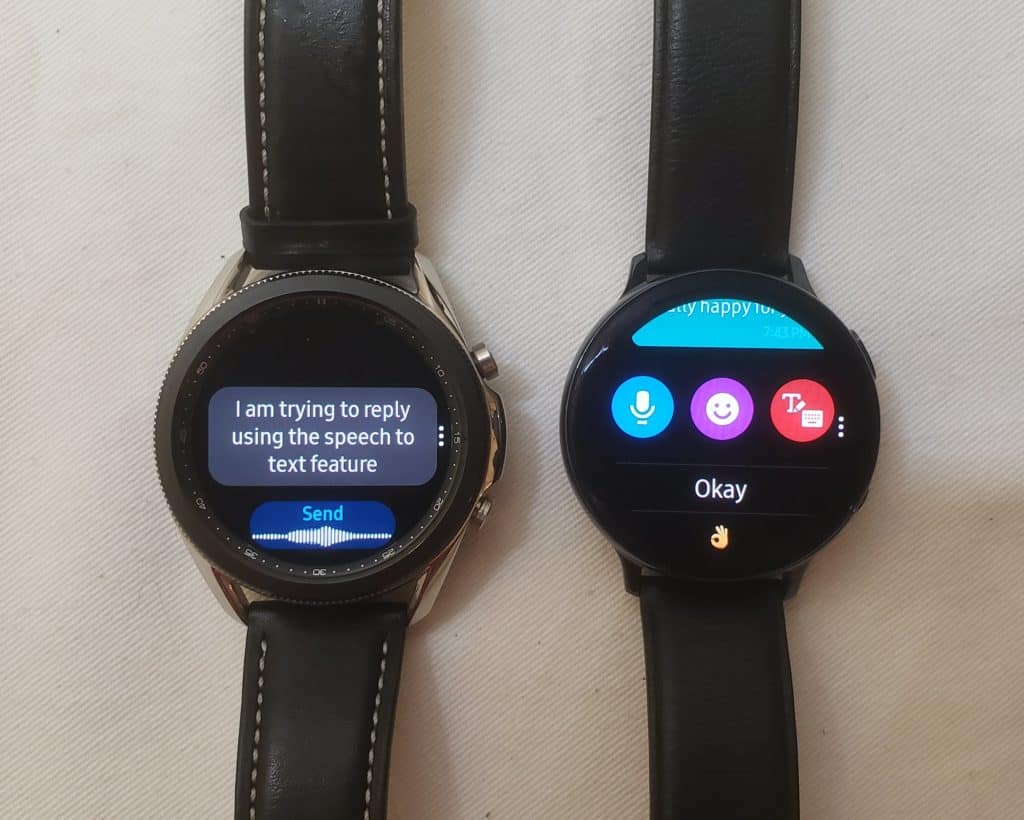 Speech to text is a very central function on smartwatches because they make life a lot easier. Or a lot harder.

Why is it important? Let me give you an example. Your phone is in a hard-to-reach place such as deep in your bag and you need to reply to a message. While the Samsung Tizen OS offers some other methods including using a numberpad keyboard, a pre-composed reply or drawing letters to form words, the speech to text method is the fastest,

In Samsung’s case, I fear it actually can’t keep up with Apple or Google.

If those are the gold standards of speech to text, then Samsung pales in comparison.

In terms of accuracy, I would put my money on Apple or Google’s speech to text abilities. They’re not perfect but they’re the best.

Samsung is likely to result in more failed attempts, which means you will likely have to dig to find your phone. Annoying! 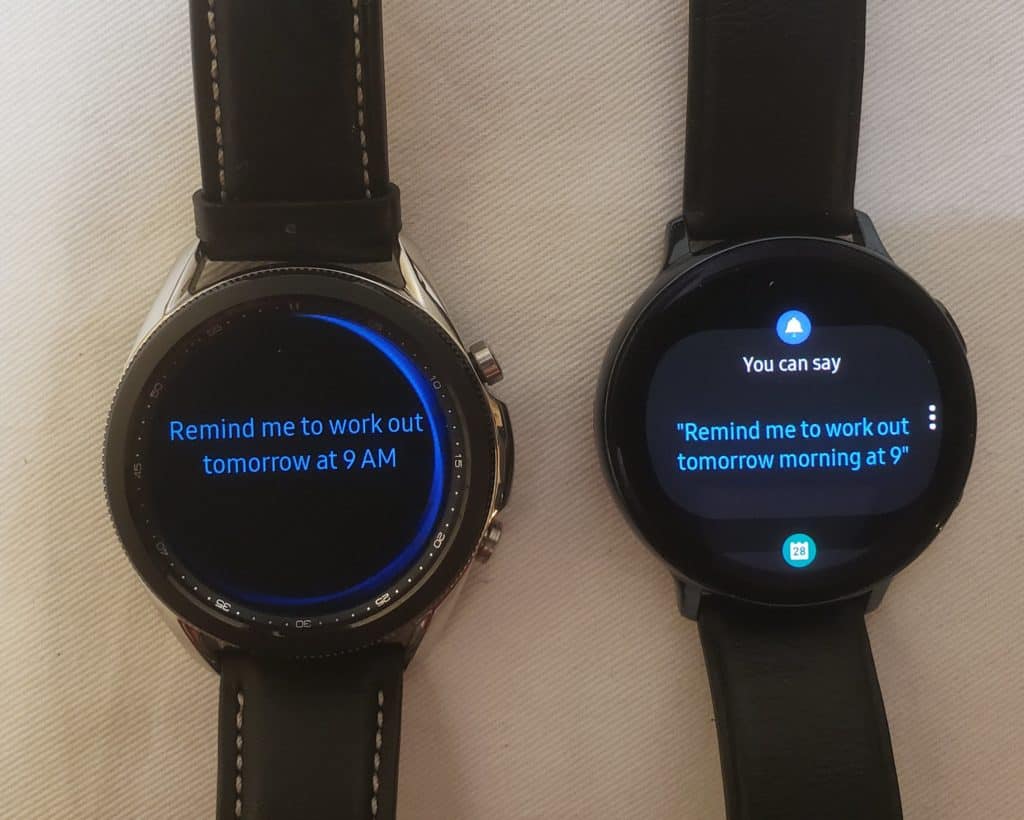 On the whole, Bixby is not a bad voice-activated assistant.

The issue is that Bixby uses the second-rate speech to text function that really harms its accuracy.

It has gotten a bit better over time. I remember the bad old days when it couldn’t tell the difference between “four” and “for” when I said “timer for four minutes”. I was cooking pasta.

Again, if the voice assistant fails, you are then forced to do things manually. Or in my case, I just pick up my phone and use Google Assistant instead.

Bixby does have some severe limitations, though. For example, if you asked Apple’s Siri and Google Assistant a random question like, “Where is the capital of Australia?” Both will search the web and give you a result.

Bixby won’t. Bixby will tell you it can’t do it.

I have to say, both Galaxy Watch3 and Galaxy Watch Active2 have well designed watch faces. 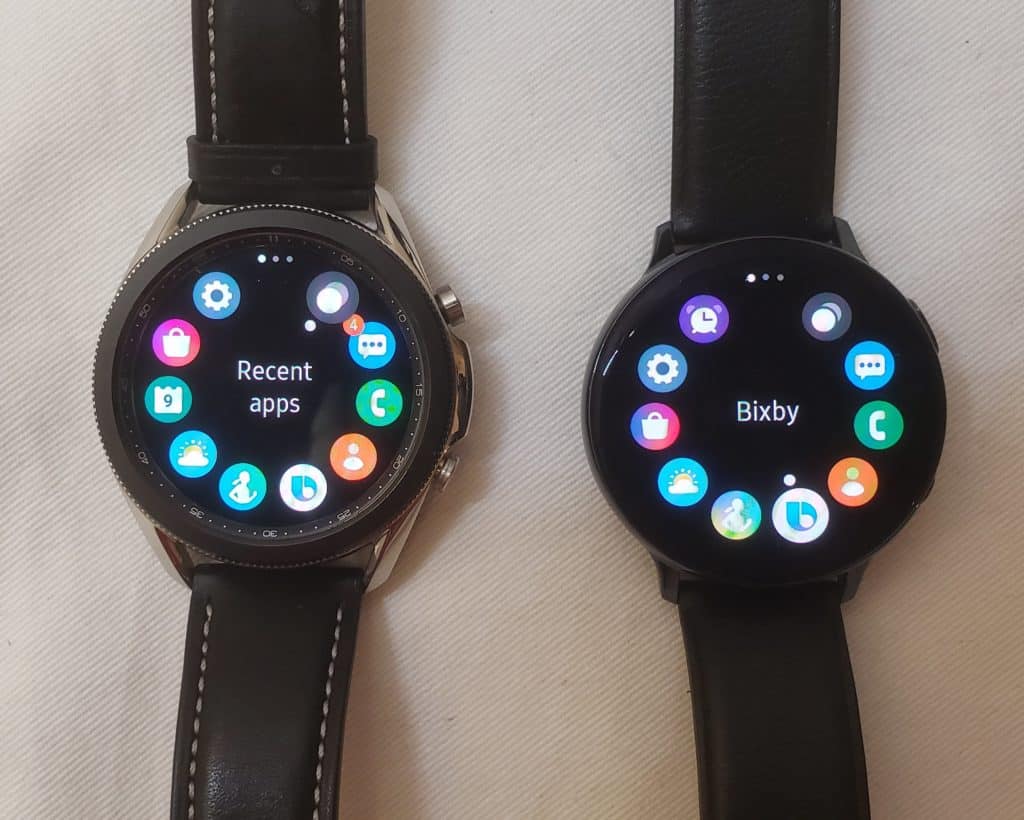 The apps that both watches come with are great, but the Galaxy Store isn’t.

The problem with the Galaxy Store is the small number of apps available. I suppose it doesn’t have the same number of users as the bigger app store from Google’s Wear OS or Apple’s App Store.

So, that leads to an issue if you want to find a maps app. On the Wear OS, you have Google Maps and on Apple you have Apple Maps.

But luckily, I find that the Tizen OS apps are pretty good. The music app is good because it allows you to switch music providers easily.

Samsung Health is especially impressive. It’s one of the most comprehensive health and lifestyle apps out there. It’s definitely better than Google Fit and puts up a good challenge against Apple’s WatchOS’s Health and Workout apps.

One of the more impressive features available is the running coach function which helps you optimize your running and also functions as a pacing coach according to a target you set. 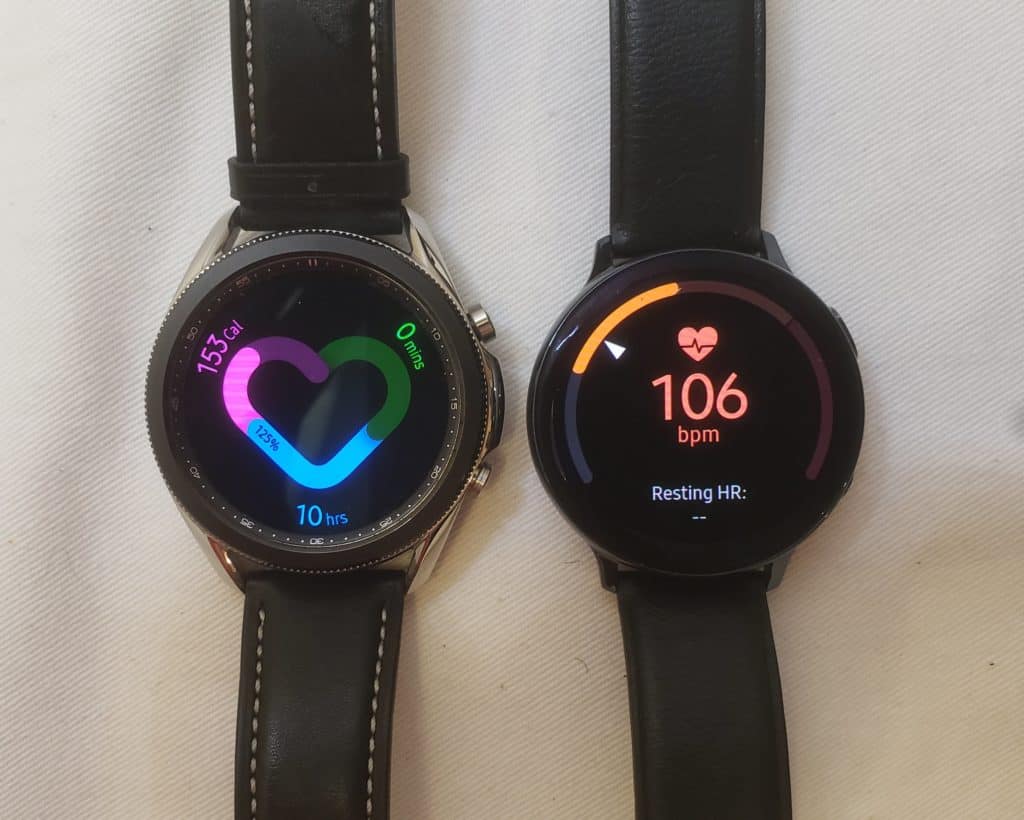 These two watches are so similar that I can’t say I’d recommend one over the other.

Except in two areas.

Are you flush with cash? Then choose the Galaxy Watch3. It is the latest and greatest. It has a very useful bezel and once Samsung enables some of the health features, you’ll be able to see deeper analyses of your health.

But another crucial question is whether you like the look of the Galaxy Watch Active2. The loss of a bezel makes for a much more modern looking smartwatch, in my opinion. But looks are very subjective. You also get most features at a better price.